Greetings from Birmingham-on-Sea! In the past week we’ve had more monsoon rain, the kind that turns streets into rivers. Between the downpours there’s good old-fashioned English drizzle, then proper rain, then more drizzle, then… let’s just say that it’s wet.

Wet means two things: bigger veg and, inevitably, bigger weeds. All the plants have grown noticeably this past week, particularly the sunflowers, which now reach the top of my thigh, and the courgettes, their bright trumpet flowers flattened by rain and splattered mud. The wet weather has brought on the competition too and the ground is carpeted with creeping weeds – I can’t tell you their names, though some of it looks like ground ivy, and of course the buttercups are rampant. I spent a soggy hour this morning pulling them out the best I can, caking my fingers and nails with the sticky earth. 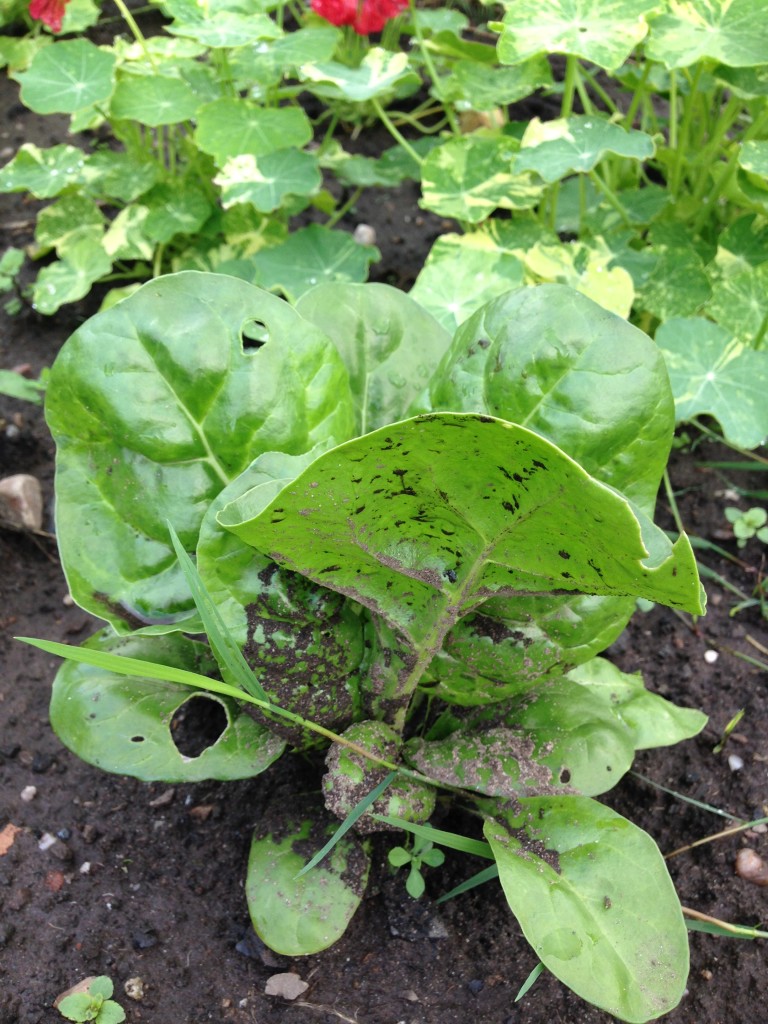 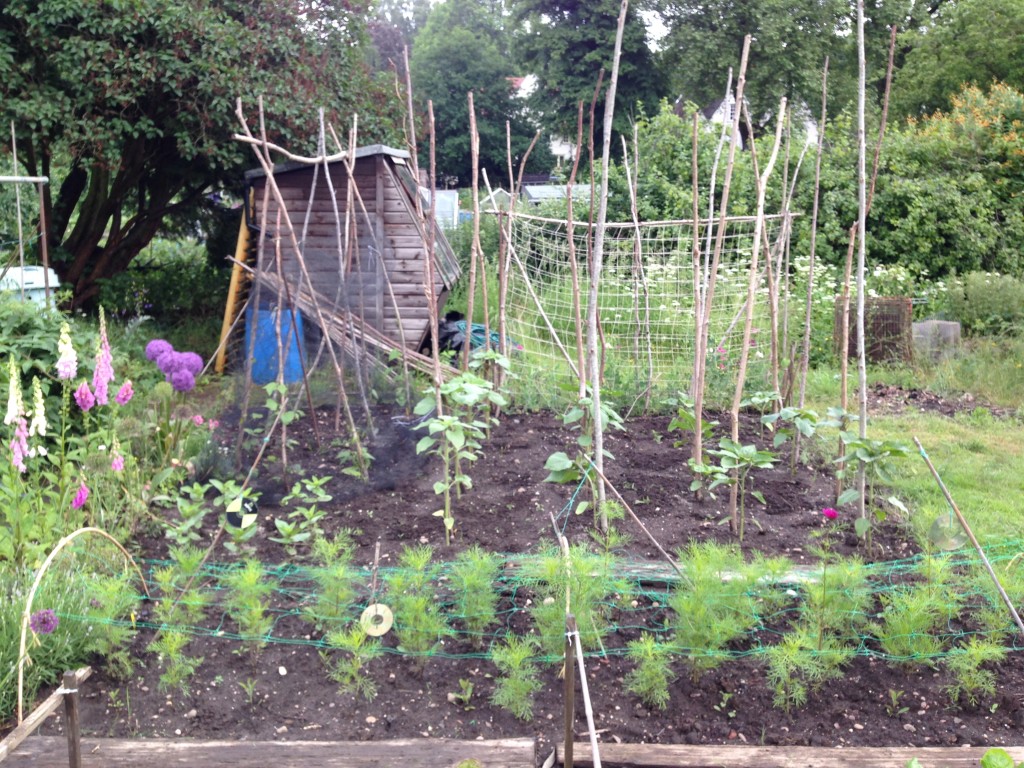 The cutting patch is shooting skywards, particularly the sunflowers

The larger plants are loving the water, but not so those high-maintenance carrots. After proudly showing off the seedlings last week, today they have all but disappeared. Rotted? Eaten? Destroyed by the rain? Who knows. Their absence means that I now have a 1m square patch of empty land going spare. Room for more flowers! 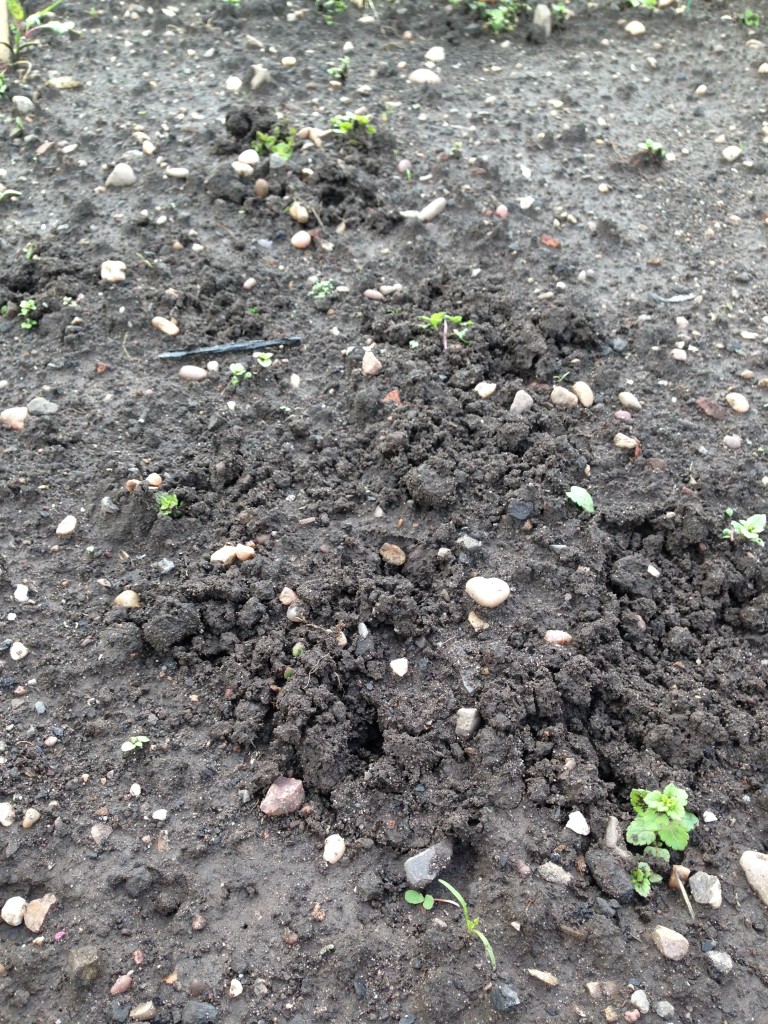 Oh carrot seedlings, where have you gone?!

In the greenhouse, we have fruit set on the tomatoes, though in truth there’s a heck of a lot more leaf than fruit – the plants will need a trim soon to let the light in. Nestled underneath the vines is the experimental radish-in-a-drainpipe sowing, which has proved to be a great success. Those (supposedly easy-to-grow) seeds that refused to germinate in the ground have swollen into gobstopper-sized pink beauties undercover. 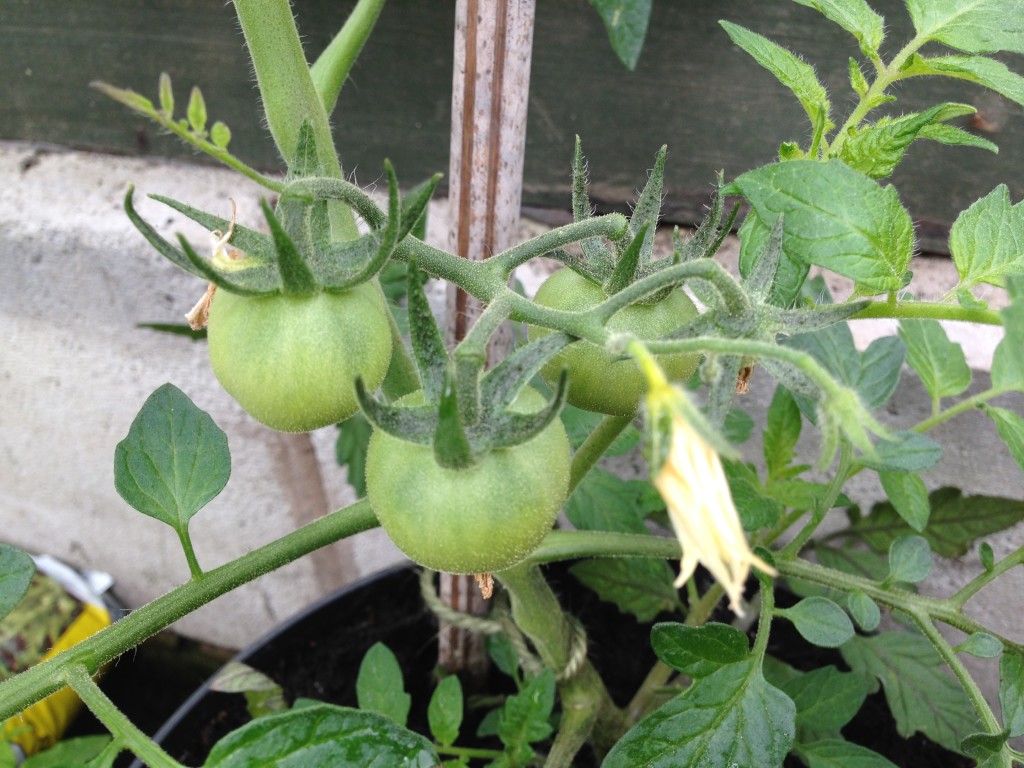 In the greenhouse, we have fruit set on the tomatoes! 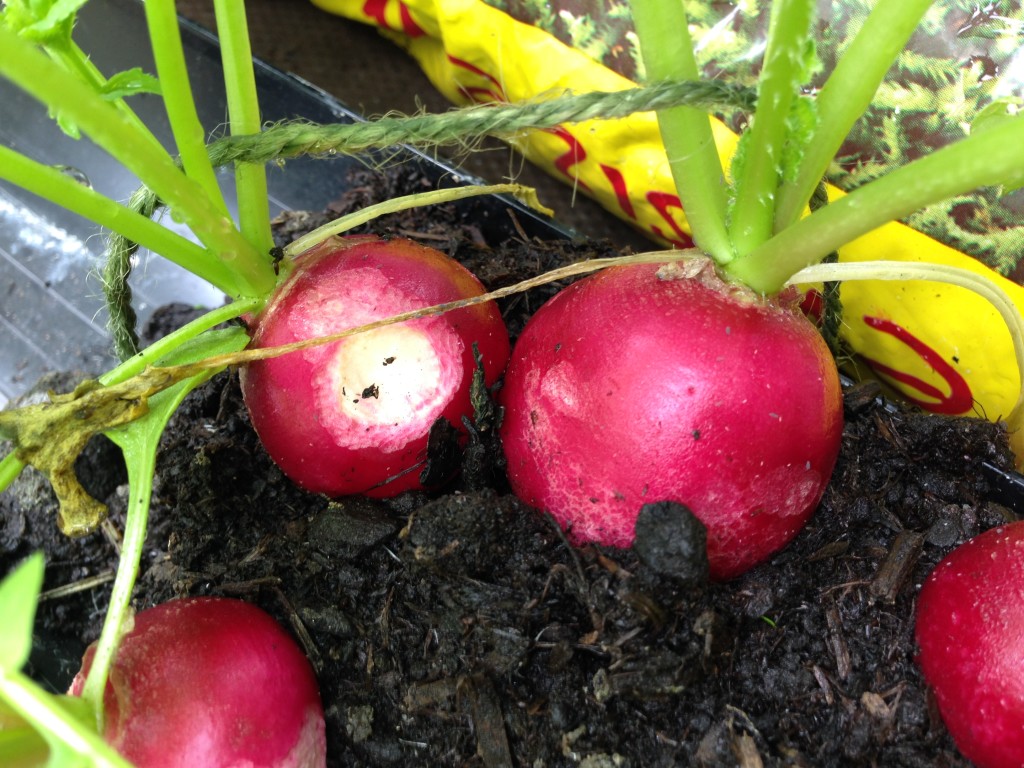 Something thought about nibbling the monster radish, then decided against it when it got to the peppery bit. Sucker.

The first modest pickings of the season are coming through – sweetpeas, spinach, chard and the first baby courgette. Strawberries too, though they are sour and I fear that the delicate fruits will rot with all the damp. Within a week the cutting patch will catch up, with calendula, cosmos, cornflowers and nigella on their way. 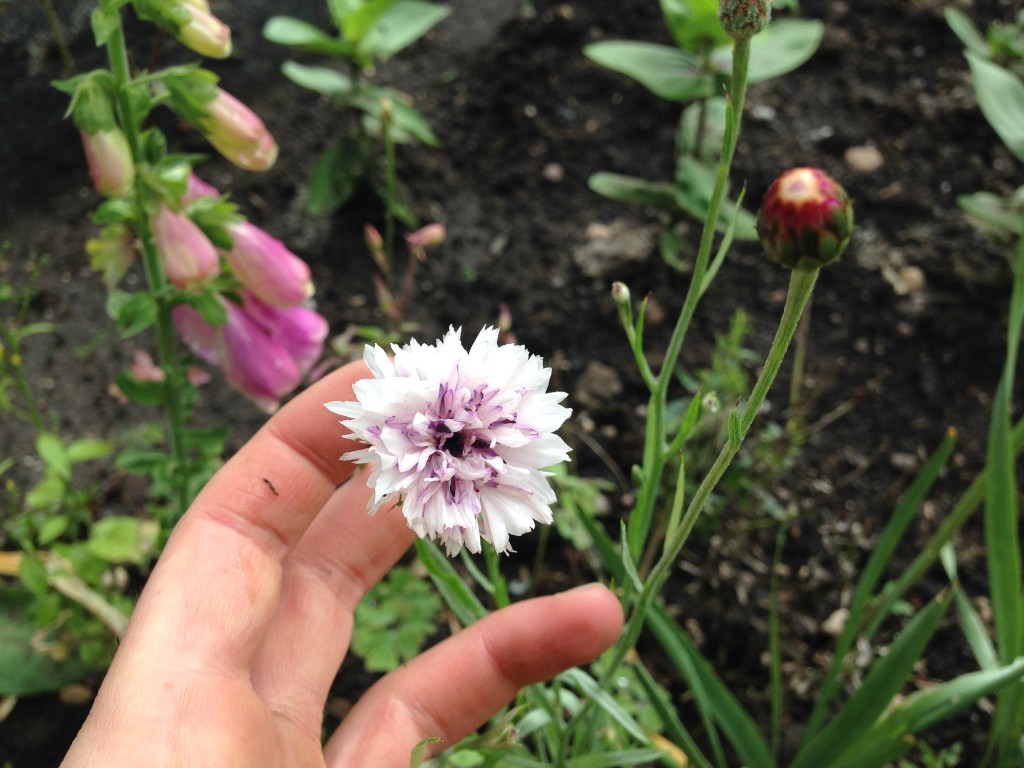 One of the first cornflowers is in bloom 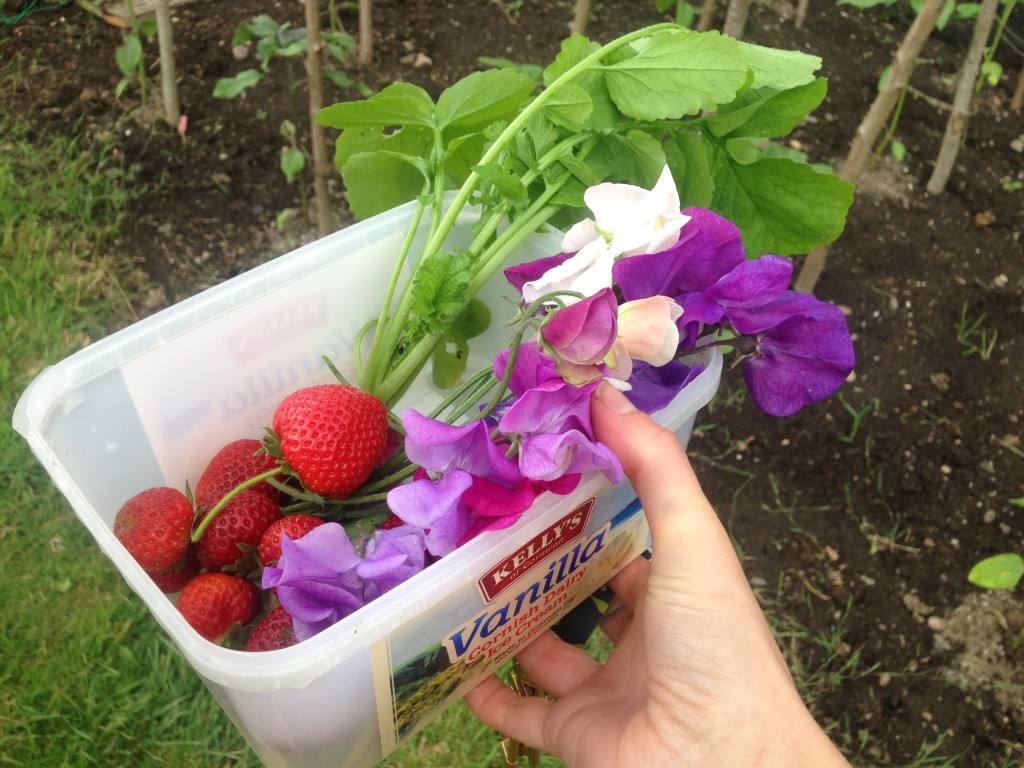 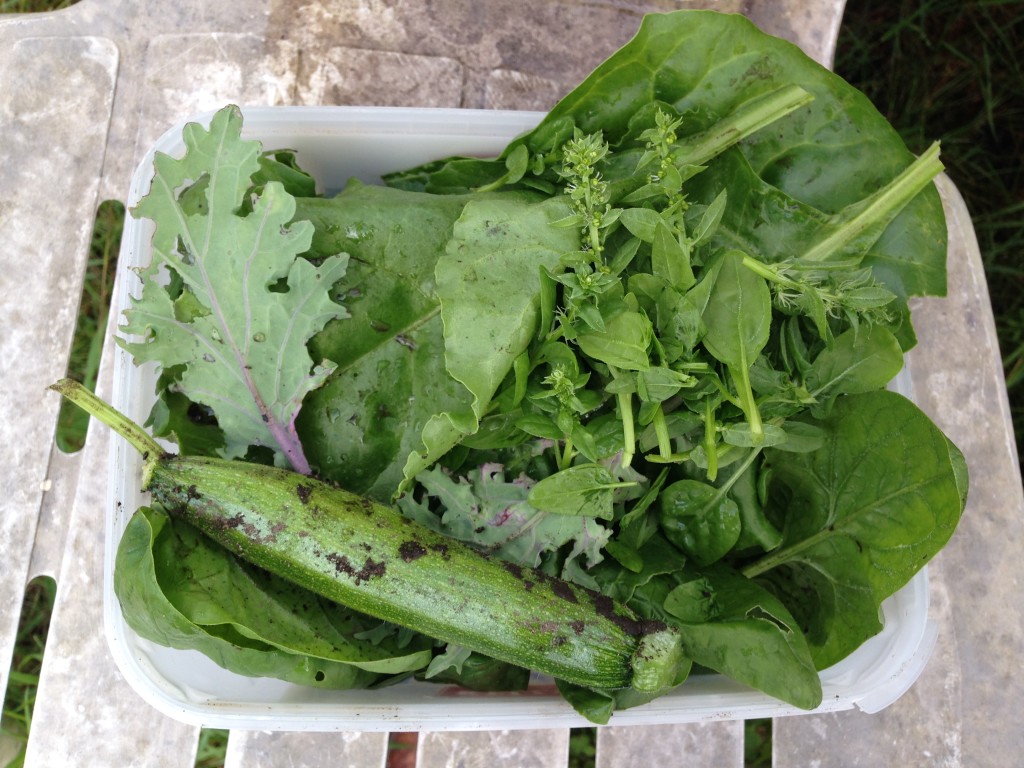 …and spinach, kale and the first baby courgette

The issue now is finding the time to give this produce the full attention it deserves. Moving house has destroyed my kitchen creativity: with a new kitchen to get to know and a million things to do, it’s easy to default to the classic summer suppers of omelette, salad, bread…but produce this fresh and vital shouldn’t be a kitchen after-thought. Recipe suggestions welcome.