Every so often I bump into someone who’s seen my allotment pictures on Instagram (@helenstallard) and they’ll say something along the lines of ‘wow, your veg is so much better than ours’! And of course I nod and smile but really it’s a big fat lie. Like everyone else I’m guilty of accentuating the positive and forgetting to record all the times that I cock up. So in the spirit of fairness, and as a learning exercise for future allotmenting, here are the Allotment Issues of 2018. There are many.

The area at the back of the plot has always been a bit of a wasteland but this year it has reached new (literal) heights. There are stinging nettles in there that are taller than me, brambles as thick as my arm. Well that is maybe a slight exaggeration….but this is not a good situation. The compost bin is pretty much inaccessible now, and bindweed is strangling the rosemary. It needs a day or two of determined effort to sort it out, but I have neither days nor determination. 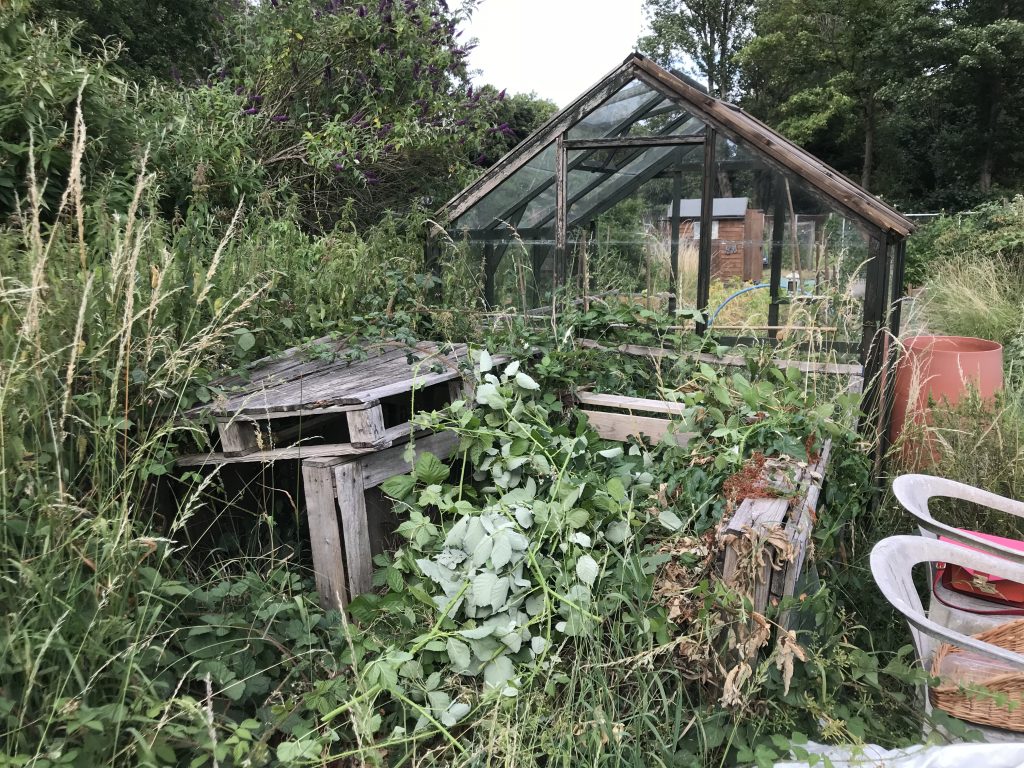 The dilapidated greenhouse and compost bin is overrun with grasses, bramble, nettles and bindweed 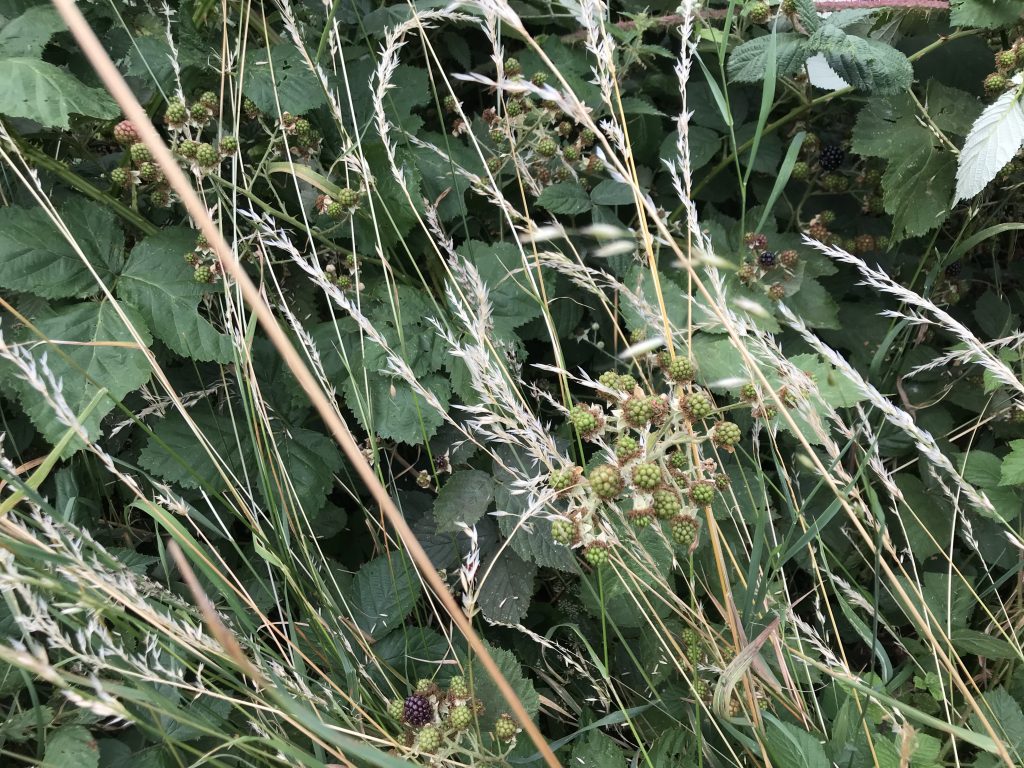 but at least we’ll get some bonus blackberries this year

I get blossom end rot every year and am resigned to it, but this year we have a new tomato-based calamity. The tiny fruits are shrivelling and turning black whilst still the size of a large pea: rot has set in. I don’t know what’s caused it but suspect it’s the difference between soaring 40c daytime temperatures and overnight chills (I don’t close the greenhouse door at night, don’t have the opportunity). I’ve lost about 50% of the crop to this. Very irritating. 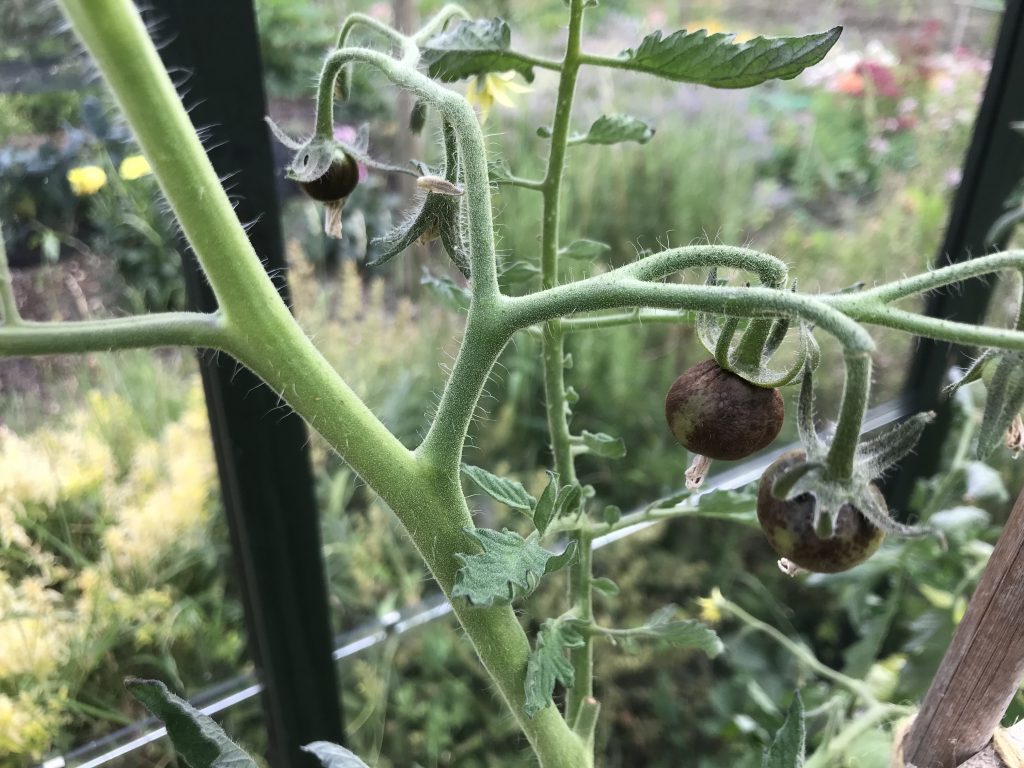 50% of the baby tomatoes have turned shrivelled and black

The runner beans have grown, which is in itself a miracle, but are now covered in black fly. These little critters are sucking the plants dry and seriously reducing the crop. There’s too many for predators to keep at bay and I won’t spray a crop that we’re going to eat, so I don’t think much can be done. 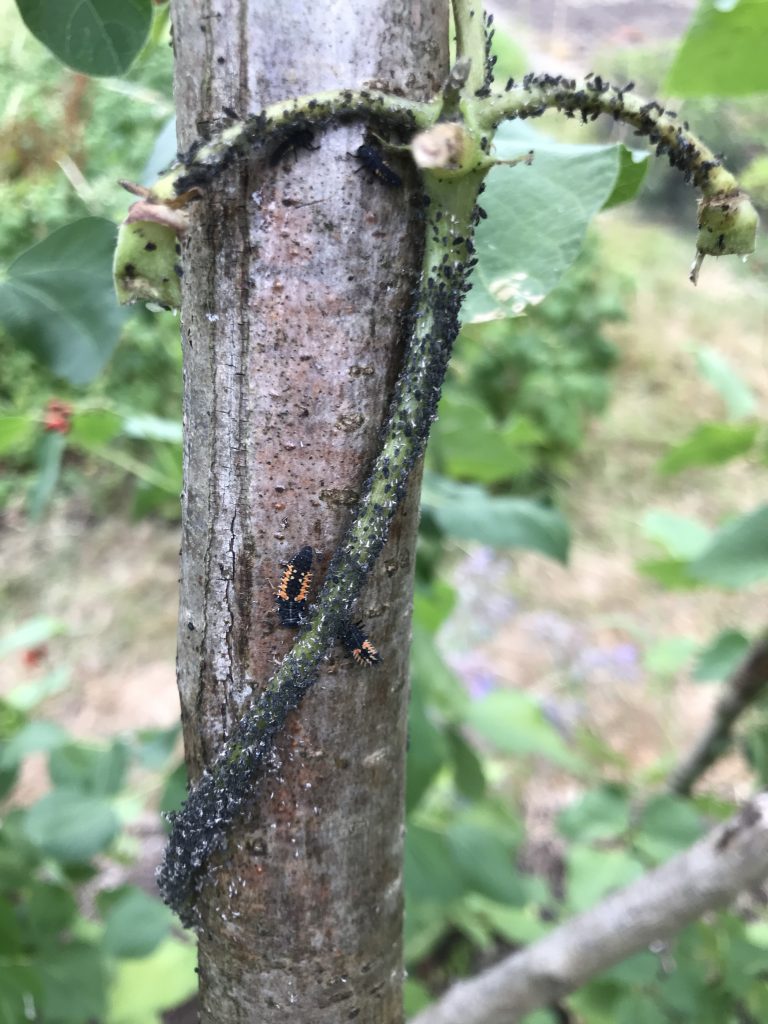 Infestation of blackfly on the runner beans

In fairness this isn’t entirely my fault, but the cosmos and other cut flowers aren’t thriving in this dry hot summer. I’m giving them a weekly water but it’s not enough; in previous years we’d have 5-foot bushes of cosmos by now, humming with butterflies and bees. These were all grown from seed but the first lot were thinned carefully and planted out as sturdy individual plants (my Mum did this, obvs) whilst the second ones – mine – were planted two seeds to a pot, didn’t get thinned (I forgot) and got planted out when still a bit too small. They are beyond crap. Next year I need to try harder. 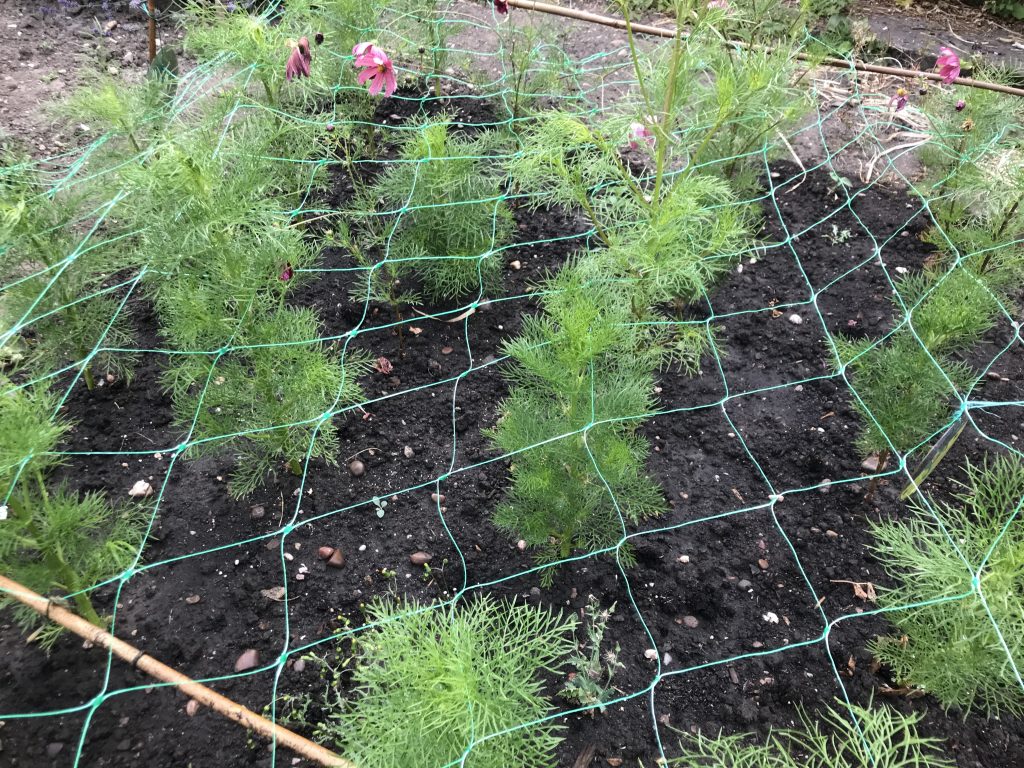 These cosmos are taking ages and ages to flower… 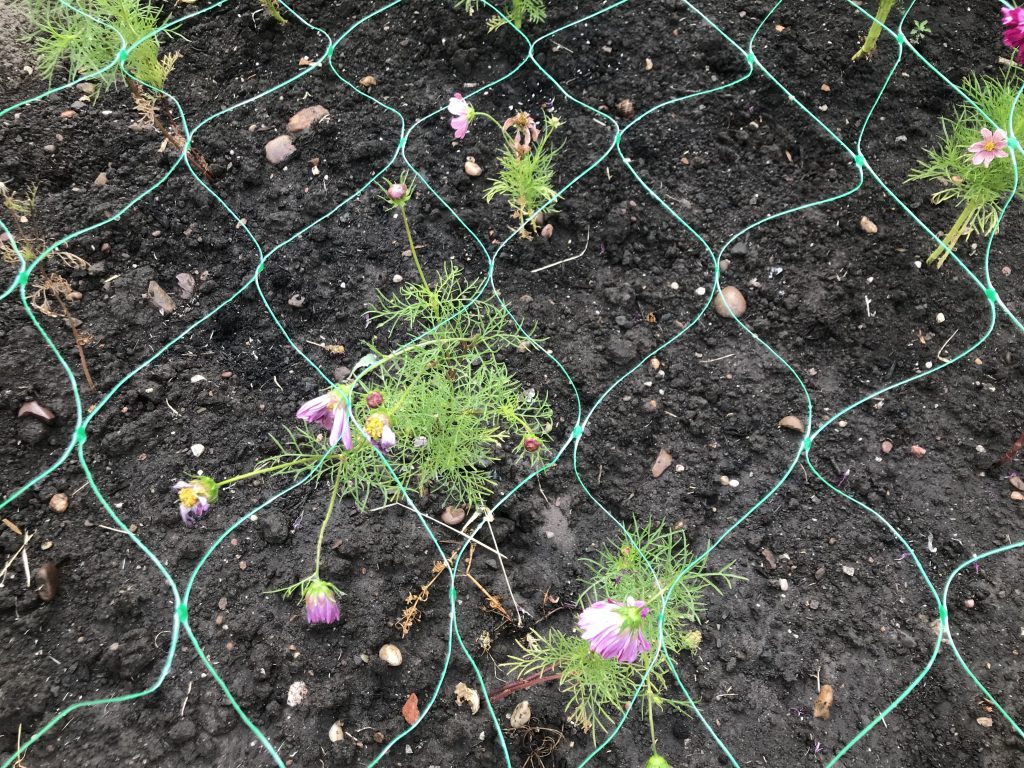 …but at least they’re healthy, unlike these ones

I also tried some Bells of Ireland this year. Once again they were planted out waaaay too early, and then nearly got hoed as I mistook the seedlings for weeds. So survival is in itself an achievement – but they should be loads taller than this. 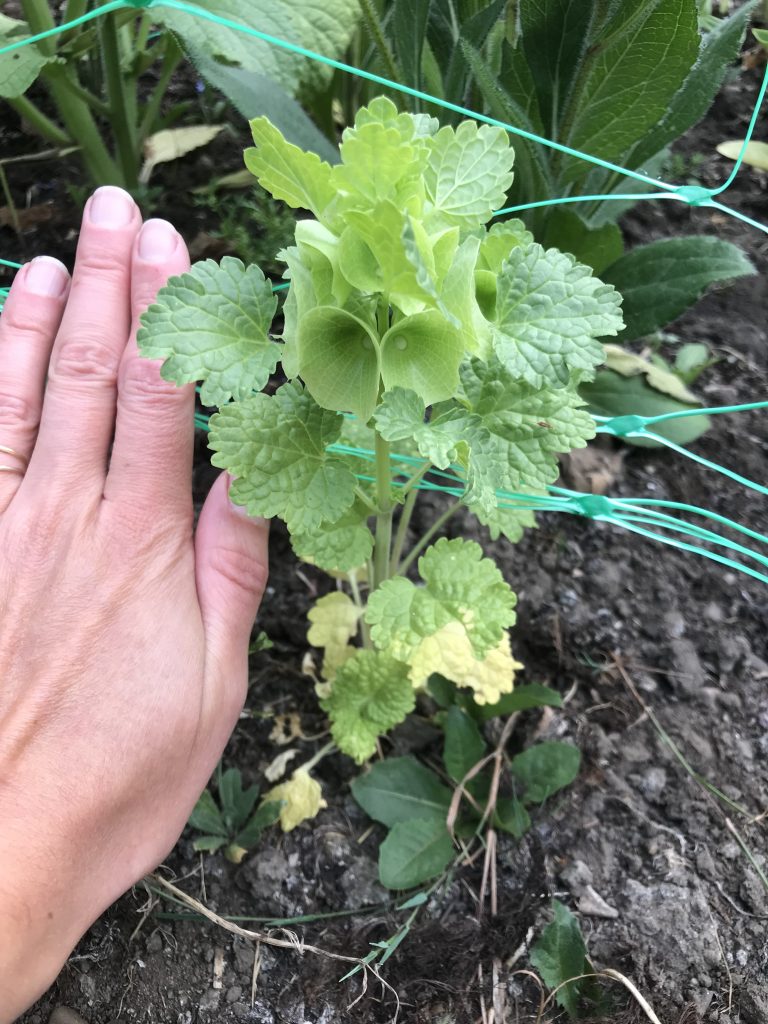 The Bells of Ireland should be calf-height, but they’re about the size of my little hand

The cornflowers are also stunted, and the chrysanthemums don’t look especially healthy. I’m not sure what the problem is/was. Maybe all the chi chi English cut flower growers that I follow have these issues too but also choose not to share them on Instagram?

In previous years I’ve filled massive cake-tins with blackcurrants, redcurrants, raspberries and strawberries but this summer the harvest is poor. In particular, I’ve got a mere few hundred grams of blackcurrants. I’m wondering if these old grand dame bushes are nearing the end of their life – they must be at least a decade old. Must look it up. On the plus side, we do have gooseberries for the first time this year. 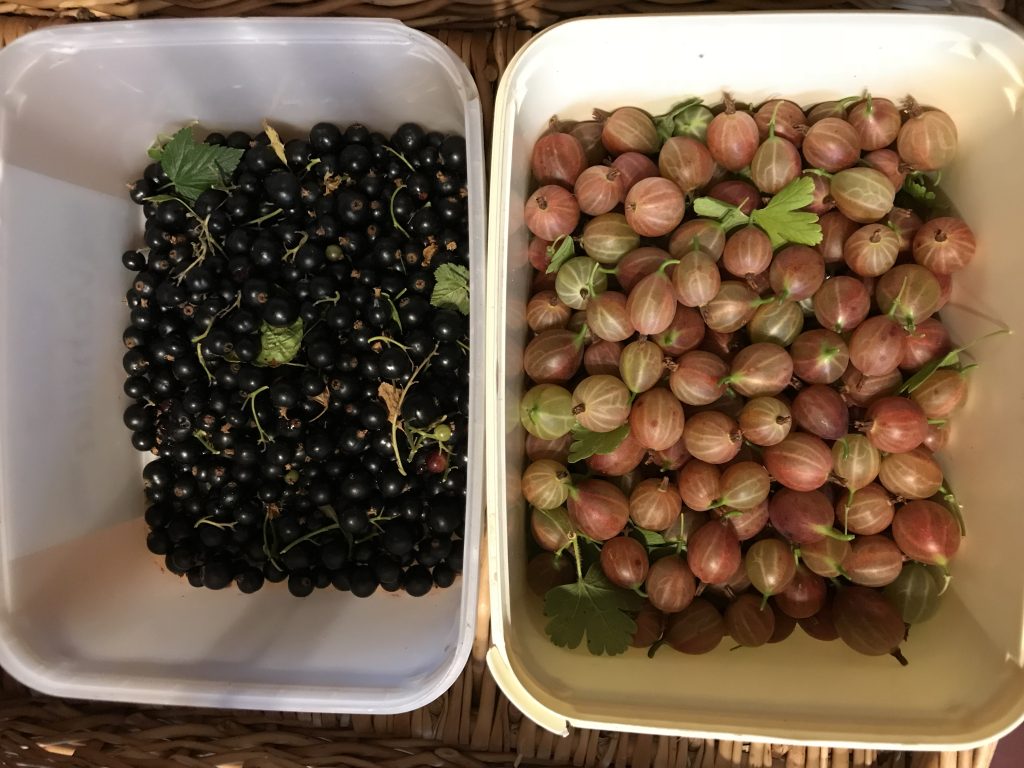 This year’s blackcurrant harvest is pitiful!

This is by no means the end of the cock-ups. I’ve not even mentioned the back garden that looked good during May and June, and then – paradoxically – seems to shrivel and become a jungle at the same time. But I have come to understand though that it’s in the mistakes that you can actually learn. Planting errors are an opportunity to find creative solutions and new planting schemes. Bug infestations are an opportunity to get a closer look at nature. They all teach you to let go, little by little. Life lessons on the allotment.

One thought on “All the things I’ve messed up”