No summer holidays for us – no cash – but we do have our National Trust membership to fall back on. The past few weeks have taken me to Croome Court, Packwood House, Baddesley Clinton and Biddulph Grange – and each visit has given new ideas for both the allotment and our newly-acquired back garden.

When the National Trust began back in the 1880s, its co-founder Octavia Hill was on a mission to provide green-spaces for put-upon urban dwellers…and as I wandered around the late-summer borders at Baddesley yesterday, I smiled at how her intentions are still coming good, over a century later. I think it’s fair to say however that our pal Octavia wouldn’t have taken Argentinian-style snacks with her on her countryside visits. The Olympics have inspired Matt to do some South American cooking and his pasty-sized empanadas made for great picnic food. 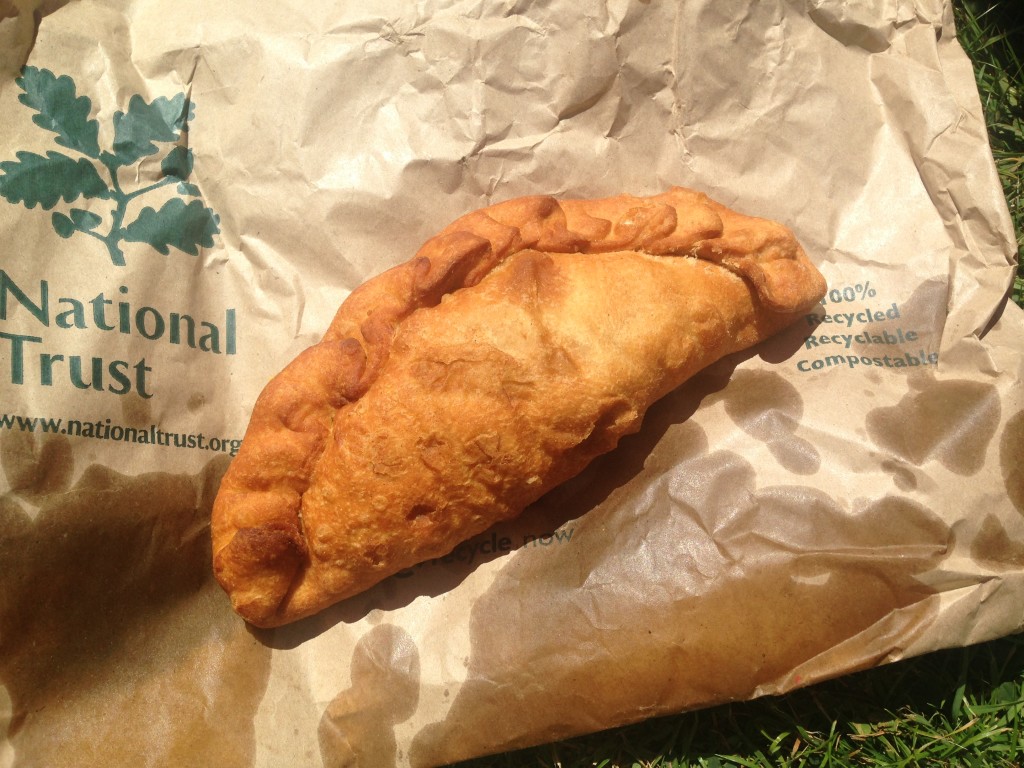 Today’s post is nothing more than a pinning of ideas that I like so that – hopefully – they can inspire my planting next year. I don’t even know what some of these plants are called so I am hoping that my mum will come to the rescue. At Packwood, the borders were filled to the brim with sky-high hot-colour plants. I spotted lilies, sunflowers, agapanthus and dill, off-set with green foliage and grasses. 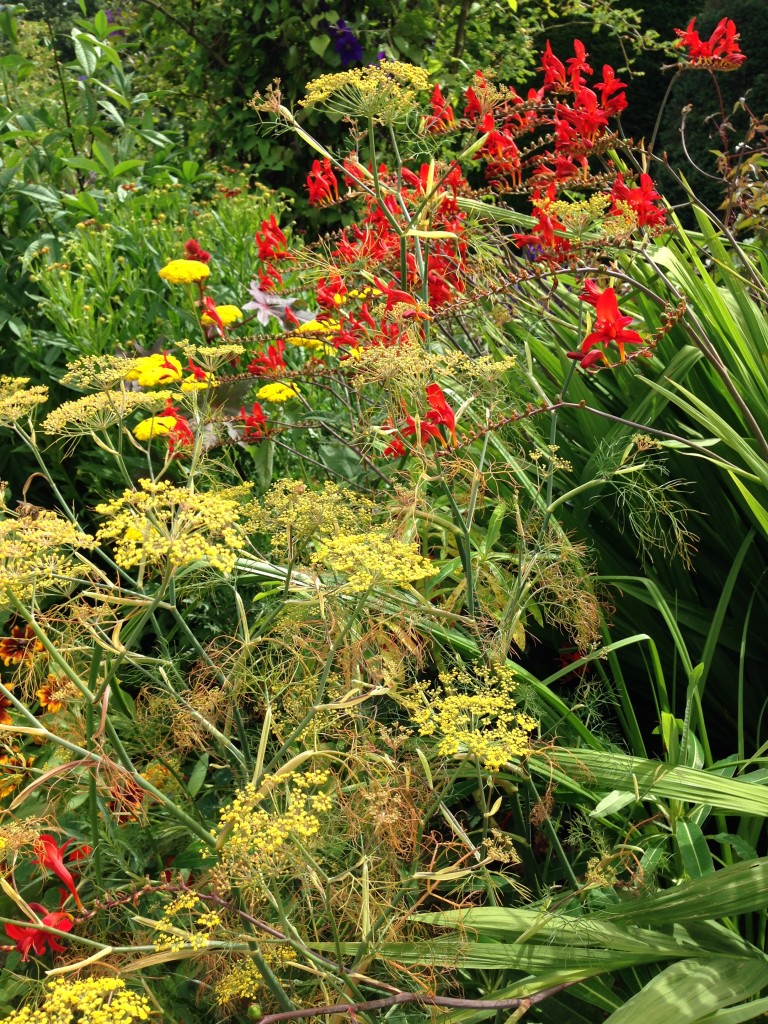 I love the hot red against the acid yellow 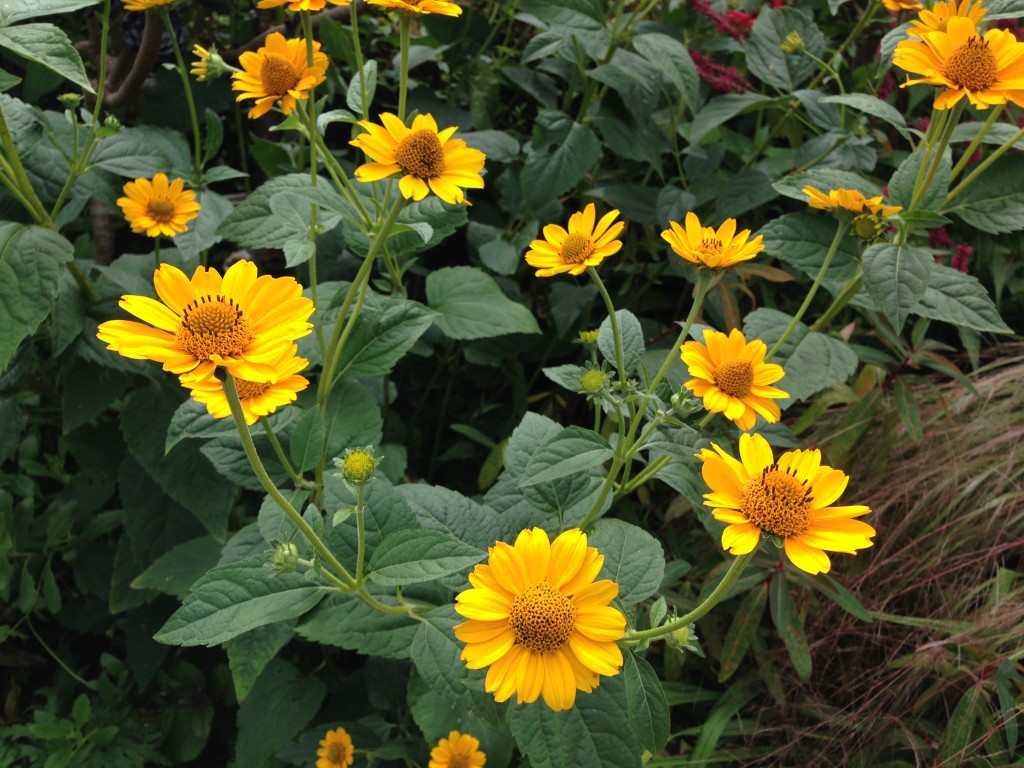 In the veg garden at Packwood, cosmos and calendula were planted en masse with rudbeckia (?) for beds with real wow-factor. 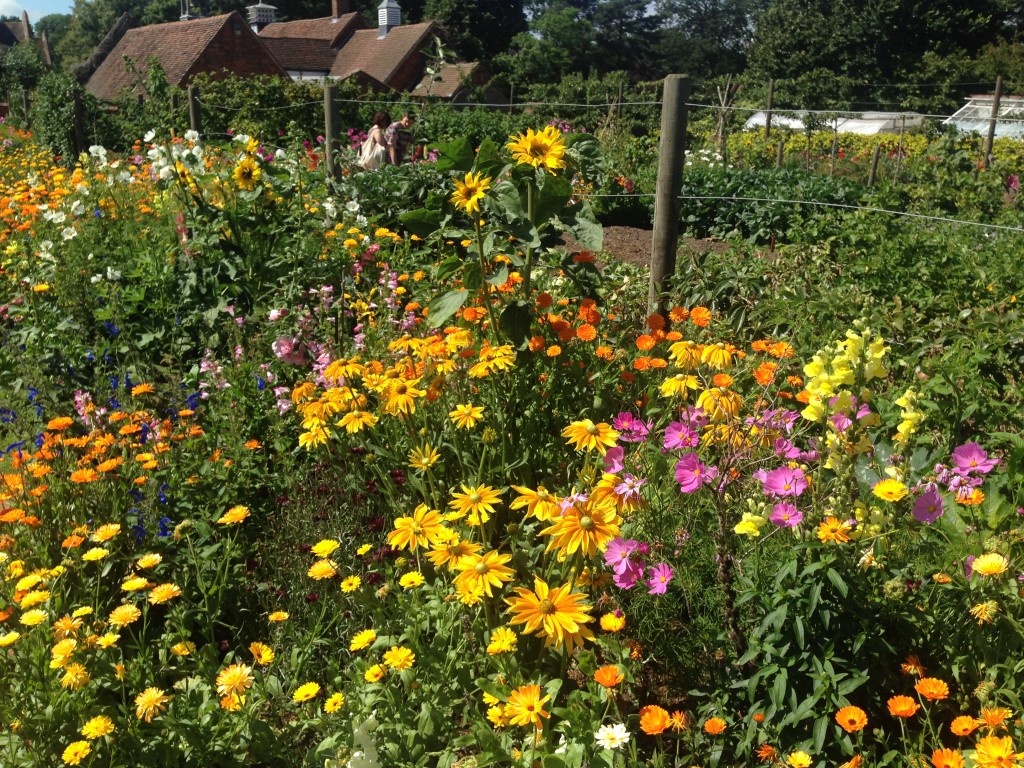 In the veg garden, cutting flowers are thrown in together for a riot of colour 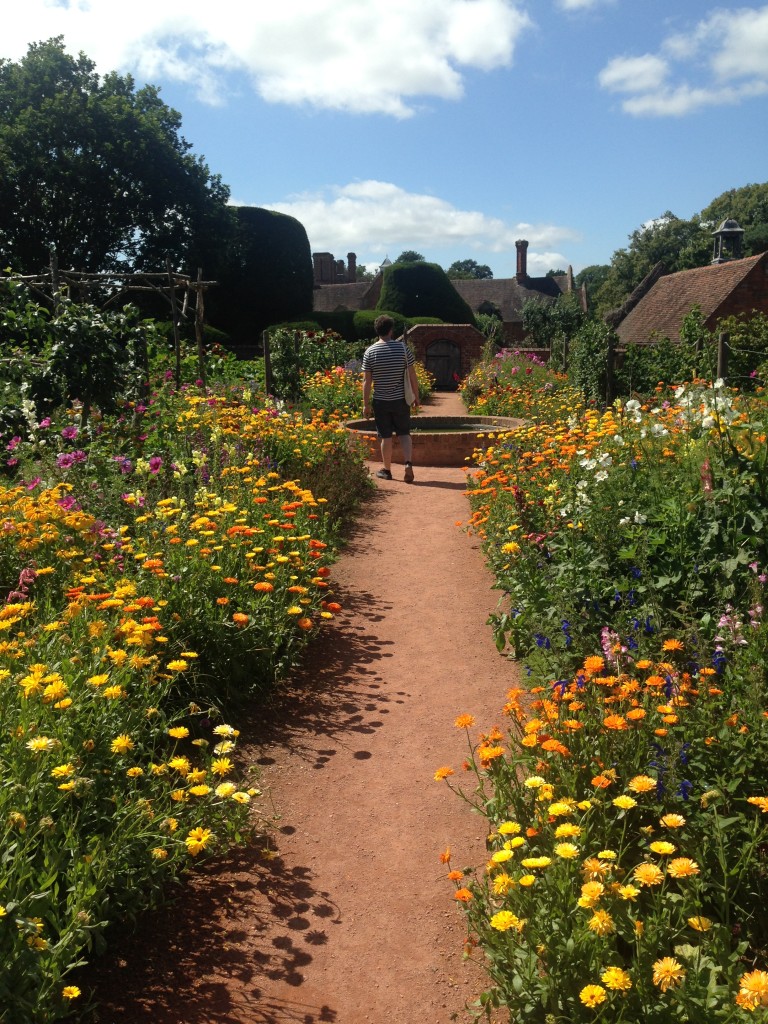 Matthew gets in the way of the camera, as usual

Baddesley Clinton is smaller than Packwood but the walled garden felt very, very special yesterday. One edge is given up completely to dahlias, with the surrounding borders filled with swathes of painterly-style bright colours plus tall stands of everlasting sweetpeas. Yes, the grass is traditional, but it’s neatness provided structure to balance out the beds. My photos don’t really do the planting justice; it was verging on garish – but I think it’s marvellous! 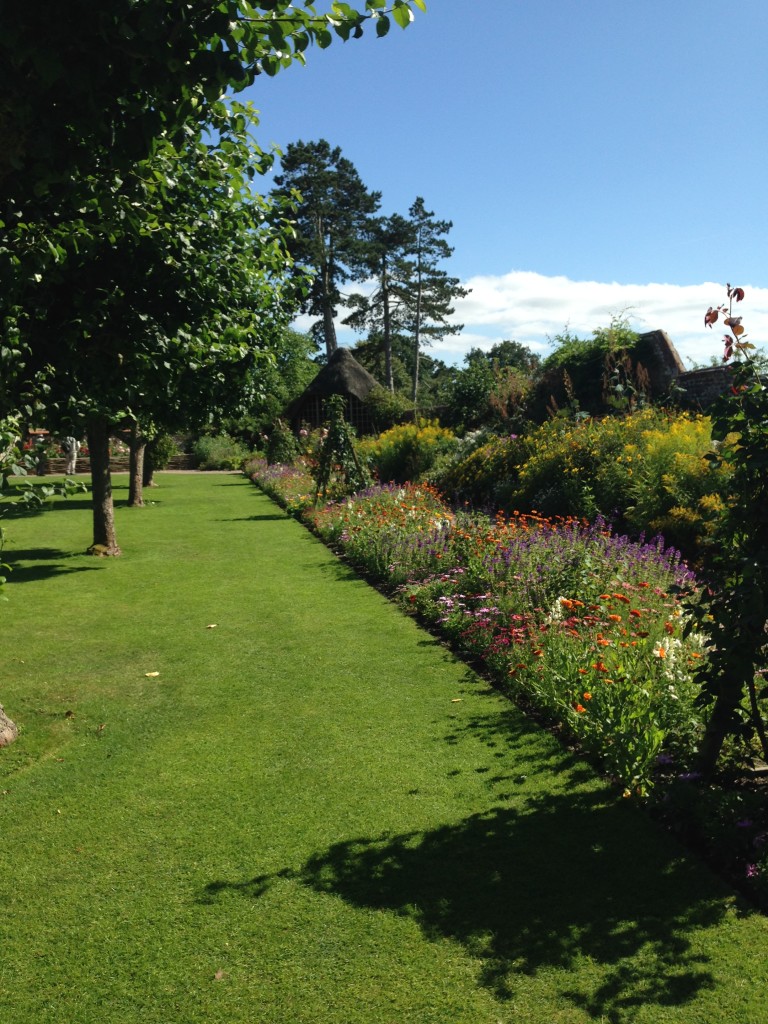 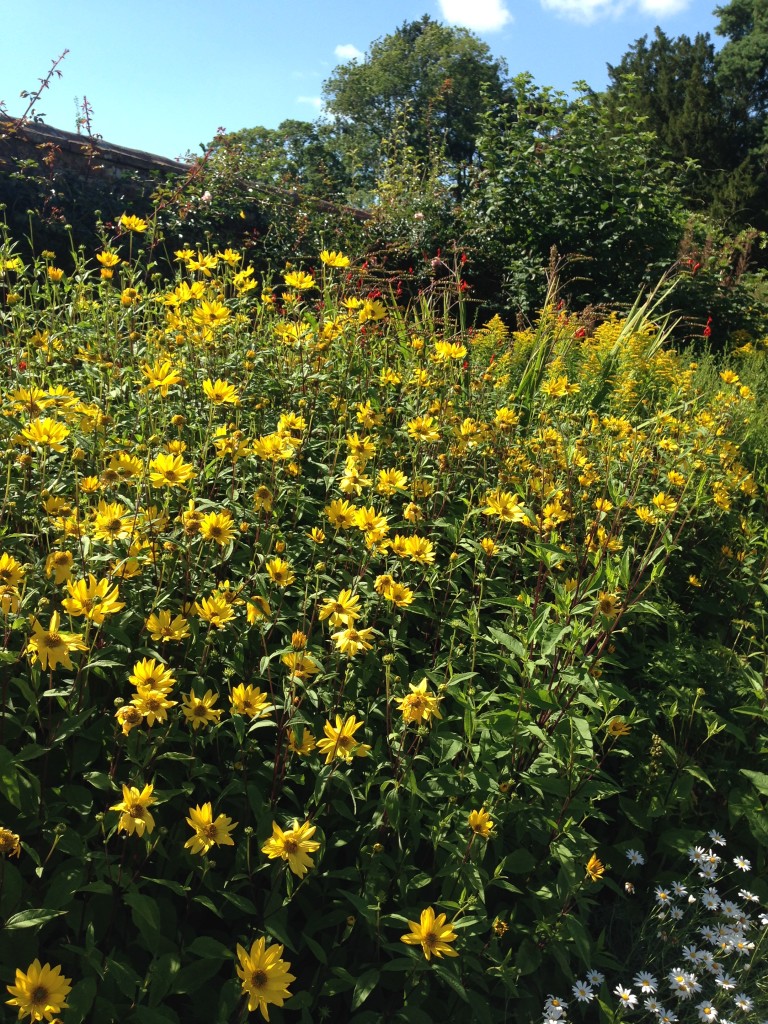 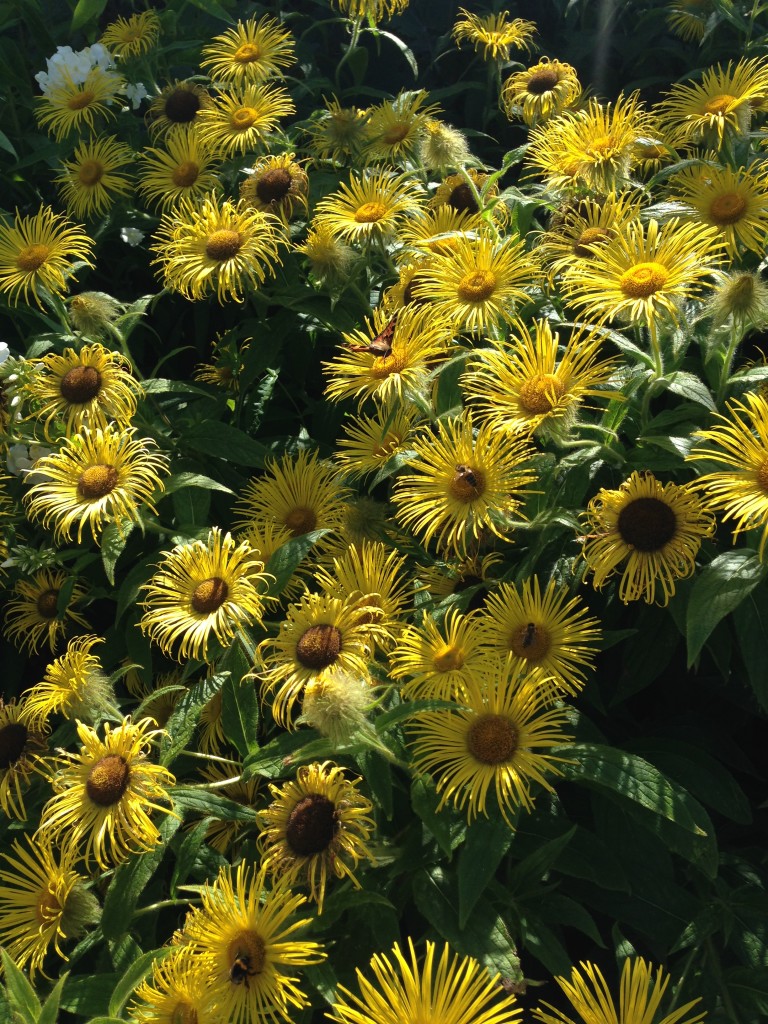 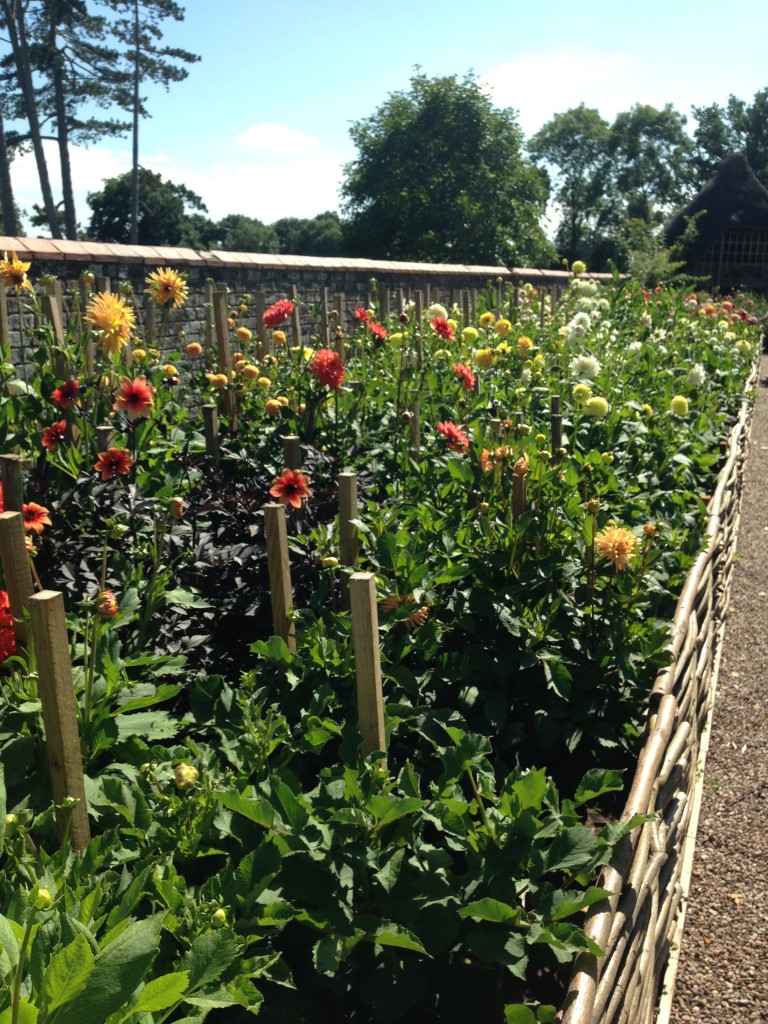 One corner at Baddesley is a herb-garden-turned-border. I actually looked at it for several seconds before I even realised that all these plants have a culinary use, so good was the effect. A tarragon had been allowed to grow into a sizeable shrub, the blue hyssop was humming with insects, and the parsley, sage, camomile and thyme gave good ground cover. 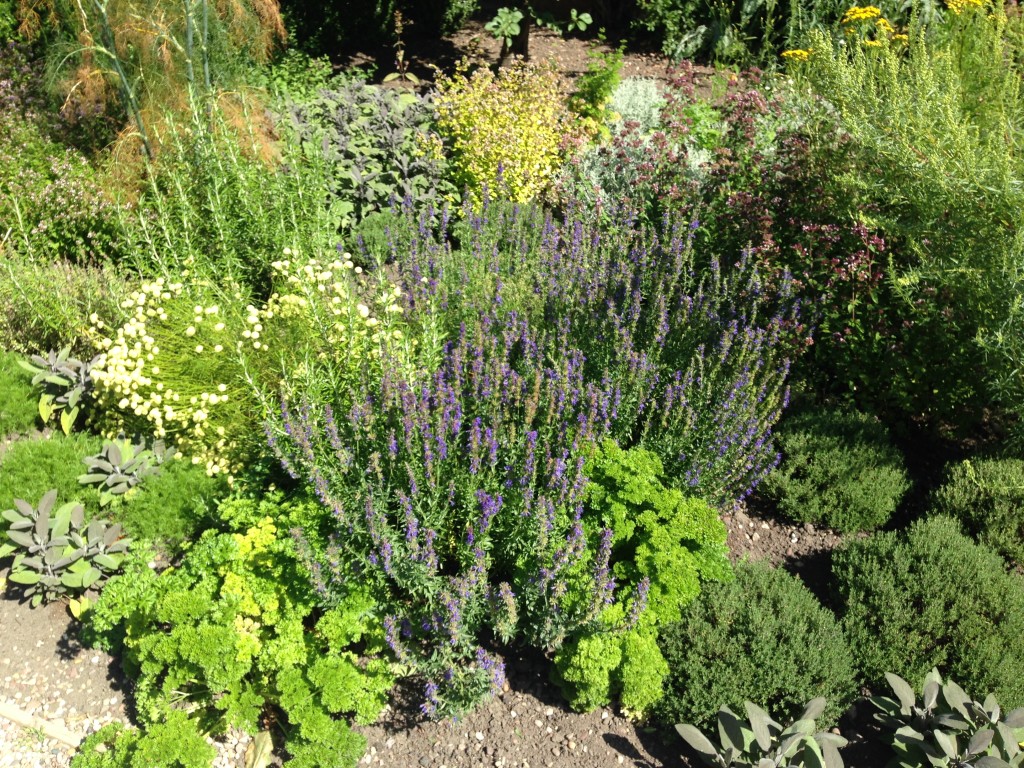 The herb garden is transformed into a border with hyssop, parsley, tarragon and sage

With a few weeks of summer still to run, I’m hoping to get to a few more places to help get the creative sparks buzzing!