I spent a good hour on Sunday processing soft fruit. I don’t mean putting it through the food processor… I mean topping and tailing gooseberries and blackcurrants to make them freezer ready. Yesterday at the allotment, my neighbour left with a crate (a crate!) filled to the brim with goosegogs. That’s a lot of crumble.

In truth our fruit harvest is down this year on last and I’m uncertain why. Perhaps the bushes need a good prune, or maybe I didn’t net properly and the birds had them. But still, on Sunday the bushes gave up about 1 kilo of blackcurrants, and there’s still more to come.

I’ve had my eye on Sarah Raven’s cassis recipe for quite a while. It’s very simple: in old money, for every pint of brandy, add 1lb each sugar and blackcurrants, plus a few blackcurrant leaves for flavour. Leave to stew for a few weeks before straining. Cassis is great for making cheap white wine (in particular, fizz) into something drinkable: the French call this a Kir, or if you’re using fizz, a Kir Royale. I’ll give the verdict in the autumn. 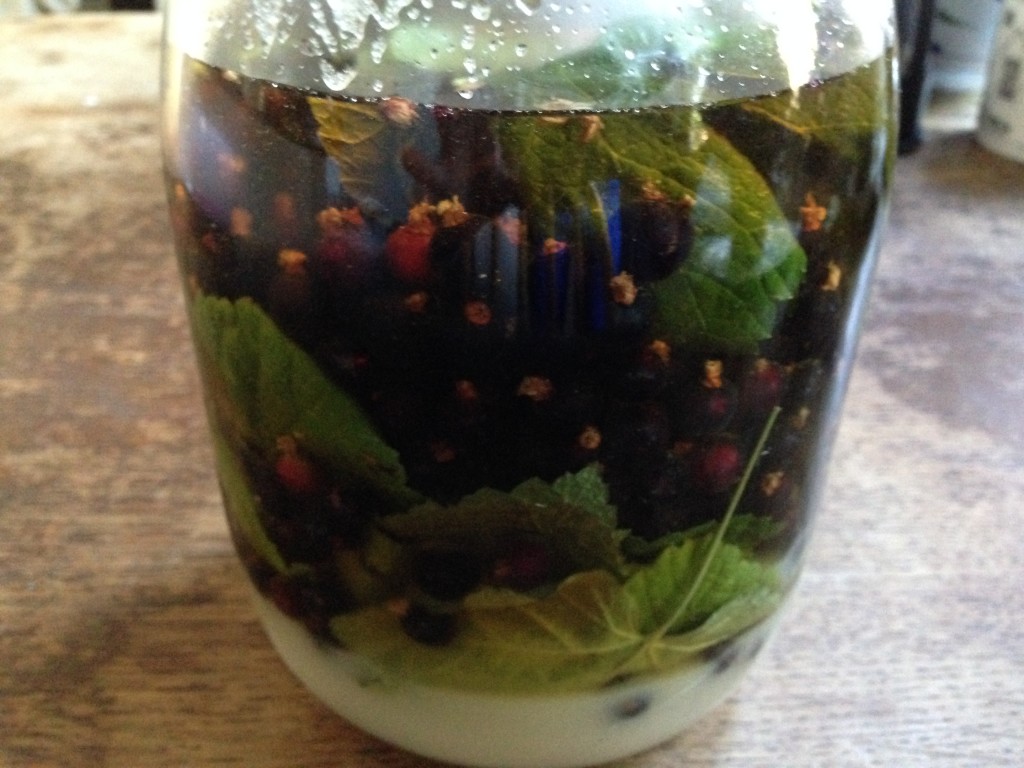 Cassis in the making

But the best, the absolute BEST, thing to do with blackcurrants is to turn them into ice-cream. And I mean ice-cream is the purest sense; that is, cream that is flavoured and frozen. Most ice-creams have a custard base which can be a bit of a faff. This one is as simple as can be.

Firstly, get yourself some cream. Incidentally, I’ve never weighed or measured anything when making this ice-cream, just going with what I have. Each time it’s worked out yummy. But that’s no help to you so I’d allow about 450ml double cream. Then you’ll need some blackcurrants. I took about 500g of fruit and cooked it down with a little sugar and water until the fruit burst. It tasted sweet but not too sweet. It was then pushed through a sieve and chilled to make a thick glossy smooth puree. …and some cooked and sieved blackcurrants…

Then you just mix it all together! Whip the cream until it’s just thickened and then fold in the blackcurrants. Don’t over-whip as that will mess up the texture; it needs to be smooth and dollop-y. Give it a taste: it should be slightly too strong and sweet, as the freezer will dull the flavour. If in doubt, add a little icing sugar to the mix. 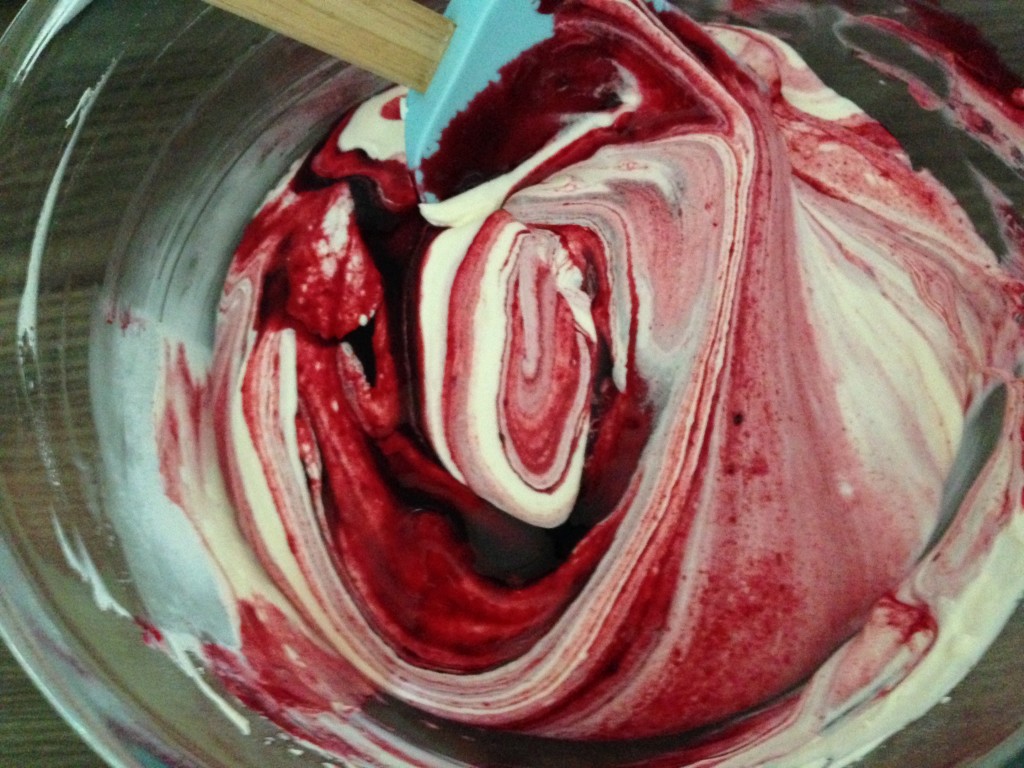 Then pop the lot into your ice-cream maker and churn until frozen. Or frozen-ish. I always make too much and so it stays very soft-set. No matter, as it hardens up just fine in the freezer. 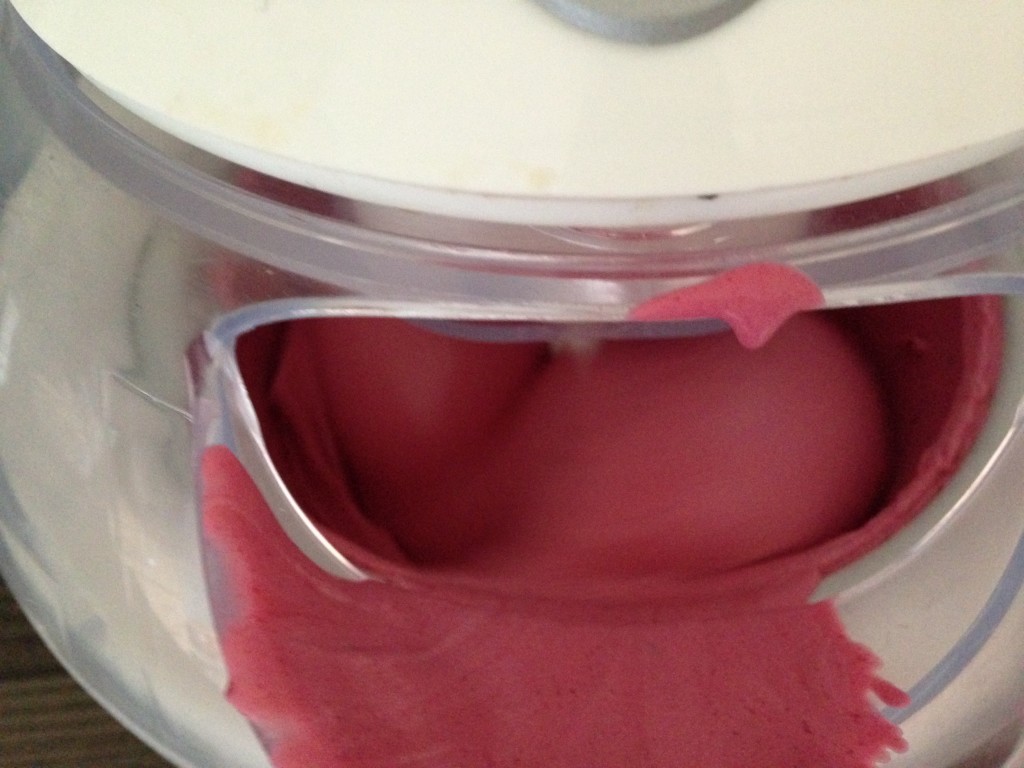 Pop the lot into a tub and freeze until firm. This ice-cream retains a lovely  texture that really is akin to a custard-base ice. I can only imagine that the blackcurrants, with all their pectin, have something to do with this. If it’s too hard to scoop, just leave the ice-cream out of the freezer for 20 minutes or so before serving. If you, like me, pick far too many blackcurrants at this time of year to eat, then you can always make up the fruit puree and freeze for future ice-cream making forays. I’ve made this with both sieved and chunky puree, and I think sieved gives a better texture.

Be warned: this is fruit and cream and sugar. It’s rich and a little goes a long way. But my God, it’s good!

Recipe half-remembered from a National Trust cookbook from many moons ago. You’ll need an ice-cream maker.

First make your puree. Remove any big stems or leaves from the currants. Put them in a pan and cook on a gentle heat with a splash of water and a few spoons of granulated sugar until the fruit bursts. Taste it: it should be sweet but retain a bit of sharpness. Push through a sieve and chill.

Whip the cream until very soft peaks form. Fold the fruit into the cream, tasting as you go until the right balance is achieved. Add icing sugar if you need to. It should taste a bit too strong and a bit too sweet. Churn until frozen, then put in the freezer to harden up.