It’s stocking-up-the-freezer time again. There are a few staples I keep in stock for evenings when I can’t be arsed to cook: bolognese, beef rendang, a few curries, and of course chilli con carne.

I have opinions about chilli. They are not quite as strong as my opinions about bolognese (see http://notesfromthevegpatch.com/thoughts-on-bolognese/), but are robust nonetheless. It’s not about keeping it authentic – chilli isn’t authentic anyway, but a Tex-Mex invention. It’s about making something really really good to eat.

My base recipe is from the River Cottage Meat Book, but I’ve changed it so much over the years that now it’s really a new dish. Most controversially, I don’t use mince. Don’t like the texture. Instead I use braising steak that has a good amount of fat in it, for flavour, and if the meat I’ve got is too lean then I’ll sub in some shin or pork shoulder to up the fat content. I use chorizo for that smoky flavour, and ancho or chipotle chillies, again for the smokiness. I like to finish it with dark chocolate. This time around I’m using our home-grown passata and borlotti beans, from the freezer (I know, check me!).

It’s been a few years of experimentation (and a few scribbled notes) but I think my chilli is now pretty damned good. 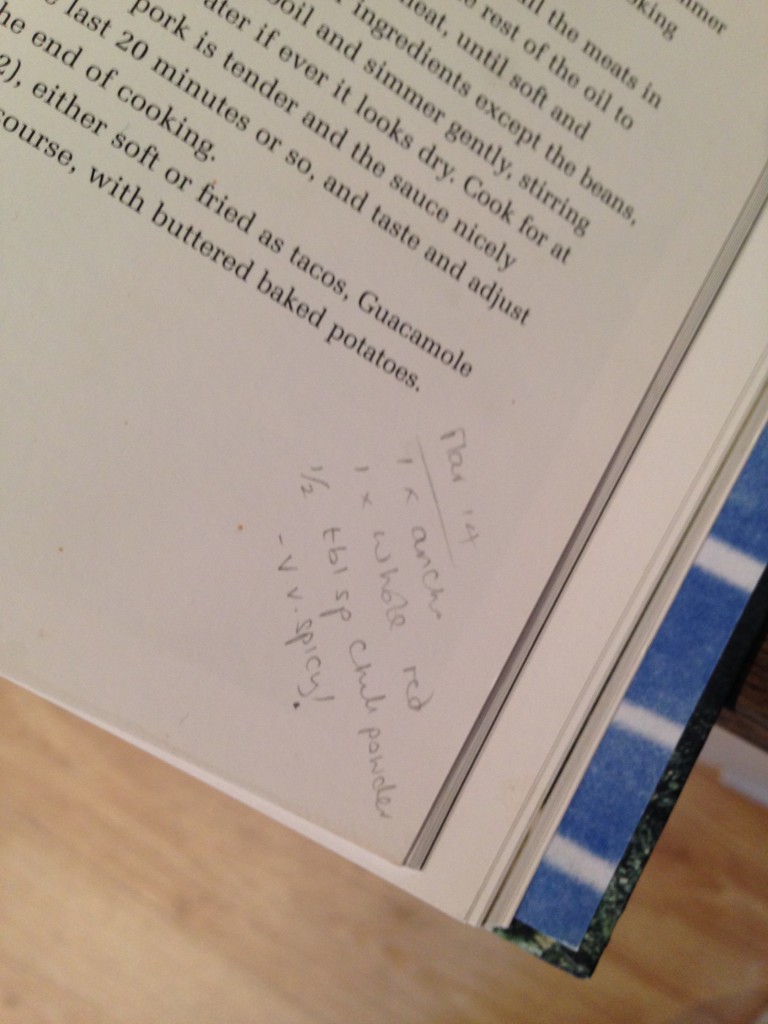 First thing is to prepare the meat. This is a mixture of lean casserole steak, beef shin and pork shoulder, all of which I diced into 2cm pieces. It came from the supermarket, hence the leanness. Usually I’d just use braising steak with a bit more fat attached to it. Make sure it’s dry, else it won’t brown properly. 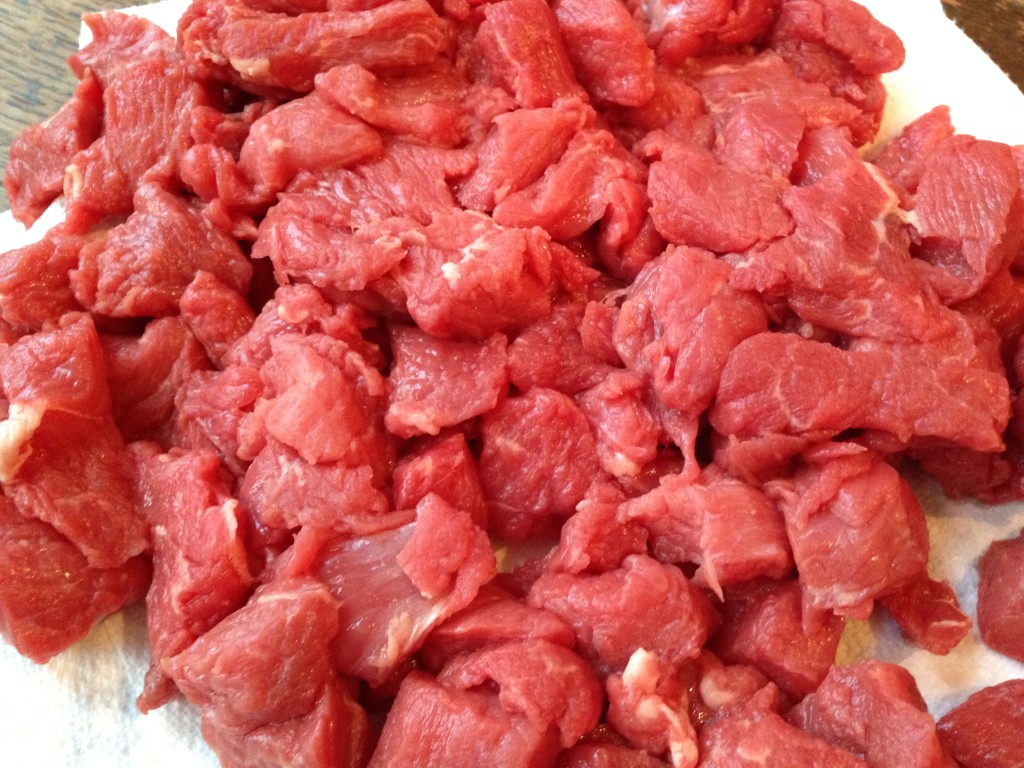 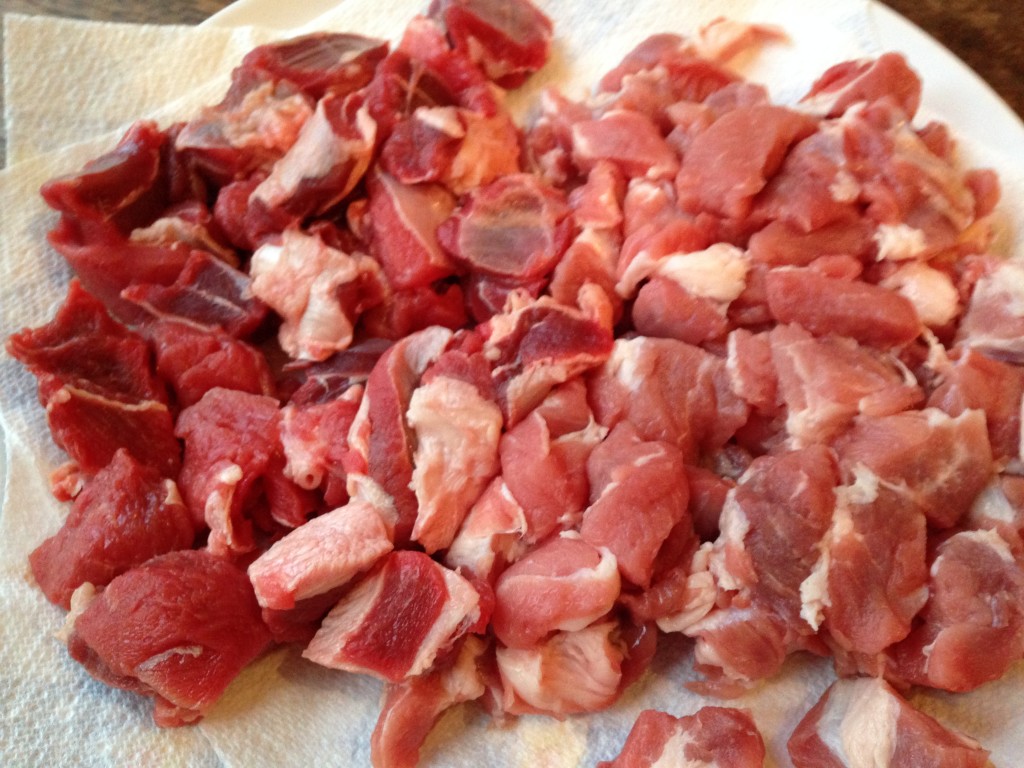 400g each pork shoulder and beef shin. Note the fat! Fat is FLAVOUR.

Then get everything else ready: chorizo, onions, beans, passata (or you could use tinned tomatoes), cinnamon stick, bay leaf and ancho chilli. Not shown: vinegar, brown sugar, beef stock cube (low-salt), dried oregano and chilli powder. 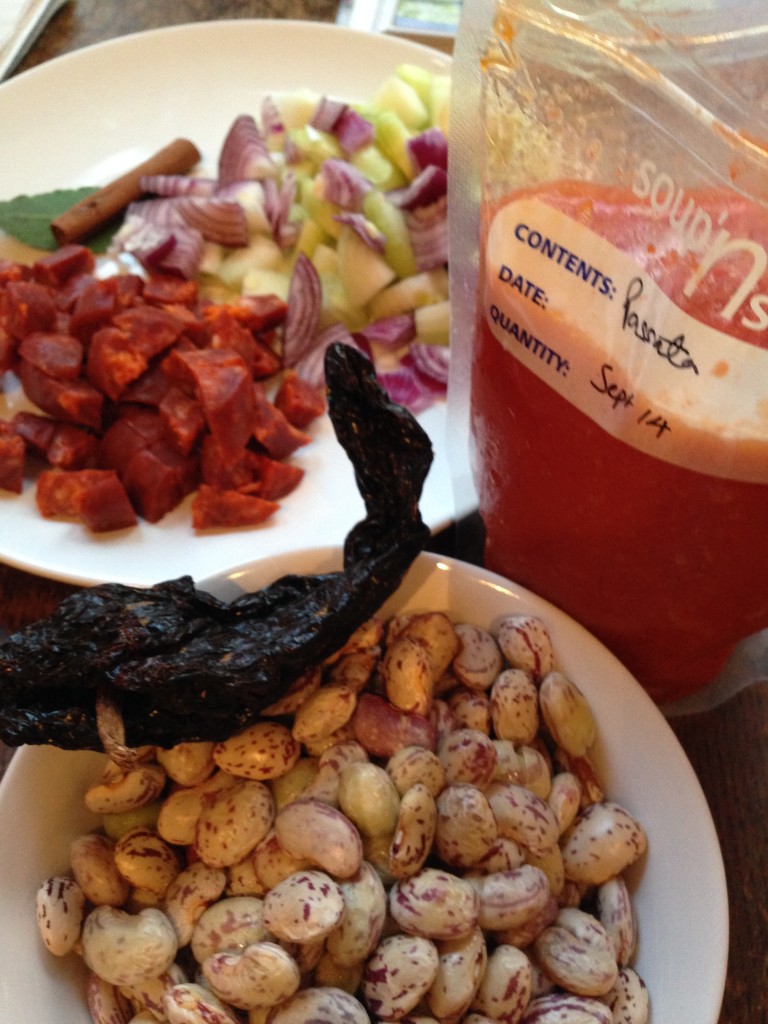 Anchos are pretty enormous and ugly looking, but they give a deliciously fruity, hot and smoky flavour. You can get them at most supermarkets now. I’ve used chipotles in the past too, also good, but can blow your head off if you are not careful. You can reconstitute the dried chillies first but I tend to drop them in whole and let them dissolve into the dish (remember to fish out the stalk at the end). 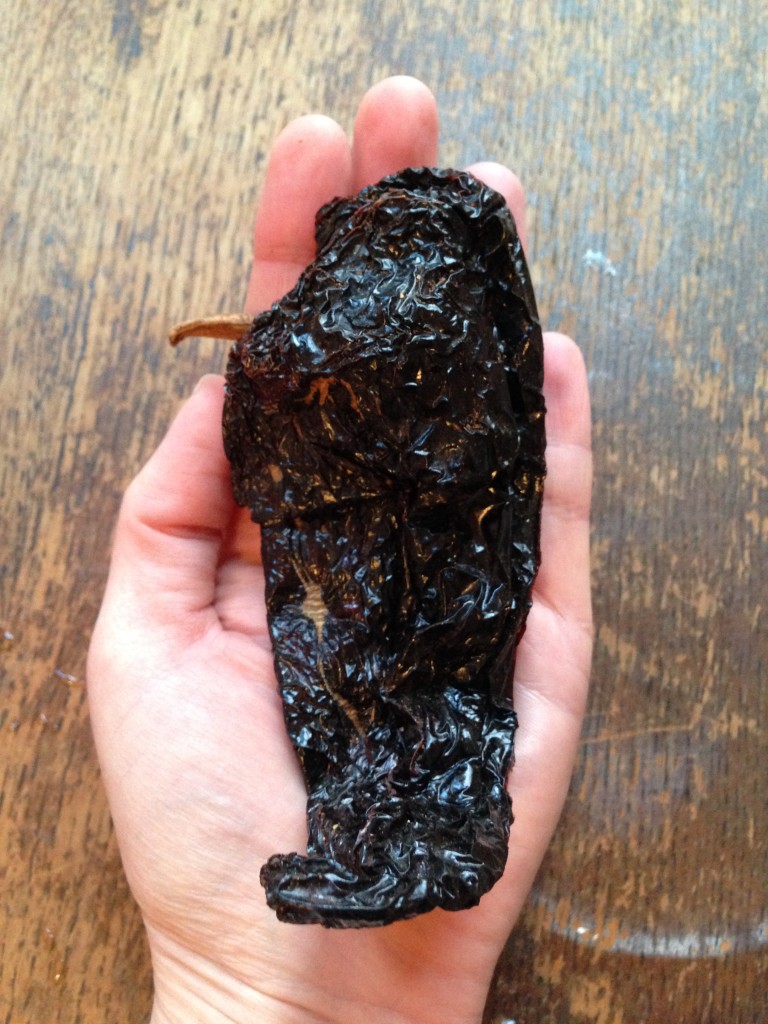 The ancho chilli up close

Next brown the meat, properly, so that there are lots of crunchy blackened bits. It’s all flavour. This has to happen in batches and takes ages. I use a heavy frying pan, then move the browned chunks over to the waiting casserole. 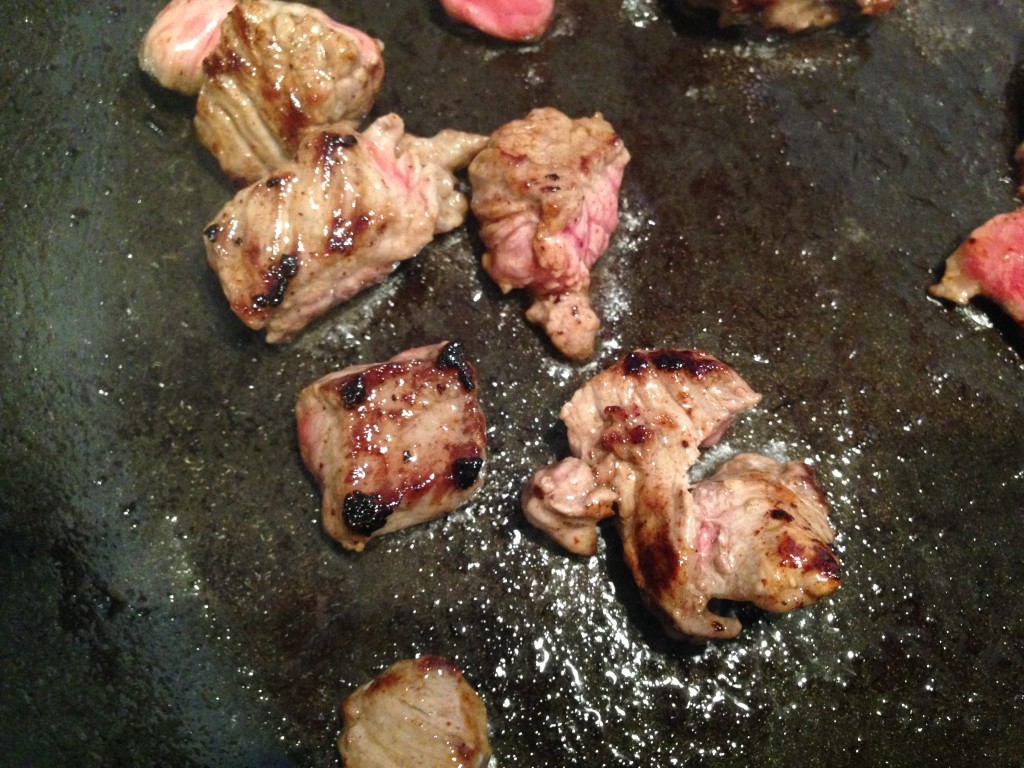 The rest of it is all very easy. Fry the chorizo so the lovely red fat runs out, then soften the onions. Add in a little brown sugar and vinegar, then melt in a beef stock cube (unless you’ve got some beef stock lying around, in which case use that instead).

Add in the chilli powder: I now use two teaspoons of Kashmiri chilli, but it’s to taste really. If you’ve got a mild chilli, use more…if it’s hot, use less. This amount make a huge vat of chilli that’s on the hotter-side of mild. Then add the cinnamon stick, bay leaf, ancho and slosh in the pasatta, bring the lot to the boil, and add to the waiting beef. Add in enough water to cover.

Pop the lid on and leave to putter away for a few hours. This vat took three hours, due to the beef shin, but if using braising steak it might only need two hours. It can be done on the hob but I usually put it in a cool oven (160c) to get a nice all-round heat. 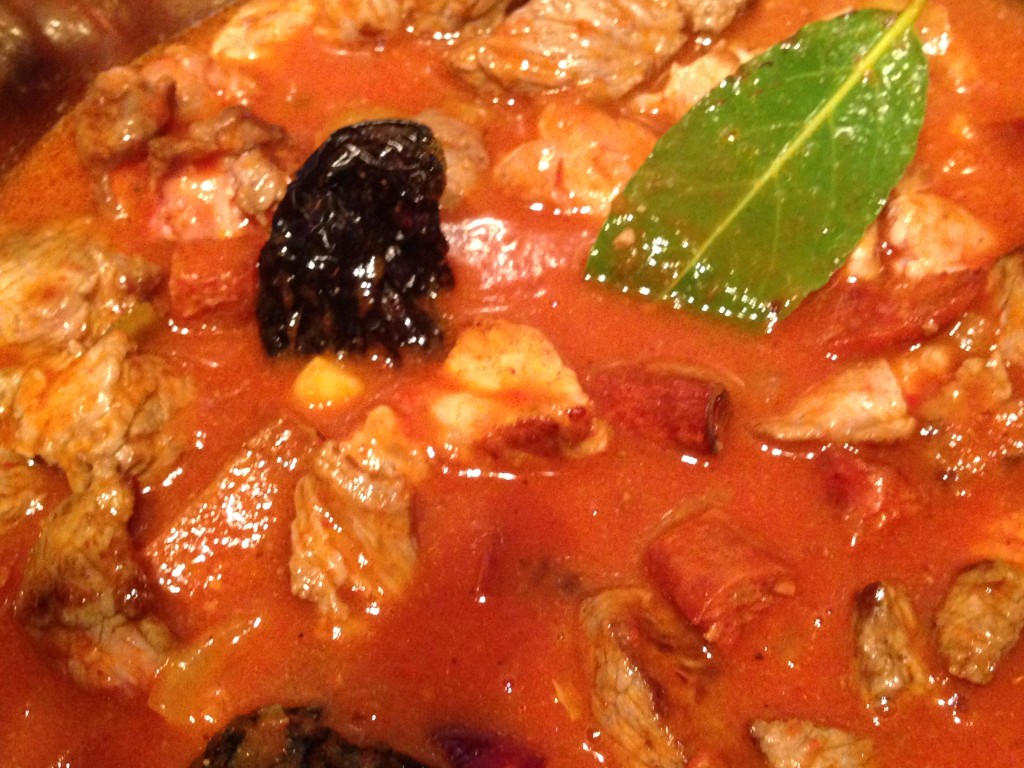 Chilli, prior to its three hour cook

About half an hour before it’s ready, add your beans. I used borlotti beans from my allotment which I boiled for about 10 minutes, but tinned beans are fine.

Then it’s chocolate time. Add this right at the end – I’m using 100% cacao. It doesn’t taste of chocolate as such, just adds an illusive bitter richness. 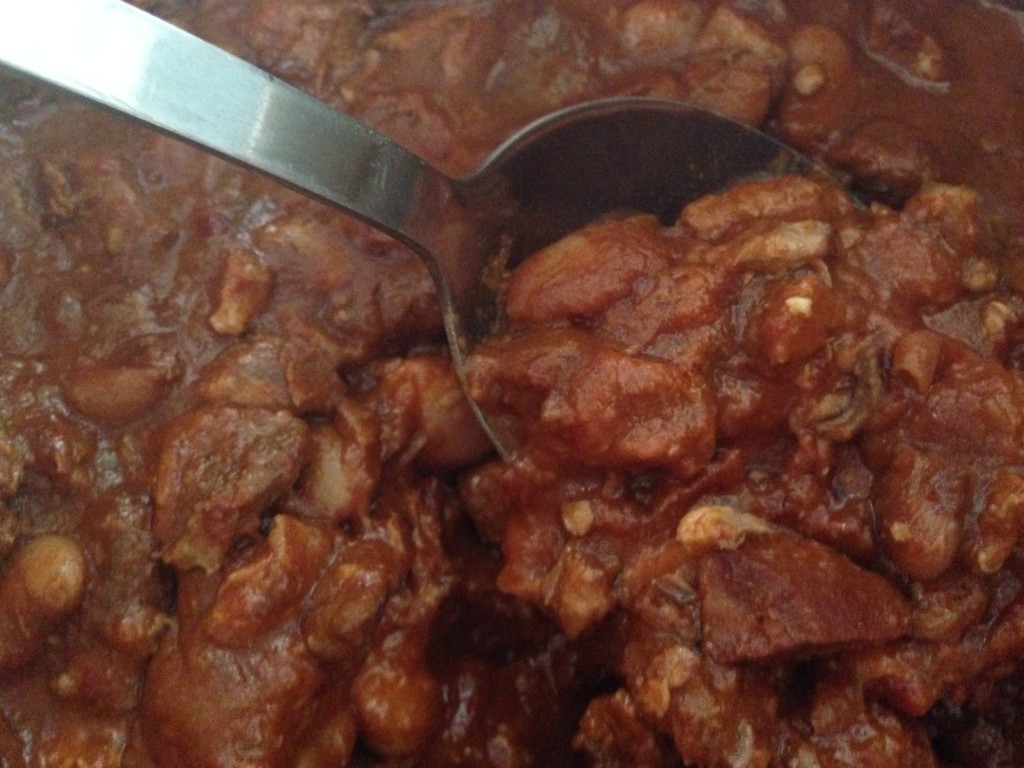 This makes A LOT of chilli. Enough for about 12-14 portions I think. It’s really really good. Serve it up with rice, sour cream, grated cheese and all the usual extras.

About 1.5kg braising steak, or a mixture of steak, shin and shoulder pork, diced into 2cm pieces and dried on kitchen paper

Few handful fresh borlotti beans, or use a tin

Brown the meat in olive oil in batches. Use a heavy frying pan and transfer the meat when done to a large casserole. In the same pan, fry the chorizo until the fat runs, then soften the onions until translucent, about 5 minutes. Add chilli powder, vinegar, sugar, beef stock cube and a little salt (not too much at this stage) and cook for a minute or two. Add the bay, oregano, ancho and cinnamon stick, slosh in the tomatoes, bring to the boil. Transfer the lot to the casserole, top with water so meat is covered. Cover and cook for at least two hours, until meat is tender and sauce is rich and thick (it may need three hours). This can happen on the hob or in a slow oven, 160c. About thirty minutes from the end, add the beans – if using fresh, boil them for ten minutes before adding to the chilli. When nearly ready to serve, finish with a grating of cacao and check the seasoning, adding more salt or chilli as required. Fish out the ancho stalk, bay leaf and cinnamon. Bubble for another ten minutes or so, then serve up. To freeze, cool completely (overnight) then transfer to containers.