It’s a truth universally acknowledged that once the work is (pretty much) over,  illness strikes. After Birmingham Weekender there were a few other work projects to get out the way, a couple of family parties and my mock yoga teacher exam. The second, literally the SECOND, the yoga was done, then the lurgy arrived. Incidentally, anyone who goes to a yoga class and thinks it looks easy to lead a class then trust me, it really isn’t. Big respect to all the yoga teachers out there.

So I’ve been holed up in the flat, generally being ill and getting bits of editing and writing and pitching done, and all the time have been thinking that I need to be outside getting the allotment ready for winter.

The tomatoes are finished now, so the greenhouse needs emptying and scrubbing. The sunflowers have faded, the heads hanging down onto the soil. I have chard and mustard spinach seedlings to plant out, and the leeks really need attention before they all succumb to rust. On Saturday our neighbour gifted us some gorgeous stems of kale, adding to a colourful harvest. 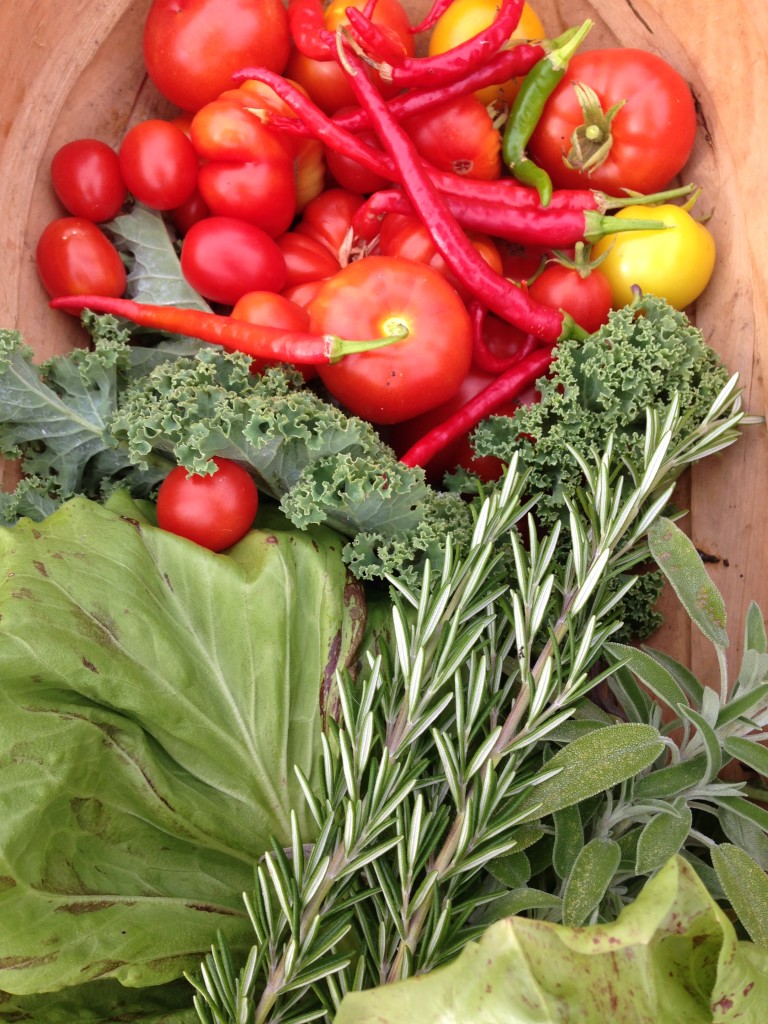 Saturday’s harvest (the kale isn’t mine, wish it was) 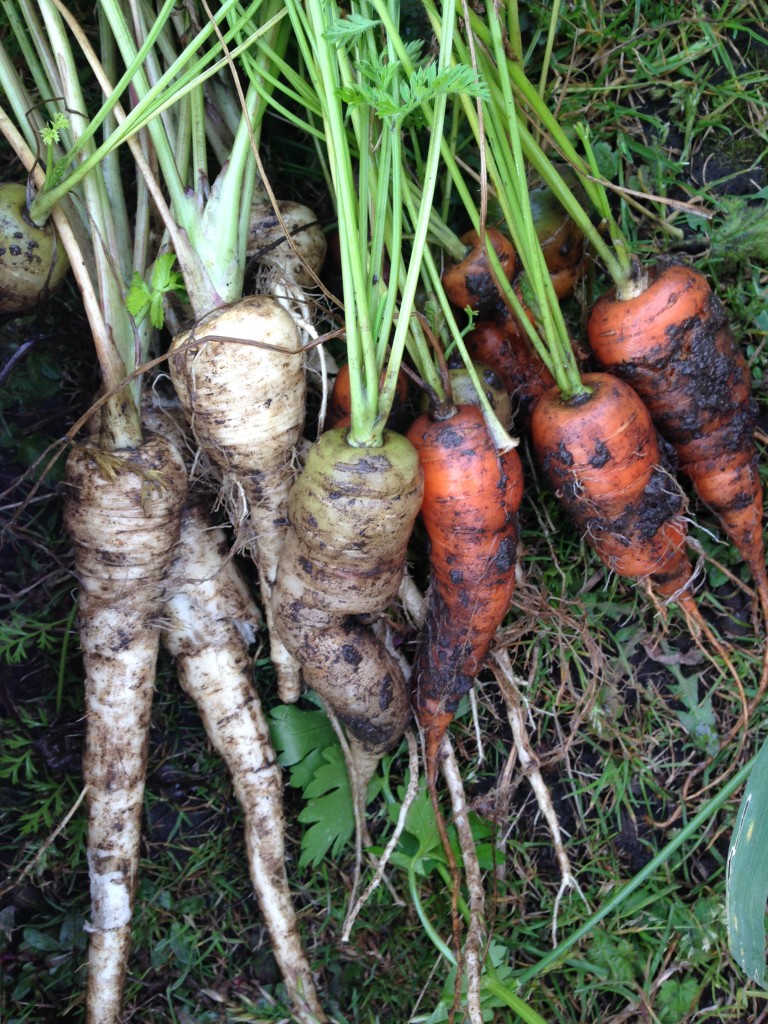 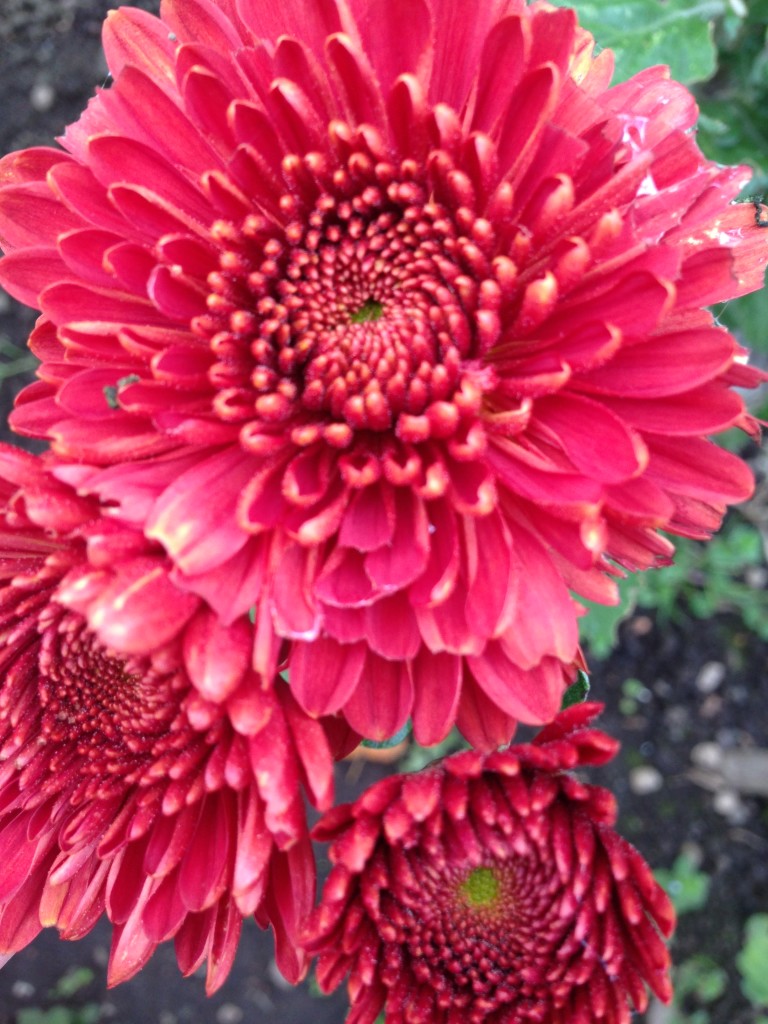 Flash of red from the crysanthemums

Busy-ness leads to food going uneaten, with not enough mouths at home who need feeding. This morning I found stale bread AND pain au chocolate in the bread bin. Back when I worked at Cooks Bakery in the late 1990s, the baker would use up the week’s leftover loaves by mixing a tray of old-fashioned bread pudding, filling the bakery with a glorious fuggy spiced aroma. It was a bit like Christmas. But why limit bread pudding to bread? I had a hunch that pain au chocolate would take a classic to new heights. Even better, it’s dead easy to make. 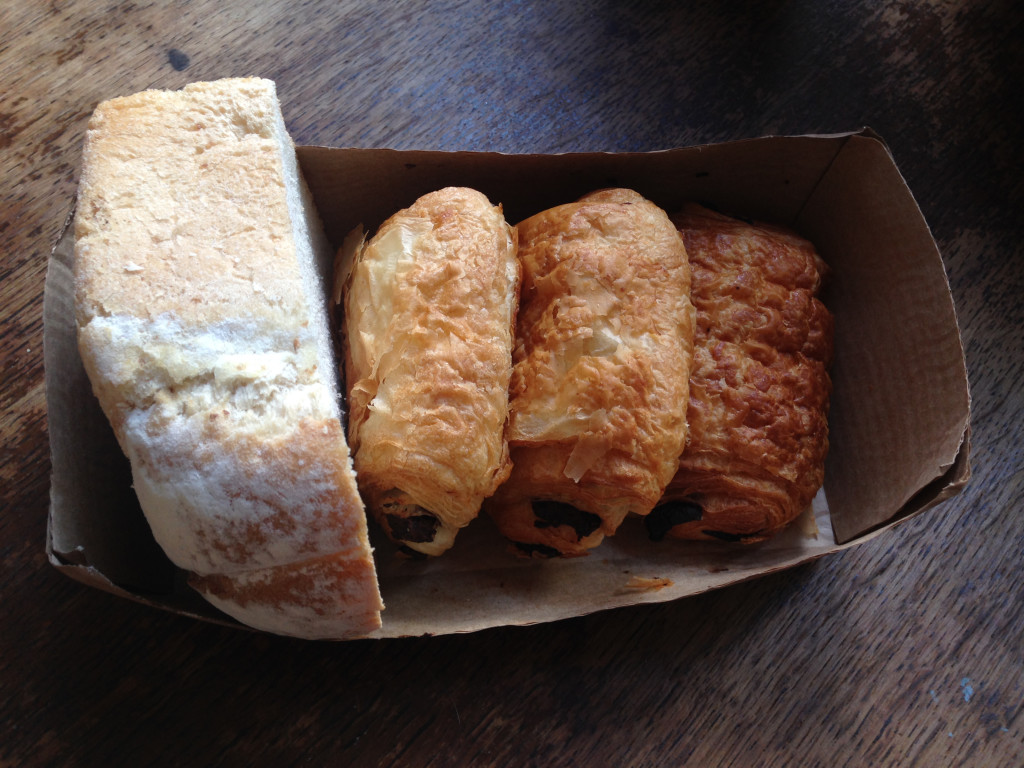 All you do is take the crusts off the bread and pain au chocolate, chop them into chunks and put them in a bowl. 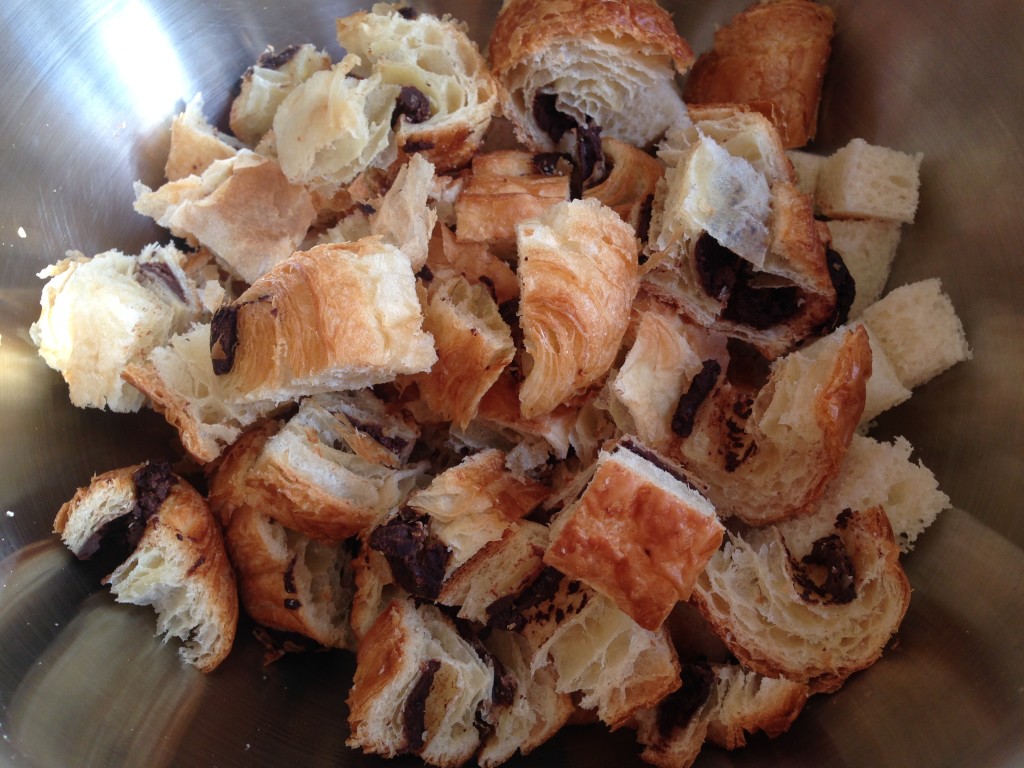 Chop up the bread and pain au chocolate into chunks

Whisk together eggs and milk with vanilla extract, then add to the bread along with melted butter and mixed spice. 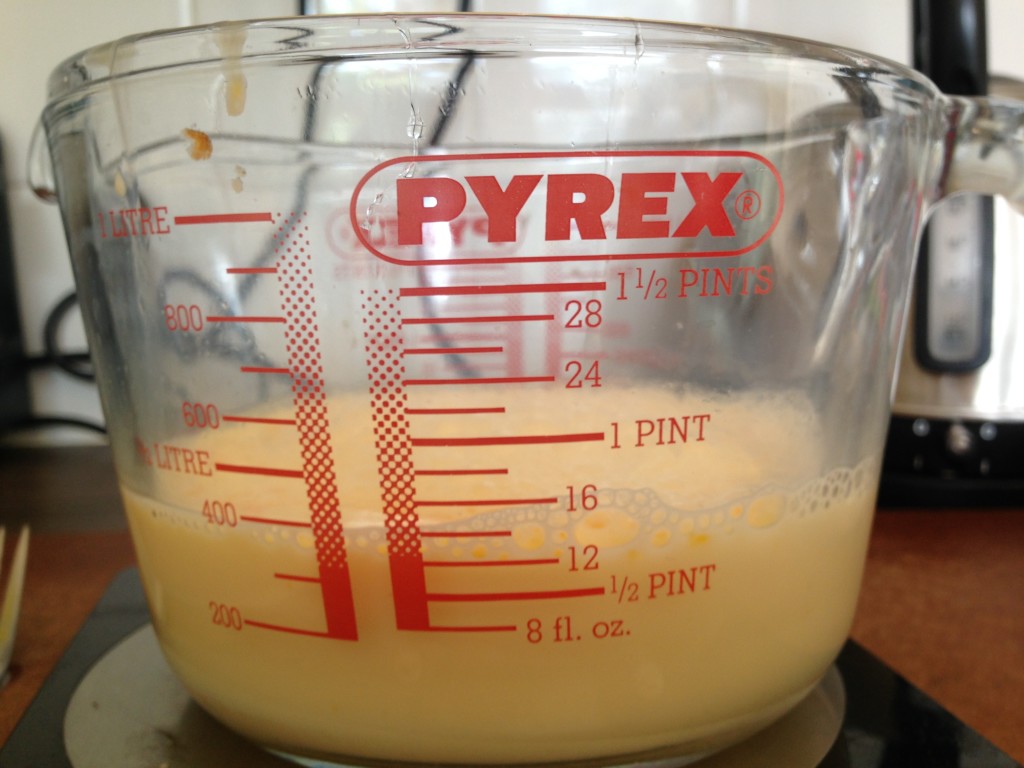 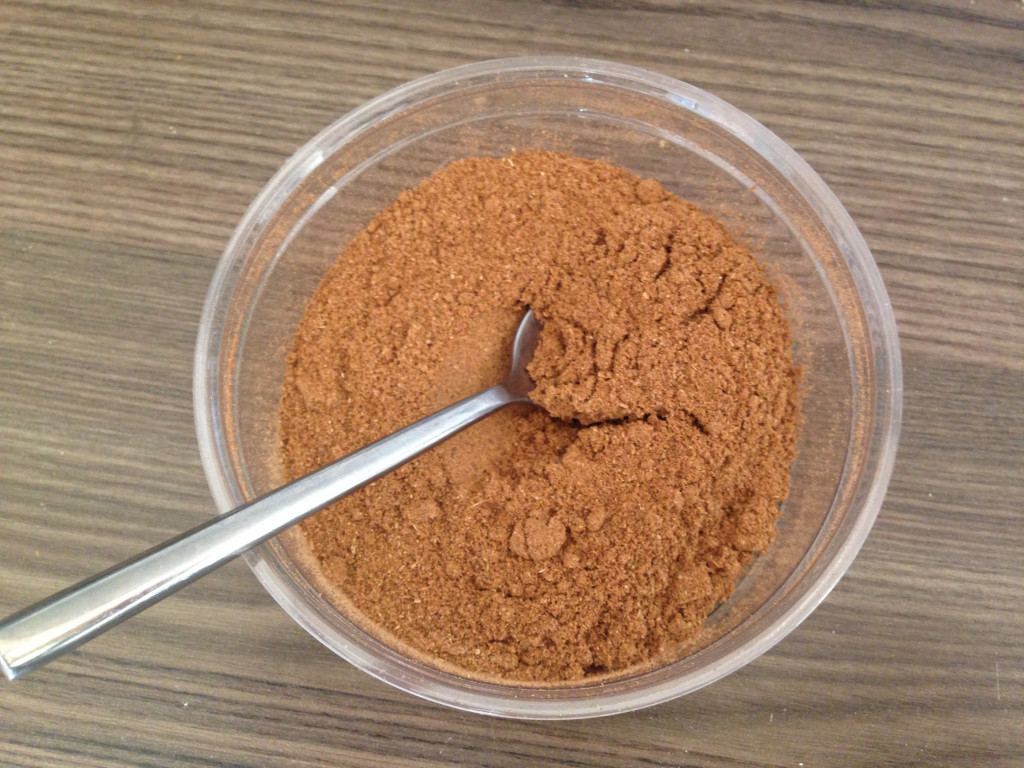 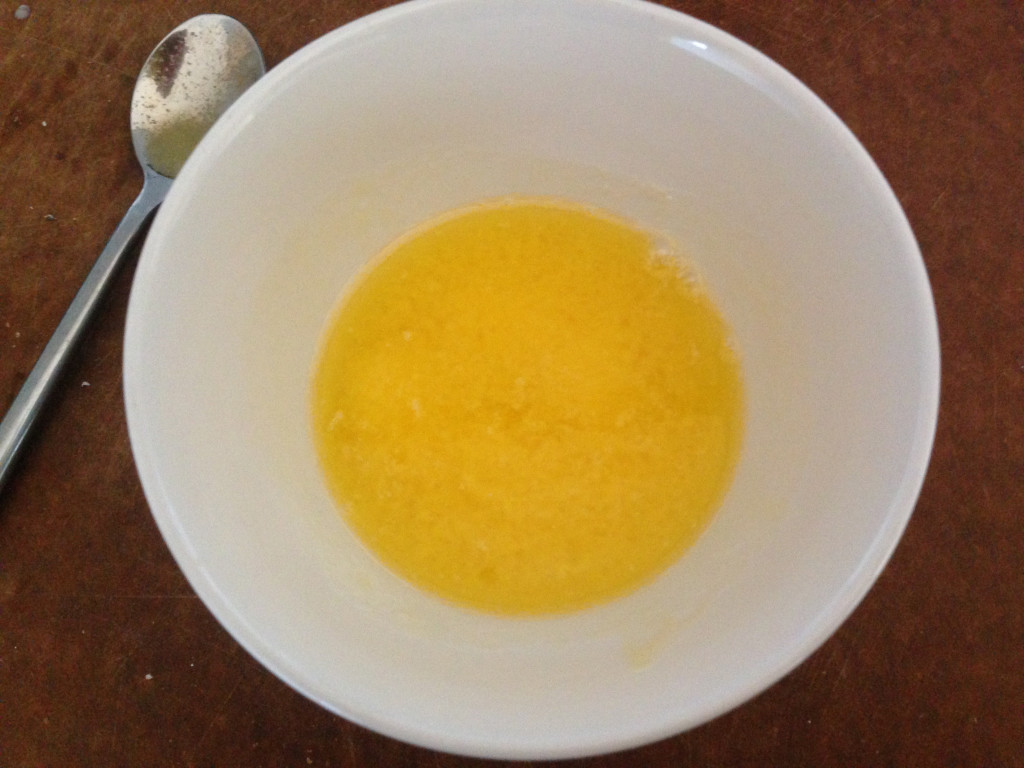 Then just stir it all together with a handful of dried fruit and brown sugar. That’s it! Leave for ten minutes or so to allow the liquid to soak into the bread, then pour into a tin, sprinkle with demerara sugar and bake. Mix it all together along with dried fruit and brown sugar. Leave to soak for ten minutes or so.

The raw mixture does not look promising, I grant you. But go with it and you’ll be rewarded with a comforting, chocolatey, warmly spiced slice. 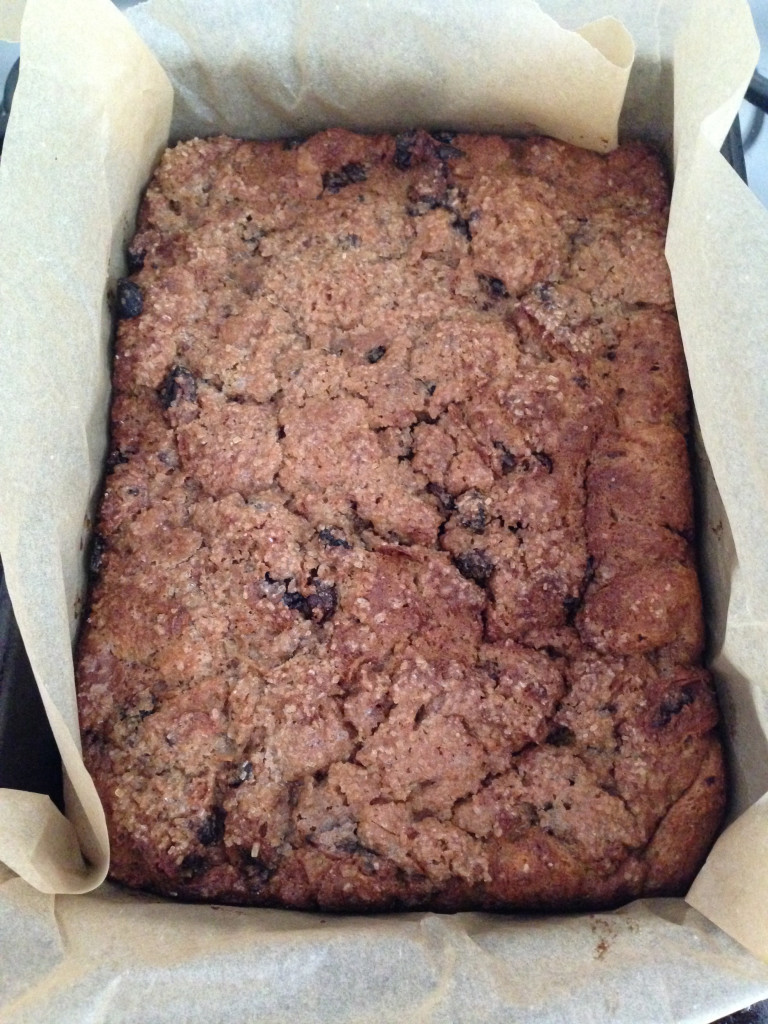 After an hour in the oven: chocolate bread pudding

This is kind of like a handheld version of bread-and-butter pudding. Leave to cool in the tin before slicing, then serve warm for pudding or as a snack.

Chop the bread into chunks and put in a large bowl. Whisk the egg and vanilla into the milk and add to the bread. Add in the spice, dried fruit and light brown sugar. Melt the butter and add to the bowl. Mix everything together and leave for ten minutes to soak.

Preheat the oven to 160c (fan) and line your tin with baking parchment. I used a brownie pan, but a square cake tin also works. Pour the mixture into the tin, smooth and top and sprinkle with demerara sugar. Bake for 1 hour or so until set, puffy and golden. Cool and serve.