Just like that, summer has passed. I’ve been heads down with festival event management since July and now that the work is done, I look up and see golden leaves and fading light. In a bid to escape the tyranny of WhatsApp we escaped to a regular haunt of Mawgan Porth (no phone reception) for a few days. Back in June we saw two owls during our visit, one of which was still there, presumably on its own as I could hear midnight twits but no twoh-s. 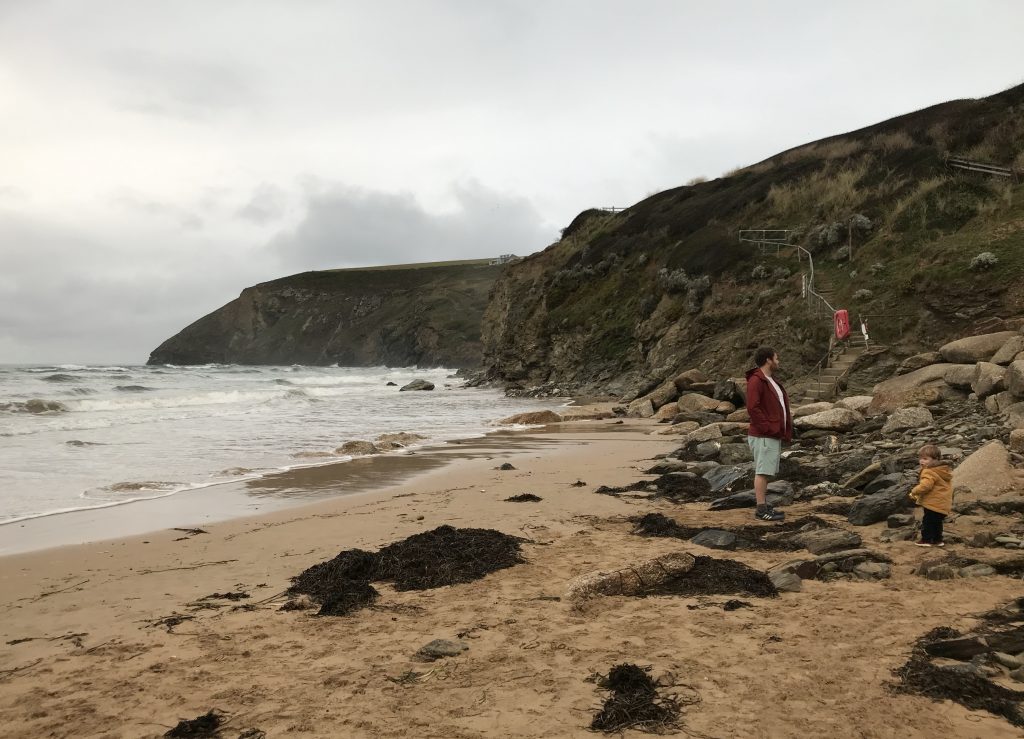 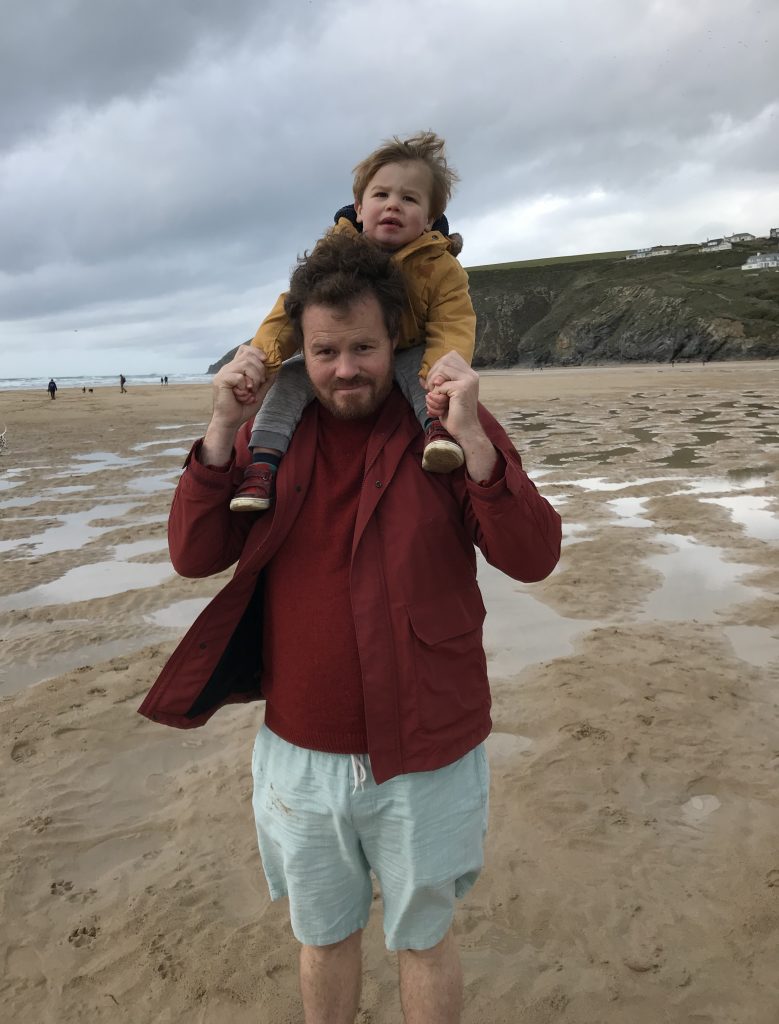 It’s good to reconnect with family life and go back to something approaching simplicity; phones are so rude for the way they demand attention, 24-7. Back in Birmingham I attempted to keep my rural idyll going with a visit to the Sandwell Park Farm, a delight of a Victorian small-holding and kitchen-garden once owned by a very rich farmer, and now open to the masses for just a few quid entry. Dear God, won’t you send me a walled garden complete with box hedging 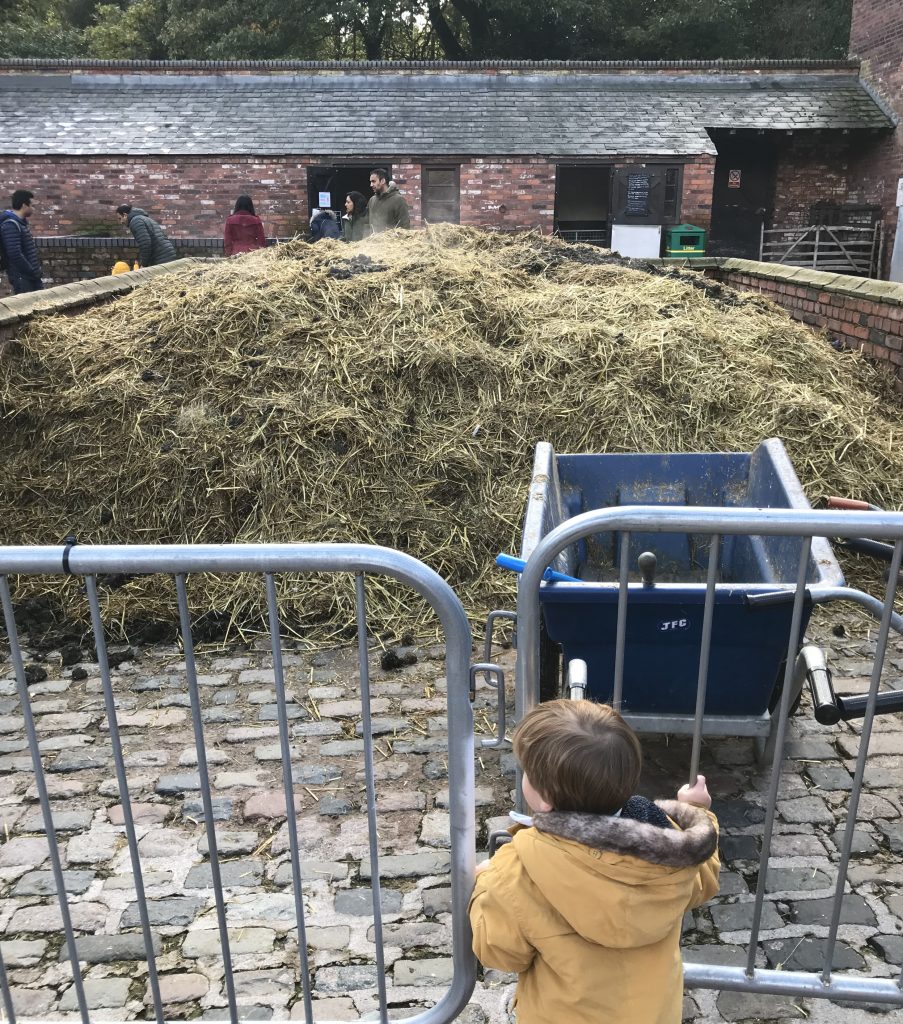 Harry knows that my mind is turning to manuring the allotment and garden. A big pile of steaming poo is always a draw.

Actually, the kitchen garden reminded me of my parents house, for the soundtrack of a visit here is thundering vehicles on the M5. One side of the wall is calm, the other is tumult. The gardeners have been busy picking pumpkins ready for halloween – and I can report that the mystery squash I pictured on the allotment a few weeks ago has indeed turned orange, and is now forming an autumnal display in my sitting room prior to being carved and illuminated with a tea light. 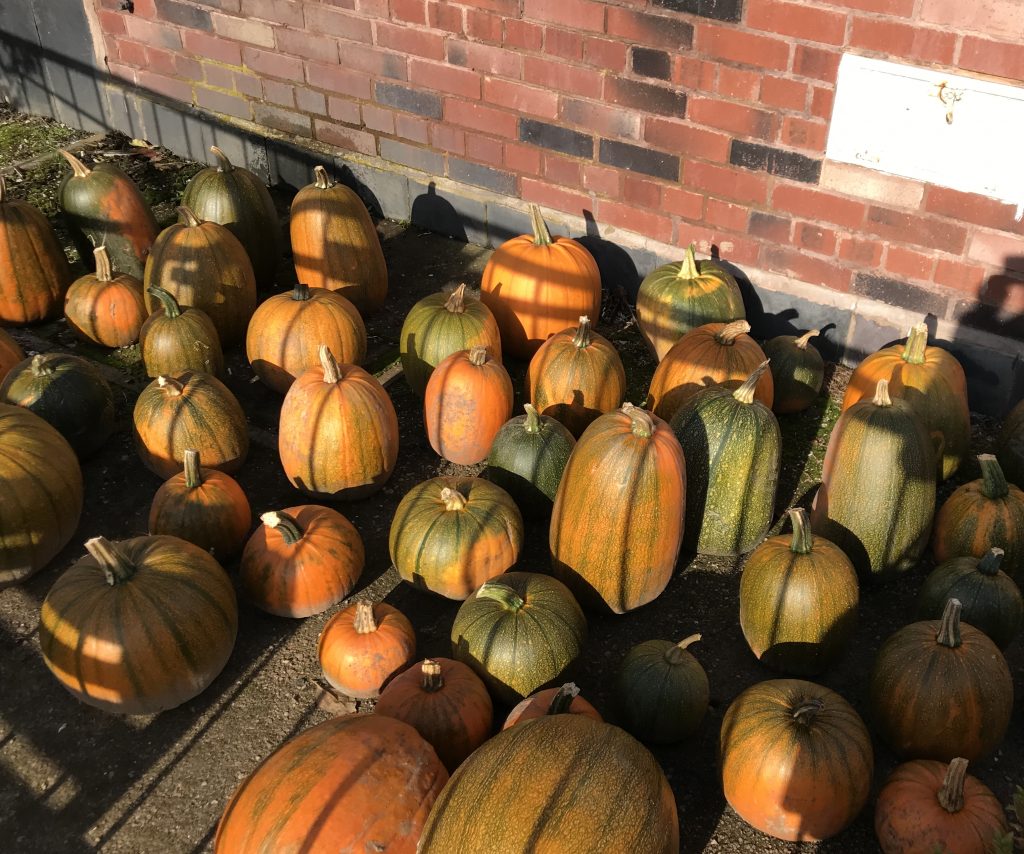 The harvest of pumpkins at Sandwell Park Farm

Meanwhile – away from the dream of a Victorian kitchen garden and to the reality of an allotment owned (rented) by a time-poor working parent – this is what a summer of work/child rearing has done to my plot. Cut flowers gone to seed; grass left to grow tall and nettles as tall as me in the wilderness. 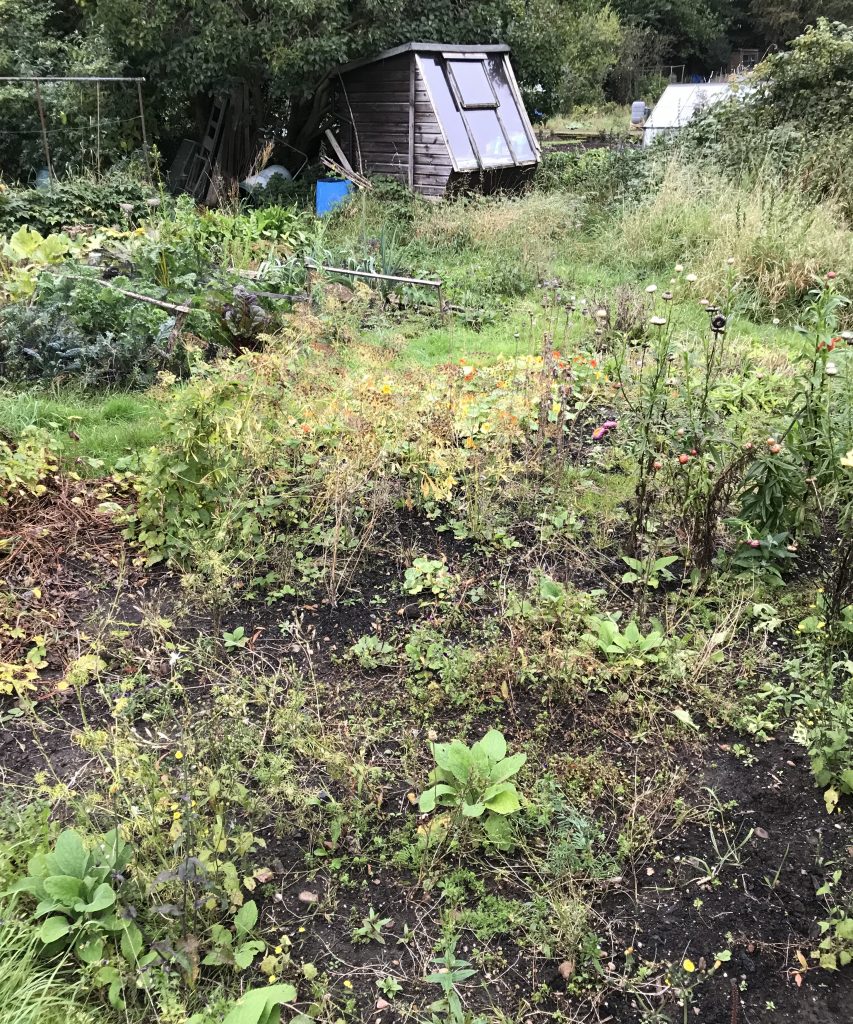 Time to start clearing this lot up

Don’t be fooled though, it’s not as hideous as it looks. I’ve ripped the tall grasses from the strawberry patch, cut back the brambles from around the soft fruit and had a good thwack against the nettles and brambles by the shed. Matt’s taken the hops down – their colouring always a sign of autumn – and with them the beans, sunflowers, courgettes, cornflowers and ammi have gone too. 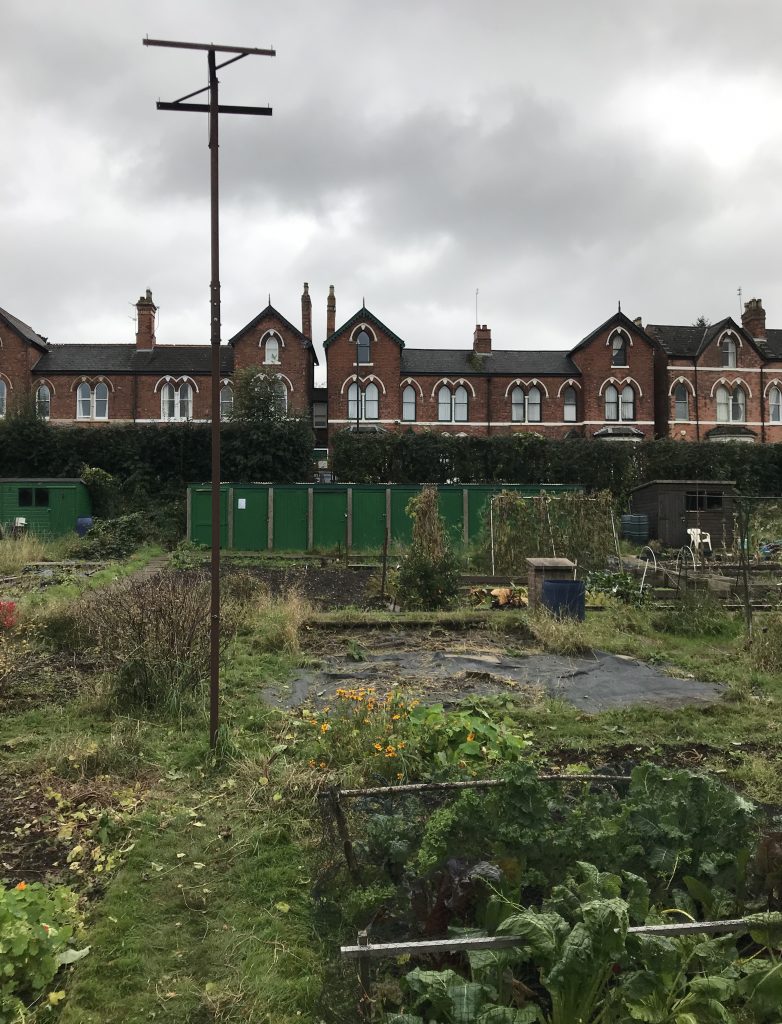 The hops are down, as are most of the annual vegetables and cut flowers

What’s left is still cropping well. If our plot was sectioned out into tiny little beds then it would look like a bonanza – but as it is, with our two massive growing areas, it’s the weeds and debris from the season that you see first whilst the good stuff loses its impact. The pentland brig kale is the best I’ve ever grown, sistered with russian red kale, cavolo nero, spinach beet and chard. There’s still leeks and parsnips to be had, plus the dahlia, chrysanthemums and strawflower are (remarkably) still giving up a harvest – I’ve been picking them since August, I think, so that’s a good 10 weeks of colour. 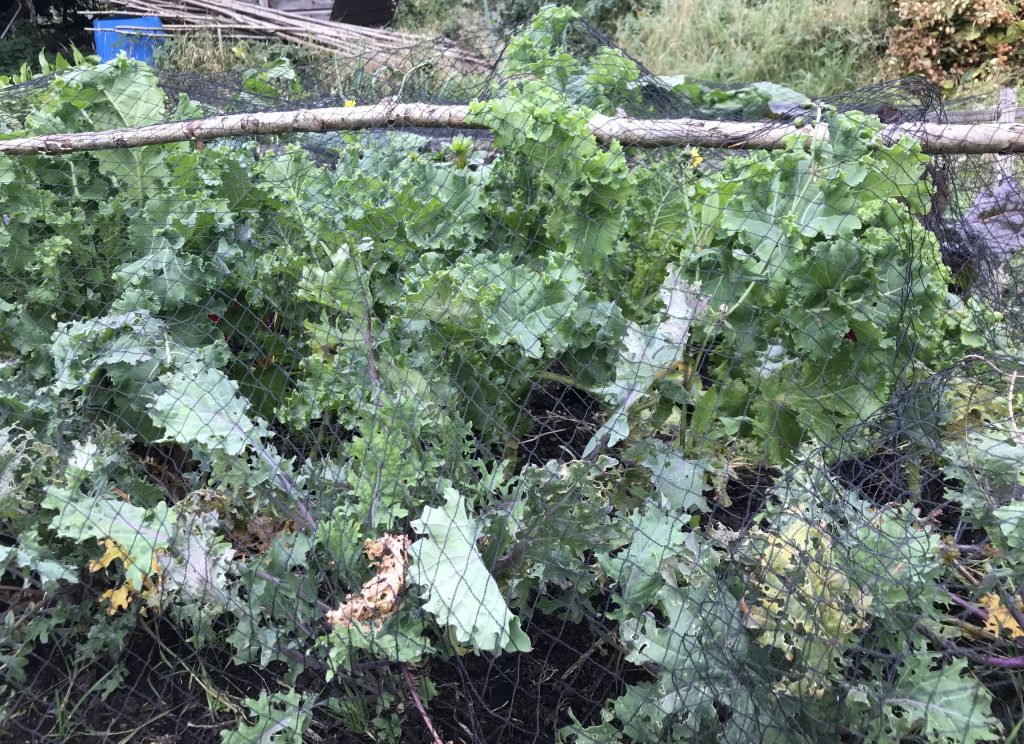 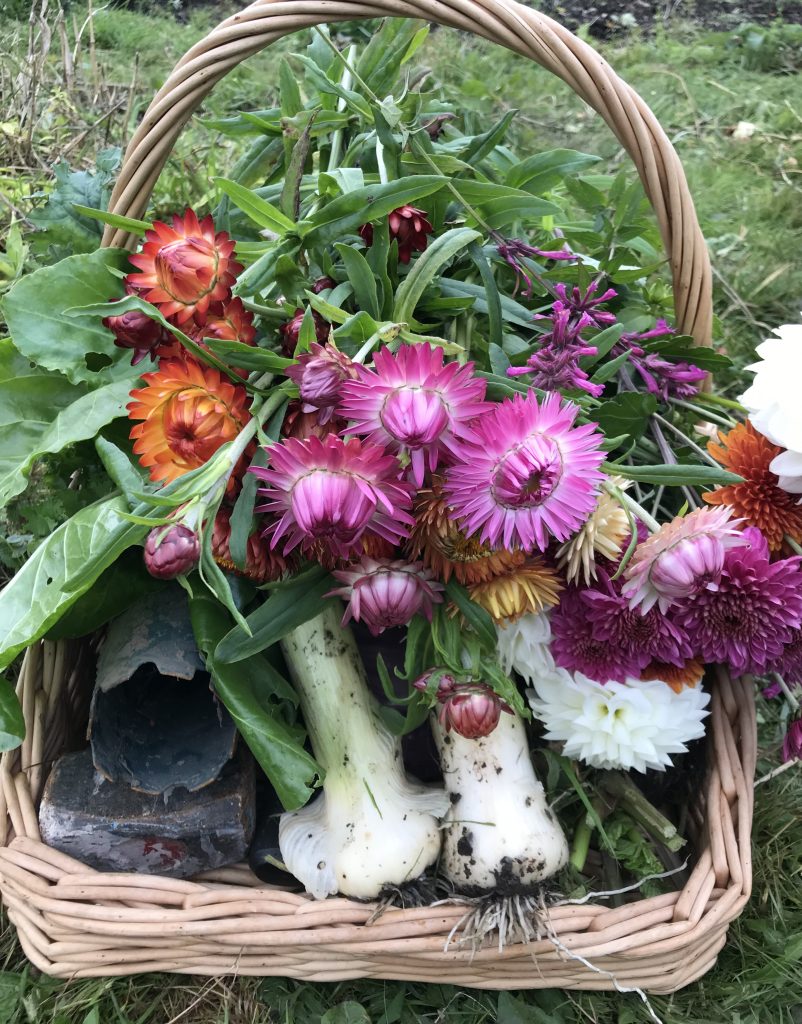 Strawflower give welcome colour to a dreary day

Whilst Harry is napping I devote an hour to a favourite October activity – shelling and toasting cobnuts for munching with a glass of something. To gather a fistful of papery cobnuts and smell them is the inhale the very essence of autumn. It’s the scent of woodland and Castlemorten Common, both fresh and festering, all rolled into one unpromising-looking brown husk. I used to waste time double-peeling cobnuts but now I leave the final layer of papery brown skin on, reckoning that it’s all fibre and therefore good for me. These cob nuts are not wild-food (they came from Waitrose, for goodness sake) but the finding and processing of them awakens a cultural memory of an older, slower way of being. 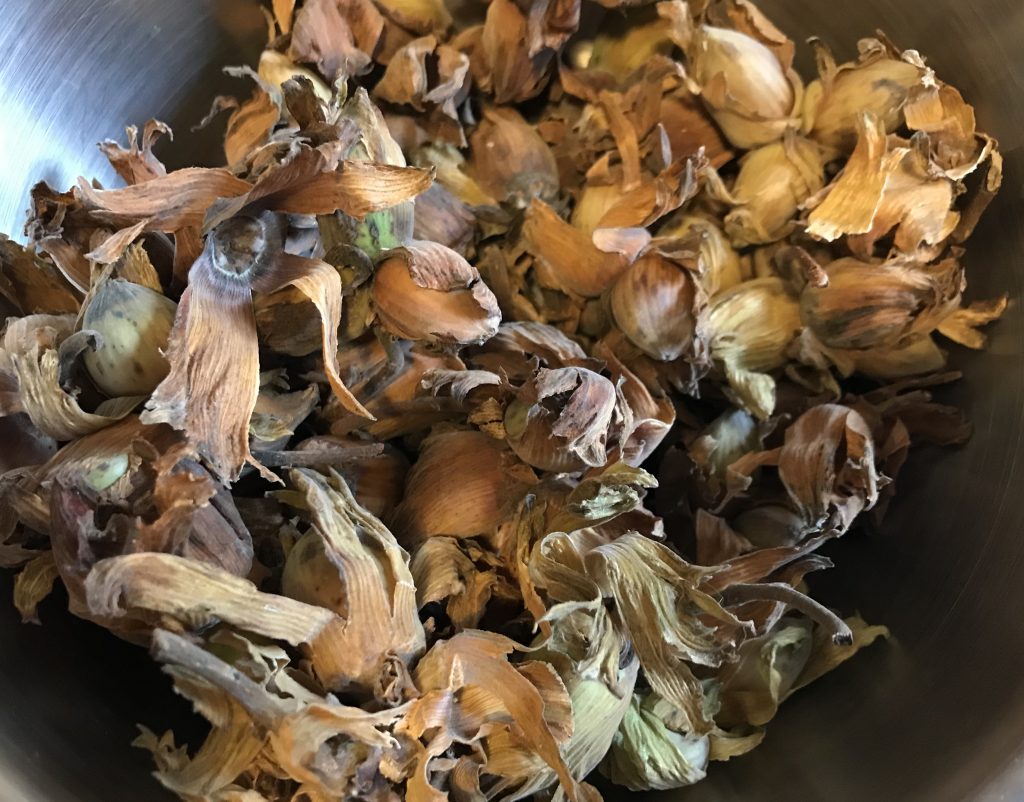 The joy of a bowl of cobnuts, waiting to be shelled 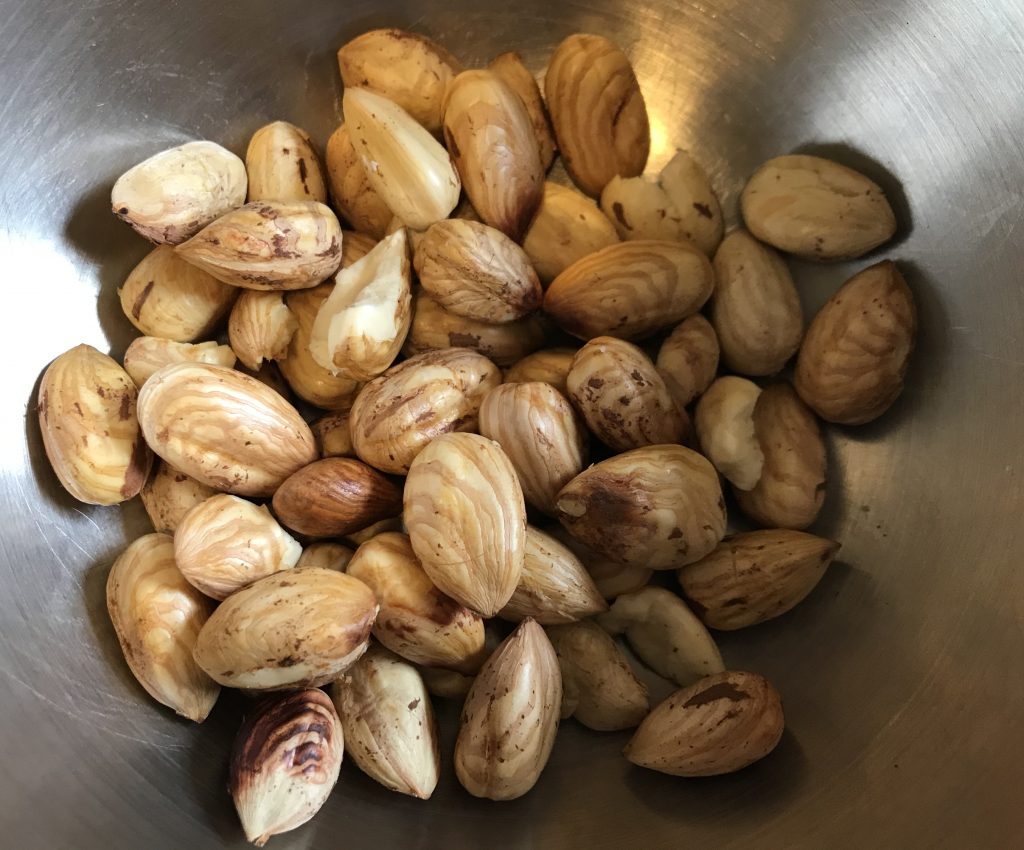 Reading: The Wild Life by John Lewis-Strempel, the account of an eccentric posh Hereford farmer who literally lives off his land for a year. A love letter to the Western valleys of my ancestors.