I spent several minutes this morning flicking back through photos from this time last year. Aside from an extremely smiley baby who has now become a very active toddler, the main difference to notice is how late our produce is compared to last summer – this time in 2018 we were harvesting spinach, kale, runner beans, sunflowers, dahlia AND chrysanthemums. This year’s cooler spring, and cooler summer come to that, means that climbing beans are still weeks away. The broad beans, on the other hand, are fantastic: tall, bug-free, but the beans still small and tender. Growing some in pots from February, with a second lot direct sown later in April, has extended the harvest very successfully. One thing that hasn’t changed is the blackcurrant harvest, which returns like clockwork during Wimbledon fortnight. 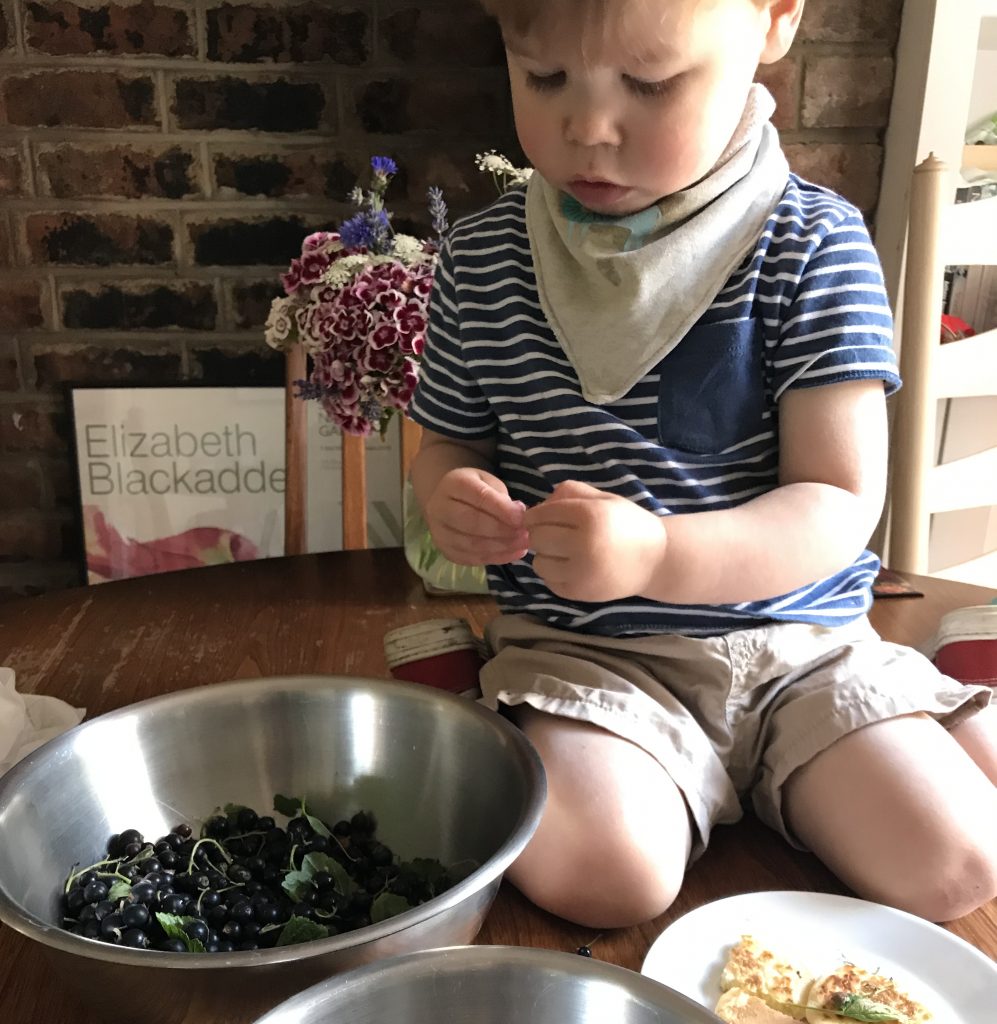 Harry likes to get involved with processing the produce

The star of June was the sweet William. Although it’s now going over, its warm, musky, slightly spicy scent still fills the air. Taking its place now are the cornflowers, lavender and ammi, whose ethereal tall stems are to me the essential sight of summer. These are the best cornflowers I’ve ever grown – usually they are short and stunted, but somehow this year they are dense, tall and abundant. 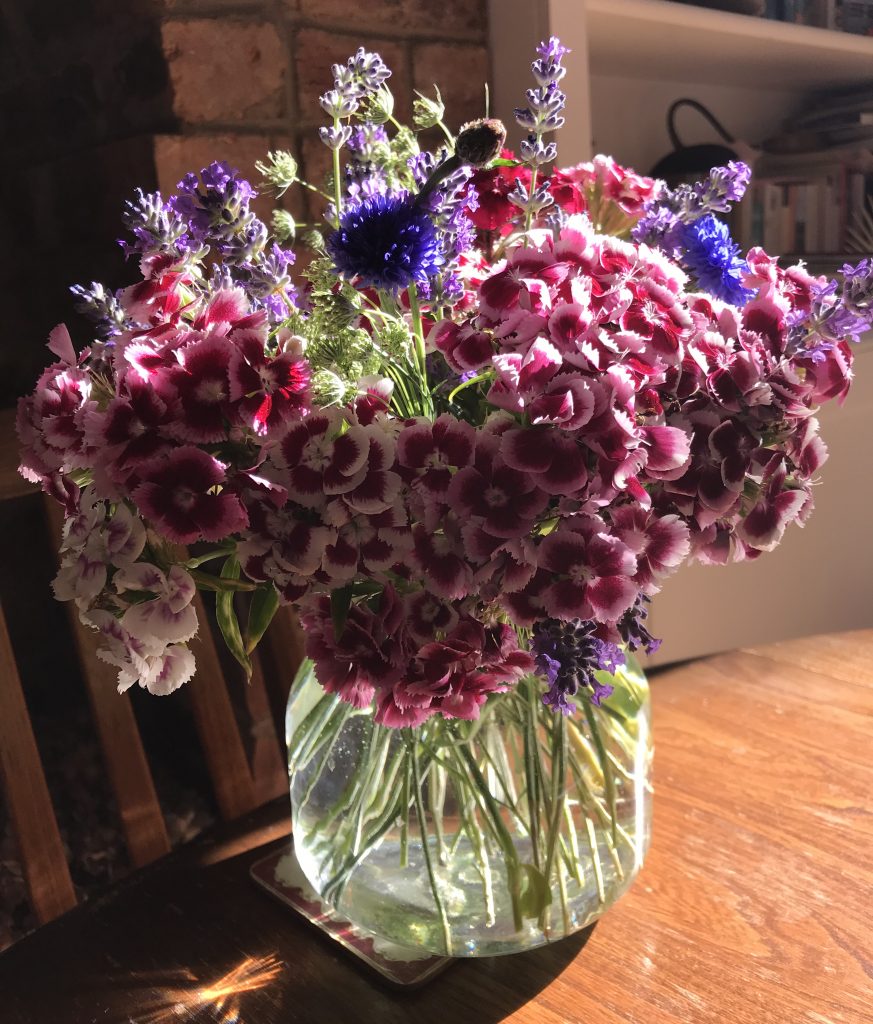 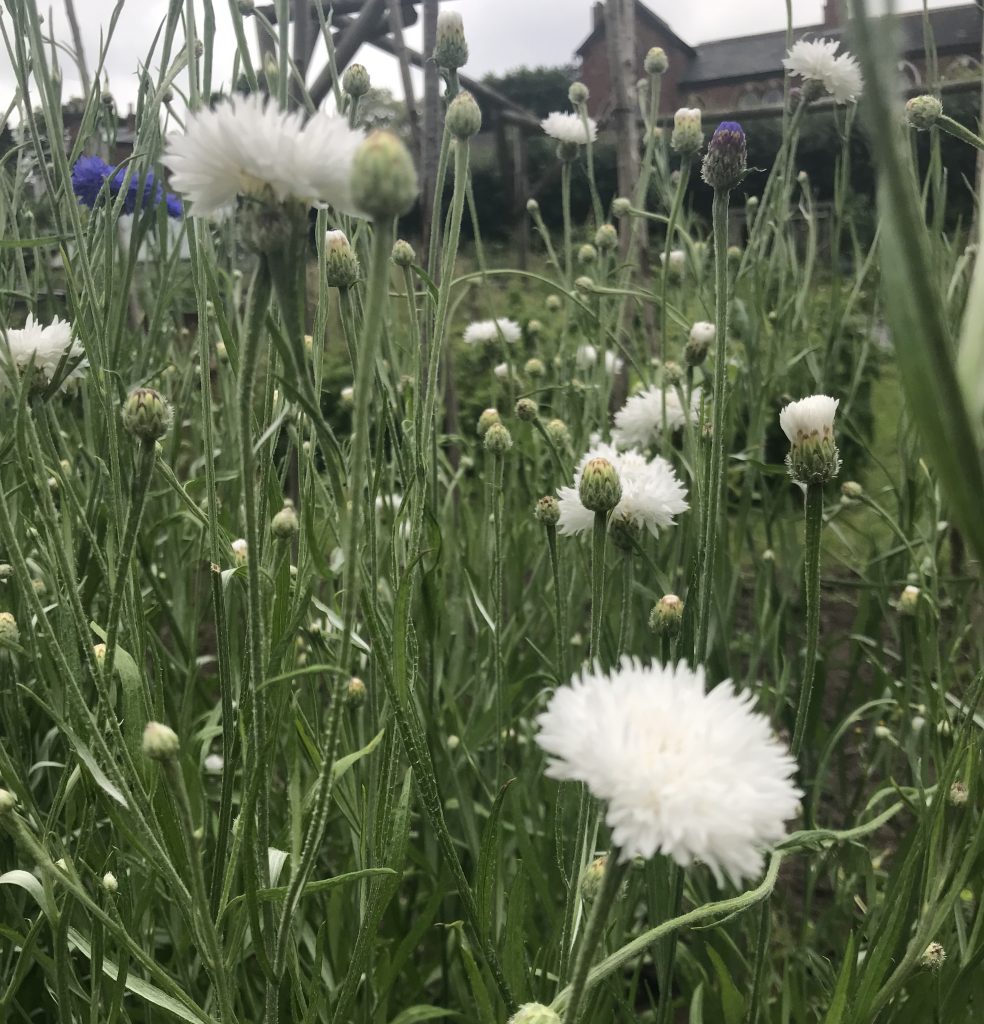 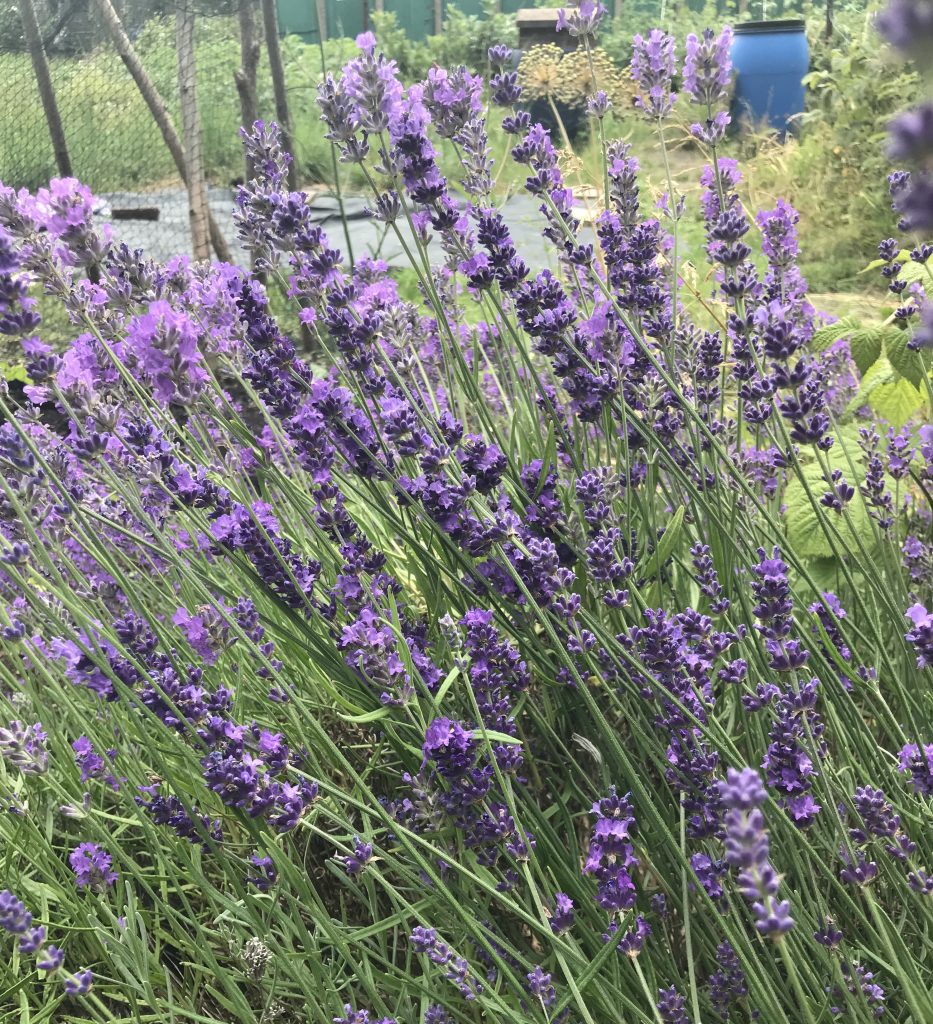 The lavender is vast and hums with bees 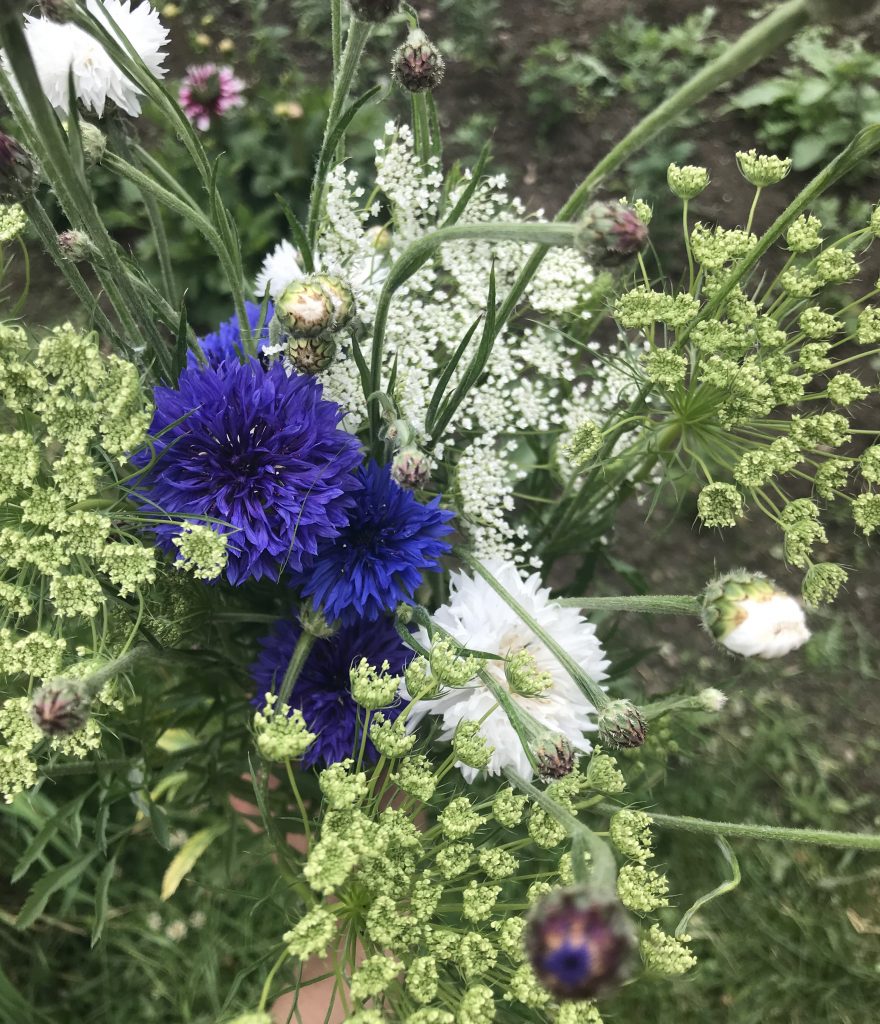 Cornflowers and ammi – a taste of the country, in the heart of the city

The strawflowers are also now coming into bloom and are without doubt the weirdest thing I’ve ever grown. Like dried flowers even when still in the grown, the flowers are crisp and dry, with no scent at all. They take me right back to 1980s dried flower arrangements; a bit of retro kitsch. 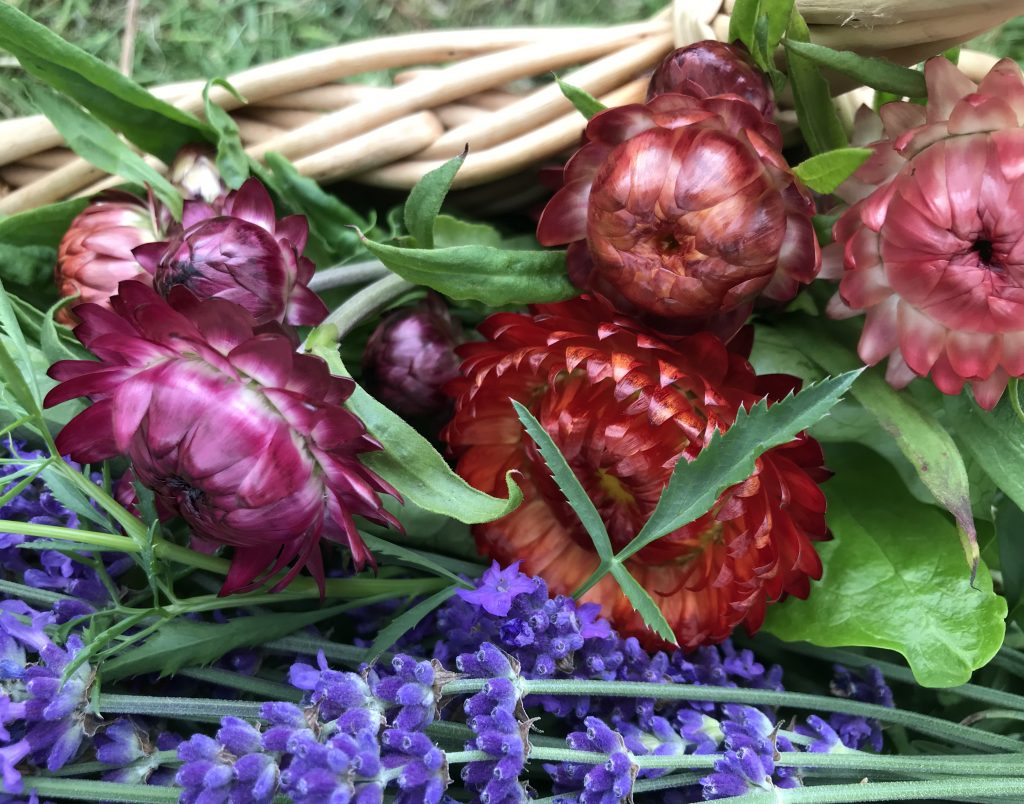 Strawflowers are the strangest thing I’ve ever grown

Life is busy again at the moment, with two major works projects, lots of other smaller ones, and a toddler to keep alive. So whilst we’re waiting for the real summer goodies – the French beans, runner beans, borlotti, courgette and squash, and raspberries – the twice-weekly baskets of lettuce, broad beans, blackcurrant and cut flowers are still a welcome reminder to be still, absorb the moment and appreciate the richness of the season. 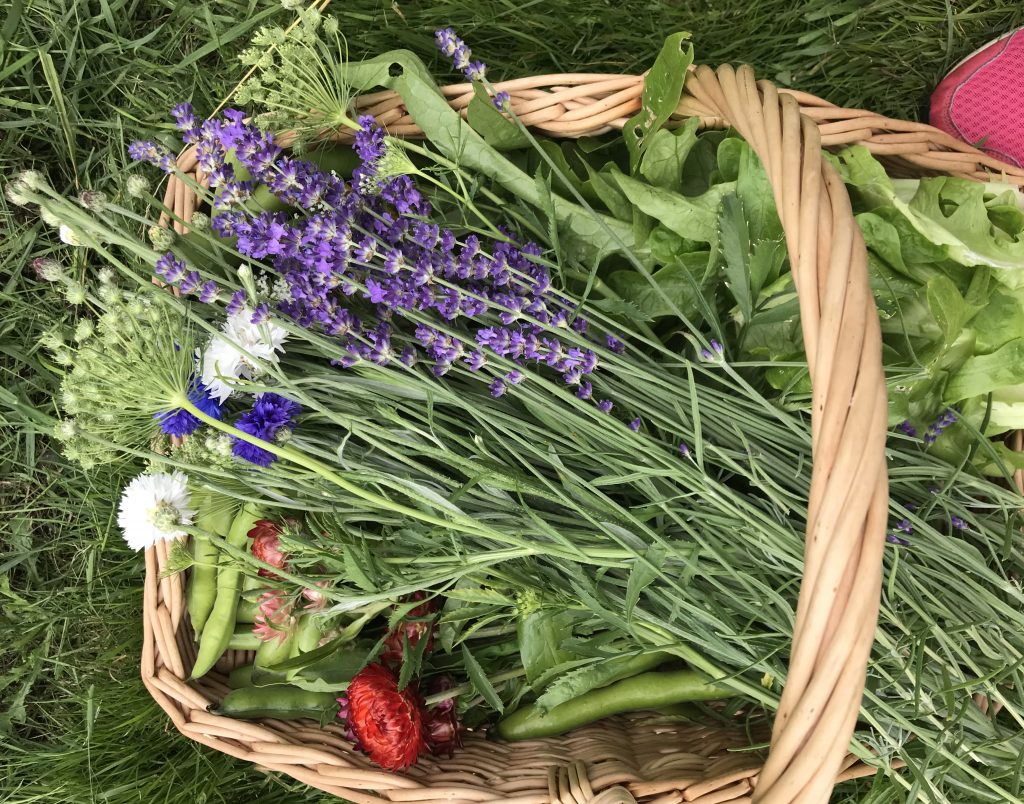 Cooking and Eating: Lots of summer eating now: salads of broad beans and feta; burnt red peppers with tomatoes and beetroot; crunchy green lettuce with parmesan and lemon. Peach sherbet (ice cream) made by blitzing poached peaches with their syrup and whipped cream, then freezing. Pissaladiere, fougasse, meringues. Lots of supermarket-bought strawberries and raspberries, which I am not happy about – so much plastic waste – but there are few other places in Birmingham to buy them.

Also: Slipping back into pre-baby working ways, with full days in Warwick for Imagineer’s Bridge project (imaginebridge.co.uk) whilst simultaneously planning Birmingham Weekender. Time spent at home is precious, like last Sunday’s Picnic in the Woods at Warley Woods, where we happily bumped into friends and neighbours.