We snuck away for a late summer holiday last weekend, albeit one that felt distinctly autumnal. The Lake District in September lies on the cusp of the seasonal turn, with golden bracken, reddening leaves and low afternoon sun. We had a day of culture in the brilliant Blackwell Arts & Crafts house, then a day of fresh air in the Borrowdale valley. Matt was transfixed by agile fleet-footed fell runners…and I reflected that love makes you do strange things (a few years ago I never would have gone out of my way to watch a running race). 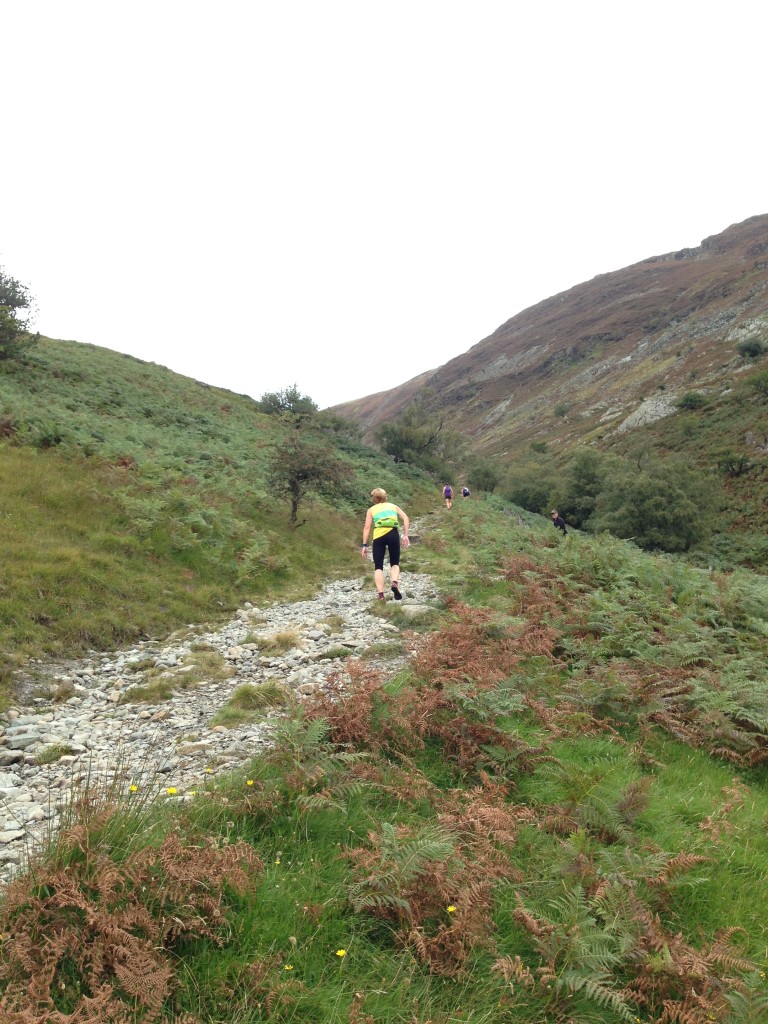 Sheep amidst an abandoned mine building 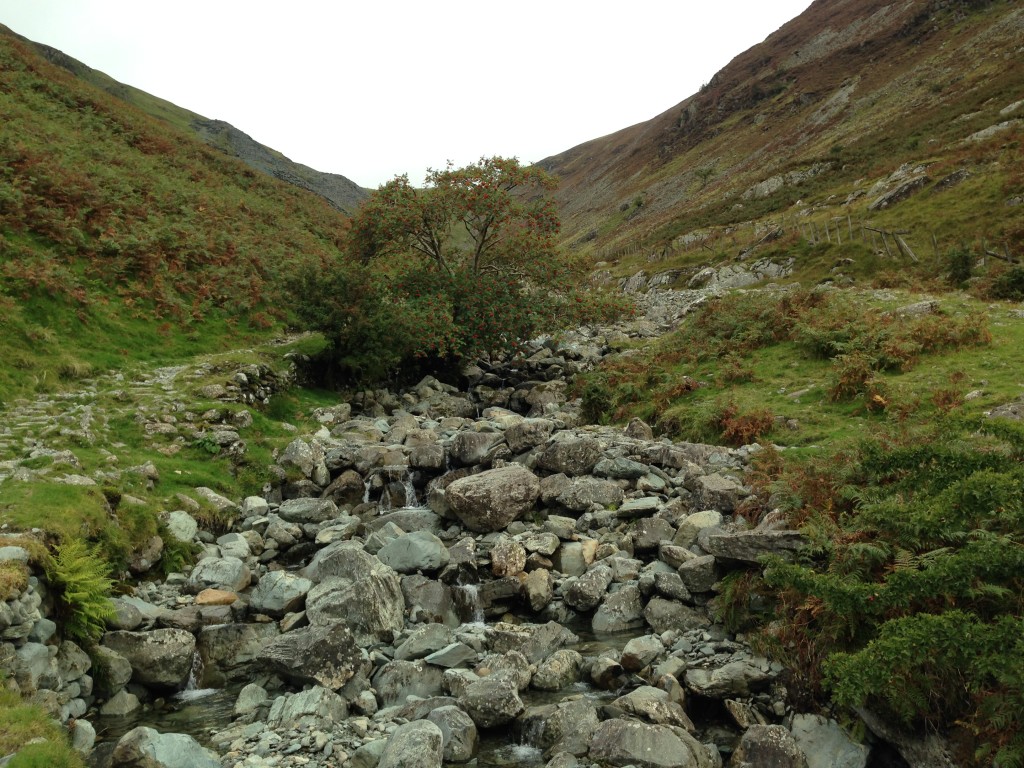 Water heads down the fell

I am grateful for the newly chilly days. It’s not cold as such, but the dreadful heaviness of August has been replaced with a more sprightly energy. On the allotment, the courgette glut has slowed down and the tomatoes are pretty much over, though there’s no end in sight to the late summer blooms.

In this September is-it-summer-or-is-it-autumn period, cooks and gardeners traditionally get down to pickling, chutneying and jamming, an activity that does indeed deal with the immediate problem of gluts – except that, in our house, we struggle to make a dent on even a few jars of preserves. I have several pints of ‘glutney’ from several years ago gathering dust in the bottom cupboard; they’ve now moved house twice. Undeterred, I still rustle up a few jars every year, transfixed by the knowledge that veg/fruit + sugar + vinegar = longlife food.

Anyone who eats out regularly knows that there’s a new fashion for pickles, inspired by the Scandi food craze. The fresh crunch of raw, pickled vegetable is everywhere, from a gherkin on your dirty burger to the chili-spiked carrot that adorned the pastrami bagel I enjoyed in Rotterdam back in May. Pickles are so much easier than chutneys or jams – there’s no boiling or finding setting points, it’s merely a question of brining some veg, making a vinegar-sugar pickling liquor, adding one to the other and hey presto, job done.

So when the courgettes were in full glut mode a few weeks back, I got busy making this fennel, lemon and chilli scented pickle. First I cleaned and sterilised my Kilner jars by washing in soapy water, rinsing, then putting them in a hot oven (200c) for 20 minutes. In the meantime, I chopped courgettes into batons, tossed them in salt and left them to drain for two hours. 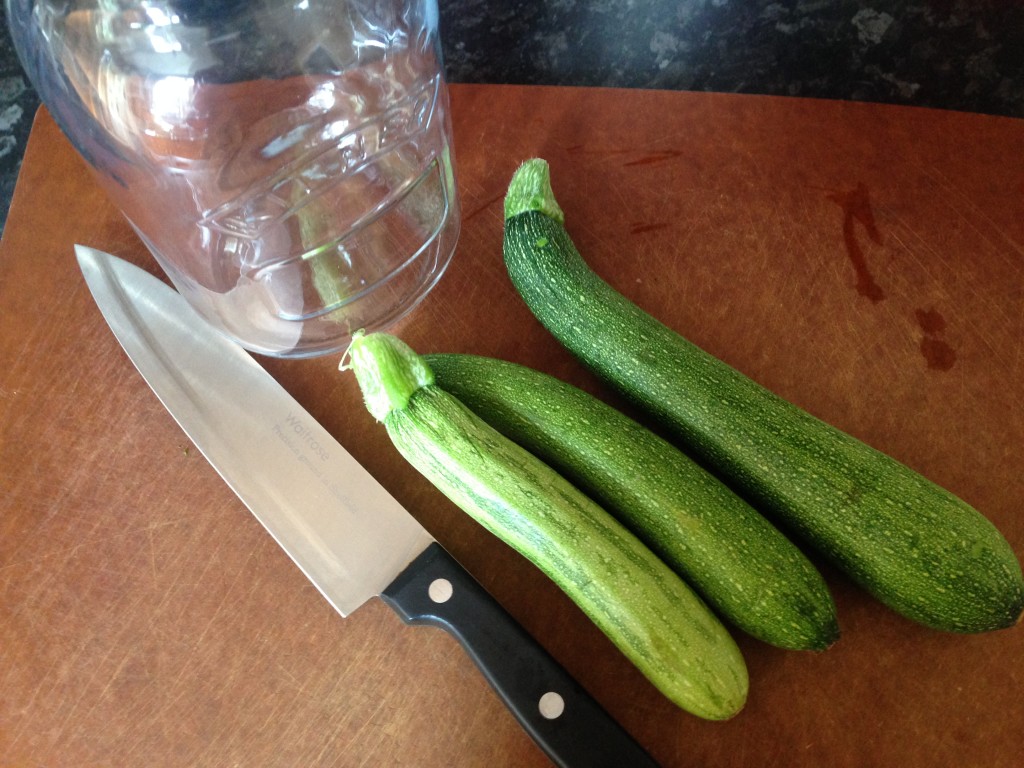 Take courgettes and a jar… 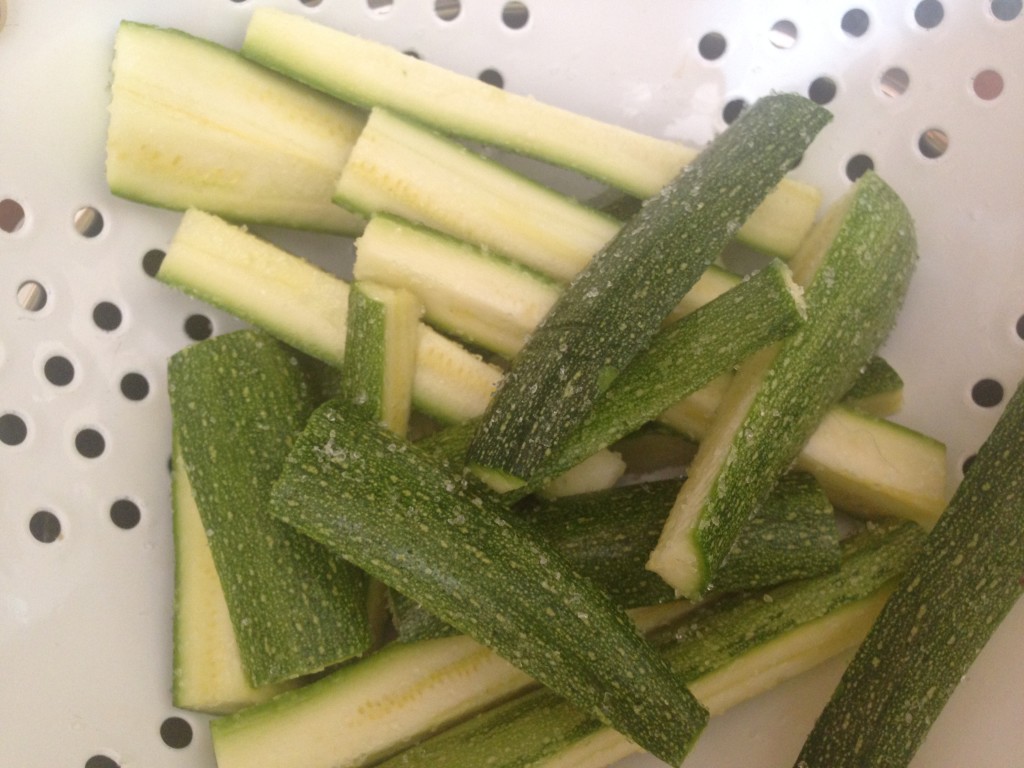 Salt the courgette batons and leave to drain

Loads of water comes out of the courgettes, meaning that the end pickle has a pleasing crunch. The salt also begins the preserving process on the veg. 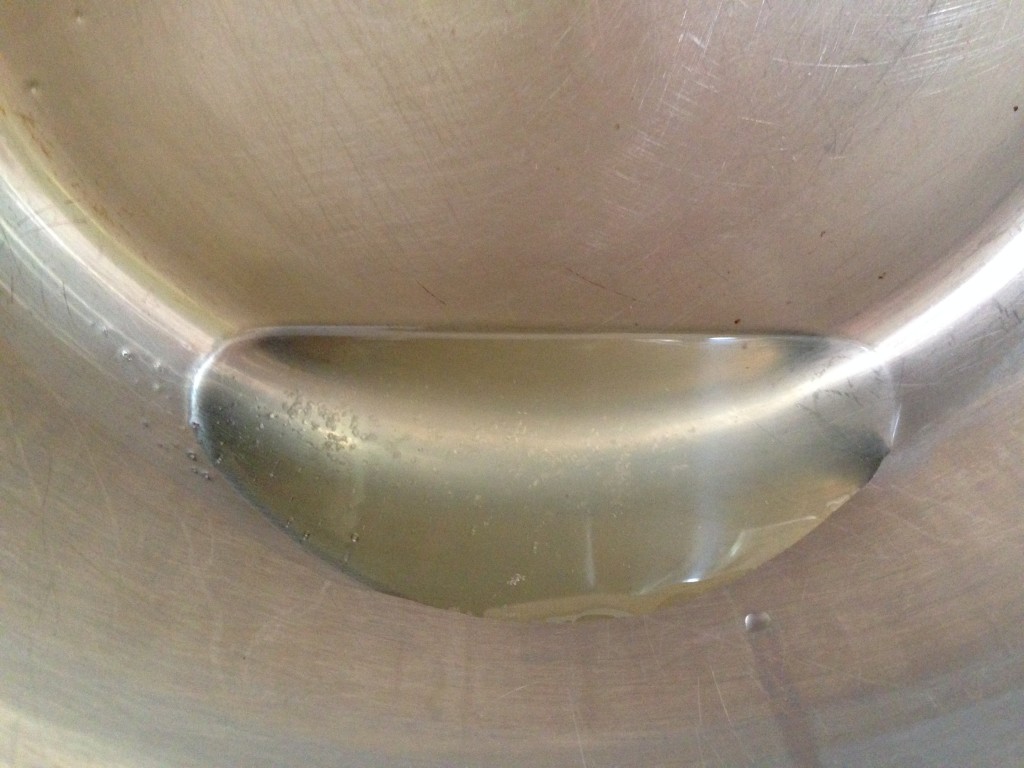 Alot of liquid will seep out…

The courgettes were then rinsed and drained on kitchen paper to remove any excess water. 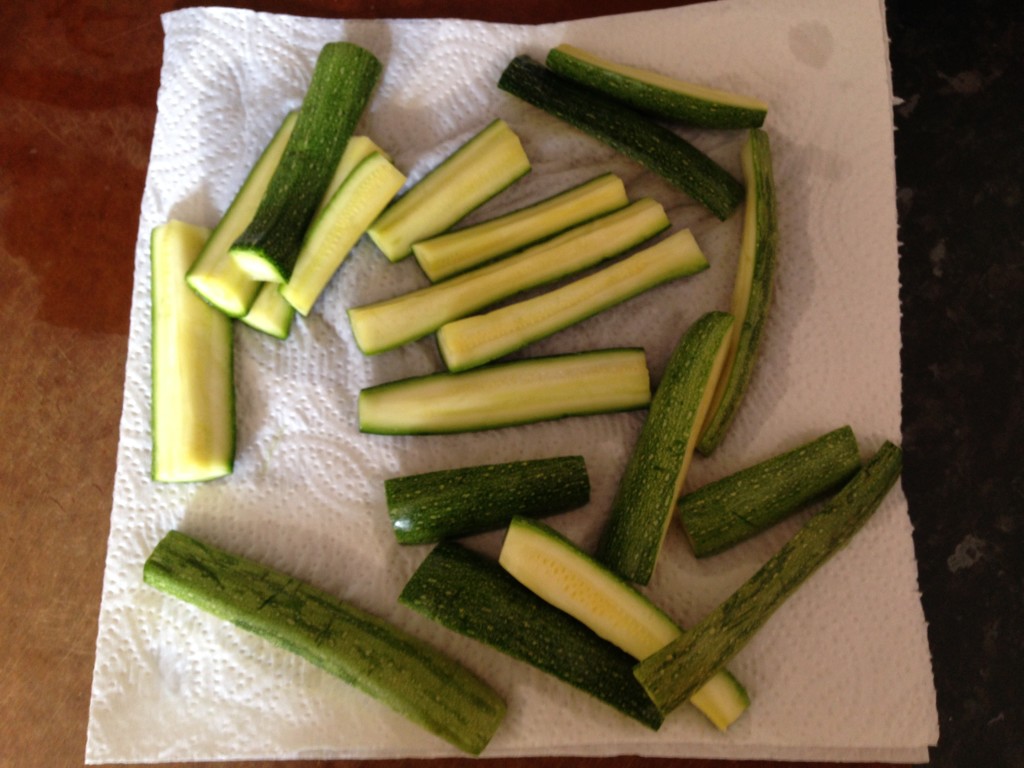 Rinse and drain the courgettes

Now for the fun bit: the liquor, which both preserves and flavours the pickle. I used white wine vinegar, sugar (not shown), fennel seeds, lemon juice and peel, garlic and a red chilli. 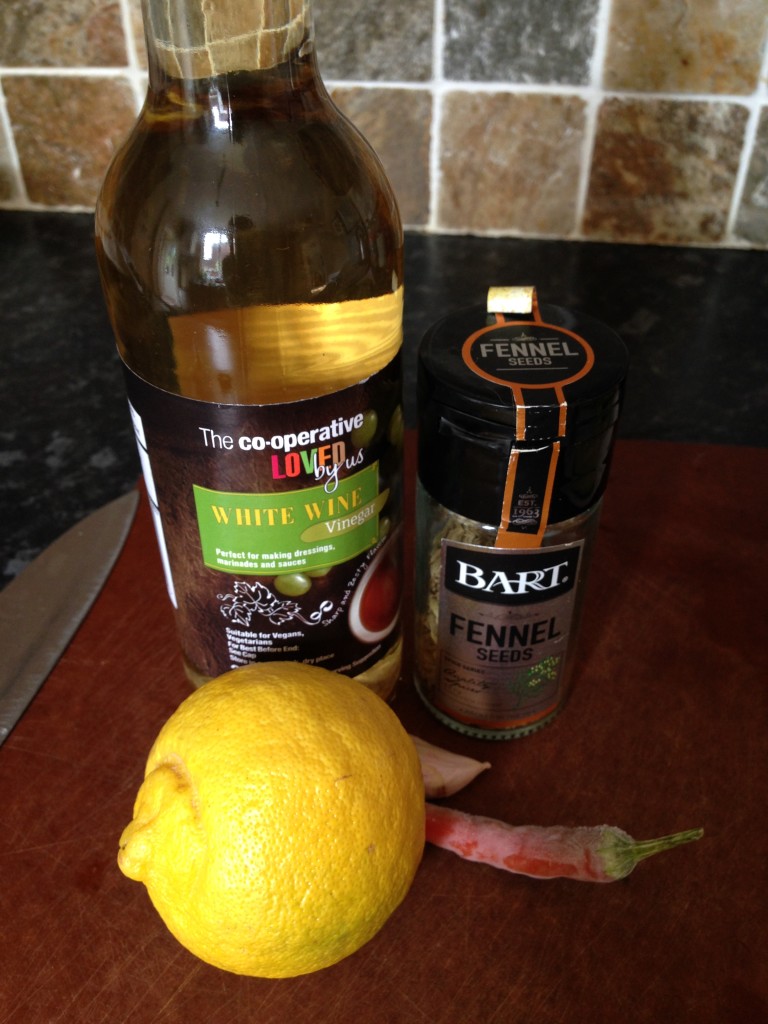 Simply heat the sugar, vinegar and lemon juice until just boiling, so that the sugar dissolves. 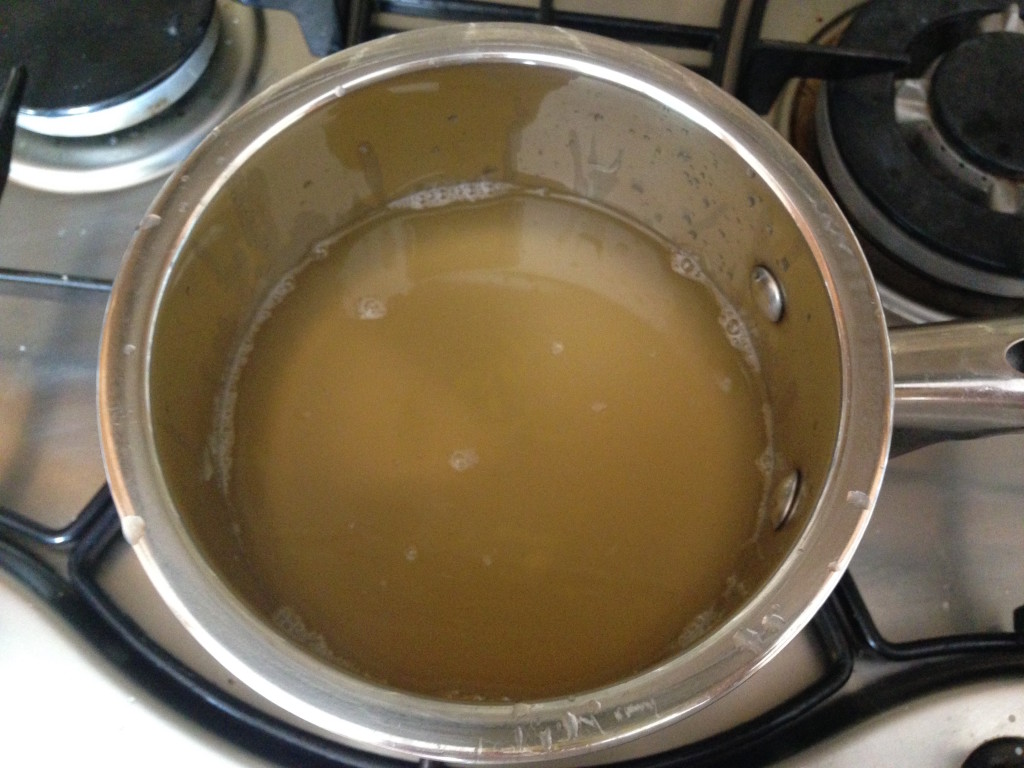 In the meantime, push the courgettes into the jar along with the fennel seeds, lemon peel, whole garlic (no need to peel) and the whole chilli. The hot liquor is poured over the top, pop the lid on and that’s it! The pickle cools in the jar and is then stored for a month or two to soften the vinegar flavour. I’ll report back in a few weeks as to if it’s any good or not… Pour the hot liquor onto the courgettes along with the fennel, garlic and lemon peel, then leave to cool

1 red chilli (or more if you like it hot)

1 or 2 Kilner jars or jam jars

First prep your Kilner jars: wash them thoroughly, rinse, then put into a hot oven for 200c for about 20 minutes.

Trim the courgettes and chop into sizeable batons. Toss them in the salt and leave to drain in a colander for at least two hours. Rinse under the cold tap then drain on kitchen paper.

In a small pan, heat the sugar, lemon juice and vinegar until the sugar has dissolved and it is just boiling. Remove from the heat. Layer the courgettes in your jar(s) with the fennel seeds, garlic, lemon peel and chilli. Pour the hot liquor over the top to cover the veg. Give the jar a tap to get rid of any air bubbles, put the lid on and leave to cool.

Leave for at least a month in a dark place before eating. Will last for months.