I’m re-reading Elizabeth Howard’s Cazalet novels at the moment – it’s all country houses and gin at 6 – and so this weekend’s outing to Madresfield Court near Malvern felt particularly well-timed. Madresfield is an Arts & Crafts gem, a small-ish country house (still a family home) that served as inspiration for Evelyn Waugh’s Brideshead Revisited. Every year in March the gardens are opened to the local riffraff, and in we all trot to admire the thousands upon thousands of spring bulbs in the extensive grounds. Daffodil Sunday this year was blessed with blue skies; no doubt a few visitors left drunk on sunshine after the long weeks of winter gloom. 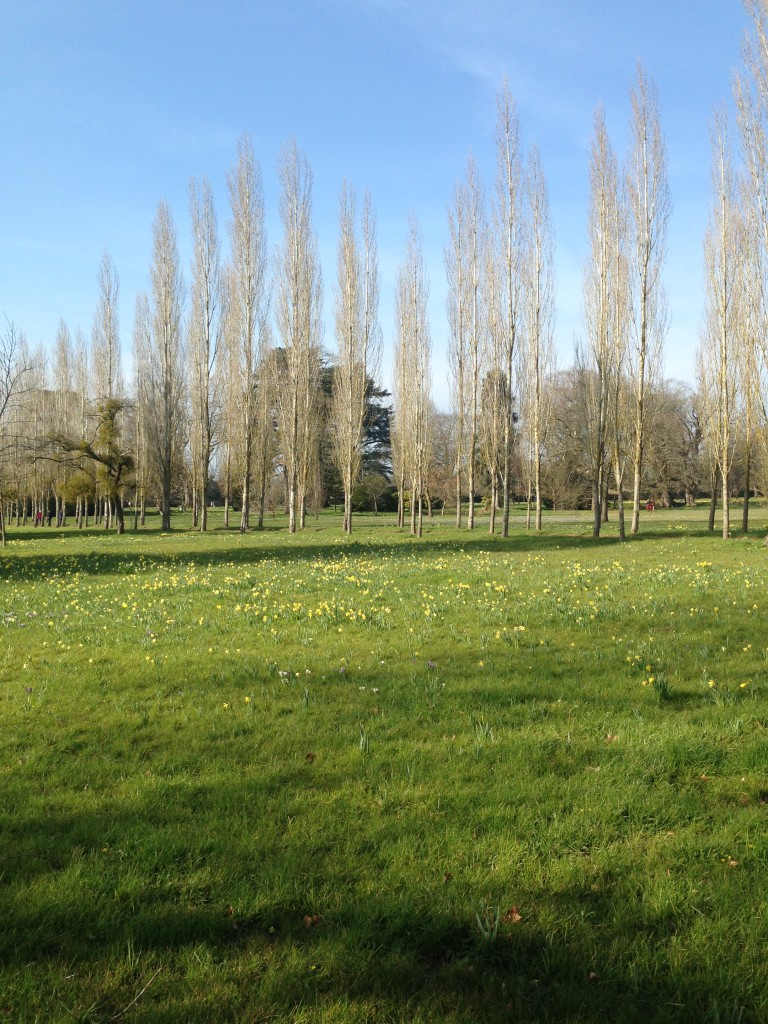 The extensive grounds of Madresfield Court 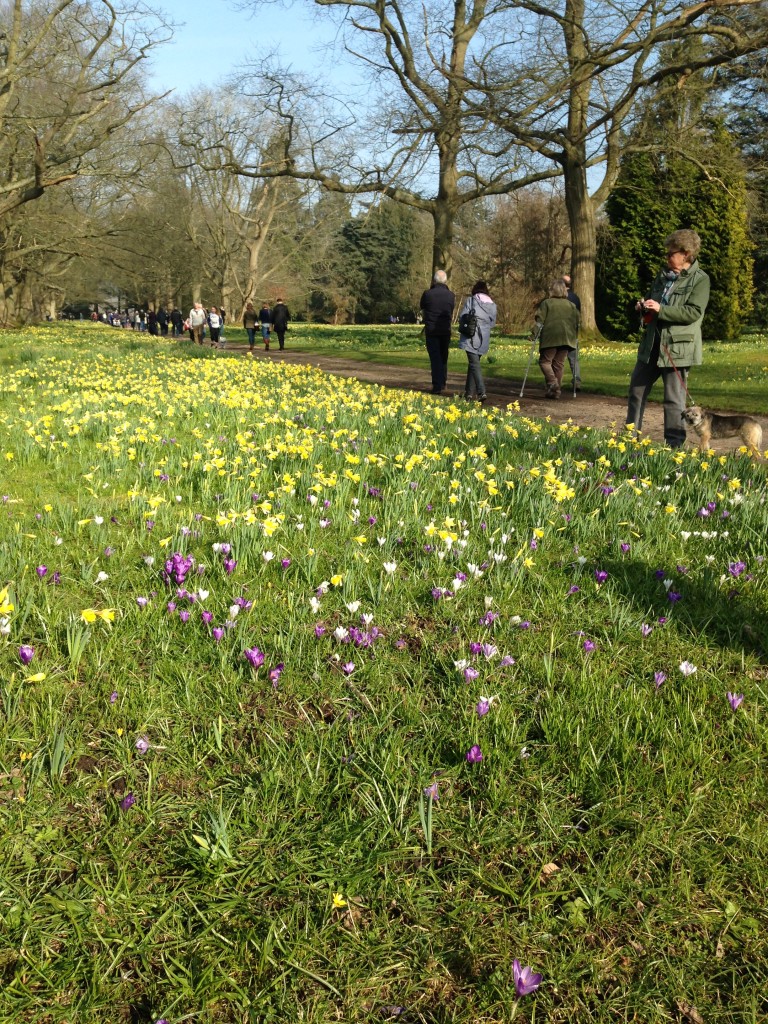 As well as the daffodils – and there really were thousands – it was heartening to see primroses in bloom and early wild garlic making its smelly presence known. Primroses to me are reassuringly old-fashioned; they are the bloom of mothers’ day posies and crystallised sugar flowers on Easter simnel cakes. 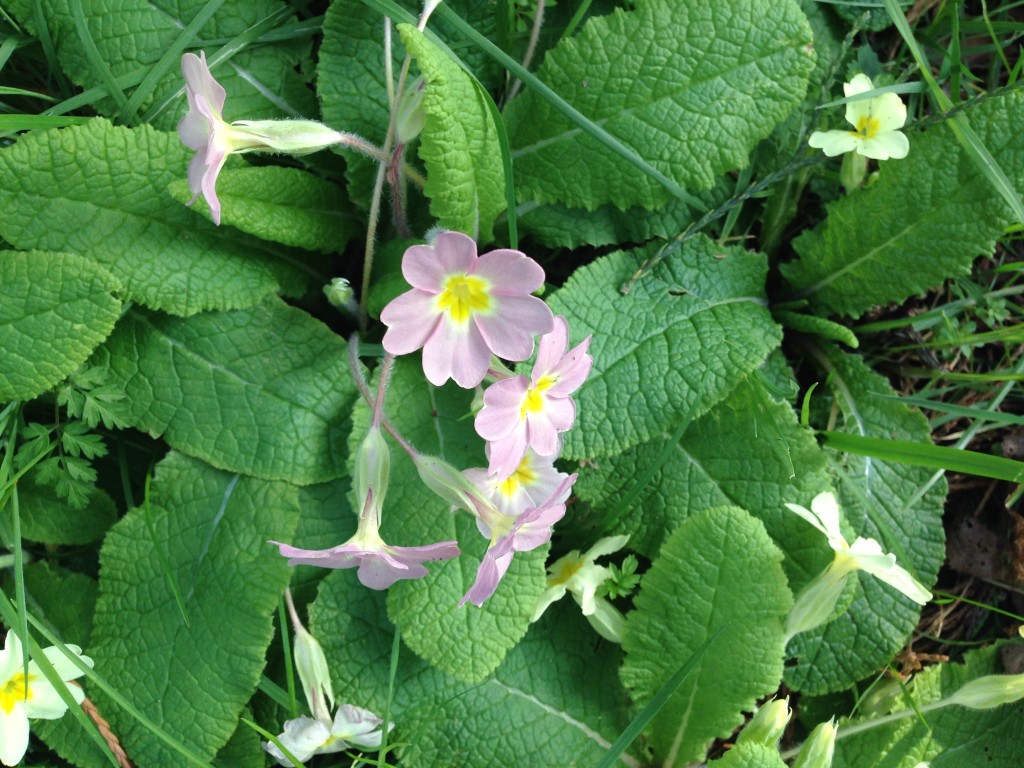 Primroses are out, pink and yellow 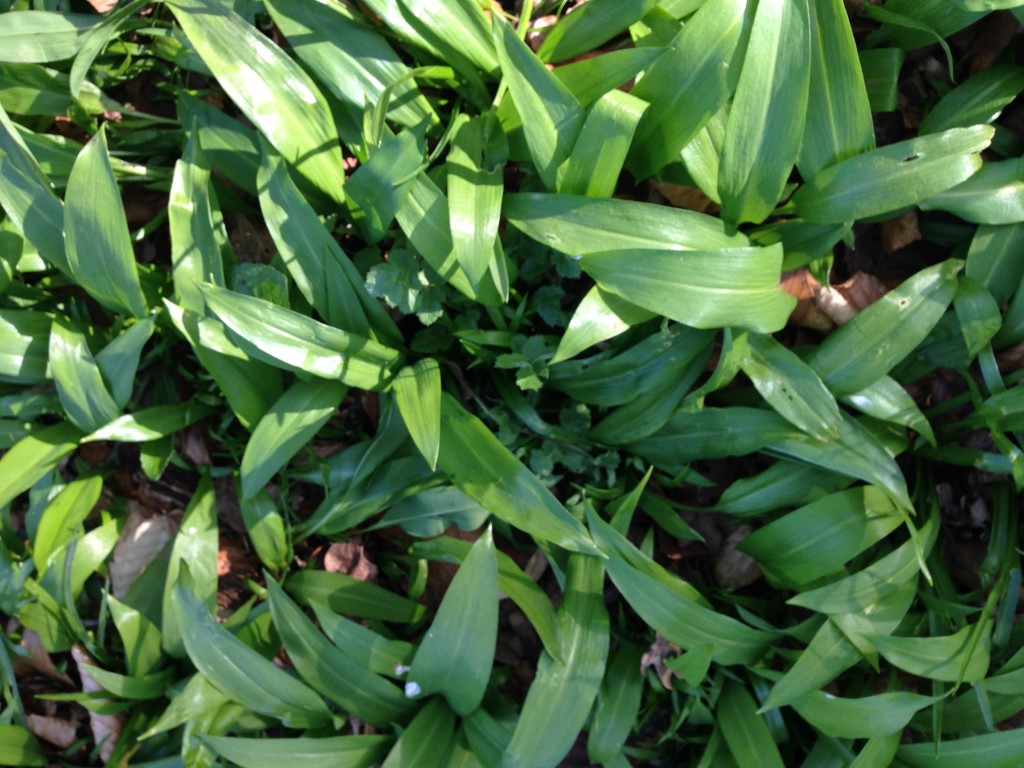 Young shoots of wild garlic. We could smell this from several metres away.

Of course a day trip to a country house is never complete without Tea. Madresfield have this down to an art: the stable block is taken over for a brilliantly English spread, manned by efficient local ladies armed with urns of hot water. In the kitchen I spied a production line of scones being dolloped with cream, and trestle tables were laden with plate upon plate of cakes. It may be 2016, but it could have been 1956 – and was none the worse for that. 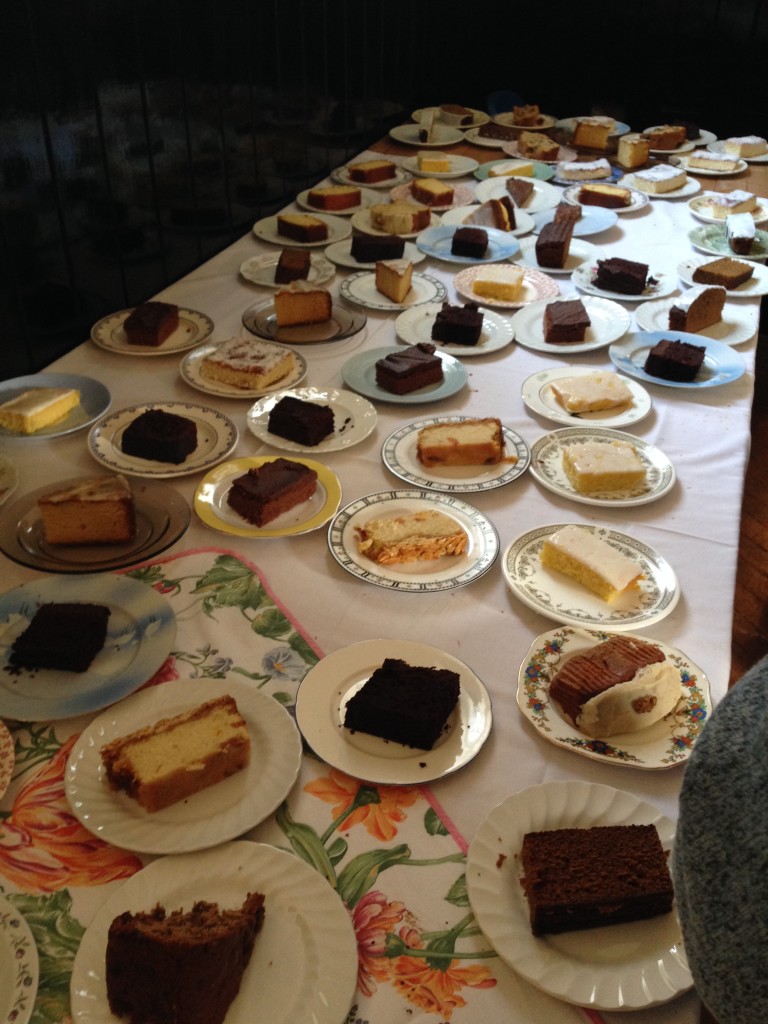 The cake spread in the tea-room

Our outing was a treat after an afternoon of allotment graft on Saturday. I finally got around to scrubbing the greenhouse – and did a terrible job of it. I blame my tools. We aren’t allowed to use hose-pipe and obviously there’s no hot water. Matt meanwhile dug over the reclaimed potato patch and had our annual bonfire. 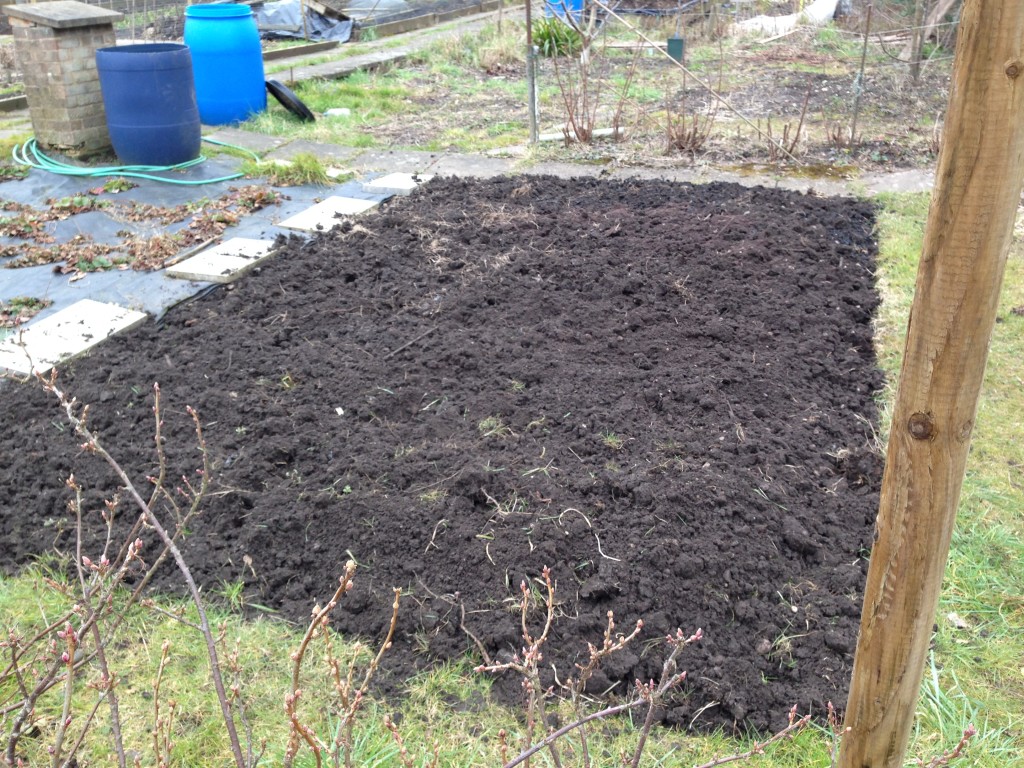 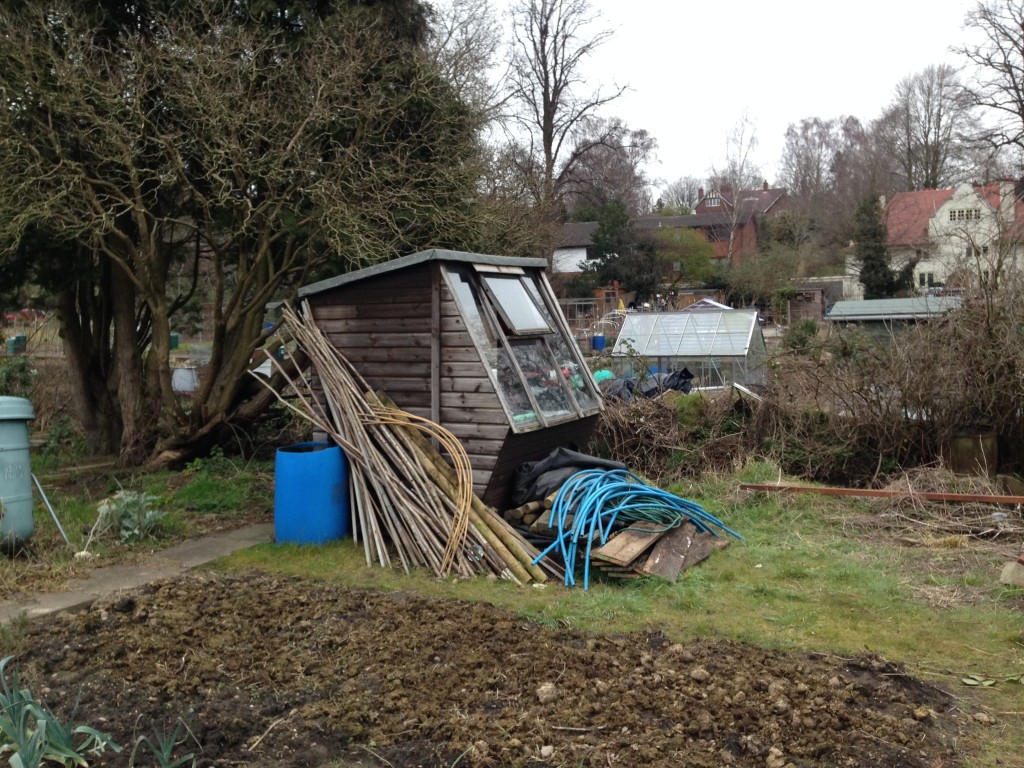 In the greenhouse I potted up new dahlias – a bright orange dazzler called Happy Halloween, and a Sarah Raven mix inspired by William Morris wallpaper: Totally Tangerine, Labyrinth and the naff-sounding Bacardi. 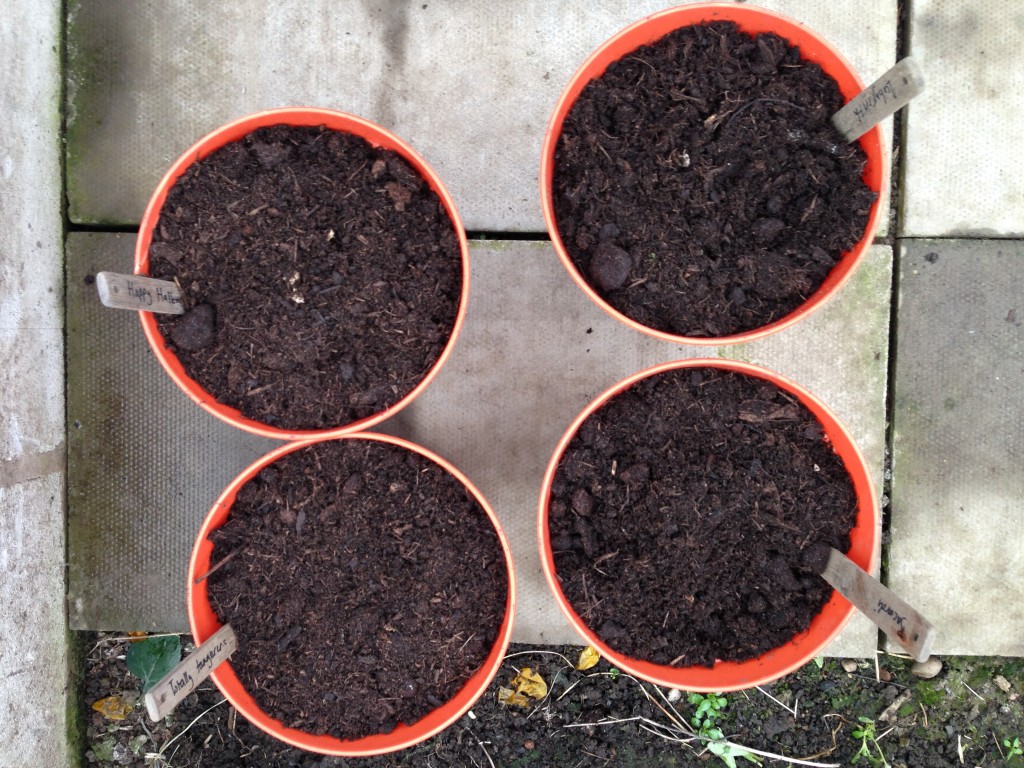 New dahlias have been potted up

Not much to harvest now though the leeks are still cropping – we still have babies, which is not that impressive given that they’ve been in the ground for the best part of 9 months. 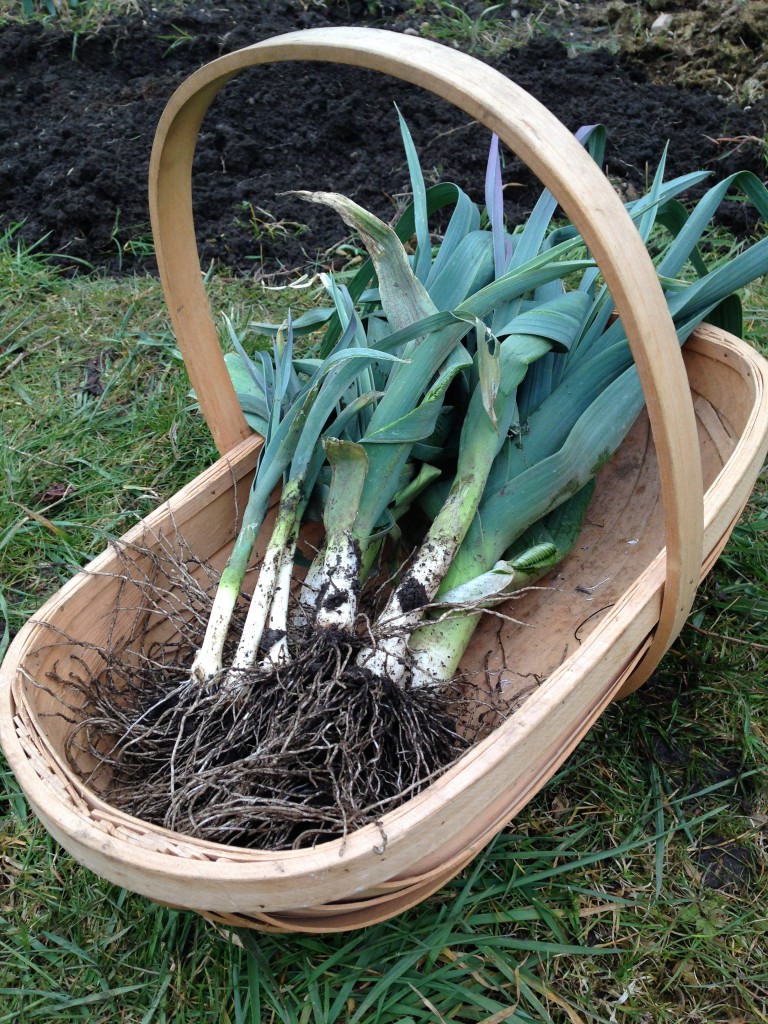 Still harvesting leeks – some of them tiny!

It will be weeks yet before we can plant outdoors – the allotment is still so cold that we have only one solitary daffodil in bloom – but we can plan. The herbs by the greenhouse need moving to make room for the cold frame, but where? To the potato patch? To the fruit bed? Whilst we ponder, I begin an inventory of my seeds and think about indoor sowing. I have 69 varieties to play with this year – and that’s before we get onto Grampy’s crysanth cuttings and the new dahlias. 69 varieties need a heck of a lot of windowsill/greenhouse/cold frame space. Allotmenting, I begin to see, is as much about logistics as its is knowledge of plants.