Our house needs a big red cross on the front door: once again we are diseased. Well actually it’s not that dramatic – potentially a bit of hand, foot and mouth, except Harry’s spots are on his bum, knees and mouth. I haven’t googled “bum, knees and mouth childhood illness” as I’m pretty certain it’s new to science. Whilst Harry’s potentially infectious and therefore off nursery, I’ve been mentally bouncing off the walls at being nearly-housebound. The worst is over so today we even went to Ikea out of desperation.

In the meantime, autumn has taken hold and Birmingham is bathed in golden colour. It’s good to pay attention to these things…the changing light roots me into the passing of the seasons. We’ve had a few frosts now which have finally meant the end of the cosmos – the Cosmos Purity and Dazzler gave me blooms from June to November, which is pretty impressive. 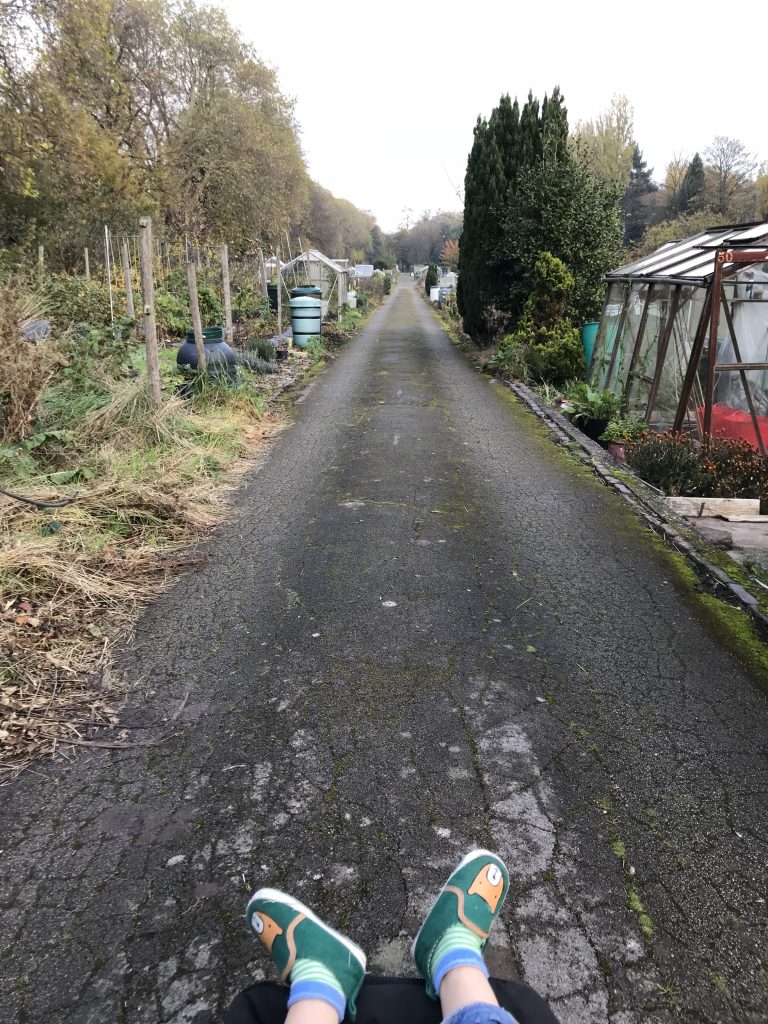 My allotment visits look like this now, meaning it’s almost impossible to get anything done 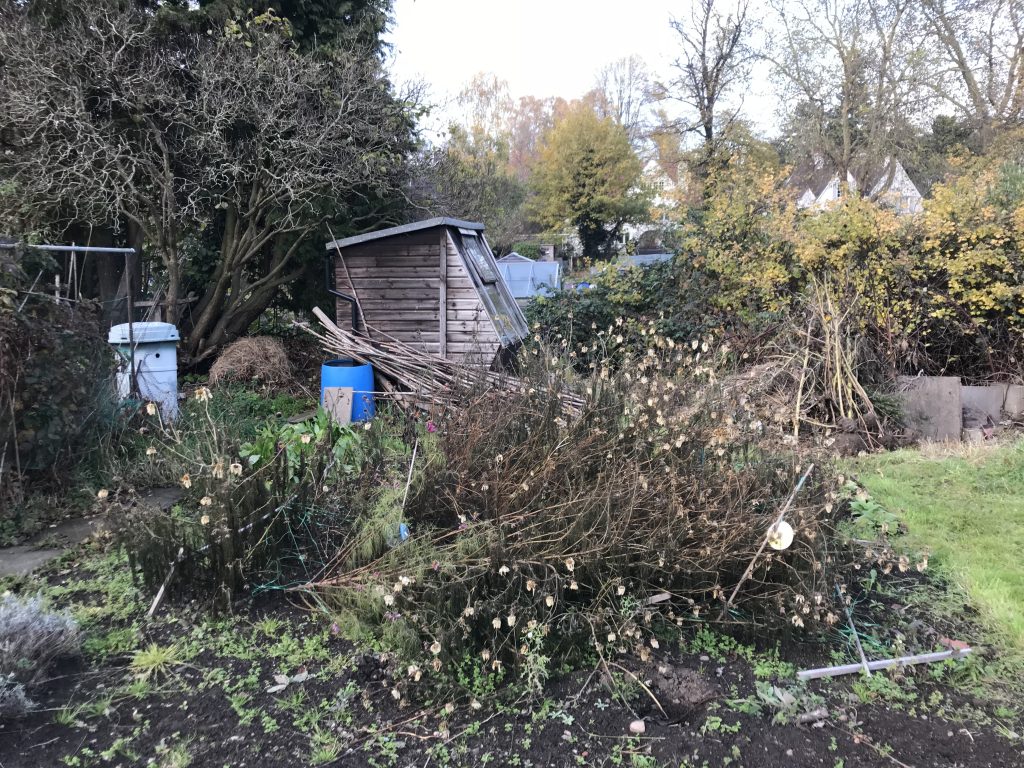 Cosmos have finally been zapped by the frosts

A week or so back I managed to take out the remaining plants from the one veg bed and get some black plastic down, to protect the soil from the worst of the winter weather and limit the weeds. Keeping the plastic in place is always a feat of “that’ll do” – pegs and staples are useless here, so I use any bits of heavy material I can find including, this year, the hopolisk, some discarded fencing and (my favourite) a marrow. 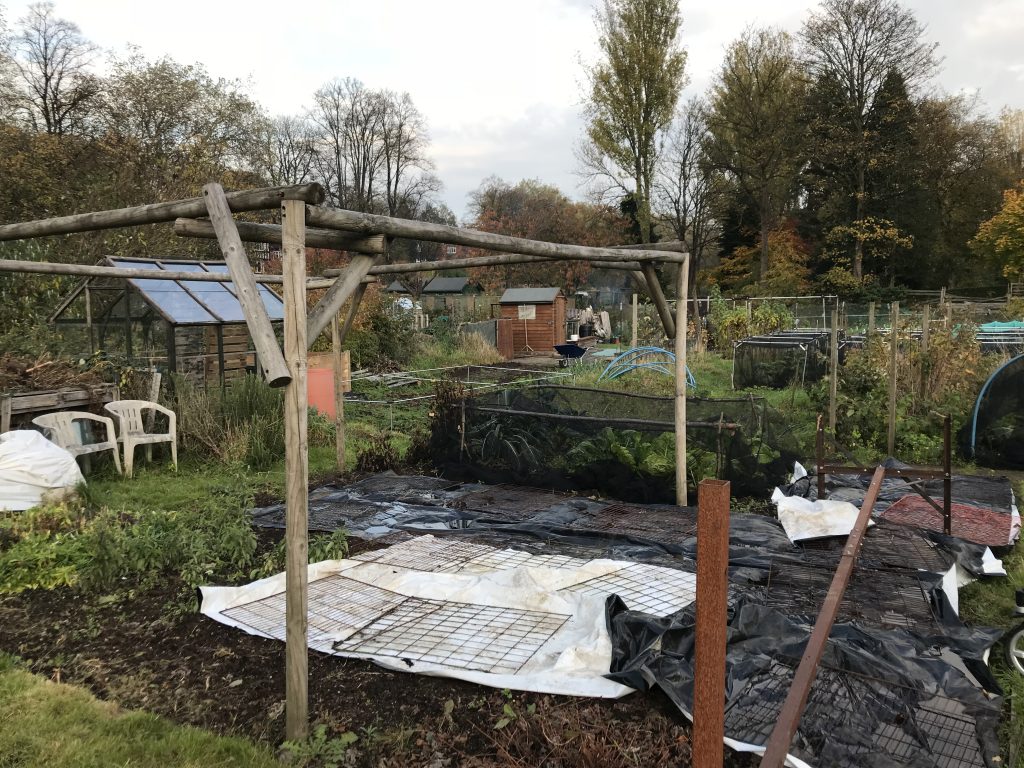 The one veg plot has been covered in plastic, though the brassicas are still going strong

Without really meaning to, I have become the proud owner of a gazillion dahlias – none of which are in the right place. The ones at home have now been dug up so that I can over-winter them indoors and replant in the spring. The allotment ones also need to come up (just need to find the time) and they will get the same treatment. 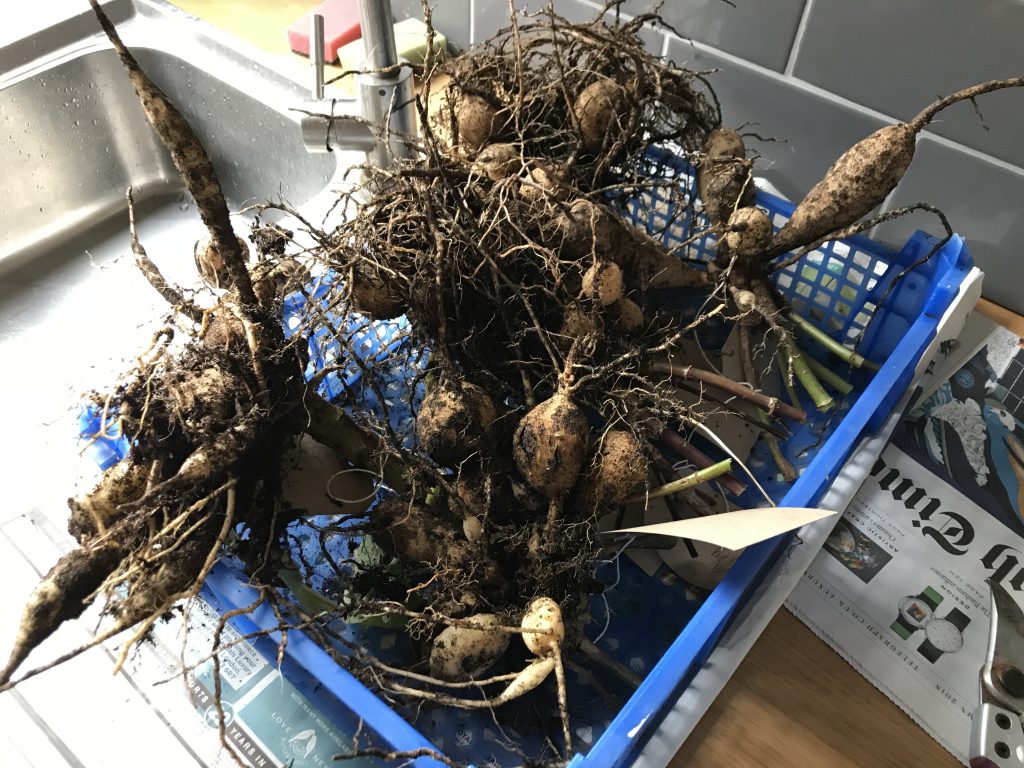 All this is diversion from what Harry and I spend most of our poorly time doing, which is cooking. Every morning I plonk him in the high chair so he can watch me concoct something – today it was a lentil and vegetable stew, which he later scoffed very happily, and yesterday it was a parsnip and cheddar soda bread. I know that he’s very young to be indoctrinated into Stallard cookery but I like to think that he will learn by osmosis.

One of his favourite treats of recent weeks has been an Irish Whiskey Cake that was leftover from the cake table at our wedding. He (and I) liked it so much that I pumped my friend Felicity for the recipe, which she in turn had to get from Mrs Audrey Flint from Smethwick Old Church. Audrey very kindly came up with the goods, and I discovered that my naive assumption that the whiskey would have been baked into the cake was wrong wrong wrong. It’s actually a tea bread, and the key ingredient is drizzled on after cooking to increase the moisture content…which means that my son has started his boozy life extremely young.

Here is Audrey’s fine typed-up version, which I see no reason to re-type as I can not improve on this excellent piece of food culture. Thank you Mrs Flint for carrying on the fine tradition of simple yet richly fruited, boozy loaves that keep forever. 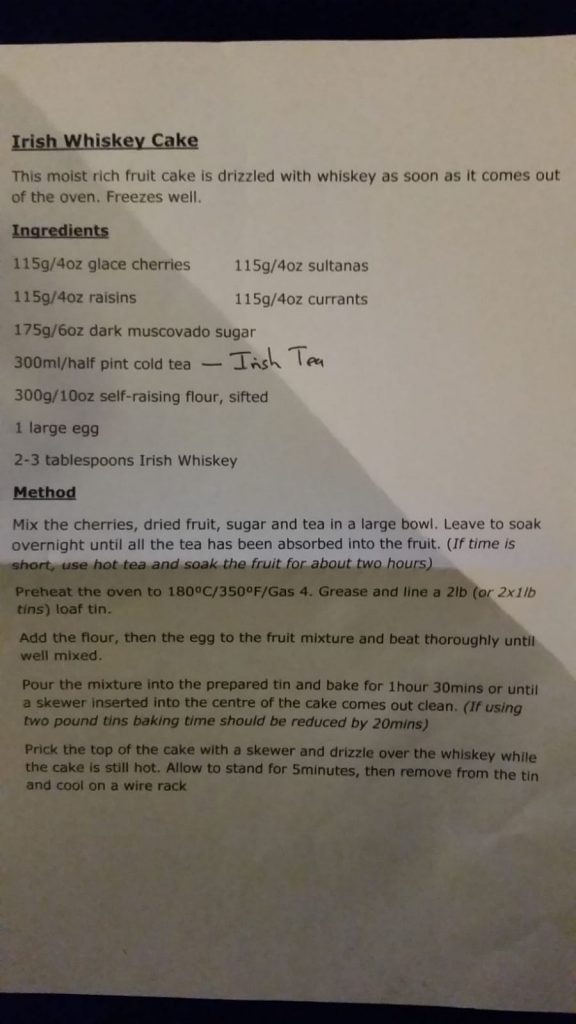 On the allotment: Covered one vegetable bed with plastic. All the cut flowers are now finished, but still harvesting chard, beet spinach and cavolo nero.