The Birmingham Mail tweeted this morning that the UK is colder than Siberia. Whilst I don’t know about that, I do know that it’s now sufficiently chilly for the heating to have flipped itself on this morning. Only one thing for it…the furry all-weather boots have come out. 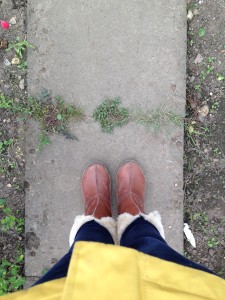 Nature is giving us a lot of mixed messages at the moment. I think she likes to play with our nerves. Look one way and it’s still summer, look another and there are all the signs of autumn. I’ve closed the greenhouse door for the first time since, when, June? After all their mollycoddling, I’m not letting the tomatoes get a chill and fail at the final hurdle. 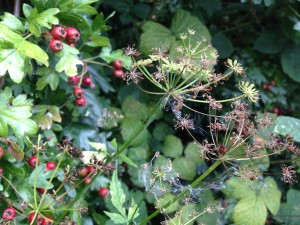 The chard and spinach I put in last week have already germinated, a row of tiny green spots under the fleece.

It seems that I am the only gardener in the whole place who is incapable of growing a marrow. Truly, I am trying. The courgette we’re growing is Romanesco, a type I’d read about in various cooking journals, most enthusiastically in Joan Gussow’s extraordinary book This Organic Life.

I first came across Gussow in Manhatten Food magazine. She’s a lecturer at Columbia University (well into her 80s I should add) who pretty much pioneered the organic food scene in the US. I don’t mean the fluffy-lifestyle cashmere-and-champagne-and-flicky-hair organics, I mean the proper academic debate that challenges the widespread use of petrochemicals in agribusiness. Gussow is one of my food heroes.

In her book she raves about Romanesco as being a no-fail courgette and she’s right, we’ve had some pretty good courgettes. But they don’t grow into marrows, not proper ones. I have left one on purposefully to try it out and it’s now long as an arm but refuses to get fat. Looks like the classic Mum-food dish of stuffed marrow might have to be put on the back-burner. 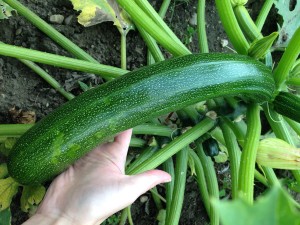 We’ve been picking raspberries since June, with no end in sight. Raspberries need sponge and cream (to my mind) and so I whipped up a batch of my go-to chocolate muffins. I’ve been using this recipe since the mid 1990s, taken from an Aussie Women’s Weekly cookbook found in Upton Upon Severn library. I then wrote it into a notebook I took to university (1998) and still use it now.

These are good muffins. MAKE THESE MUFFINS. 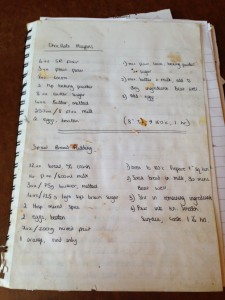 (It’s an old recipes so it’s in ounces. Just go with it)

Melt the butter in a measuring jug, then stir the milk in. If your milk is cold the butter may solidify a bit, but no matter.

In a large bowl, sift together the flours, cocoa, baking powder and sugar.

Stir in the milky butter (I just use a wooden spoon) and then beat in eggs one at a time. It will be a sloppy mixture.

Spoon into muffin cases and bake for about 20 minutes, or until done.

This also works really well as a large cake but you’ll need to up the baking time – about 45 minutes for an 8inch round cake. 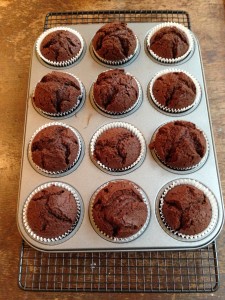 A tray of joy