It’s not quite Easter, but time nonetheless for a hot cross bun. But I’ve been lusting after a more childish teatime treat, the Belgian bun, where you get icing all over your fingers. So what if I combined the two? And just made a massive bun-loaf rather than fiddle around with individual ones? And so is born the hot not-cross bun loaf.

I adapted the basic hot cross bun recipe from the River Cottage Year, which is turn derived from Margaret Costa’s 1960 recipe.

Start by making a sponge or starter dough. Dried yeast is soaked in a mixture of hot water, cold milk and sugar until it froths and foams. 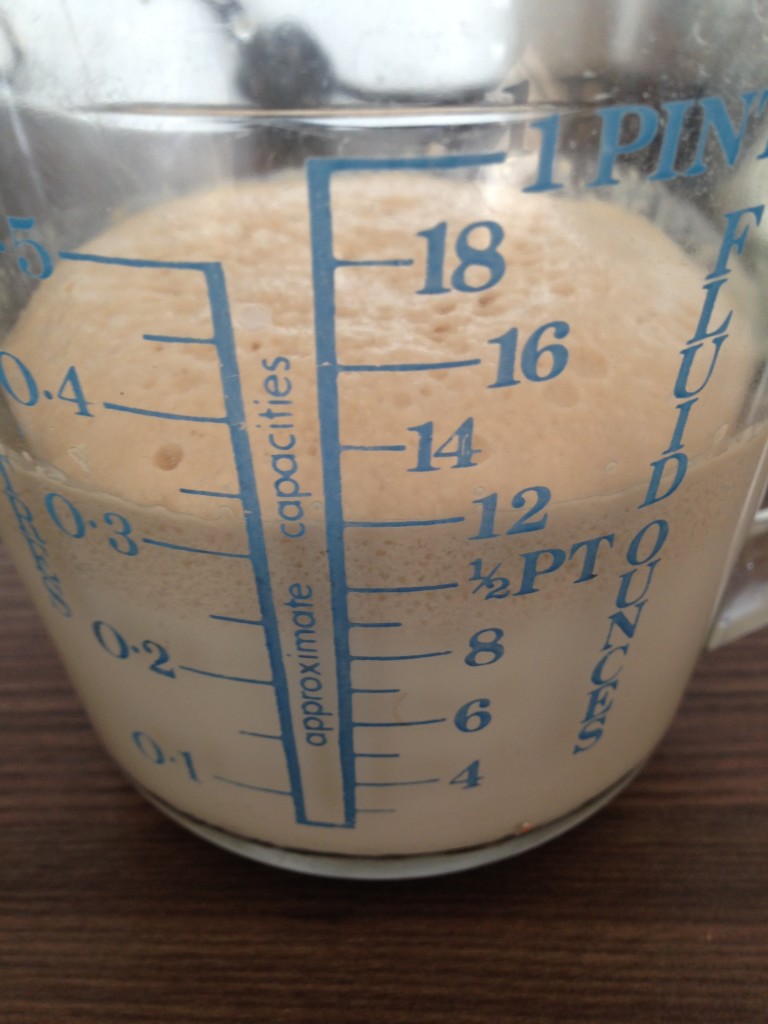 This is then mixed with plain (not strong) flour into a sloppy batter and left for 45 minutes to ferment. 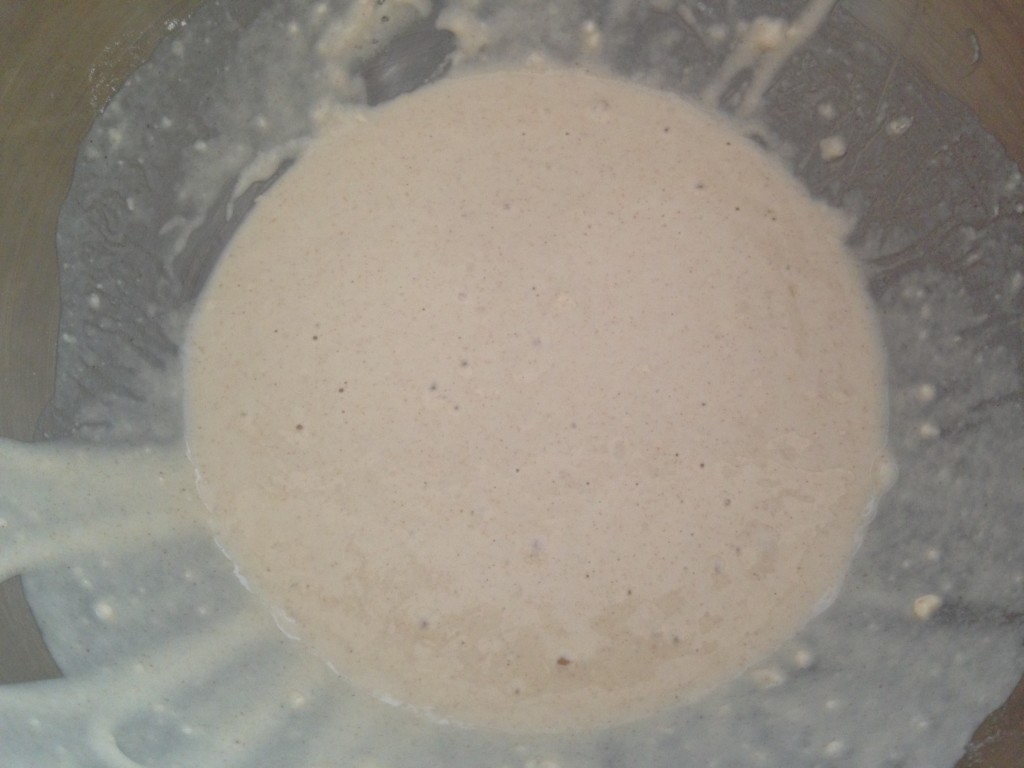 Beat the yeast mixture into plain flour and leave to ferment

The sponge will double in size and become full of honeycombed bubbles, like the kind you’d find in a crumpet. After 45 minutes it looked like this: 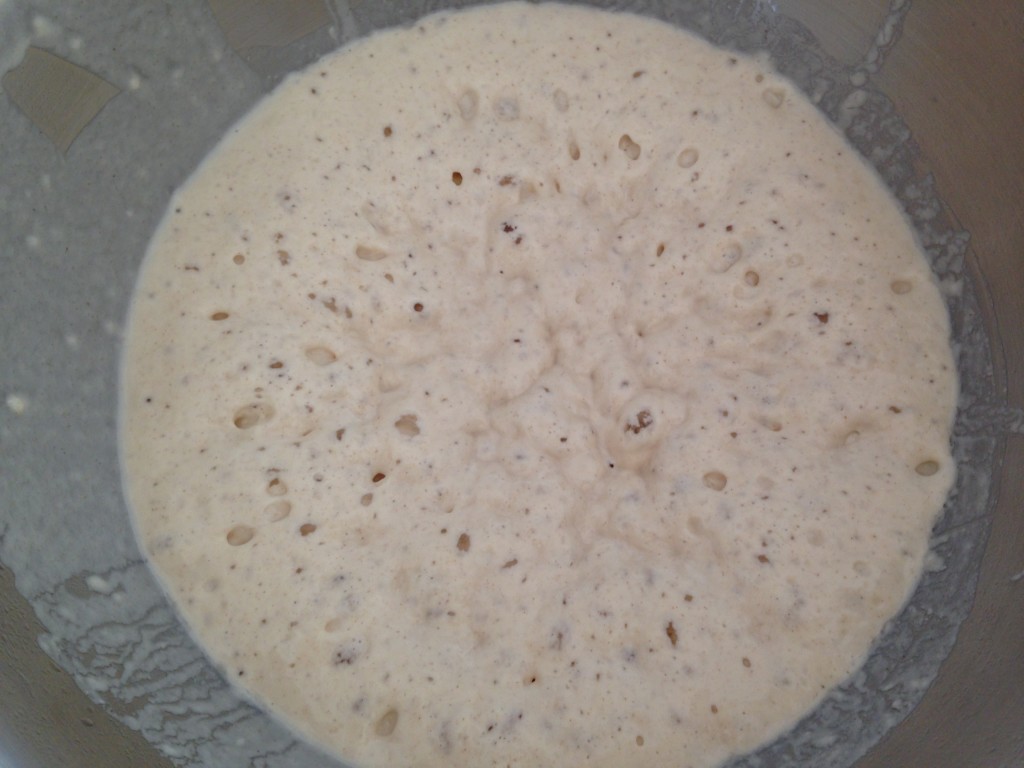 In the meantime, I soaked some dried fruit in hot water, with a teabag thrown in for flavour. This is a really old-fashioned technique, usually used to make tea-breads (hence the name). It makes cheap fruit nice and plump.

Next, the fermented sponge is topped up with more flour, the drained fruit, sugar, melted butter, egg and flavoured with mixed spice, cinnamon and orange zest.

It’s beaten together for a few minutes – the original recipe said that the dough would be ‘workable’, which I translate as ‘sloppy’. This is one to be worked in the bowl rather than the worktop – I used a wooden spoon. It’s made with plain flour, meaning there is no gluten, so I was just looking to bring it together well rather than achieve a spongy bread-type dough. 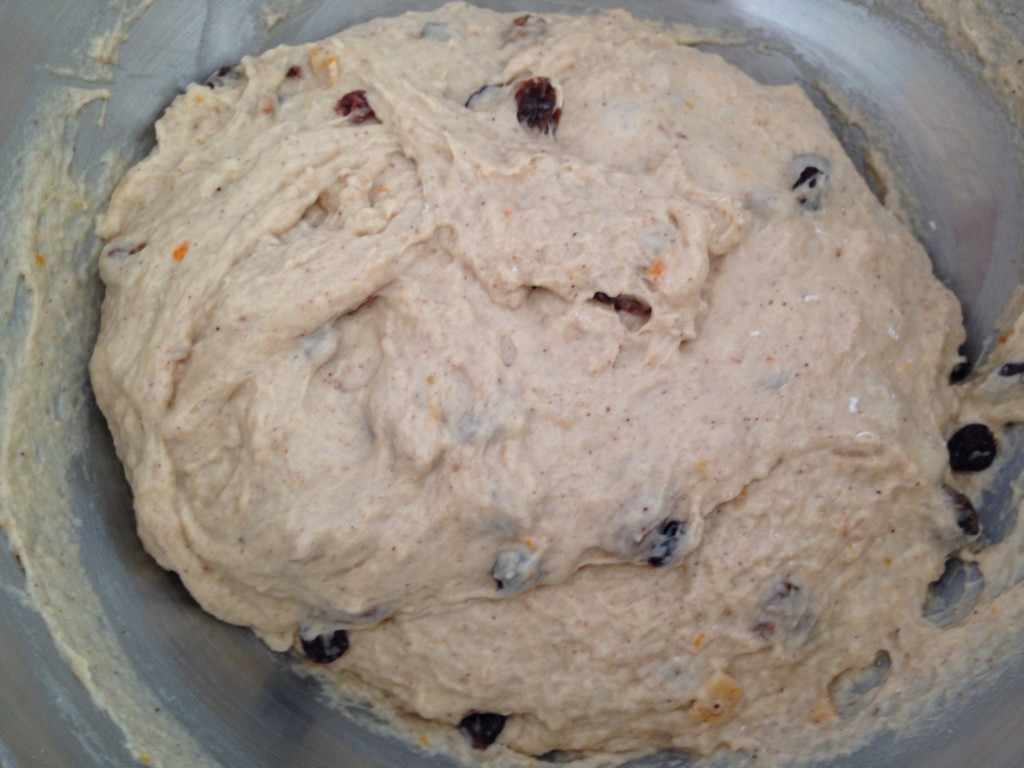 All mixed and ready to prove

It’s then left again for an hour to prove, where it easily doubled in size. At this point it can be shaped into buns but rather than do that, I simply roughly shaped the dough into a ball and then slopped it into a non-stick spring-form pan – slopped is the only word, this is a WET dough. Leave for another 15 minutes, then brush with beaten egg. 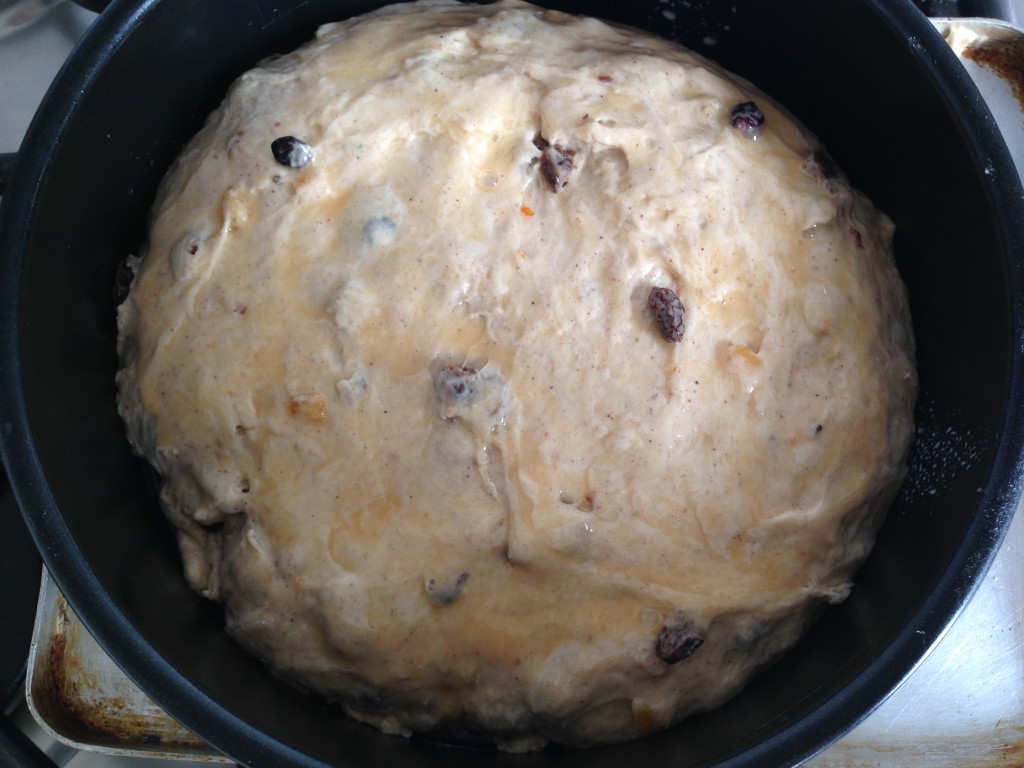 I baked the bun-loaf at 200c for 20 minutes, then glazed again with more egg and baked for a further 25 minutes at 180c. Once cooled, I drizzled the bun-loaf with a basic glace icing. This is LOTS easier than making crosses in a traditional hot-cross bun. 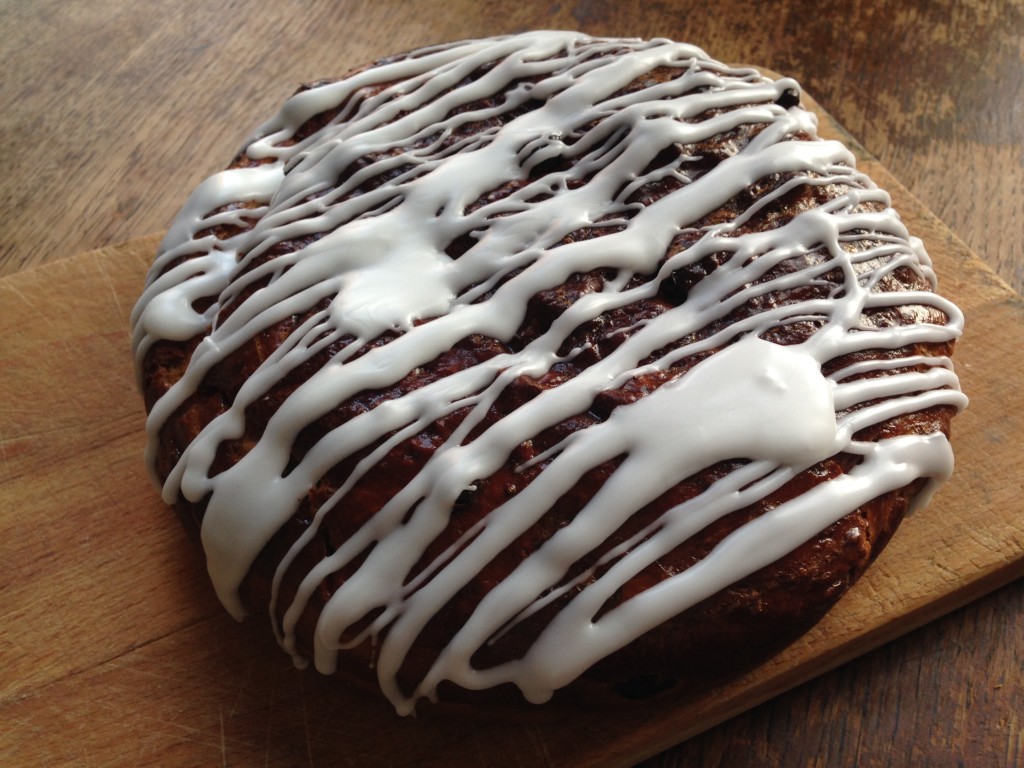 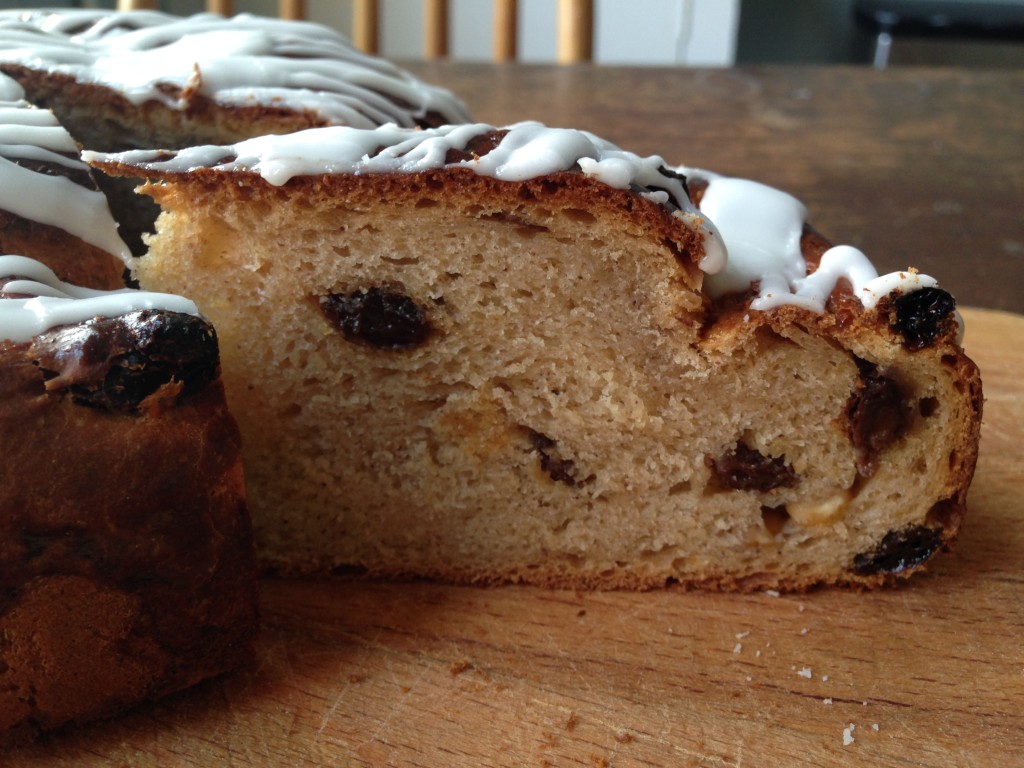 On the inside – fruity, cinnamon-y and sweet

The verdict: It’s lovely and fruity, with a good taste of cinnamon and orange. I’m intrigued by yeast-based recipes which use plain rather than strong flour: this one makes a light bun but still has a texture verging on cake – next time I might try and use half plain flour / half strong. There’s no residual taste of yeast, which is pleasing. A great option for teatime or breakfast.

Adapted from The River Cottage Year

125ml milk, cold from the fridge

Divide the flour into two separate bowls. Soak the yeast in the milk and water with a teaspoon of sugar. Leave until frothy and foaming. Mix yeast mixture into one of the bowls of flour, cover and leave to ferment for 45 minutes.

Meanwhile, soak the fruit in boiling water and a teabag. Add the sugar, spice, salt and zest to the remaining flour.

Once the starter is risen and clearly active, add the dry ingredients along with half the egg and the melted butter. Drain the fruit and add that in. Beat to a smooth dough – I used a wooden spoon. Cover and prove for an hour, until doubled in size.

Pre-heat oven to 200c and grease a spring-form tin. Shape the dough into a round and transfer to the tin. Prove for another 20 minutes, then glaze with remaining egg.

Bake for 15 minutes, glaze again, then bake at 180c until done – another 2o minutes. Leave to cool. Mix sugar with boiling water to make a thick glace icing. Drizzle on top of the bun loaf.