I’ve spent the afternoon doing maths. Food maths. The kind of maths you have to do when you own American cookbooks / read American food blogs, decide to give something a go, then realise that the measurements are all in cups and are therefore incomprehensible to English eyes.

It’s not that I can’t follow cup measurements, it’s that they don’t really mean anything to me. I can’t work out the ratios in my head to get a good enough grasp of how the recipe will work out. If I see a cake recipe for, say, 100g each of butter, sugar and flour, plus a couple of eggs, I know we’re working with Victoria Sponge-type mix. But a recipe that calls for 1 3/4 cups of flour, 2 cups of sugar, 3/4 cup cocoa plus buttermilk and oil? Means nothing. Cups measure by volume not weight, meaning that 1 cup of flour is a very different thing to 1 cup of, say, sugar.

(Matt would never have this issue btw. He can instantly work out the volume of something, picture its outcome AND foresee the problems. He is a human Google Sketchup. It’s a good life skill to have.)

So last night I was zoning out in front of Barefoot Contessa on the Food Network (the one and only reason that I own a TV) and she whisked up this chocolate cake. The invented reason was to celebrate her friends’ 20th anniversary of running their flower shop on the Hamptons. Nice. My reason is…just because. But it’s all in cups which is ALIEN so I measured everything individually in cups, then noted down the equivalent in grams, for easier future reference.

Is it any good? It’s tall, very moist, which you get with these cakes made with oil or melted butter, and the coffee gives it a bitter edge. Perhaps not as chocolatey as other recipes, but a good party cake. It does sink in the middle, but that can be covered up with icing – the original recipe includes a buttercream frosting, which isn’t my thing, so I’ve covered mine in a basic ganache. 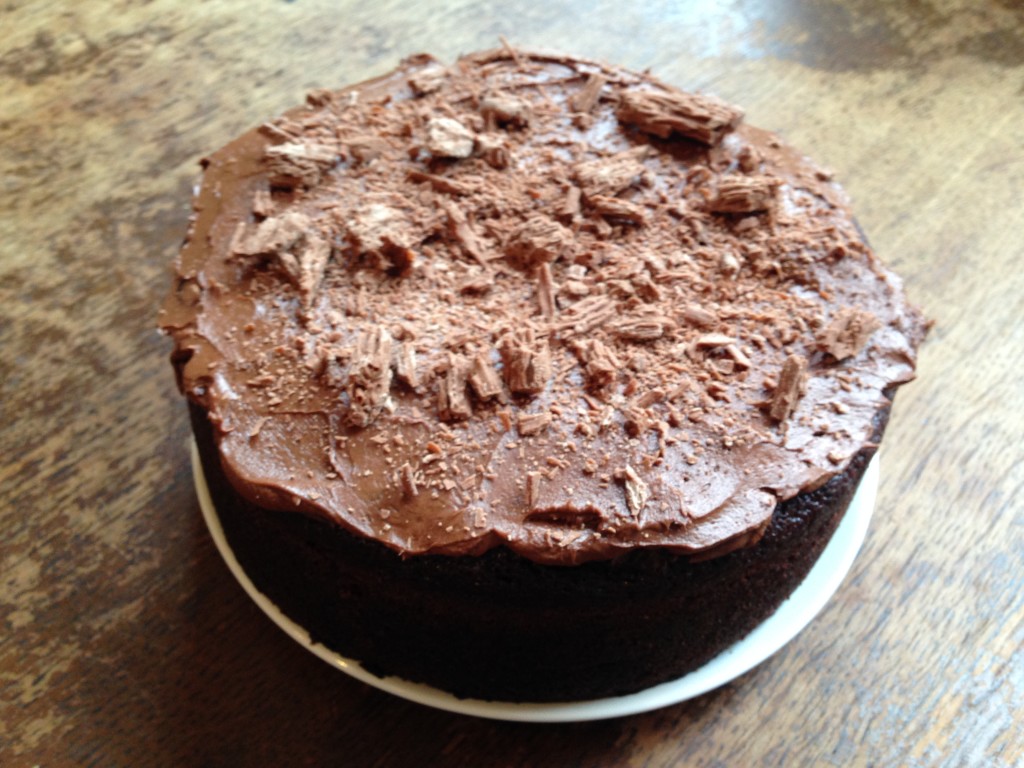 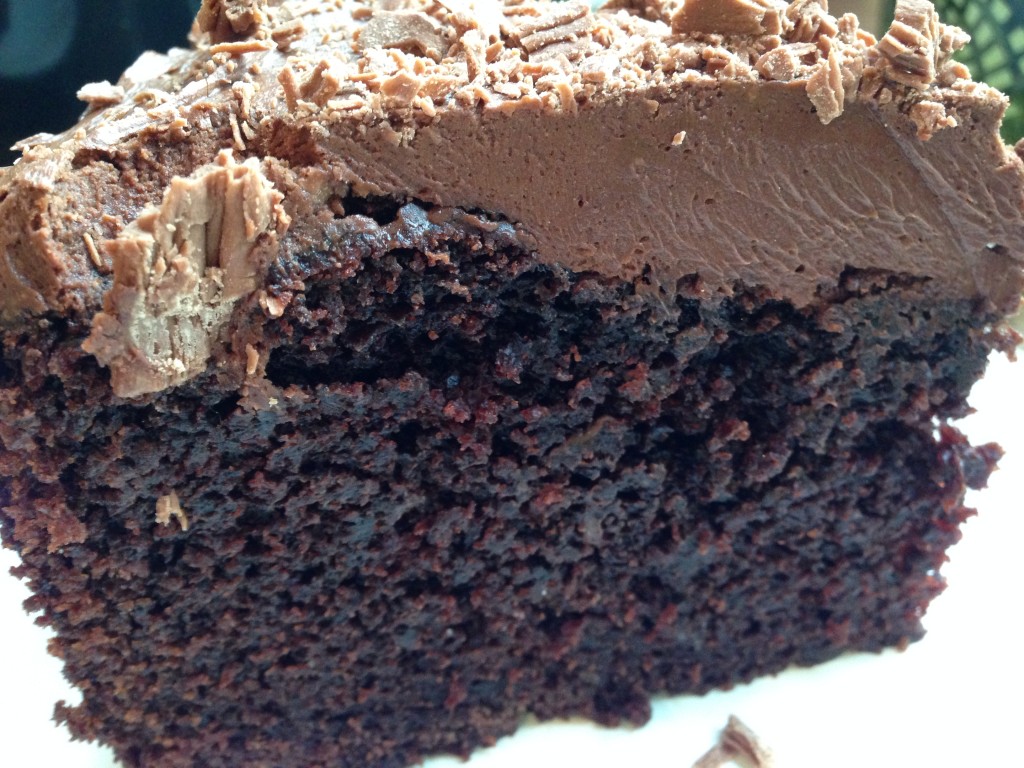 A word on cocoa: US recipes always stipulate between Natural or Dutch Processes cocoa and so I thought it about time that I looked up precisely what this means. Turns out that Dutch Process cocoa is treated with potassium carbonate solution, which reduces the cocoa’s naturally-high pH down to a neutral 7. Natural cocoa is not treated, so remains acidic. This then has an effect on the flavour of your dish (obviously) but also on how it responds to leaveners: bicarbonate of soda needs something acidic to get it going, whereas baking powder just needs heat. So if a recipe has cocoa AND bicarb, it presumes we’re using Natural cocoa – and if we use Dutch Process cocoa it won’t rise. The UK of course doesn’t differentiate between the two types of cocoa, and our recipes vary rarely use bicarbonate of soda alone. But at least now we know. Serious Eats have a lengthy discussion on the subject here.

75g cocoa (I use Bournville)

Preheat the oven to 175c and grease and line an 8inch round / 2inch tall pan.

Sift together all the dry ingredients. In a separate bowl, mix together the oil, buttermilk, eggs and vanilla. Using a whisk or a wooden spoon, mix the wet ingredients into the dry until combined. Stir in the coffee. This is a very wet mixture. Pour into the cake tin and bake for 1 hour, until a skewer inserted in the centre comes out clean. Cool. If preferred, ice with a chocolate buttercream or ganache.