There’s been a hiatus on Veg Patch whilst we’ve been gallavanting onboard the cruise ship Harmony of the Seas (you might have seen it on the telly). It turns out that cruise ships are actually just floating restaurants…the buffet was endless, the dining room offered up a four-course dinner every night and that’s before we even get onto the complimentary room service.

However, what goes around comes around: whilst we were enjoying the daily diet of waffles, steak and gateaux, back on the allotment the slugs and snails have been having a feast of their own. Many of my seedlings have been nobbled – this sunflower had its stem nearly bitten clean through, a similar fate befell the dahlia, and one of the borlotti beans has been nibbled to the ground. 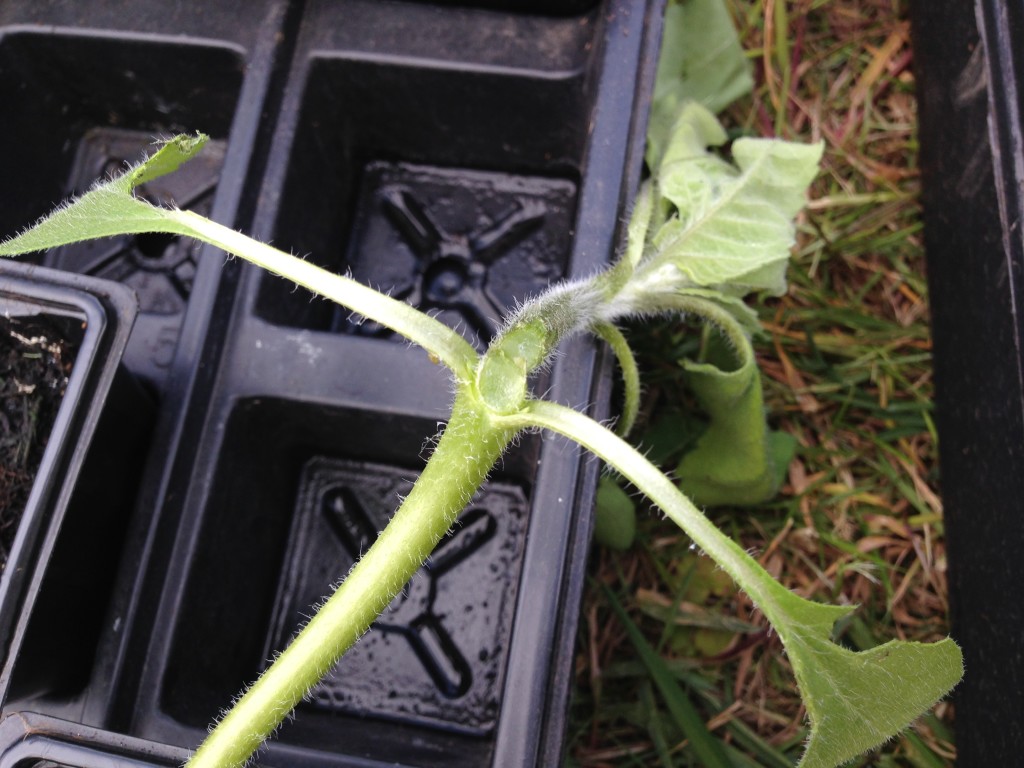 This was a healthy plant until the slugs got to it 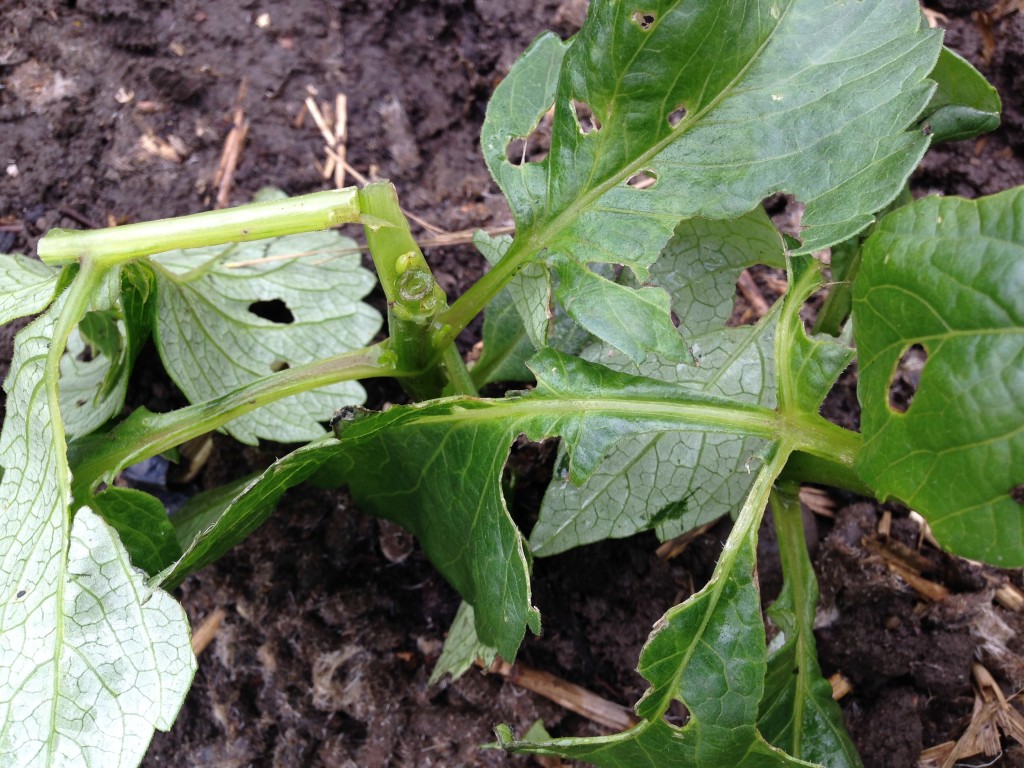 The dahlia’s stem has been chewed through 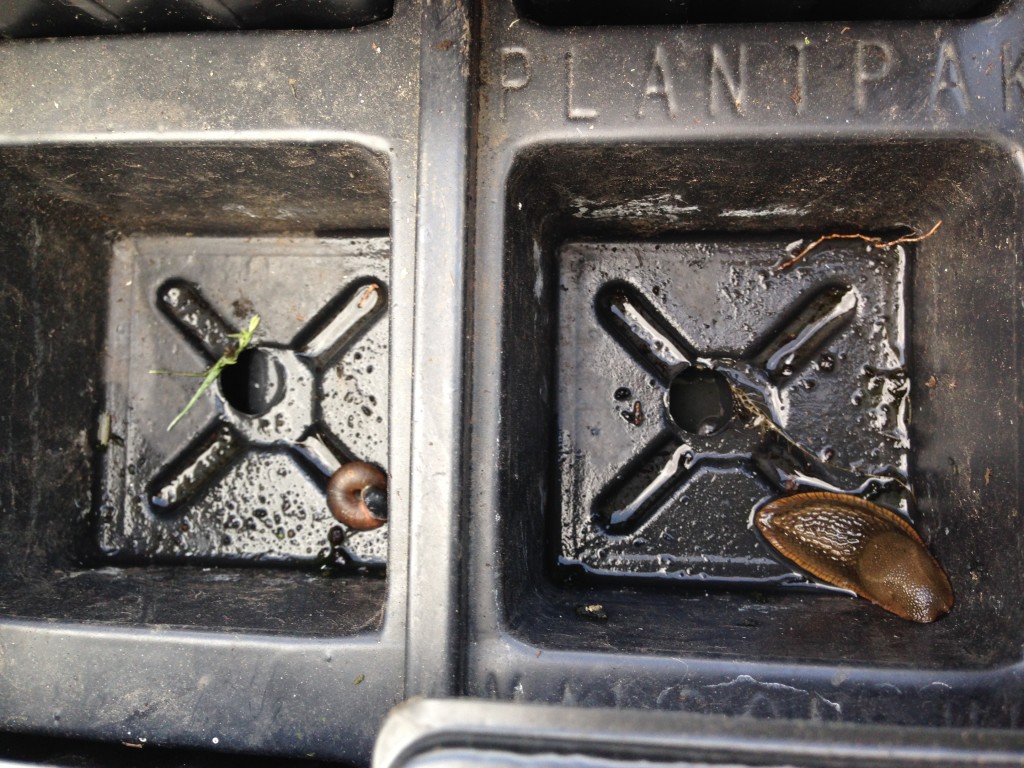 The culprits. I think my pots are nurseries for slugs: for every large one there are about three tiny ones

Thankfully, this onslaught has come when most of the plants are large enough to withstand it, so they may pull through. Today I’ve put down a massive amount of Slug-gone wool pellets and, in a belt-and-braces approach, have hired my friend’s 8-year-old son to come slug-hunting during half-term. He will be paid 10p for every slug, snail or caterpillar he finds: money very, very well spent.

With the slugs dealt with, today brought another pressing job: the planting out of the sunflowers. Of the 25 or so that I sowed only 16 have made it through (some didn’t come up; others got scoffed by sluggy). The four Sunflower Club seeds have grown well, and given that they are meant to be TALL, they need proper staking. Canes are feeble and aren’t the prettiest, so I picked up 20 hazel poles for the princely sum of £9 from the allotment shop: just the thing. 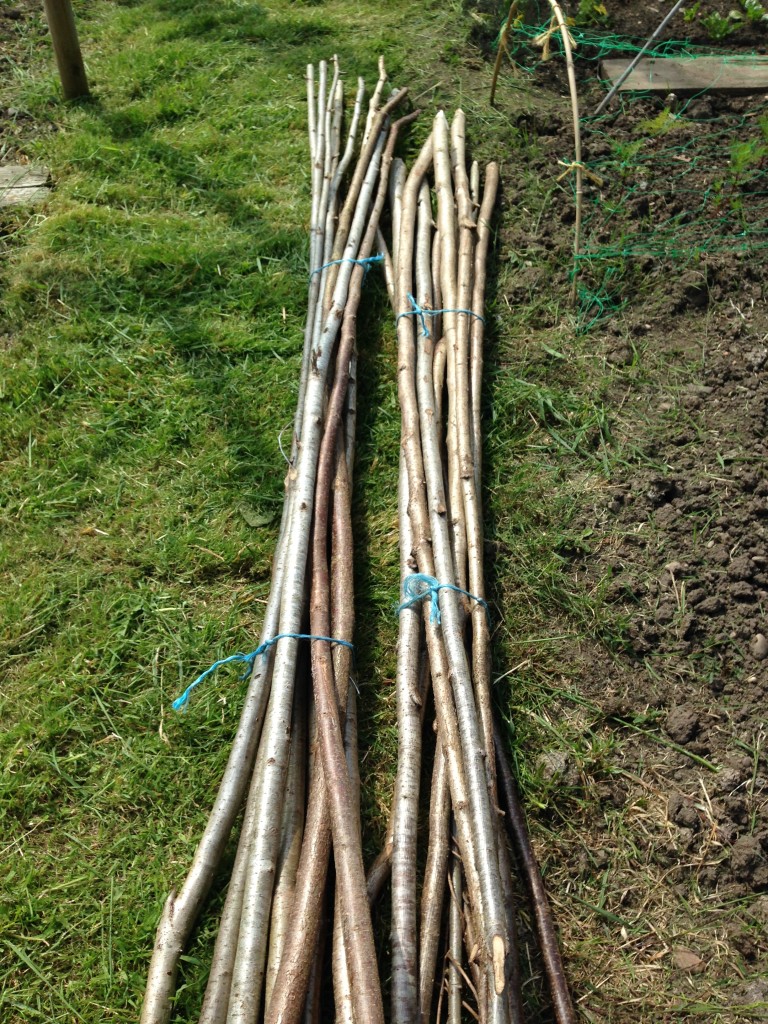 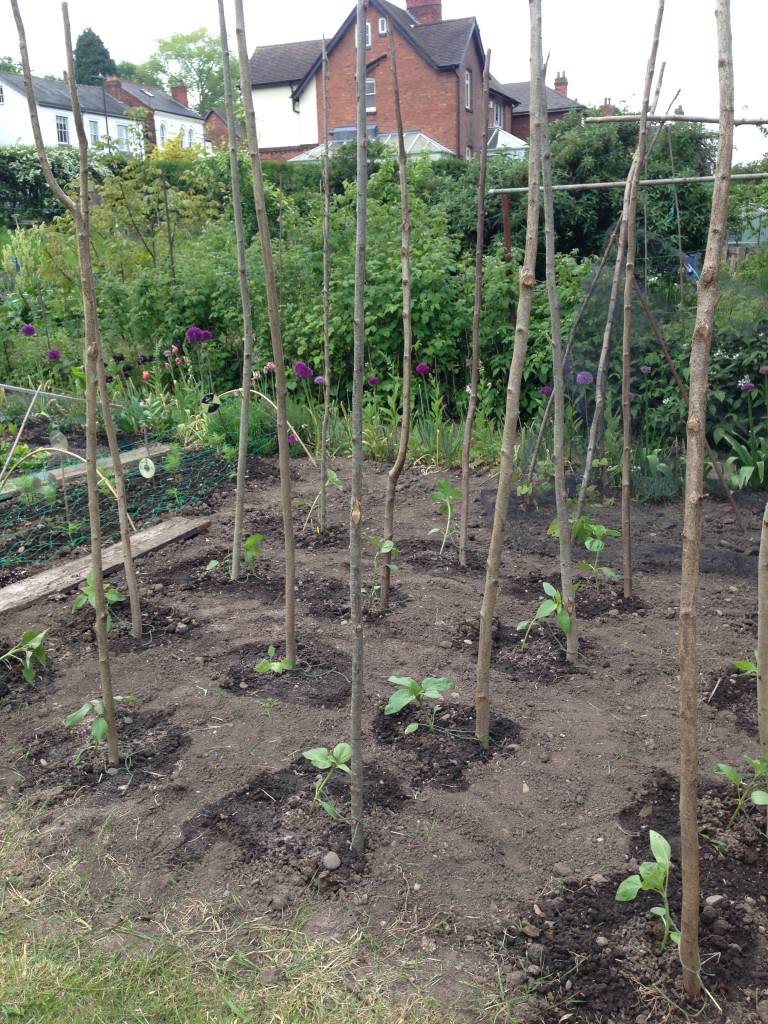 Sunflowers planted, mulched with wool pellets and tied to stakes

The grid of 16 sunflowers against their hazel supports looks a little, well, witch-y. I LOVE THIS. If Matt can have his hopolisk May Pole, then I can grow myself a coven of sunflowers. Speaking of which – the hops are still shooting up the hopolisk, all bar one, which has simply refused to grow. 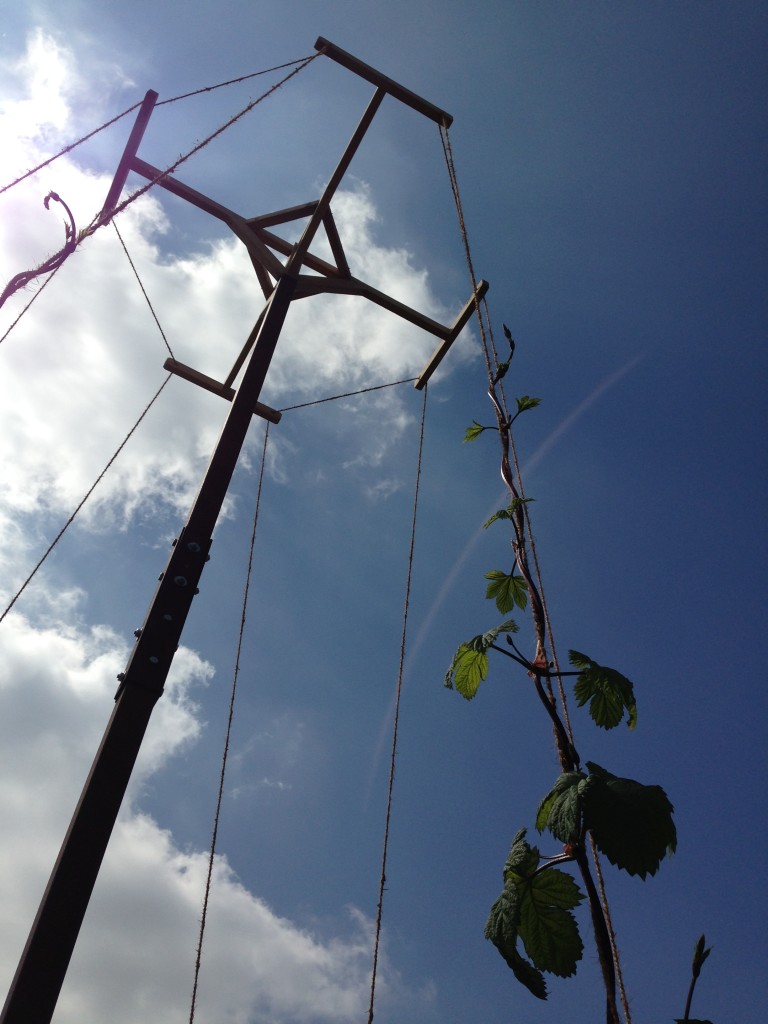 Hops are soaring up the hopolisk

Spring is on the cusp of becoming summer. The grass on the allotments is growing like the clappers – as are the weeds – and the plants are establishing themselves in the warmer weather. We have green fruit on the strawberries, and the gooseberries, redcurrants and blackcurrants are studded with tiny green sour-bombs.  I have a few sweetpeas in bloom, their scent pungent and delicious. The tulips have finished now and the alliums are stealing the glory with their bright, purple pompom flowers. Next week the foxgloves and pinks will bloom and then, hopefully, it will be the turn of the cosmos and calendula. 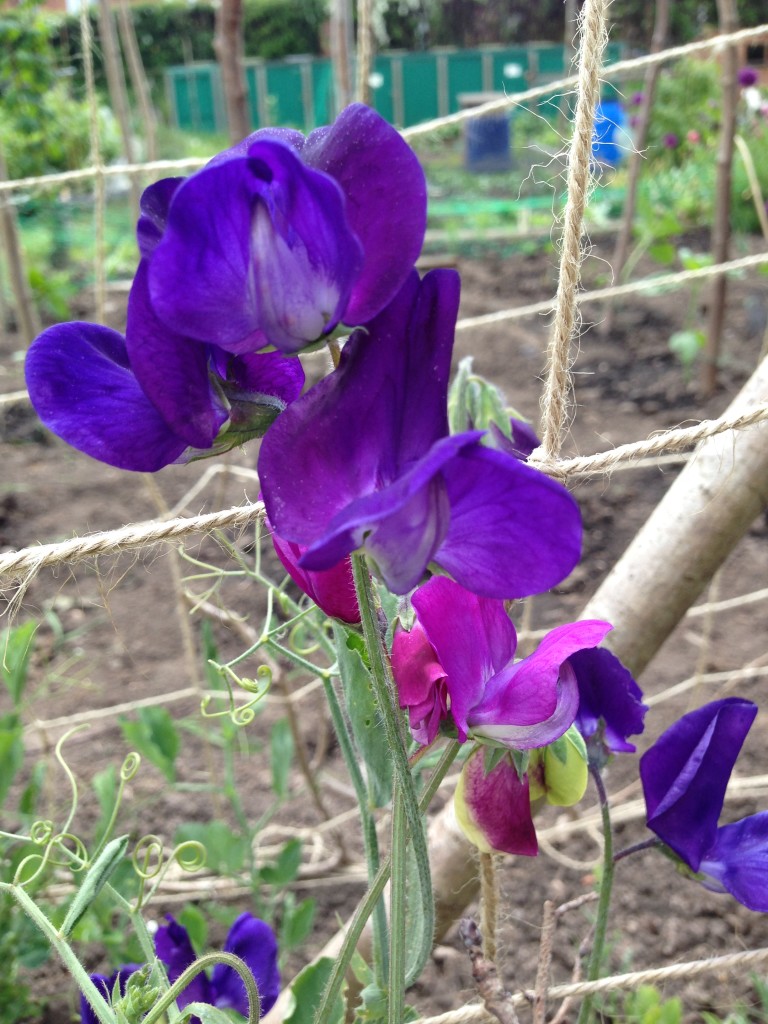 First sweetpeas are in bloom 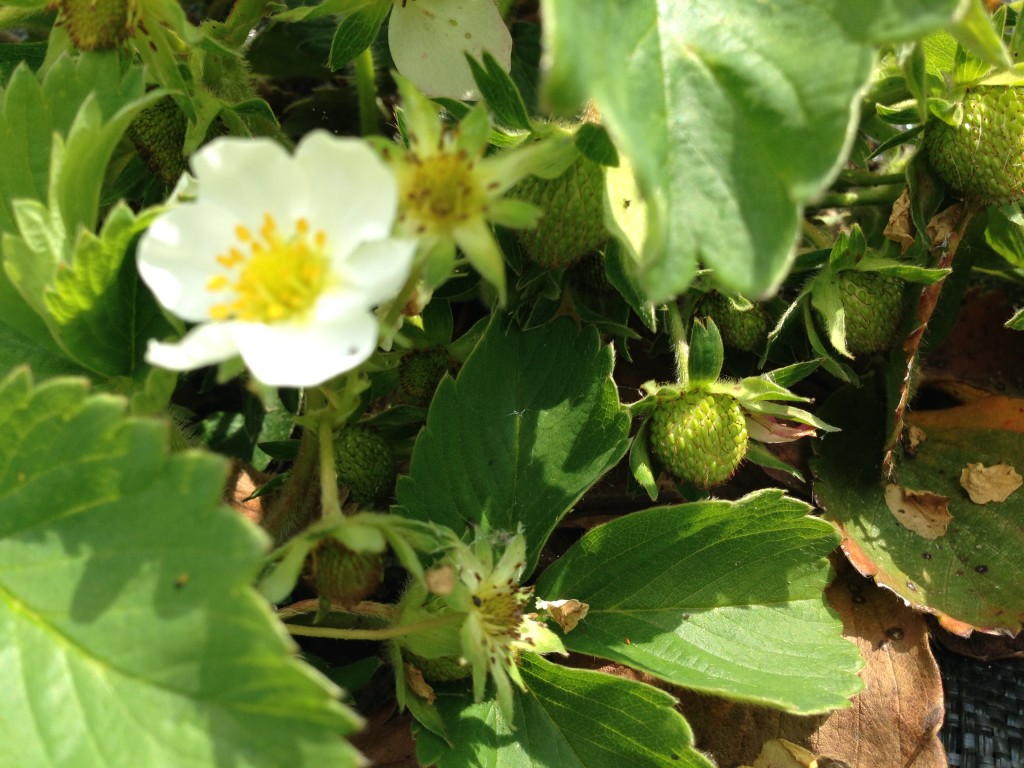 Strawberries are setting their fruit 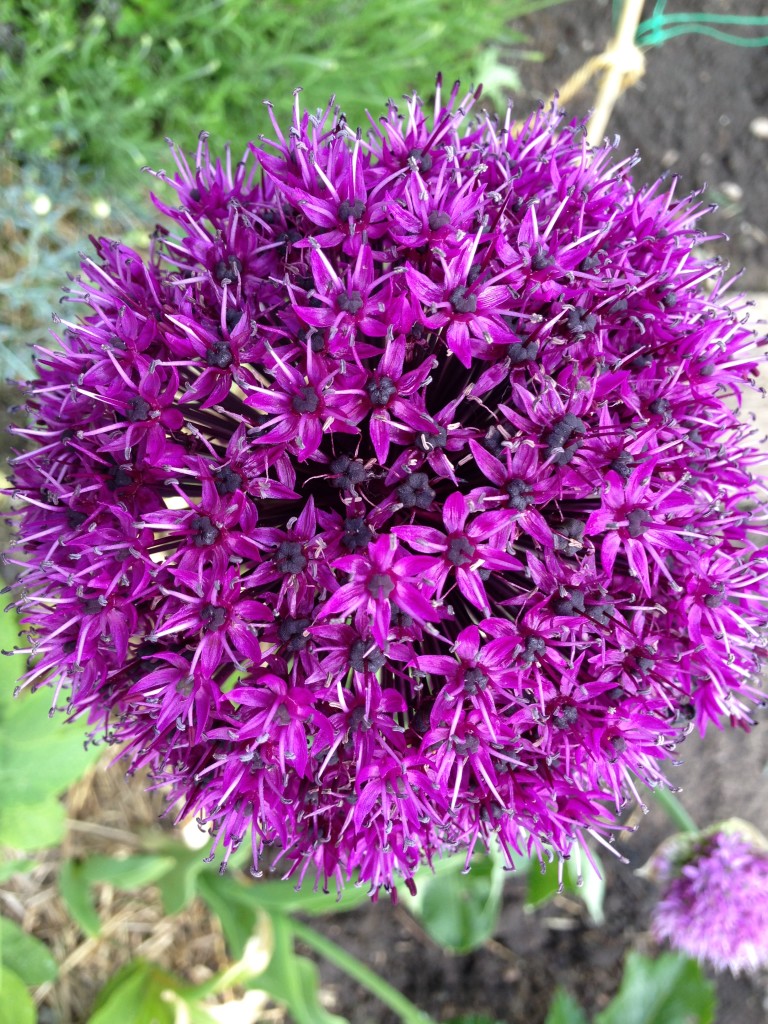 The row of alliums is vibrant

Planted out: Sunflowers, squash, cosmos ‘purity’, dahlia
Direct sowed: Beets, carrots, parsnip, bells of Ireland, savory, parsley, cima di rapa (Note: None of the things I sowed back in March and April made it through; too cold)
Also: Potted on zinnia. Wool pellets on everything. Thinned out the frills of hex. Good watering – soil is dry and still a little cold, despite the warmer weather.