At various points through the year I wonder what the point is of having an allotment. It is another call on my time, and because my child-free hours are now taken up almost entirely by work, I simply don’t get the opportunity to care for it as well as I’d like to. People talk about ‘mummy guilt’ – the idea that women feel they should be at home rather than earning money / having a life – and I have no truck with that at all. But ‘allotment guilt’….well, that I am familiar with. See also ‘allotment resentment’ (the sentiment of “oh bugger I really ought to weed the sunflowers but I just want to have a bath”), and ‘allotment self-doubt’ (the sentiment of “why do I even try, when I’m not even that good?”). Why bother, when my efforts will never result in the outcome that I want, such as these gardens that I saw at the weekend? 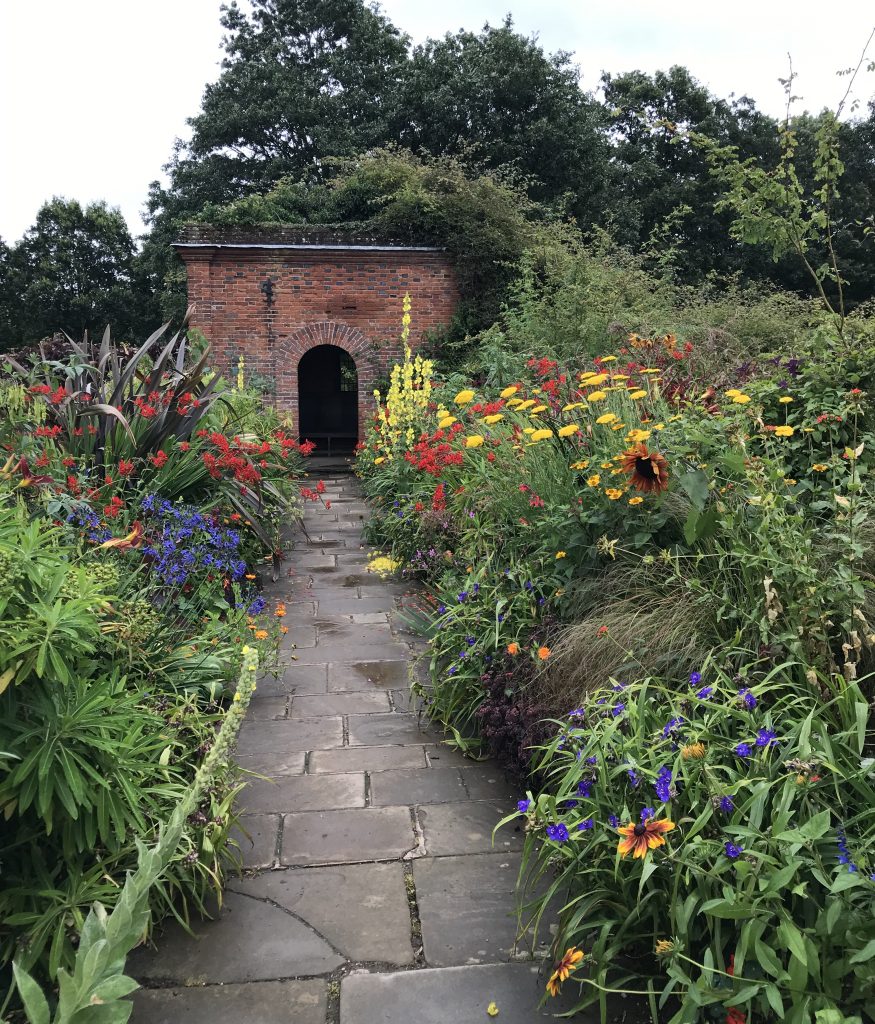 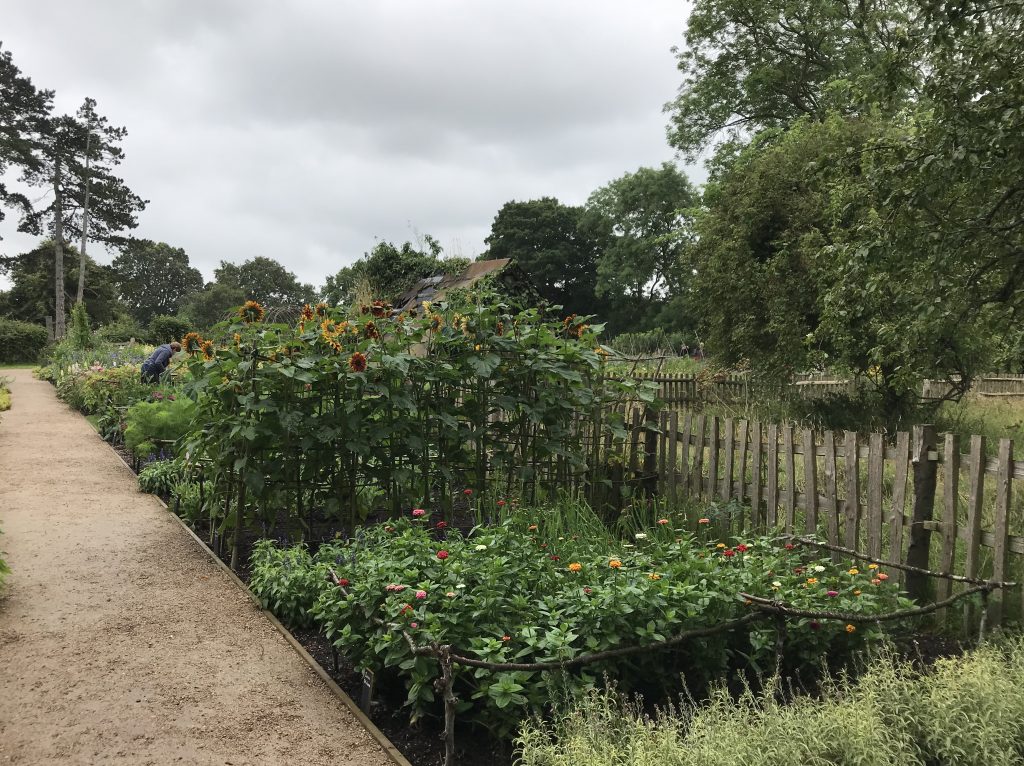 And as I take a rushed thirty minutes to weed those sunflowers, and ponder the question of ‘why do I bother’, I find myself coming to the conclusion that tidiness, finish, lack-of-weeds etc, do not actually matter. That the point of a kitchen garden, an allotment, a cutting garden, is productivity. If there’s a crop, then it’s all fine. And I also notice that the areas that have given way to weeds, to grasses, to brambles and to self-seeded friendlies such as the massive patch of oregano by the greenhouse, are now feeding a massive ecosystem of bees, insects and birds. So, far from being a scourge, the chaos is actually a source for good.

This insight may lead to a whole new approach to allotmenting:  planting, or tending, for productivity and insects alone, rather than some concocted notion of what is pretty and proper. To whit, the rocket that bolted several weeks ago is still in the ground, providing nectar and pollen to those who need it. The self-seeded poppies I’ve left alone, for the same reason. And the groundsel and other unidentified green things that are rampant on the cutting patch….well, if they’re not doing any harm to the flowers, but they are providing a home and food for a critter, maybe they should just stay put. 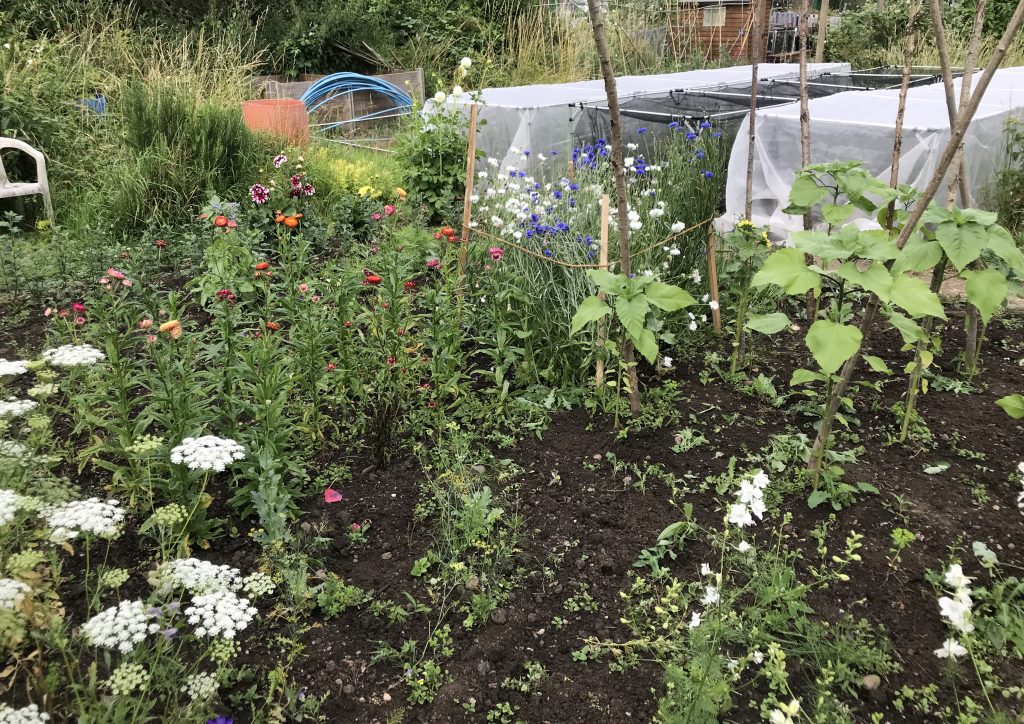 My cutting patch is a bit more….loose around the edges 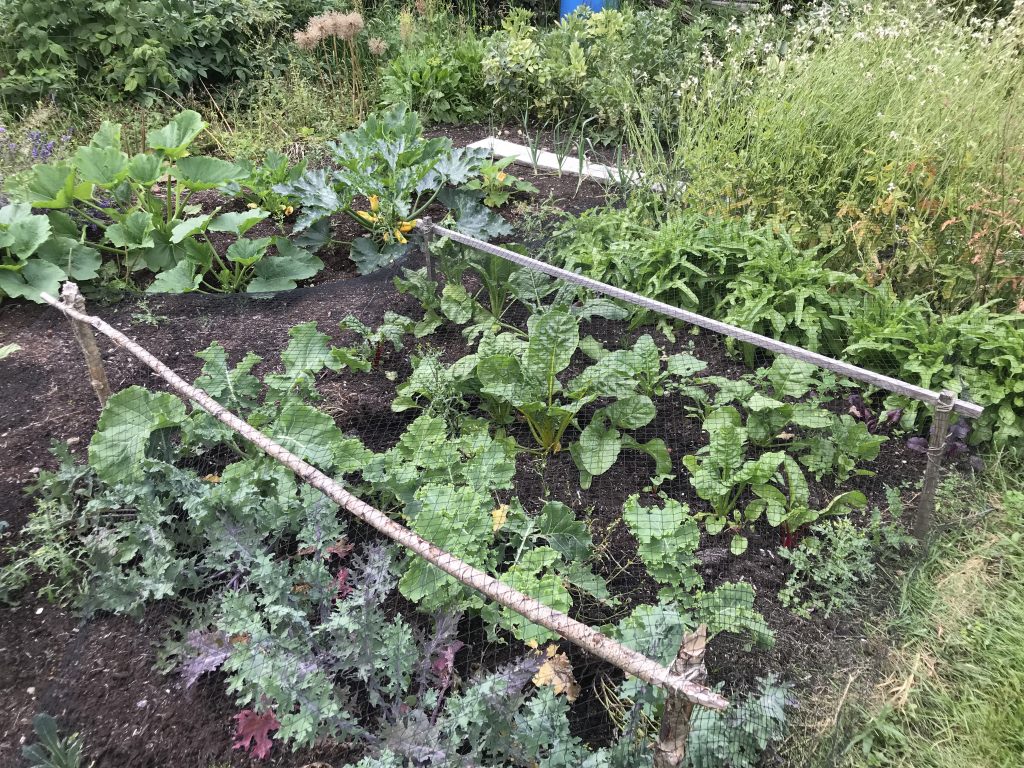 Letting the rocket set seed amidst the kale and lettuce

This is not to say that I want to let nature do entirely her own thing. I’m not happy with the grasses that have encompassed the strawberry patch, and the greenhouse is an ongoing concern. But I am reminded of the yogic idea of ‘santosha’, which roughly translates as contentment. It means do your best, do what you can, but find contentment in whatever result comes your way. Letting go of our ideas of what things should be like, ought to be like, but finding the good in just what is. It’s an incredibly freeing notion. I love it when the allotment has lessons for living like this. 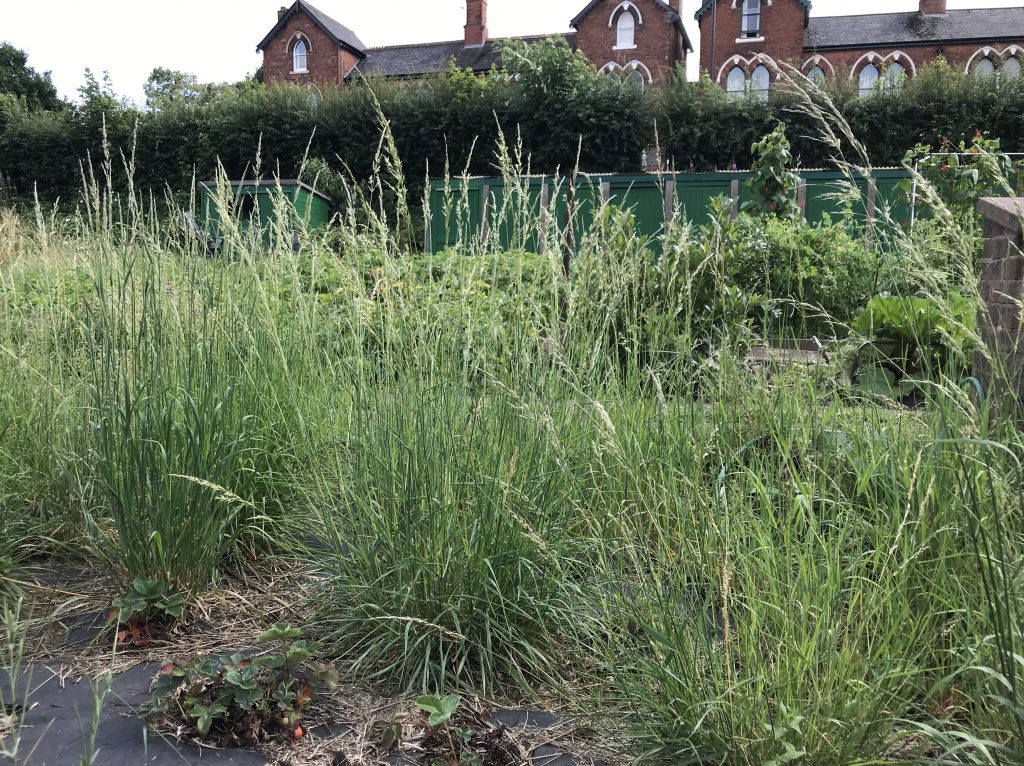 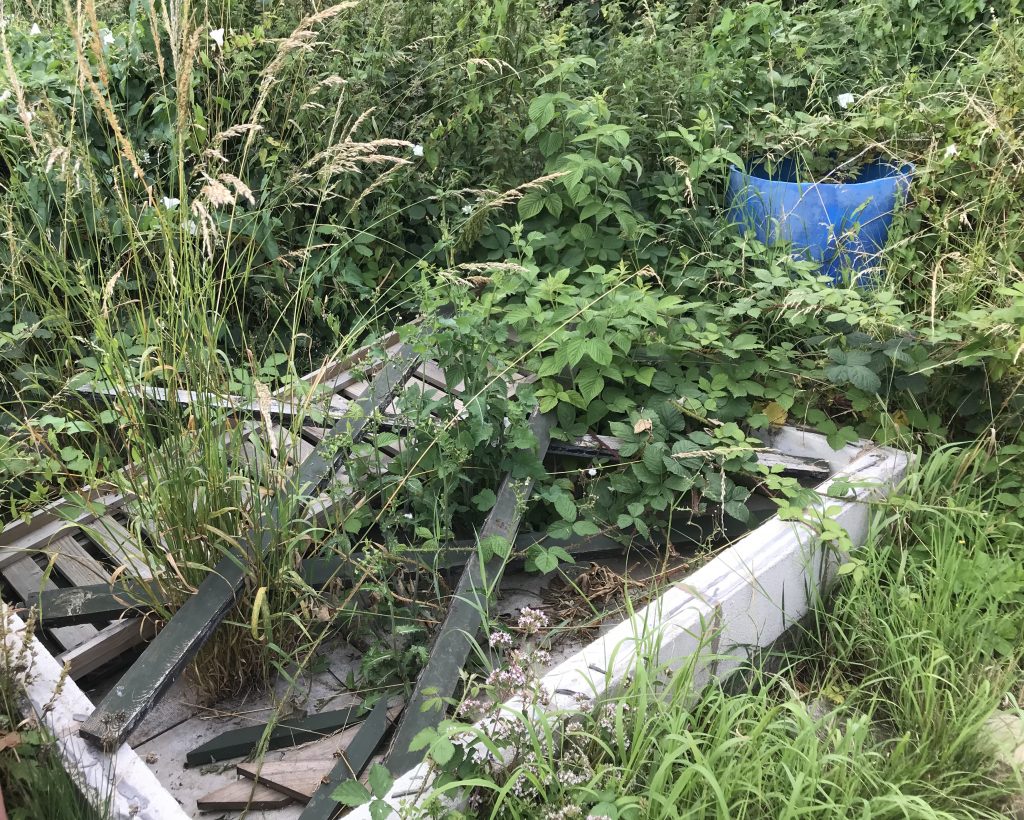 The greenhouse has been taken back by nature – more specifically, by self-seeded marjoram and brambles 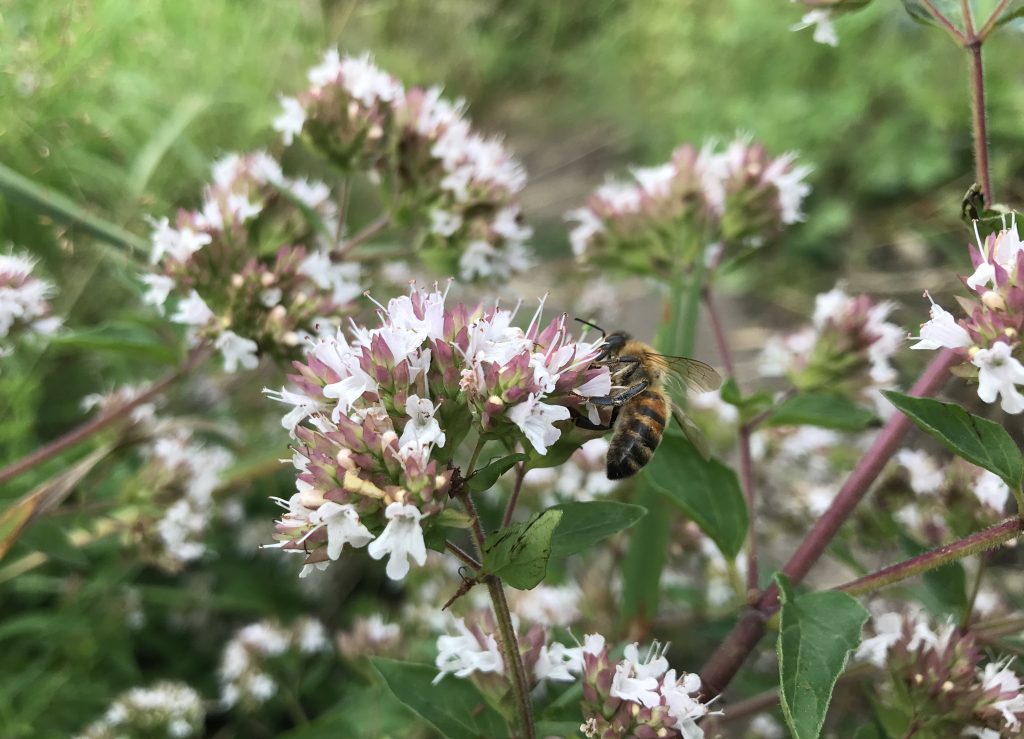 But this is what happens when you let nature run its course: food for bees

So in the spirit of doing only what I can do: the cornflowers have become top-heavy now so I’ve attempted to stake them up with stakes and hop twine. In another life they would be beautifully trained using hazel poles…but as long as the stems stay up-right, and I get a crop, then ‘good enough’ is OK. 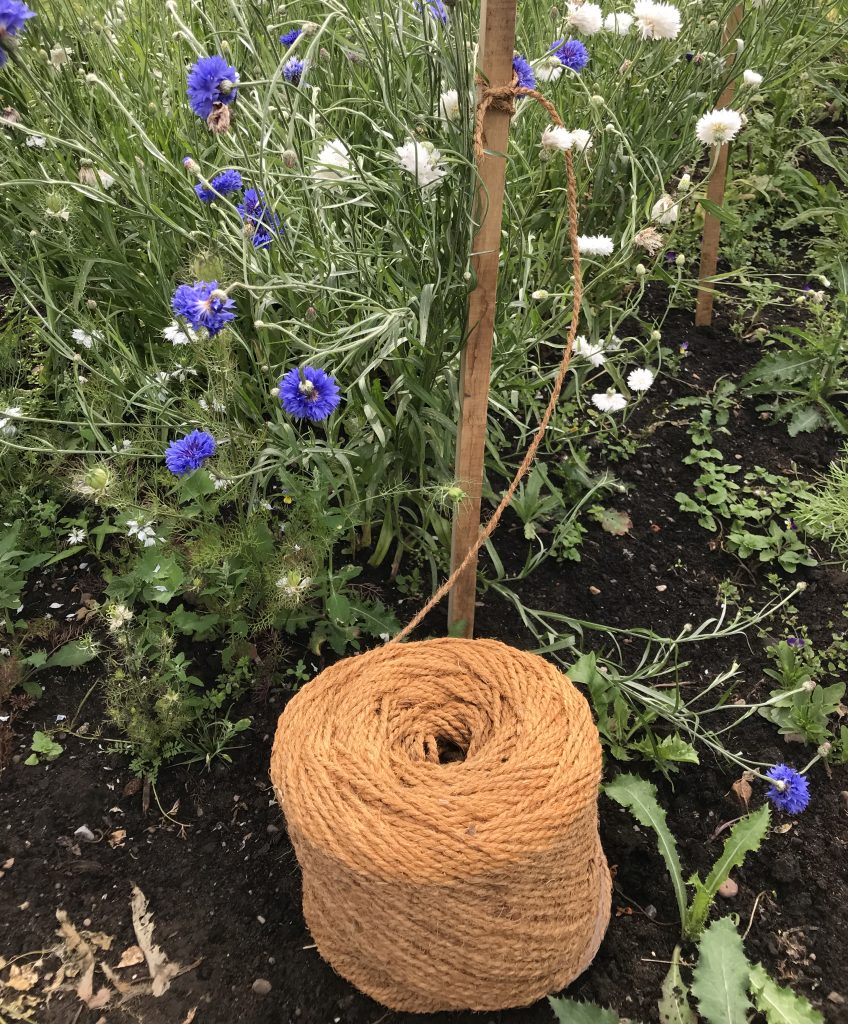 And the crops are lovely. Weekly bunches of ammi and cornflower are now joined by the first dahlias and chrysanthemums. The beans are late this year due to the pigeon and slug damage, but we do have early kale and chard, the first courgettes and a wonderful supply of fat blueberries. I’m also feeding bees and pollinators with my efforts. For two self-employed working parents of a 22 month old, in the middle of the city, that’s not bad going. 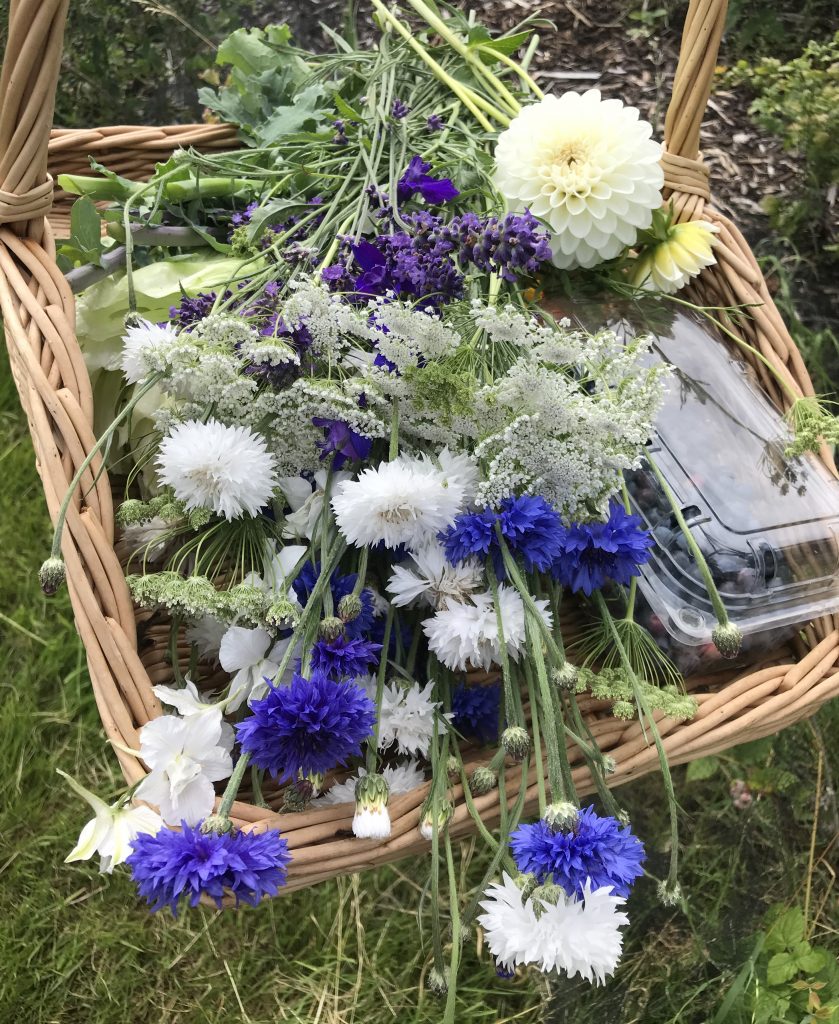 The patch is still productive. So does a little chaos really matter?

Also: Despairing over British politics, a PM voted in by a tiny number of rich people living in the Home Counties, Brexit and the pointlessness/horror of it all. Distraction comes by watching the Tour de France, visiting Baddesley Clinton and Packwood House, and meeting Abi and Sam’s delightful new baby Edie. That, and work work work.