Yesterday was a rainy dull day, albeit warm, a day made for kitchen pottering. I’ve been making a variation of this recipe for years: in essence, lamb marinated with garlic, cumin and chilli, roasted or barbecued, then served up with a tomato-aubergine salad-relish-type thing.

First, make up the marinade. I pounded two cloves of garlic with a heaped teaspoon of cumin, the same of dried chilli flakes and a scant teaspoon of ras-al-hanout. You could use more but the memories of messing up that anniversary tagine are still etched in the memory. Bash it all together with olive oil to make a paste. 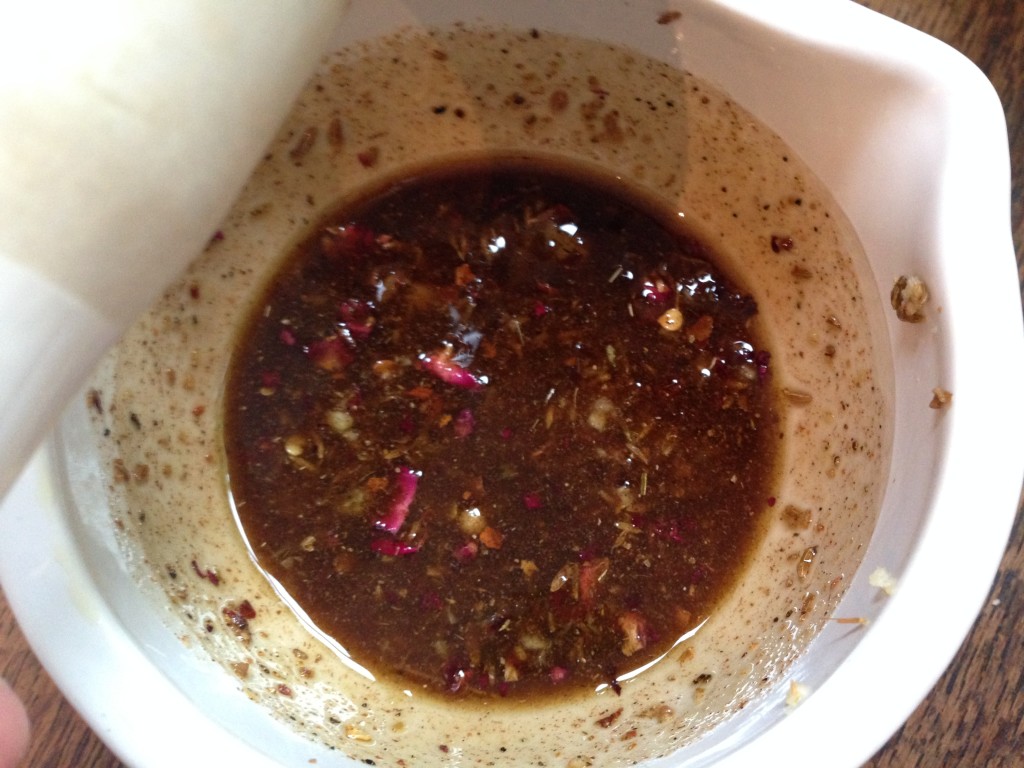 Next, prep the lamb. I used a half leg of lamb which I boned and butterflied, but most lamb cuts will work…shoulder, chops. Actually, you could use chicken or, thinking about it, pheasant or partridge might work too. 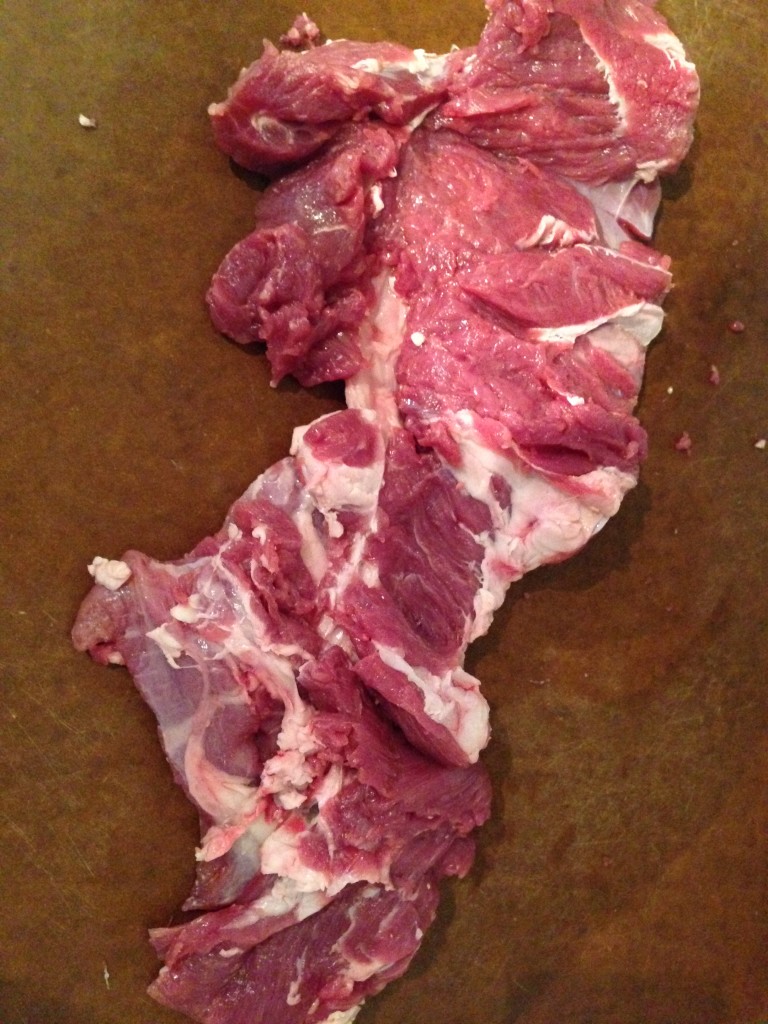 Simply rub the marinade into the meat, cover and leave for a few hours to let all the flavours mingle. No salt at this stage. 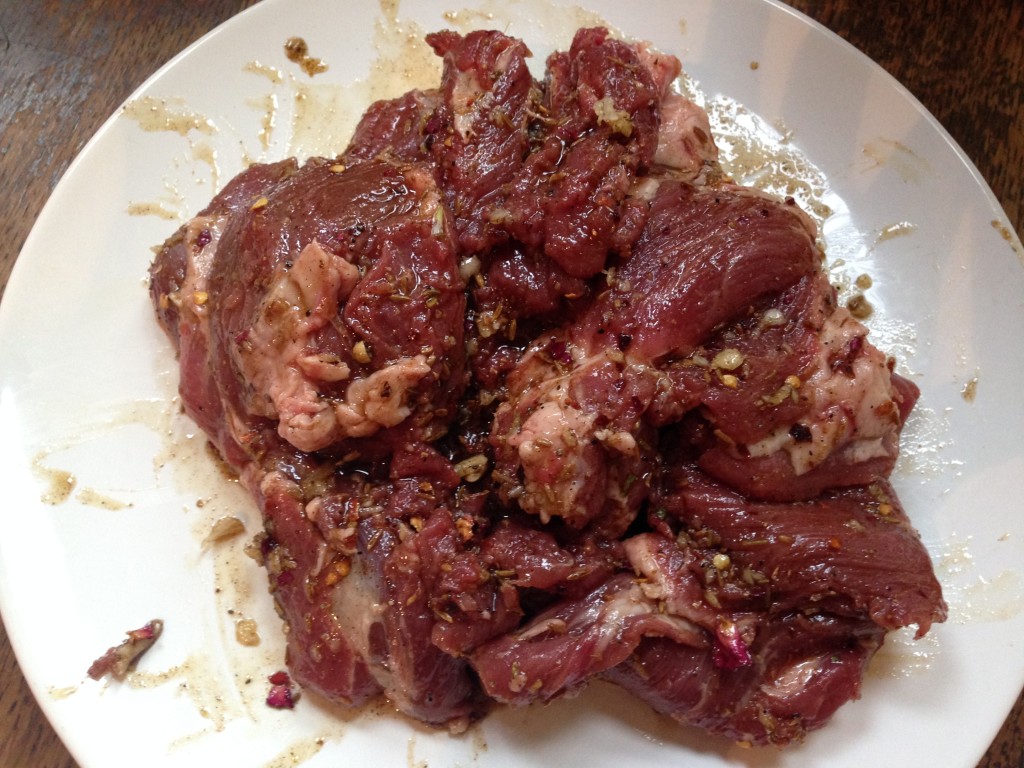 Rub in the marinade and leave for a few hours

When ready to cook, season the meat with salt. This is great on the barbecue, but yesterday I used the hob-oven approach: get a heavy frying pan really hot, sear the meat for several minutes on each side, then finish in a 180c oven until done to your liking. This piece was seared for 4 minutes each side then had 15 minutes in the oven and came out just pink. When done, leave to rest for 10 minutes or so.

Lamb is very forgiving so if you want it well done, just cook for a bit longer. For falling-apart lamb, I’d use shoulder and cook in the oven at a lower temperature, say 150-160c, for a couple of hours. 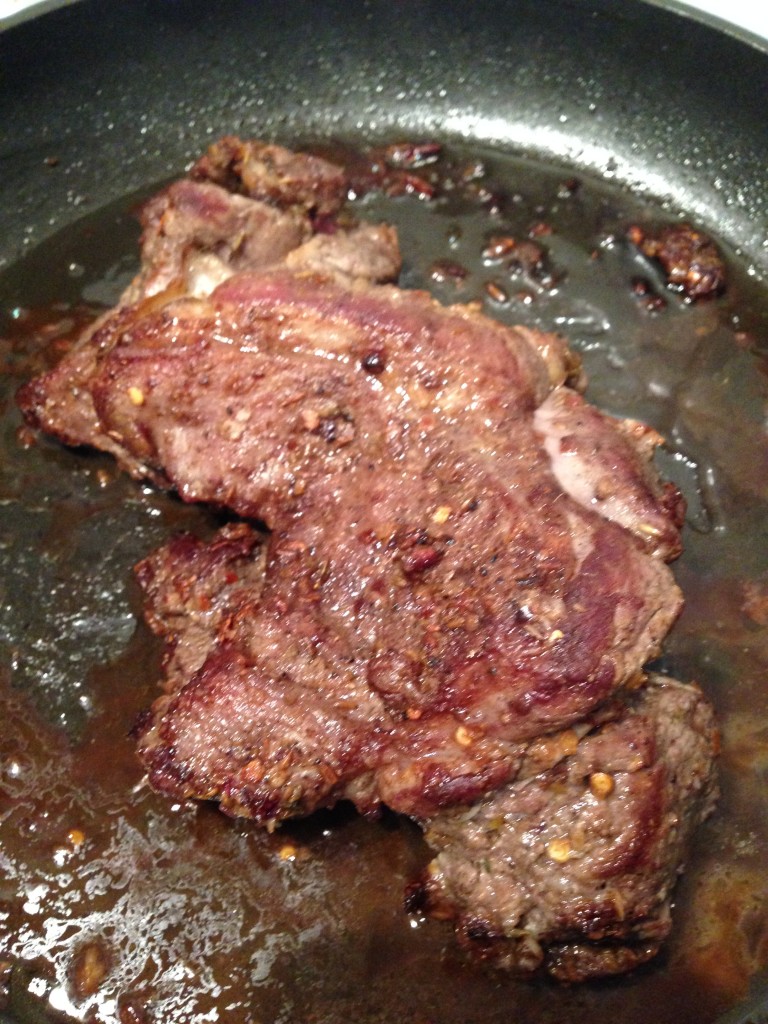 To serve, I made an aubergine relish: Dice an aubergine or two and roast with really good olive oil for about 30 minutes. Meanwhile, sauté a chopped onion until soft, then add cinnamon, cumin, coriander, all-spice and paprika. Add tomatoes and a pinch of sugar, and cook until nicely combined – about 20 minutes – adding the aubergine at the end. Finish with whatever herbs happen to be around; parsley, coriander, mint, all good. 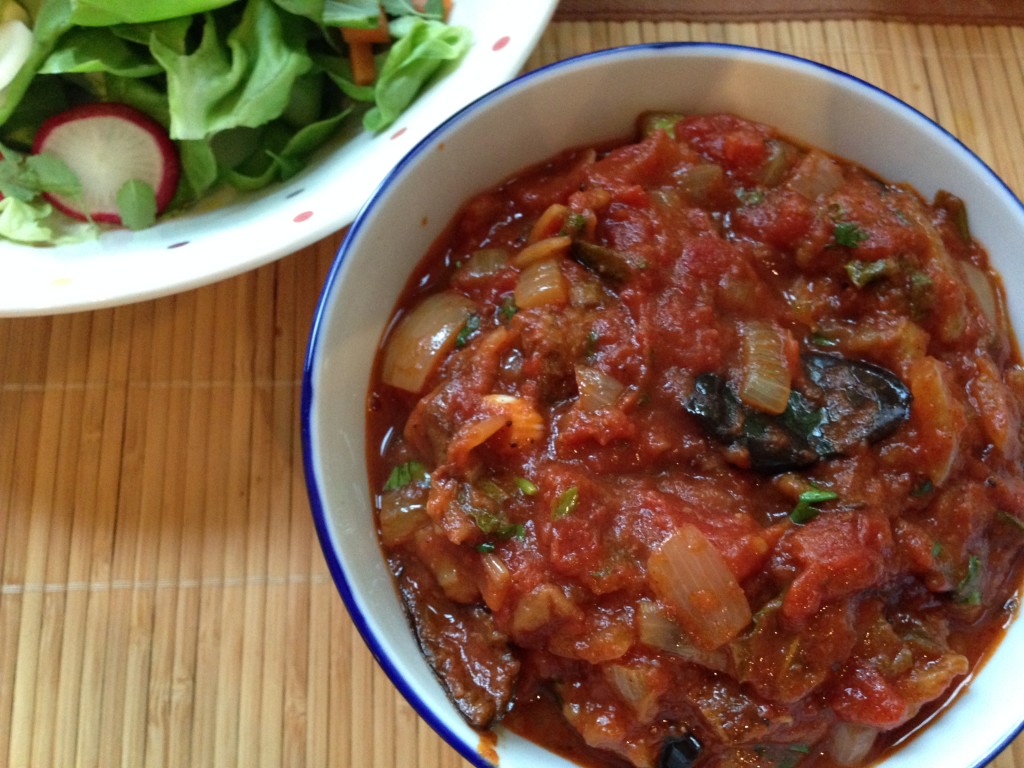 Serve with aubergine relish and salad

The marinade brings out all the lovely lamby-flavours. There’s the kick from chilli, that earthy flavour that cumin provides, and lovely toasty bits from the pan-searing. It feels like a special occasion dish but is actually easier-than-pie. Hurray for lamb! 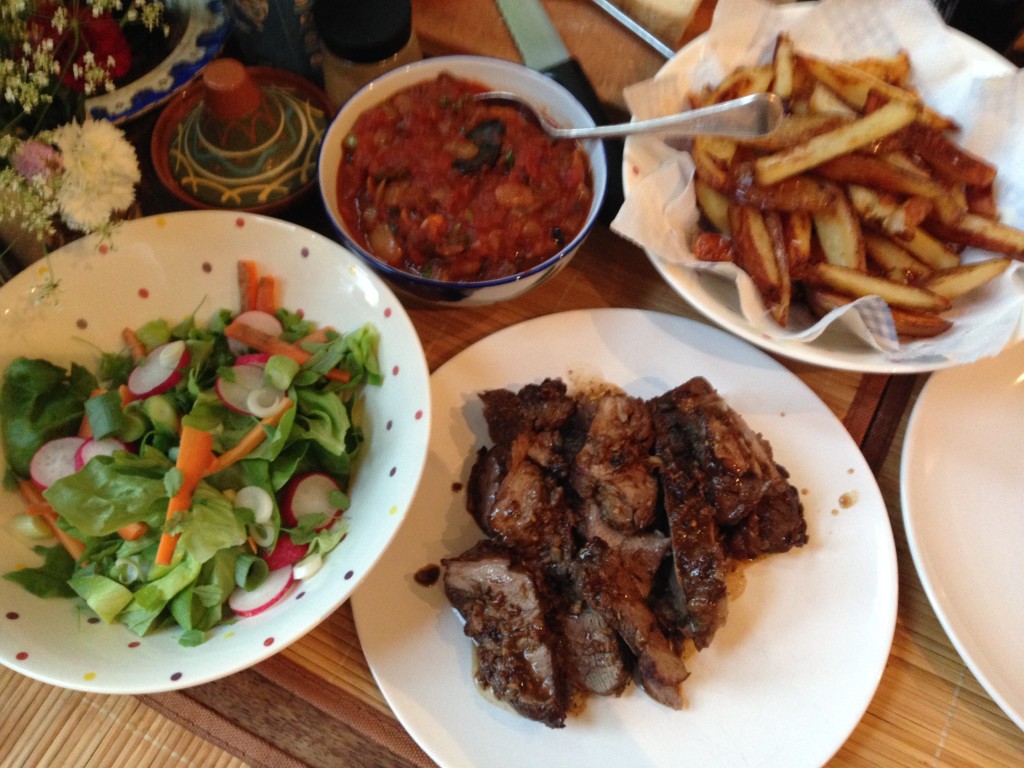 A feast of lamb!

Half leg of lamb, boned and butterflied

Pound the garlic in a pestle and mortar, then add the cumin and chilli and bash until broken down a little. Stir in ras-al-hanout and olive oil. Massage the marinade into the lamb, cover, and leave for several hours (overnight in the fridge is fine). When ready to cook, pre-heat oven to 180c. Season the lamb on both sides with salt. In a heavy-based frying pan that can be put in the oven, sear the meat for 4 minutes each side, until nicely browned. Move the pan to the oven and roast for 15 minutes, or until done to your liking. Rest for 10 minutes before serving. Serve with aubergine relish, yoghurt, salad and a starch for the juices…rice, chips, couscous, bread.

Tin tomatoes, or 5 fresh tomatoes, chopped (and skinned if you can be bothered)

Dice the aubergine, toss with a glug of good olive oil and roast at 200c for about 20-30 minutes until soft and slightly charred around the edges. Meanwhile, toast the whole spices in a dry pan until the scent rises; transfer to a pestle and mortar to cool. Sauté the onion in more olive oil until soft and translucent. Bash the cumin, coriander and allspice until powdery, then add to the onion with the cinnamon,  paprika and a pinch of salt. Cook for a scant minute, making sure it doesn’t burn. Add the tomatoes and a pinch of sugar then cook on a low heat until combined and sauce-like, about 20 minutes. Add the aubergine and cook for a further few minutes. Finish with herbs. Good hot or at room temperature.