So much for Calm January! As usual, the quiet first few days of the new year have given way to busy-busy-busyness: I’ve taken on a few small work projects to keep my hand in, and these, combined with baby-care, mean the days are disappearing. Which is no bad thing: the dark days of January drag on a bit, don’t they?

Today’s other juggling act has been the making of marmalade. Seville oranges are in the shops now and the season is short, so there’s no real time for delay. Marmalade-making is meant for a slow, pottering day in the kitchen…but in our house I had to fit it in between copy-writing jobs, during nap times and after bedtime. Note: This does not lead to a relaxing few hours of cooking. But on the plus side, I discovered an unexpected upside of having a baby in the house, namely the microwave bottle steriliser that now doubles up as my jam-jar steriliser.

This recipe is Nigel Slater‘s and makes 6 large jars.

Take 1kg of Seville oranges and 2 lemons. Score the fruit from top to bottom, to separate the rind from the fruit within. 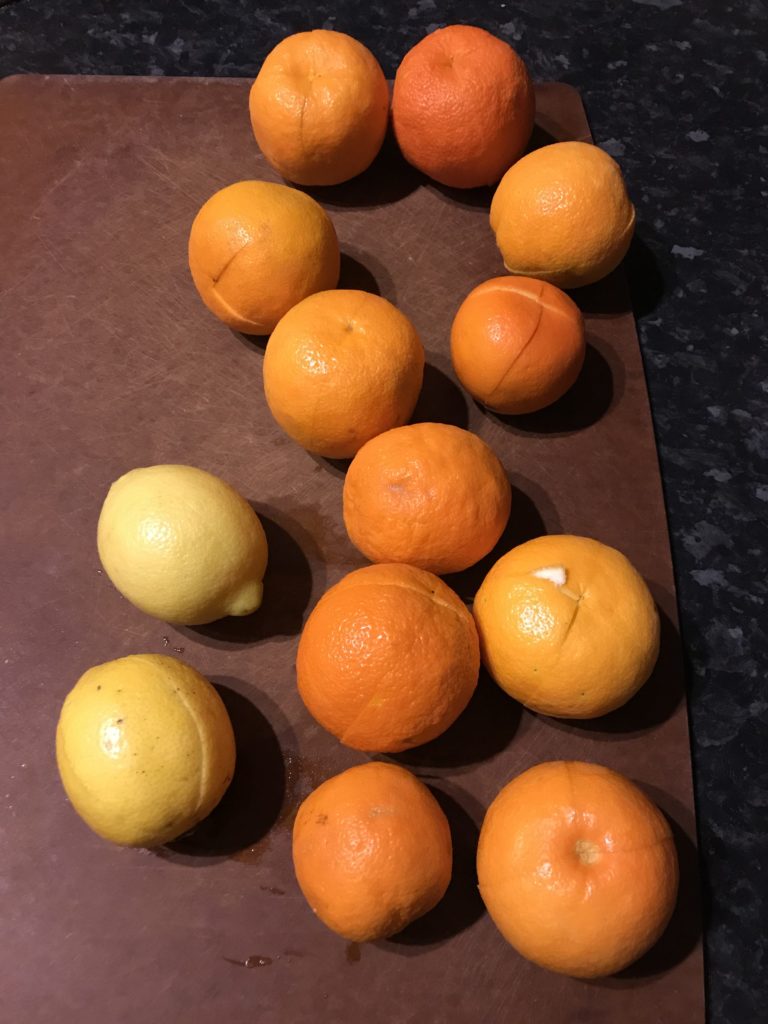 Score the rind of 1kg Seville oranges and 2 lemons

Next, separate the peel from the fruit and place into separate bowls. 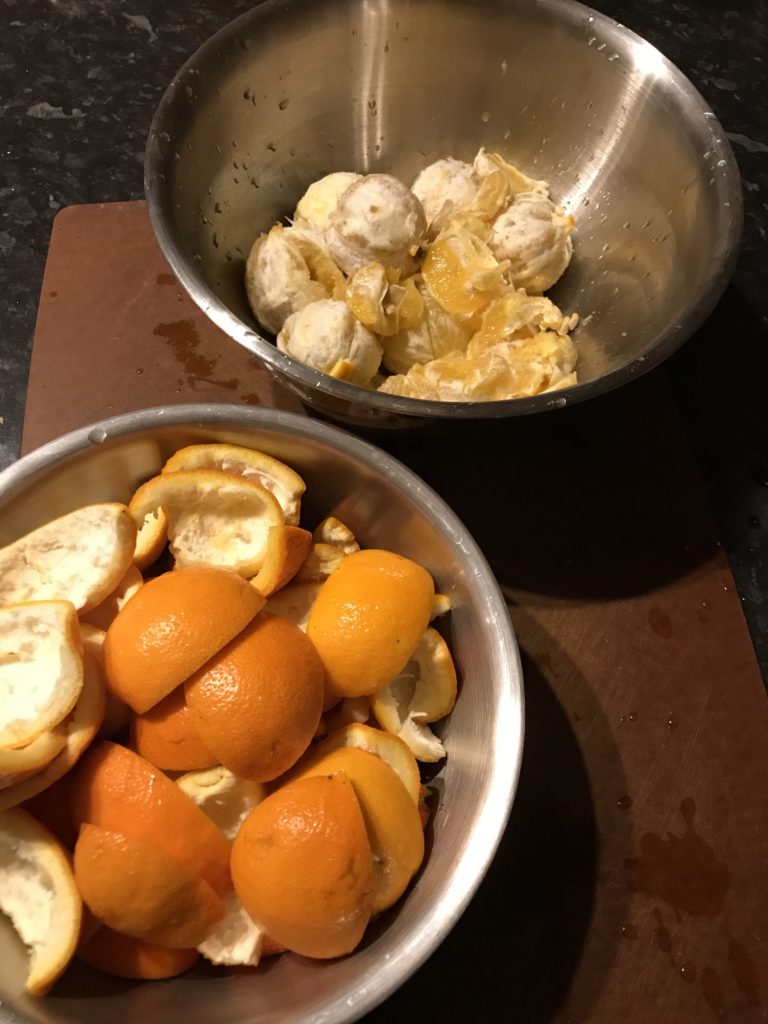 Separate the rinds from the fruit

Using a sharp knife, slice the rind into thin strips. In truth mine are little thick – but it depends how chunky you like your marmalade. Squeeze the fruit segments through a sieve into a bowl, reserving the pith and seeds. 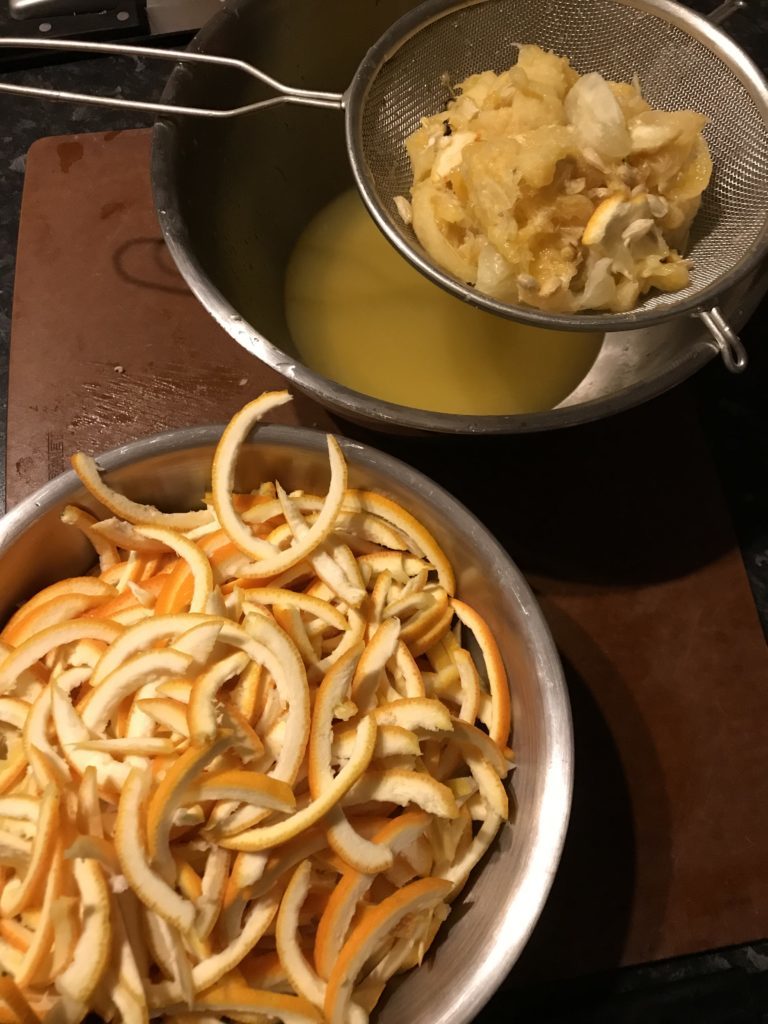 Finely slice the rinds and squeeze the fruit, saving all the pips and pith

Place the pith, pips and other orangey detritus into a muslin bag and secure it tightly. These contain lots of pectin, which helps to set the marmalade. 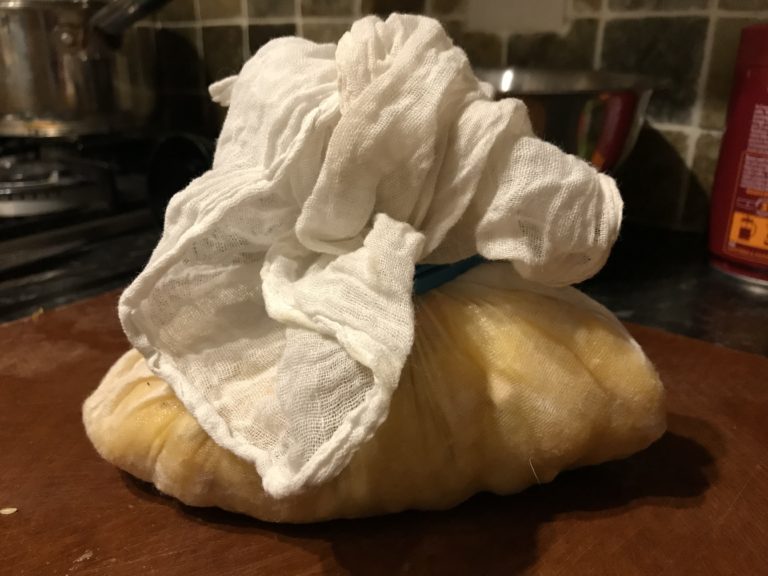 Put all the pips, pith and general orangey detritus into a muslin bag

Then get a massive bowl, measure the squeezed orange and lemon juice, and add enough water to make up the quantity to 4 litres. Add the strips of rind and the muslin bag, then leave to sit overnight. 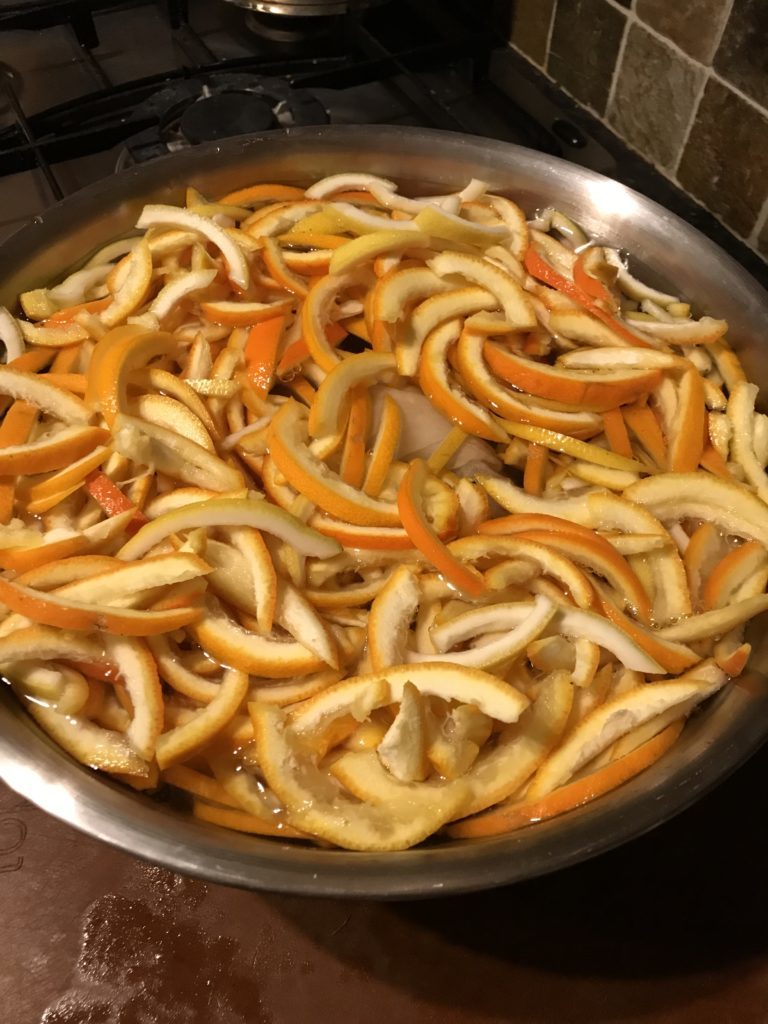 Make the juice up to 4 litres, then leave the rind, juice and muslin bag to sit overnight

The next day, transfer the lot to your biggest pan – ideally a preserving pan – and bring to a simmer. The rinds need to be cooked until soft, the timing of this depending entirely on how thickly they have been sliced (mine took 40 minutes). 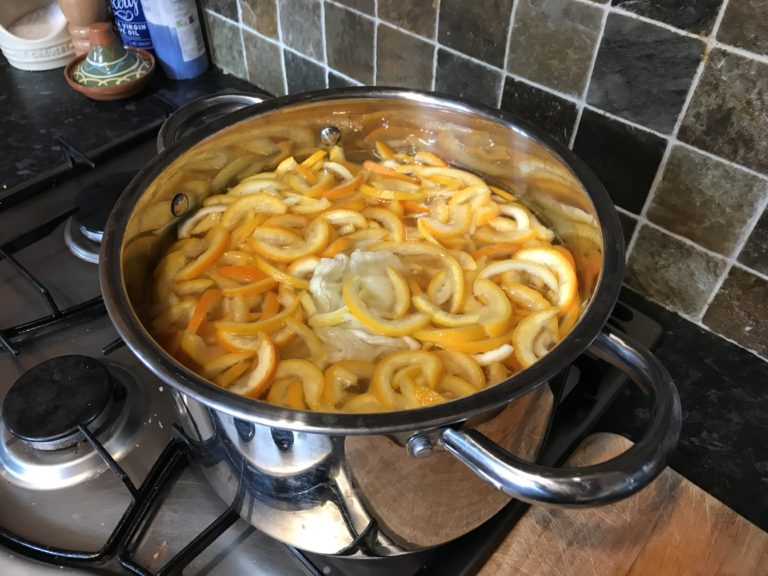 The next day, use your biggest pot to simmer the rinds until soft

In the meantime, get on with washing and sterilising your jam jars – I used the baby bottle steriliser but 10 minutes in a hot oven will do the same job.

In the meantime, sterilise the jam jars

When the rinds can be easily broken against the side of the pan, they are done. Remove the muslin pan from the pot and leave aside until it is cool enough to touch, then squeeze it hard and return any juices to the pan. 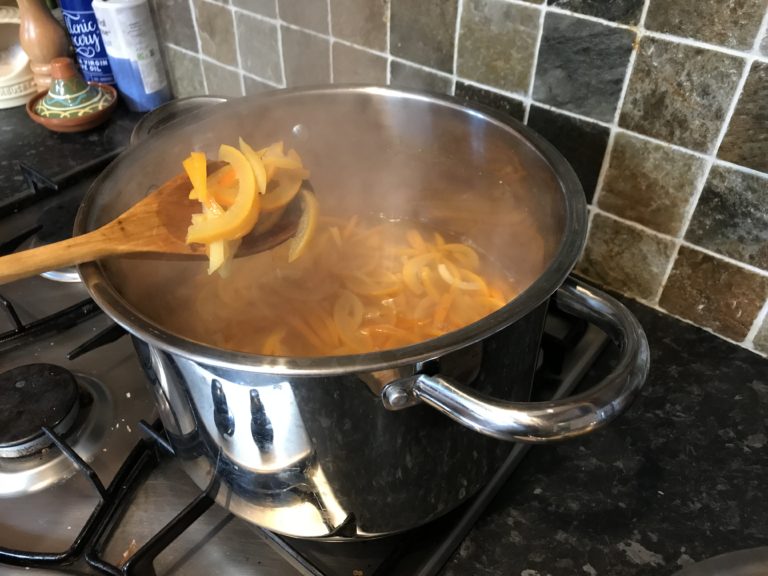 Your windows will get steamy – enjoy! 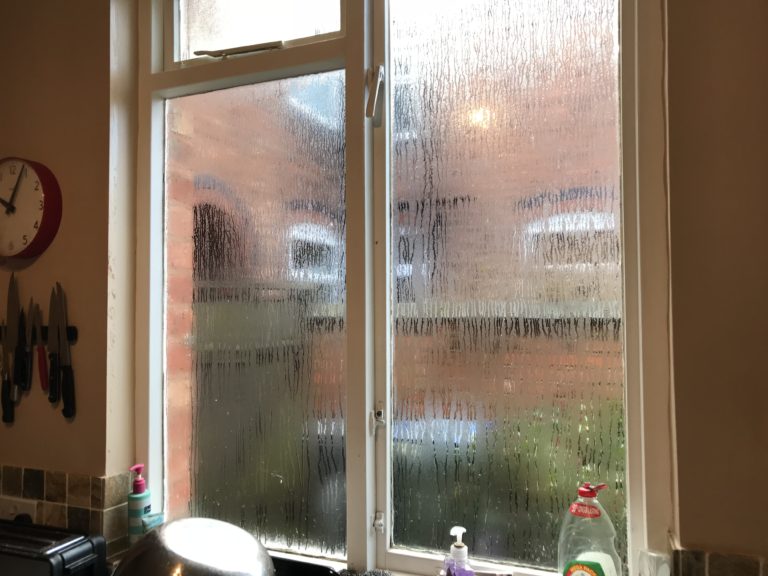 Your windows should get good and steamy

Add 1.25kg granulated sugar to the pan. You can use golden caster sugar here, which will give you a darker marmalade, but I prefer the lightness of regular white sugar. I warmed mine in the oven, which Nigel Slater does not mention, but I understand this is an important part of making preserves and it definitely won’t do any harm. Stir the sugar over a low heat until it has dissolved. 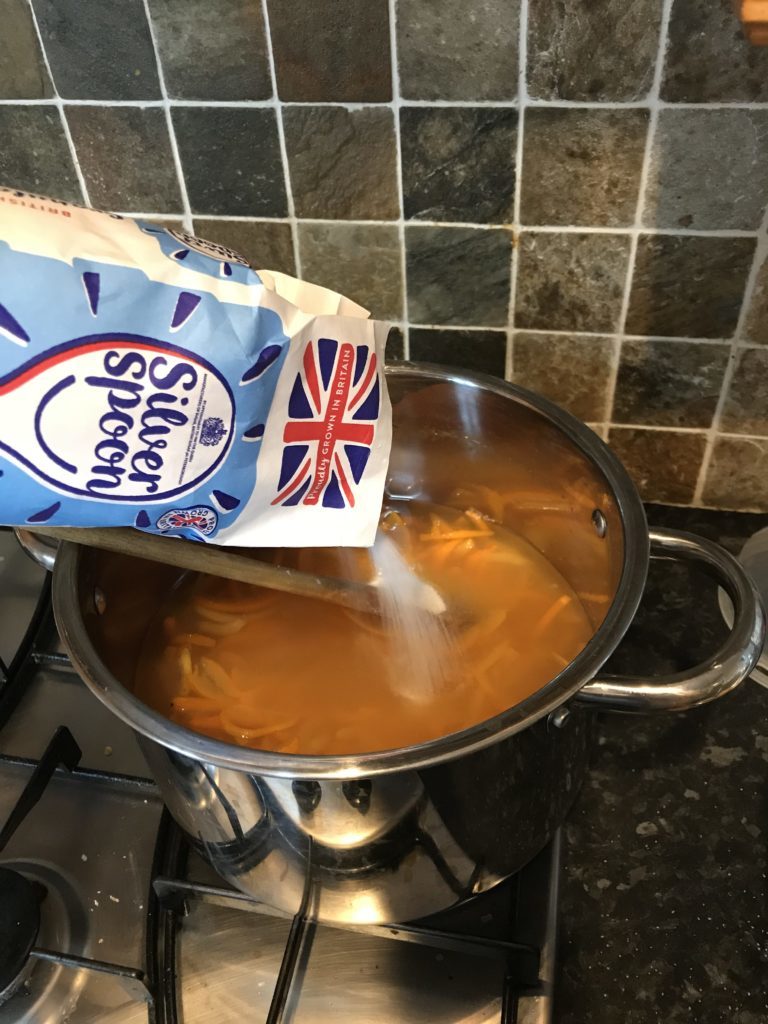 Now ramp up the heat and boil the mixture hard until the thermometer reaches 105c. You can also use the teaspoon-of-mixture-on-a-cold-saucer trick….but I prefer the scientific approach. It can take up to 50 minutes to get to this point. 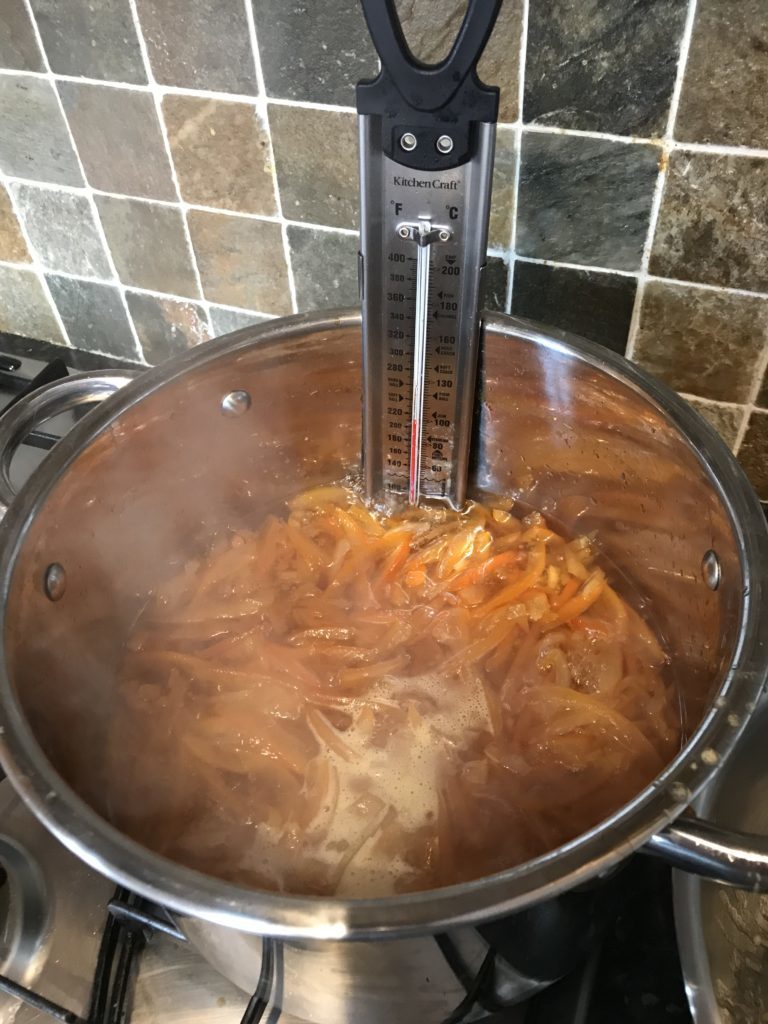 Ramp up the heat and boil until the thermometer reads 105c

Leave the marmalade to sit for 15 minutes and then ladle into your jars. Cover, cool and enjoy! 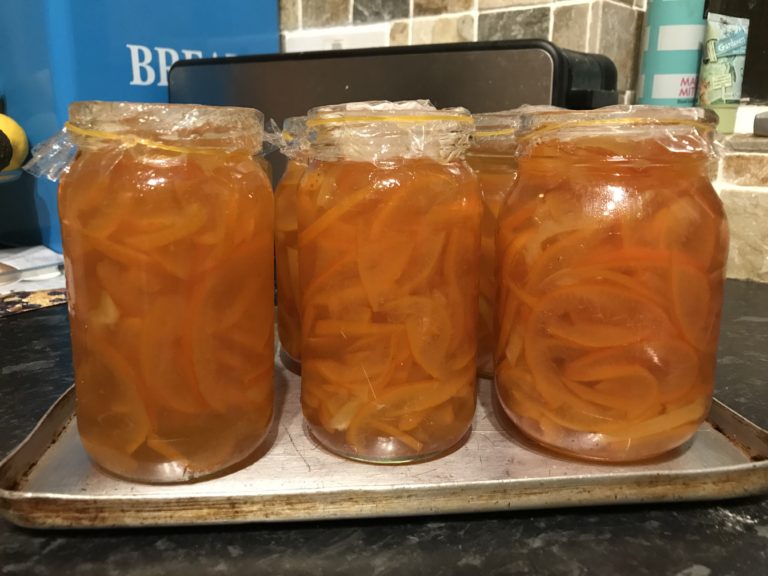 Stand the mixture for 15 minutes and then ladle into the waiting jam jars. Cover and leave to cool.