The temperature in our house has plummeted in recent days from long-sleeve-t-shirt-with-thick-cardigan temperature, to proper-jumper-plus-thick-cardigan-and-socks-but-still-really-cold temperature. The windows are permanently hazed with condensation and I find it inconceivable that I ever used to wander around in shorts with nothing on my feet. What madness was that?!

This means that we have arrived firmly in autumn. Actually we might be fast-forwarding through autumn in a rush towards winter, given this weekend’s chill wind. Aside from these nonsense low temperatures, autumn brings with it a great many pleasures, most of them culinary. It’s quince season for one. You can buy the fuzzy aromatic pear-shaped fruits in the halal shop on Bearwood High Street for £1 each, or I found this basket of 50p fruits in Moreton-on-Marsh the other day. 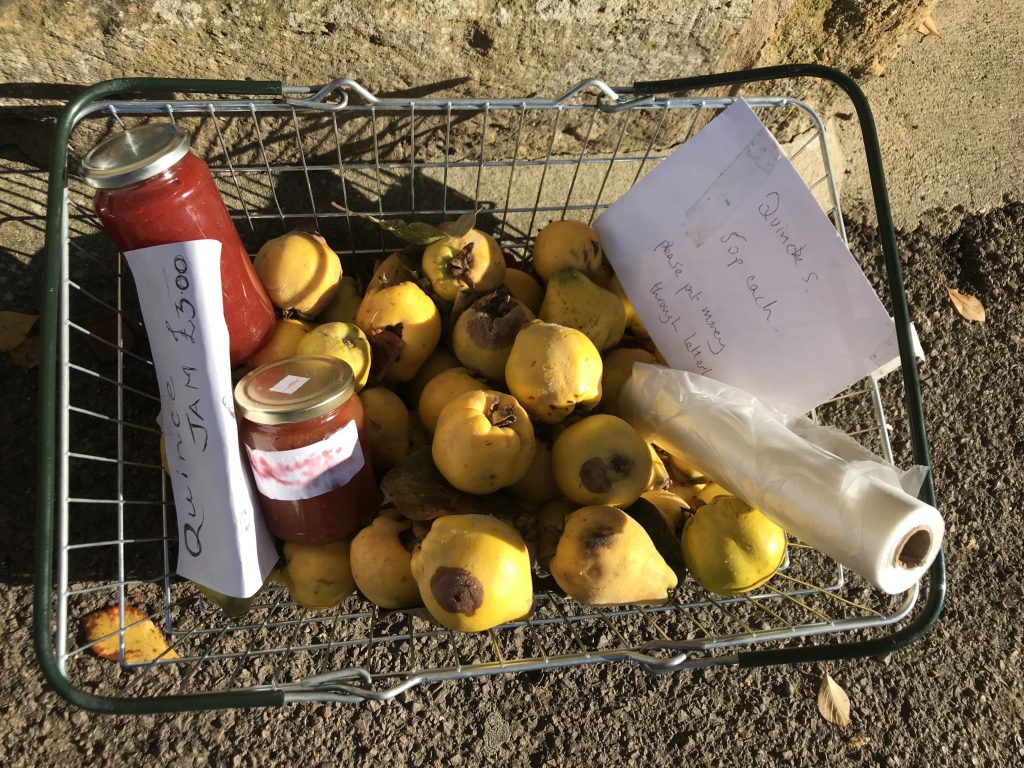 Quinces a bargain 50p each in Moreton-on-Marsh

Pumpkins and squash abound, of course, in the run-up to halloween. My local Aldi is selling ‘decorative’ turks turban and blue prince squash for 39p each – presumably they think people will use them as table decorations but I’d rather cook with these than a butternut squash anyday. In Ludlow on Saturday, the pumpkin prices were higher but the colours just as fun. 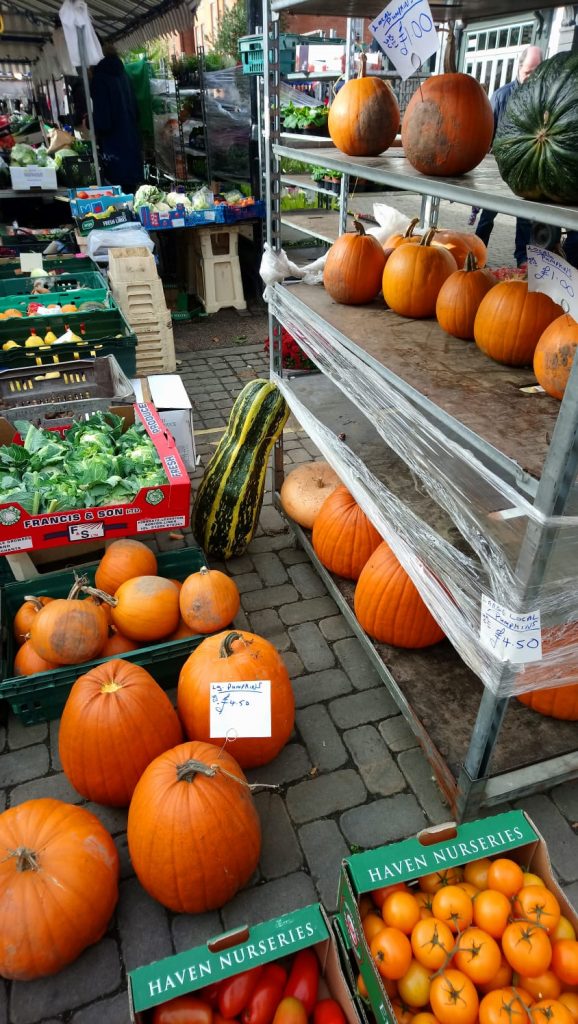 We were in Ludlow for our annual freezer-filling visit. I have come to the conclusion that there is nowhere better in the UK to stock up on game, meat, cheese and proper veg (i.e. field-fresh, knobbly and ideally still crusted in mud). Add to that the independent shops, the cosy pub that serves really good pies AND has an open fire, the Ludlow Brewing Company, the castle and the glorious country drive and you have the perfect escape from the city. It’s also surprisingly good value. We came home with (VEGETARIANS PLEASE LOOK AWAY NOW) 2 pheasants, 2 rabbits, stewing venison, stewing mutton, oxtail, 1kg beef mince, 1kg braising steak, Italian sausages, pork pie, a round of cheese, amazing pain de levain and purple sprouting broccoli for less than £55. We’re not talking rubbish meat here, we’re talking meat that someone has taken care over, but without the pretension that you find in the posh urban butchers.

The rillettes are a particularly welcome addition to the autumn kitchen. The rabbit is slow-cooked with pork belly, thyme and garlic until shreddable, then packed together with their cooking liquor (which is essentially lard, let’s face it) to make a subtly-flavoured pate. Keep a tub of these in the fridge for topping warm buttery toast: lard and butter, working together to keep out the autumn chill.

First, joint a rabbit (or get the butcher to do it for you). Remove the rind from 500g fatty pork belly and dice into chunky cubes. Place the meat in an oven-proof dish with sprig of fresh thyme, 3 bay leaves, a bulb of garlic sliced in half through the centre and 250ml water. The meat should be in a single layer so that it cooks evenly. Cover tightly with foil and bake at 220c for 30 minutes, then reduce the temperature to 140c and cook for 2-and-a-half hours more, until the rabbit and pork can be shredded with a fork. Give the dish a prod every now and then during the cooking to ensure that it’s not drying out (top with a little water if you need to). 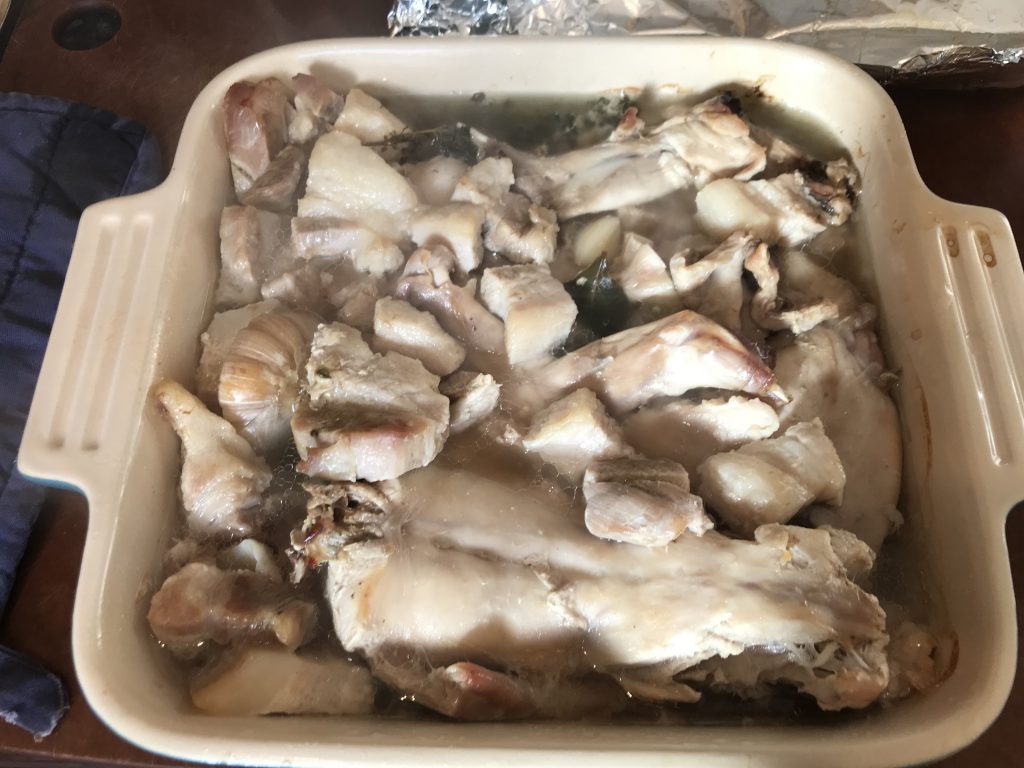 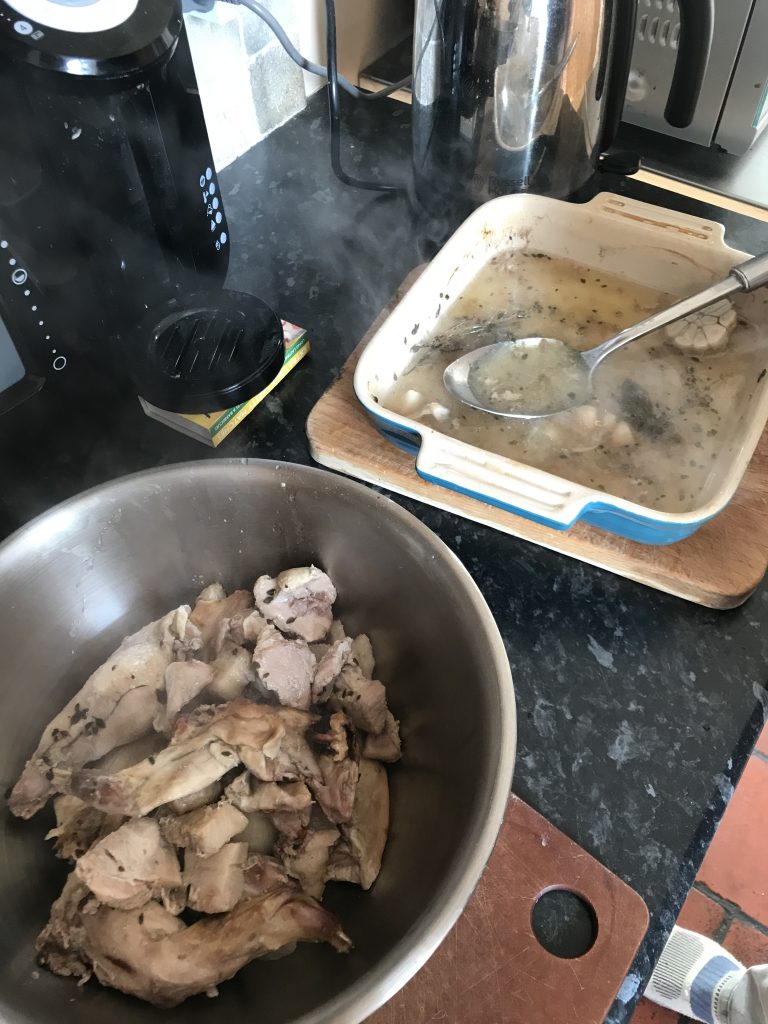 Strip the meat from the bones and save the liquor

Thoroughly mix the two meats together and season well with salt and pepper (you could also add some nutmeg or mace now). Add a good splash of the cooking liquor and stir until you achieve a loose pate texture, adding more of the liquor as needed. Transfer your rillettes to tubs or jars, and refrigerate until firm. 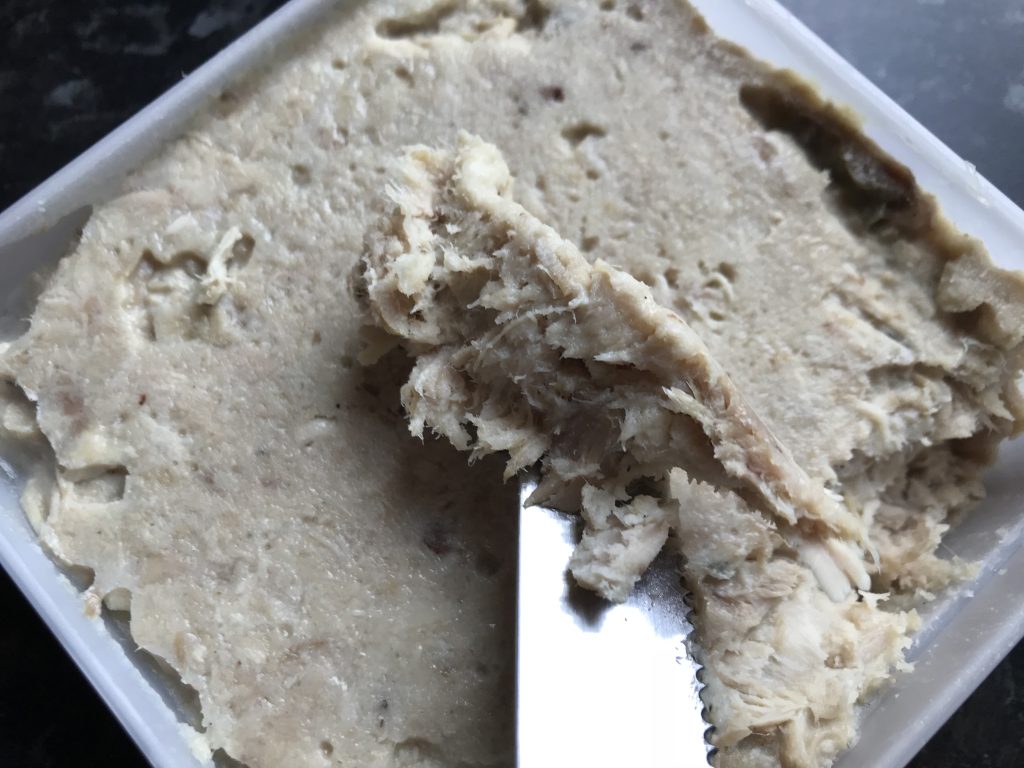 Pack the meat into your container and chill

Serve on hot toast, preferably with something slightly acidic to counter all the lard. A cornichon or pickled onion is just the ticket. The rillettes will keep for several days in the fridge, or you could make a few jars and freeze what you don’t need for a later day. 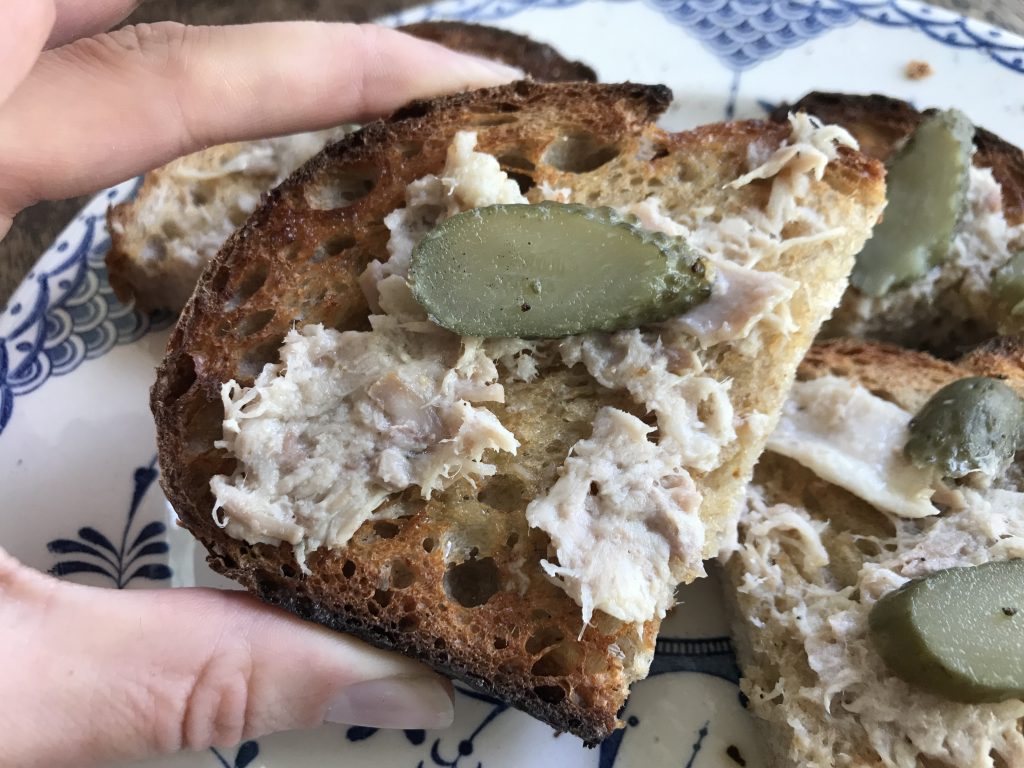 Serve on good toast, ideally with something pickled

Cooking & Eating: German bienenstich (bee sting) cake, spiced squash soup, pies at The Crown Inn in Ludlow, hake from the Birmingham fish market with chorizo. Stollen-watch has begun: Aldi has its mini stollens in, which means the proper ones won’t be too far away.

Reading & Watching: The Apple Orchard by Pete Brown, a love story to the English apple tradition with plenty of references to Herefordshire. The Prawn on the Lawn cookbook by Rick and Katie Toogood.

Visiting: Batsford Arboretum to make the most of the autumn colour. Ludlow for freezer-filling. The new BOM cafe, near the Bullring markets – a cosy cafe that has been designed to be friendly to autistic people.

On the allotment: Still harvesting cosmos, chrysanthemums, chard and cavolo nero. It’s time to clear: Matt has started to remove the thicket of brambles at the back of the greenhouse, I’ve pulled up most of the annuals and veg, and have put black plastic on the one plot to protect the soil and keep weeds down. It’s nearly time for a bonfire.