I think I’ve been in the middle of some weird space-time black hole because I have no idea, really no idea, how it is nearly November. I was working so relentlessly on Birmingham Weekender that the summer swept by, and then illness took over, and I’ve emerged to find that the world has skipped on to full blown autumn. Bye bye summer sun, sweet peas, fresh lettuce and courgettes; Hello concrete-coloured skies, chrysanthemums, golden leaves…and game. It’s game season again: stock up the freezer whilst it’s good and cheap

The allotment, well-behaved as she is, has been waiting patiently for the past month for someone to come and tidy her up. The sunflowers were over weeks ago, likewise the green beans, courgettes, tomatoes, chillies, cosmos and calendula. Actually, I say cosmos – the self-seeded ones were still going strong at the weekend, but without support were flopping all over the place and so I’ve called time on them all.

We found a few hours last week to begin the big Autumn Clean-Up. The greenhouse has been emptied, sunflowers felled, summer annuals razed. The biggest casualty so far has been the artichoke, who had grown far too big for her boots and so fell victim to the spade. 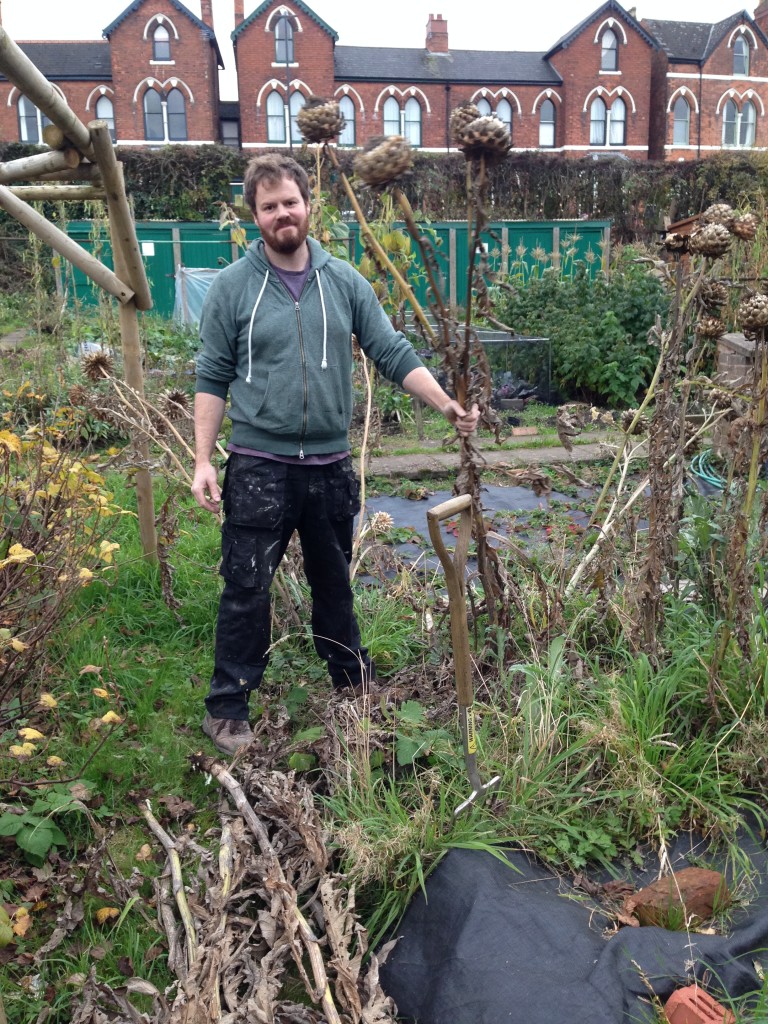 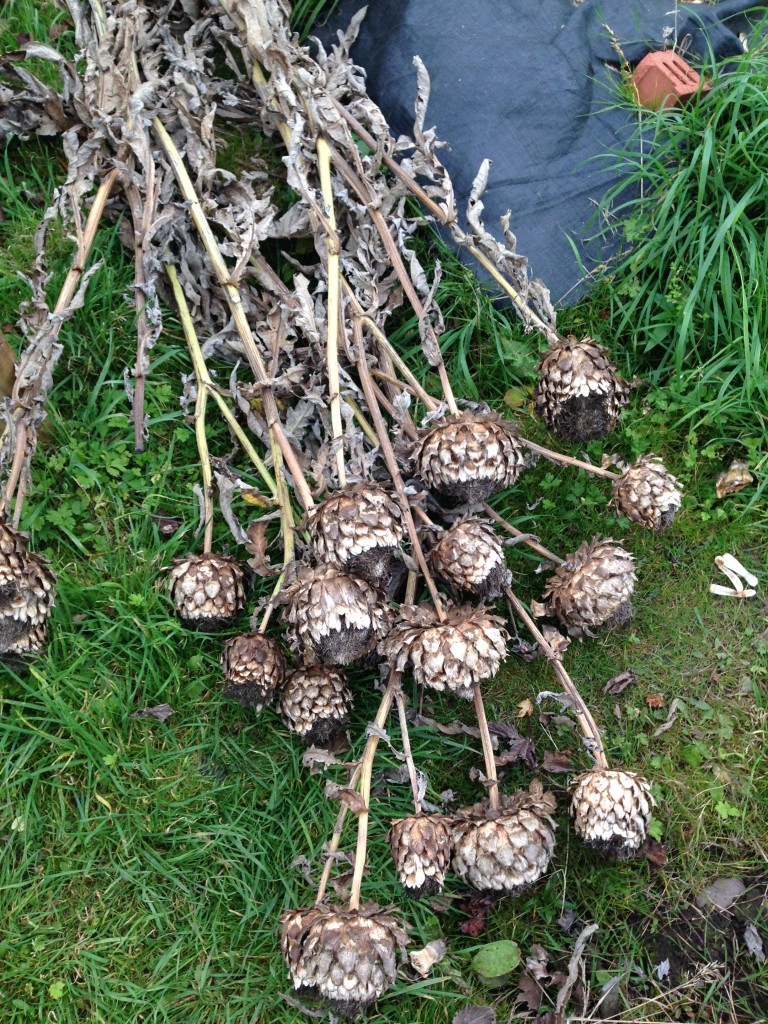 It’s not been a bad year, but it’s not been a great one either. The greens that I planted out in April are still cropping – amazing! – keeping us in chard, spinach and sorrel. Likewise the carrots and parsnips are doing OK, and the soft fruit bushes have once again filled the freezer. But the leeks are sad with rust, the tomatoes were bland, and the beans were terrible.

The hop has shown its intentions this year, growing taller and more vigorous than we could have imagined. It was all in vain: we missed the key harvesting time and so once again, the aromatic cones are destined for the bonfire. It’s a perennial, which is perhaps our problem: there is always next year, the next harvest, and we’ll do it better then. 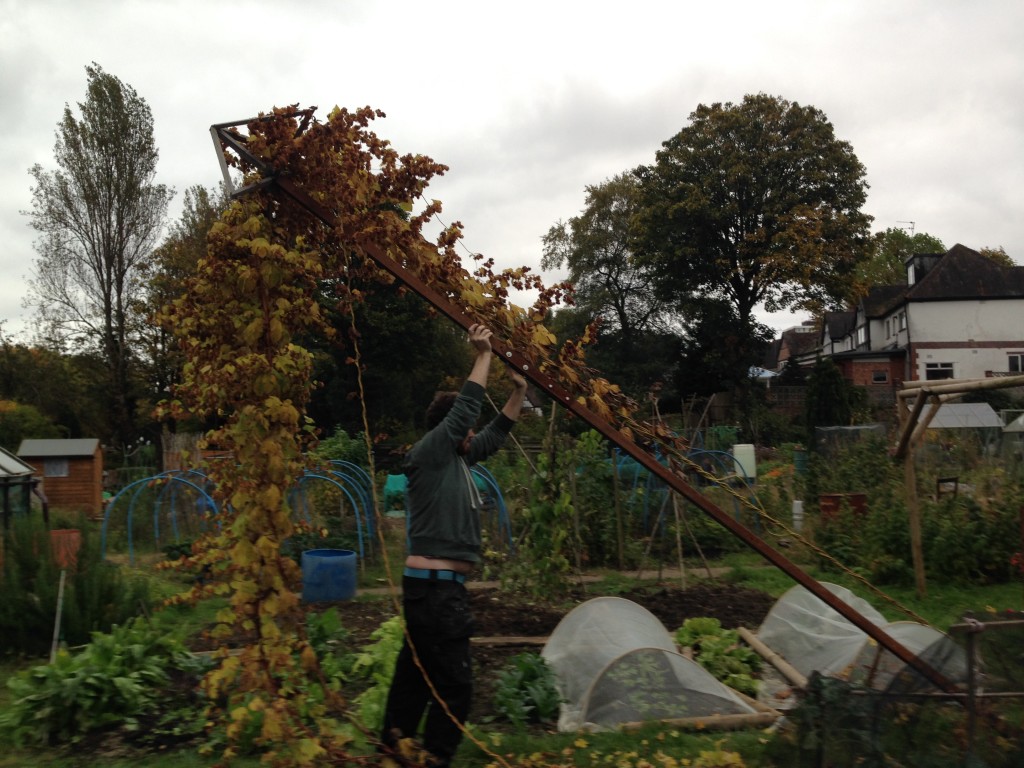 The hopolisk has come down… 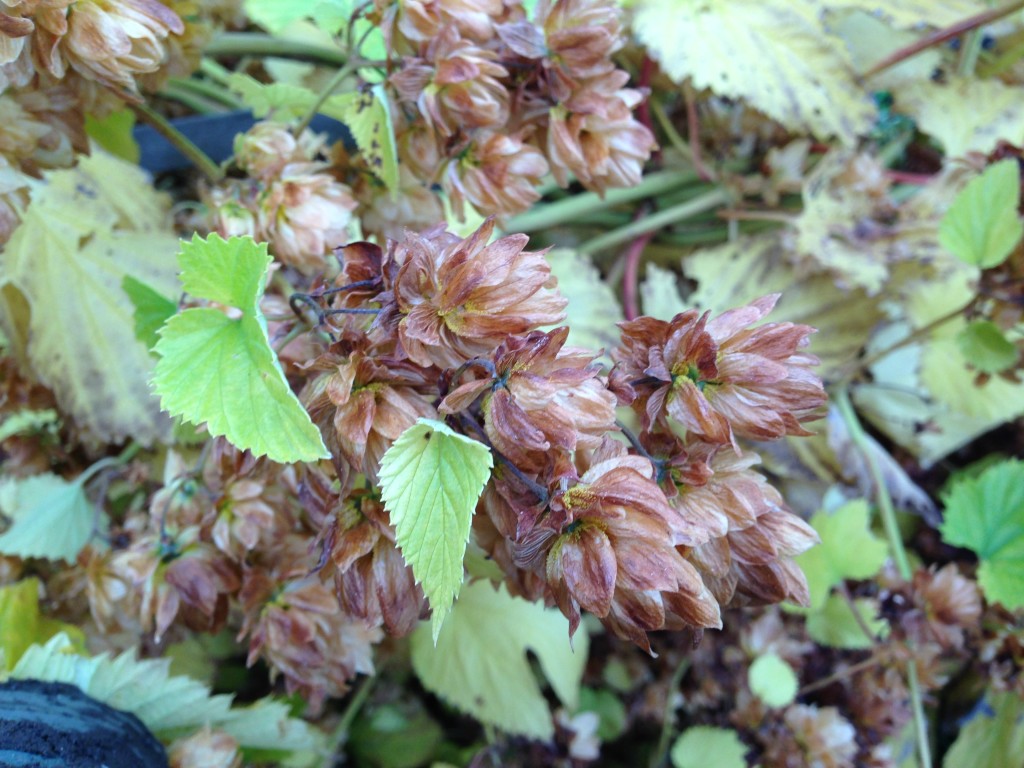 …but whilst beautiful, these hops are too far gone to be useful 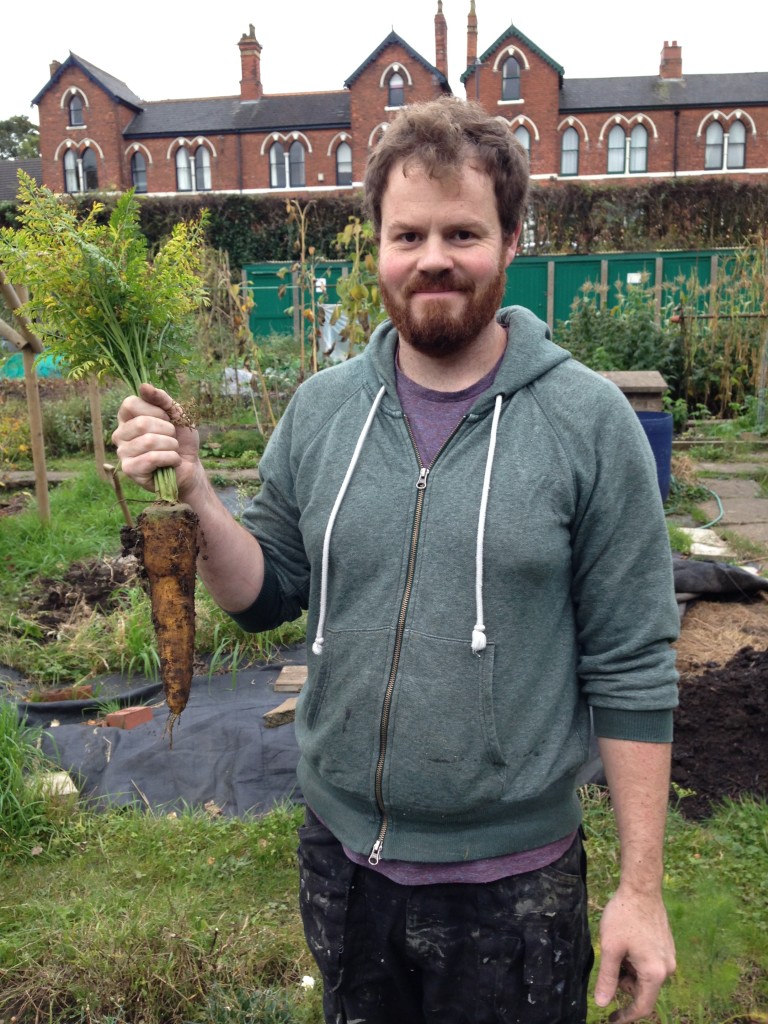 Though we are now pulling monster carrots!

I’ve not bought any flowers since late spring (bar the odd lily), which is a minor personal victory. My cut flowers have not been magnificent, but (to my mind at least) better: small, charming, happy, bright little posies for the kitchen table. First came the delicate sweetpeas, ammi and nigella, then the summery cosmos, calendula and all those characterful sunflower faces, and now the dahlias and crysthanthemums finish the year with a blaze of jewel colour. Next year I hope to start cutting earlier and so I’ve put in spring bulbs – daffodils, tulips and aliums. Fingers crossed for good blooms come March. 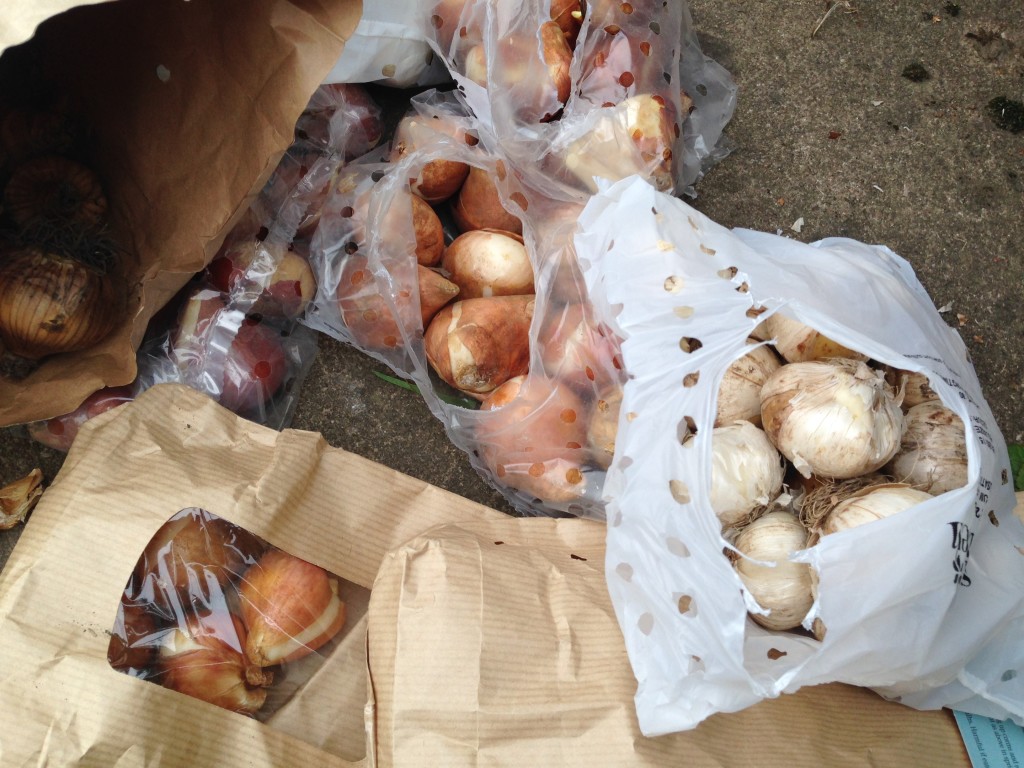 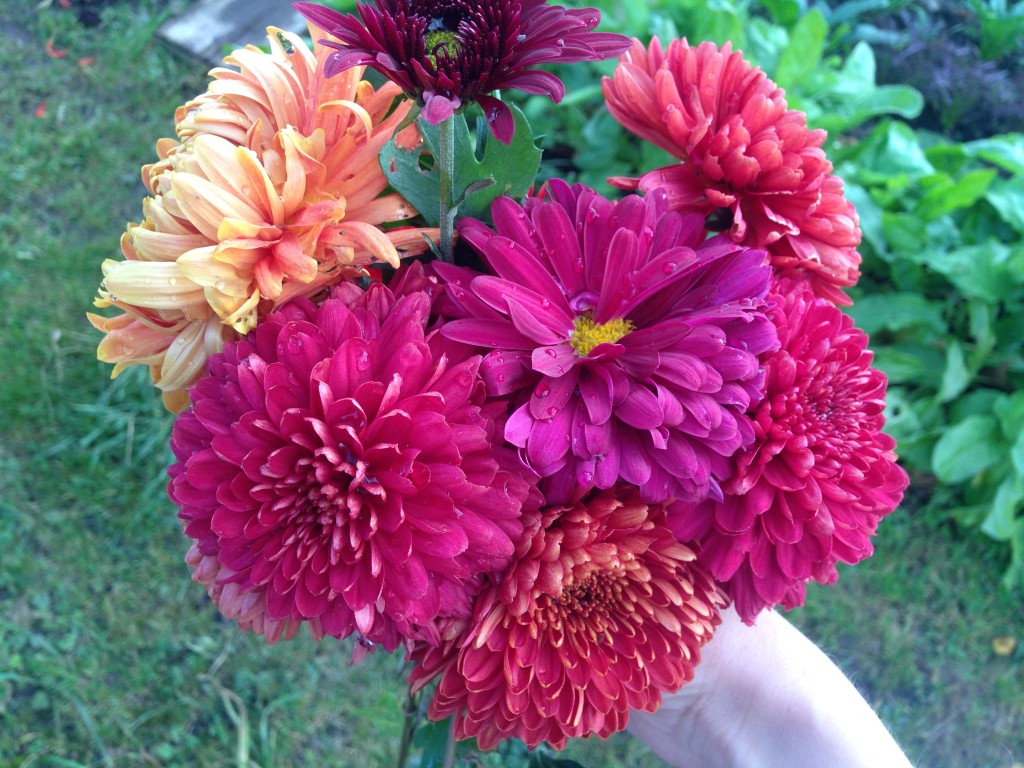 Bright blooms for the house 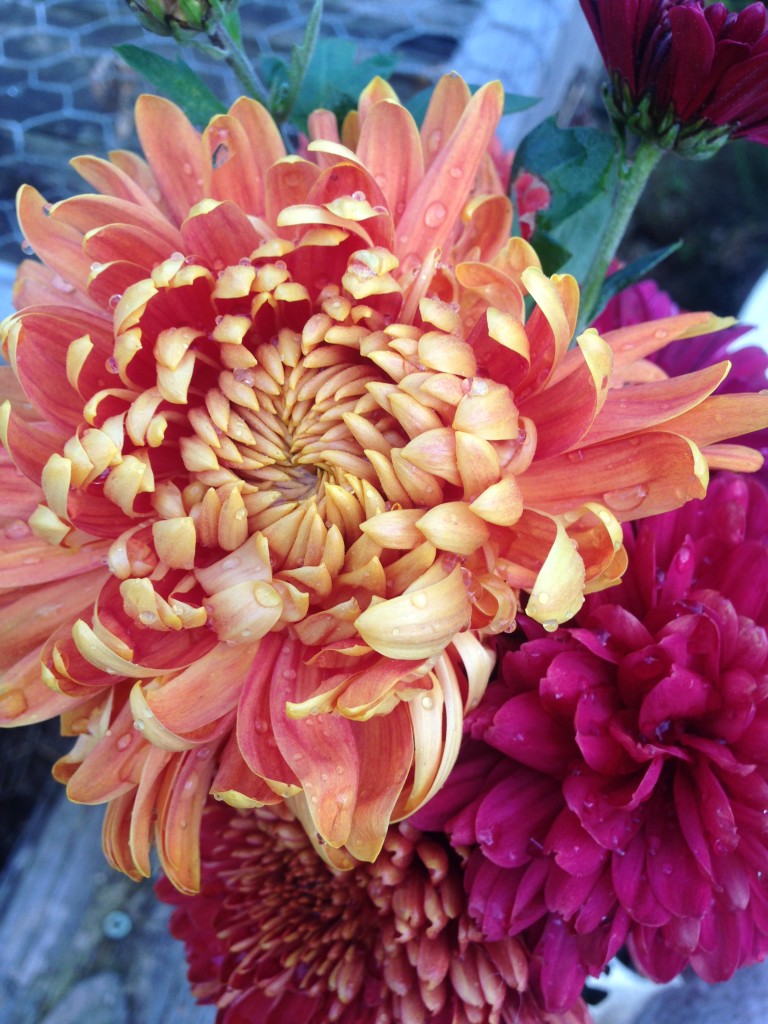 Not content with flowers, I’ve been foraging for autumn windfalls. Not fruit, but hawthorn branches, old man’s beard and other dried stalks. Along with those artichoke heads, I’ll spray-paint them gold and place in a glass vase to make tall and (hopefully) eye-catching Christmas displays. This is recycling, allotment style. 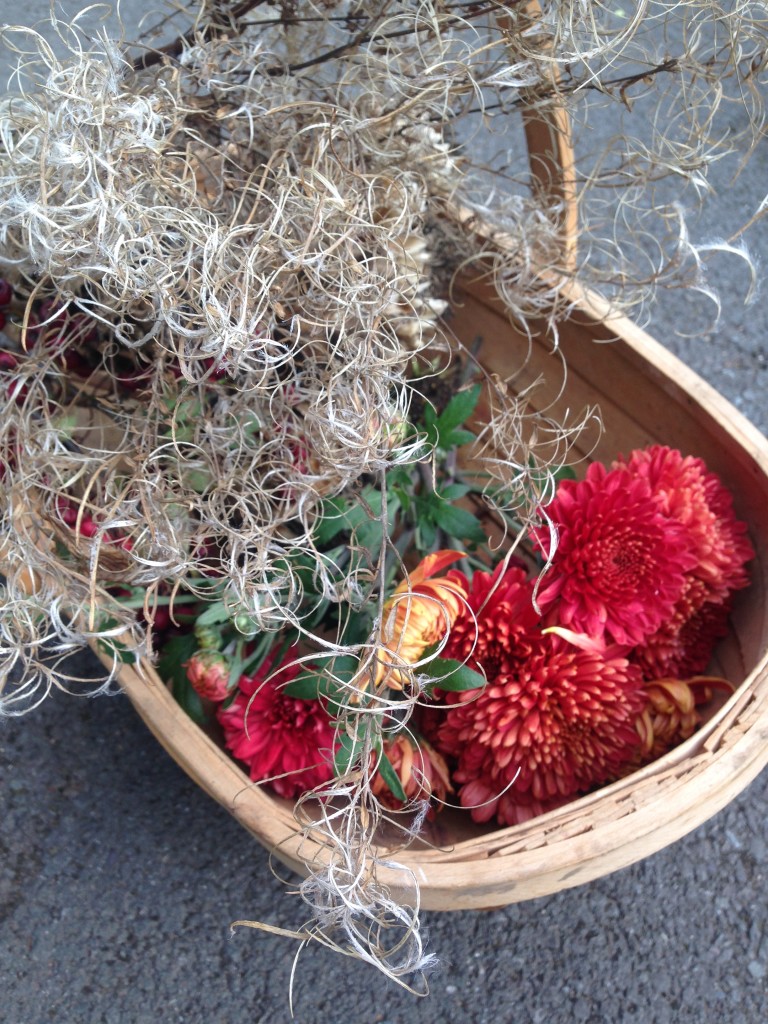 A basket of autumn delights to decorate the house

There is still work to do. The brassicas are not looking promising, something really must be done about those leeks, and we need to get on with collecting and spreading manure to give the soil a boost (all the fun jobs). But now that it’s dark at 5pm, it’s rather more appealing to curl up with a blanket and a good book. The turn of the year is upon us.