Well yesterday was a bombshell moment wasn’t it? We were awake from 3am, periodically refreshing the news feed on my iPhone, despite knowing that news-checking would only increase the sense of impending doom.

I did expect this outcome, surely we all did: the “cry of the forgotten man” has been a regular refrain in the post-Brexit referendum analysis and in this age of globalisation, it is a cry that is being felt across the Western world. Whilst some people are benefiting from the modern age, so many others feel left behind and the result is an existential crisis that is playing out through society, politics, the media.

My sister-in-law (American but living in London) declared that both countries of which she is a citizen have taken crazy pills. The news today tells us that more people actually voted Clinton than Trump. A nation is divided and it has an impact on the entire globe. On this side of the Pond, we have to watch and wonder what new order awaits.

I have been reading several books lately that were written in the 1930s: some novels, some gardening books, a few memoirs. Yesterday morning, I got to thinking: what must it actually be like to live a time of even greater political uncertainty? Of actual war? With hate speech in the air? What could the ordinary person do to keep themselves sane? And the answer is there in the books*. They got busy. They looked after their own, got their hands dirty, did normal, elemental things to remind themselves of goodness and rightness.

So when there was nothing else to be done, I headed to the allotment and took up the dahlias, now stunted by the first winter frosts. The tubers will go into dormancy, over-winter indoors, and then I’ll plant them out for a new life next spring.

Now it’s grey outside, hailing in fact. But there is always knowledge that spring will come. 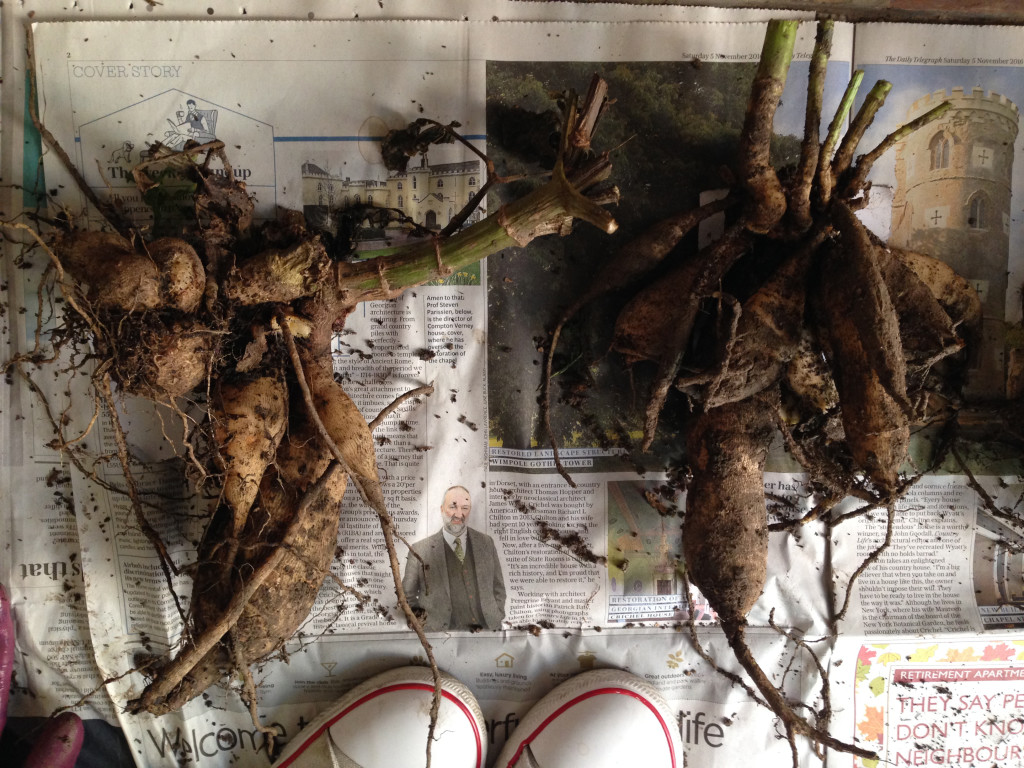 * These books are: Diary of a Provincial Lady by E.M.Delafield, which is a much, much funnier book than it sounds and worth a read; various novels and gardening literature by Vita Sackville West; and Country Matters and Four Hedges by the extraordinary Claire Leighton. Books on a similar theme (daily life in a time of political extreme) include Alice B. Toklas’ Murder in the Kitchen, which records her life with Gertrude Stein in France during World War One,  and the masterpiece, Honey from a Weed by Patience Gray, telling of life in some of the poorest villages of post-war Europe.