‘Tis the weekend to deck the halls. In Lichfield they are taking this to extremes, with this extraordinary installation of paper angels in the Cathedral. They hang from the vaulted ceiling as if tumbling from the heavens. Simple but very effective. 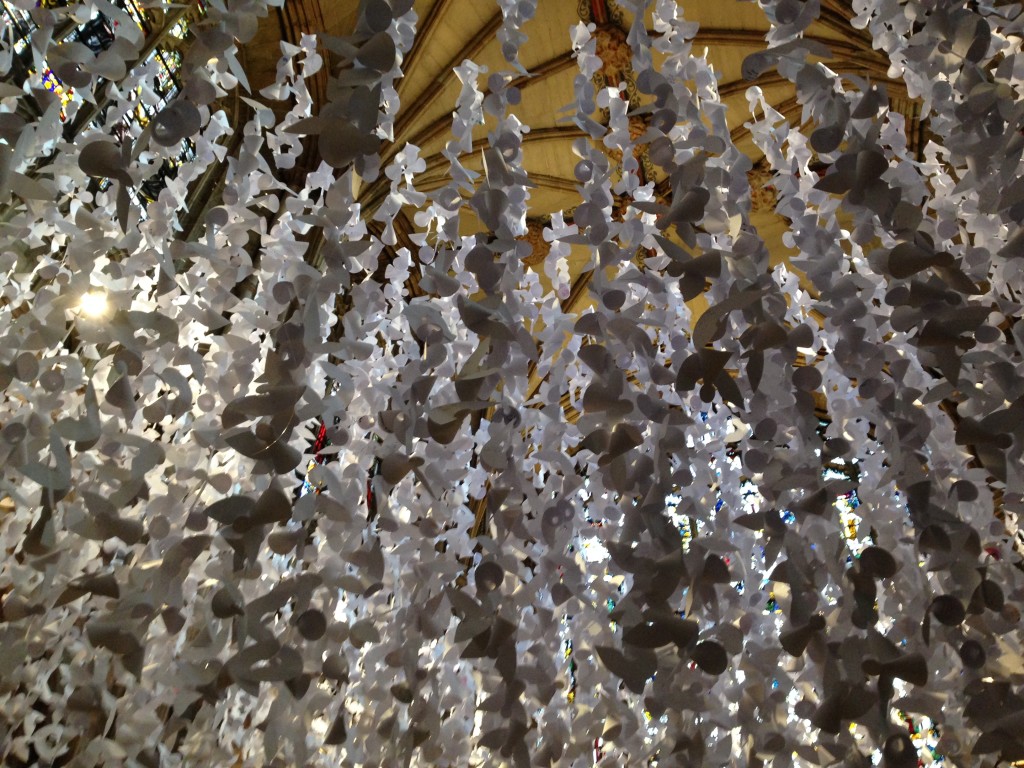 In the more simple surroundings of Bearwood, someone’s been getting all hygge… At the advanced age of 2-and-a-half, Gertie is finally appreciating the joy of a naked flame. (Yes I know it’s gas and therefore not a real fire, but it’ll do.) 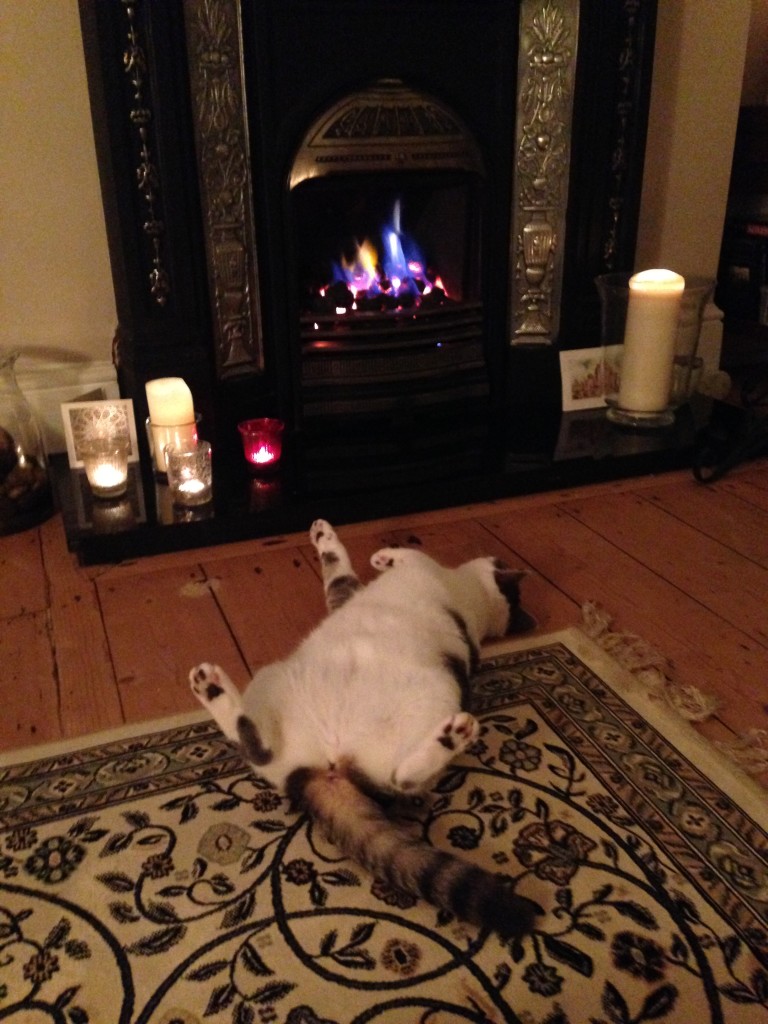 These short, dark days demand warming food. I love to have stews, soups and pies squirreled away in the freezer, ready for a quick nourishing supper or lunch. I say ‘quick’, but that’s a misnomer. They’re quick to defrost, but certainly not to cook in the first place. And so I present oxtail rendang, a country-girl take on the traditional Malay classic. This takes hours to cook – even longer if you decide to use fresh coconut, as I did – but it’s simple enough and packs a punch of flavour on a cold Monday evening.

Rendang is usually made with braising steak (the Rick Stein recipe that I adapted recommends blade or chuck) but I had some oxtail in the freezer and an idea that its rich, gelatinous quality would suit this slow-cooked creamy coconut curry well. I was correct! This rendang is aromatic with lemongrass, lime leaves, chillies and cinnamon, but the most important ingredient is the coconut. It’s best to make this a day ahead so that it’s completely cold when you flake the meat from the bones – plus it tastes better this way. Make double, freeze the leftovers, and there’s a good meal waiting patiently for when it’s needed. 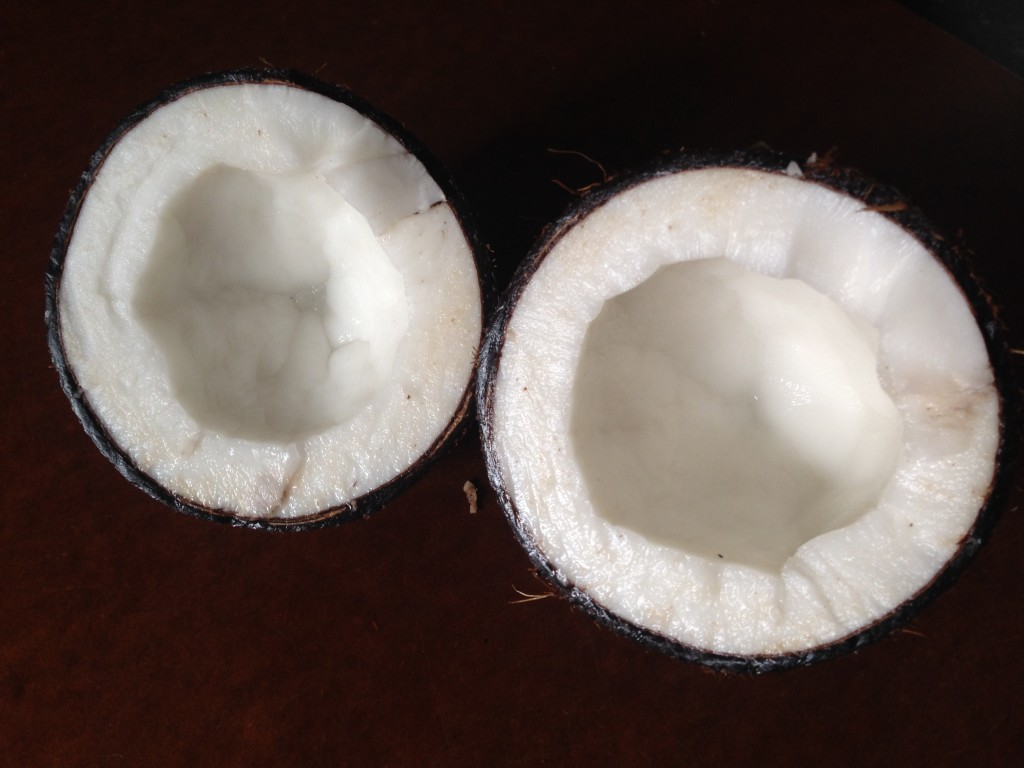 Crack yourself a coconut

So dear reader, first, crack a coconut*. You can do this the hard way as I did, with a pruning saw (yes really), or the easy way, as shown on this video. Once you’re in, remove the flesh and pulse it to a pebbly-powder in the food processor.  *Or you could just buy some ready-prepared fresh coconut from the supermarket, your choice. I have tried this recipe with desiccated coconut and it’s not as good, so go fresh if you can. 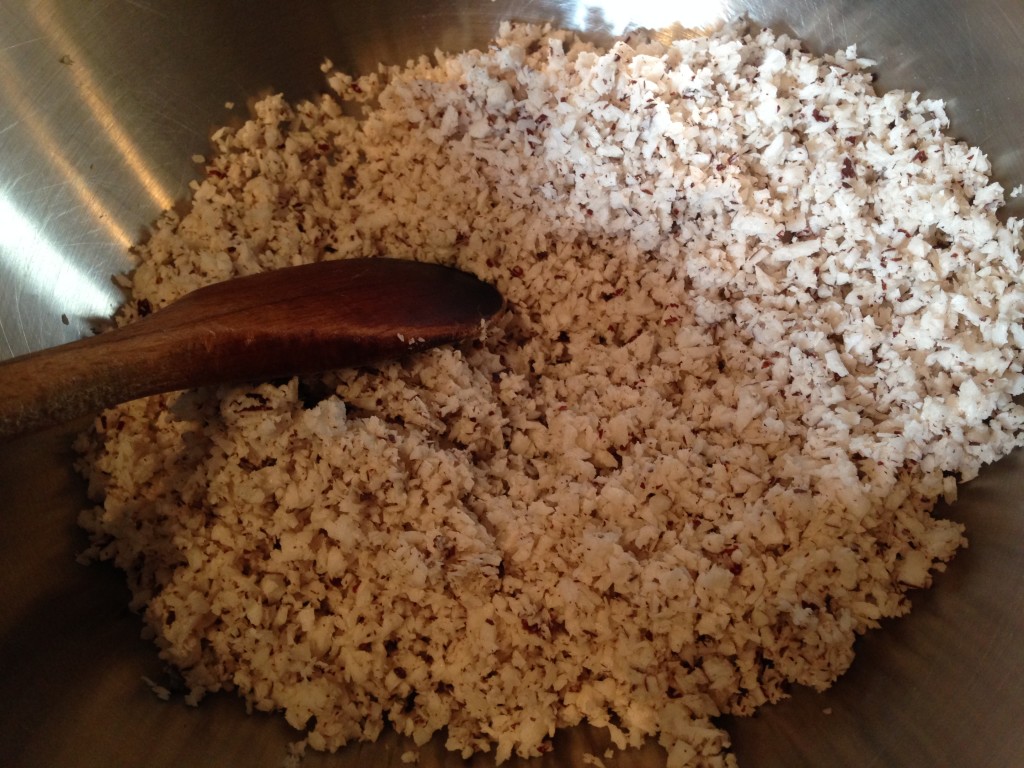 Pulse the coconut to a pebbly-powder in the food processor

The coconut is the basis for our curry paste. Measure out 50g blitzed coconut (freeze any leftovers) and toast in a dry frying pan until golden all over. Tip the now-aromatic coconut back into the food processor along with 4 dried Kashmiri chillies, a knob of fresh peeled ginger, 3 cloves of garlic, 1 small onion and 3 fresh red chillies. Blitz for a minute or two until finely chopped. In a pestle and mortar, bash 1 tbsp coriander seeds with 1/2 tsp cumin seeds until powdery, then add to the food processor with 1/2 tsp turmeric. Blitz the lot with 100ml or so of water until it reaches a smooth paste – you may need to keep the machine running for several minutes. 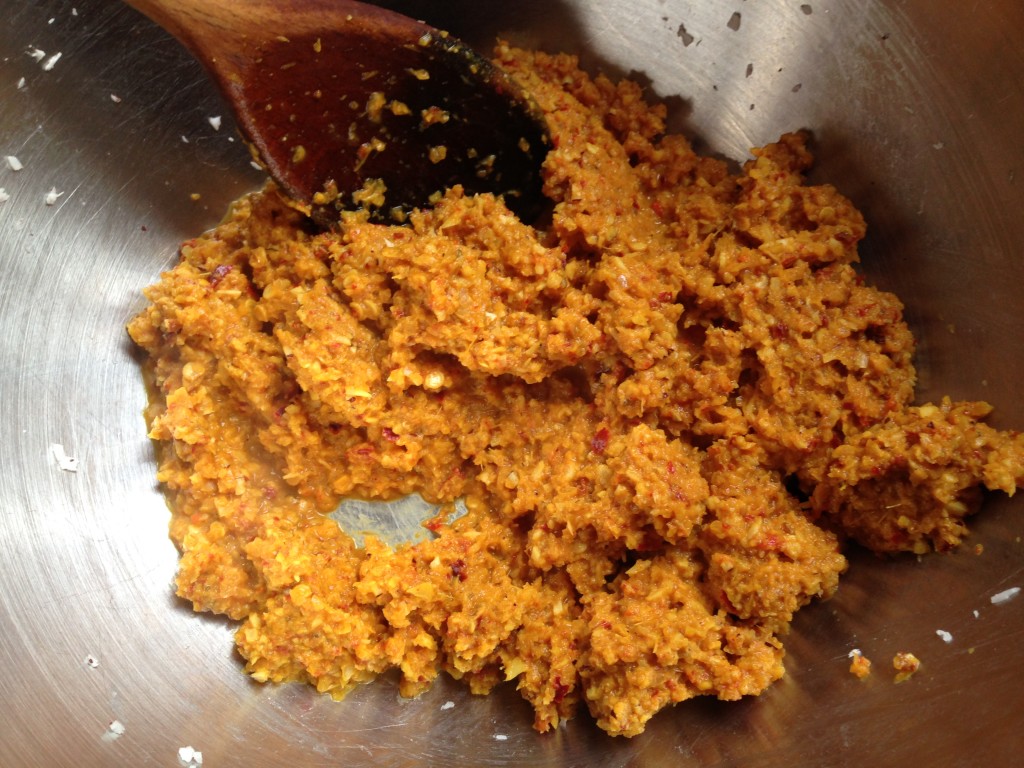 Blitz the coconut with chillies, spice, garlic, chilli and onion to make the spice paste

That’s the hard bit done and we can get on with assembly! Brown your beef pieces in frying pan with a little oil. I used four pieces of oxtail that together weighed about 1.5kg, but you could use regular braising steak if preferred. When brown, remove the beef to a pot along with two cinnamon sticks, three bashed stalks of lemongrass and 12 kaffir lime leaves. You can buy frozen lime leaves from specialist Asian grocers and they’re waaaay better than the dried ones. Brown the oxtail, then pop in a pot along with lime leaves, cinnamon sticks and lemongrass

To make the sauce, heat a little oil in a frying pan, then add the curry paste and cook over a medium heat for about 10 minutes, until most of the water has evaporated. You’ll know this because the ‘hissing’ noise of the cooking paste will begin to sound different. Once you’re there, add two cans of coconut milk (800ml), 1 dsp of tamarind water (I use the ready-made kind) and 1 tbsp palm sugar or dark brown sugar and a pinch of salt. Bring to a simmer then add the sauce to the meat. 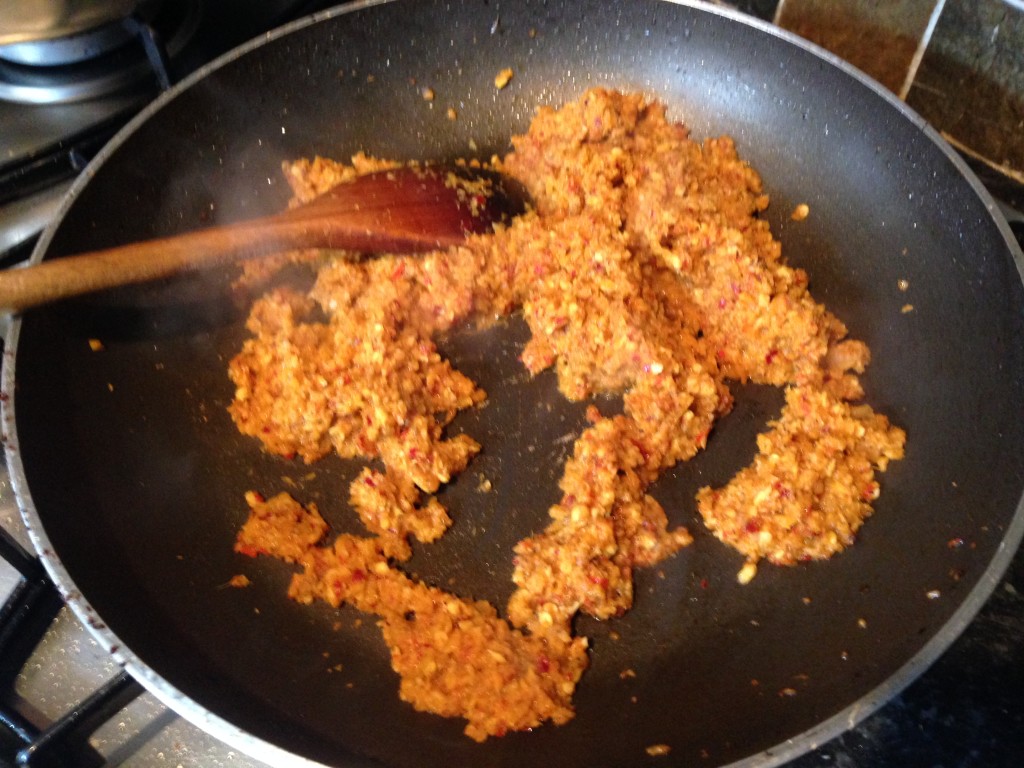 Cook the spice paste over a medium heat… 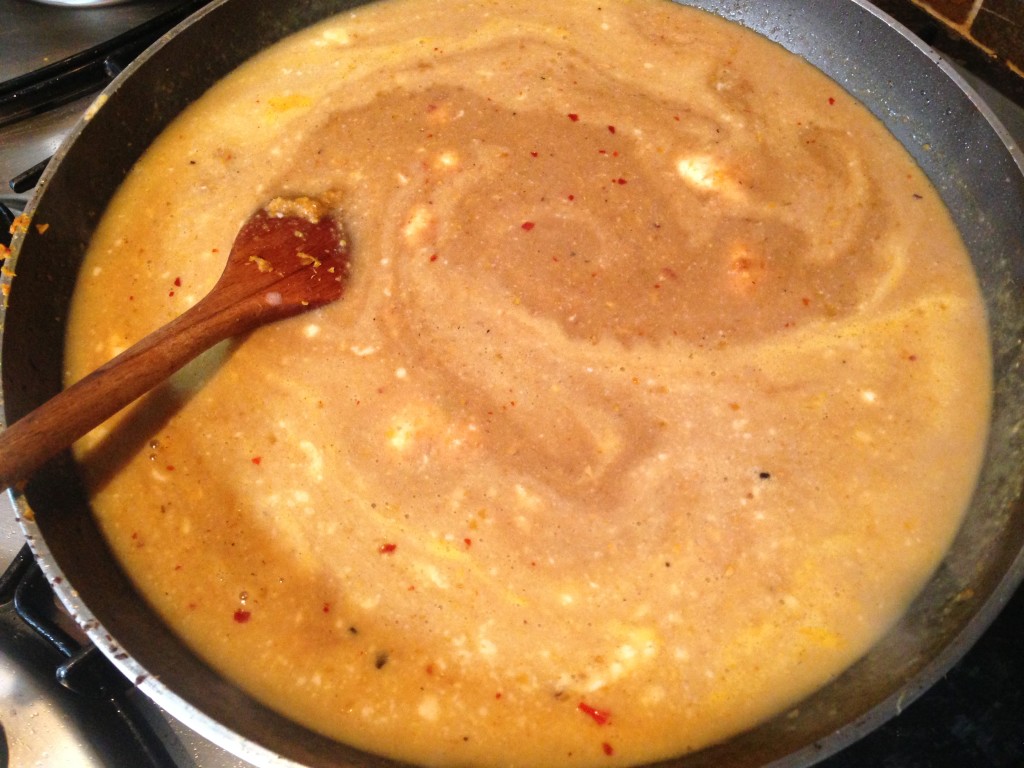 …add the coconut milk and bring to a simmer 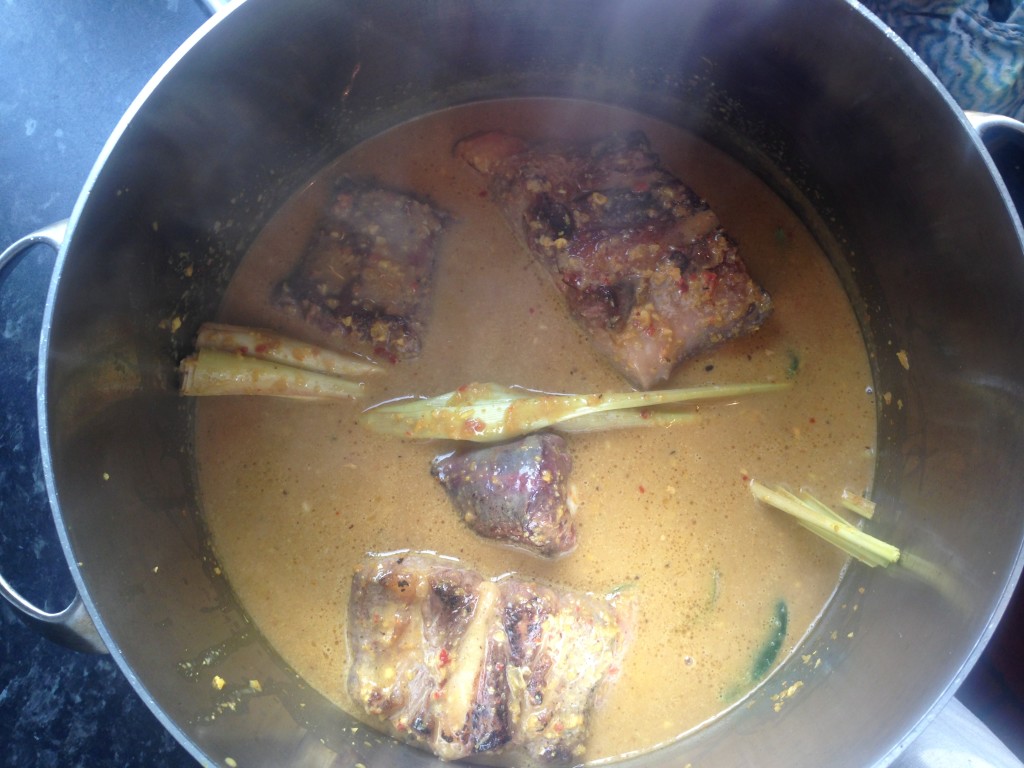 Add the sauce to the meat, along with a dollop of tamarind and sugar, then cook for three or more hours

The curry now needs cooking for a very long time. You can do this on the hob, but I always prefer to use the oven – 3 hours at 120c should do it, but longer wouldn’t hurt. Remove the lid for the last thirty minutes of cooking to reduce the sauce slightly. Once the meat is flaking from the bones, remove from the heat and leave the whole lot to cool.

At this point we have a photo fail, as it’s dark at 4pm and therefore impossible to take useful images without expensive kit that I don’t possess. So you’ll have to take my word for it: the next step is to remove the meat from the bones, and the only way to do this is with your fingers! So remove every scrap of meat that you can and add it back to the sauce. Check for seasoning, reheat and serve. 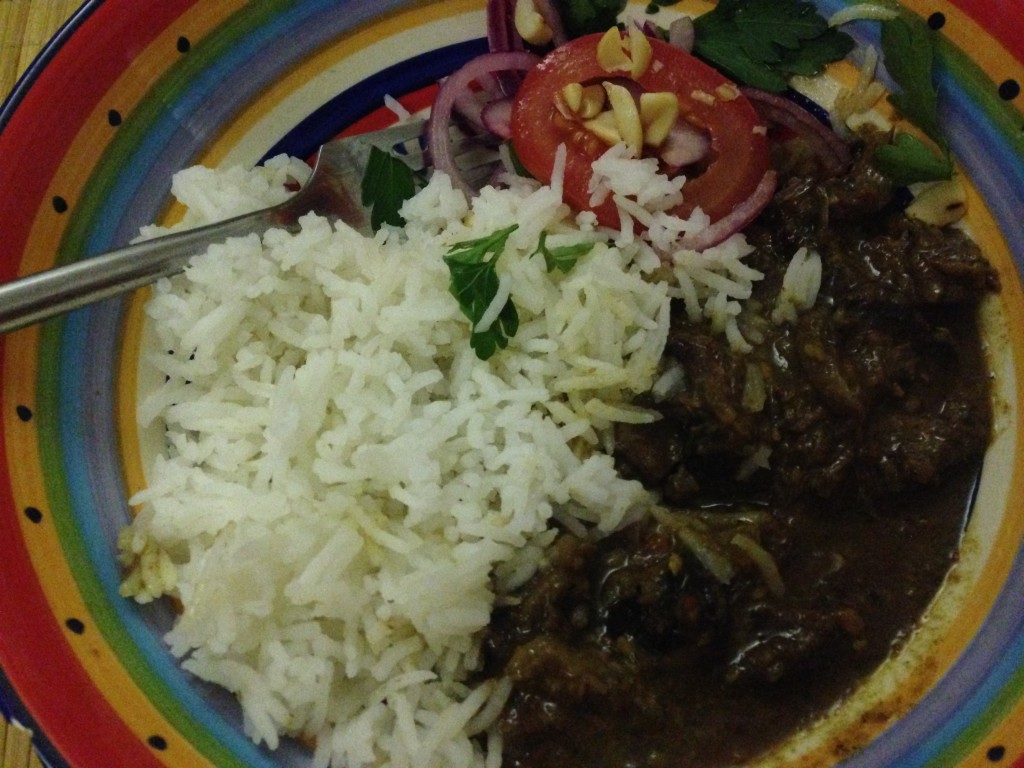 BAD PICTURE APOLOGY. Shred the meat from the bones, add back to the sauce, and serve up with rice and sides.

As well as rice, I think this rendang needs some good sides to go with it. I usually make a little plate of  toasted peanuts, sliced red onions that I’ve tossed with rice vinegar, and a few slices of tomato and cucumber. You have a dinner that’s warm, vaguely familiar (it is a beef stew after all) but deliciously exotic for winter nights.

Brown the meat in a little oil until browned on all sides, then place in a pot with the lemongrass, lime leaves and cinnamon.

Heat a little more oil in the frying pan and cook the curry paste for about 10 minutes, until the water evaporates. Add the coconut milk, tamarind, sugar and salt, bring to a simmer then pour over the meat.

Cook at 120c for at least three hours, until meat is tender. Leave the lid off the meat for the last half hour to thicken the sauce. When cooked, remove the oxtail from the curry and flake the meat from the bones. Add the meat back to the sauce, reheat and serve.

One thought on “Oxtail rendang”