I found the courage on Sunday to head into the chill and take a look at the mid-winter allotment. I’m aware that it doesn’t sound remotely brave to go look at one’s land, but MY GOD that padlock gets cold in January. One touch and you are in fear of frostbite. Well, it’s all still there: the so-called ‘hardy’ chicories have not survived the frosts, and all of the remaining over-wintering chard and greens have been gnawed to their ribs by the pigeons. The raspberries are ready for their winter chop-back but that can wait for another day, when it’s a little warmer. As long as the waterbutts are frozen over, it’s too cold for any serious grafting. 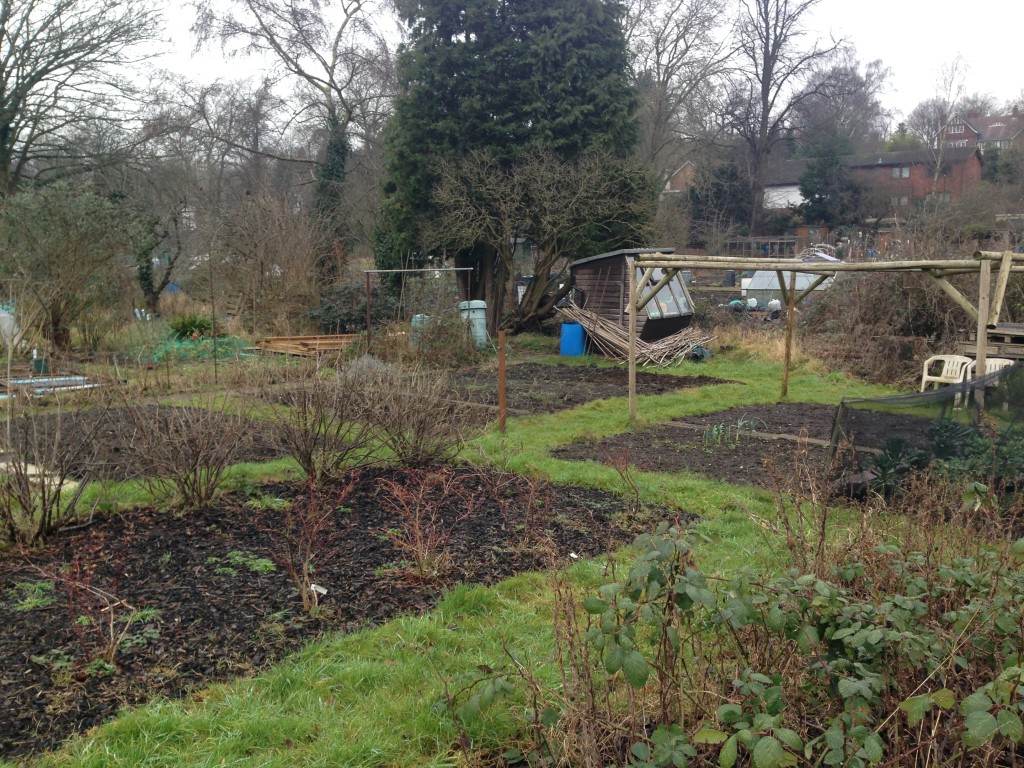 January on the allotment 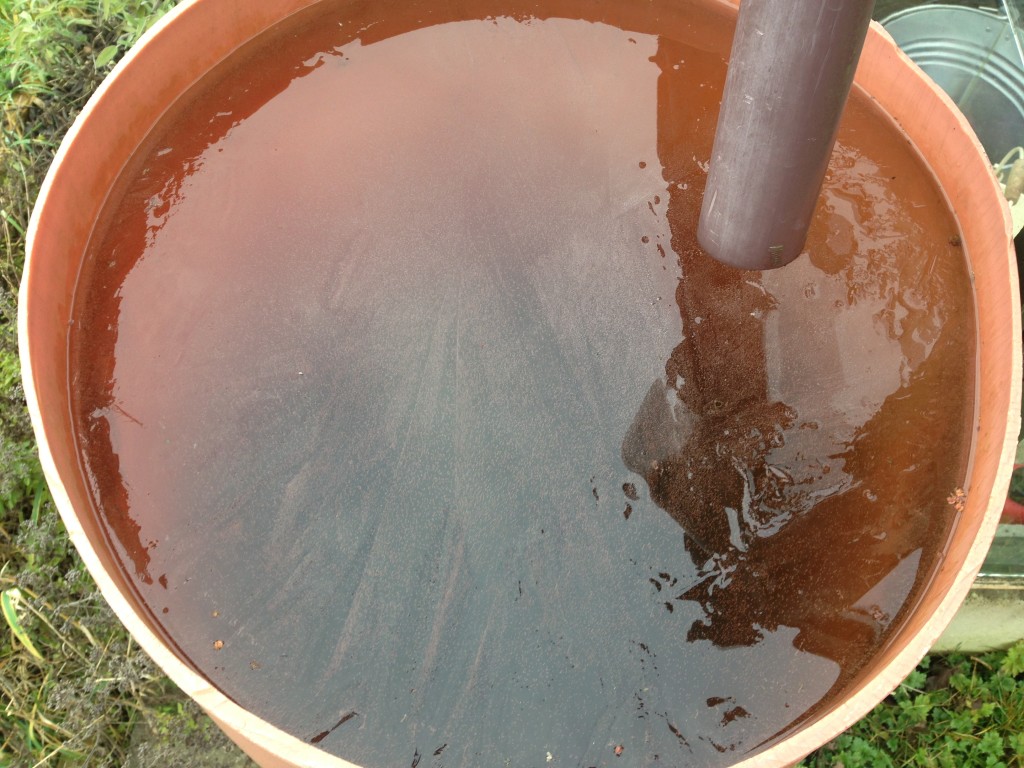 Last week we had friends for dinner and – we being 21st century metropolitans – this included 1 vegetarian, 1 nut allergy, 1 pregnant woman, 1 person-on-a-diet and 2 ‘normals’. There’s only one option in situations such as this: curry (the best vegetarian food on earth, in my view) & buffet (so everyone can help themselves). That may read like two options so I’ll write it again: CURRY BUFFET.

I whisked up a sizeable portion of Bengali egg curry, a batch of tandoori-style chicken, carrot salad and a pile of palak paneer. Add a few bags of samosa, pakora and chapati from the wonderful Chandigarh’s on Bearwood Road, and we had a good feed.

The palak paneer recipe is yet another that comes from my friend Tune, and is a great staple for curry nights. It’s a simple dish of spiced spinach cooked down with chunks of paneer (fresh cheese) and finished with cream or yoghurt. Incidentally, I always thought that saag paneer referred to the spinach-with-cheese combo but Tune put me right on that front: palak means spinach, whilst saag refers to general greens. Excellent knowledge from my Indian kitchen guru.

In summer I would use fresh spinach from the allotment for this but it’s January, so frozen will do just fine. To feed 6 as part of a buffet, take 8 ‘lumps’ of frozen spinach and leave at room temperature to defrost for an hour or two. If using fresh, take a large colander-full of leaves, blanch in boiling water and drain incredibly well. 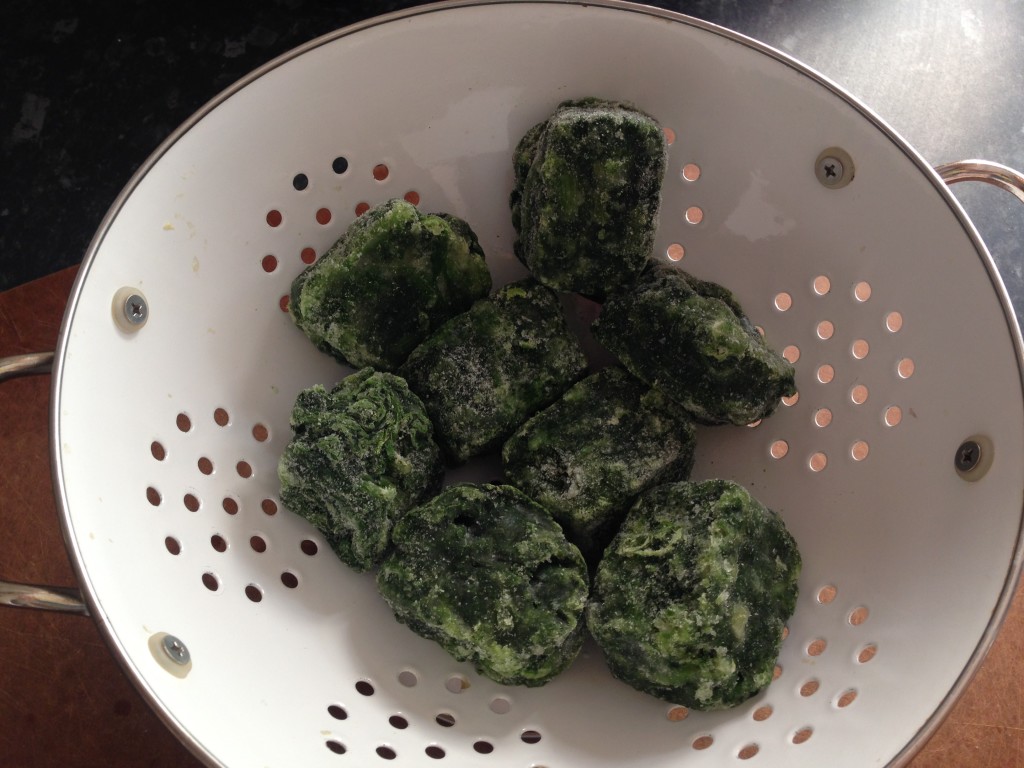 Frozen spinach is fine for this dish

To make the curry base, whizz up ginger and garlic in a mini food processor, then soften it over a low heat in ghee or vegetable oil with a large teaspoon of ground cumin. Once it’s fragrant, tip in the spinach – it doesn’t matter if it’s still a little frozen. Pop the lid on and cook down for ten minutes or so, until the spinach turns a shade darker in colour. 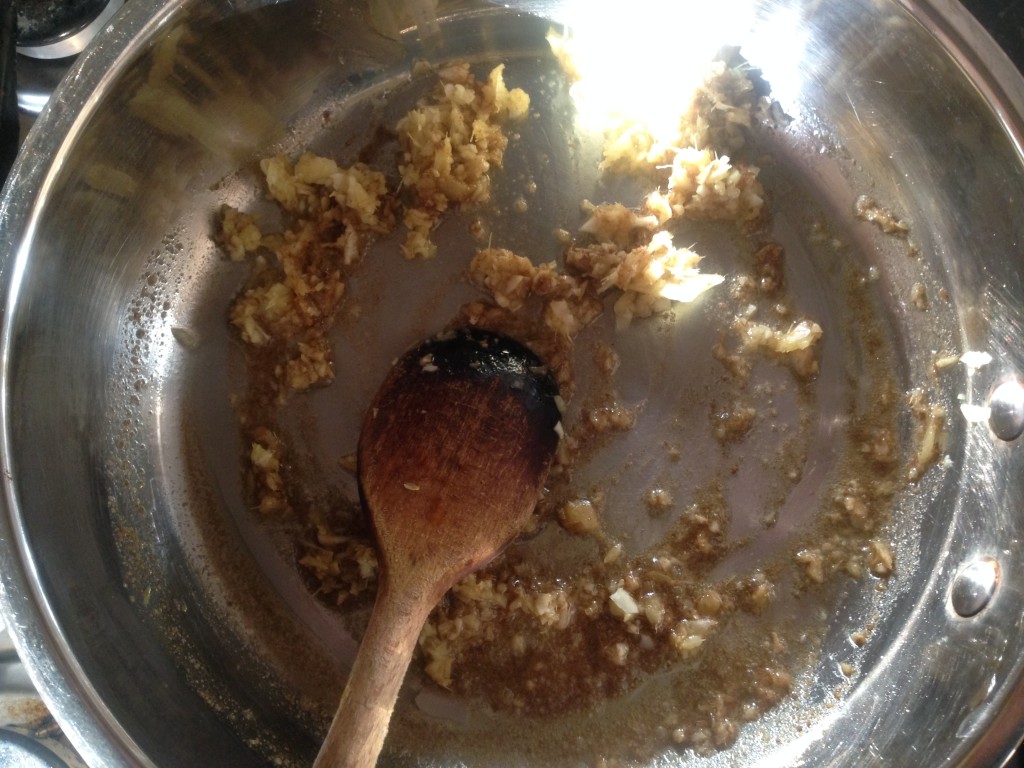 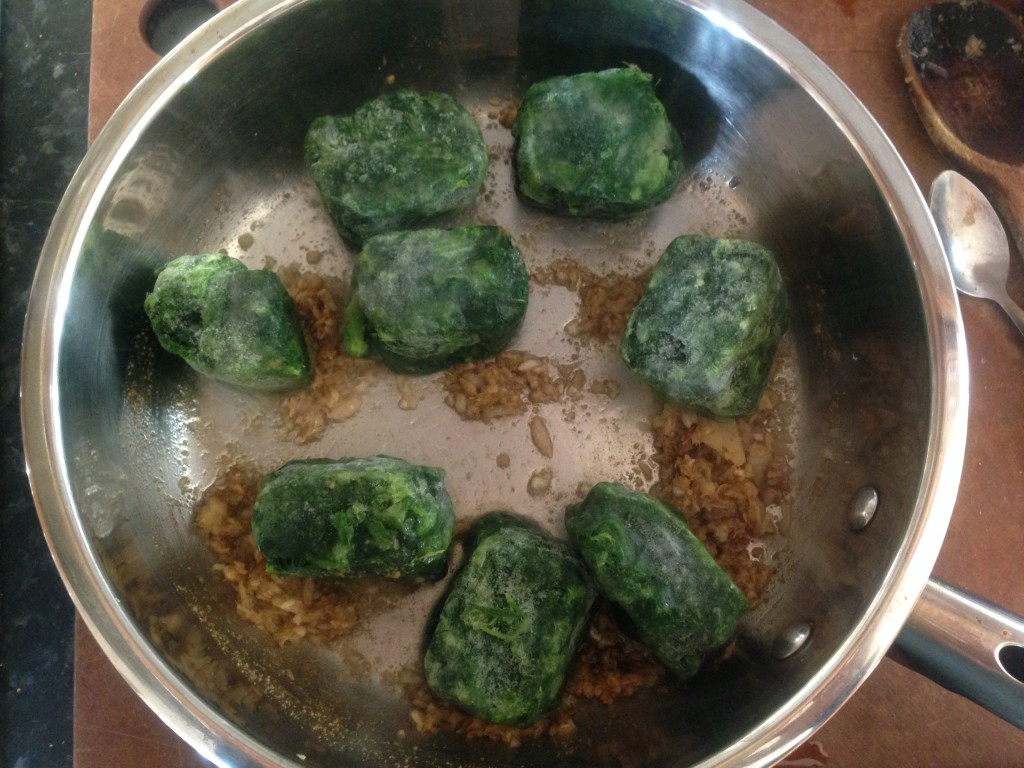 Add the spinach and cook down for ten minutes

After ten minutes, tip in half a tin of chopped tomatoes (or three large, fresh tomatoes, chopped) with a good pinch of salt, pop the lid back on and cook for another ten minutes. 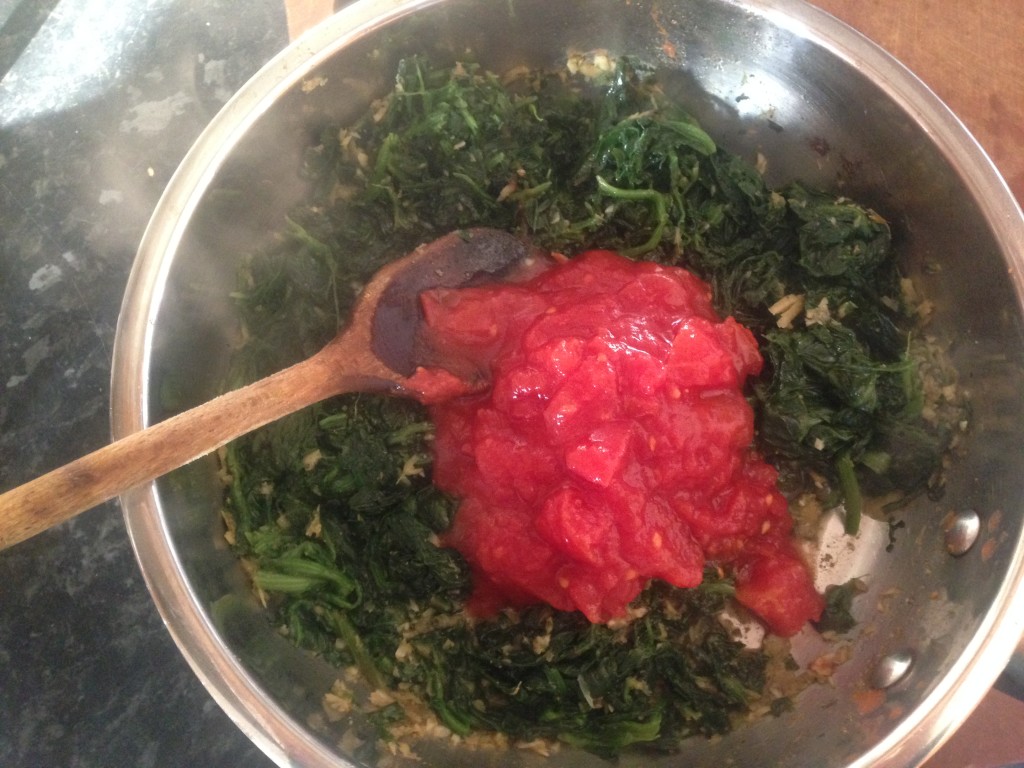 When it’s all cooked down, add a dollop of cream or yoghurt and stir through. The spinach can be kept like this (i.e. chunky) or for a more traditional finish, take your hand blender and blitz it to a puree. 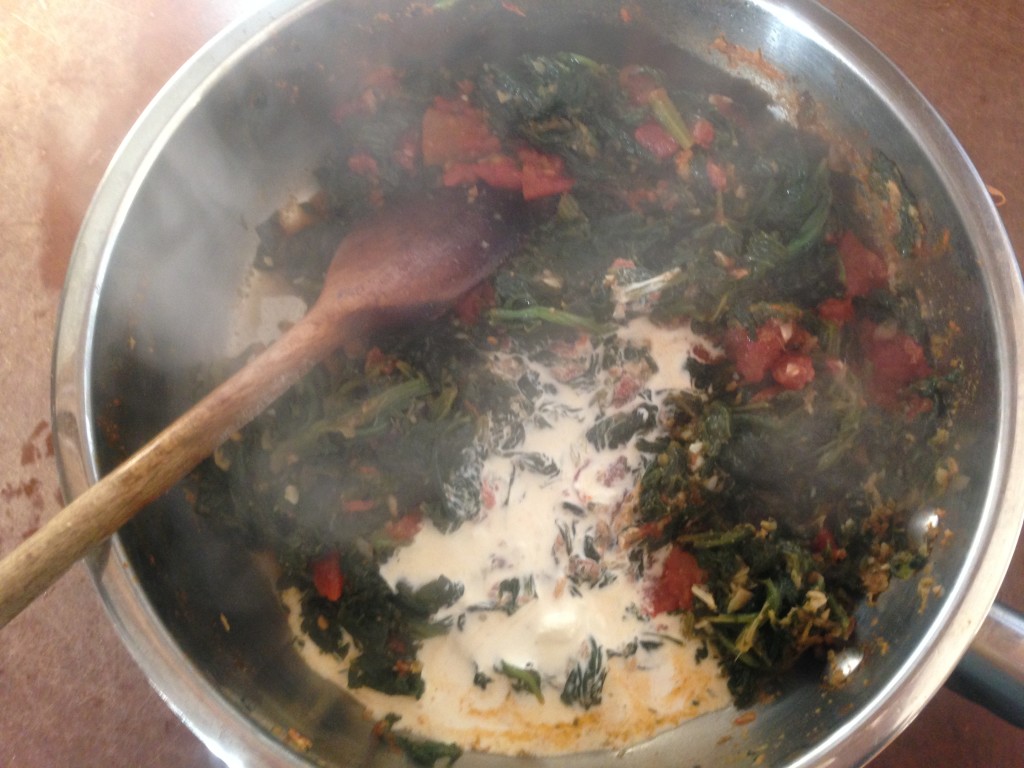 Then add a dollop of cream or yoghurt

If you prefer a smooth texture, blitz with a hand blender

Meanwhile, take a block of paneer, cube it, then brown in a little oil for a few seconds until golden. Add the paneer to the spinach with a sprinkle of garam masala and ta da – palak paneer is yours. 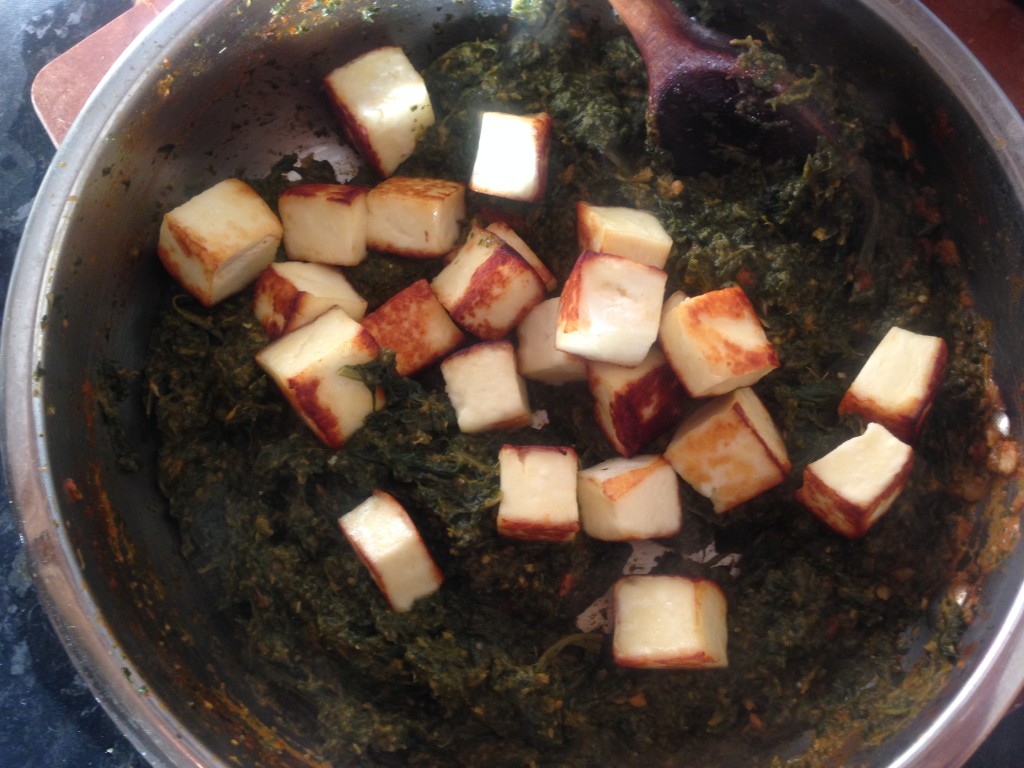 Add browned paneer to the spinach, heat through then serve

Eagle-eyed readers will note that there is no chilli in this, and no gluten for that matter, so it’s light and easy on the digestive system. I also suspect that it might be disturbingly good for you! Serve with rice and yoghurt for a weekday veggie dinner, or as a side as part of a more generous curry feast.

8 ‘cubes’ of frozen spinach, or large colander of fresh spinach

1 thumb-sized piece of ginger (or more, to taste)

Cream or yoghurt, to finish

If using fresh spinach, blanch it in boiling water, drain then squeeze until it is really, really dry. If using frozen, leave to defrost at room temperature for a few hours.

Blitz the ginger and garlic in a food processor, or grate it on a fine-grater, to make a paste.

In a lidded frying pan, warm the ghee or oil and fry the ginger-garlic paste over a low heat for a minute until softened. Add the cumin and cook for a further 30 seconds. Tip in the spinach with a pinch of salt, pop the lid on and cook down gently for ten minutes. Stir in the tomatoes and cook for another ten minutes. Taste for seasoning and add a dollop of cream or yoghurt to taste. Use a stick blender to blitz the vegetables to a thick puree.