Autumn is in the air. It’s not yet 7am but I’ve been awake for hours, it being impossible to sleep with a child kicking against the lungs as if pushing off from the edge of a swimming pool. Outside is that light mist of early autumn; warm, damp, grey. (Although some of the greyness might be related to our filthy windows.)

Every year I note that autumn really begins in August, and every year it still come as a surprise. For several seasons we’ve had a wet, disappointing late summer, then come September things perk up with weeks of warm sunshine. I don’t mind this in the slightest, for it means GREAT things for my pumpkins. This year I’ve managed, with no effort on my part, to grow at least five whoppers that will hopefully ripen into jazzy stripes of orange and green. 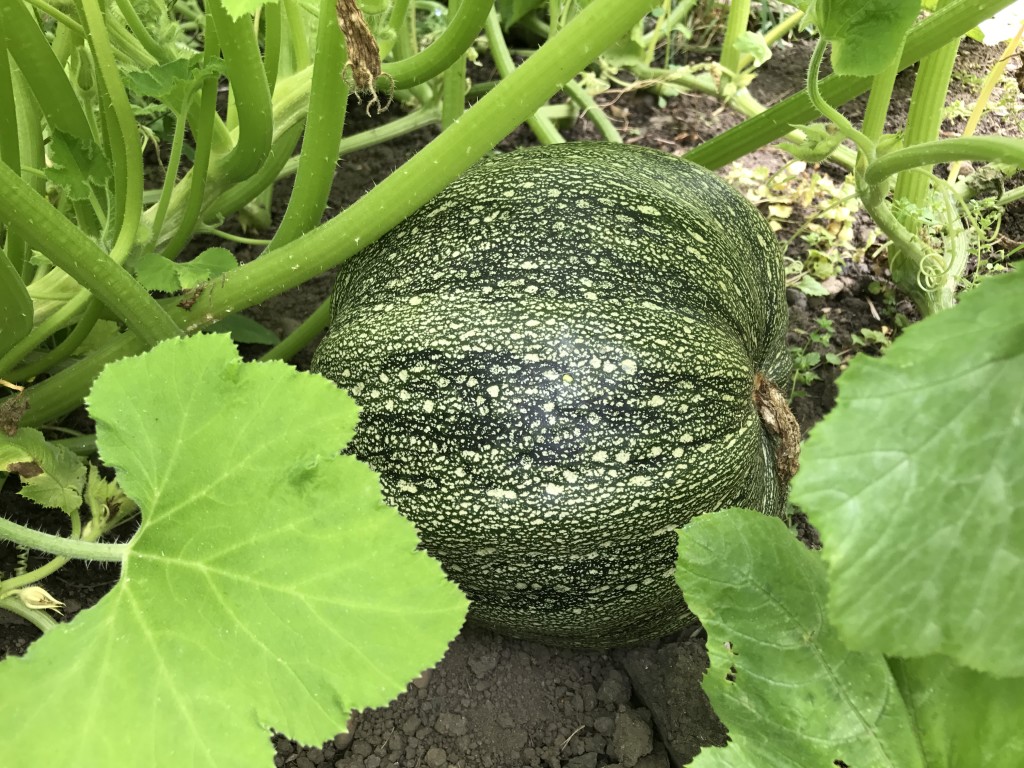 We’ve about 5 of these, as big as a basketball. Hopefully they’ll turn into jazzy orange and green stripes.

Late summer is marked with shades of red and orange. The nasturtiums are rampant, climbing up the sweet pea netting better than the sweet peas ever did. They give welcome colour to salads but are also covered in the happy hum of pollinating insects. Over in the raspberry patch, the gentle beginning has given way to abundance – and the fruit is delicious, sweet and tart and floral and luscious. At this rate, we’re going to need a bigger freezer. 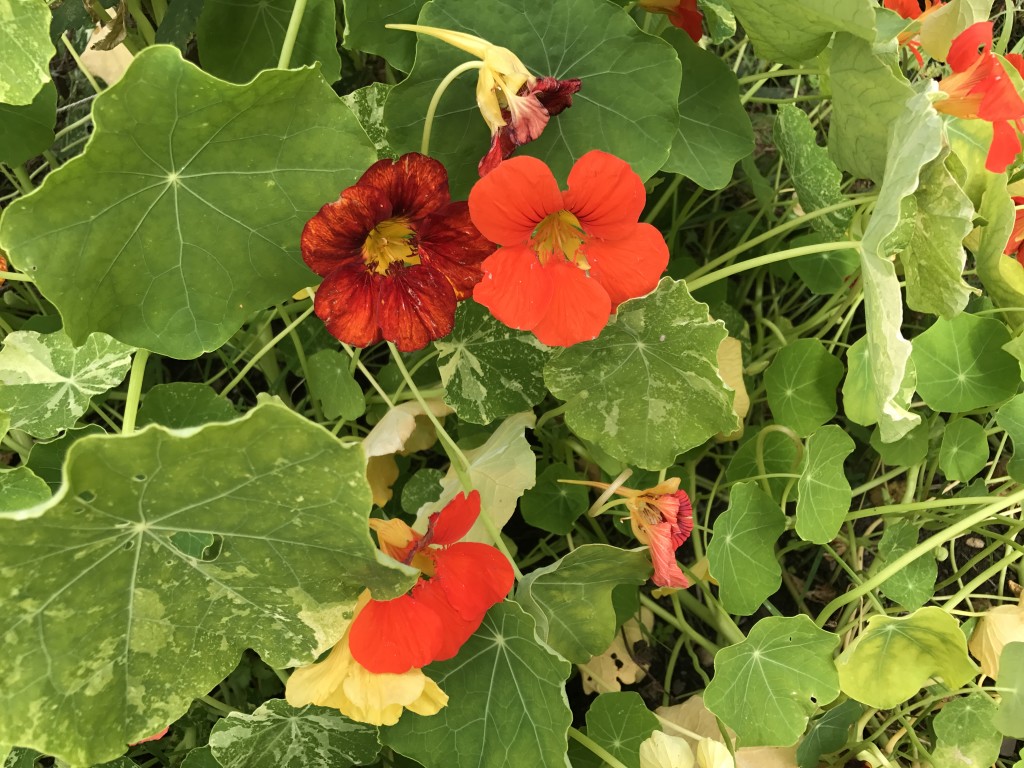 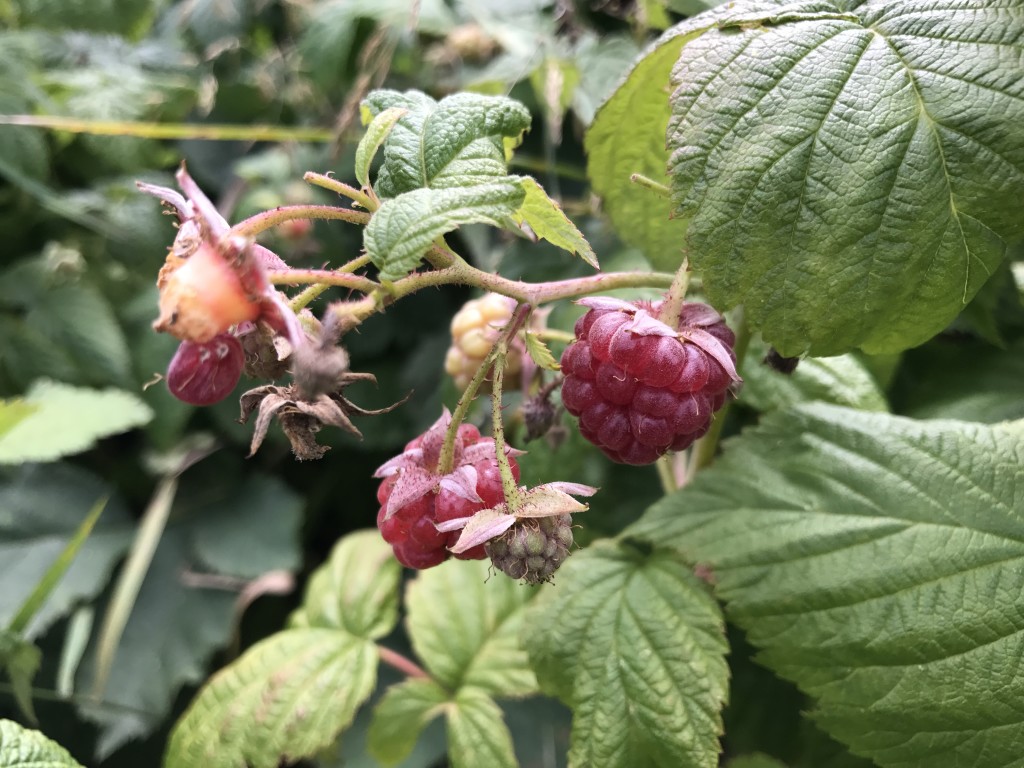 The raspberry harvest has started in earnest…we’re going to need a bigger freezer.

Joy of joy, the sunflower harvest has begun! This year we have mainly bright yellow and dark brown heads, jolly as ever. I always think it is a miracle that a seed so small can produce plants as epic as this. 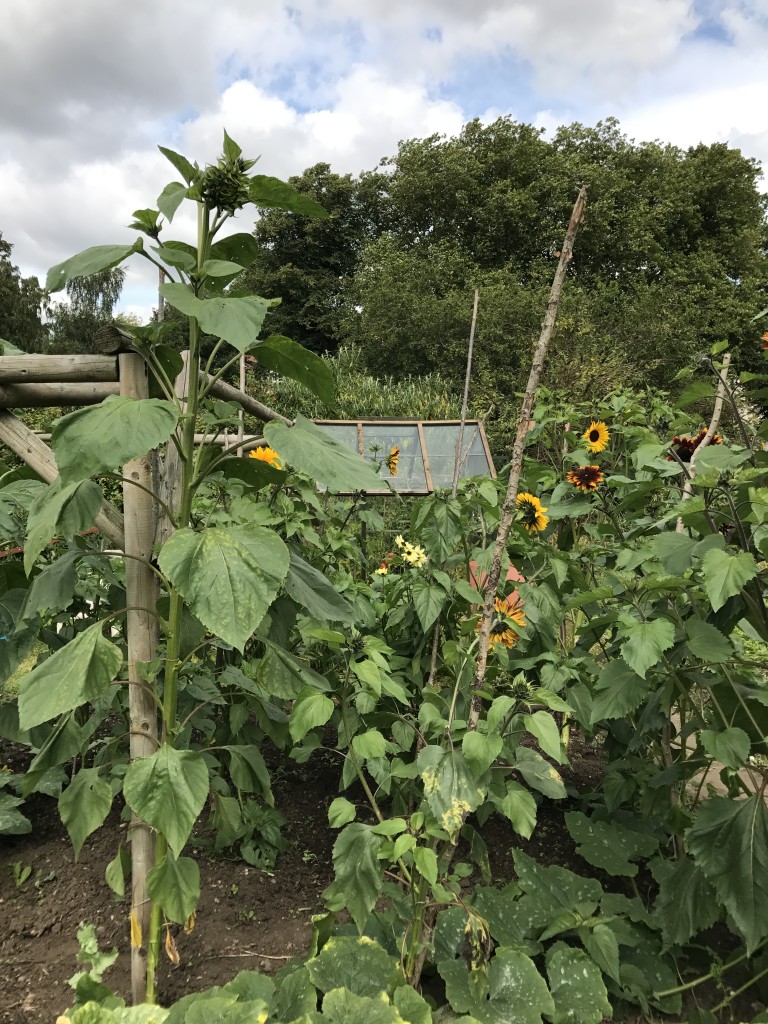 And lo! The sunflowers beat the 7-foot mark!

But the stalwart of the moment is the runner bean. I’ve blogged before that our beans have not done well this year; they had a good sulk at being parched during May and June. But the runners are doing OK and on balance, I’d rather have a small crop that lasts a long time than be inundated with foot-long beans that are as tough as shoe leather. I pick them young, maybe 15cm long, and many of them have been munched raw, straight from the plant, whilst I wander up to the water butt. (Incidentally raw runner beans are delicious, as written about far more eloquently than I could manage in this article by Stephen Harris in the Telegraph: http://www.telegraph.co.uk/food-and-drink/recipes/transform-runner-beans-summer-just-slice-add-salt-lime/) 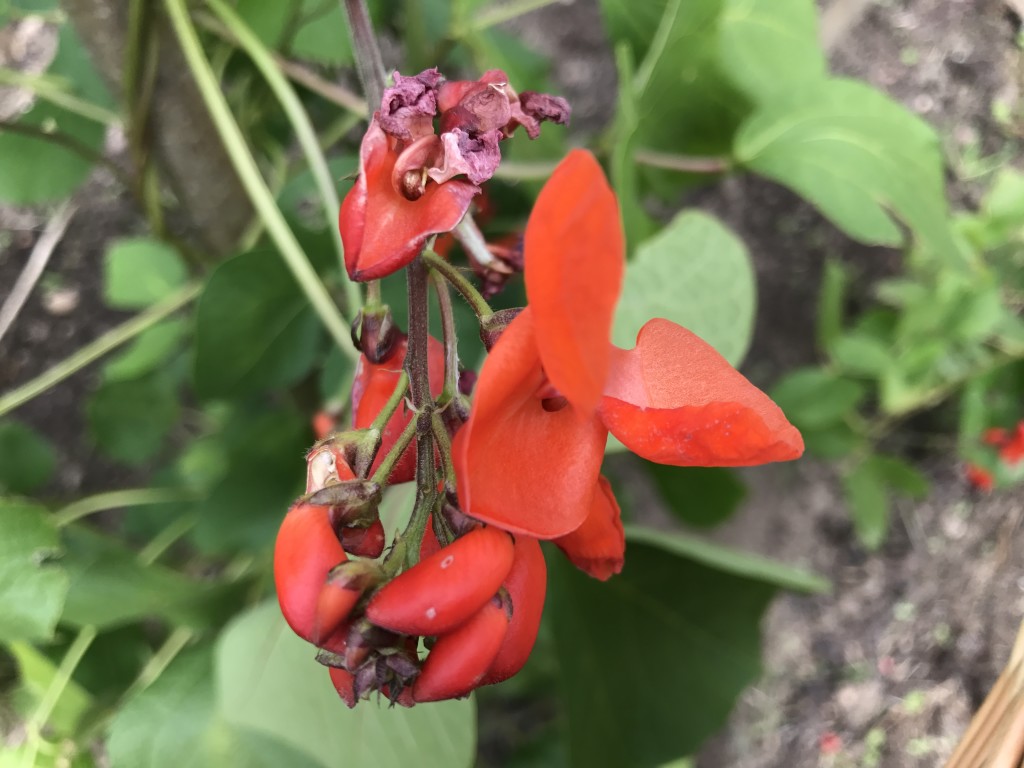 This week has seen the first of our, admittedly modest, tomato harvest. I try hard with my toms and they never do brilliantly, but I will always persevere because homegrown tomatoes are The Best Thing Ever. Put some freshly picked runners with some home-grown tomatoes, and you have the makings of a perfect late summer supper. 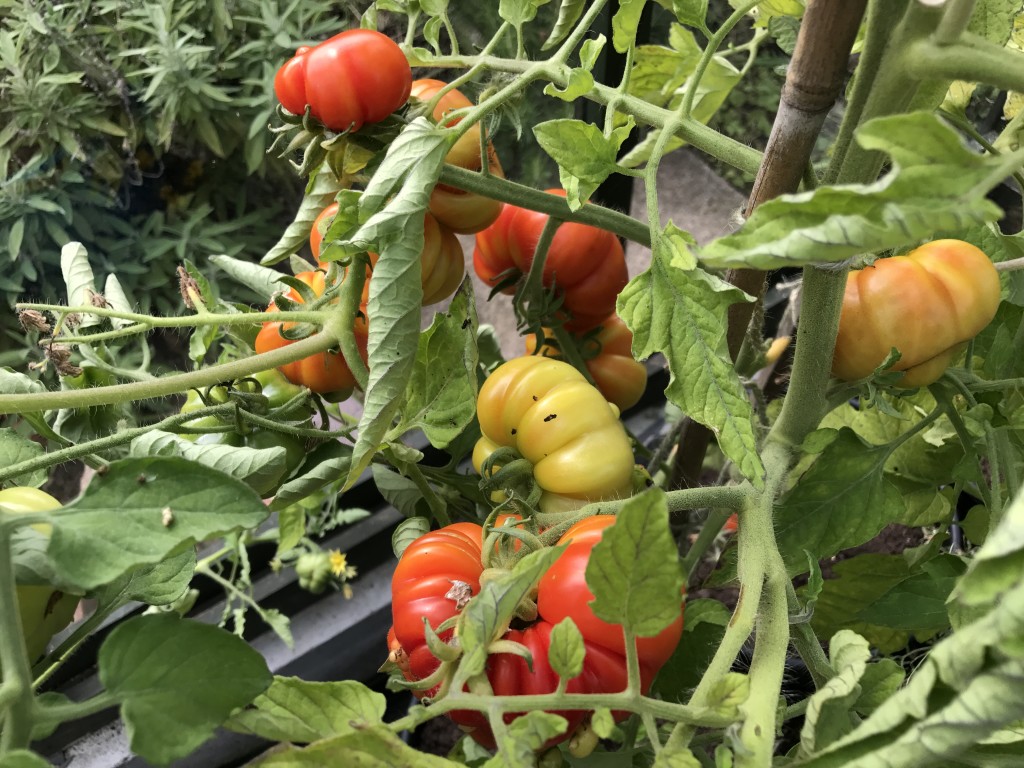 First (modest) haul of tomatoes including the ugly but wonderful Fiorentina 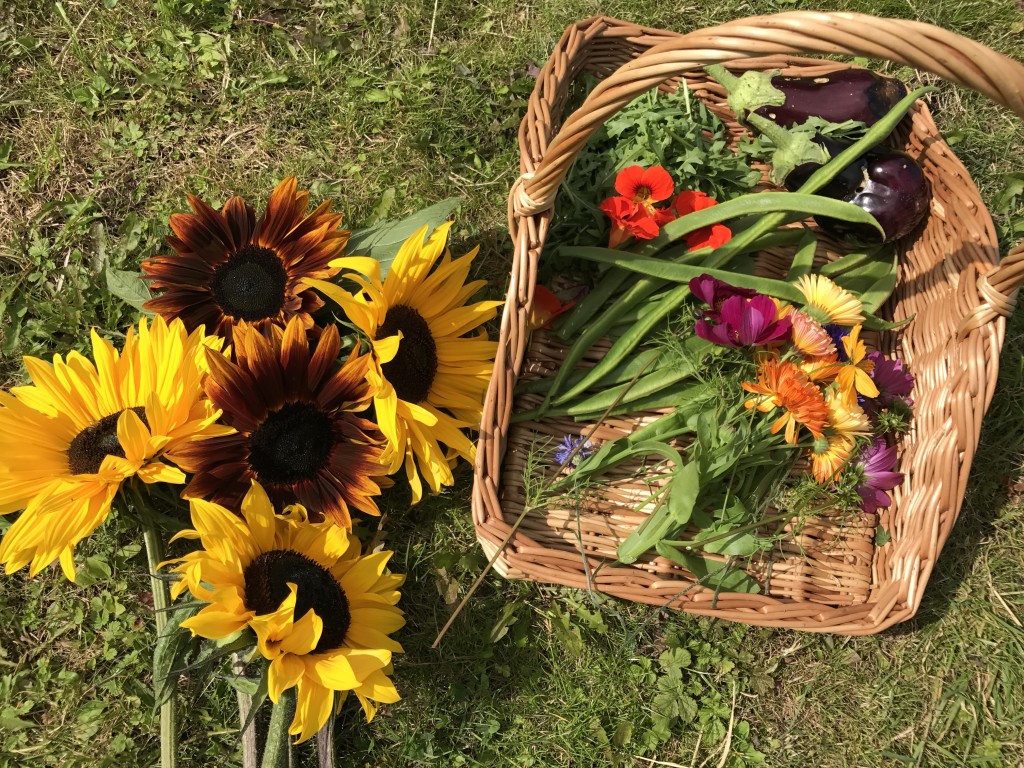 I first came across this idea in one of the River Cottage books and, interest piqued, did a bit of research. Turns out that the fresh-green-beans-braised-with-fresh-tomatoes theme can be found in most of my French cookbooks and is a classic dish. This is a great way of serving up runner or stick beans; use fresh, ripe tomatoes if you can and do not stint with either the olive oil or the garlic. The beans lose their vivid green colour, but so be it.

At least two fat cloves of garlic, more if you like it garlicky

About 1kg fresh tomatoes, chopped. I leave the skins on but you can remove them if you prefer. You could also use a can of tomatoes if the fresh ones are no good.

Put a good glug of oil into a deep frying pan or casserole, and soften the onion over a medium heat. Add the garlic and fry for a scant few seconds, until the aroma rises, then quickly add the beans and tomatoes. If you have watery tomatoes you may not need to add any liquid, but if the mixture looks dry then add a few tablespoons of water. Season well with salt and pepper, pop the lid on, and leave to putter on a medium heat for 30 minutes. Stir every now and then and add a drop more water if it looks dry. Serve when the beans are tender.

This is great on its own with hunks of bread but can also be an accompaniment to sausages, chops and fish.