Summer comes late to a Birmingham allotment, the first flowers not really blooming until June. They are white, pale and gentle: cosmos, foxglove, sweet-pea, forget-me-not. Then the season slips to autumn and WHAM BAM! Colour is everywhere! The sunflowers blaze and the blueberries turn a majestic russet; there are golden tomatoes, green peppers, red raspberries and purple beans. Not to be outdone, the artichoke still lures drunk bees to its violet spikes. 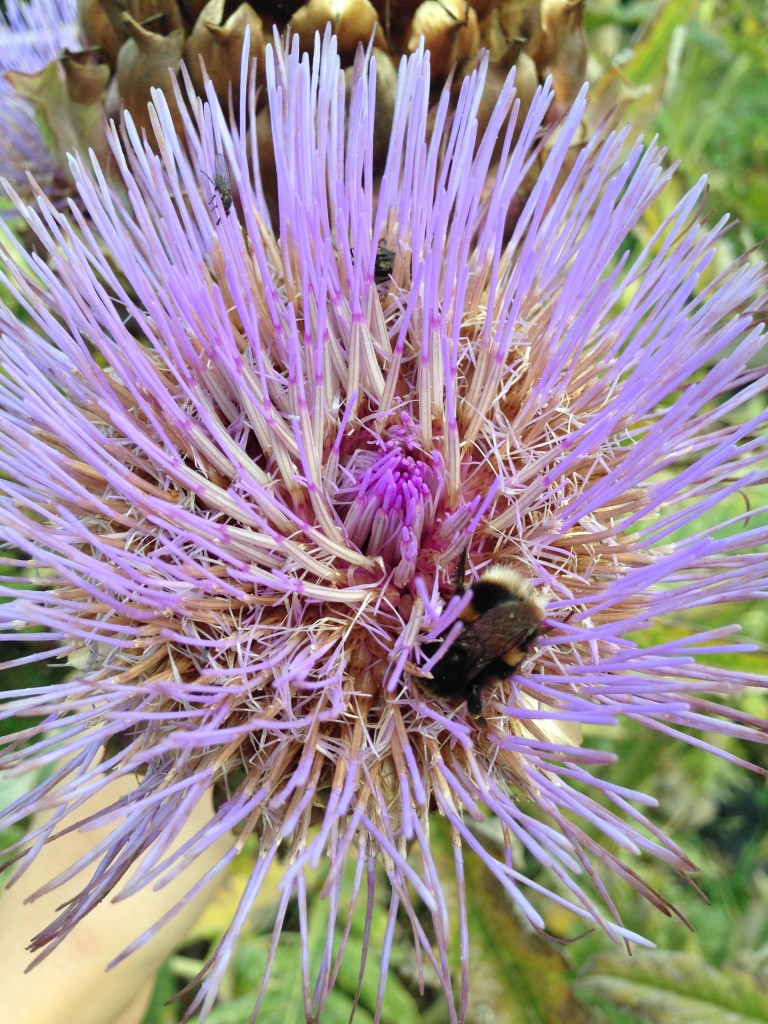 There are still drunk bees on the artichoke flowers

The colours of the autumn flowers work together incredibly well, but it’s due to luck rather than judgment. The yellow, red and orange dahlias contrast against the peach calendula, in turn providing foil for the sunflowers. 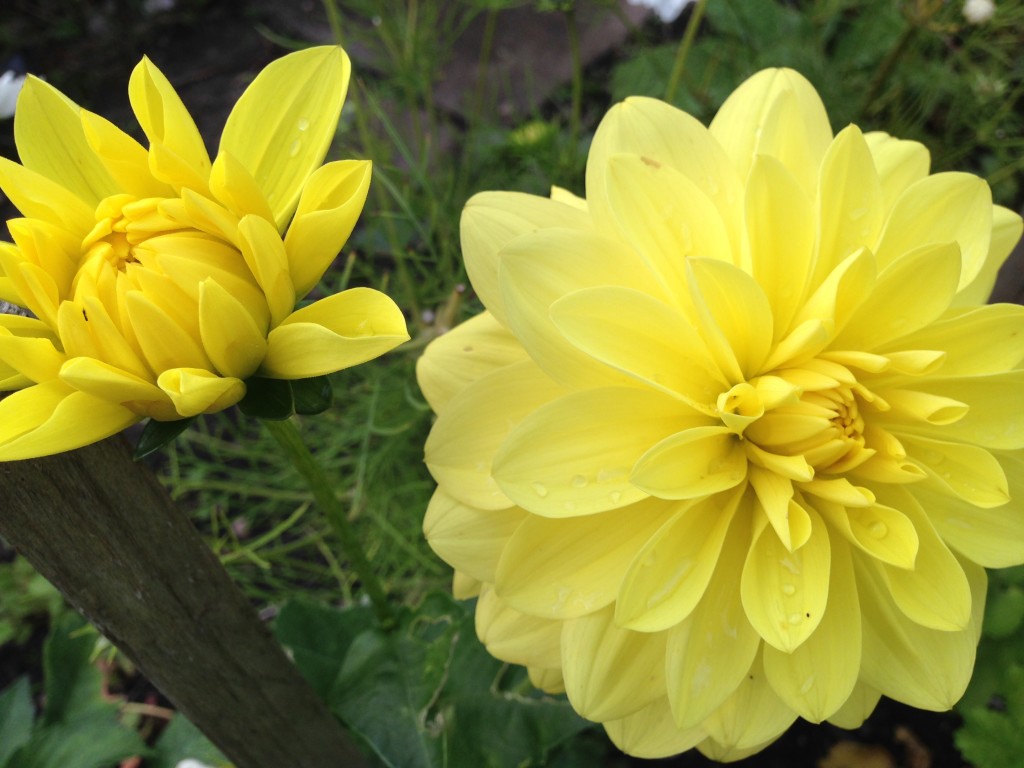 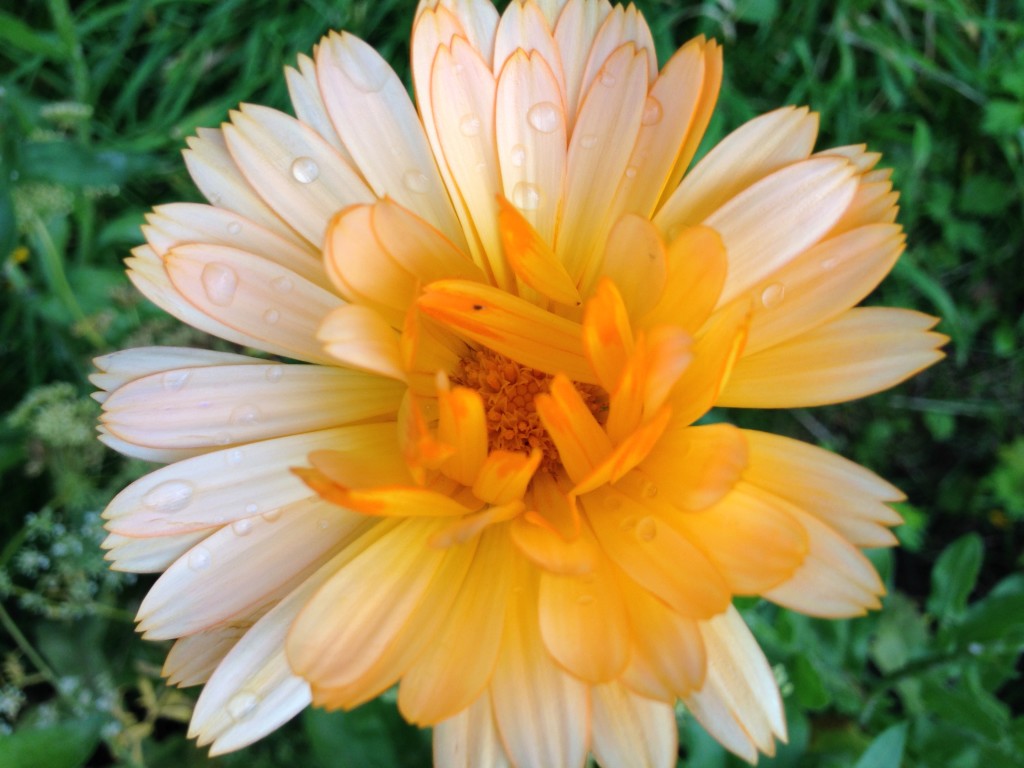 One of the last calendula

Speaking of sunflowers…they’re proving themselves to be showy madams. I think there are six different varieties – can’t quite remember – and the more I pick, the more they keep coming. The issue now is height: the best blooms are a foot taller than I can reach. 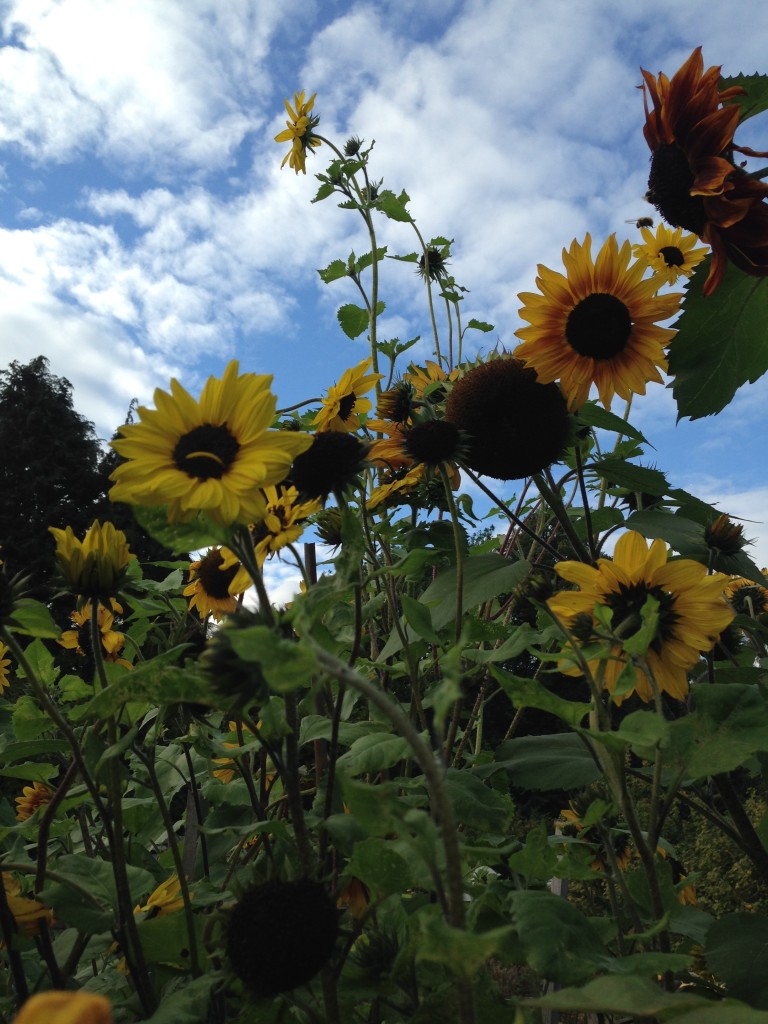 The sunflowers, frankly, are showing off 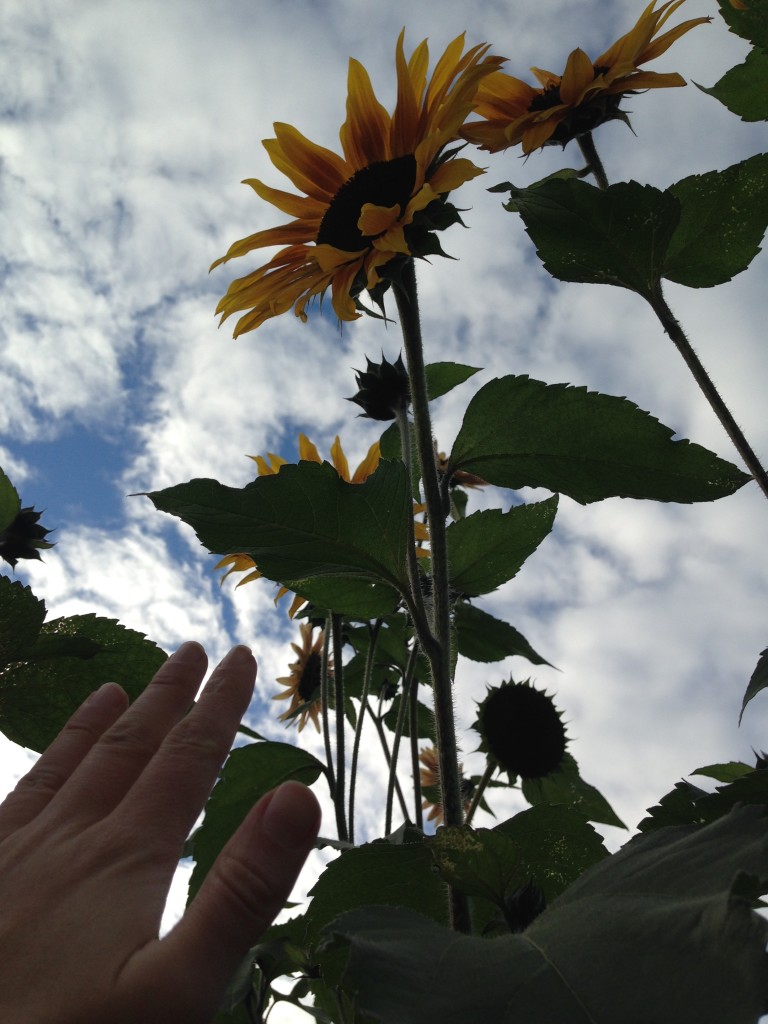 And they’re beyond reach. This is as tall as I go!

Truth be told, I’m getting a little bored of these late summer flowers (I know, it’s a terrible thing to say). Eyes now are on the crysanthemums, which hint at blooming daily but then never quite get around to it. 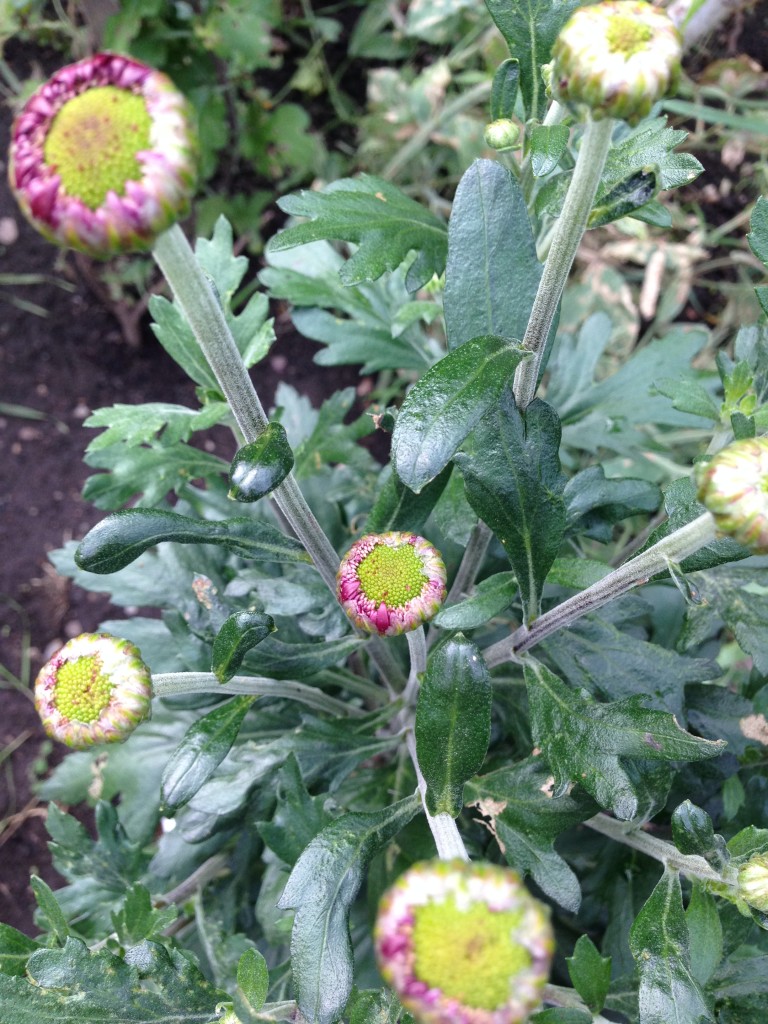 The crysanths are thinking about putting on a show

The beans are starting to fade now, or at least the purple ones are. I’ve purposefully left a load of pods on the vine to fatten up, the beans inside perfect for winter soups and stews. Meanwhile, I discovered yesterday that one borlotti plant made it through the slug assault! We have pods, slim and mottled with pink, which in a month or so will be full of marbled borlottis. 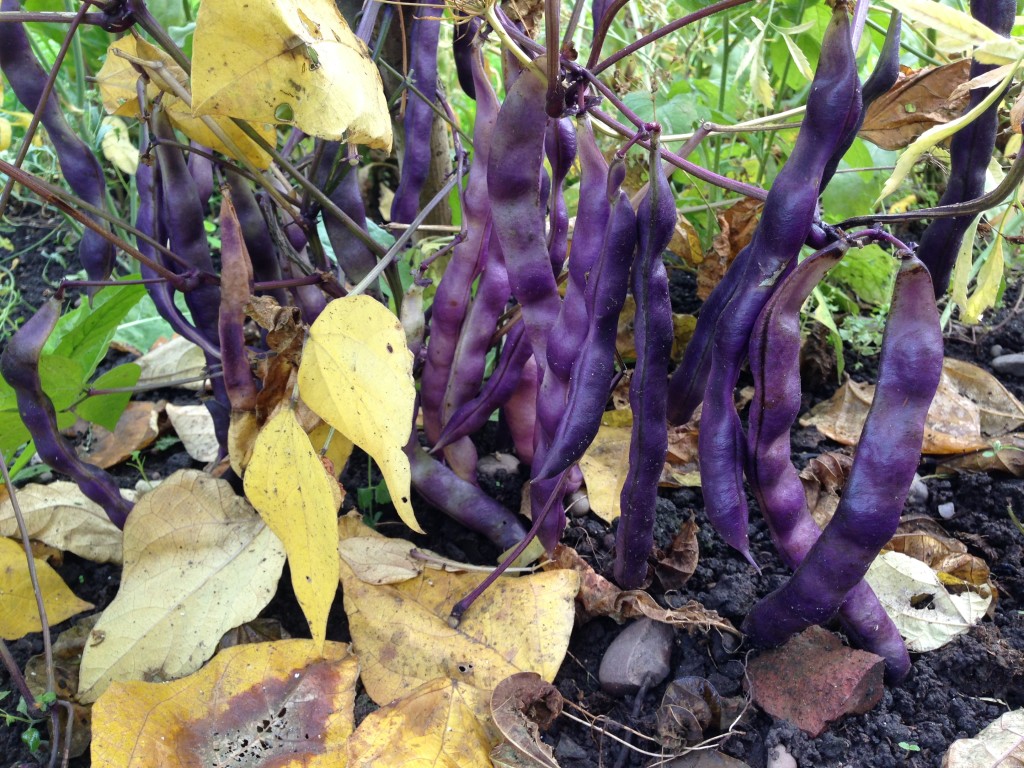 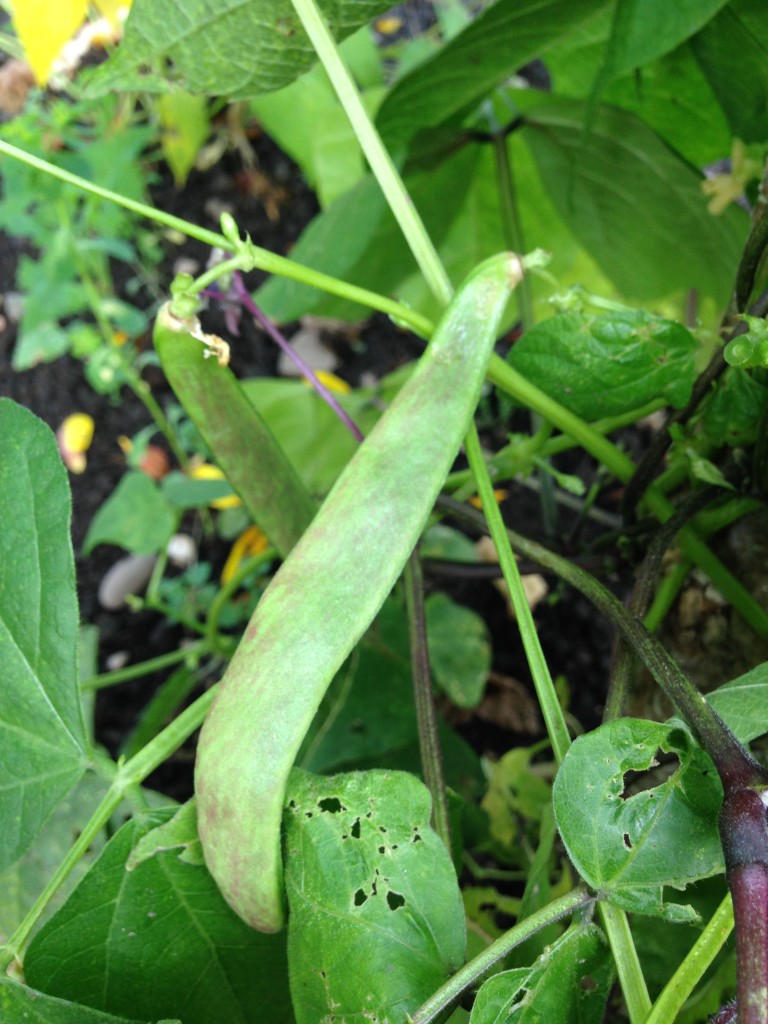 Joy! One borlotti plant made it through and now there are pods

Next to the beans I’ve allowed the bishop’s flower (or ammi) to fade, its seed heads just as pretty as the white fluff of flower. 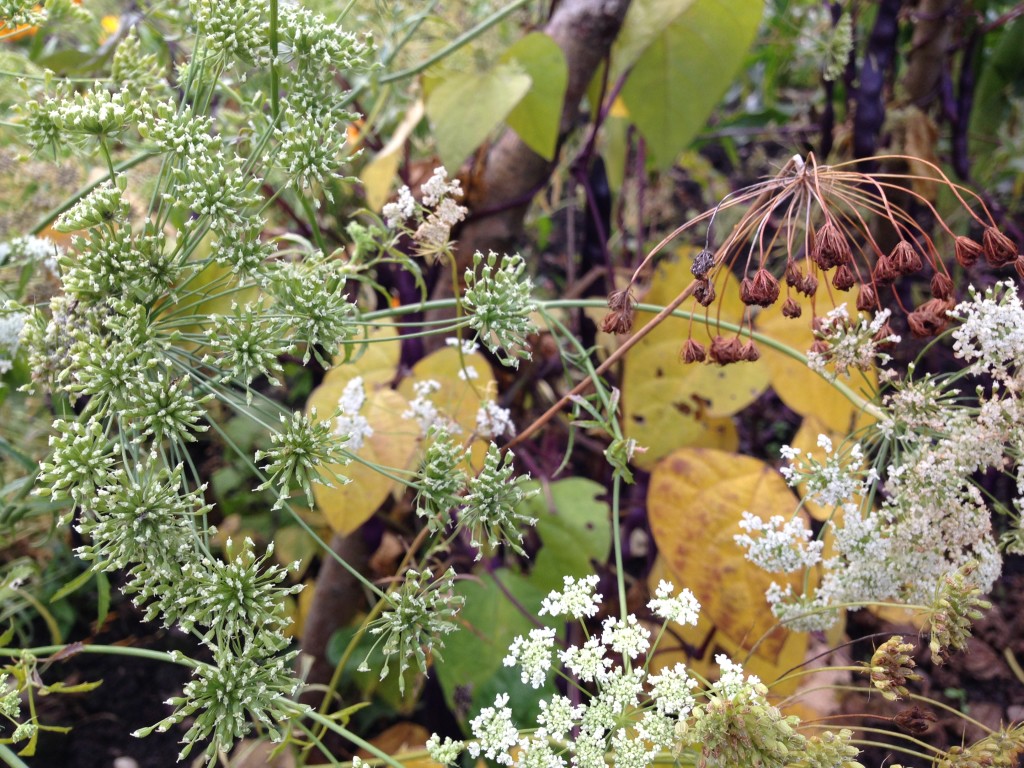 Flower head and seed head coexist on the ammi

Speaking of fading: the berries are long gone, but the blueberry delivers again with a show-stopping storm of autumn colour. 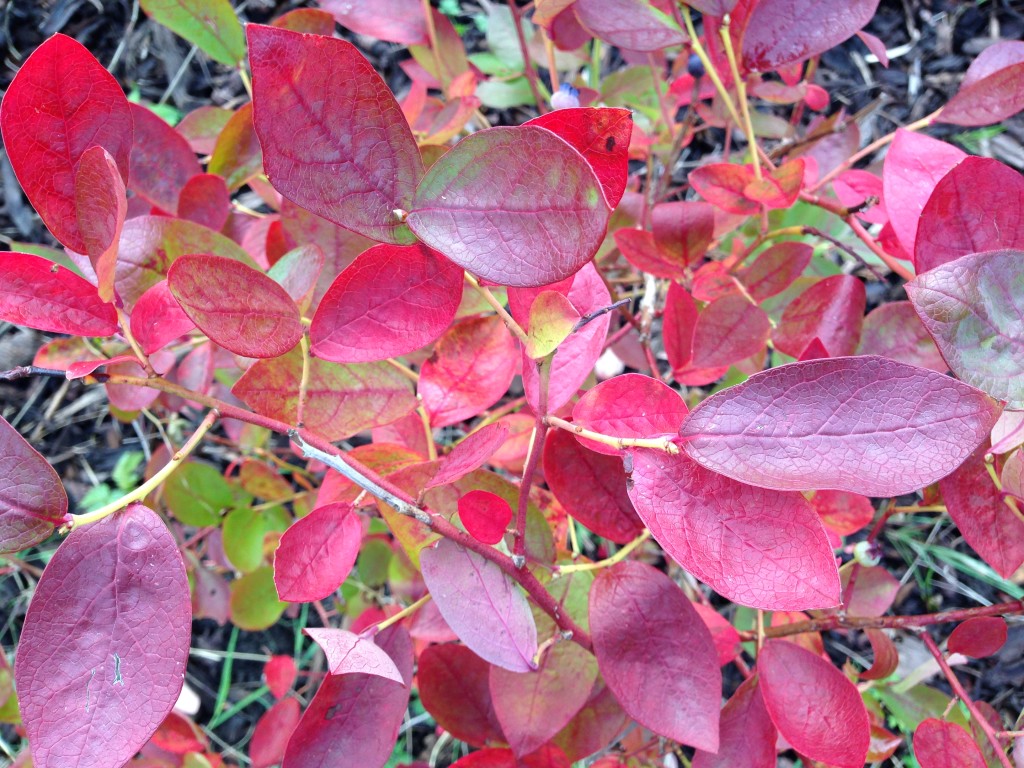 I’ve been forgetting that the allotment is meant to be about harvesting, and harvesting things to eat at that. The hops are nearly ready to come down (Matt’s in charge of that bit), and that favourite autumn delight – corn – has come up trumps. 18 ears are ready to cut! 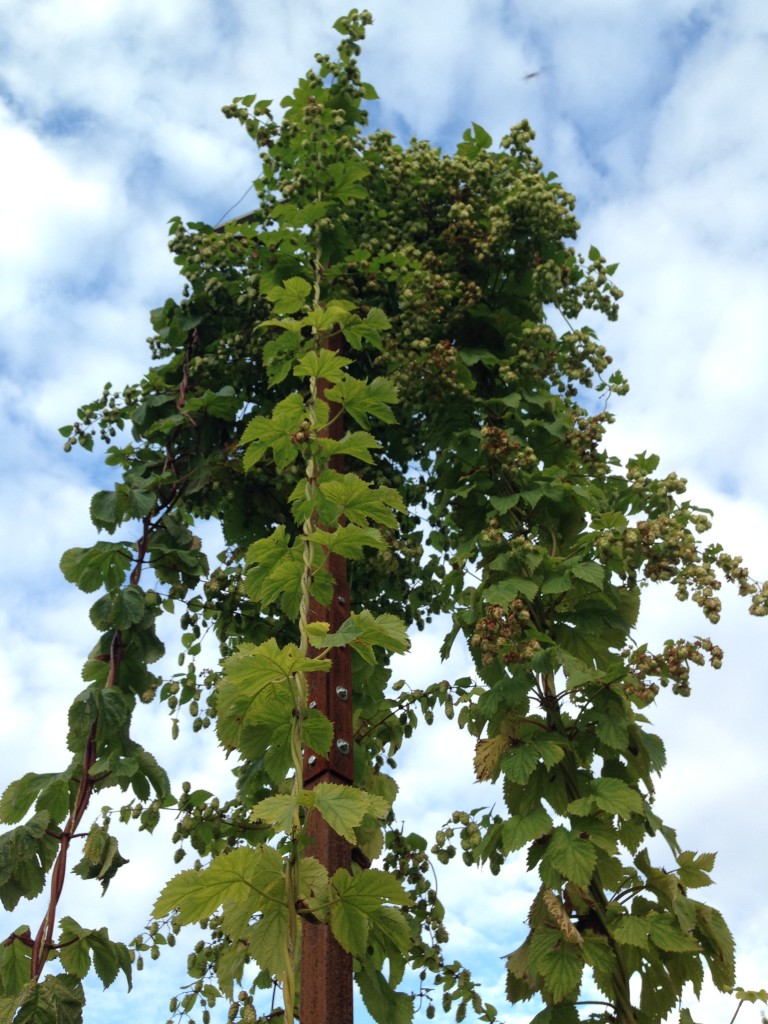 The hops are ready to harvest 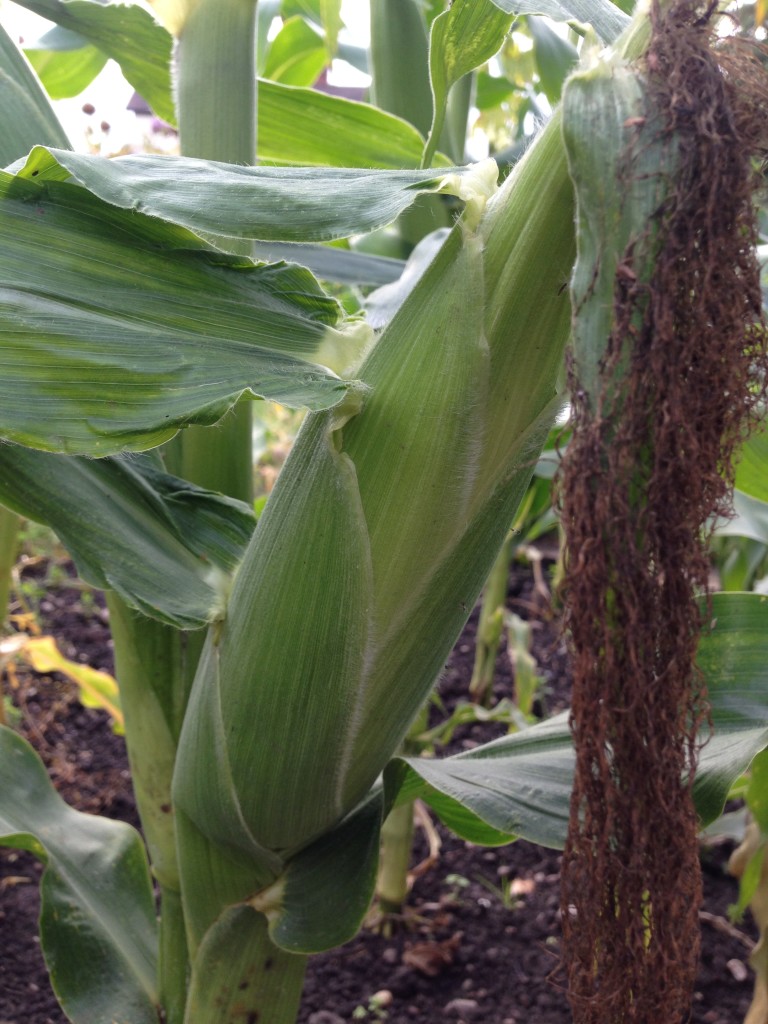 So too the corn, 18 ears and counting

The fennel started life with promise but has now had a hissy fit and bolted. I’ll pull it nonetheless, it’s anise flavour will come in useful somewhere in the kitchen. 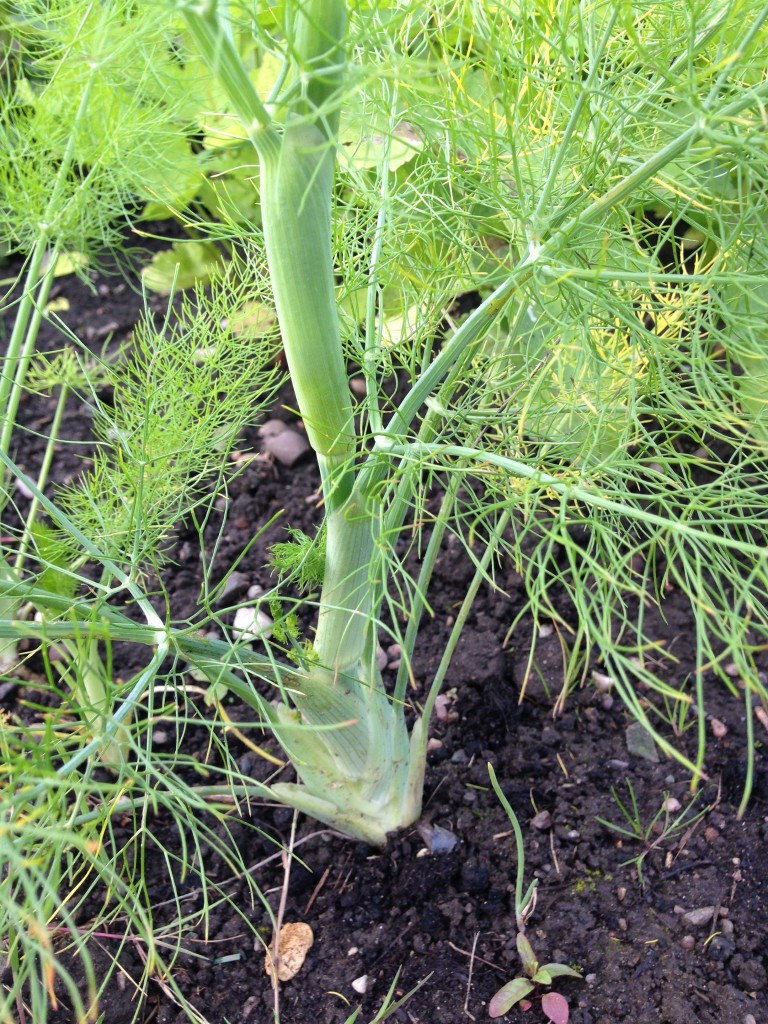 The fennel is deeply unimpressed with the weather and has bolted

The chicory I thinned the other week has relaxed into itself and started to hearten up. I love the flicks of purple, as if a paintbrush has been splattered over the leaves. 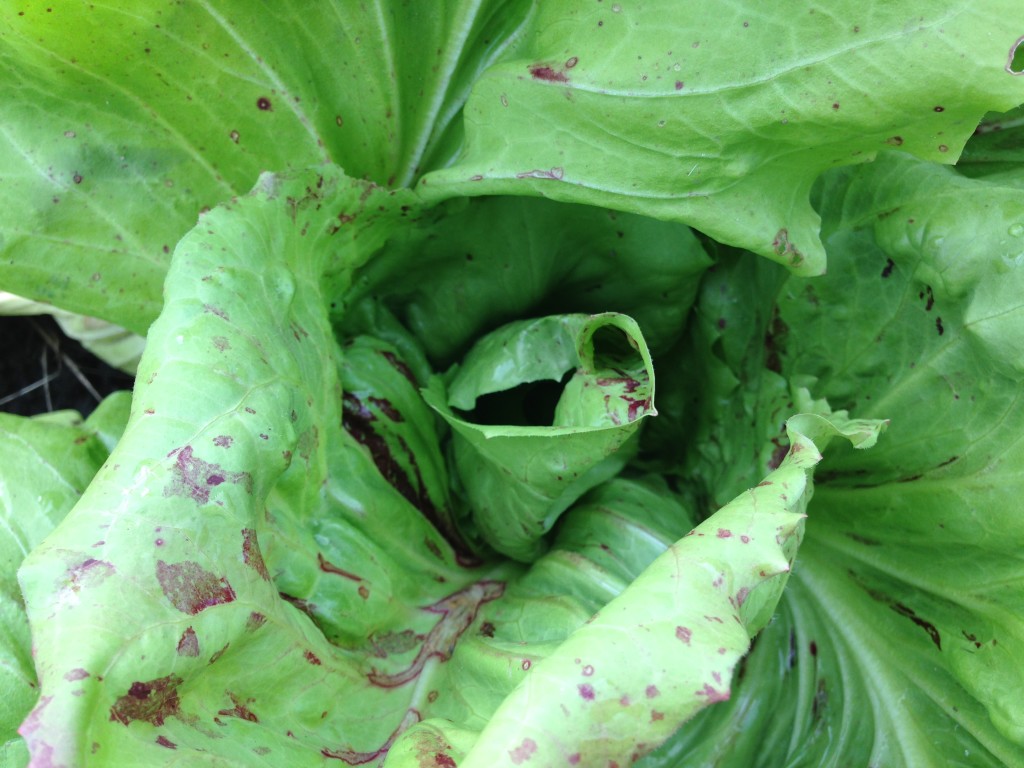 Chicory is heartening up

The chard deserves a special medal for longevity. I planted this row back in March and it’s a bit hole-y now – that’s the slugs for you – but it’s still cropping and tender. The spinach will make it through to winter and, under cover, the mustard leaves and cavalo nero are relatively intact. 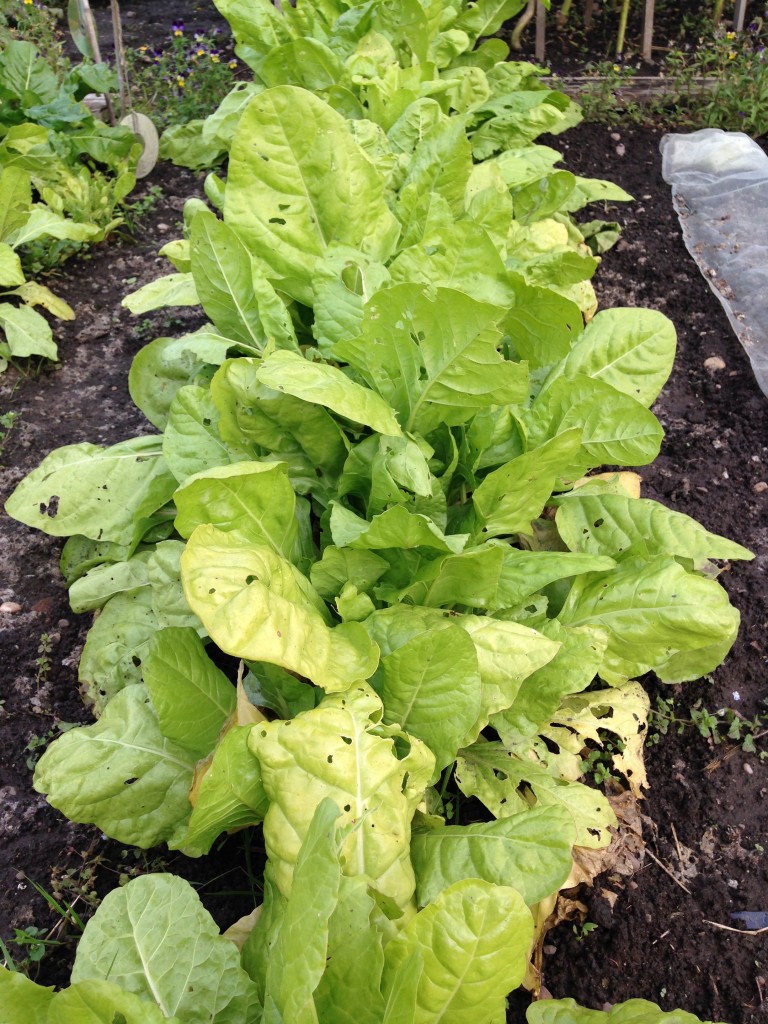 The chard is still going strong, despite slug damage

The raspberries keep coming and, weather permitting, will do so for a few more weeks I expect. 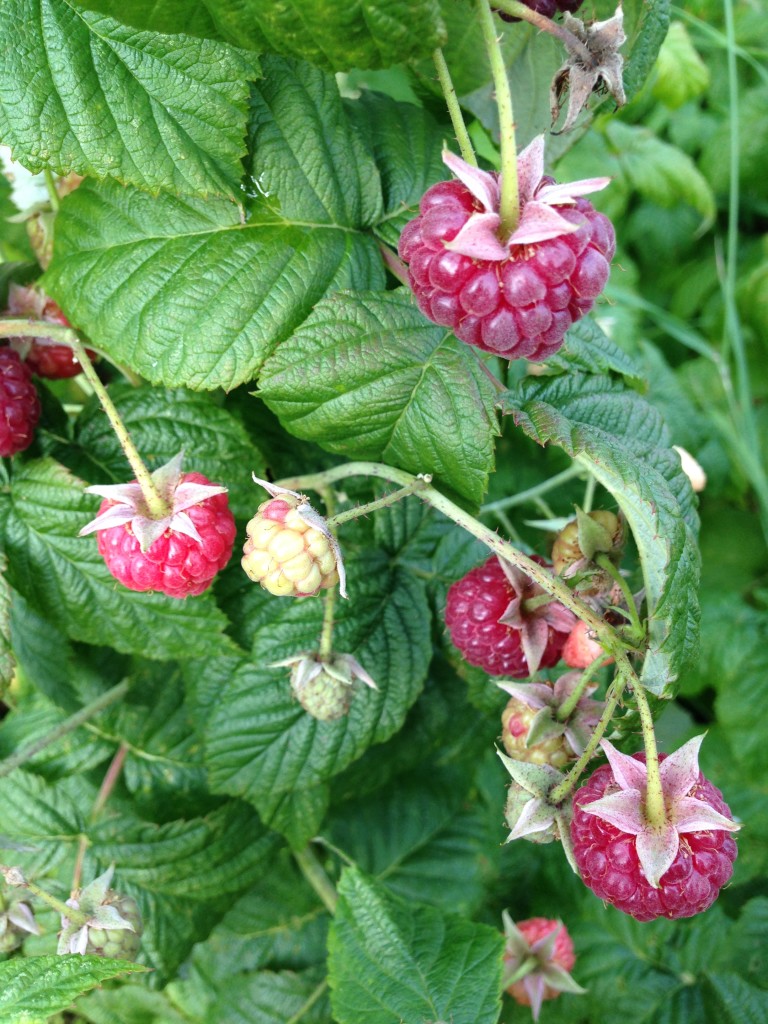 Amidst the loot, there are the interlopers. I couldn’t bring myself to shift this weed, which has seeded itself under a brick – no soil required. 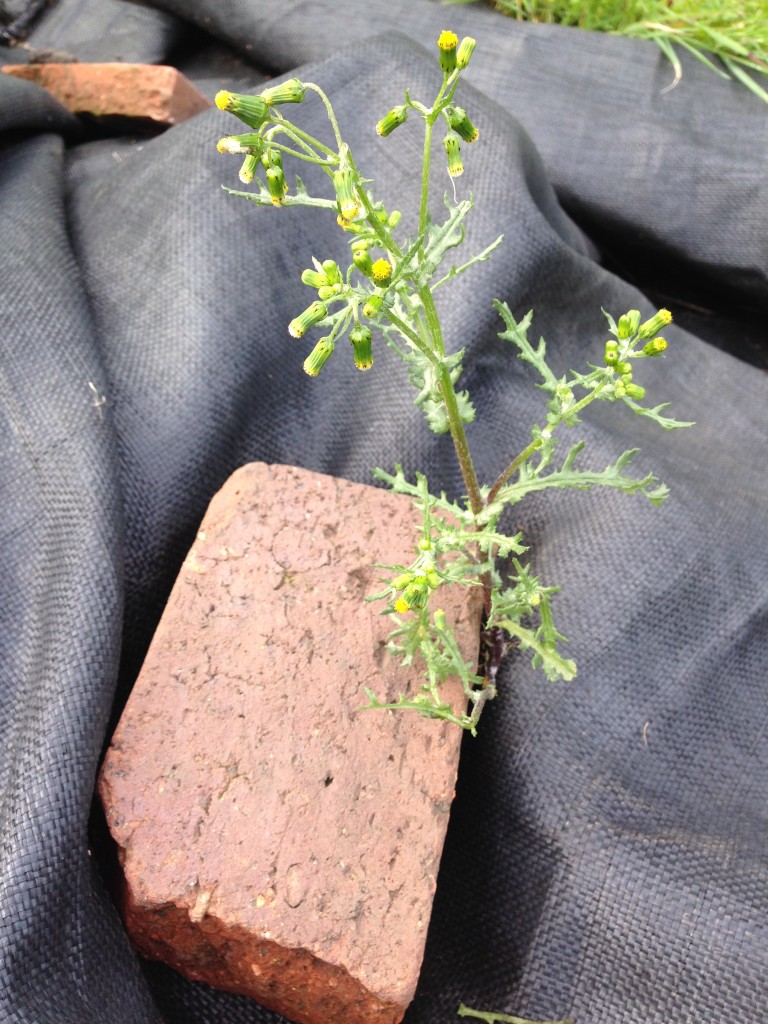 This brave plant has rooted itself under a brick on top of plastic. No soil here. It gets marks for perseverance. 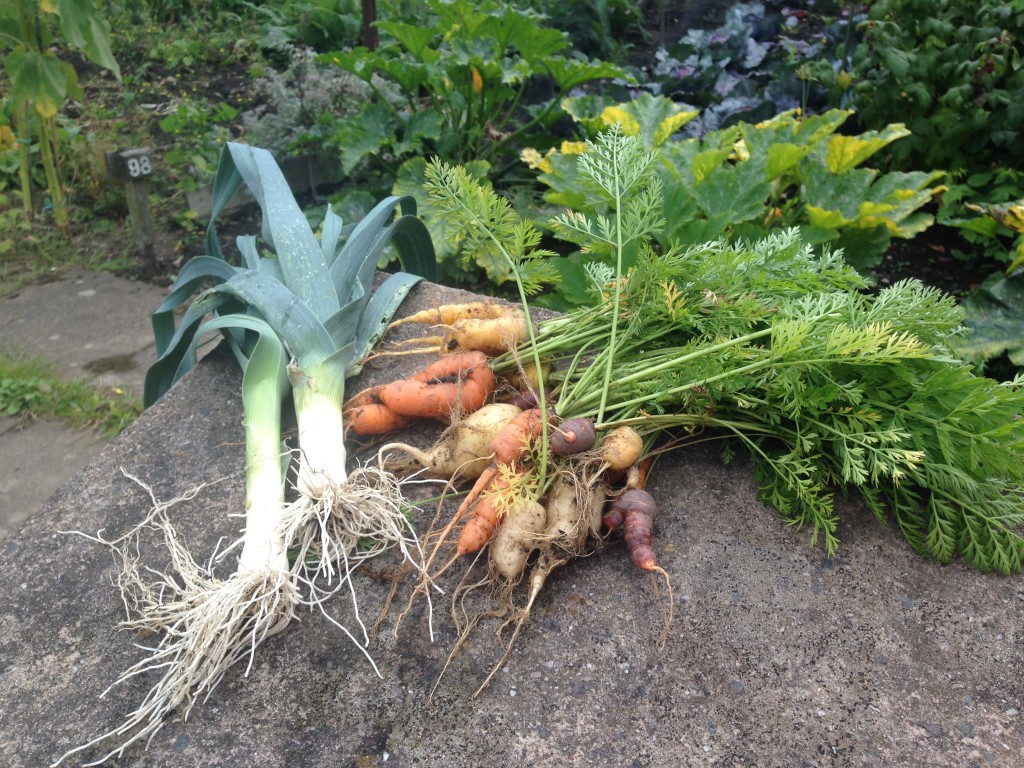 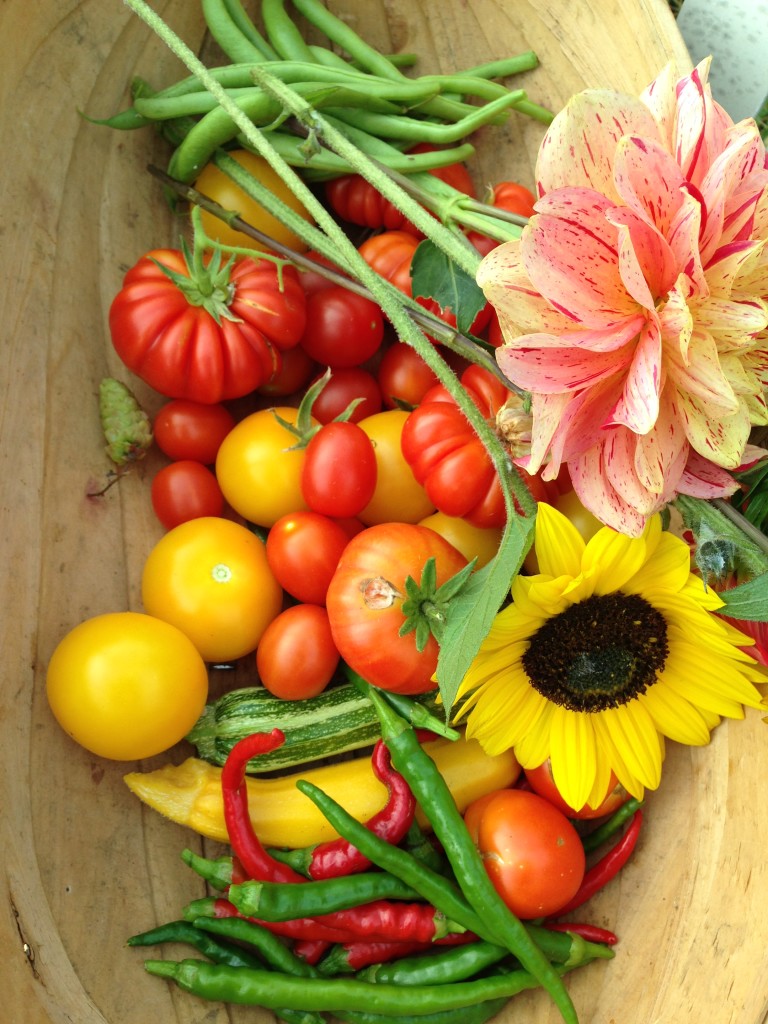