I’ve been wondering lately if we, the British, have an ignorant relationship with weeds. We swear at them, douse them with chemicals, pull them up, generally fret, and yet again and again they return, paying no attention to our foot-stamping.

Other countries do not behave this way. In Greece, people actively gather weeds to supplement the diet: dandelion, wild chicory, goosefoot, wild beets are cooked up with their roots in water, dressed with olive oil and vinegar and eaten for lunch. A useful (and tasty) restorative when times are hard.

My desert island book would be the extraordinary Honey from a Weed by Patience Gray, a woman who spent the 1950s living in isolated villages around the southern Med, in Italy, France, Spain and Greece, with her sculptor husband (they moved around to live near the marble quarries). Her record of the food lore and cooking cultures of these villages are a precious record of a now lost history. She gives alot of attention to the gathering of weeds, and her entry for fat hen (Chenipodio in Italian) caught my eye:

“Fat hen, the well known annual, has bluish green leaves with a silvery sheen… It can be used in salads or simply cooked in butter; they taste a little of broccoli.”

Note: Fat hen is endemic on our allotment. I swear at it and pull it up. More fool me.

The Greeks, of course, do a lot with greens in general, and so I turn to the classic spinach pastry spanakopita. These are usually made with spinach, but I prefer to use greens with a little more substance to them: this week I chose chard, Russian red kale, beetroot tops, sorrel and spinach beet, all harvested in armfuls from the allotment. I’ve used mustard greens before too. Maybe next time some of that fat hen will make it to the mix. 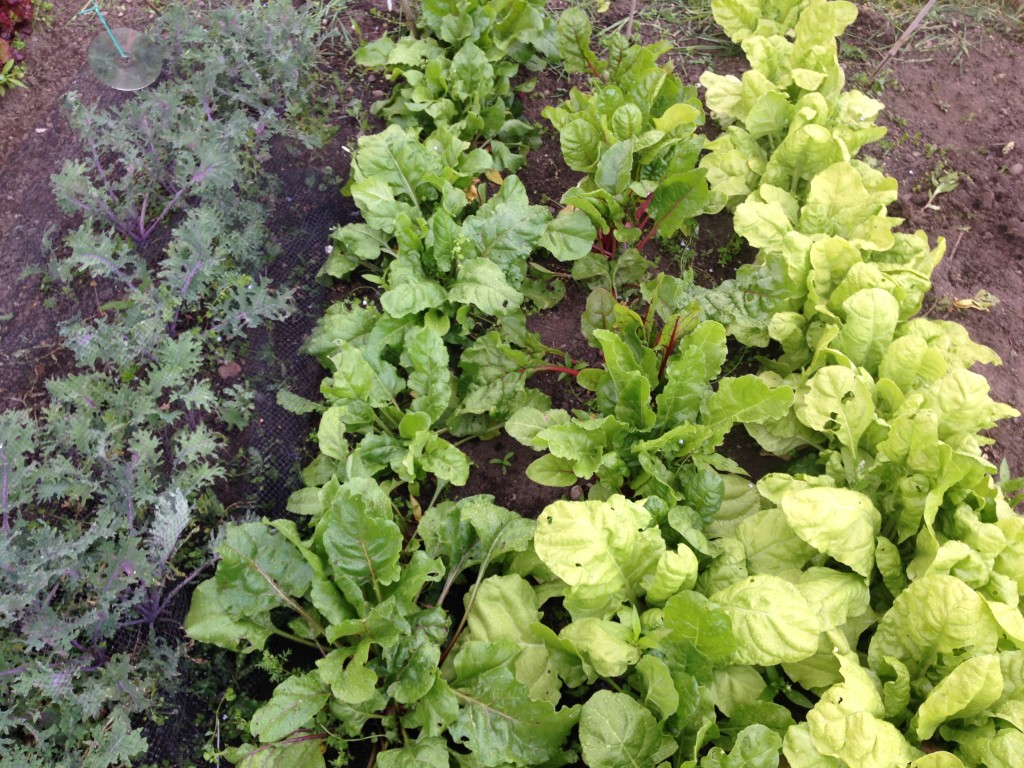 I never weigh the greens: suffice to say that a BIG colander-full should be enough. Give them a good wash and then slice into ribbons, keeping the stalks separate – they need a little more cooking. 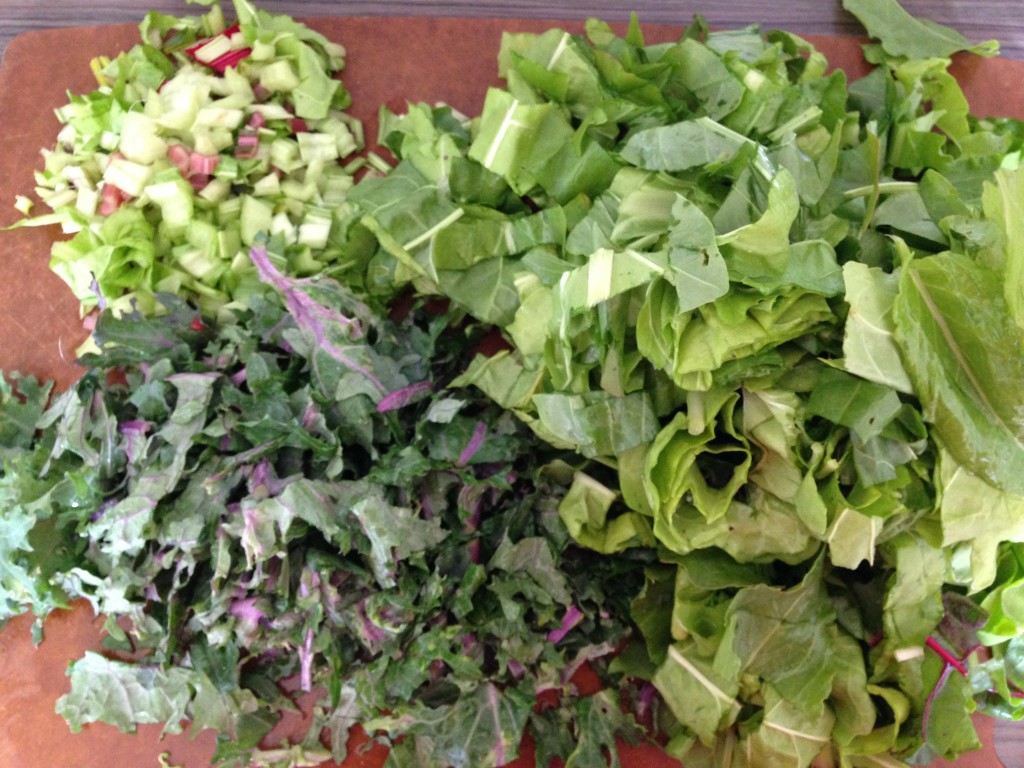 Wash and slice the greens, keeping the stalks separate

Cook the greens in a little boiling water, starting with the stalks, then the kale, then the chard, then lastly the delicate sorrel. Wilt them down for a few minutes then drain. 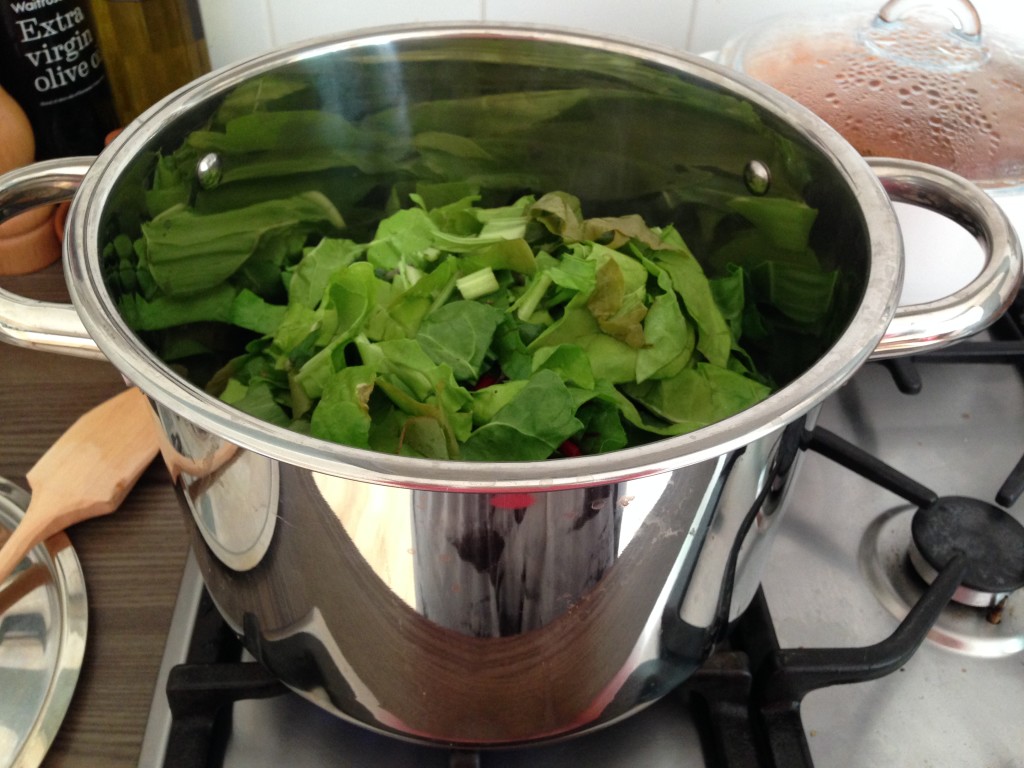 Cook ’em down in a BIG pot

The next stage is really important. The greens need to be squeezed dry to within an inch of their lives. Some recipes say to press the leaves between two plates, but I just use my hands. LOADS of liquid will come out, which is good, because you really don’t want it in your pastry. When they’re all dry, give them a good chop. 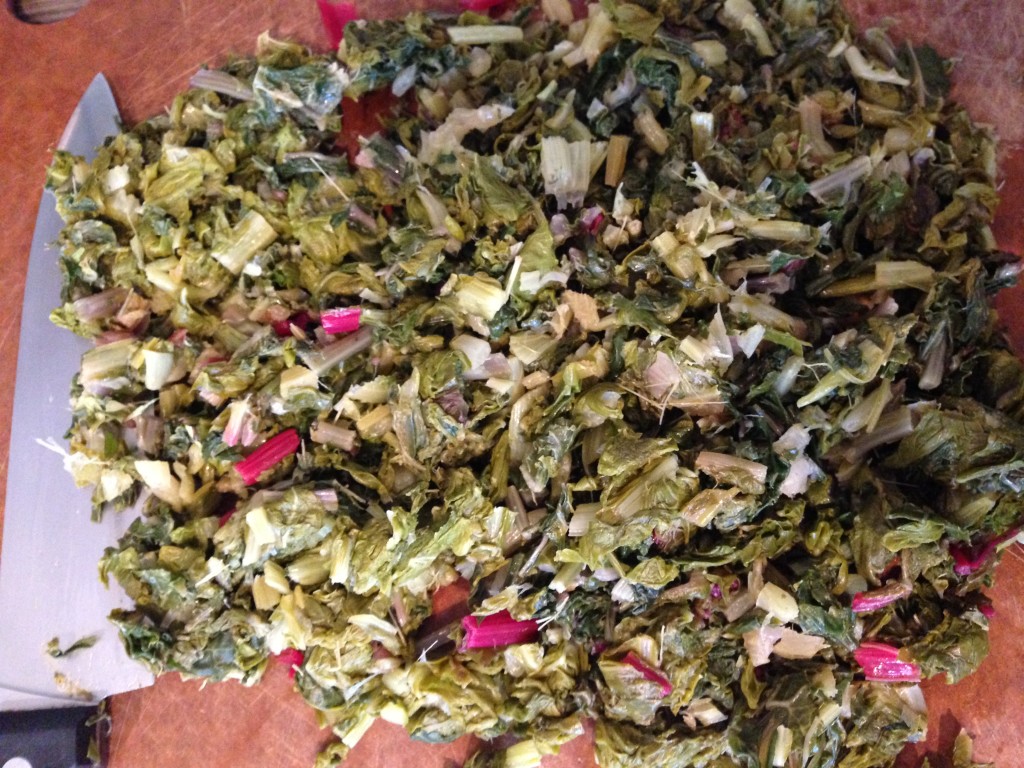 Squeeze thoroughly until dry then chop

Next, make the filling. Soften a small onion in some olive oil along with a few spring onions, then add them to a bowl along with the greens, an egg, a good scraping of nutmeg and a little salt and pepper. You won’t need much salt because of the next addition: cheese!

I use feta, crumbled into large chunks, and also a little grated hard cheese. Usually it’s parmesan but the other day I came across Greek kefalotiri cheese. It’s one of those squeeky-polestyrene cheeses, like halloumi, but a bit more pungent. Last in the mix is a good handful of chopped mint. 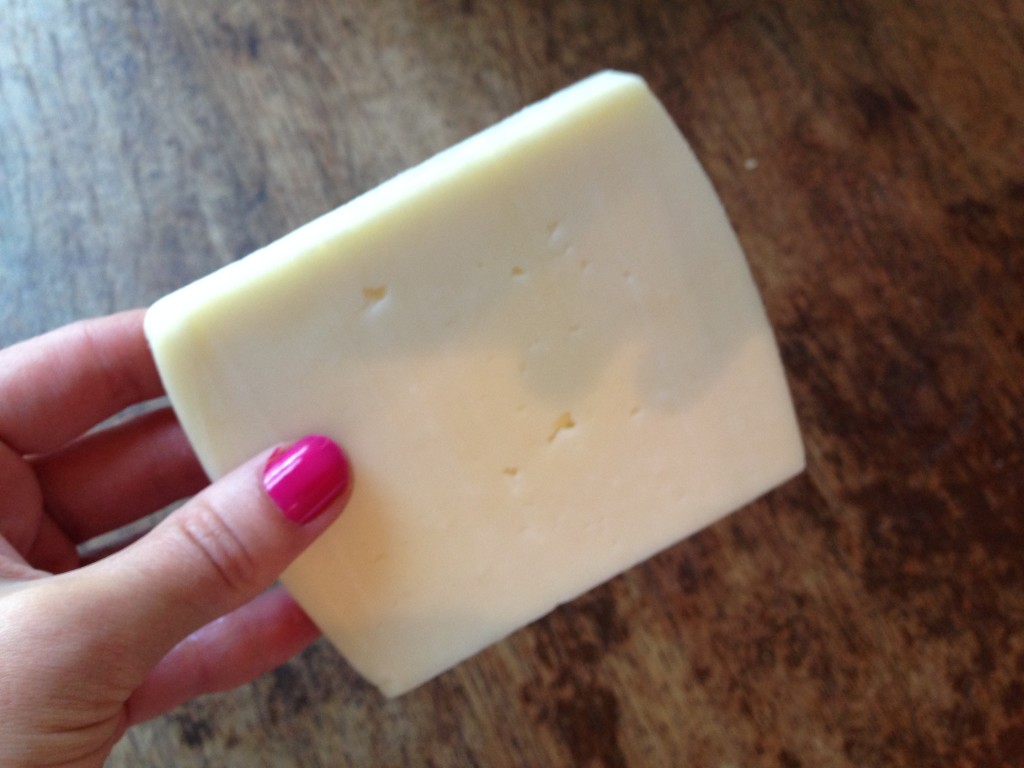 Now the fun bit! Get your filo sheets – buy them, obviously – and lay out on a tea towel. Slice the sheet in half vertically and lay one half on top of the other; this makes them easier to work and also stops the sheets drying out. Then get yourself some butter, melt it, and brush the top sheet with the golden goodness. Do not use margarine. The butter gives the spanakopita really good flavour! 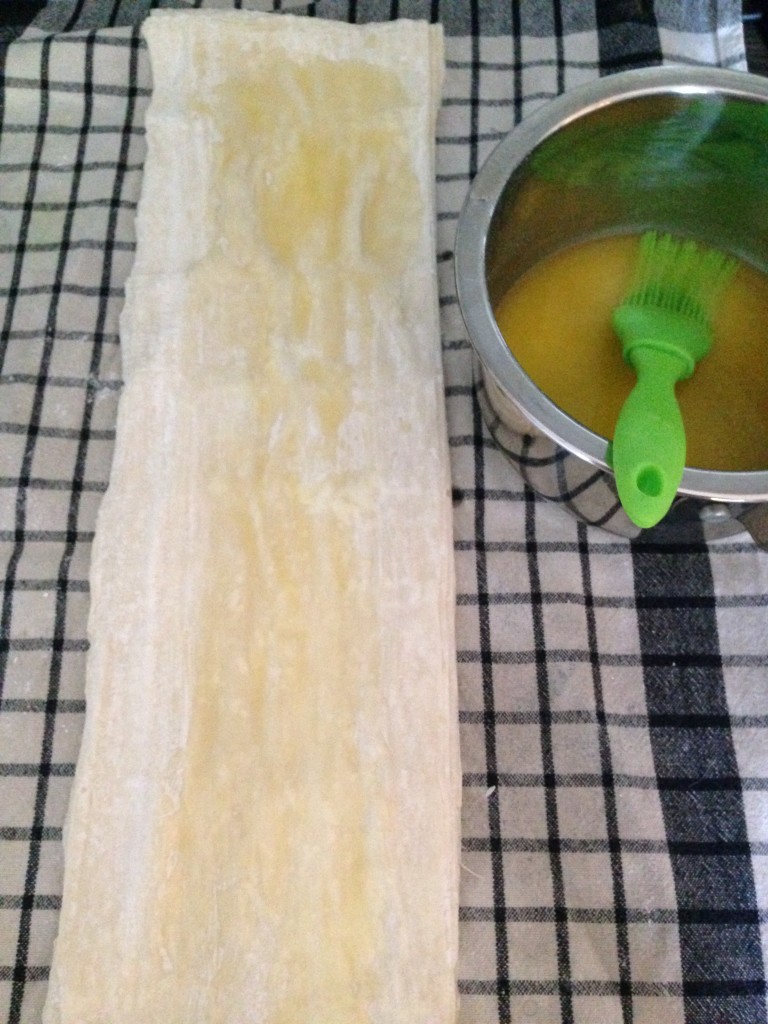 Slice the filo in half, put the two halves together (so they don’t dry out) and brush the top sheet with butter

Then you get your filling, put a generous dollop on the top strip, and fold it up into a triangle. 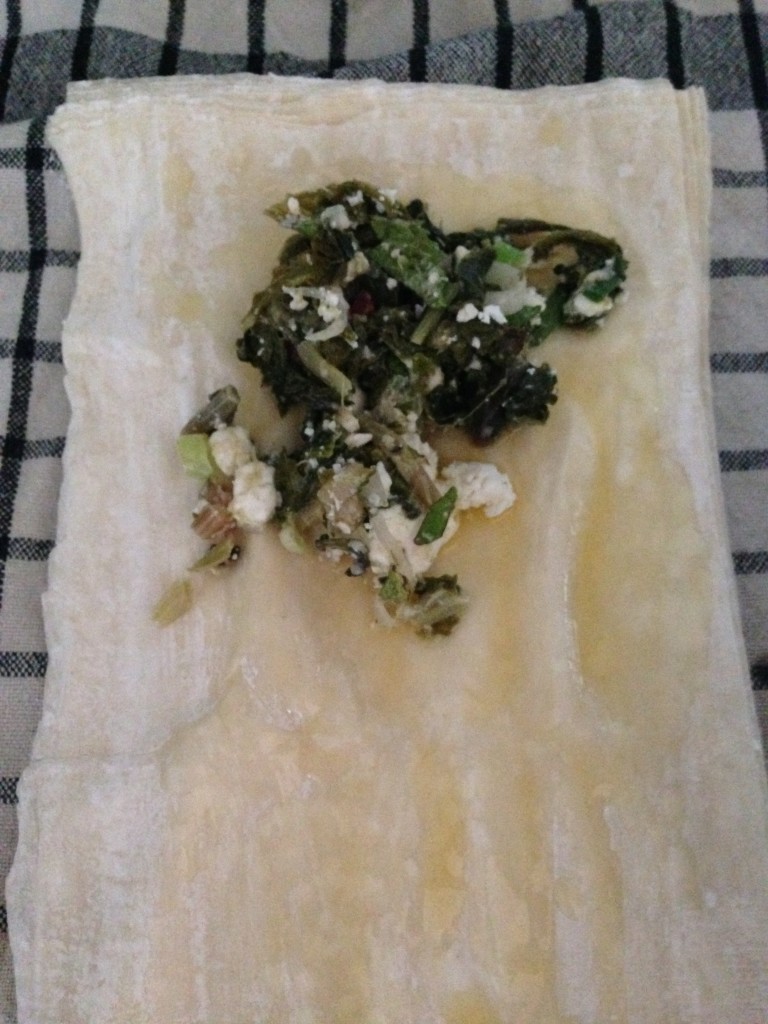 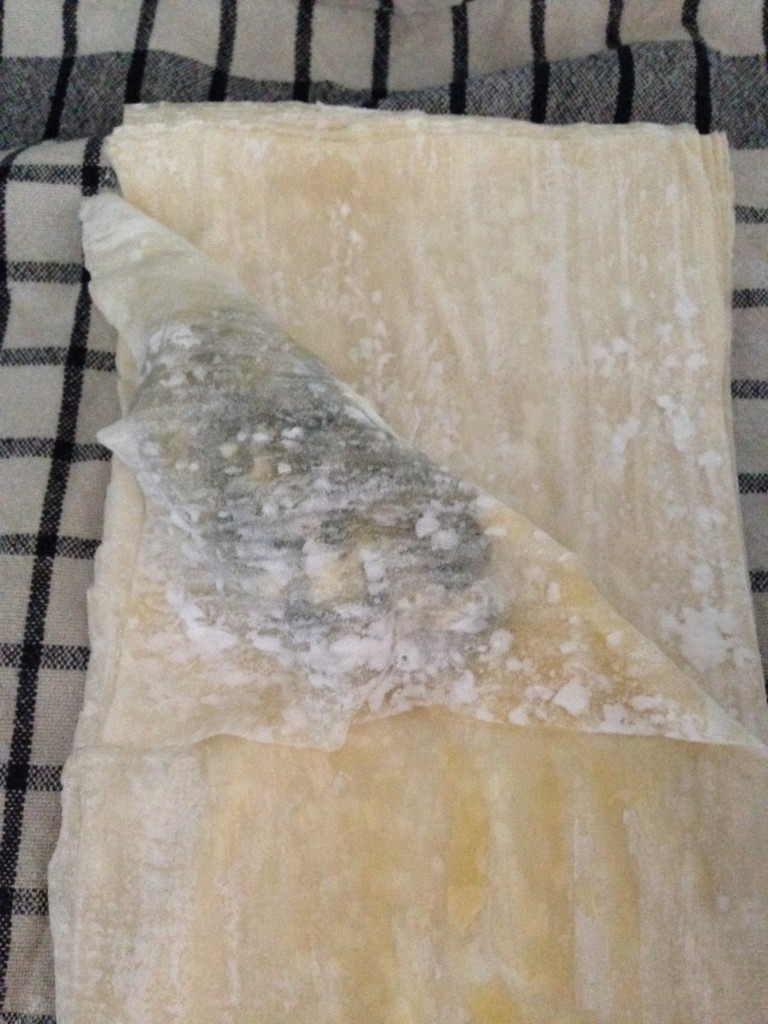 Fold up in triangles all the way to the bottom

I suppose you could make these into cigar shapes, or even into a whole pie. Either way, do not stint on the butter! More of it needs to go on top of your pastries before they bake: 180c for about 20-25 minutes until golden. 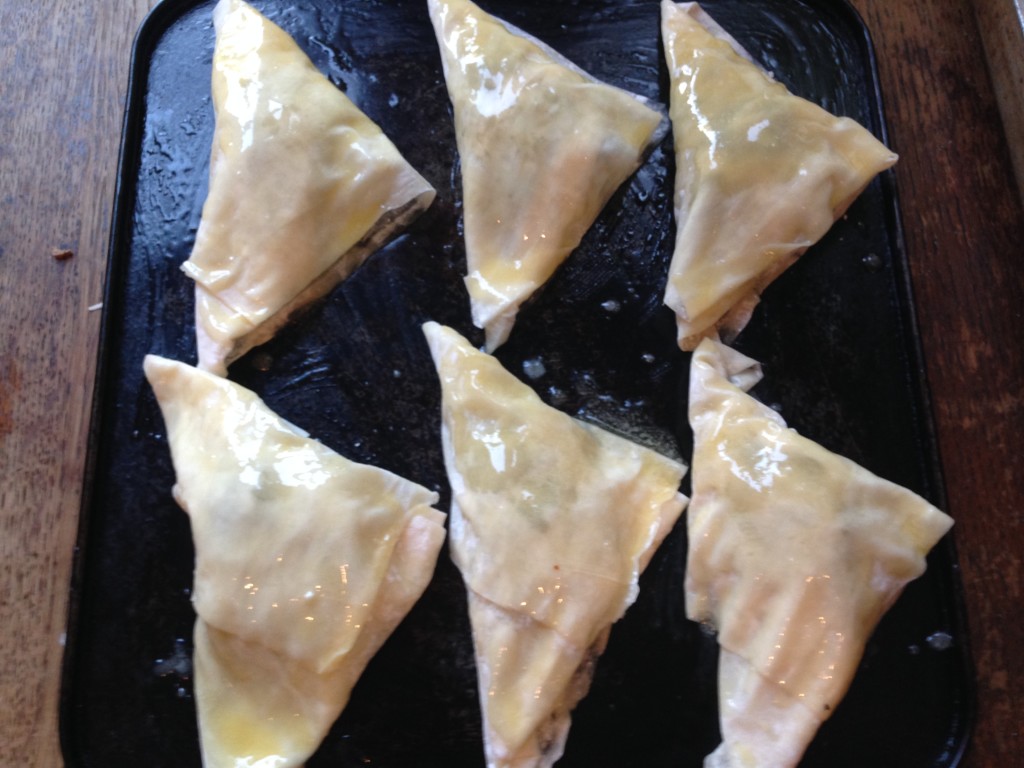 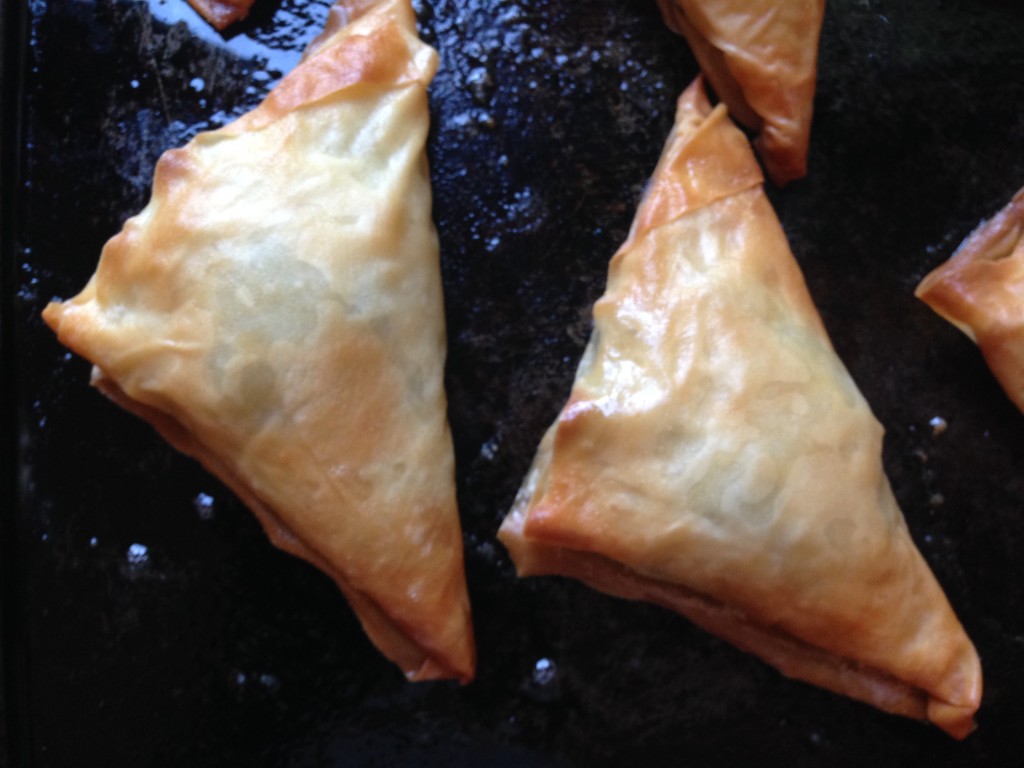 I know, a spinach pastry sounds a bit sandals-and-lentils. Do not be fooled, for these are amazingly delicious. I do think it’s worth finding (or growing) proper fresh greens for this recipe as supermarket spinach seems to disintegrate in seconds; a little texture and robustness is a good thing. Serve warm or at room temperature, plus they freeze well. An excellent way of eating your greens.

1/2 small onion or one shallot, diced

Prep your greens: wash them, shake dry. Slice the green part into ribbons and the stalks into small slices. Cook in boiling water in a large pan, starting with the stalks then adding the greens. Cook until just wilted then drain. Leave to cool then squeeze dry. Chop.

Heat the oil in a small pan, soften the onion then add the spring onion and cook for a minute or two, until just soft. Put into a bowl with the greens, egg, nutmeg, cheese and mint. Season to taste.

Preheat the oven to 180c. Melt your butter and grease a few baking sheets. Unroll the filo onto a tea towel. Slice the sheets in half vertically, then lay the two halves on top of each other. Brush the top sheet with butter. Lay a spoonful of the filling on the top of your strip then fold down to make a triangle. Move to the baking sheet and brush with butter. Repeat until you’ve used up all the pastry and filling.

Bake for about 20-25 minutes until golden and brown – keep an eye on them as they can burn easily. Eat warm or at room temperature.

One thought on “Spanakopita”