Spring has undeniably sprung and not a moment too soon. Birmingham is now awash with yellow daffodils, on roadsides and in parks, and the early morning birdsong has picked up: there’s less of it here than in the country, but it’s a comfort nonetheless. If you know where to look, now’s the time to fill your boots with lush wild garlic. Forage for it now whilst the leaves are still tender and young, and it will bring a vibrant freshness to anything that you care to eat it with. 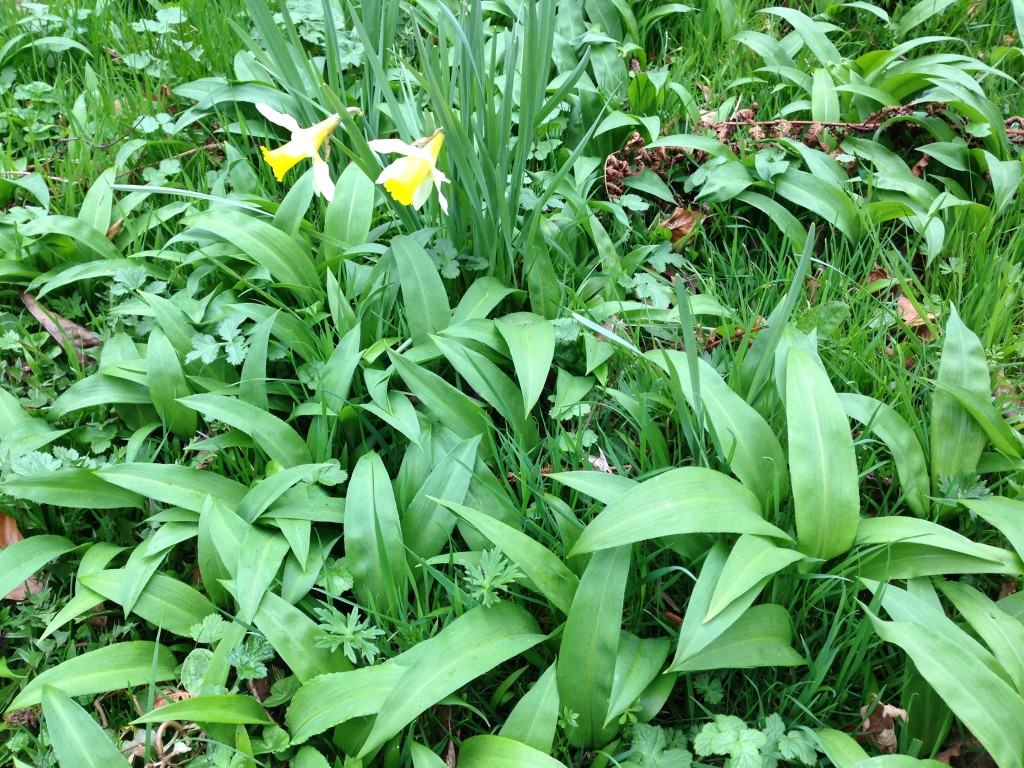 Now’s the time to search for emerald green wild garlic

Encouraged by the weekend’s sunshine, but daunted at the amount of work that would need doing, I headed down to the allotment for what is only the third or fourth visit since Christmas. The greenhouse is surviving on a wing and a prayer: one gust of wind and it will be off, flying away as if trying out for the opening sequence of The Wizard of Oz. The grass is shaggy and long, there are tufty weeds emerging where they shouldn’t and the ground looks hard and cold….but on balance, it’s not in too bad a state at all. Nothing that a few hours of remedial carpentry (Matt) and grass strimming (me) can’t fix.

Plus there are still goodies to harvest. I planted this purple sprouting broccoli last April and it spent the summer covered in whitefly, but the winter chill has done its work. It’s now tall and lush, and cropping well – I’m not convinced that it warrants taking up a full eleven months of growing space, but it is good to be picking veg in the traditionally hungry-month of March. 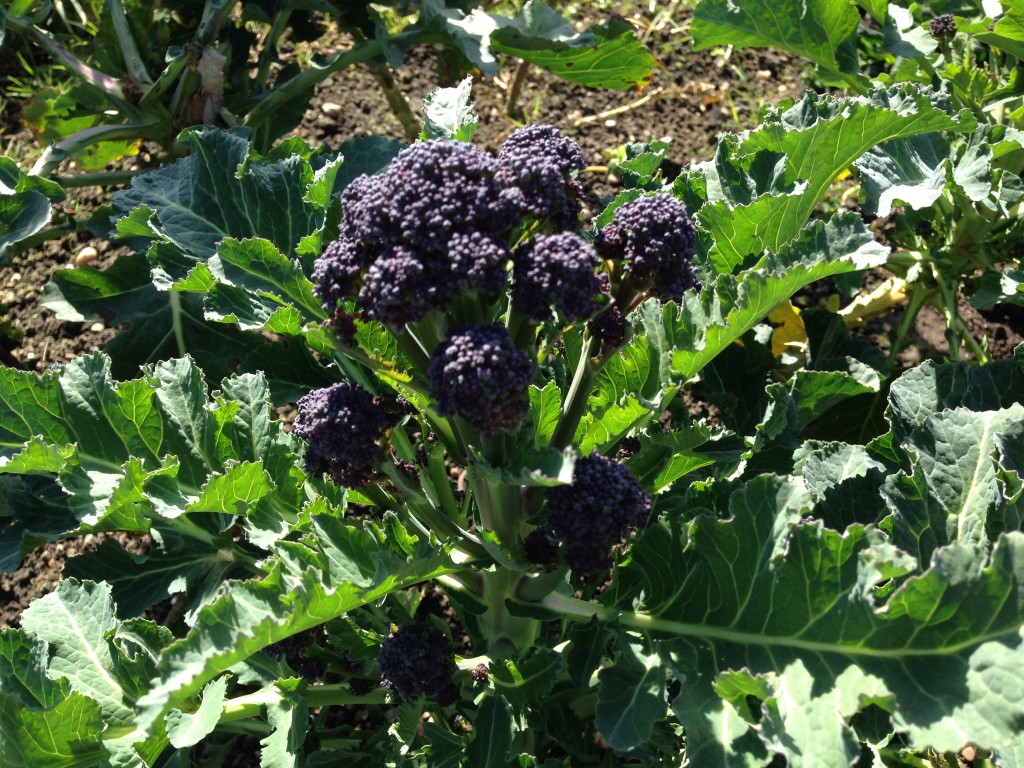 I’ve been working out the growing plan for 2017 and the first planting – a set of healthy broad beans – has now gone in. 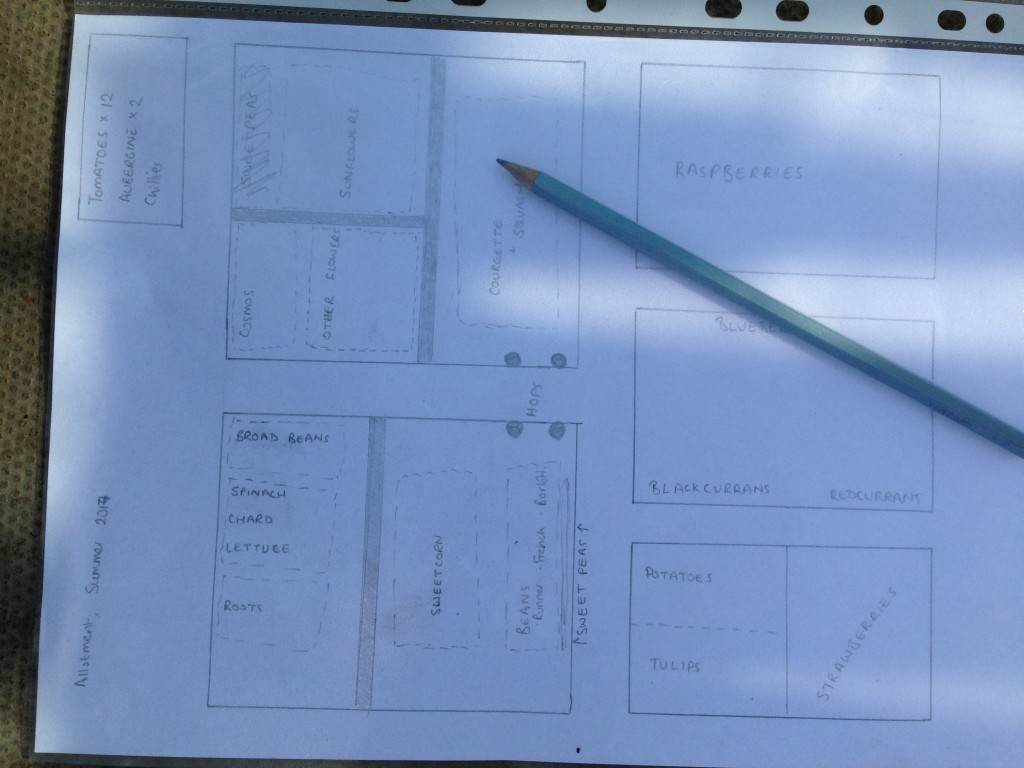 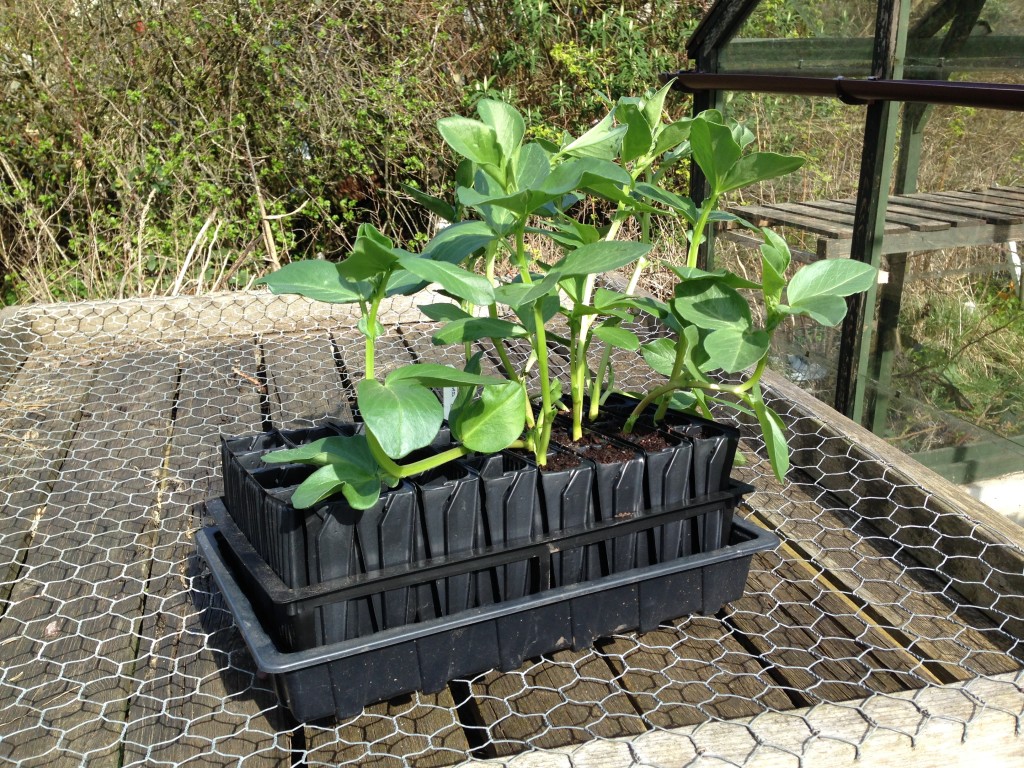 Broad beans ready for planting out 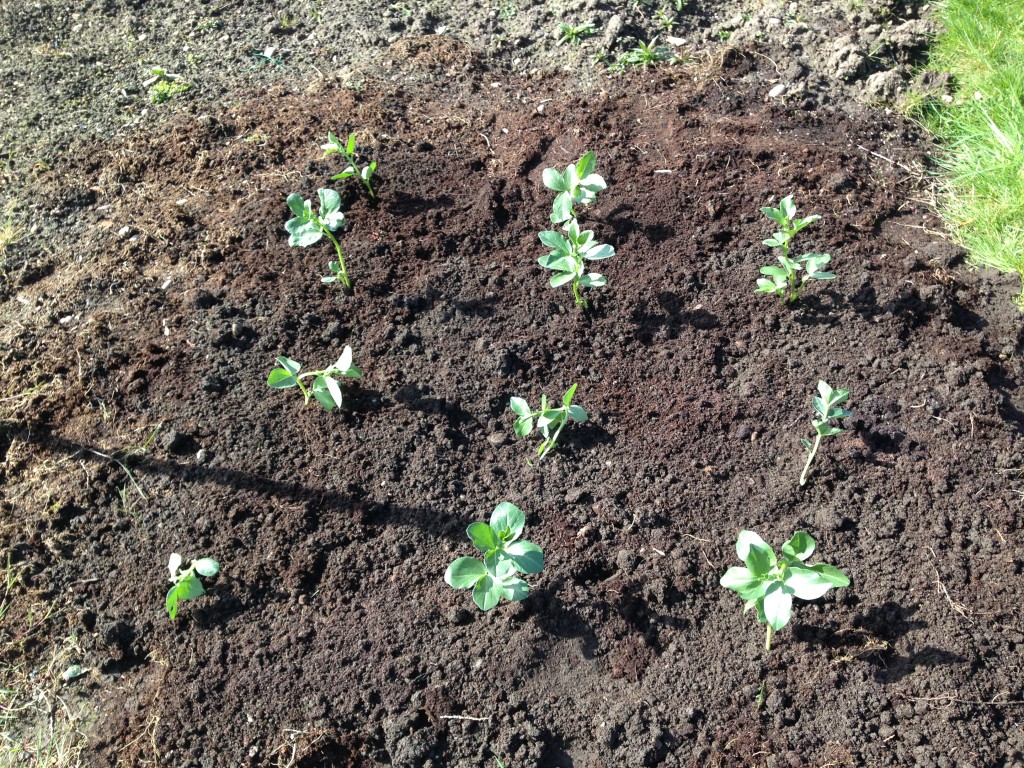 First allotment planting of the year!

Back home in the ‘potting shed’ (i.e. the sun room/conservatory/junk room at the back of the kitchen) I’ve set up a temporary set of rickety tables and old newspaper, ready for seed sowing. Over the next few weeks I’ll get the 50-odd varieties of flowers and veg seeds going but for now it’s the turn of the tomatoes: the round yellow golden boy, the beefy fiorentino and a plum variety for passata. 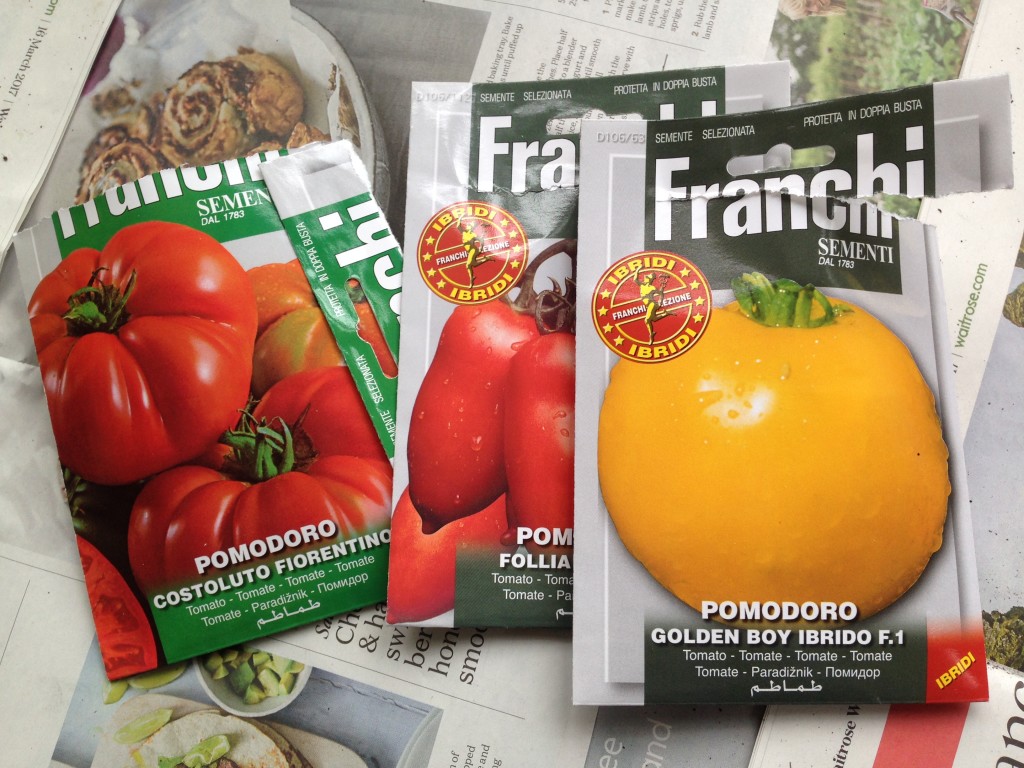 Inside, it’s time to sow tomatoes 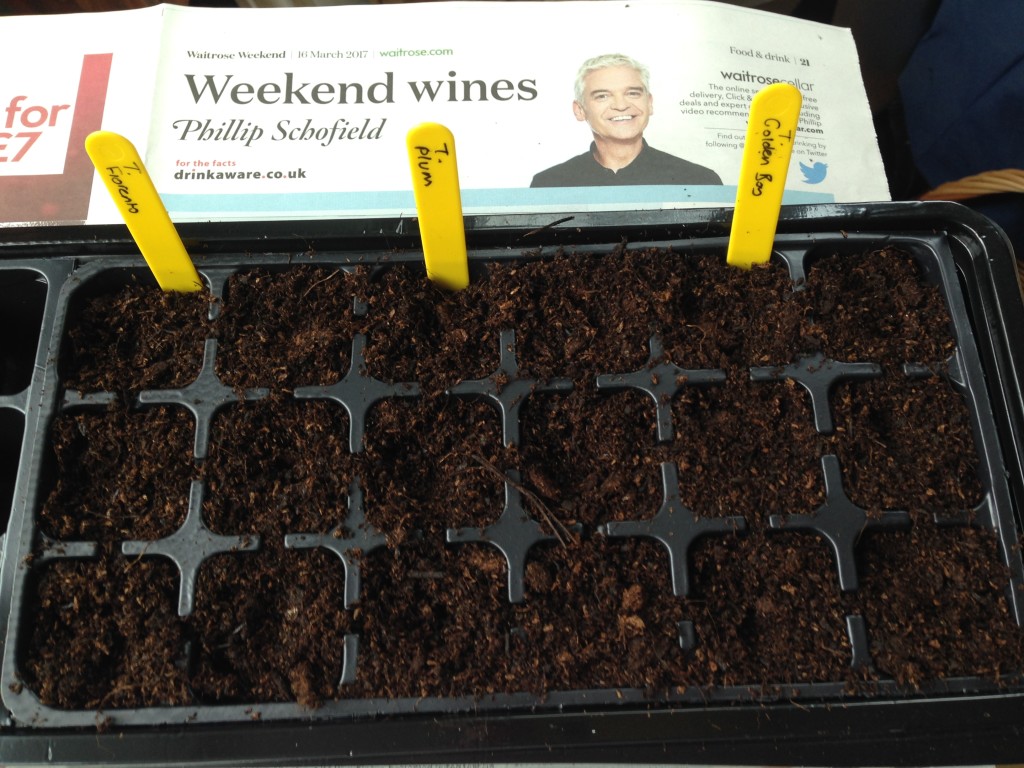 Hopefully Schofield will give them moral support

There’s also been a day of graft in the garden, though not by me. My folks came on Sunday armed with three David Austin roses for the new border (Gertrude Jekyll, Claire Austin and Mary Rose) and a host of alliums, which I’ve now supplemented with lavender Hidcote and some gorgeous white foxgloves. In a few weeks time we’ll have shades of pink, white and purple, hopefully giving way in the summer to dashing dahlias and cosmos. Spring: sprung.