Today is the first day of meteorological winter. The winter solstice, the shortest day, the darkest night.  It’s natural at this time of year to pause, reflect, and perhaps shed ourselves of that which we no longer need. I’ve been sifting through boxes of old papers, letters and cards, some of which date back to the 1980s and 1990s…the ghosts of years past. Some mementoes I’ll keep, but most have been ditched; it’s so liberating, deciding to let go of the old.

As of tomorrow, we work ourselves back towards the light. When I was younger and less attuned to the natural world, I didn’t realise that although it’s dark now in mid-December, true winter (i.e. the really cold bit) doesn’t tend to get going until January or February. Get outside and you’ll find that there’s still loads of life out there; early daffodil shoots are pushing through, the trees have set their buds ready for spring; the ivy is in full flower and the squirrels are still gathering up their nuts. Yesterday I went to Woodgate Valley Country Park for the first time, a haven of wildlife just a stone’s throw from the M5 – great respite for any city-dweller desperate for some country air. Were it not for the tower blocks in the distance, I could believe myself to be back in the Shire. 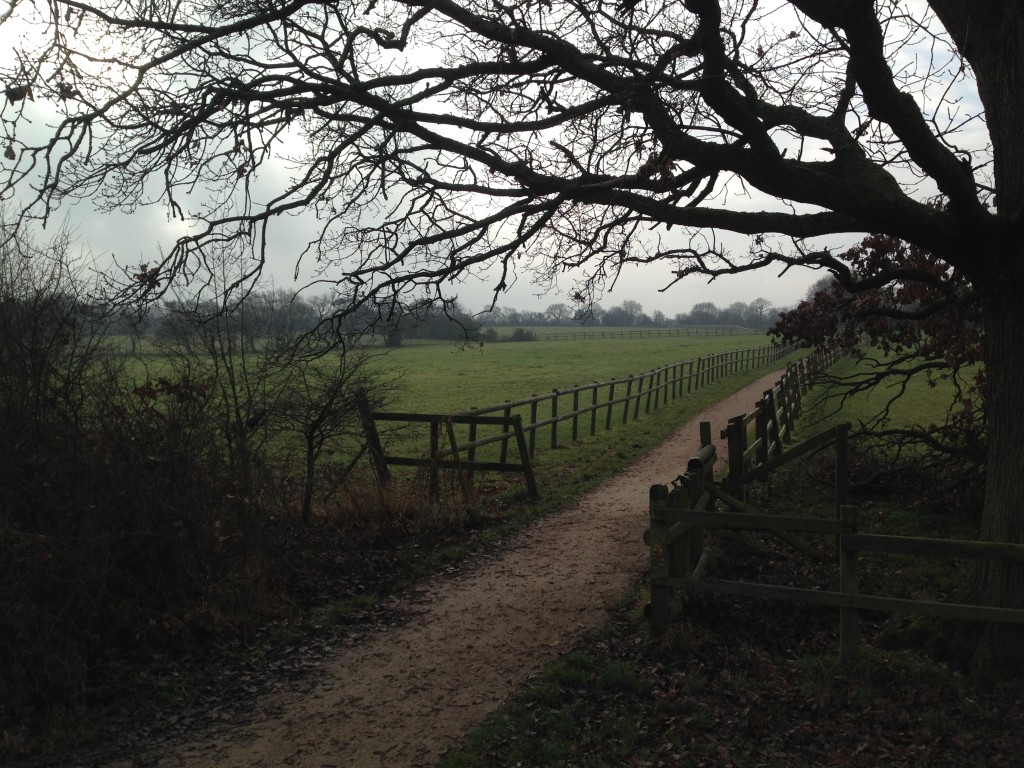 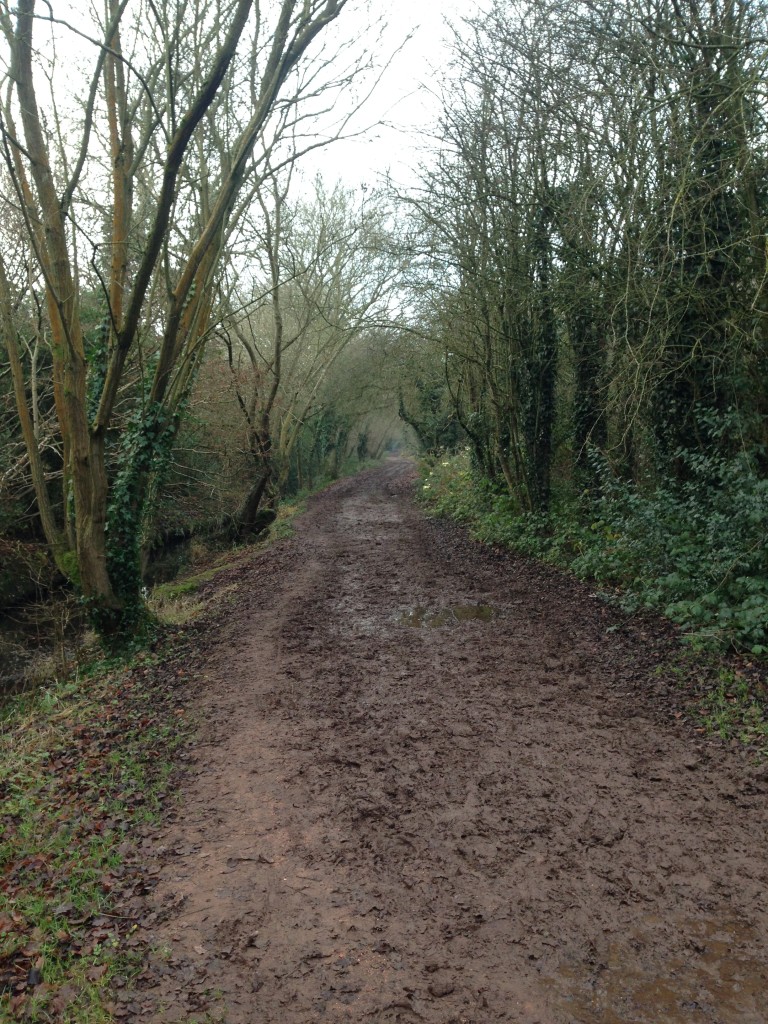 Believe it or not, this is Birmingham! 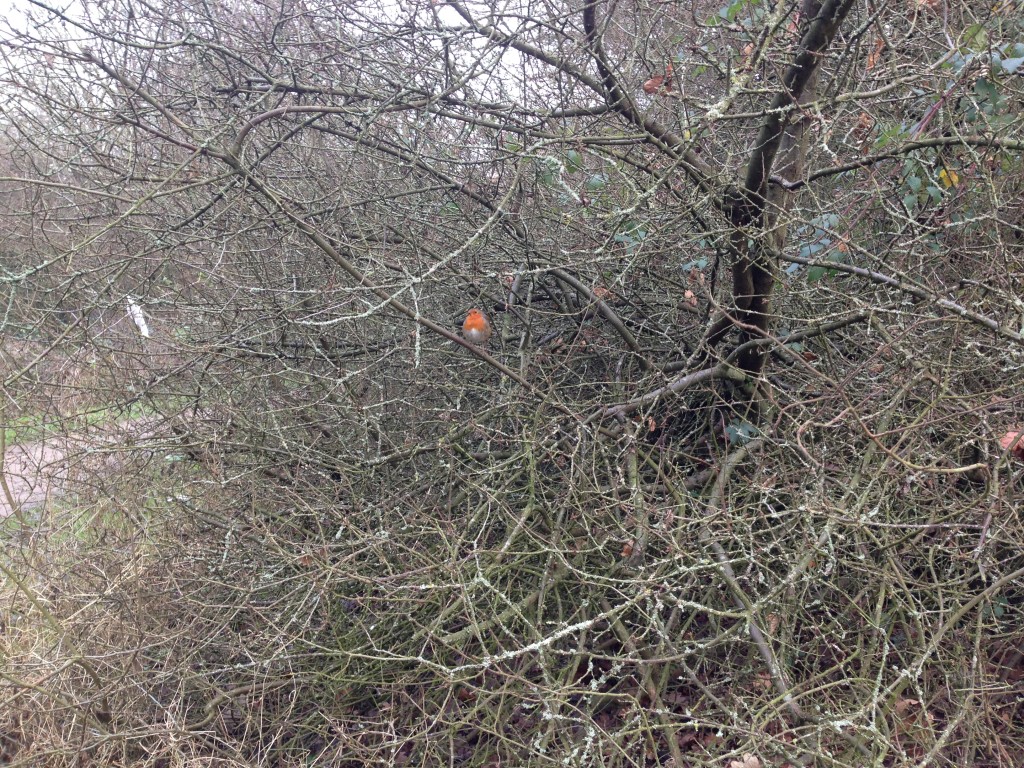 Some ‘old’ things are worth getting rid of, but others should be cherished. If it’s an old recipe, then I’m definitely interested. This dessert is inspired by the 1990s Queen of Christmas, Delia Smith: a squidgy chocolate log filled with a light chestnut cream. Delia’s original uses chocolate mousse and whipped cream, but I’ve swapped the chocolate for some chestnut puree, which feels appropriately seasonal. It’s kind of like a yule log, but without the rich icing; a great way to feed a crowd, or just a greedy couple.

(Note: As is a recent theme, the images on this post are terrible. I blame my dark kitchen. Santa, if you want to bring me some decent lighting for Christmas, that would be marvellous).

First, make the sponge. This is a flourless cake, so it’s super light and squidgy. (It’s just occurred to me that the new phrase for flourless is ‘gluten free’. That phrase hadn’t been invented in the 90s!) First whisk egg yolks with caster sugar until pale and thick, then fold in sifted cocoa powder and stiffly whisked egg whites until the batter is smooth and super light. 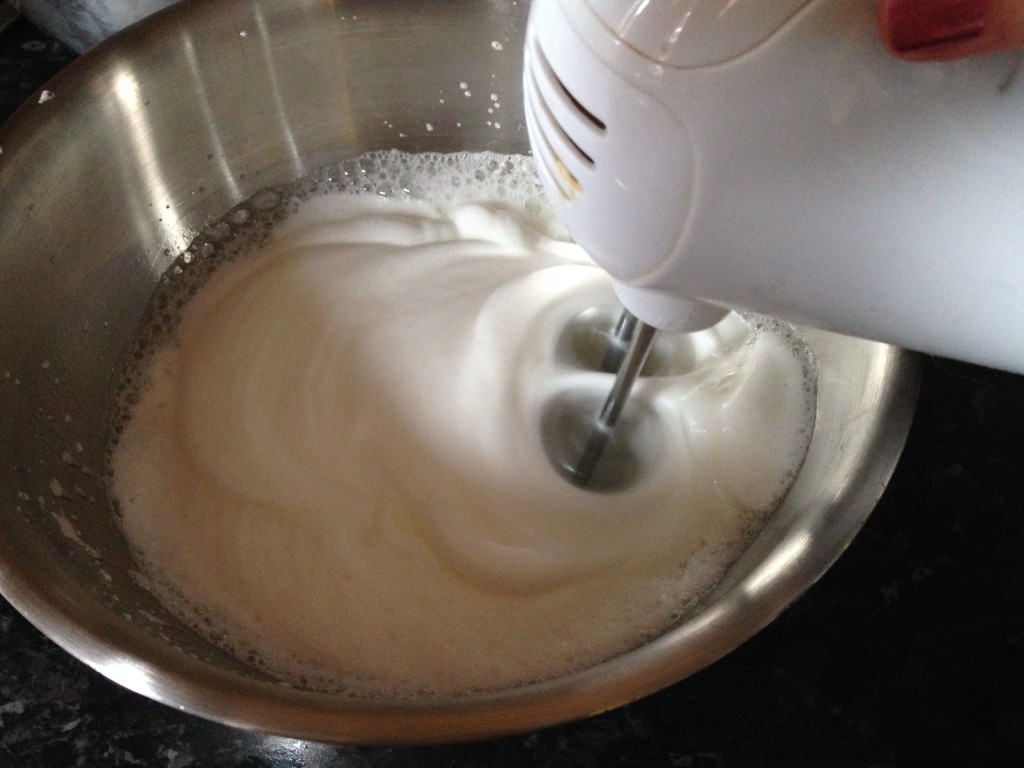 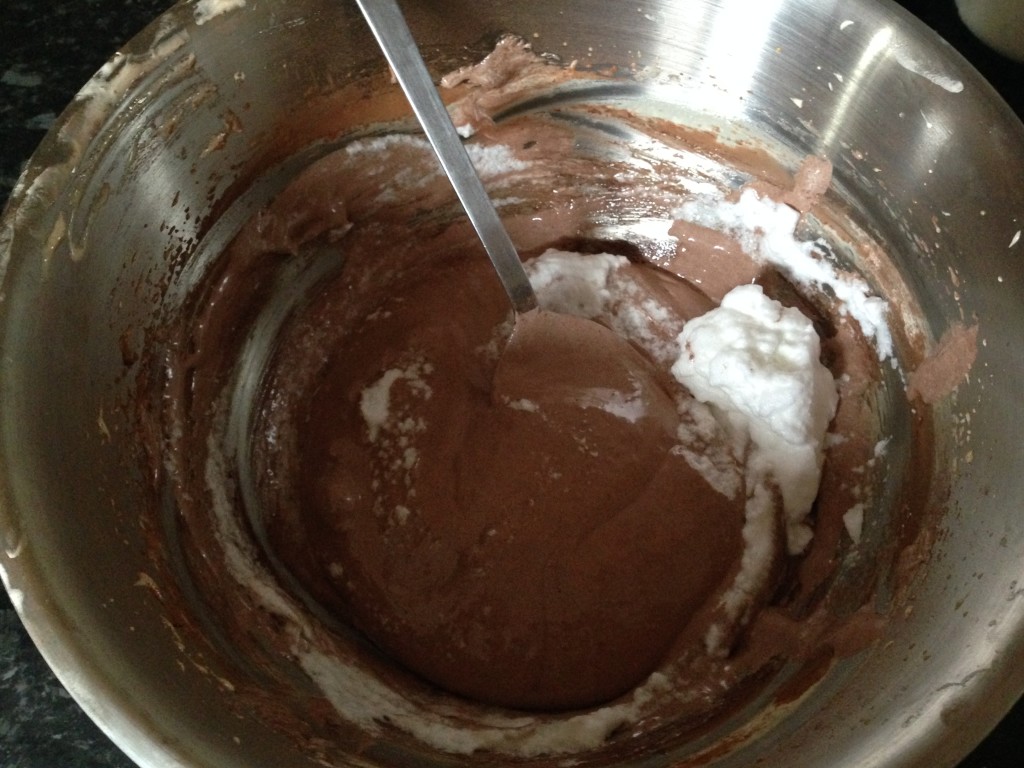 Spread the batter into a prepared swiss-roll tin and bake for about 20 minutes until risen and cooked through, but be careful not to overcook else it will never roll. 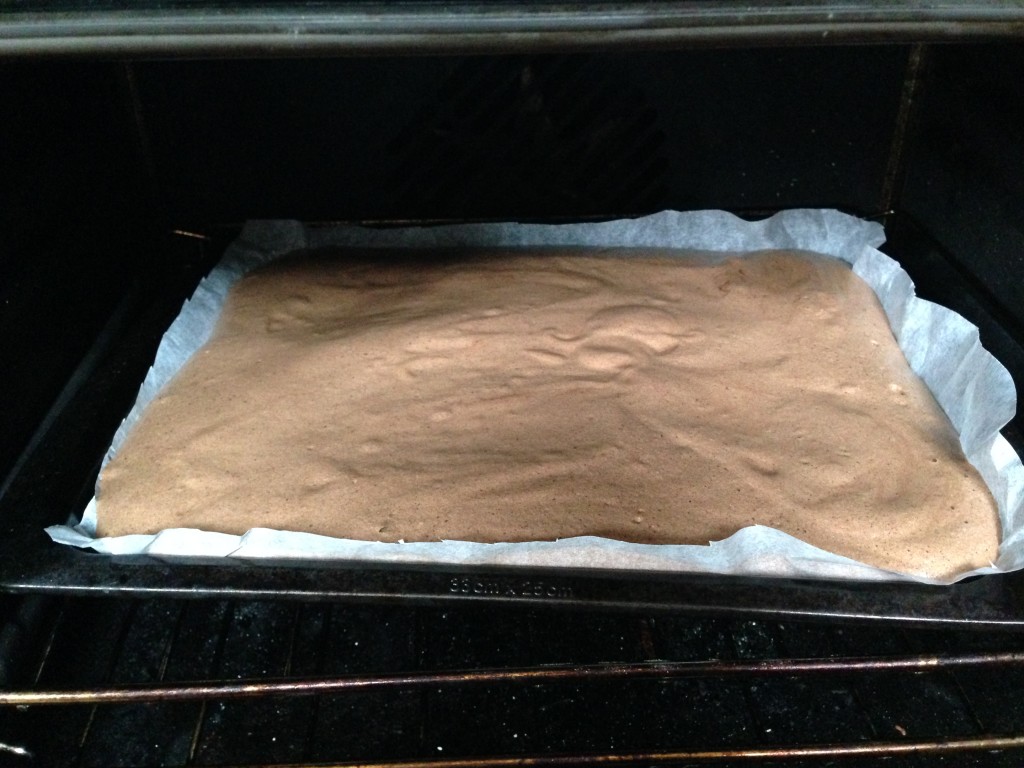 Whilst the sponge is baking, place a piece of baking parchment onto a tea towel, and sprinkle a little caster sugar onto the paper. When the cake is cooked remove from the oven and leave to stand for two minutes, to take the extreme heat away, then tip the cake upside down onto the baking parchment. Whilst the cake is still warm, roll it up from the short side, using the baking parchment and tea towel to help you, then leave to cool on a wire rack. Rolling the cake now makes it easier to re-roll later. It may crack a bit; that’s just the way it is. 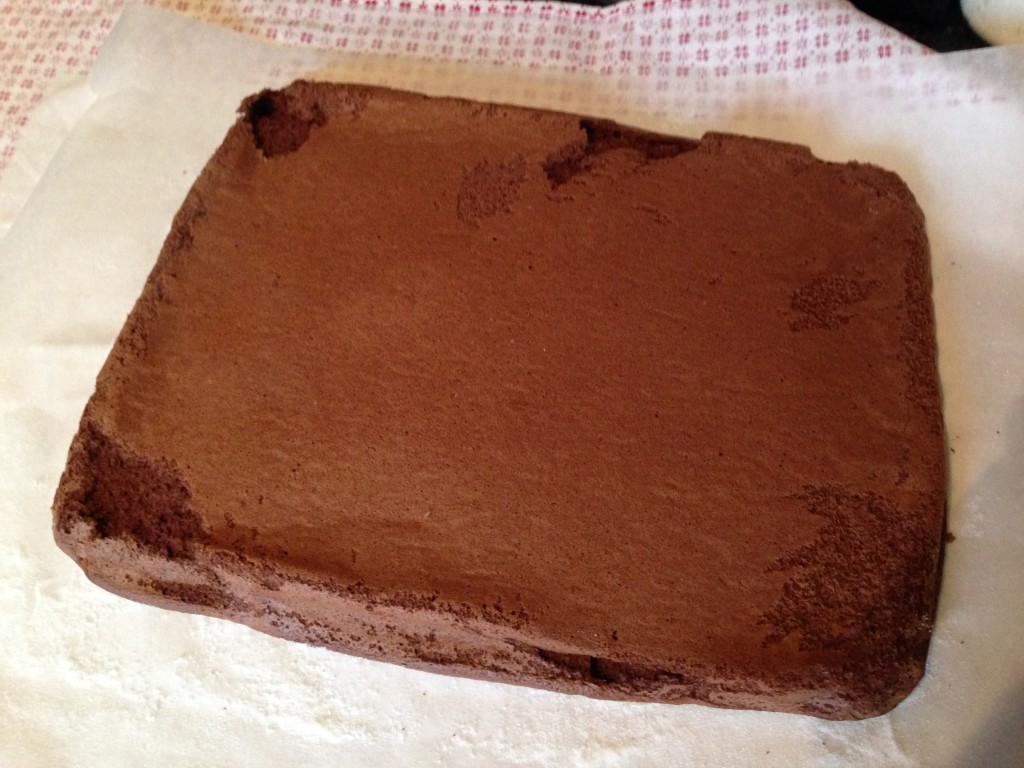 Put the cooked sponge upside down onto sugared baking parchment and a tea towel, roll up and leave to cool

Whilst the cake is cooling, make the filling. Loosen some chestnut puree in a bowl (if you’re using unsweetened puree then you might like to add a little sugar) and whisk some double cream until light and thick. Fold the chestnut into the cream along with a shot of rum (or brandy), then leave in the fridge to chill. 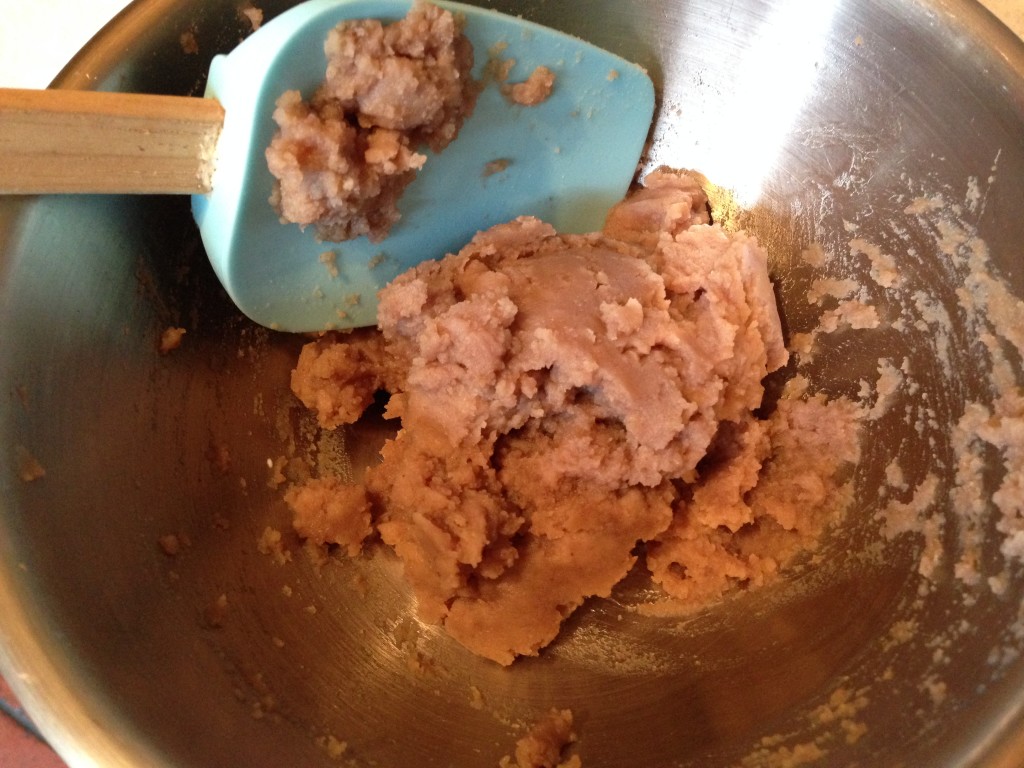 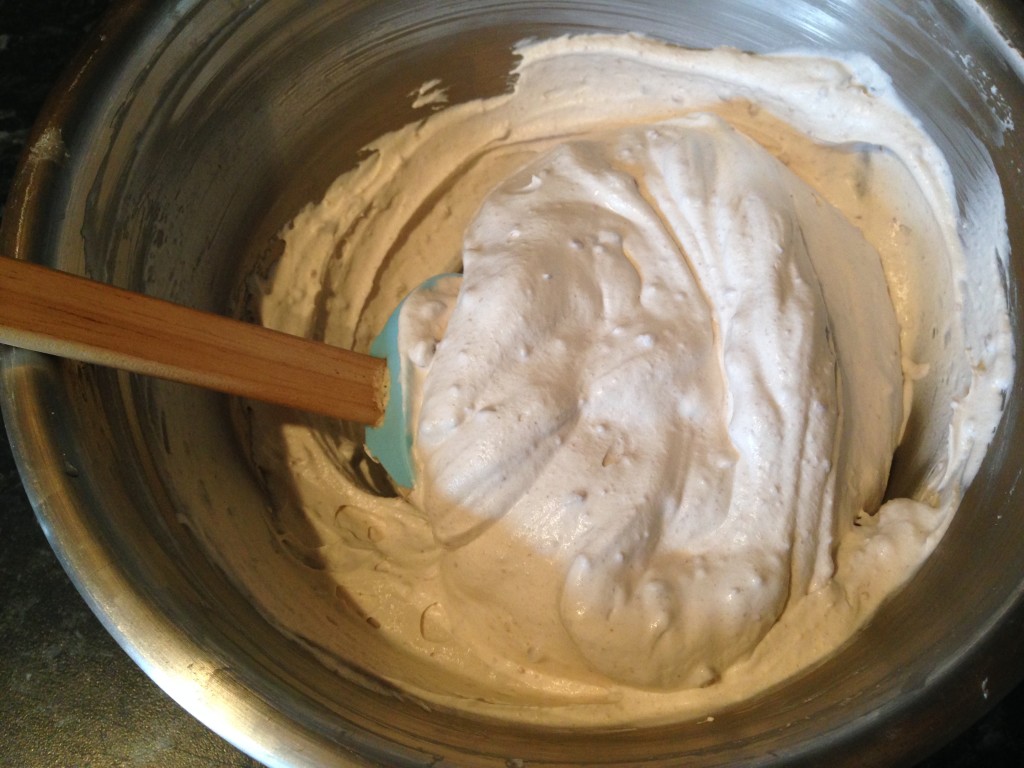 Fold chestnuts into whipped cream with a tot of rum

Finally, finish the cake! Unroll the sponge, and if the ends look scruffy then trip them with a bread knife. Spread the cream mixture on top of the cake, then re-roll as tightly as you can. It you use LOADS of cream like me, it is impossibly to roll it tightly and the cake will be like a cream-filled log. If you go easy on the cream, it will be easy to roll tightly and will look more like a swiss roll…it’s up to you. Pop back in the fridge for a few hours to firm up then serve.

This is an indulgent dessert that manages to not be overtly sweet and cloying. I think is actually gets better the next day, especially with a few raspberries on the side to cut through the richness. Enjoy! 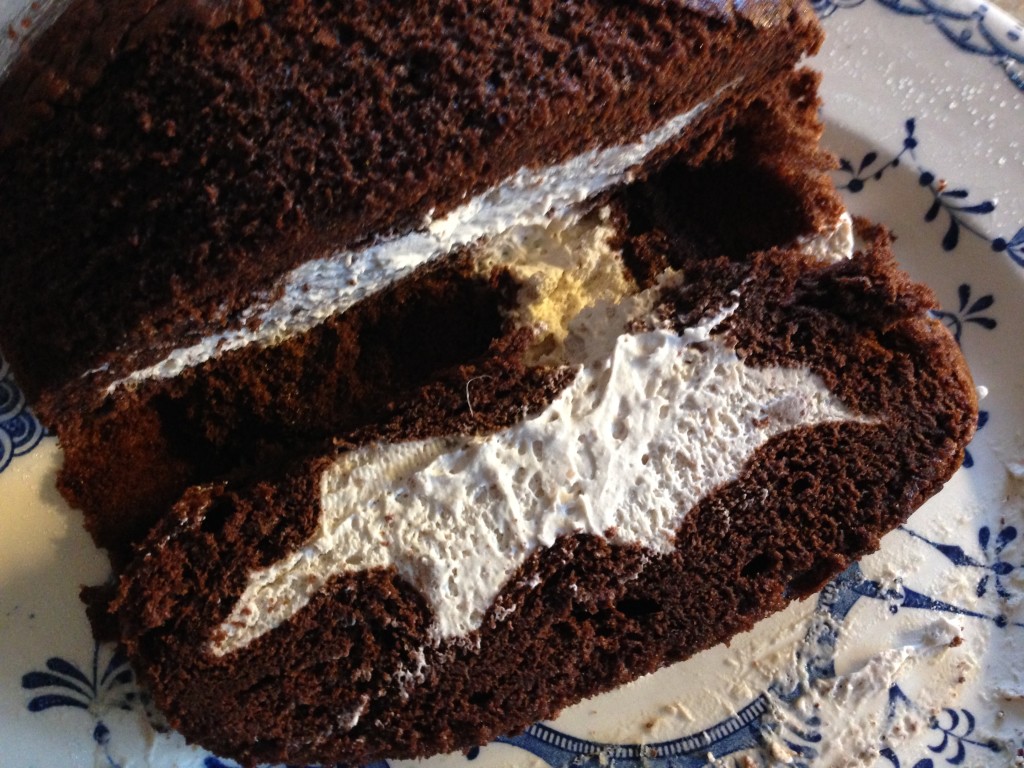 Spread the cream onto the sponge and roll up into a log. Chill for several hours then serve.

50g cocoa (I use Bournville)

Extra caster sugar, for sprinkling and to serve

Pre-heat the oven to 180c. Grease and line a swiss-roll tin. In a large bowl, beat the egg yolks with the caster sugar until thick and light (ribbon stage). Sift the cocoa on top and fold in gently but thoroughly. With a clean whisk and in a separate bowl, whisk the egg whites until stiff. Fold the whites into the yolks; it’s easiest to do this in three stages. Gently spread the cake batter into the tin, level with the spoon or spatula, then bake for 15 to 20 minutes until risen and springy to the touch.

Whilst the cake is baking, place a sheet of baking parchment over a clean tea towel, then sprinkle the paper with caster sugar. Remove the cake from the oven, leave to stand for two minutes, then turn out onto the paper. Roll up from the short end and leave to cool.

Loosen the chestnut puree with a spoon. If using unsweetened chestnuts, add a spoon of sugar until sweetened to your liking. Whisk the cream until thick, then fold into the chestnuts and rum. Place in the fridge to cool.

When the sponge is quite cold, unroll. You may wish to trim the edges of your cake to neaten them. Spread the cake with cream, then roll from the short end as tightly as you can. Place back in the fridge to firm up for several hours, then serve.