Remember those seedlings that I planted out last Saturday? Every last one of them has been nobbled by the slug. Every. Last. One. The ones under gauze are clinging on for survival but the lettuces are decimated. We’ve never had slug issues before; I take it as a personal affront. 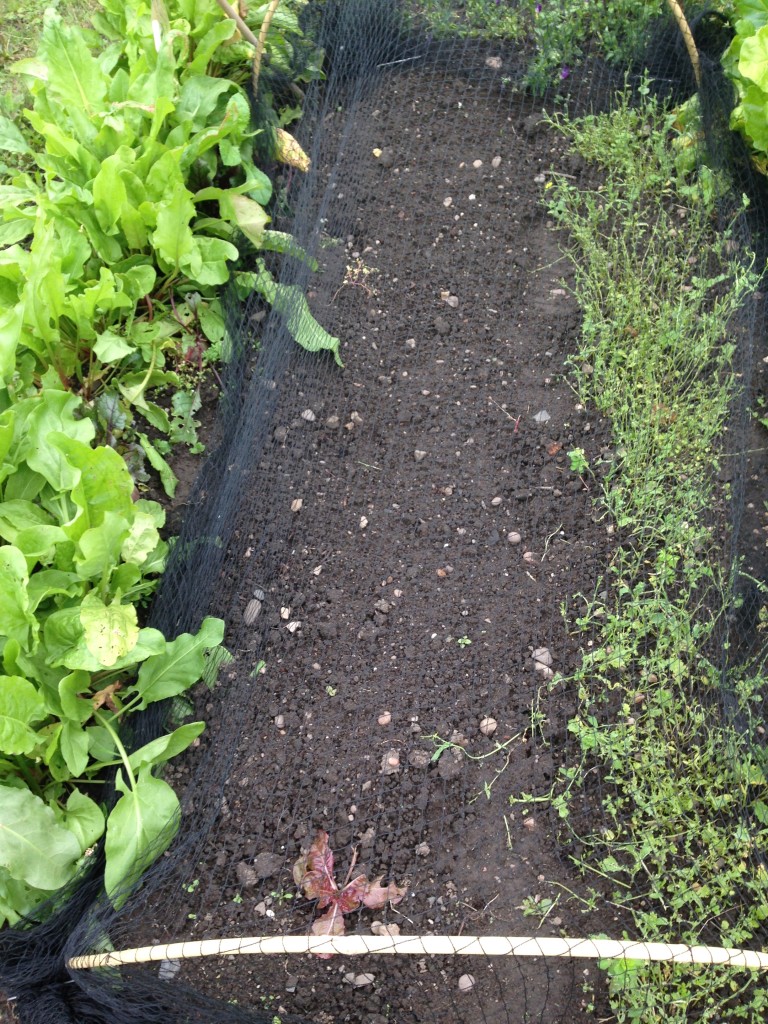 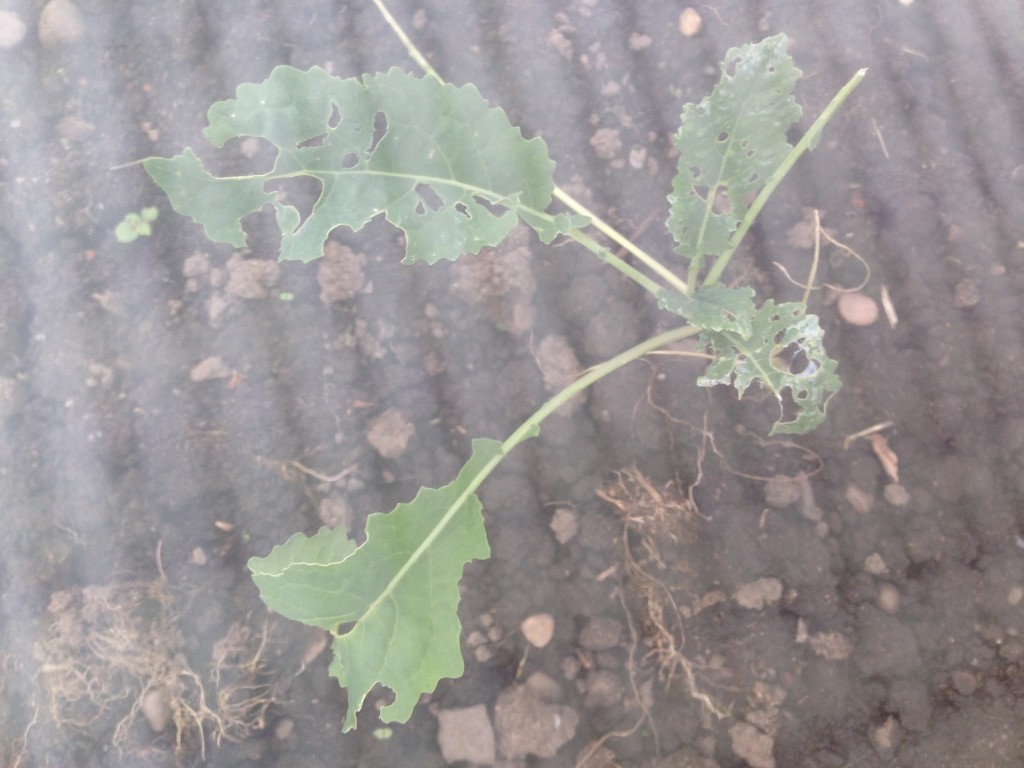 The kale has been nibbled too

So I need to rethink the brassica protection, which is dull and irritating.  Meanwhile the sunflowers are still going strong, shouty and bright and attention seeking. 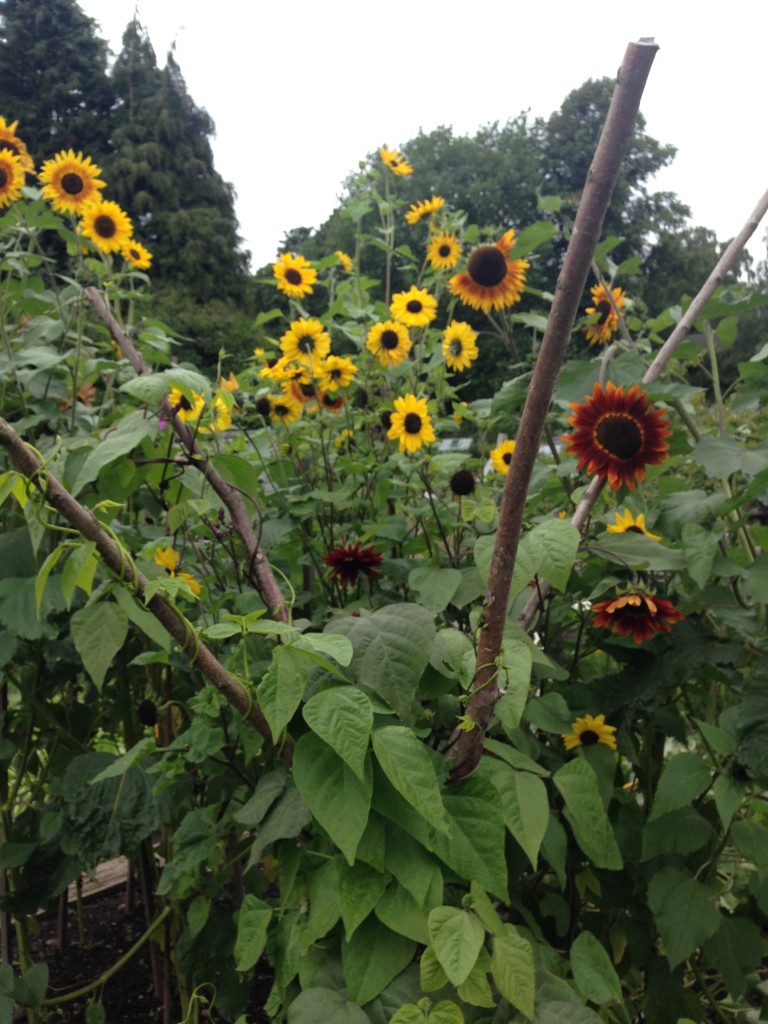 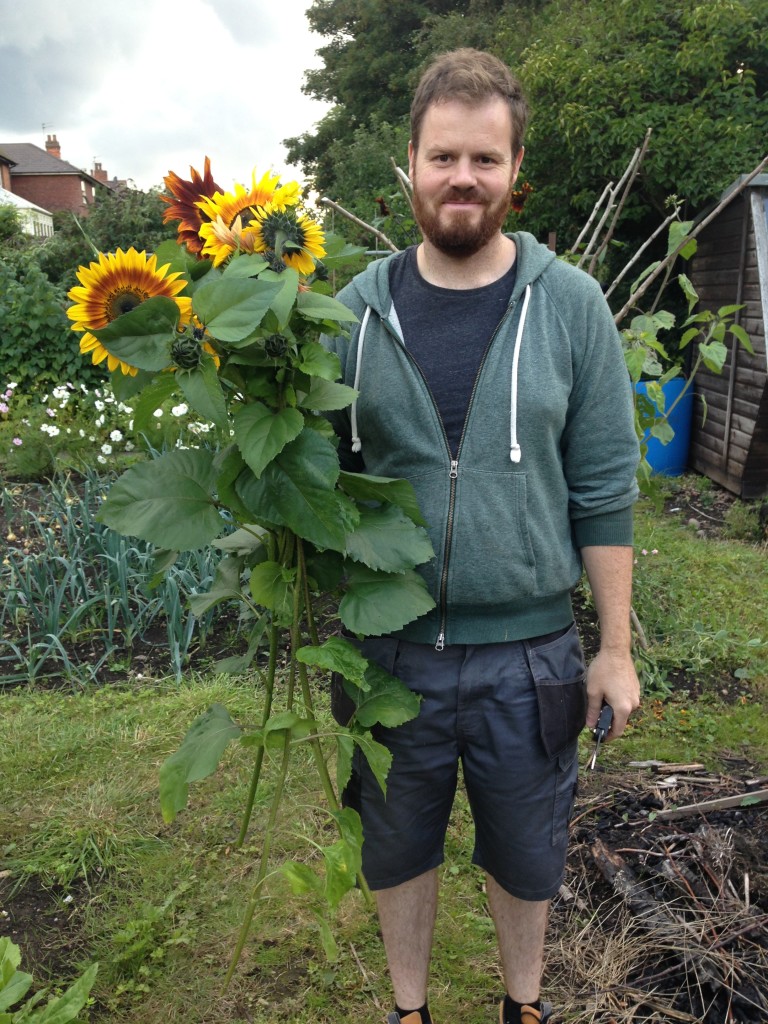 We’re cutting a couple of bunches a week 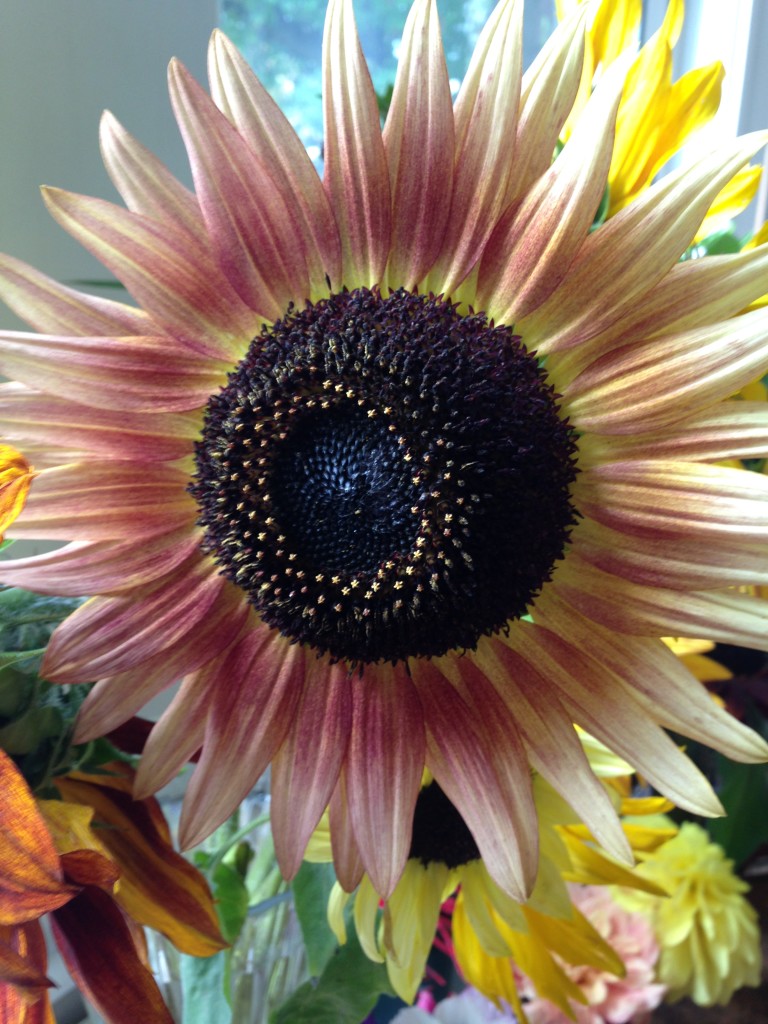 The autumn raspberries are now bearing fruit, a punnet or so a week. Their taste is different to the summer ones, more mellow, less acidic. 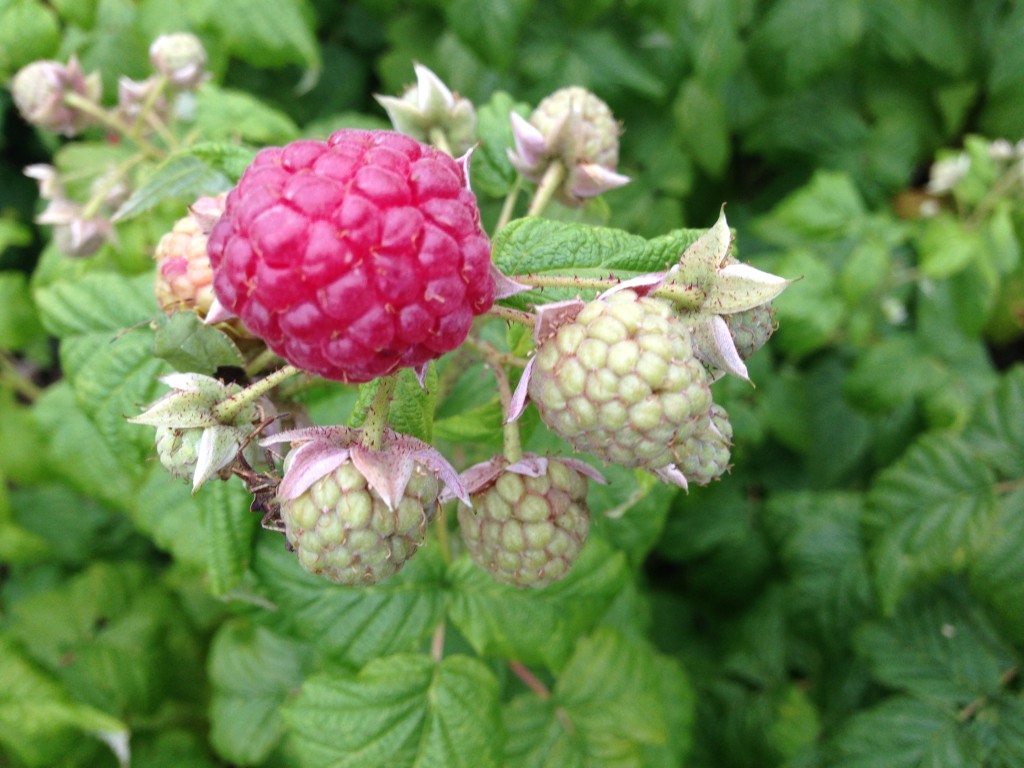 I didn’t blog a single recipe for the whole of august; bowls of lettuce and courgette pasta are perhaps not the most interesting things in the world. But now the weather’s changed, the autumnal produce is coming in, and back to the kitchen I go.

The tomatoes are finally ripening and so the annual passata-making begins. I’ve made three litres this week, all destined for the freezer. It’s so simple: half the tomatoes, drizzle with oil, sprinkle with salt and bake in a low oven for 45 minutes or so, then rub through a sieve. The fiorento tomatoes from my greenhouse make the best passata, they’re the ridged ones you can see in the picture. 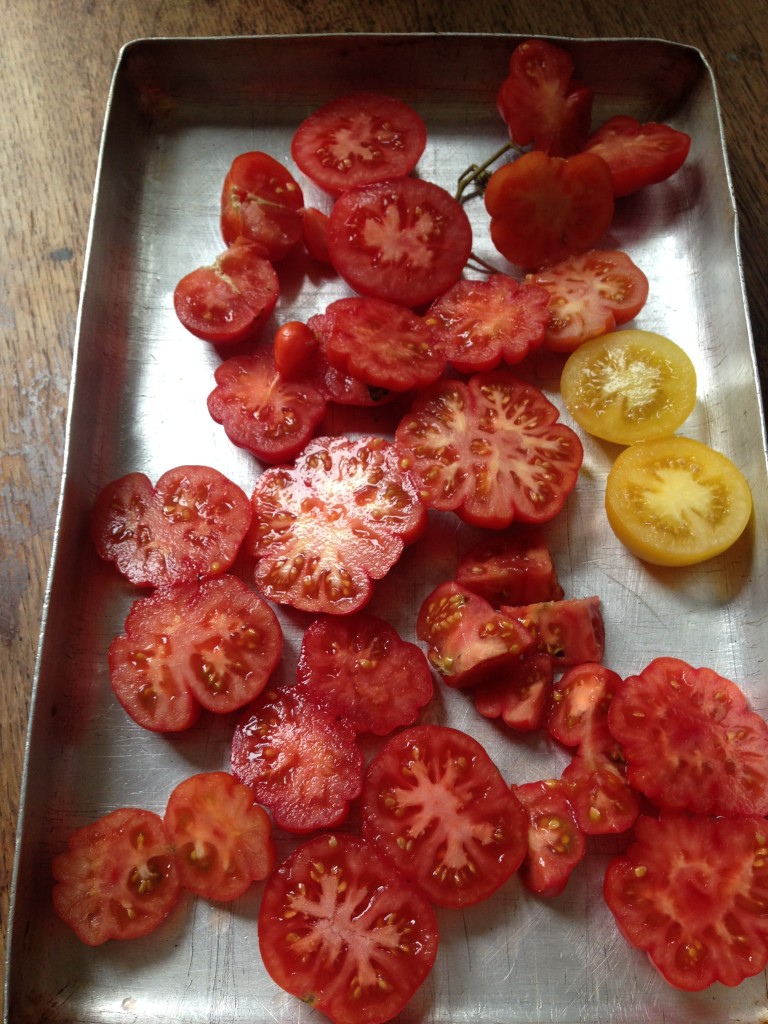 There’s plums too. It’s not chilly enough yet for full-on winter food, so I lightened this plummy crumble up with a few nectarines and blackberries and lots of lemon zest. Sweetened with brown sugar and topped with cinnamon oat crumble, this is possibly the best autumn pud ever, highly recommended. 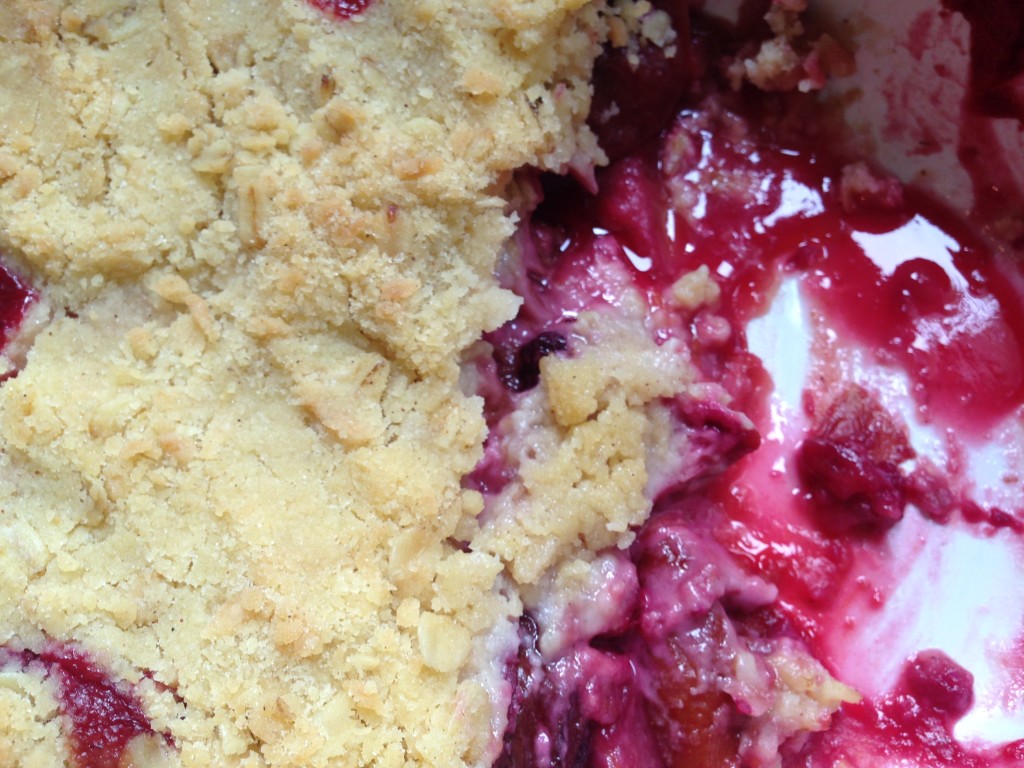 The peppers and chillies are kings of the autumn greenhouse. This lot are from my Mum in Worcestershire, as long as a hand (well, my little girl paw anyway) and gloriously scented. Peppers in the shops don’t have a smell, but a proper fresh pepper is so fragrant that you just HAVE to cook with it. 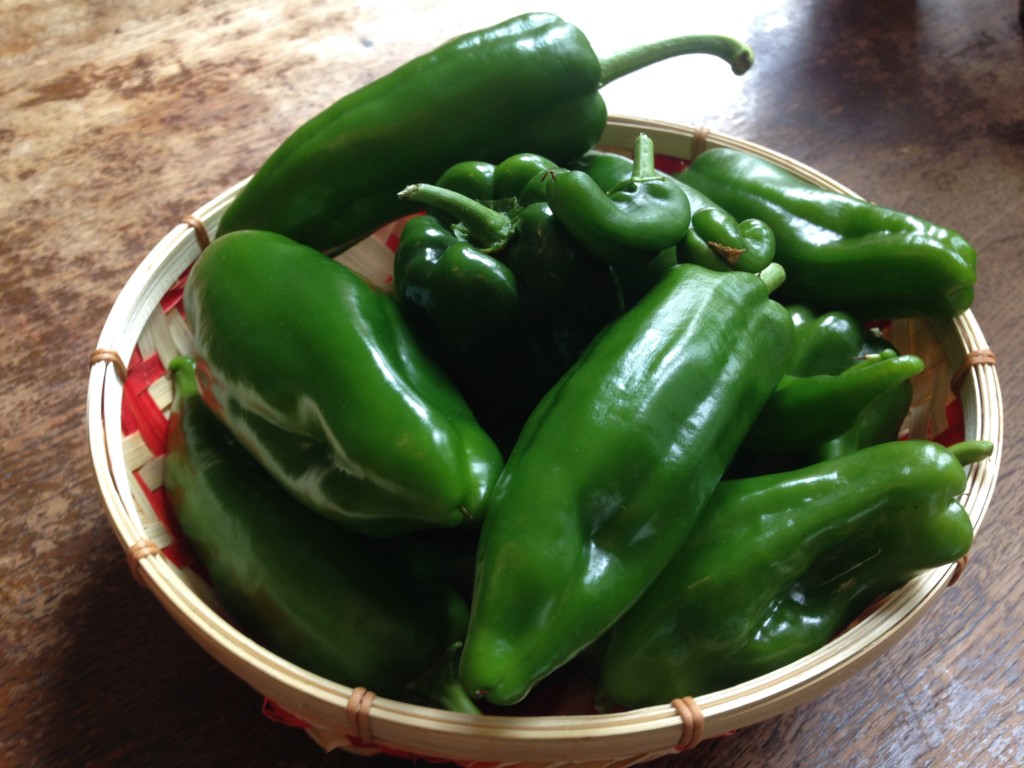 The South Americans have a dish called succotash, which is based on the principle that things that grow together should be cooked together. There, beans are grown up sweetcorn, the length of the cane providing support for the bean vine. It’s all very clever.

Succotash is a mixture of sweetcorn and beans, usually flavoured with chillies and peppers. Sometimes it’s got potatoes in it too, or a bit of pumpkin or squash. Well, I didn’t have any beans, but I did have my own corn and chilli, and Mother’s peppers. Plus my courgettes and Dad’s potatoes, both of which originally hail from South America. I also had some bacon grease leftover from breakfast, which is the pinnacle fat for a hash.

So here is succot-hash, a Thursday-night Birmingham-allotment take on a Mexican classic. Who doesn’t love a hash? You simply fry up spuds, corns, peppers, chilli and courgette in a hot frying pan so they all take on a bit of colour, then season with basil and lime. Easy, seasonal, inexpensive and tasty. 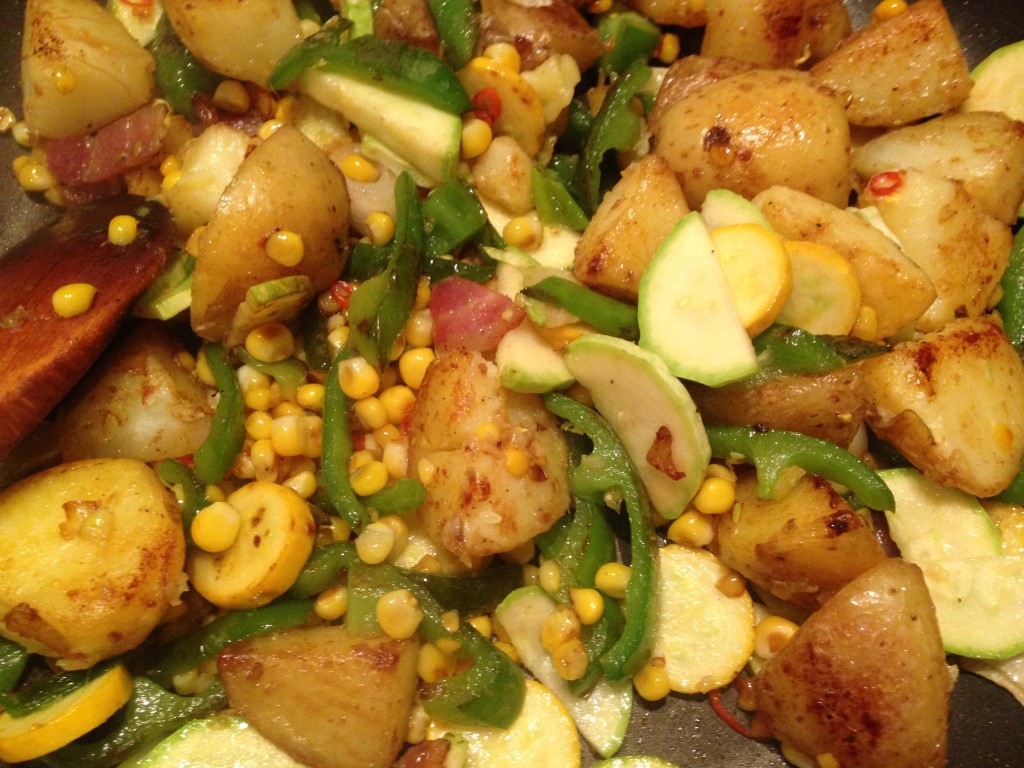 Four potatoes, scrubbed and chopped into large chunks, no need to peel

1 ear of corn, kernels removed with a sharp knife

bacon grease, for frying (or olive oil or butter)

Boil up the potatoes until cooked, drain, then leave to steam and cool. In a heavy-based pan, warm the bacon grease, butter or oil until sizzling, then tip in the potatoes. Fry for five minutes or so until starting to brown. Add the peppers and corns, fry for another five minutes over a mid- to-high heat. You want little caramelised bits on the corn, so don’t be scared to use a bit of heat. Add the chilli and finally add the courgettes. Cook until the courgettes are softened, tossing the pan several times to get an even colour. Season. Finish with torn basil for fragrance and colour and a squeeze of lime, if liked.

I served this with Mexican-style chicken, green salad leaves and a dollop of sour cream.