We have friends coming for supper this evening. Supper used to be called dinner, and before that was called tea. Now it’s called ‘using up things from the veg patch’.

For my birthday in June Other Half bought me a fantastic book, Caroline Conran’s Sud de France. 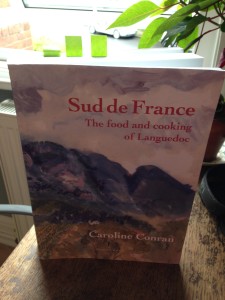 It’s a recipe journal/memoir of life living around La Laviniere and Saint Chinian, towns in the Launduedoc where I’ve been fortunate enough to visit and enjoy memorable food. And wine. Don’t forget the wine. So a French supper it is; a good excuse to do some proper cooking.

Tomato and taleggio tart: First up, I know that taleggio isn’t French, but you work with what you’ve got, and I’ve got taleggio. I halved 12 of our tomatoes and cooked them in a slow oven (160c) for about an hour with thyme, bay and EVOO. Then rolled out puff pastry, arranged the tomatoes on top with more herbs, baked for about 30 mins (180c) before adding slices of taleggio to the top and popping back in the oven to get the desired ooze.

Mayonnaise: I’ve been hankering about making some mayo for weeks and given the meringues (see below) there were egg yolks going. I used Conran’s Sud de France recipe: Whizzed two yolks up with 1tsp dijon mustard, 2tsp lemon juice and sea salt, then dripped in 250ml of light olive oil and sunflower oil, half and half. Dripped is the only word for it – mayo is simple but you have to take it STEADY. It takes about 5 minutes to get it all lovely, thick and gloopy. Added a bit more lemon at the end…love the lemon.

Served these with this morning’s bread, and leaves and beans.

Then Conran’s raspberry swirl meringues with more fruit and cream. The meringues were interesting:

Cook 100g raspberries with 30g sugar until jammy. So far so normal. But the meringue itself is oddball: whisk 4 egg whites until stiff, gradually beat in 120g caster sugar and then 110g icing sugar (???), 1tsp cornflour and 1tsp white wine vinegar.

Swirl the raspberry with the meringue, spoon onto the prepared trays. Conran says bake at 125c but I’m always dubious about meringue temperatures so reduced this to 110c. Left them in for 1 hr 30 mins – at which point they had to come out as the bread needed baking, and when it’s got to be baked it’s got to be baked. So an hour later I put them back in for thirty mins then left them to sit in the cooling switched off oven.

Verdict on those meringues….scrumptious. Meant to take pictures but we opened a good bottle and I clean forgot until it got dark and the light was terrible. In real life they weren’t quite as pink. 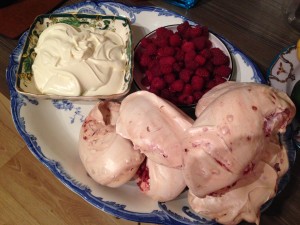 A platter of joy