My Dad is of a particular generation. Brought up in post-war countryside austerity, all rationing and hard graft, but with lots of space at his disposal (at the last count: four garages, one caravan port, two sheds, two lofts) he is of the ‘It’ll come in useful one day’ school of thinking. Nothing gets chucked out. I have told him that he needs to sort out all his stuff before he pops his clogs, as like buggery am I going to do it.

However. It is onion pulling time and Monty Don tells us that we need to dry them on some kind of rack. I don’t own an onion drying rack, oddly enough. So my Dad spies an opportunity to get out his woodworking kit and before you know it, we have a piece of garden apparatus that is so large the only means of transportation is in Mother’s Berlingo (aka the Pope Mobile).

The chicken wire was last used when my brother was learning to play cricket as a boy; it stopped the windows from being smashed. My brother is now 41. And so the chicken wire has indeed come in useful one day.

The onion rack in full glory

About these onions. They were planted in sets over the May bank holiday, which apparently is quite late (we bought them on sale). I think they’ve done a good job. 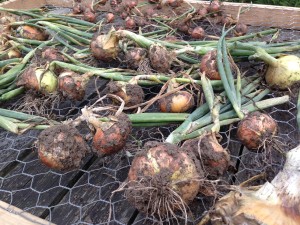 I’ve been asking Matt nicely for the last few days to pull them up, as I want the space. My current thinking is about a year-round-harvest. It’s all well and good harvesting every day of the week from July to September, but what of the rest of the year? Autumn is covered(ish) with cavalo nero, corn, squash, leeks and parsnip. But a girl needs greens, and so in goes more spinach, chard, cima di rapa and spring onions. 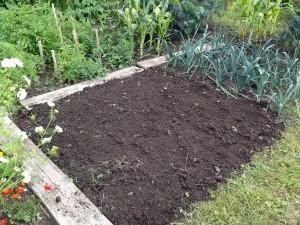 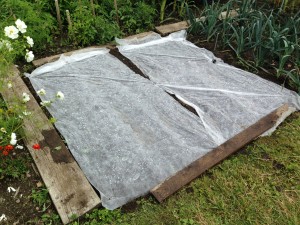 The fennel that I put in two (?) weeks ago has – I think – germinated. It’s not always easy to work out what is seedling and what is weedling.

The dahlias and cosmos look amazing.