The lawn is confettied with golden leaves and the seed heads are helicoptering down from our neighbour’s tree. There’s no denying that autumn is here – though the air is still warm, days are marked with wind and drizzle. After the brief summer of shorts-and-t-shirts, I’m back to wearing two jumpers and ancient socks. It’s OK. August was so busy, and September rather trying, so a slow October is called for. I think I always go through a mourning period at this time of year, in denial that summer (and with it all that LIFE!) has gone. There’s a few weeks of learning to let go, and more so this year because school starting was such a shock to our normal way of doing things.

Having said all that, it’s not winter yet, not that you’d know it from a trip to the supermarket. Waitrose is already flogging Lindt Santas, and guess what’s made its yearly appearance in our kitchen, a good month earlier than normal. Aldi stollen and panettone – staple winter carbs in our house – are back. I welcome them with open arms.

This warm-yet-autumnal weather means it’s time to harvest the squash. This year I planted out 10 plants of a few varieties – an ornamental gourd mix, a few crown prince, a few black fatsu, and a few pumpkin. The fatsu disappeared without trace, but the gourds thrived. This week I harvested a box full, plus a few crown prince and a fat halloween pumpkin. Given the hot dry weather in August, and the general neglect that I expect all my allotment plants to tolerate, it’s a good haul.

Of course the flowers are still coming, the dahlias in particular enjoying the recent wet. Cosmos are hanging on, and the chrysanthemums are now thinking about putting on a show. The colour of late September and early October is magenta, with the amaranth, cosmos and dahlias making a striking contrast with the borlotti beans and autumn raspberries.

The hops are past harvesting for beer now but I’ve taken a few strands for drying, for Christmas displays. Their soporific scent fills the sunroom.

A word of note for the sunflowers, which struggled to get going this year but come September claimed their magnificence. All of these are the side shoots from one single plant, which sadly got blown down in last week’s high winds. It’s decline warns me that it’s time to get tidying up, clearing away the summer debris before the cold comes, but I can’t quite find the energy just yet.

I’m hankering after ‘proper’ food again. Slow cooking, big flavours, made from an hour or two pottering in the kitchen. A few weeks back we were having grilled sardines with tomatoes, but now we’ve tipped to autumn bowl food. Last weekend we made a monkfish curry with a Goan recheado spice paste. And this week I want something from closer to home: beef in beer it is. You can veer to the Belgian-style Carbonnade if you want to with the addition of mustard and juniper, but I keep it plainly Anglo-Saxon: beef, beer, onions, mushrooms and stock are all that you need. Cook it low and slow, and float a few dumplings on the top to finish.

In a heavy-bottomed casserole, heat the oil and fry the onions with a large pinch of salt on a low heat until very soft and slightly golden. Don’t rush this stage. It can take up to 30 minutes to get there, and it’s important for both flavour and texture of your casserole that they are very soft and very sweet. Give them a stir every now and then to ensure they don’t catch.

Meanwhile, pile the mushrooms in a dry heavy-bottomed frying pan on a medium heat. Cook for 10 minutes or so, turning every now and then, until golden and most of the moisture has evaporated. I don’t add any oil to the pan, as I don’t think it needs it – just ensure they get a stir to prevent burning or sticking. When they’re done, add them to the onions.

In the same pan as you cooked the mushrooms, dry-fry the meat cubes in batches until browned. Again, I don’t add oil here, as if you’ve got a good heavy pan they’ll cook just fine without it, and there’s less of a clearing up job later. Once browned, tip the meat into the casserole with the onions.

Deglaze the pan with about 400ml of boiling water, and add the stock cubes to dissolve. Set aside for a minute or two.

Now attention goes back to the onions. Stir in the flour, tomato puree, thyme, sugar and a good grind of pepper, and cook on a medium heat for a minute or two until the mixture is well combined. The idea is to cook the tomato and flour out a little to remove their raw taste. Now tip in the beer, and give it a good stir. Bring to the simmer. Add the beef stock from your frying pan, and again stir together.

Pop the lid on and stick it in the oven for about two hours, until the meat is yielding. Taste and adjust the seasoning if it needs it (you may need more salt, pepper or sugar). If it’s too wet, leave the lid off and pop back in the oven for 20 minutes or so to reduce down. Serve, or leave to go cold and reheat the next day, when it will be even better.

If you want dumplings – and why wouldn’t you – simply toss together 4oz self-raising flour with 2oz suet and a pinch of salt, then add a few spoonfuls of cold water to bring to a dough. Shape into balls and pop onto the top of the stew before returning to the oven for 20 minutes or so to cook. Lid off or on, depending on if you like your dumplings wet or crunchy.

Nb. I like measuring my dumplings in ounces rather than grams, as it gives rise to the feeling of being homely and traditional. That, plus I find the 4/2 ratio much easier to remember.

Also in the allotment/garden: Trimmed the shrubs, a job that should have been done in spring. Thinking about tidying the allotment and can’t quite find the energy, time or motivation to do it. Thinned autumn-sown annuals. Drying hops and borlotti beans.

Cooking and eating: Monkfish curry, crispy cakes, raspberry and chocolate sponge, sausage ragu, apples, pears, still a bowl of tomatoes on the side.

Also: Started the RHS Level 2 course in Principles of Plant Growth and Propogation at Winterbourne House at the University of Birmingham. Reading the Tucci Table, because Stanley Tucci is a God amongst men.

Slow-cooking comes into its own at this time of year. The days are grey, damp and overcast, and the need for nourishment goes right to the bone. The problem with stews, however, is that they can get a bit….samey. So when I was flicking through Claudia Roden’s compendium of recipes from the Middle East, Tamarind & Saffron, this Moroccan dish of lamb with quince caught my eye. Incredibly simple, yet compellingly exotic, it comprises merely onions, meat, ground ginger, saffron, quince, cinnamon and honey. I had a shoulder of mutton in the freezer, quince in the fruit bowl, and a taste for something new. And lo! A new favourite is born.

A word on quince: they are in season right now. I picked mine up from the vegetable stand in Ludlow market, but I’ve seen them in Middle Eastern grocery shops in Bearwood and on the Hagley Road in Birmingham. Quince is a difficult flavour to pin down. Raw, they are rock hard and inedible, but cooked with sugar they become fragrant and delicately pink in colour. In this dish they give a sour note that offsets the rich mutton, not unlike how the sharp acidity of apple cuts through a fatty cut of pork. If no quince are to be had, this dish would probably work with apple.

Note: the photography in this post is terrible, the low levels of November light having beaten my iPhone.

First, prep your meat and onions. I boned the mutton shoulder, removed the excess fat and diced the meat. The onions are simply sliced. The only spices that are needed are ground ginger and saffron. 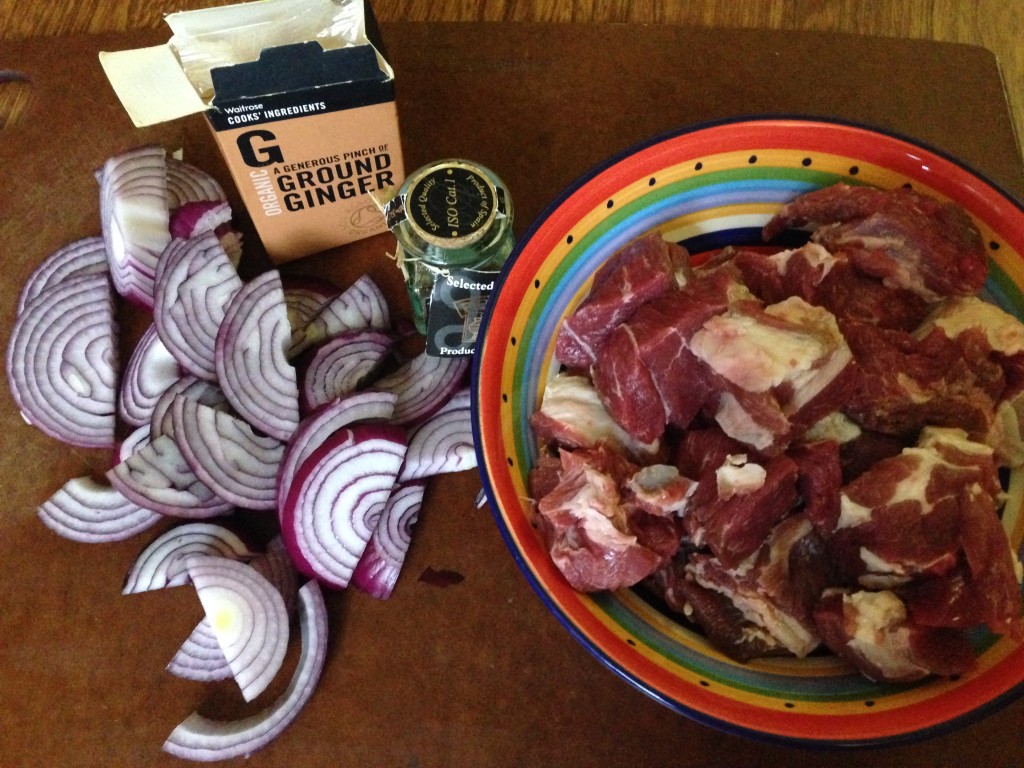 Slice some onions, dice the mutton and have ginger and saffron ready

Heat some oil in a tagine or casserole dish, soften the onions over a medium heat for a few minutes, then tip in the meat. Cook for five minutes, then add a teaspoon of ground ginger, pinch of saffron, salt and a fair amount of black pepper. We are not really browning the meat here as we would for a European-style stew; it’s more about softening the onions and getting some heat into the lamb. Then add water to cover, pop the lid on, and cook for two hours or so until the meat is totally tender. 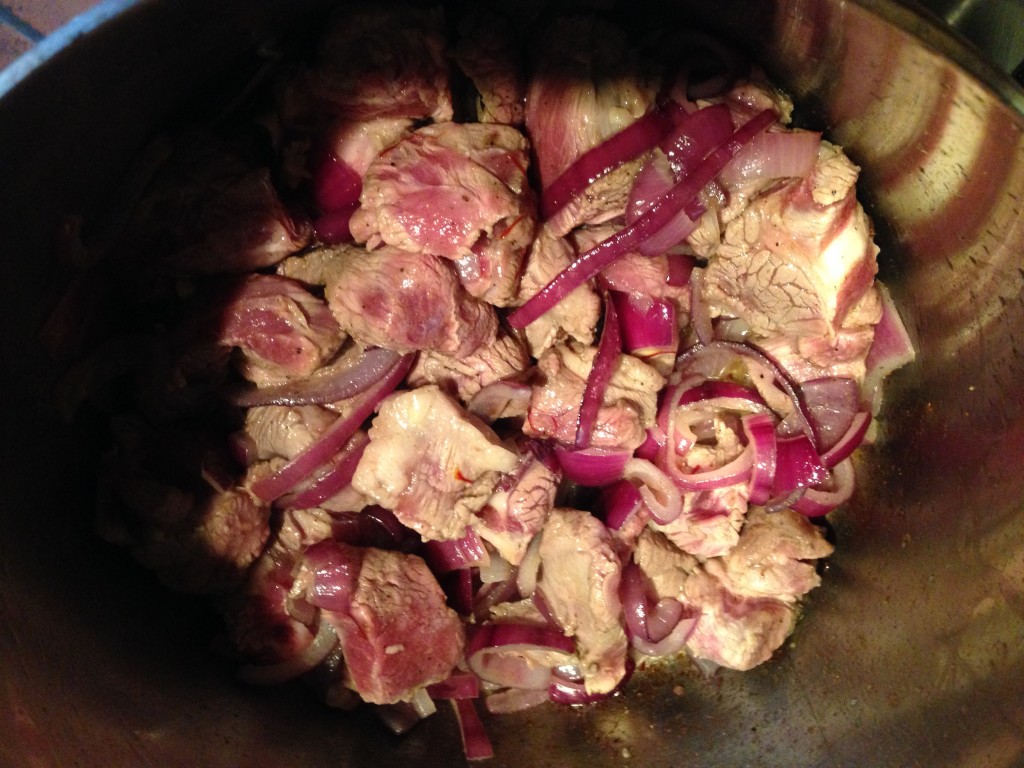 Then it’s time to attack the quince. Using a heavy knife, for they are as hard as a squash, quarter the quince and tip them straight into boiling water to which you had added the juice of half a lemon. 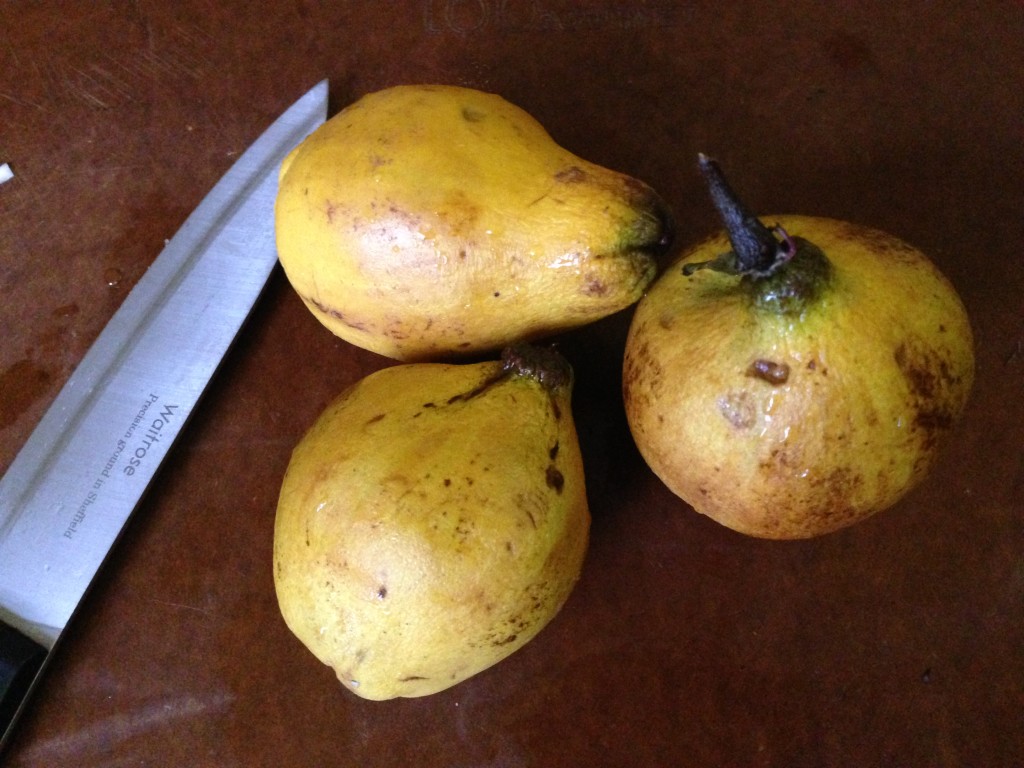 Quince, the mysterious & exotic star of the show

Simmer the quince until soft – mine took ten minutes but they can take up to thirty, so just keep an eye on them and test regularly (if the quince are overcooked they will collapse). Drain the quince and once they are cool, remove the cores and dice into chunks, keeping the skins intact. 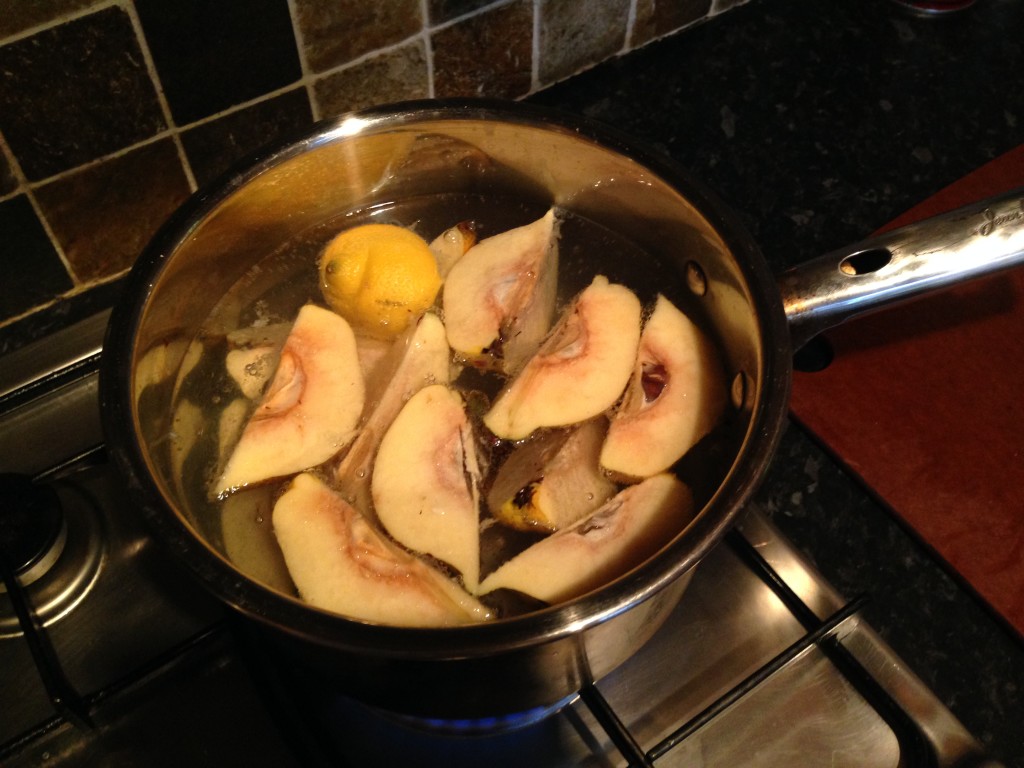 Simmer quince in lemon-water until soft, then core and dice

This stew is a revelation. How can something so simple be so nourishingly delicious? The onions collapse down to make a thickish sauce, with the faintest hint of fragrant spice. It feels like real, honest peasant cooking, albeit from a different time and continent. We had ours with couscous and a simple salad of grated carrot, sliced mint, toasted almonds, feta and lemon. With apologies for this terrible photograph: serve the finished stew with a refreshing carrot salad

Mutton (or lamb) with quince

1kg shoulder of mutton (or lamb)

Bone the meat and dice into chunks, removing any excess fat. Slice the onions. Heat the oil in a tagine or stew pot, then soften the onions for a few minutes. Tip in the meat, salt, pepper, ginger and saffron, and cook for a few more minutes until the onions are soft. Tip in water to cover, pop the lid back on, and leave to cook on a low heat for 1 1/2 hours or until the meat is tender. Add water if it becomes too dry.

Prep the quince: Have ready a pan of boiling water with the juice of half a lemon. Cut the quince into quarters then tip them straight into the water. Simmer until soft – this can take 10 minutes or 30, so test regularly. Drain then remove the cores and dice into large-ish chunks, leaving the skins on.

When the meat is tender, remove the lid to reduce the sauce. Spoon off any excess fat. Add the quince to the meat with the cinnamon and 1 tablespoon of honey, cook for a further five minutes. Add more honey or lemon juice to taste, then serve.