On Friday we wiled away a few hours at Grand Union, the exhibition space and artists’ studios in Digbeth. If you don’t know, Digbeth is where Birmingham’s trendies hang out and it’s also home to the most exciting visual artists in the city. Despite being most definitely NOT a trendy I am lucky enough to work with some of these folks every so often. Friday was a new adventure for Grand Union, an evening of food inspired by the artists who call it home. GU’s current exhibition by Fay Nicolson does a lot with colour and structure. It inspired the first dish of the evening, a plate called Texture & Colour, with beetroot meringue, needles of spruce and labneh, which is a kind of strained Greek yoghurt. 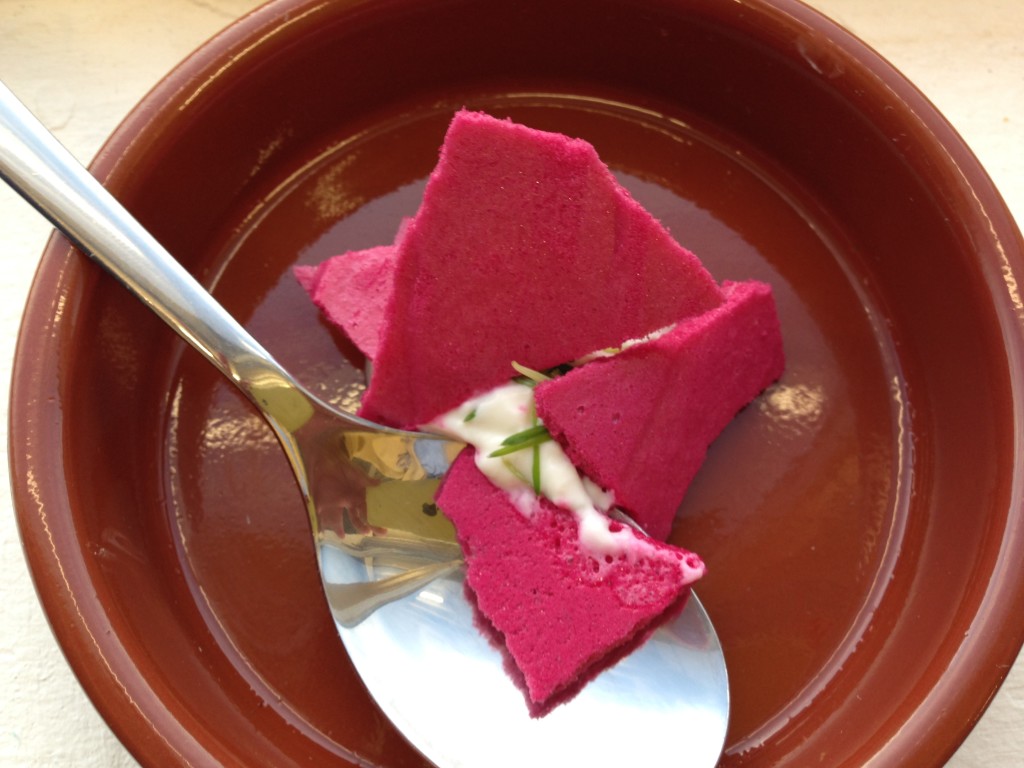 Then is was down to the artists’ studios starting with BAZ. Artist Matt Westbrook makes work inspired by Birmingham, and not just Brum but all the Birminghams around the world. Birmingham Alabama is dubbed The Magic City (the bag so ably modelled by Kim above is his design). So in a plate called The Many Birminghams of the World, we ate food inspired by America’s deep south – crab, succotash, sweetcorn. 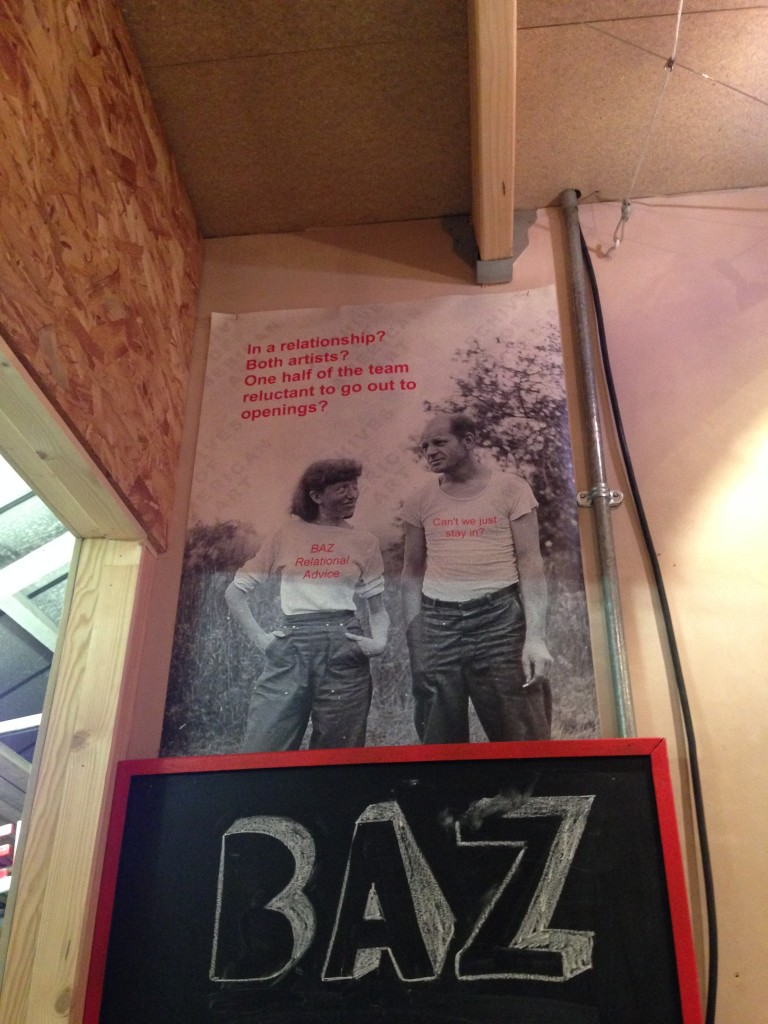 Inside the BAZ studio 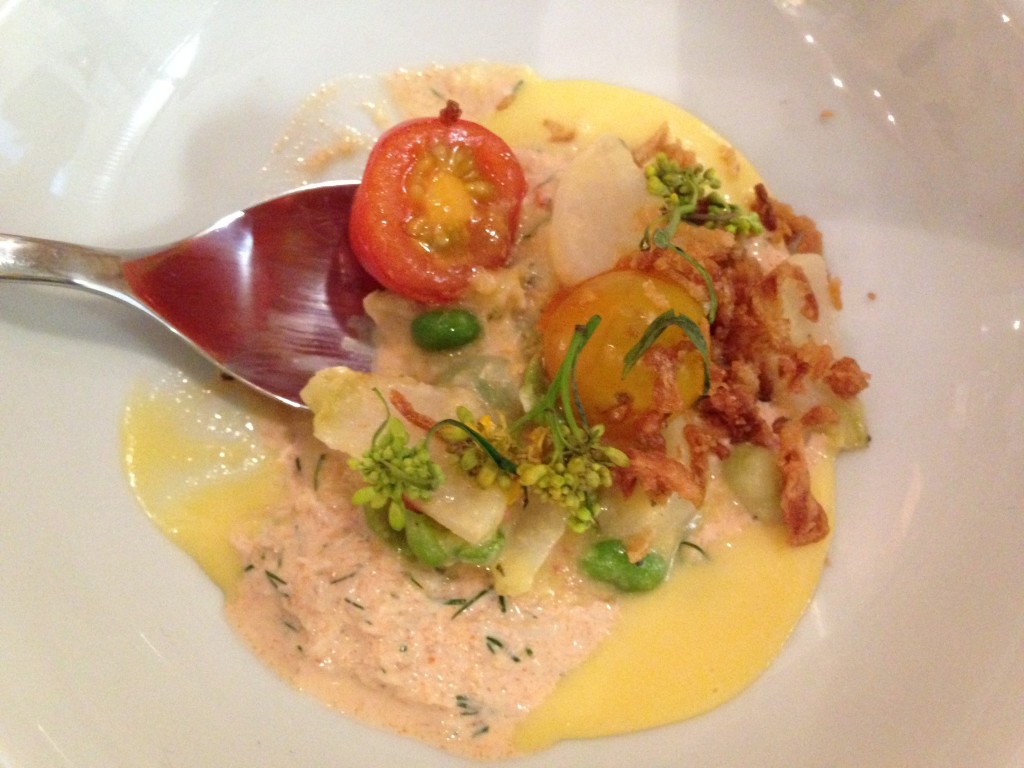 Elizabeth Rowe creates exquisite collage works from everyday items – in essence, she takes something apart and rebuilds it into something new. In her studio we were presented with Texture, Deconstruction and Reconstruction, a kind of deconstructed fish and chips with vinegar powder. 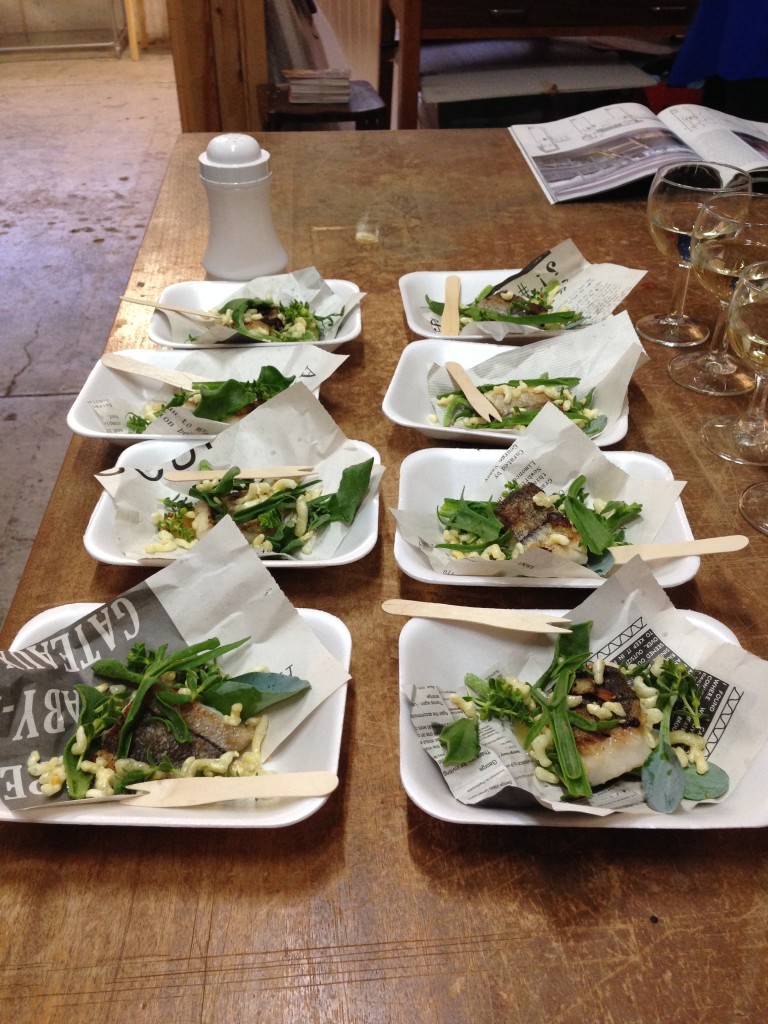 David Rowan is a landscape photographer, the difference being that all his work takes place underground. Sewers, tunnels, caves…these are the places that David likes to hang out. Into the darkness was served in the dark (there being no light in the sewers), the lack of light only serving to make the taco of venison, sorrel and apple doubly delicious. 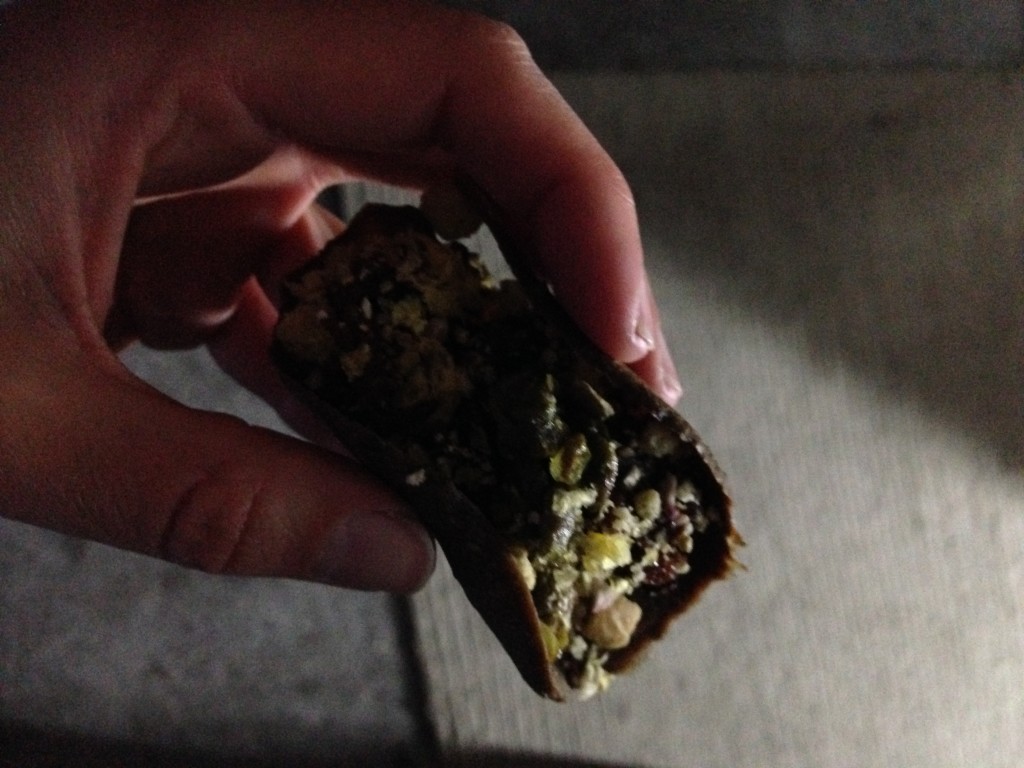 Onto Juneau Projects, an artist duo with a habit of making playful art. Recently they’ve been working on robotics – we were welcomed to their studio by a chatty robot. Come the Apocalypse looked at what we might the eating once the robots have taken over, with haddock, cauliflower and *ugh* wood ants. I know that they taste of lemon, that a shrimp is just a big insect, but I admit failure and could not bring myself to eat them. 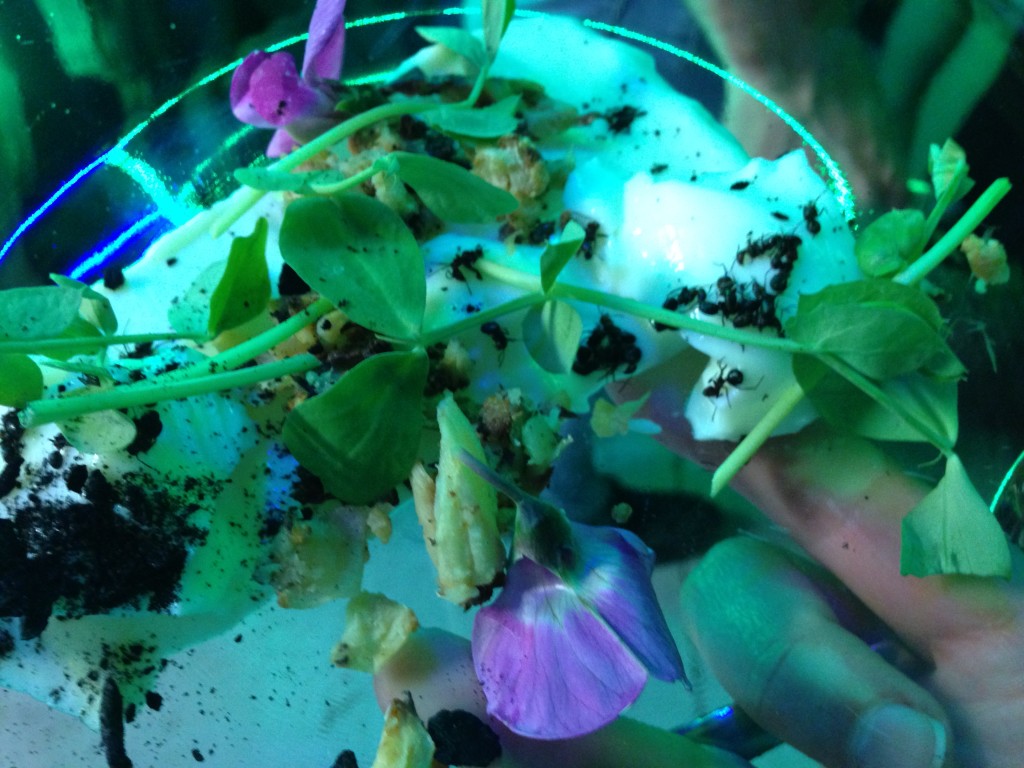 Tom and Simon Bloor pay attention to things that other people might miss: the beauty of a discarded drinks can, the form of abandoned bits of architecture. Here we enjoyed The Wasteland, a plate formed of the bits that we might normally chuck out: crispy chicken skin, weeds (which were green and fresh and amazing) and a chicken boudin, traditionally made with the offally pieces of the carcus. 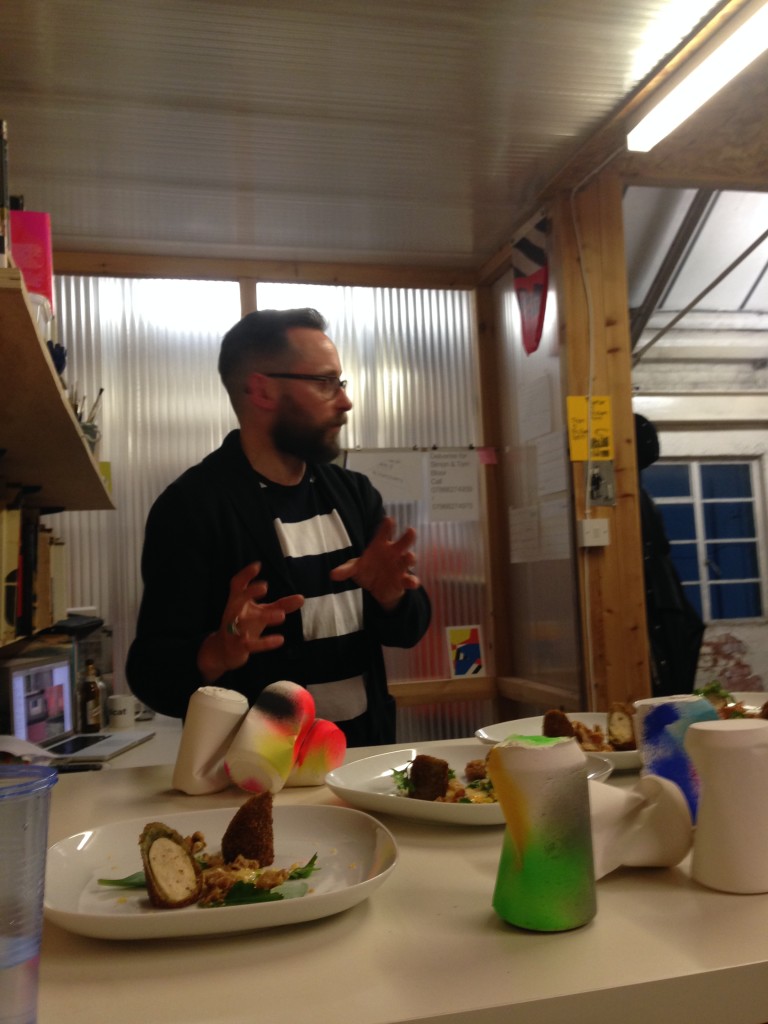 Finally we collapsed into Stuart Whipps studio. Stuart is an artist particularly known for his photography. His studio is furnished with reclaimed chairs and tables from Birmingham Central Library (the one that’s about to be knocked down) and given his interest and ongoing championing of Birmingham’s brutalist architecture, dessert was entitled Our deeply flawed past & other celebrations. We went retro with a 99 flake and a plum and custard tart. 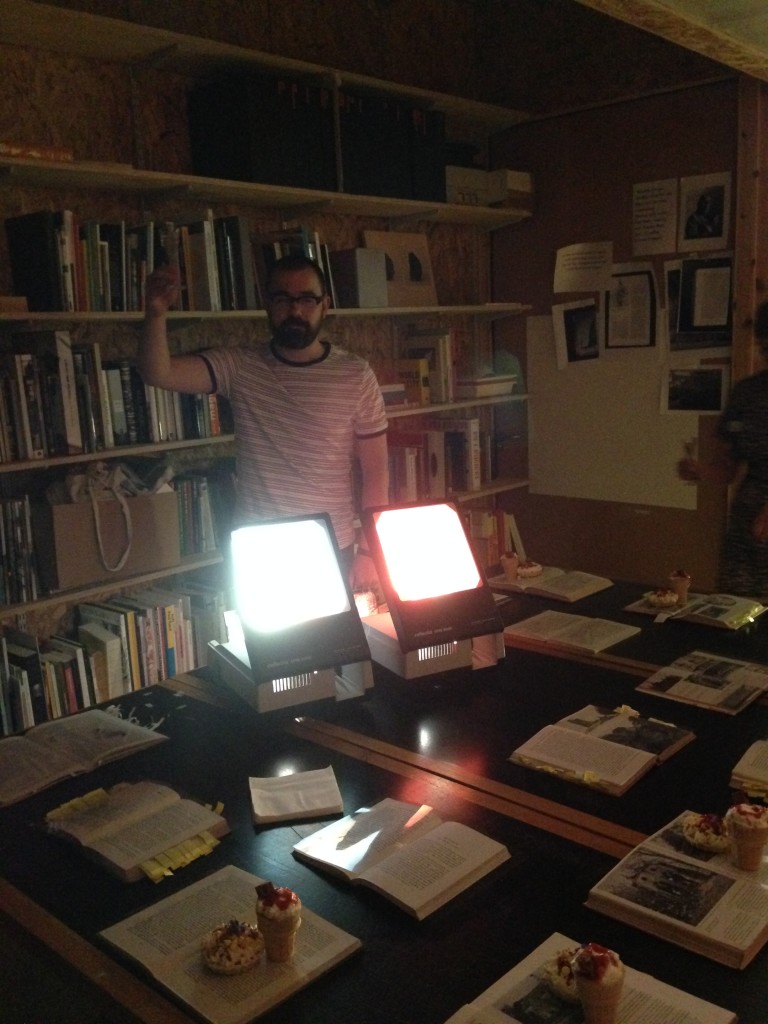 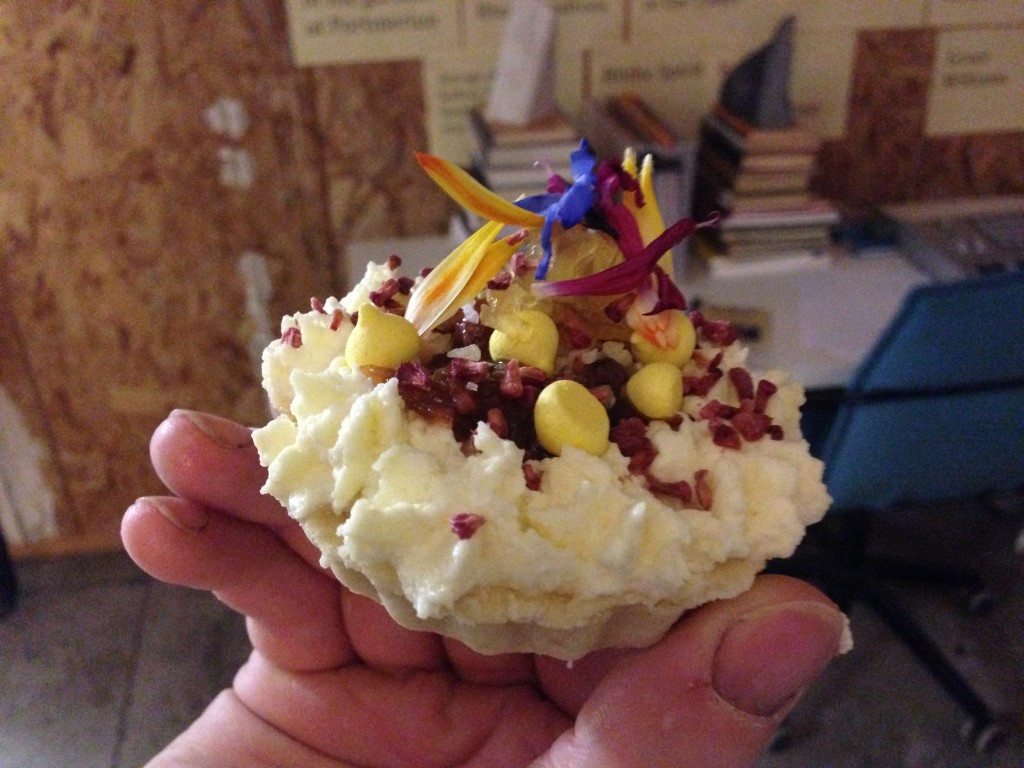 Congratulations to Grand Union for pulling it off, and to Nomad and Kitchen School for curating and (more importantly) cooking amazing food in a tiny little space. More please!

More information about Grand Union and the artists based there at www.grand-union.org.uk

One thought on “7 artists x 7 plates at Grand Union”