Finally, our dahlias have come into their own. Labyrinth is particularly showy, with massive dinner-plate sized heads in sunset pink shades. Picked with the hot pink zinnia, they give a late summer holiday vibe to the vase. 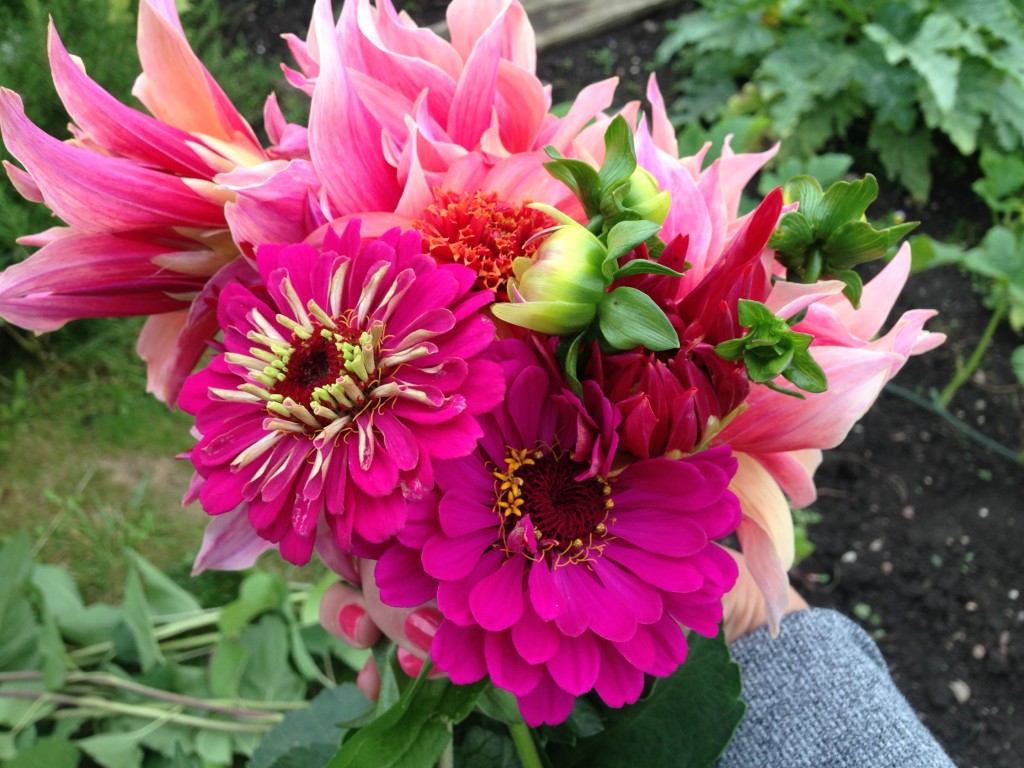 Dahlia and zinnia in sunset shades

Meanwhile the aubergines are ripe for picking, their glossy black skins looking beautiful against the red and yellow bowl of tomatoes. 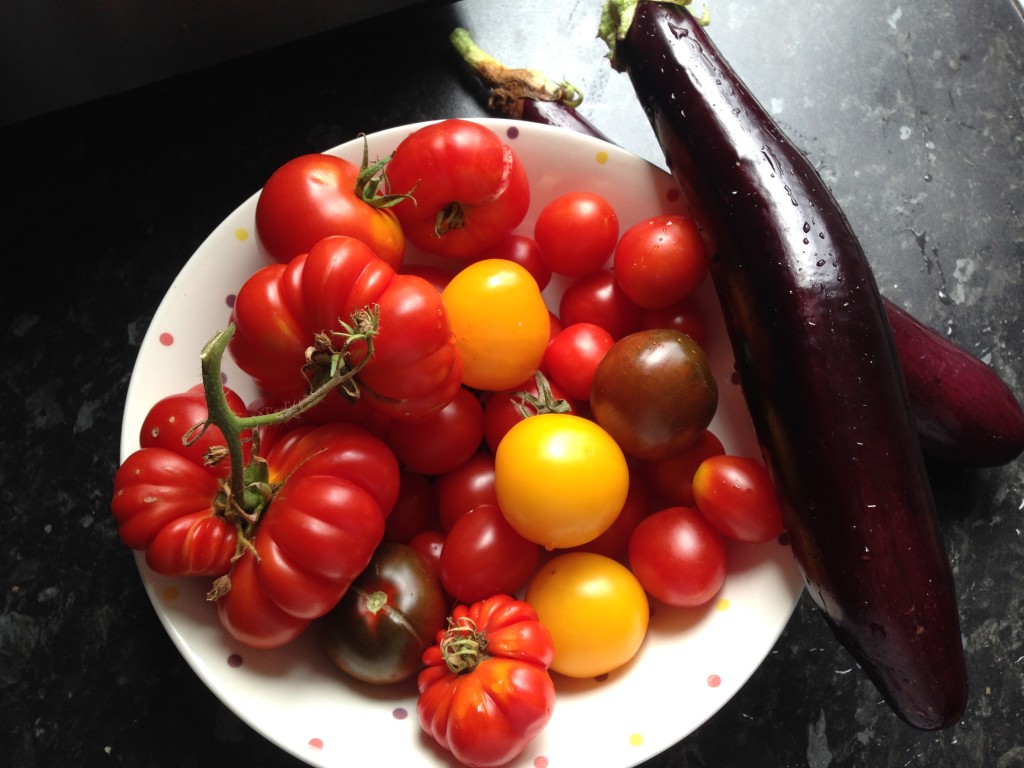 It’s not just me who is harvesting: Matt carried out a late-night mission to remove the hopolisk, catching the hop corns at their perfect ripeness. He now has several trays of papery hops drying in his workshop and the pungent “aroma” is filling the room. (For the uninitiated, hops and cannabis are part of the same family. They both stink.) You actually need a bare handful of hops to make a good quantity of beer, so the fate of all these beauties remains unknown. 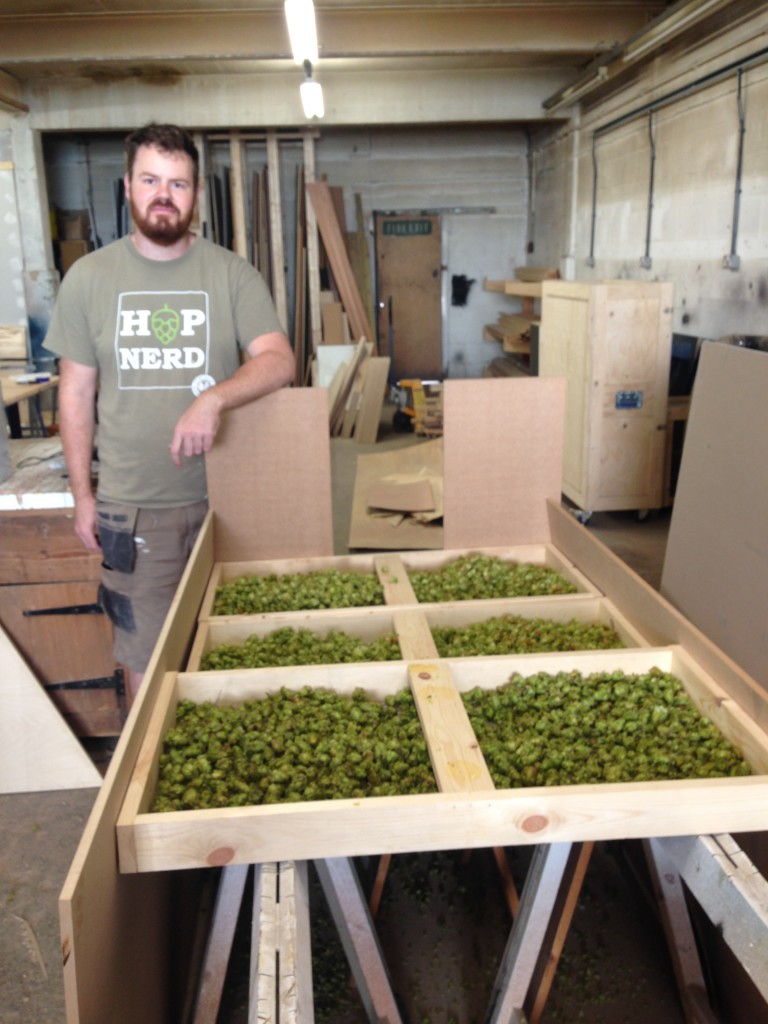 Matt’s hops are now drying in the workshop

But enough of all the growing; let’s do some eating. Last weekend our friend Tune came round to cook up an Indian feast; Tune’s from Calcutta and is the most reliable source of proper Bengali home-cooking. Star of our Sunday vegetarian menu was this egg curry. EGG CURRY? Yes I know that sounds weird, but it’s dead good. Apparently back home in Calcutta egg curry is a regular ‘kiddie tea’, in the way that we might get beans on toast, and this makes sense: it’s inexpensive, full of protein and fibre, not too spicy and very straightforward. It does take a bit of time to make, of course, but none of the stages are too strenuous. Most importantly, it tastes great. Why can’t we get food like this in the local ‘Indian’ restaurants? 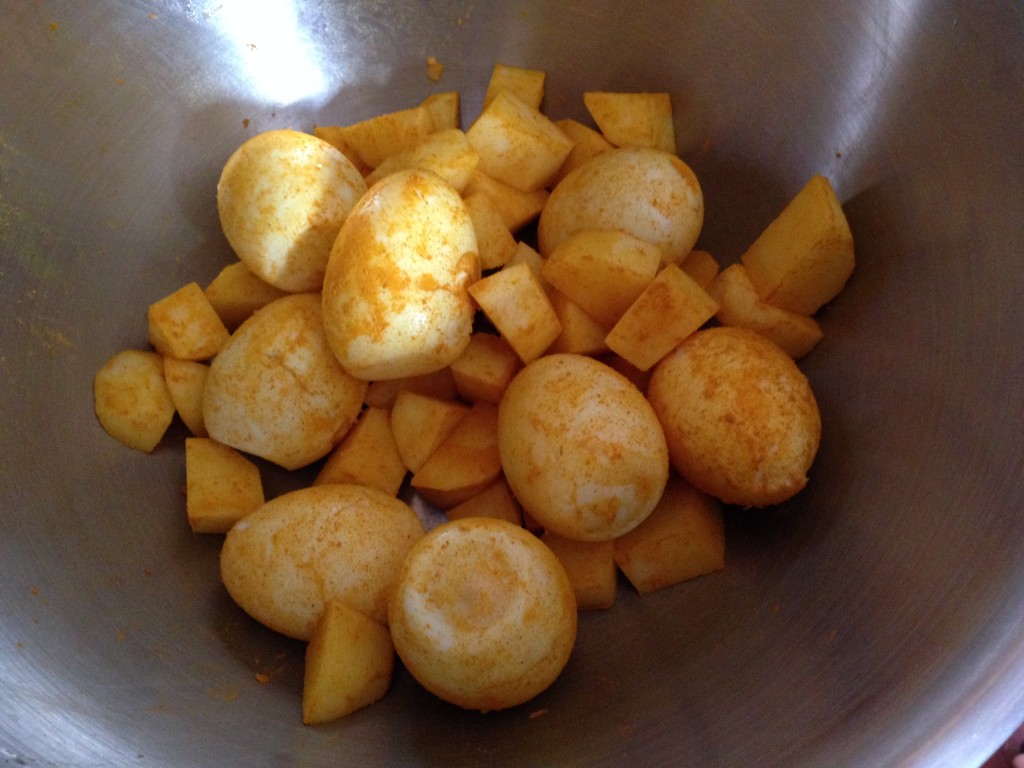 Toss hardboiled eggs and diced potatoes in salt and turmeric

The eggs are fryed in a splash of vegetable oil, in a wok or karahi. They will go vaguely crispy on the outside, which gives a nice texture to the finished dish and also helps to firm them up a little. Once the eggs are browned, the potatoes are treated the same way and cooked until half-done, then set both to one side whilst we make the sauce. 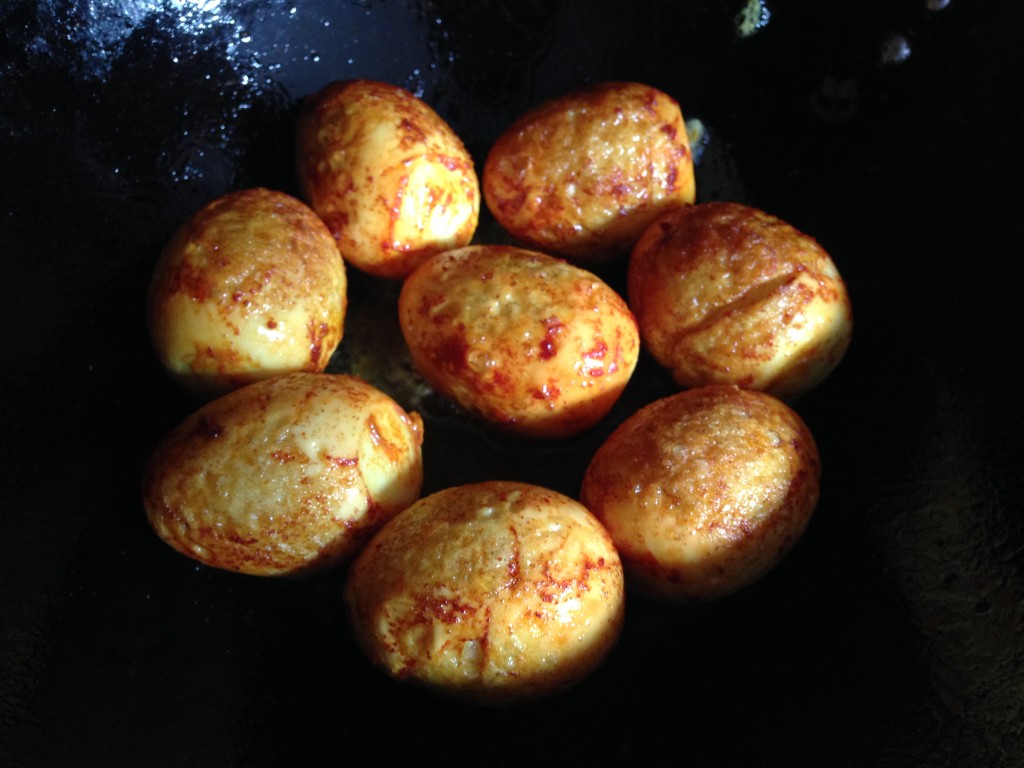 Fry the eggs in a little vegetable oil 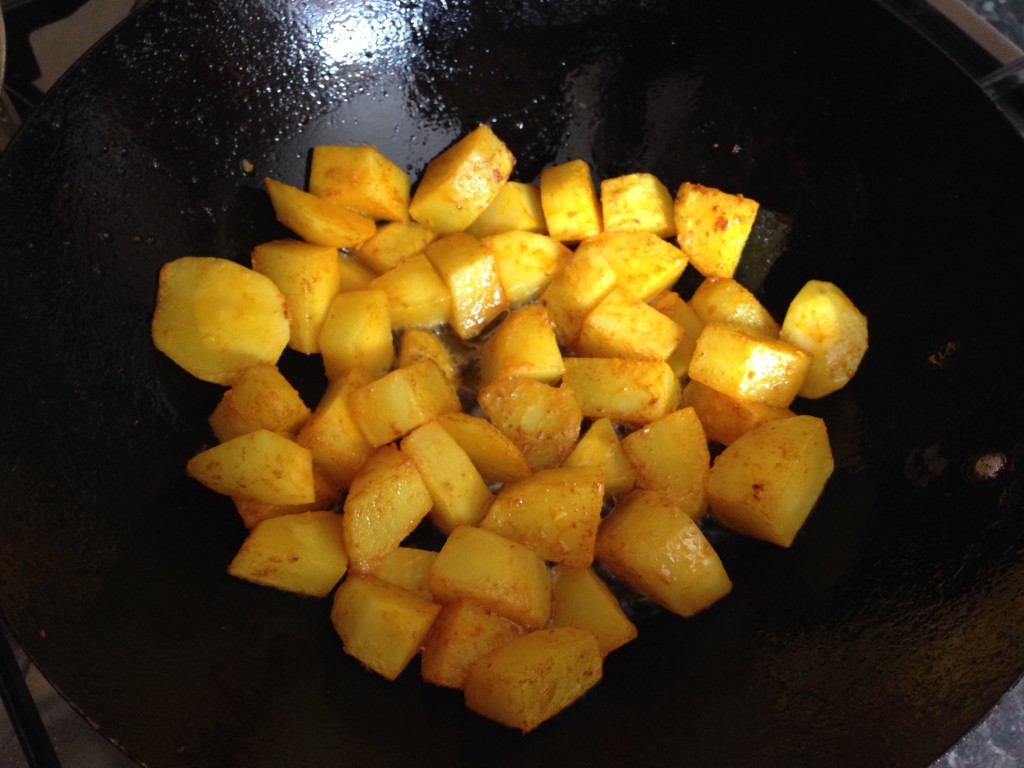 Do the same with the spuds until they are half cooked

Next we need to get a couple of onions and whizz them up in the food processor to a proper puree. Sizzle some ground cumin, coriander and chilli powder in the pan, then dump in the onion mix along with garlic, ginger and bay leaves. Next is the important bit: it needs cooking down down down and can’t be rushed – it needs at least 15 minutes before we get to the next stage. Keep the heat low and give it a stir every now and then. 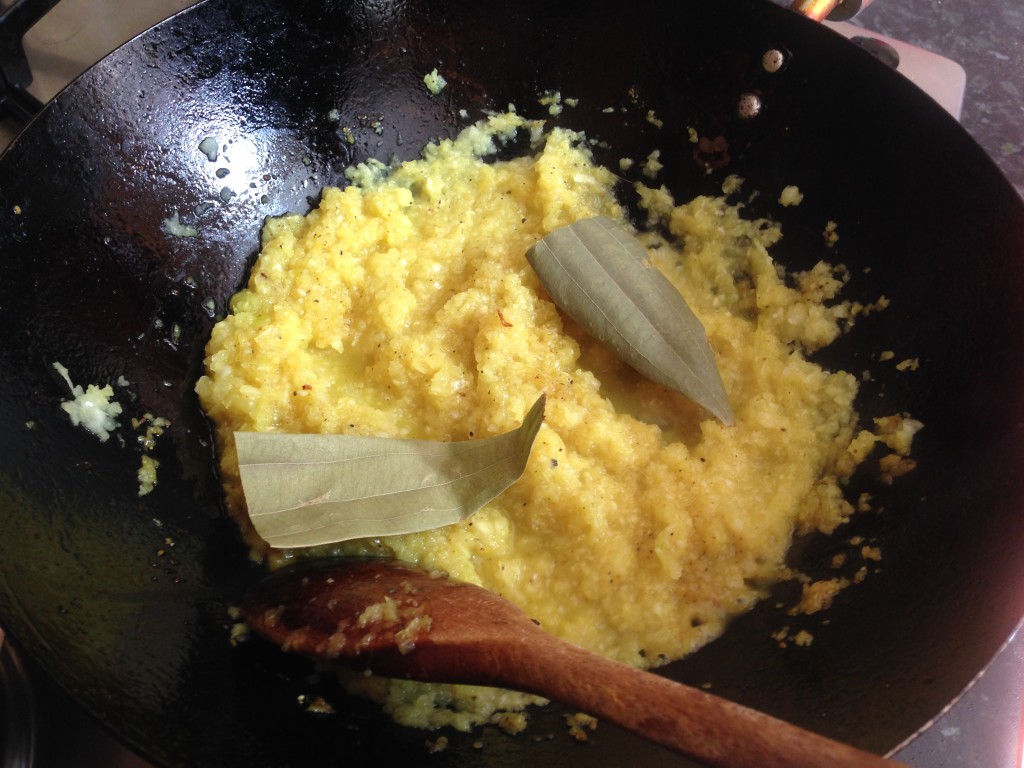 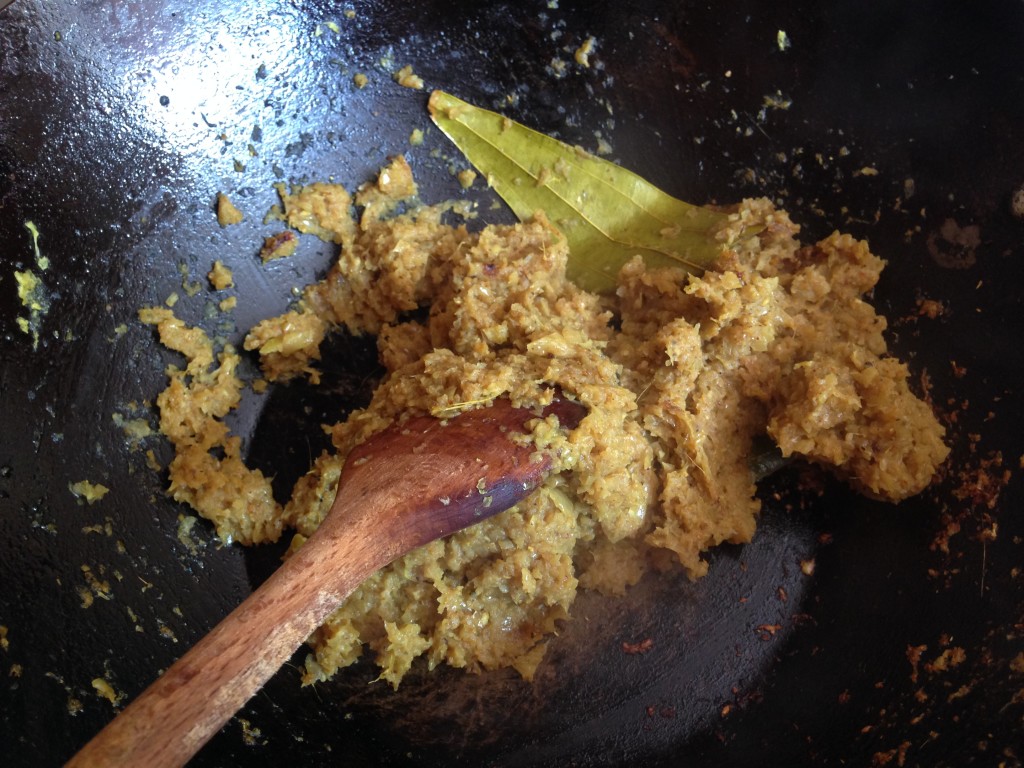 It needs to be REALLY cooked down, so don’t rush it. 15 minutes later, it looks like this.

Once the onions are heavily reduced, add a few chopped tomatoes (tinned is fine) and once again we have to reduce and cook it down. This lengthy pre-cooking stage helps turn the curry from a raw, runny, watery mess to a deeply flavoured, rich delight. Cook the mixture down until the oil begins to separate from the puree – it may take another 10 minutes or more. 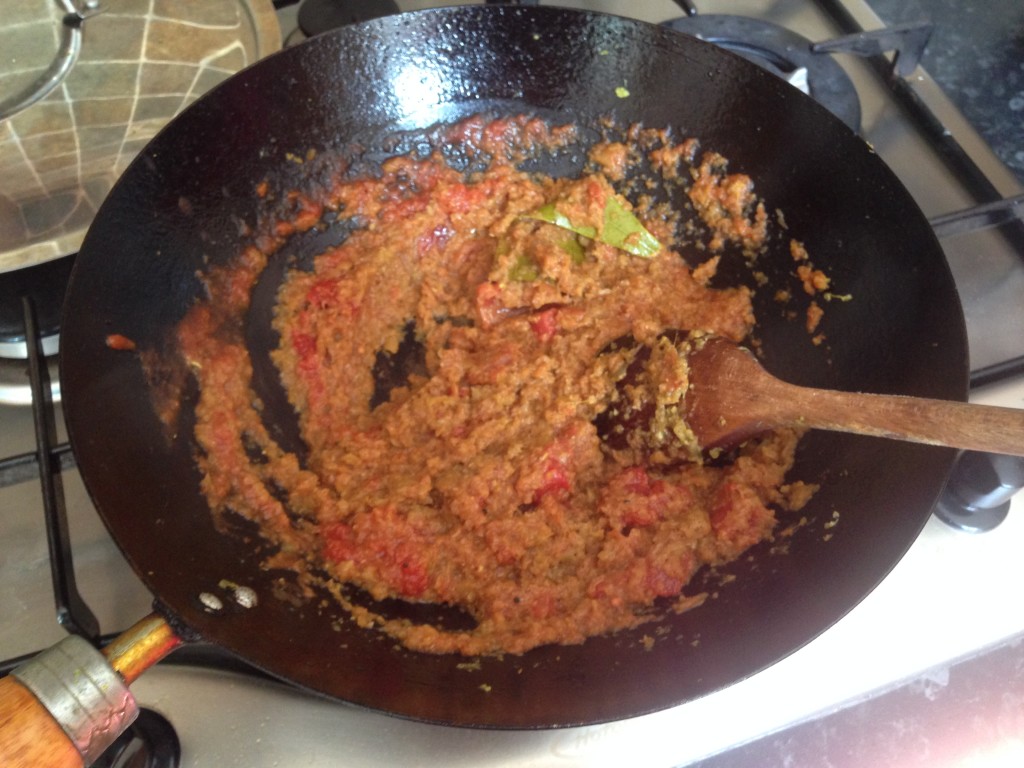 Add a few tomatoes and cook down even further, until the oil separates

Once the base sauce is ready, return the eggs and potatoes to the pan along with a splash of water, gently stir to combine, then cook through until the potatoes are soft. 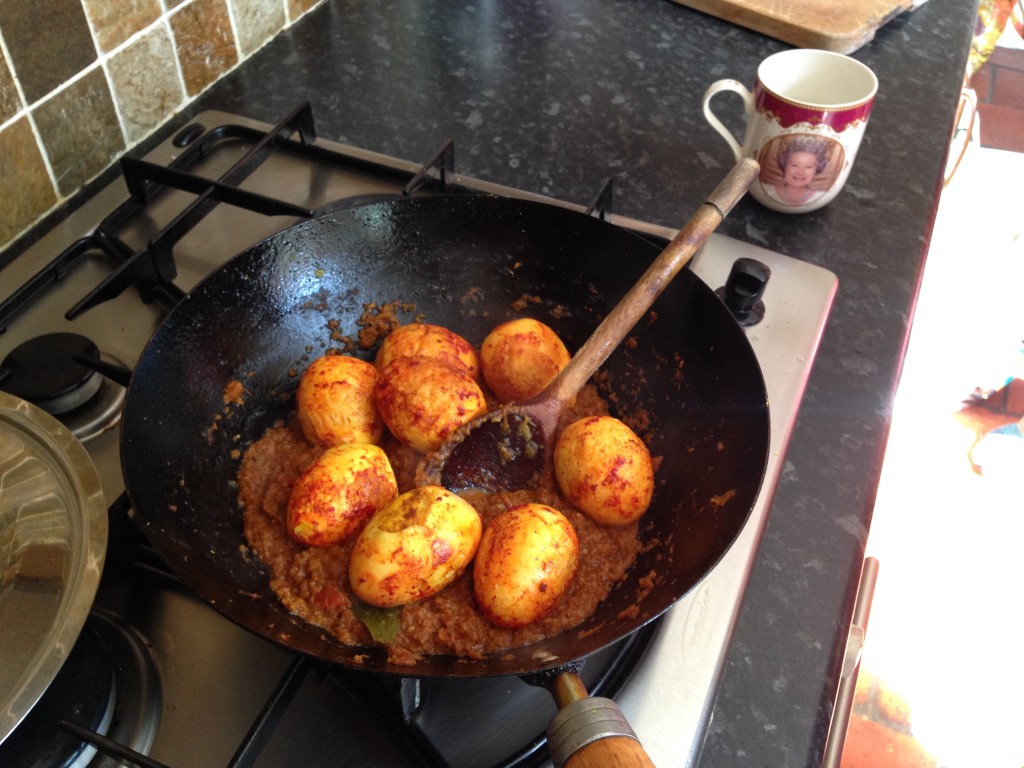 Put the eggs and potatoes back, along with a splash of water

And that is it! Simply finished with a sprinkle of coriander, then serve with rice or roti and a side vegetable or two. Cook the potatoes through and add chopped coriander to finish

Egg curry is one of the best vegetarian dishes you’ll find. The eggs have a firm yet creamy texture, the potatoes give substance and the onion-tomato sauce manages to be light, rich and comforting all at the same time. We enjoyed ours along with sag paneer (with home-grown spinach), rice, roti and an awesome salad made from sprouted mong beans – but that’s a recipe for another day. 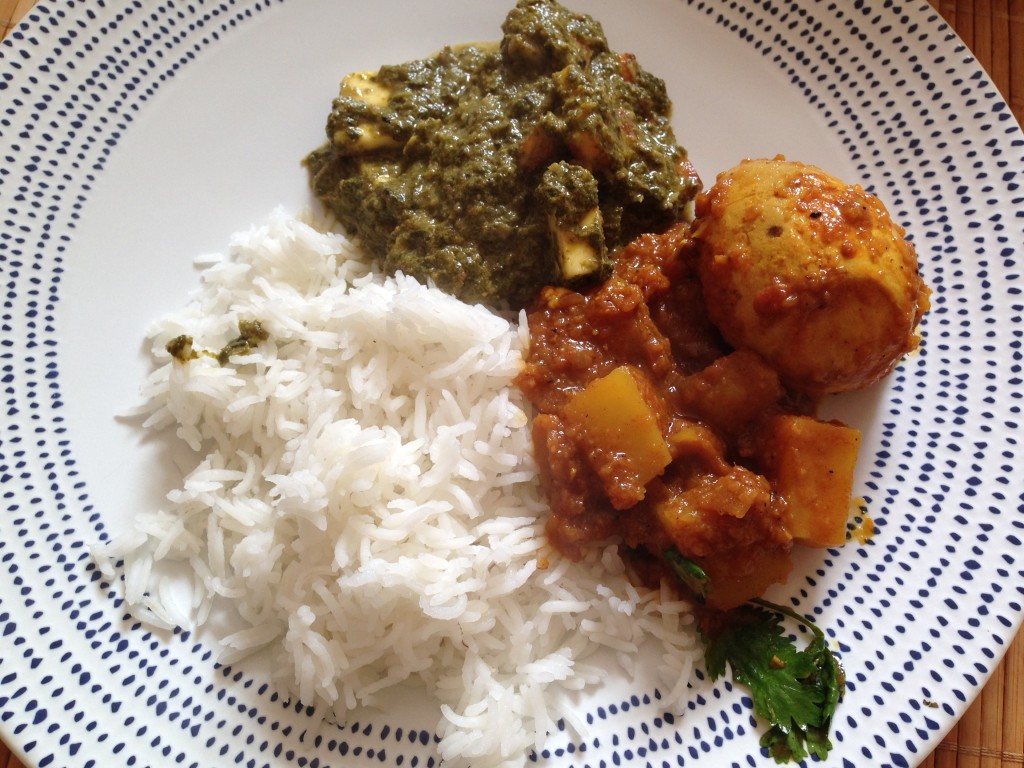 1/2 tsp ground chilli, or to taste (leave it out if you don’t like heat)

Whizz the onions, garlic and ginger in a food processor until you reach a very fine puree (you may need to do this in batches, depending on the size of your machine).

On a low heat, fry the cumin, coriander and chilli for a few seconds, then add the onion mixture to the pan. Add the bay leaves. Cook down on a low heat for about 15 minutes, until thick and heavily reduced. Add the tomatoes and cook down again for 10 to 15 minutes, until the oil separates from the vegetable mixture. It will look darker and may begin to stick to the pan.

Add the eggs and potatoes back to the pan with a splash of water, stir to combine and cook on a low heat until the potatoes are cooked through, around 10 minutes. The sauce should be thick enough to cover the eggs but loose enough to scoop with some bread, so add more water as you need to get the right consistency. Finish with chopped coriander leaf.