We’re in recovery from our first ever trip to Chelsea Flower Show. Actually, to be truthful, it’s not Chelsea that needs recovering from, rather the shock of visiting a coffee shop on a Sunday morning in Clapham and being immersed in the culture of expensive-lycra-clad Londoners, shouting into their phones as they fork out £20 on a tiny portion of avocado on toast. (This is not an exaggeration. The bakery also had tiny, tiny little rolls filled with a single slice of boiled egg that would have set you back a fiver. I can only presume that the 20- and 30-somethings of South London are treating prosecco as a major food group and therefore actual food is not required. They should all visit Copenhagen sharpish and learn to live more Danishly).

Back in the scruffier, poorer, and significantly friendlier, surroundings of Bearwood, I can reflect on our visit and draw out some of the design inspirations that I may want to try at home.

The first thing is that Chelsea is bonkers. Absolutely mad. It’s not actually that big, yet it warrants as much prime-time BBC TV coverage as major international sporting events. What does this say about the British? What other nation would see fit to recreate a picture-perfect 1930s allotment IN A TENT, or to craft classic children’s TV characters out of chrysanthemums? It is eccentric, wonderful, madness. 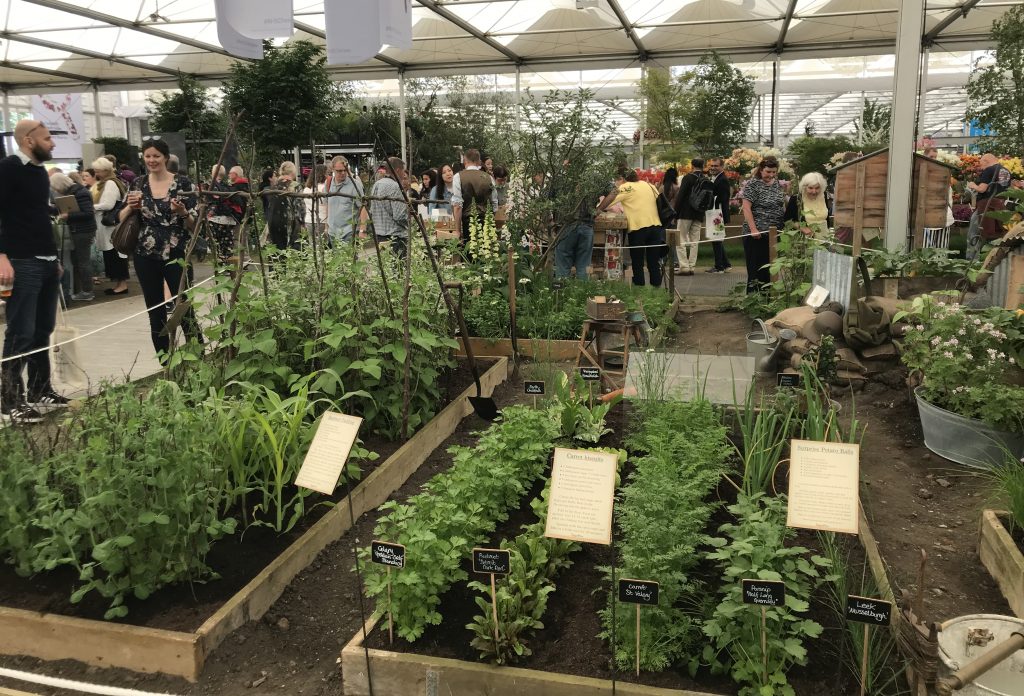 What other country would replicate a full size allotment, in a tent? The British are bonkers. 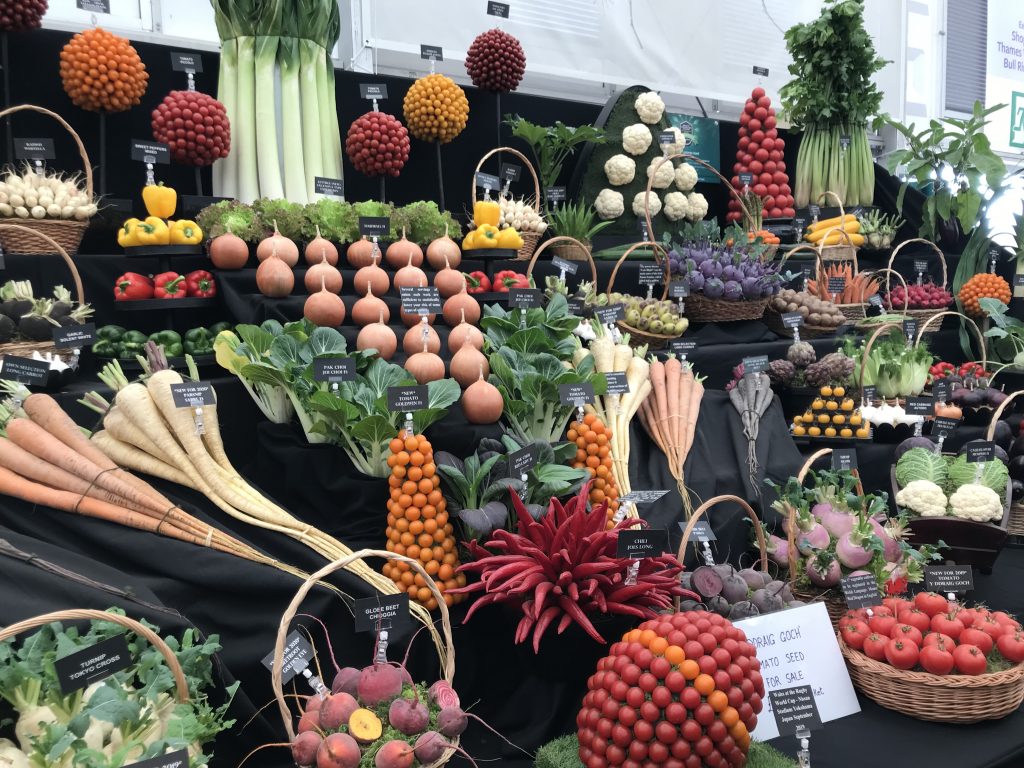 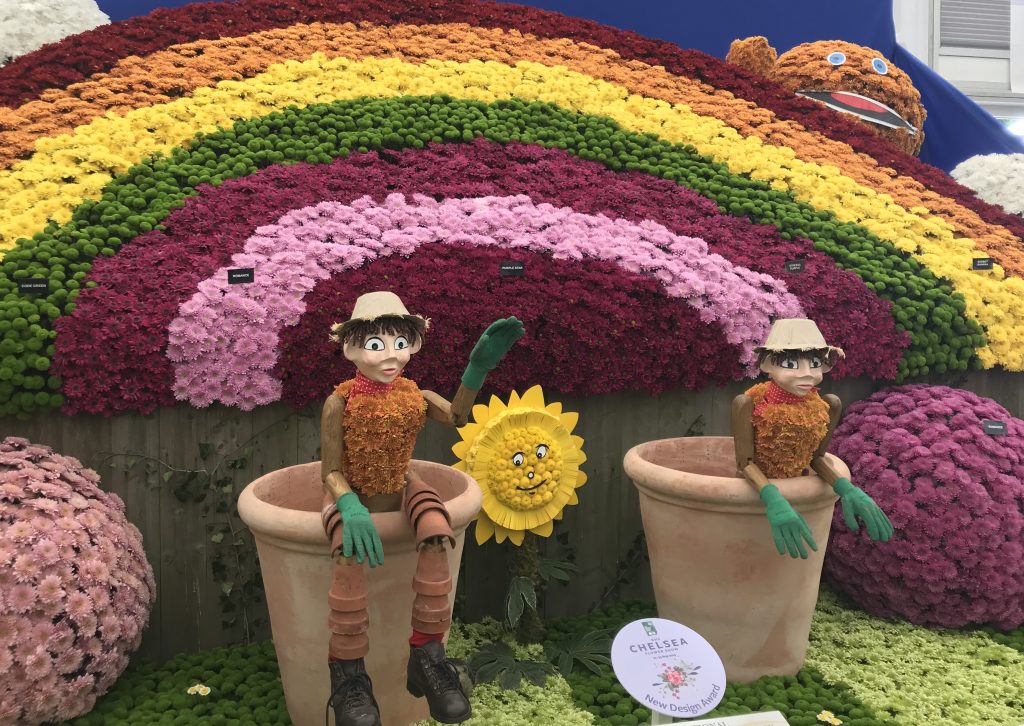 ‘I know!’, said the chrysanthemum Society. ‘Let’s recreate Zippy out of orange Chrysanths!’

I LOVE the madness and find it heart-warming that so much effort is put into botanical creativity, usually by quite quiet, gentle, unassuming people who run specialist flower societies and nurseries. Because the other thing about Chelsea is that it really matters. Careers are made at this show and millions upon millions of pounds is spent every year on the show gardens and displays. Big investment banks put up six- and seven- figure sponsorship packages in an effort to look more human. There’s an interesting, and quite timely (yes, I am talking Brexit), dichotomy between the culture of London mega-bucks global image-making and the provincial salt-of-the-earth types who actually get the show made. It’s an uneasy relationship at times..but good for these worlds to meet.

On to the plants. The big draw for most visitors are the show gardens but I found the smaller displays far more relatable and interesting. Many designers used what I call a ‘confetti’ effect in their planting, with small, quite delicate flowers in a host of clashing colours, which together give a sense of fullness. This lily also caught my eye – Isabel – with its double flower ranging from white through to a deep pink. 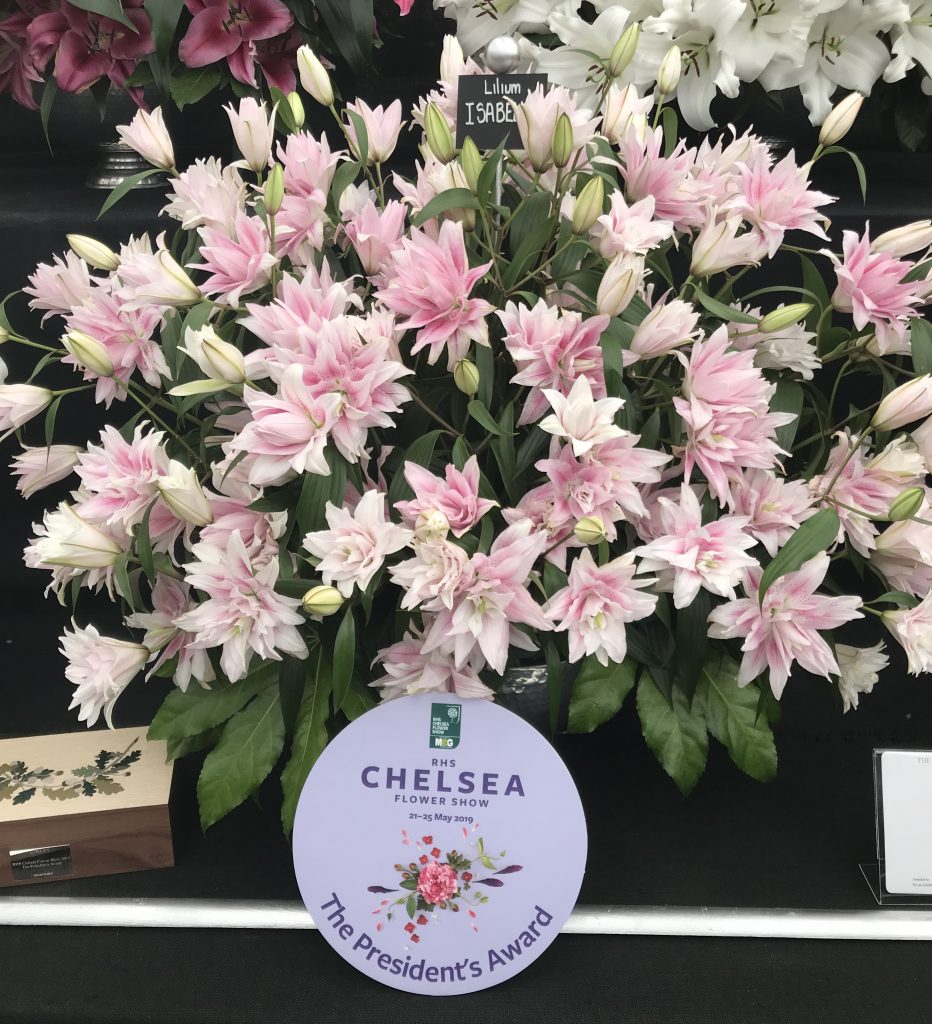 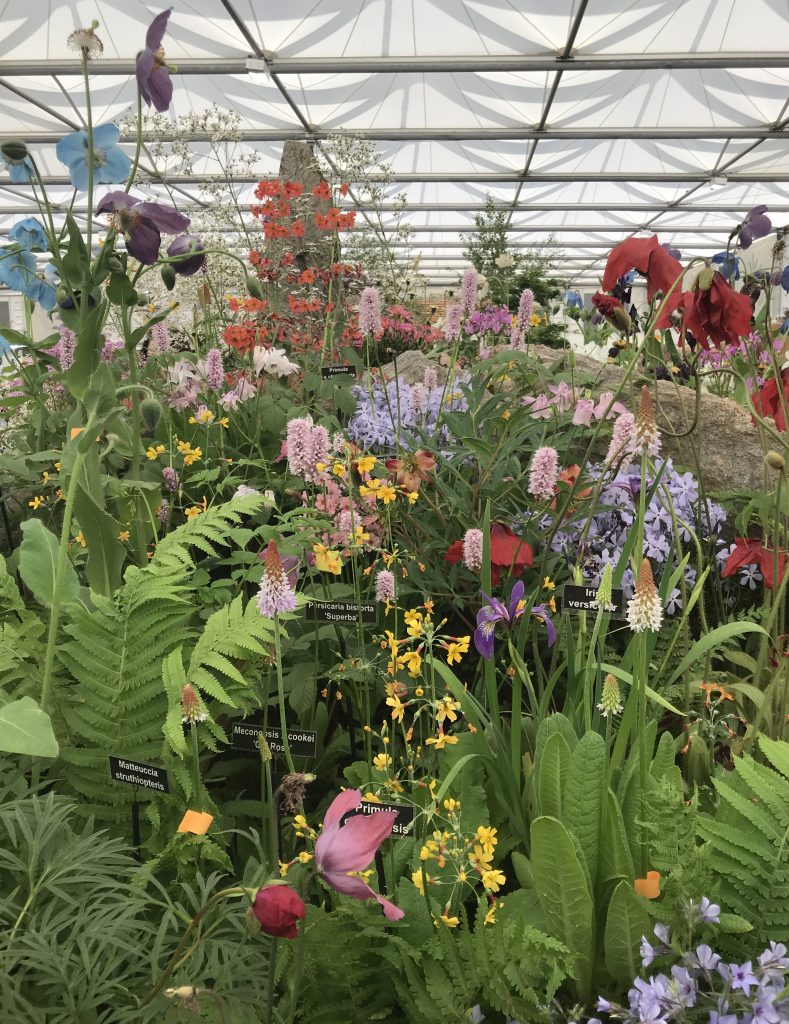 Oh and the sheds! Or – as they prefer to be known at Chelsea – the garden rooms! I never thought I would covet a shed but I do now. I am lobbying for a lean-to greenhouse to be attached to mine, as in this picture. These were actually the most ‘normal’ of all the garden furniture on display; the rest of it required a small stately home to carry off. 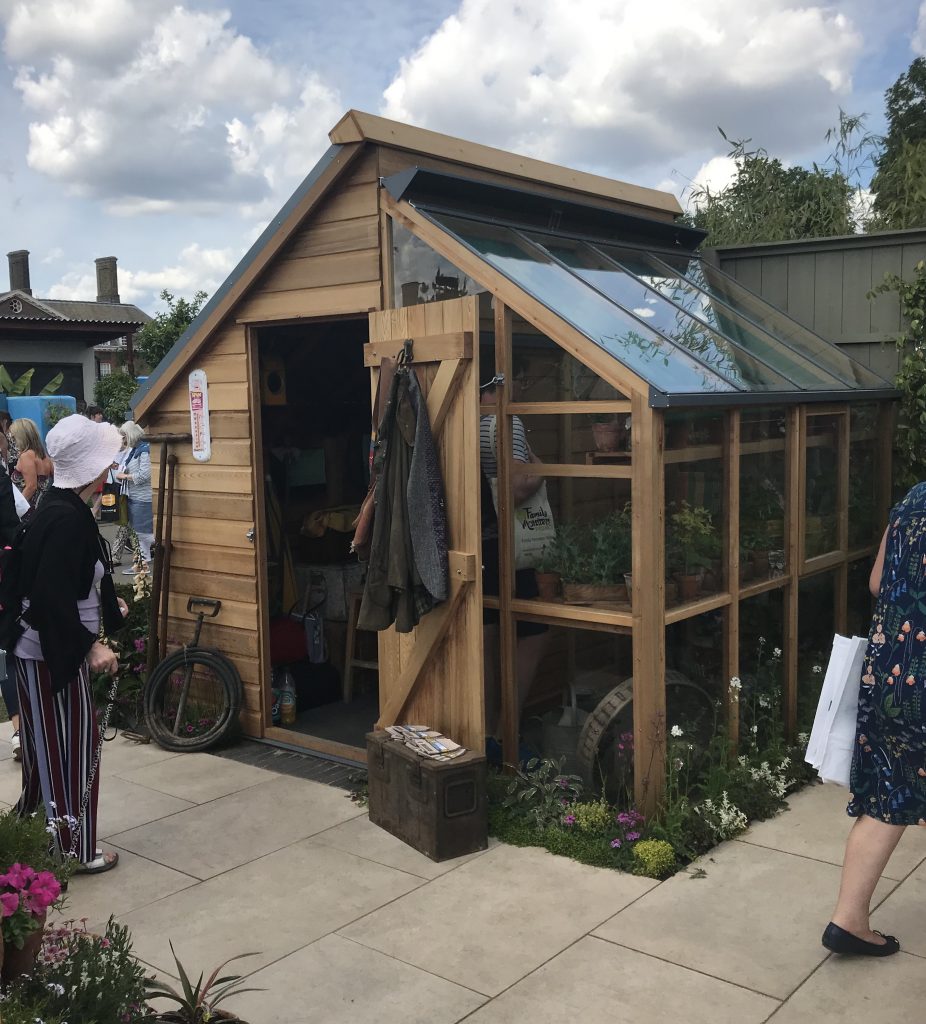 The most memorable garden for me was the Montessori Children’s Garden – I do have a slight bias as Harry is at a Montessori nursery – as of all the gardens, it seemed to be the most fun / least earnest. This is not just a garden for kids, but for anyone who believes that plants make people happy. It was a riot of colour, filled with that confetti-style planting I love, and with edibles rammed in alongside the delphiniums and poppies. The height of the plants means that the flower heads (and therefore bees and other insects) are at child head height, so they can be truly immersed in the outdoors. Wonderful stuff. And the plant markers were painted wooden spoons, which is such a brilliant idea that I will definitely use it on the allotment; so much better than those stupid little plastic labels that the blackbirds love to peck at. 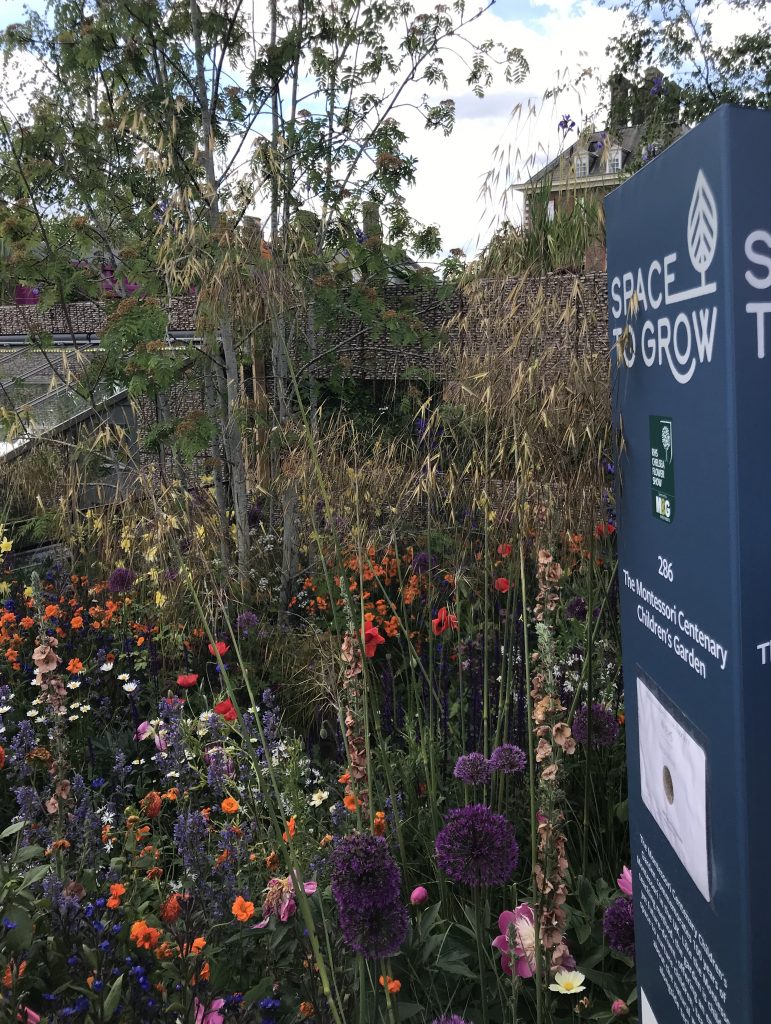 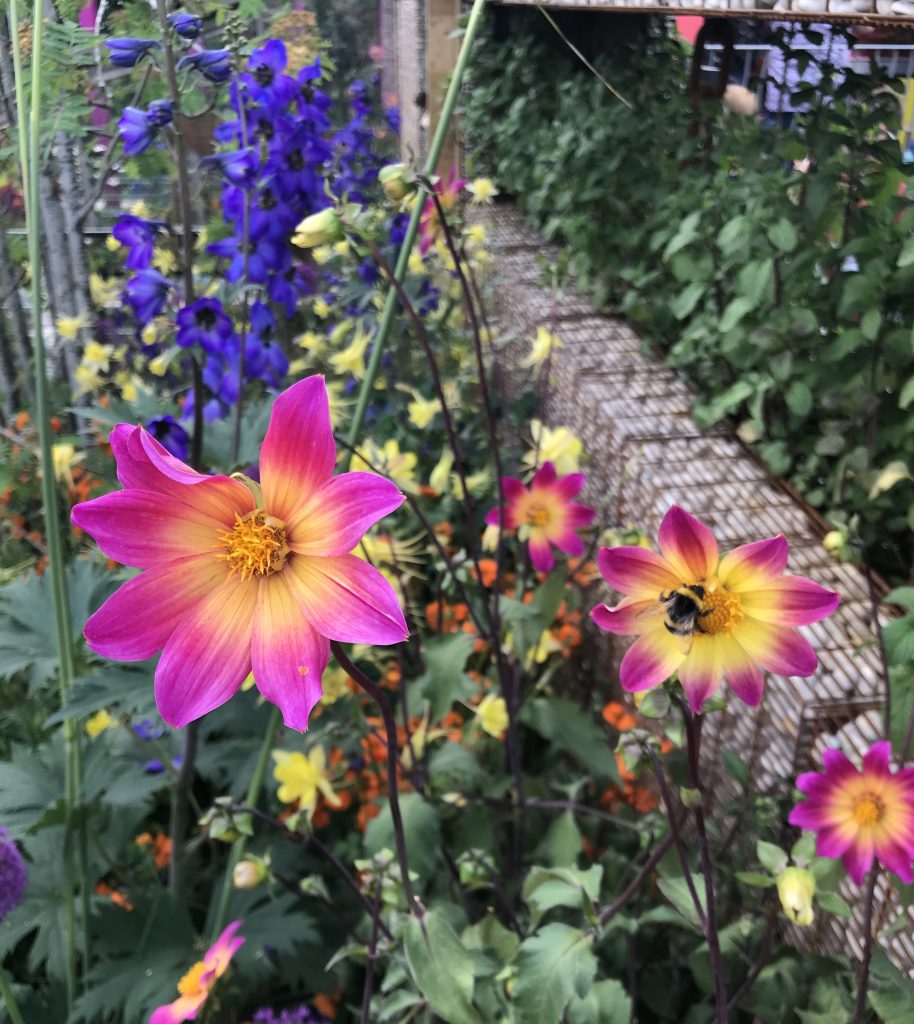 Colour pops and height make this so much fun 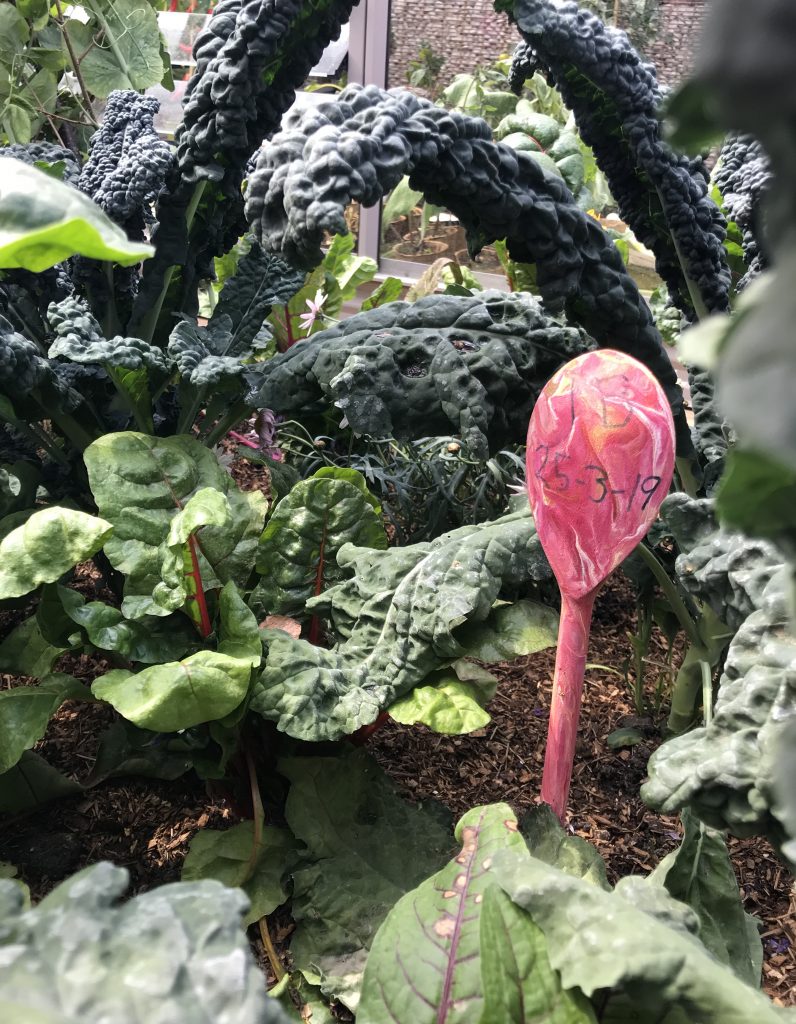 Elsewhere, the D-Day 75 garden used a drift of sea thrift, found along the shores of Normandy and the British Isles. I found the airy white and pink of this planting incredibly evocative and moving, far more so than any poppy display I’ve seen. 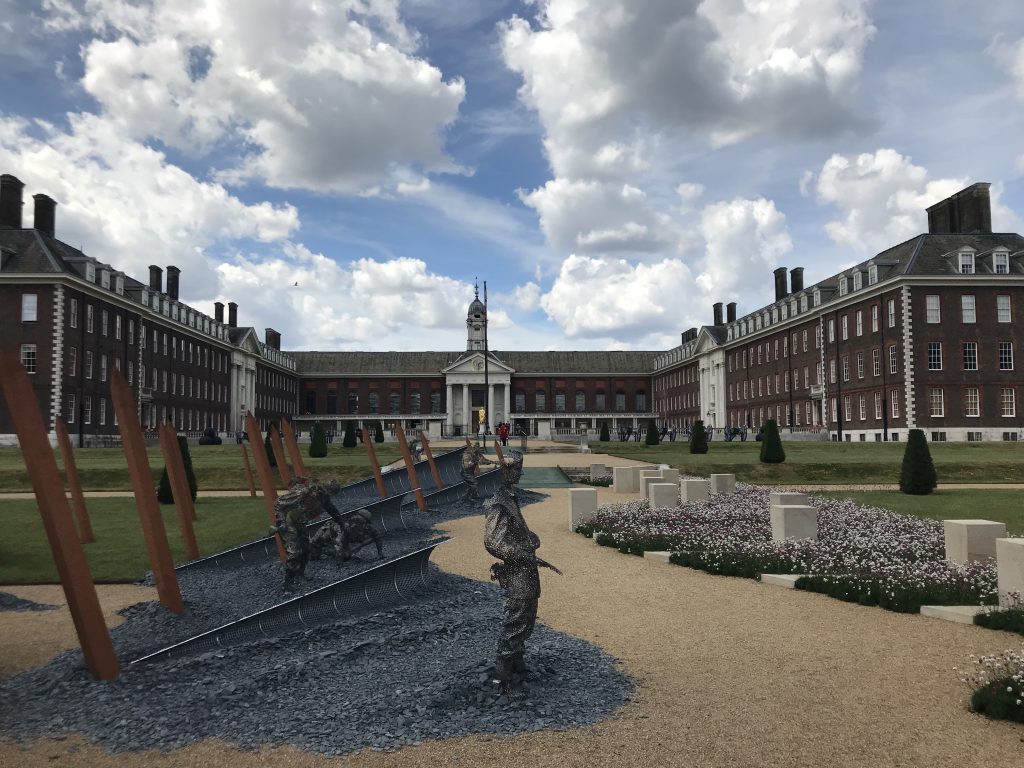 There was also ALOT of green. I am not great with green; I don’t know enough about foliage plants to know what to get or where to put them, but I think I should try to learn more. It was especially effective on the Finland garden, where it acted as foil to the airy white foxgloves, daisies and peonies. 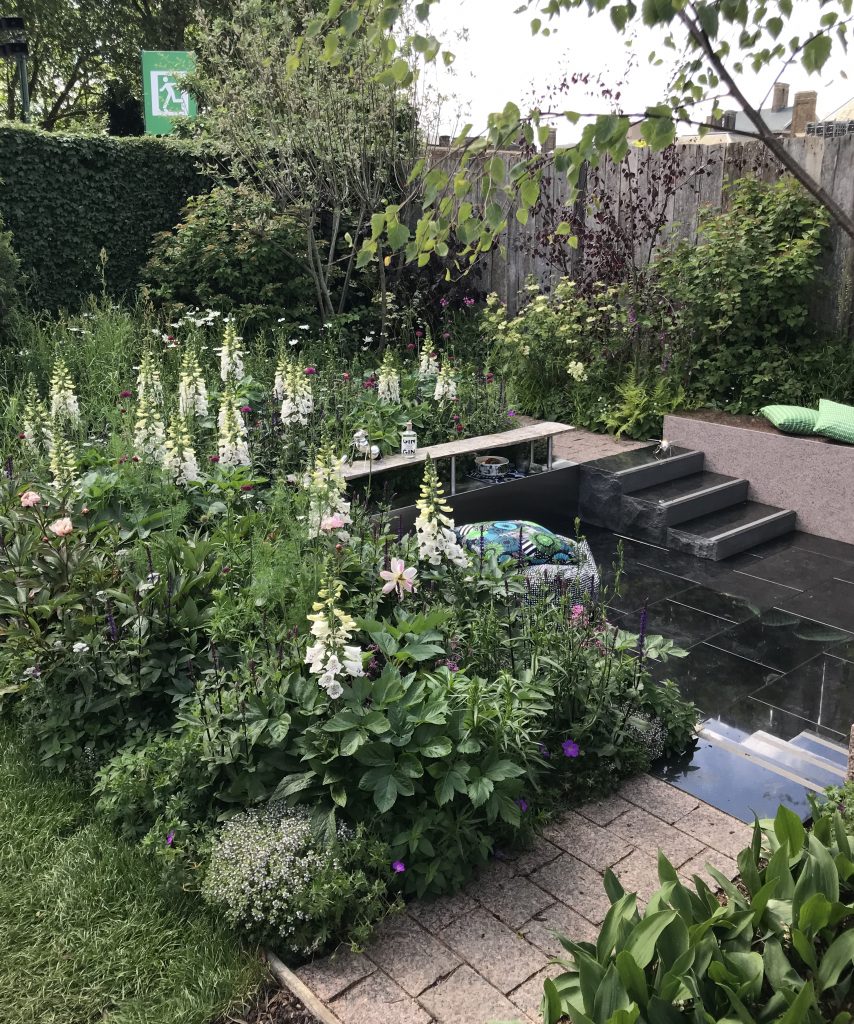 I thought there would be more contemporary, gardening-as-art, style displays as there has been in previous years but perhaps the old guard aren’t ready for that yet. (I found even the high-end garden sculptures on sale to be of questionable artistic merit.)

But I do leave with plenty of practical inspiration for the summer. And memories of an enjoyable day out that seems to sum-up all the contradictions, eccentricities and polarisations of Brexitland Britain.

Cooking and eating: Harissa lamb kebabs with broad beans dressed in yoghurt and garlic, with Greek chips; lots of strawberries and raspberries, first Spanish cherries, a delicious Provencal rose from Aldi, of all places.

Allotment and garden: Planted out the dahlias and remaining annuals, took delivery of a van load of Mum’s plants including the hanging baskets. Picking sweet rocket, alliums and persicaria. Roses are in bloom. Mum’s first lettuce, broad bean, spinach and radish.