Occasionally a magazine will come up with an image so brilliantly filthy that the recipe begs to be cooked. Such is this, from the February issue of Waitrose Kitchen. A bread stuffed with posh home-made Nutella? Yes. Please. 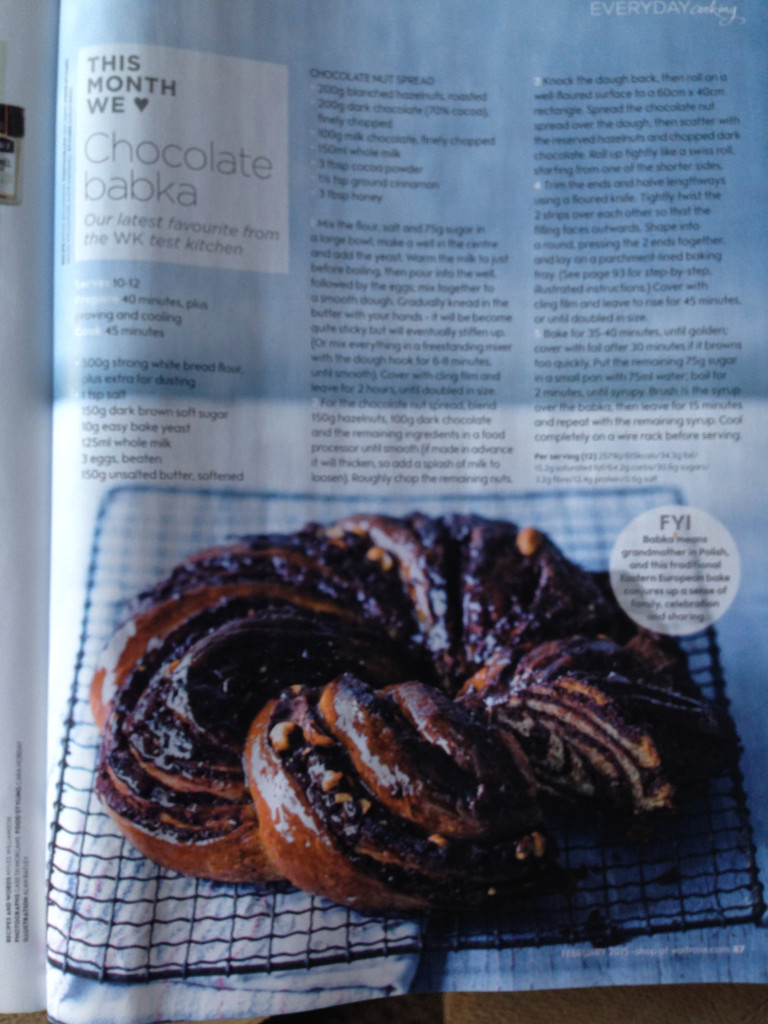 They’ve called this a babka, which is a traditional Polish enriched bread, stuffed with nuts and cocoa then folded four times into a tin to make a giant loaf. It was featured on last year’s Bake Off, when all the contestants messed it up by baking for too short a time. I’m pretty sure that babka has Jewish roots…I’ve made a mental note to research that properly.

This recipe is clearly not that. The flavours might be the same, but there is none of that tricky folding and shaping. It’s more like a couronne, a French twisted crown-loaf. So that’s what I’m calling it.

First up, make an enriched dough. This one has milk, butter, eggs and a touch of dark brown sugar. The recipe said to use some easy bake yeast but I had fresh in the fridge, so that’s what I used. It’s a soft dough but not impossibly so, and came together easily enough. I worked it by hand for about five minutes (I use the Richard Bertinet technique) and then left it for a good two hours to rise. 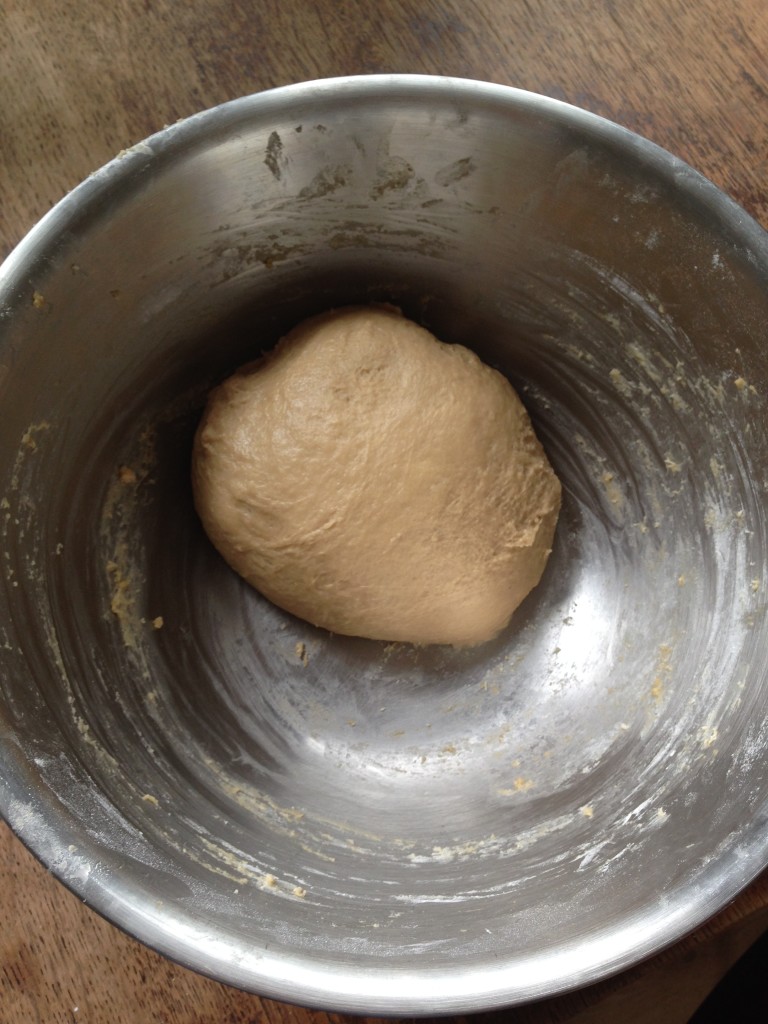 The worked dough prior to its rise

Whilst it’s rising, make up the chocolate nut filling. The recipe said to use a mixture of 70% dark and milk chocolate, but I used regular dark chocolate (Bournville-type). It gets whizzed up in the food processor with whole hazelnuts, cocoa, honey, milk and cinnamon. It comes together into a spreadable paste, like chunky Nutella, but loads better. If you were so-inclined, a bit of orange zest might be a nice addition here. 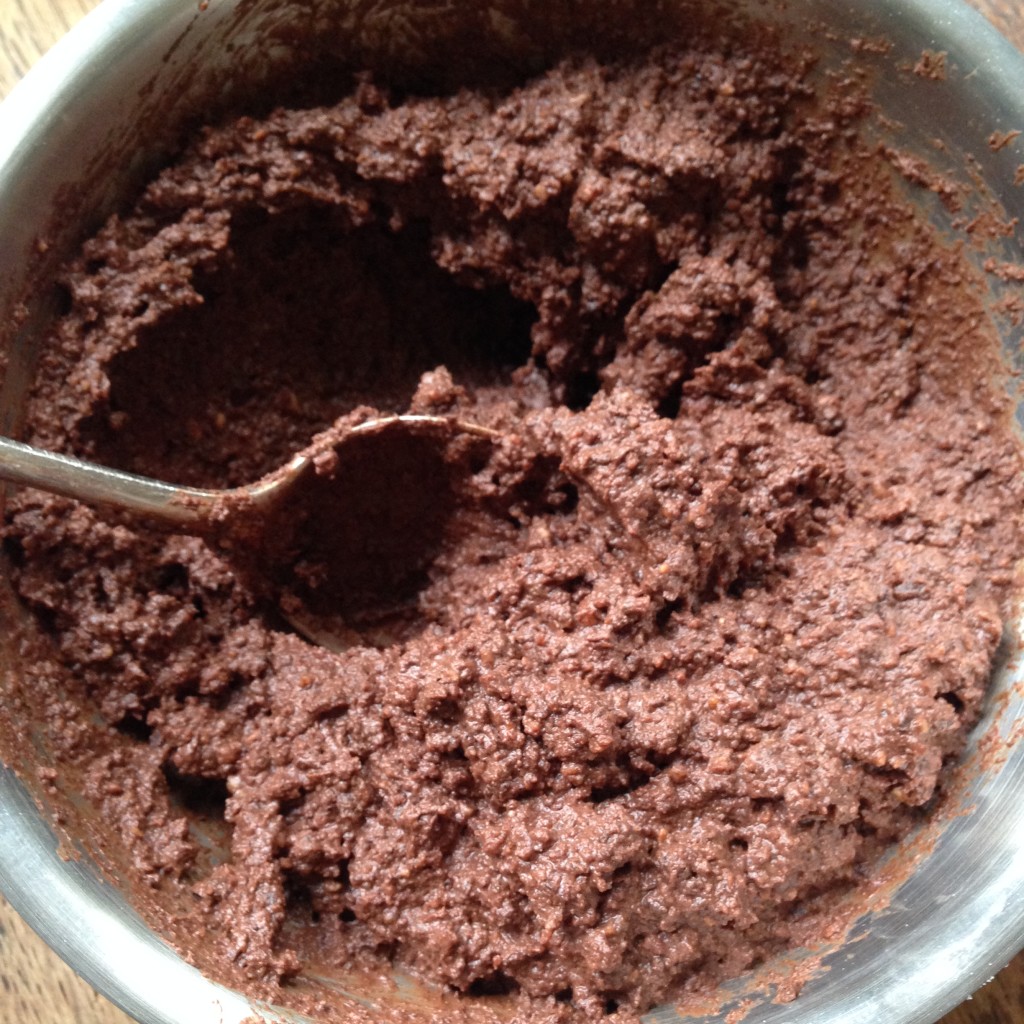 Now the fun bit! The dough needs rolling out, filling and rolling. The recipe said to roll it 60cm x 40cm, which is the kind of instruction I read without ever actually comprehending. Matt, the human-calculator, happened to be around so told me how big this actually is: “roll it bigger than your biggest chopping board”. So that’s what I did. 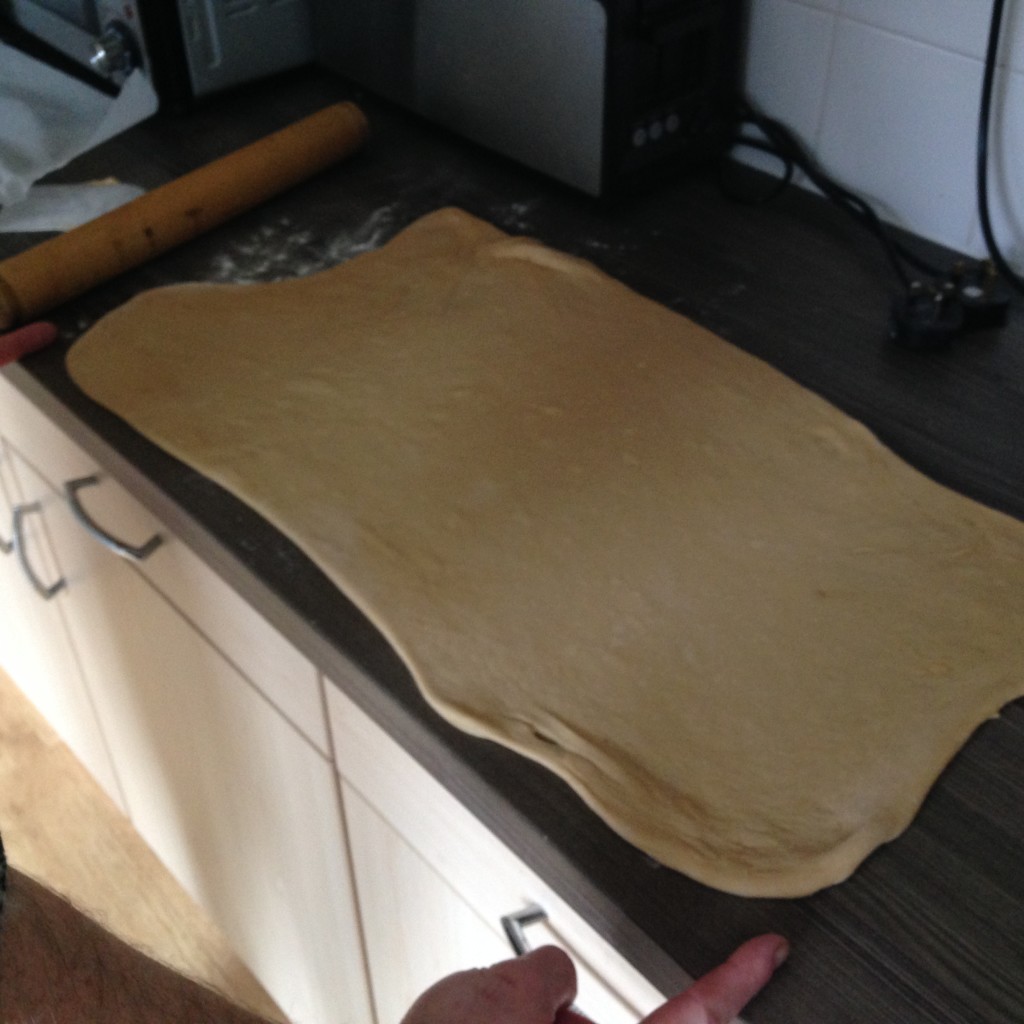 It helps if someone tells you how far to roll

Then the chocolate mixture goes on top. It was freshly made and spread easily…if made in advance it might get too thick, in which case a drop of hot water should sort it out. 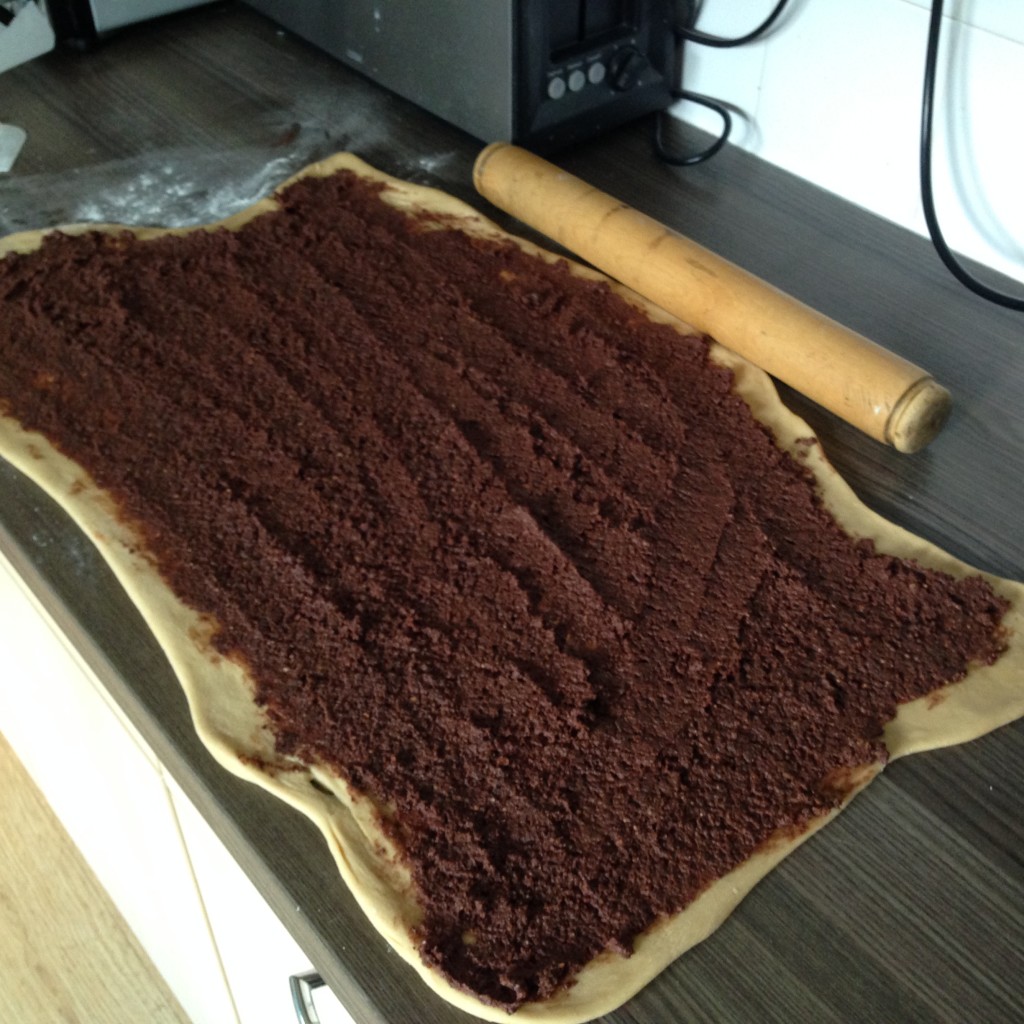 Spread the chocolate filling evenly on the top

Then it gets rolled up from the shorter end. Mine was a bit wonky, but it didn’t seem to matter too much. 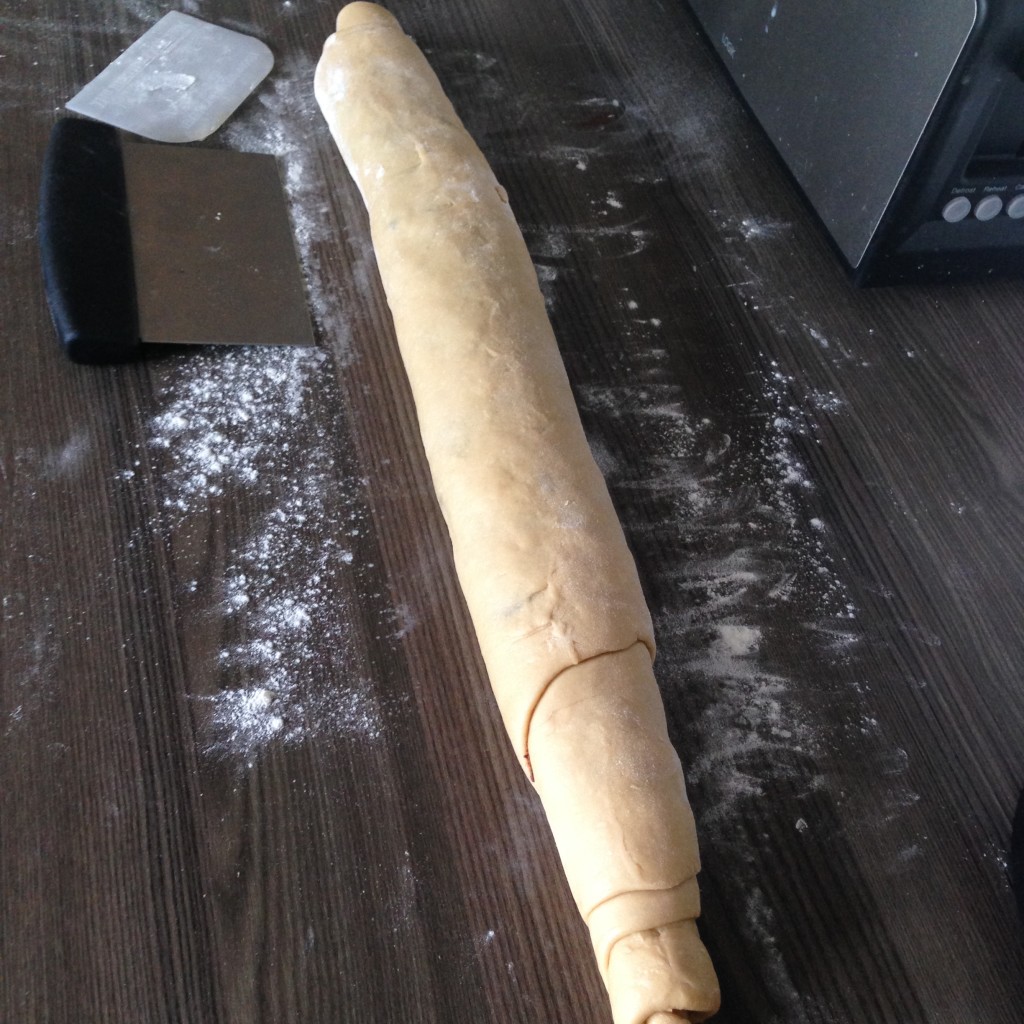 Roll up into a swiss-roll, working from the short end.

I then sliced it in half length-ways, using a metal scraper. The two halves then get twisted around each other, as tightly as is possible without losing all the filling. 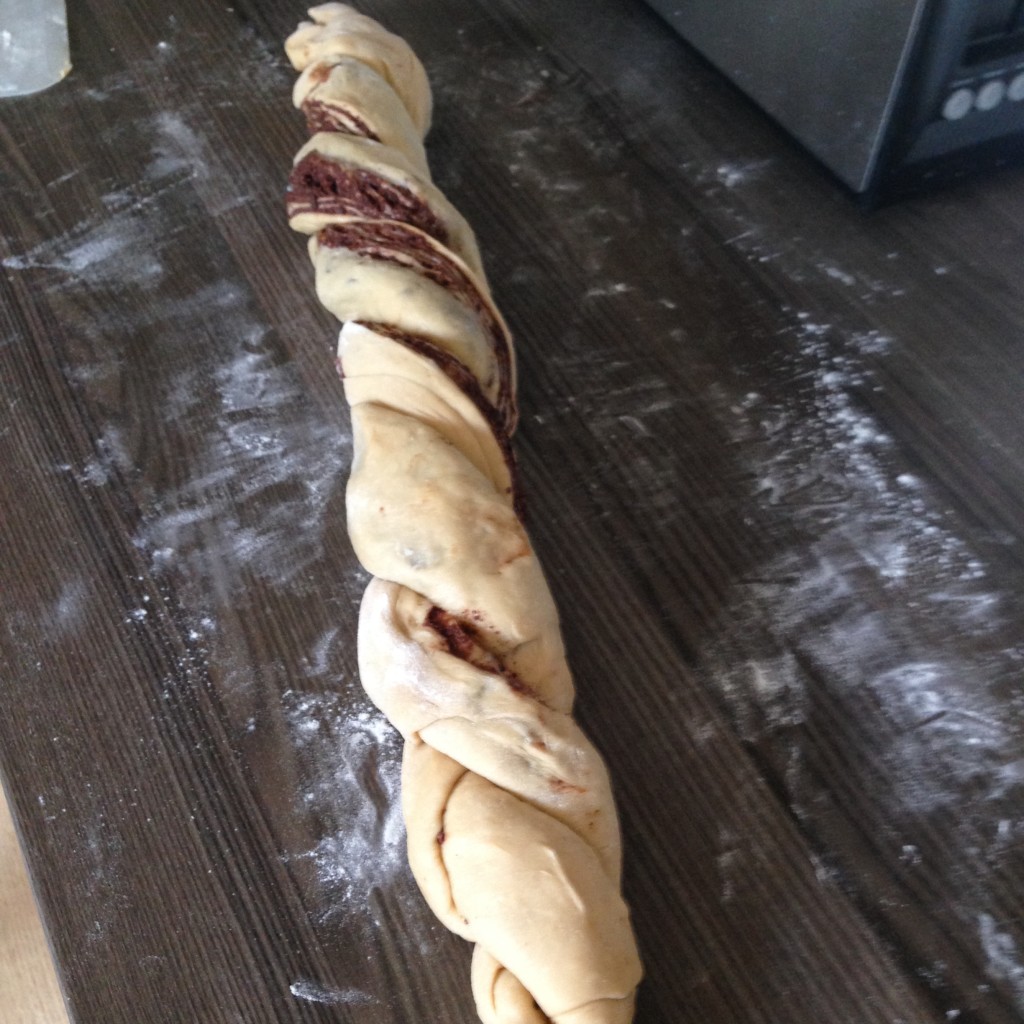 Slice in half then twist the two pieces around each other

Next, shape it into a circle, tuck the ends under and pop it onto baking parchment on a baking sheet. Cover (I use a linen cloth but you could use plastic film) and leave to prove again – this one took 45 minutes. It won’t grow that much in size, but will get nicely puffy and if you gently prod it, the indentation from your finger should stay put. 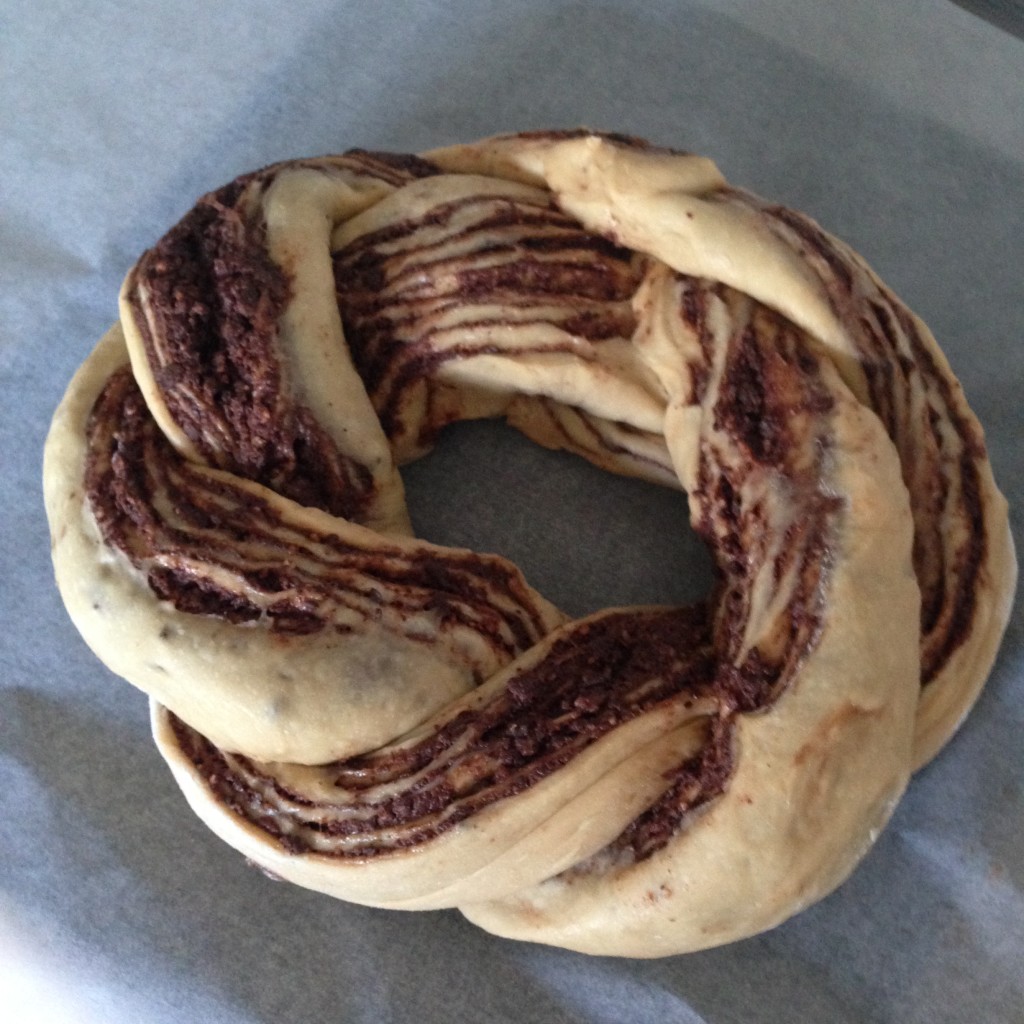 Before the second prove 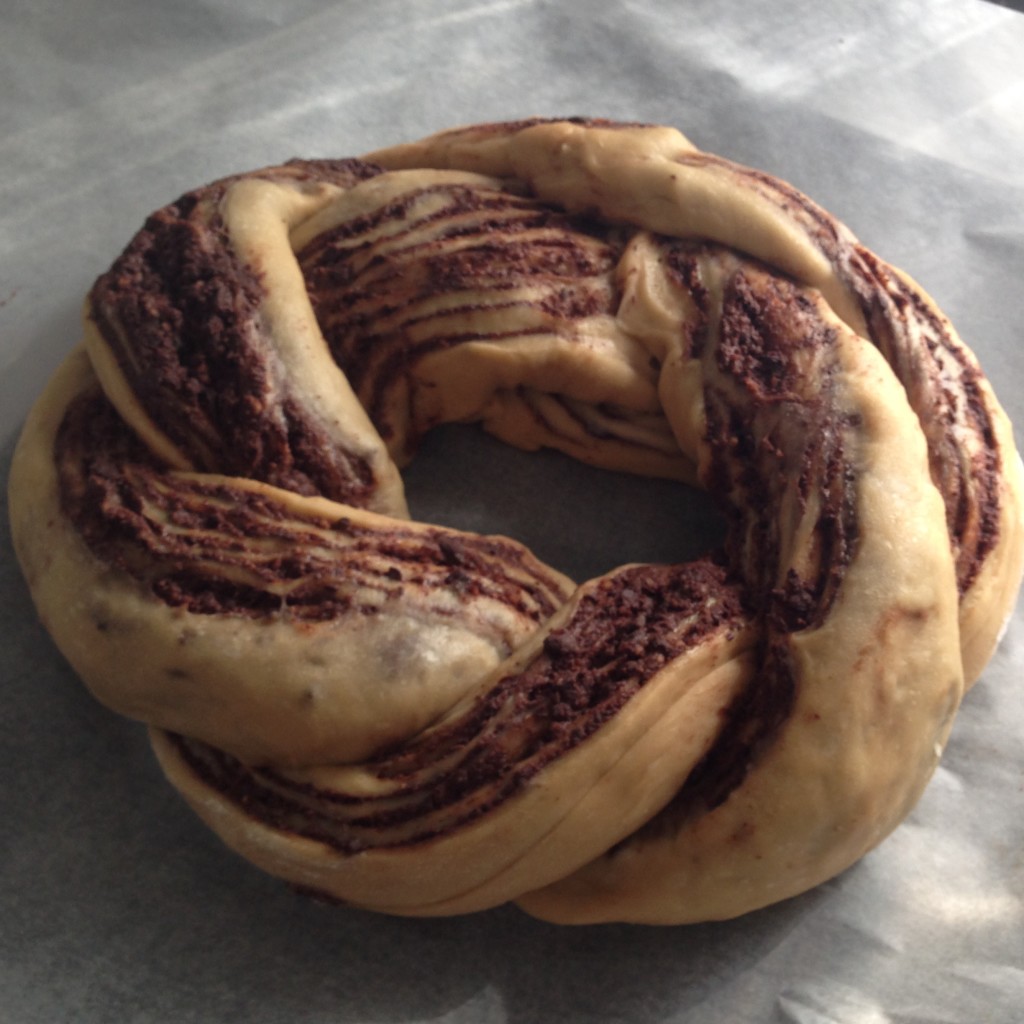 After the second prove

Preheat the oven – the recipe failed to give a baking temperature so I put it in at 200c. It took 45 minutes, but I covered it in foil for the last ten minutes to stop too much browning. It still caught a bit, though I think with all that chocolate and sugar this might have been inevitable.

The last step is to glaze. Bubble up dark brown sugar and water until syrupy, then paint it on. It’s then left for a few minutes, then glazed again. The sugar makes it taste treacly, so if you prefer a more toffee flavour use light brown sugar instead. Leave until cool until serving. 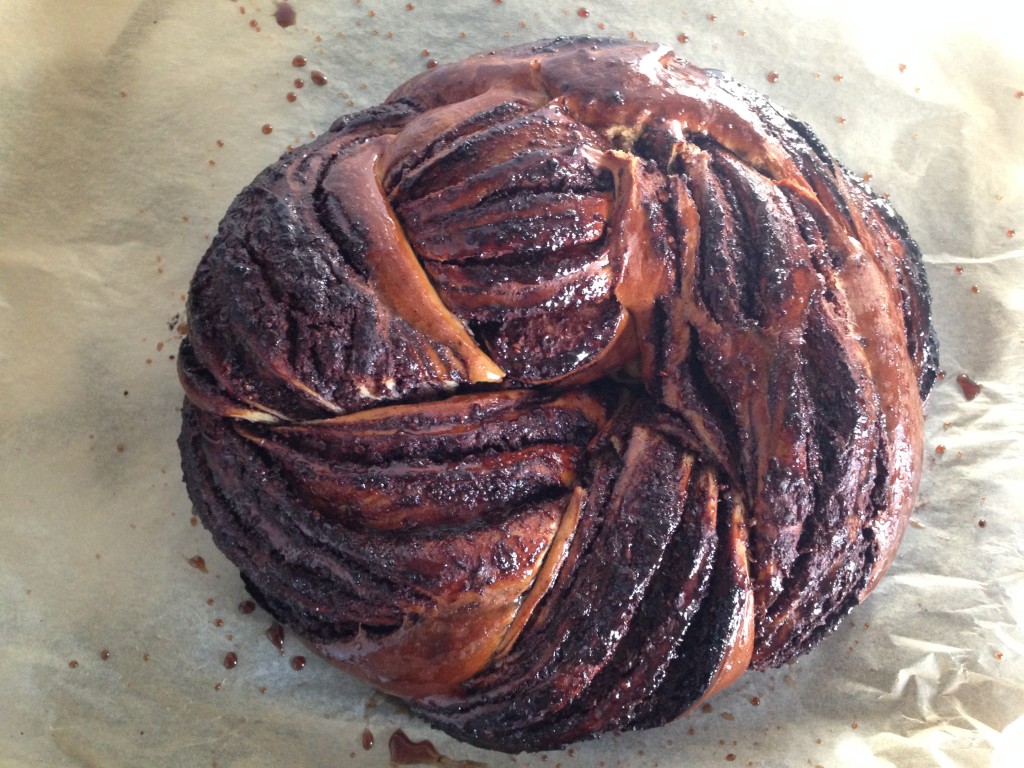 Out of the oven and glazed

It’s really, really good. The layers of chocolate keep the dough really moist, but there’s a nice level of crust around the edge and chewiness in the middle. Plus it looks really impressive.

Now that I’ve given it a go, it’s ripe for experimentation: the same base recipe could be adapted with almonds, marzipan, fresh and dried fruit. A great offering for a gathering or party. 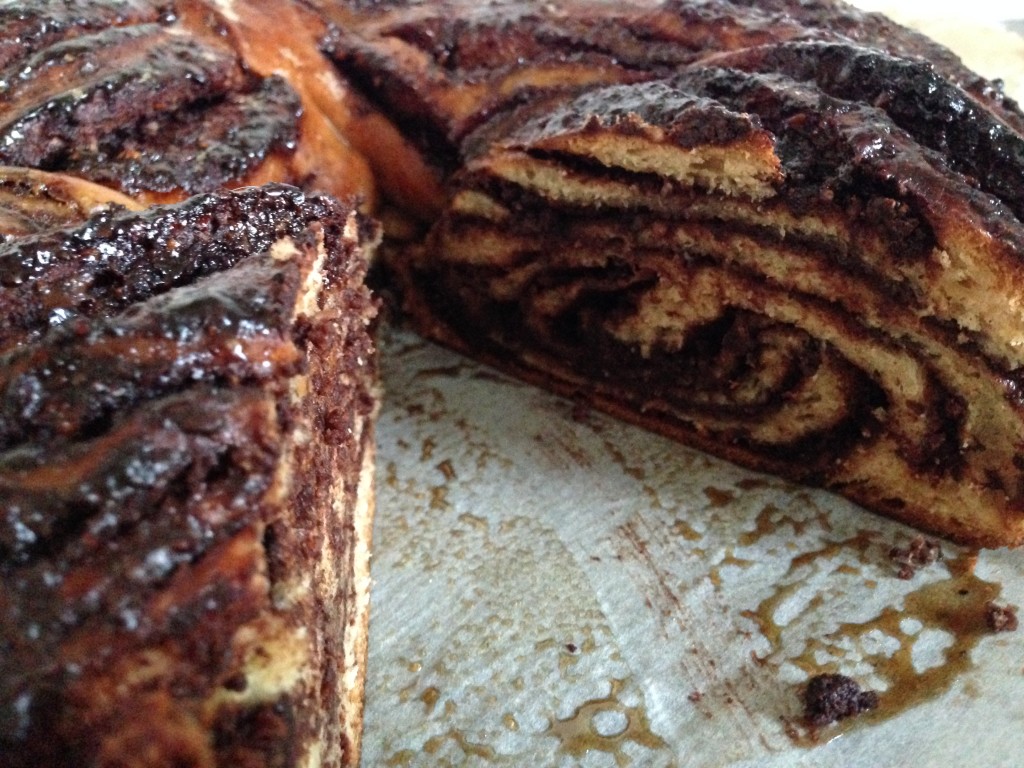 All swirly in the middle 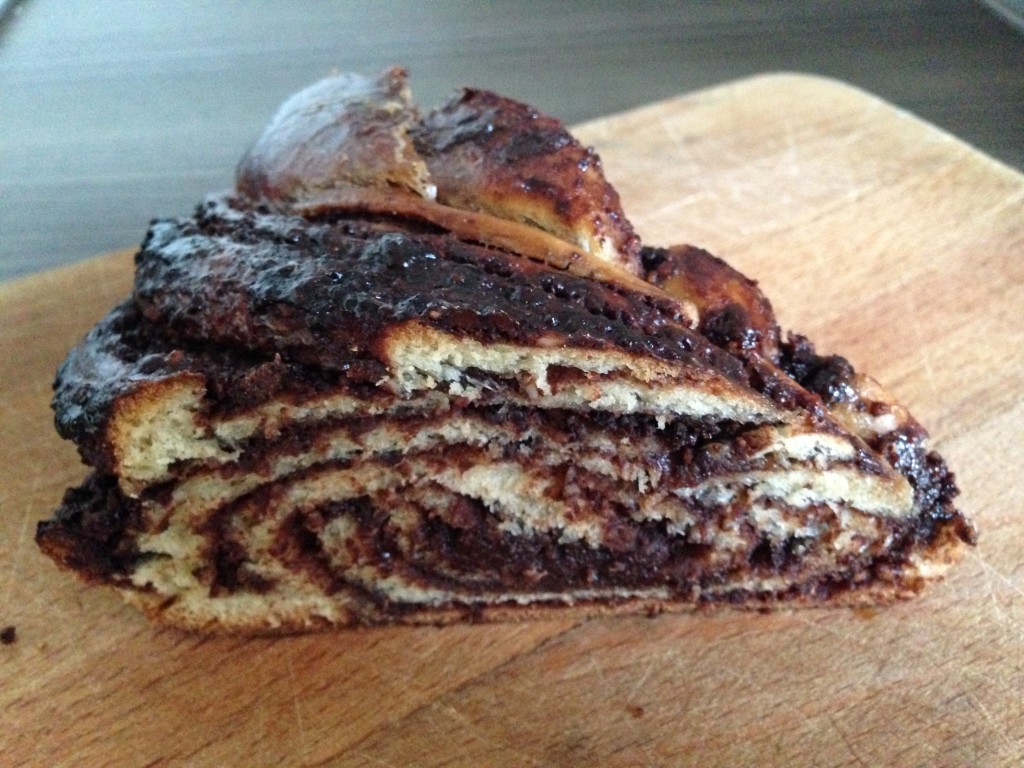 For the dough: Mix salt into the flour and sugar. Crumble in fresh yeast. Warm butter and milk together, add to dry ingredients with eggs. Mix to a soft dough and knead  until smooth and springy. Cover with linen cloth or plastic film, leave to prove for two hours.

For the filling: Chop nuts and chocolate in food processor, add everything else and whizz to a paste.

Very lightly flour the work surface. Roll the dough into a rectangle 60cm x 40cm – the long end should be twice the length of a long ruler. Spread the filling evenly on top. Roll up from the short end, using a plastic scraper to help. Smooth the roll out into a long sausage shape. Using a sharp non-serrated knife or metal scraper, slice it in two lengthways. Twist the two lengths together and draw them together into a circle, tucking in the ends. Transfer to a baking tray lined with baking parchment. Cover again and leave to prove for 45 minutes.

Preheat oven to 200c. Bake for 45 minutes, covering with foil after 25 minutes to stop it browning too much. Make a glaze by bubbling sugar and water together for five minutes or so. Glaze the couronne when it’s fresh from the oven, leave for  five minutes then glaze again. Cool before eating.

One thought on “Chocolate-hazelnut couronne”