There are certain fruits and veg which are foghorn signals of the season. For May there’s Evesham asparagus, for late January it’s Seville oranges. At this time of year, the hunt is on for the first cobnuts. On Thursday I found them in, of all places, Waitrose in Harborne, unceremoniously dumped underneath stray packets of chilli and coriander. I actually said out-loud “cobnuts!” and then remembered I was in public.

The shop assistant lugging around sacks of potatoes must have heard the exclamation for he sheepishly came up to me and, excusing his intrusion, asked what does one do with cobnuts. He said he’d been waiting for someone to pick them up so he could find out. I am SO his girl. For the next five minutes he got an impassioned monologue on all the brilliant things to do with cobnuts, how they can be used in salads and baking or just eaten raw with a beer, but how they are a total b*stard to peel.

Today Matt’s at work so am home alone. One thing for it: let’s attack these nuts. 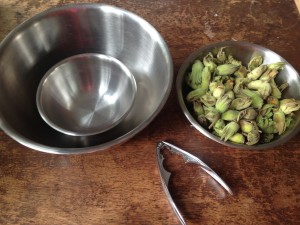 Conuts need two, sometimes three layers of peel removing. First take off the papery outer husk, then crack the shell to get to the kernel. Sounds easy (it is easy) but takes AGES.

I had a helper

Then you get to the papery brown final layer. This has always confounded me – steam it off? Pick it off? This year I got luck as these were so fresh that most of them didn’t need the third peel. So three hours after starting, we get a bowl of nuts. 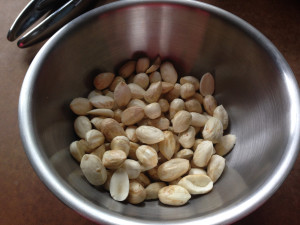 Is it worth it? Well I think so, but I like meditative cooking. It’s not dissimilar from double-podding all those broad beans back in June; a way of feeling grounded and connected to the seasons.

These have now gone in the fridge but will be toasted in a dry pan and then used in a salad of dolcelatte and watercress with a mustardy dressing. Autumn is here.