We got back from a blissful week in Cornwall to a work sh*tstorm – why is this always the case? – the result of which is that I’m now sick with summer cold. The trick is to not get too drawn in; to have the confidence to take criticism (fair or otherwise) in good grace and to try and pass that skill on to the youngsters now coming up. And in the meantime, rather than dwelling, there is watering and harvesting to be done.

Every year I say this, but I’m always surprised by how late our allotment comes together. It’s now the start of July and it’s only this week, really, that I’m getting our first proper food harvests of the year. The broad beans are the best I’ve ever grown; tall and lush, with no hint of black fly, and because I succession sowed we still have a few more weeks of picking still to come. Harry and I picked a bowlful of redcurrant at the weekend and so, with the fresh green salad leaves and edible flowers (calendula ‘Indian Prince’ and viola ‘heartsease), it feels like summer is truly here. 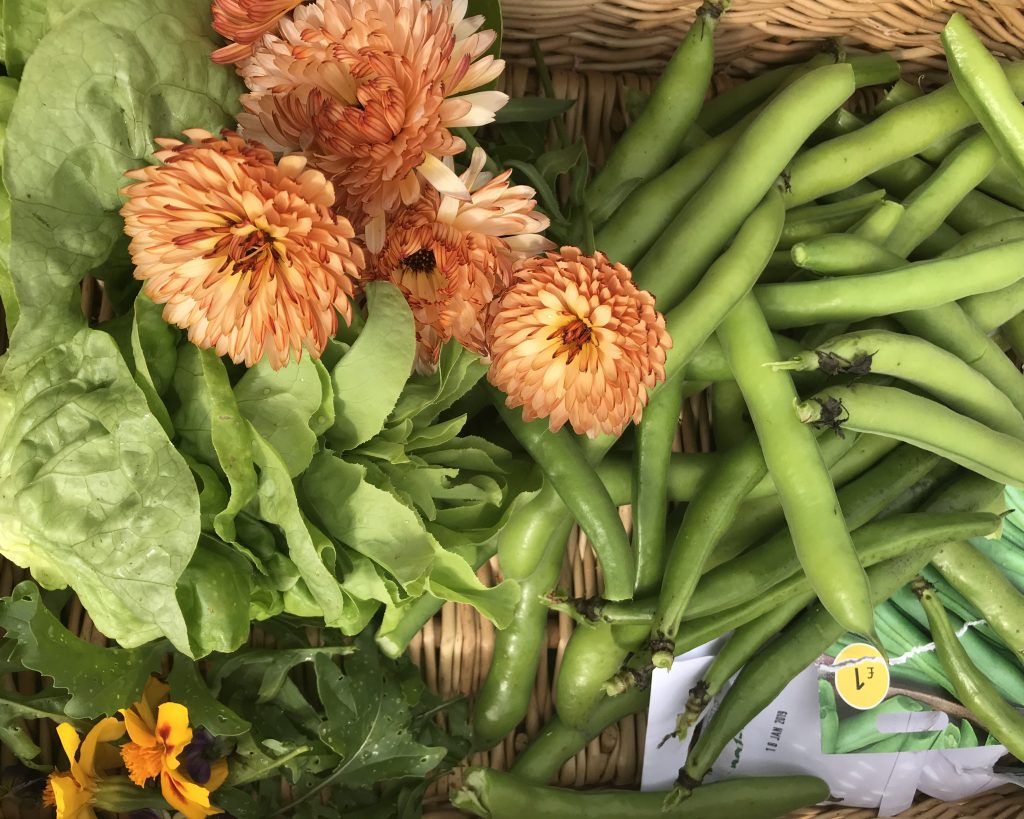 We’ve had some cut flowers already (sweet william, foxgloves) but the next tranche is approaching its peak. The ammi, cornflowers and strawflowers in particular are thriving, and the sunflowers are now picking up after the cold May and early June. The cosmos and cleome are abysmal, perhaps from being planted out too soon, or from not liking the cold spring. It is curious how one can feel grief when a flower fails: the opportunity lost, the effort that has led to disappointment. 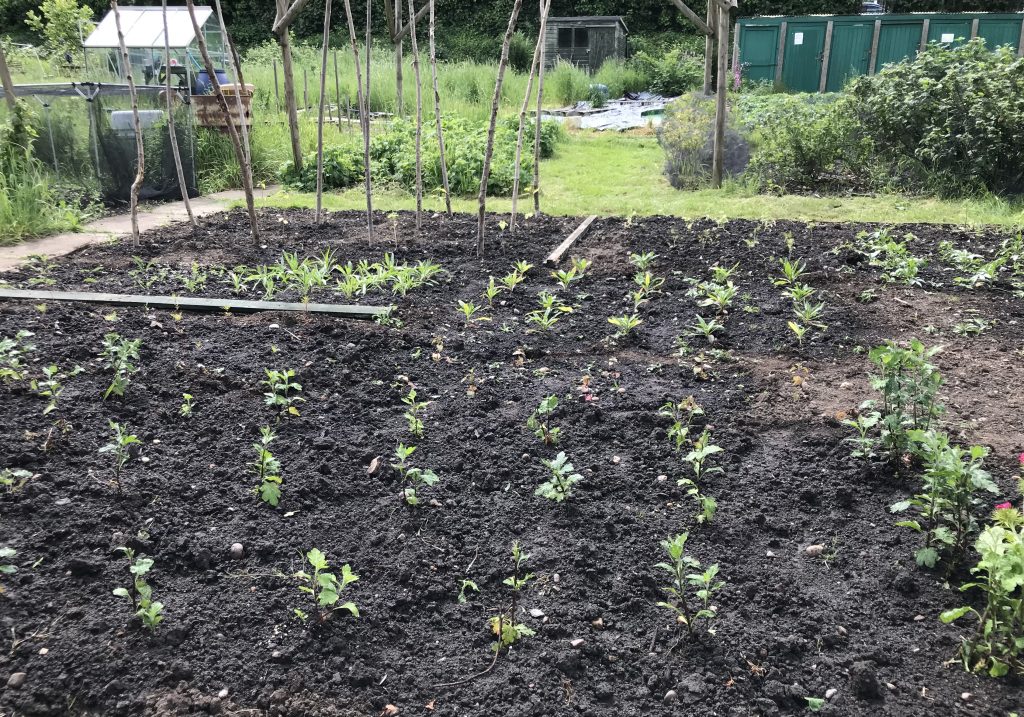 The flower patch on June 1st… 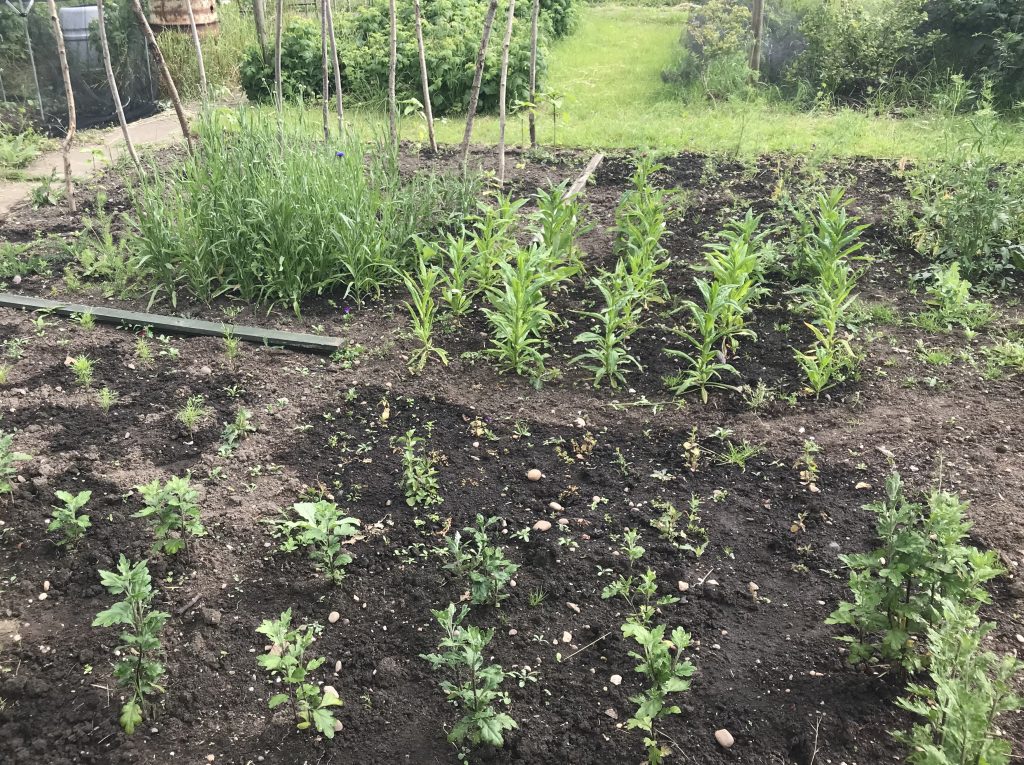 …and July 1st. The cornflowers (back, left) and strawflower (back, centre) are doing well.

I’ve had to direct sow a load more beans (borlotti, French, runner and dwarf) after the pigeons ate the first sowing and the slugs got to the second. This time I have remembered to net the entire area. Speaking of pigeons, they’ve also managed to decimate the cavolo nero by pecking through the brassica cage, which is my own fault for letting the plants grow too close to the edge of the netting. The rocket did not like the change from cold spring to heat AT ALL and bolted almost instantly; it’s nearly too spicy to eat now but I’ll leave the flowers be for a few weeks for the insects. 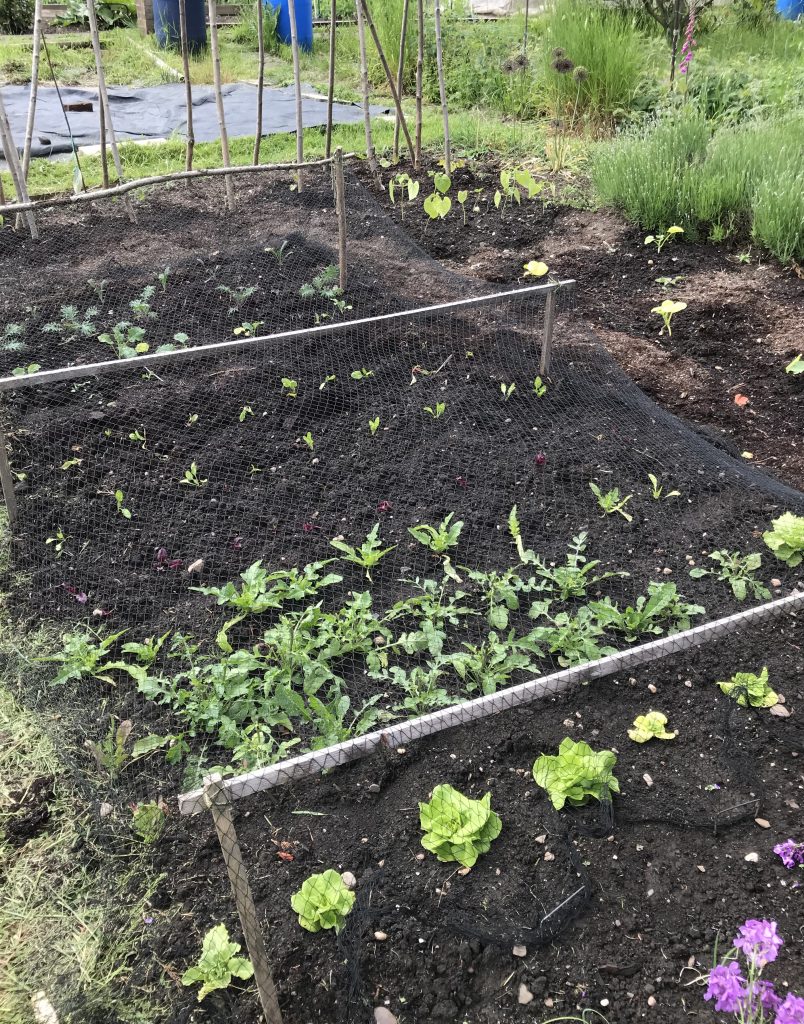 The veg patch on 1st June… 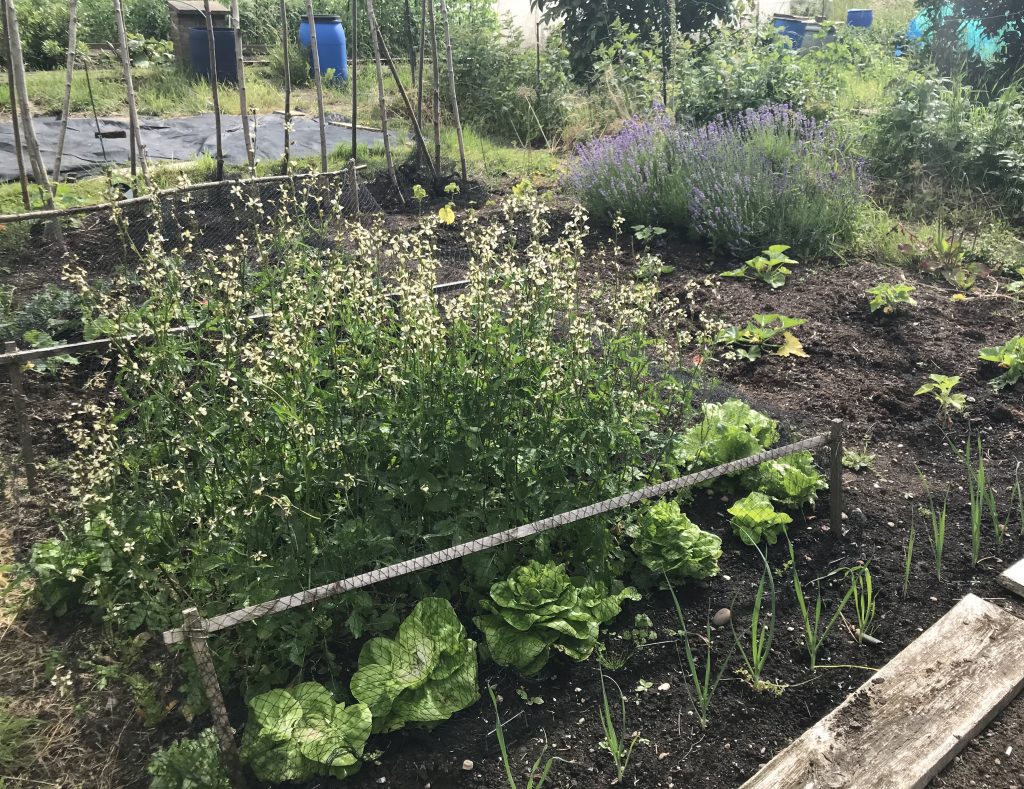 …and on 1st July. The lettuces and brassicas are doing well, rocket has gone to seed, leeks and courgettes are fine but (as usual) the beans are struggling

The star of the show is the sweet William. From one sowing of seed in 2016, they are incredible: there were no flowers in 2017 but then in 2018 they put in an amazing performance, which they’ve matched again this year. They last for weeks in the vase and smell divine. One of the best things I’ve ever grown. 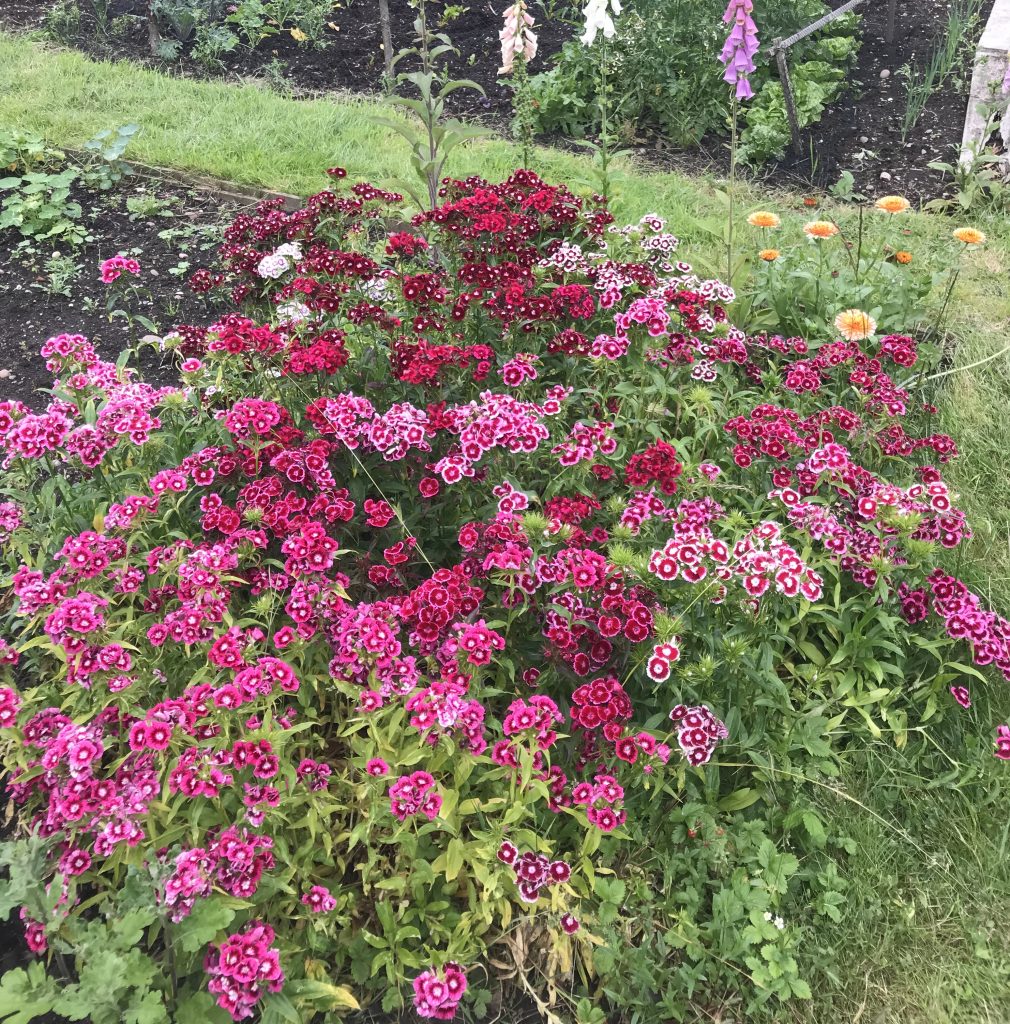 Sweet William are at their peak now

Also doing well – of course – is the wilderness. It’s now a mess of creeping, unkillable brambles, 6-foot tall stinging nettles and grasses. Amazing how the plants we grow ourselves, so mollycoddled, can fail and yet this area is actually kind of frightening in its fecundity. In just a few weeks, the space where the greenhouse was (and will hopefully come back to once it’s been rebuilt) has become like the Lost Gardens of Heligan, with a tuft of grass grown taller than me and with bramble taking up residence. The buzzword in gardening at present is Rewilding and we are achieving this with no effort at all. 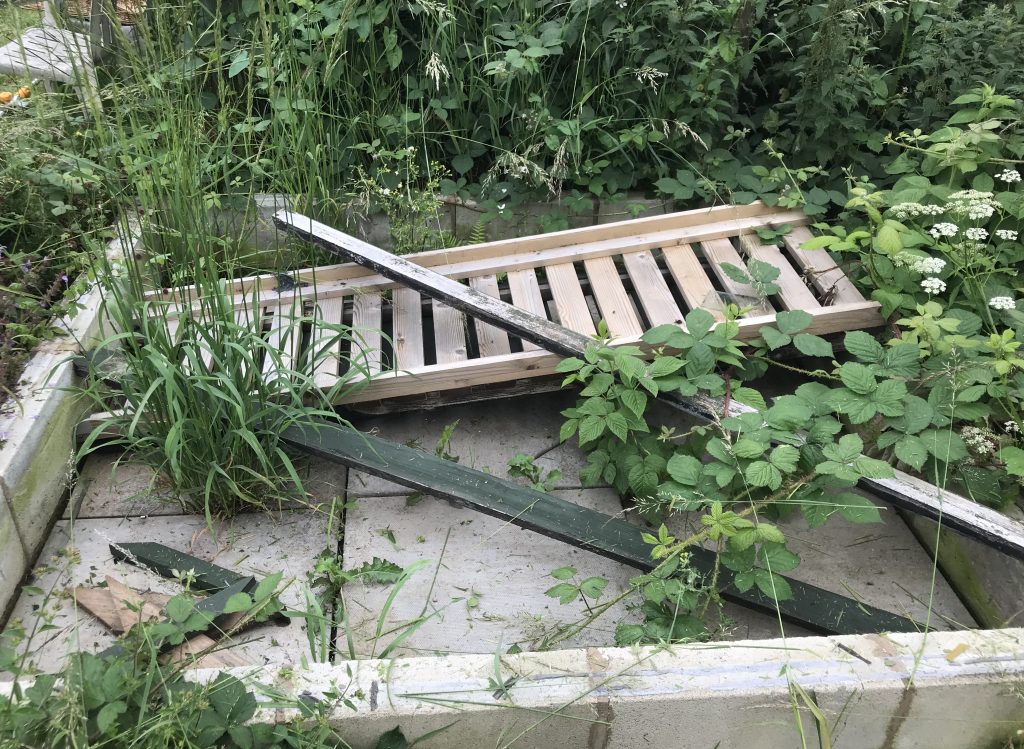 The greenhouse base has already been taken back by nature

I mentioned holiday. The week before last we were in Cornwall, glorious Cornwall. I meant to publish these images last week but didn’t get any desk time (did I mention the sh*tstorm?). 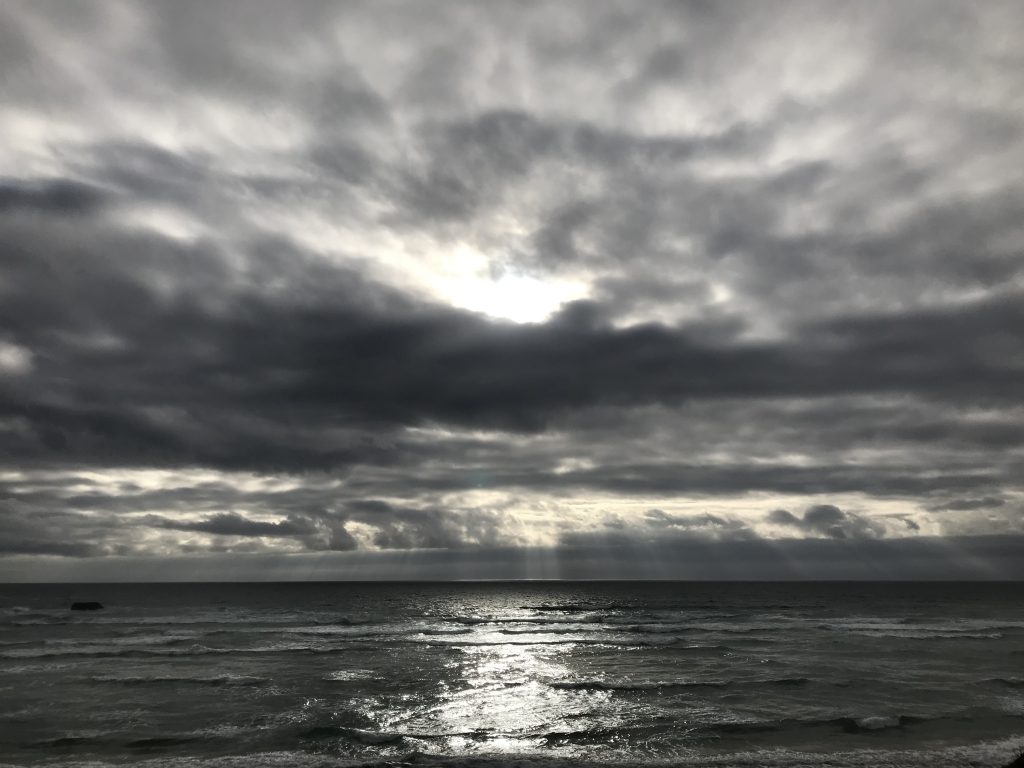 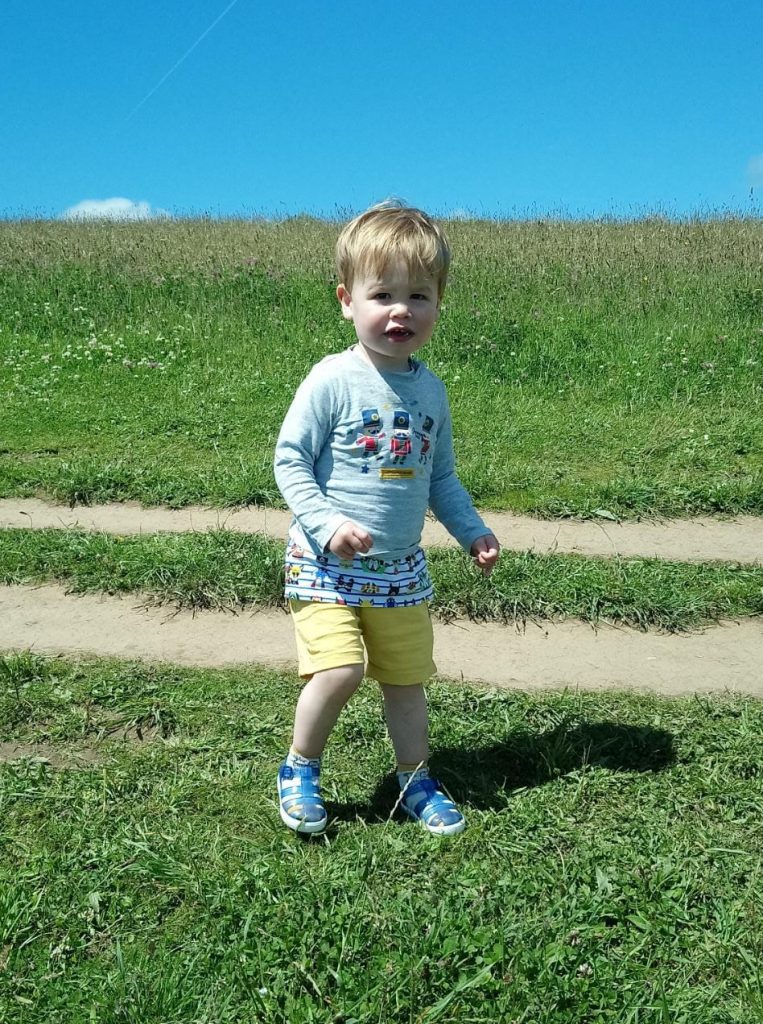 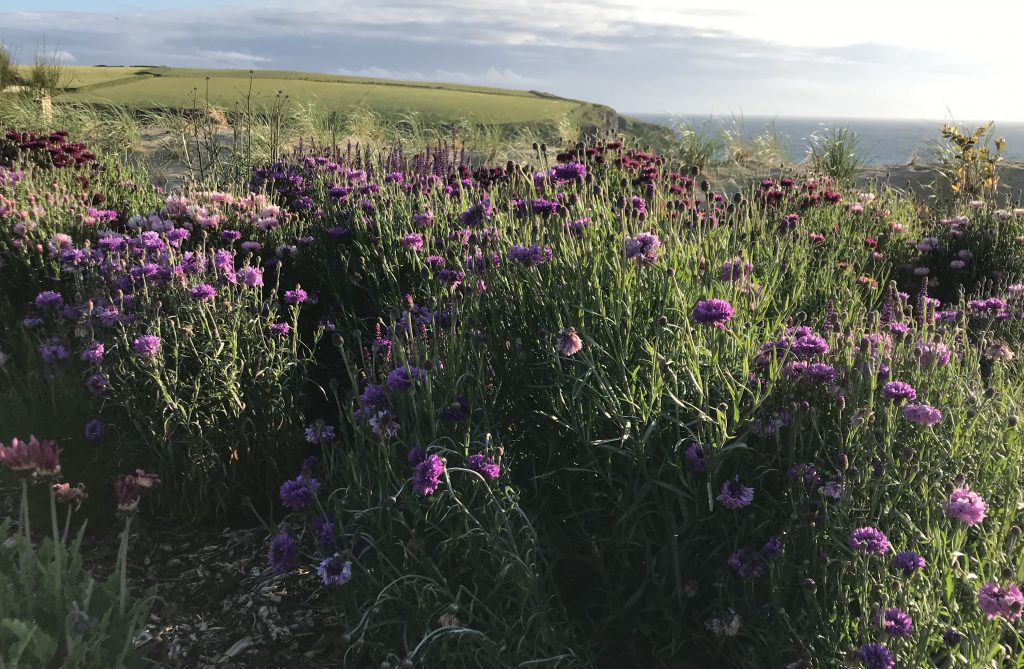 A sea of cornflowers planted on the cliff above Mawgan Porth

Cornwall in June means wild flowers, which are in colourful abundance right now. As it’s coastal, the timing and genus of plants are quite different from the ones we see at home. Here’s a pick of my favourites. 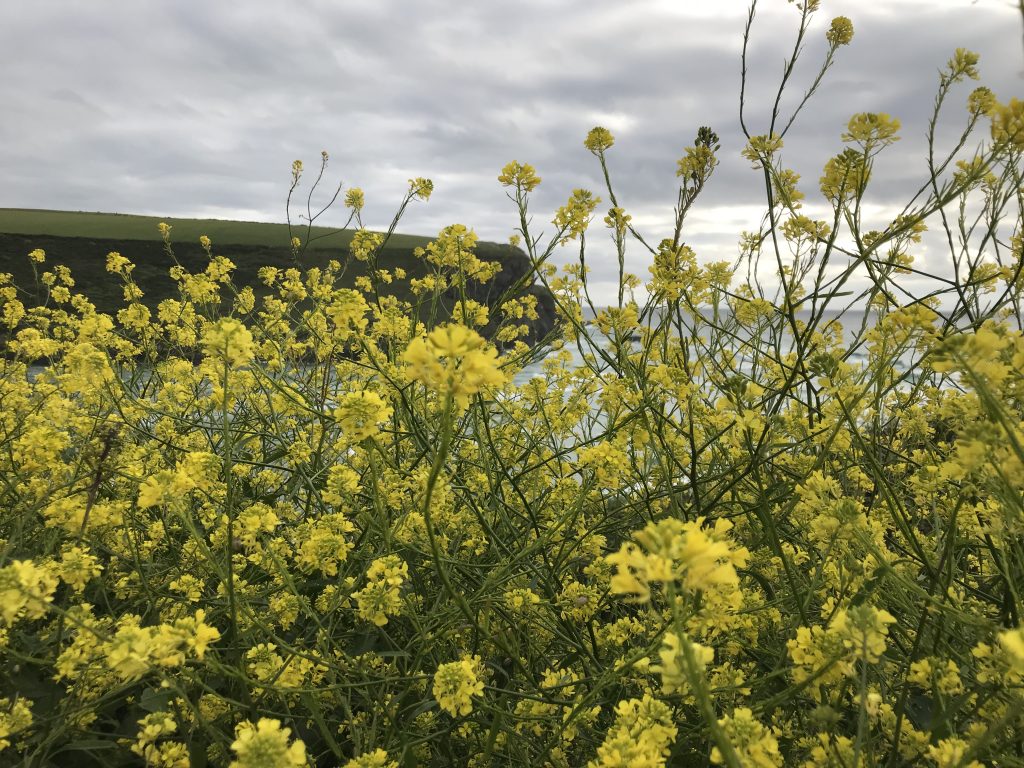 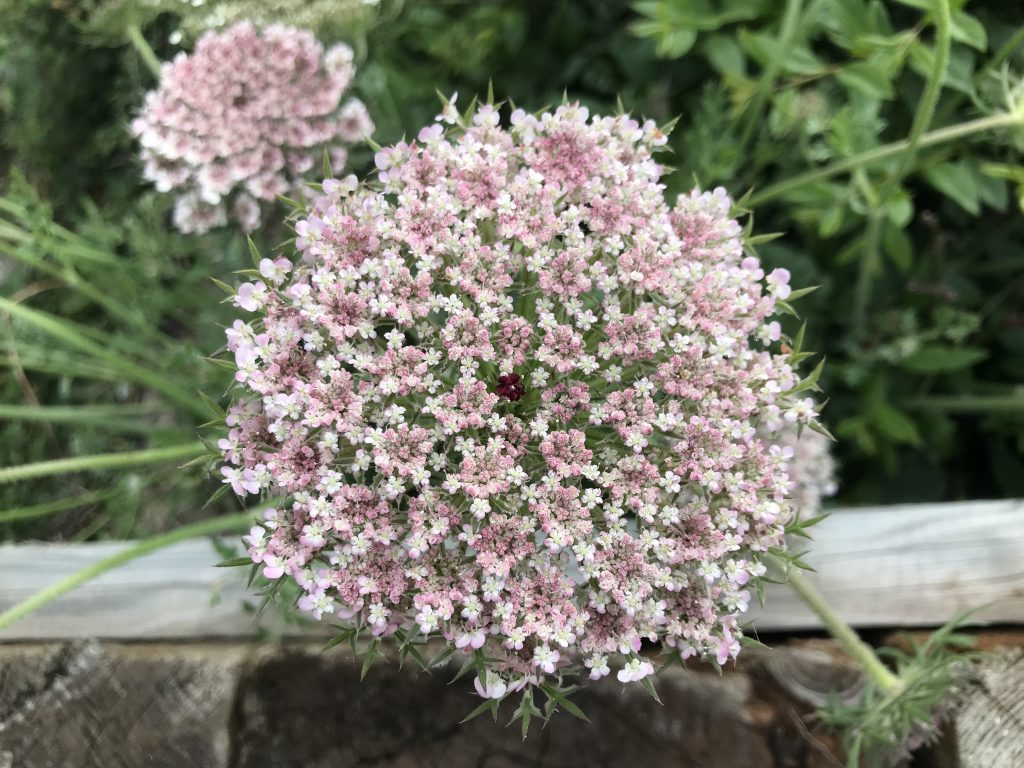 Some kind of umbellifer – notice the tiny, lone red flower amongst the pink and white 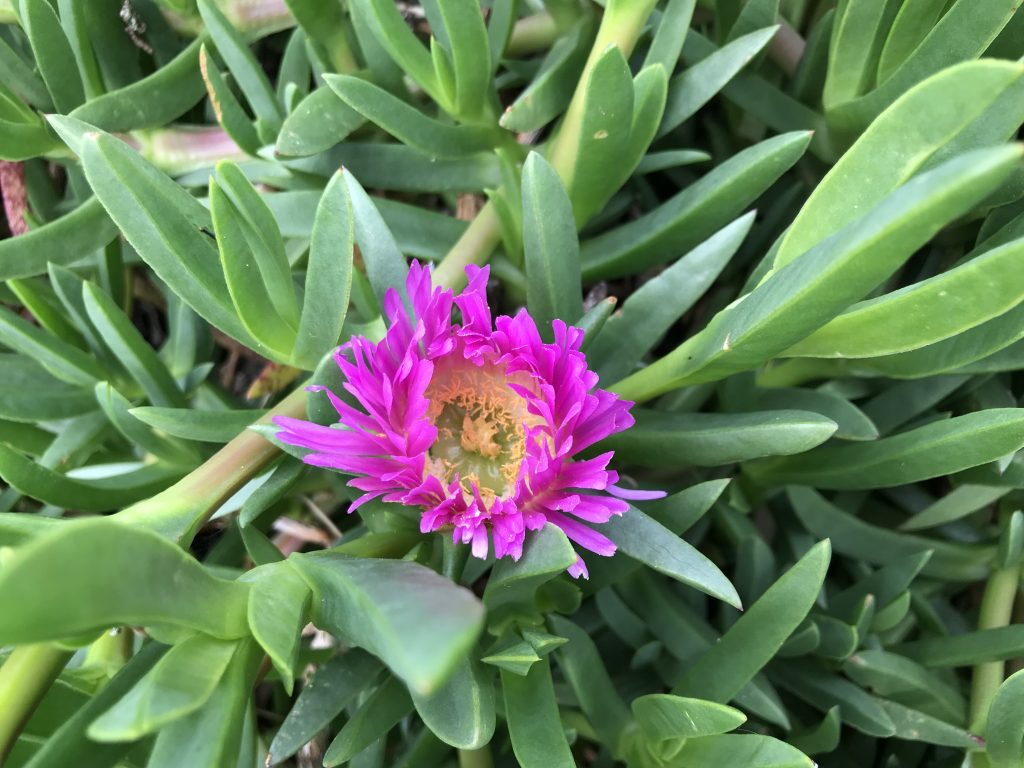 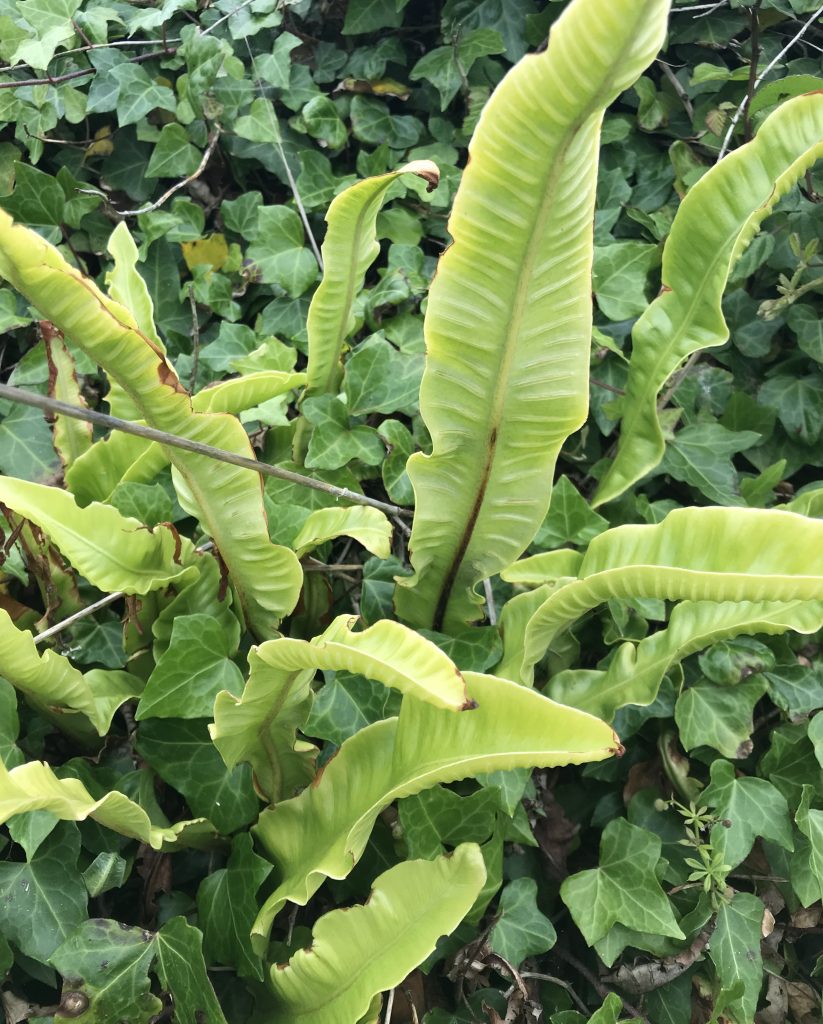 Anyone know what this is? It grows all over the place but looks like a garden escapee 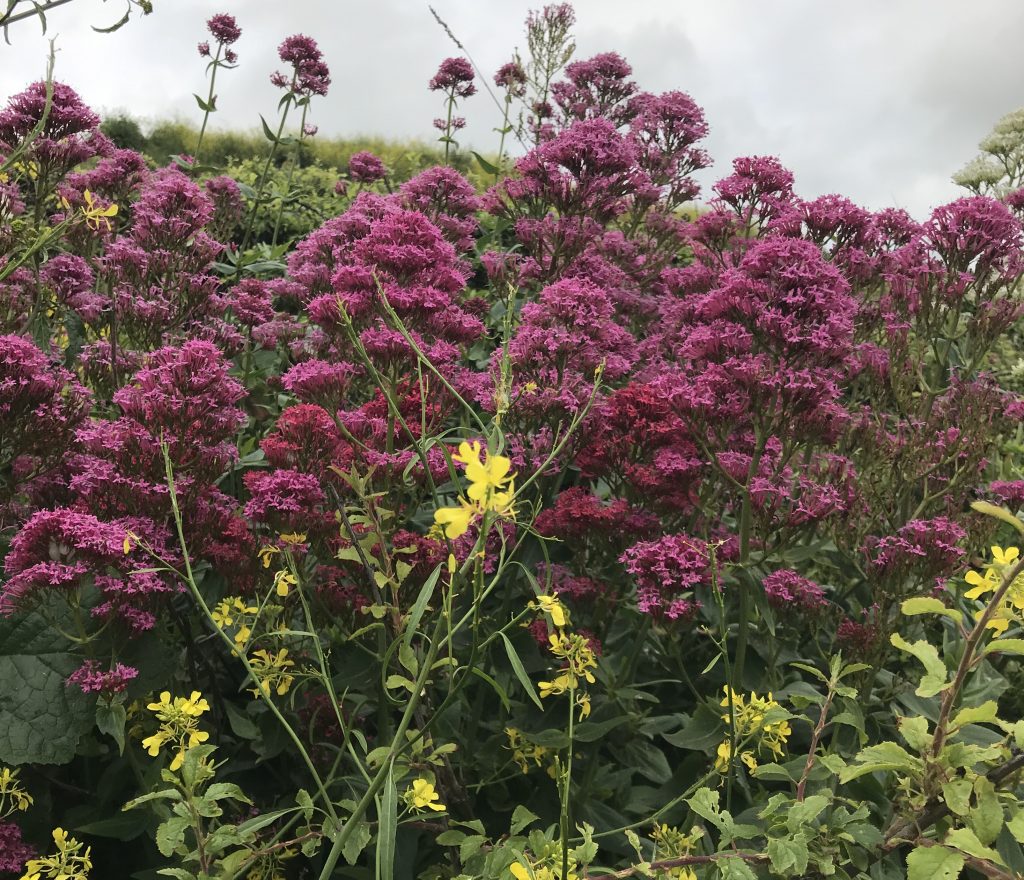 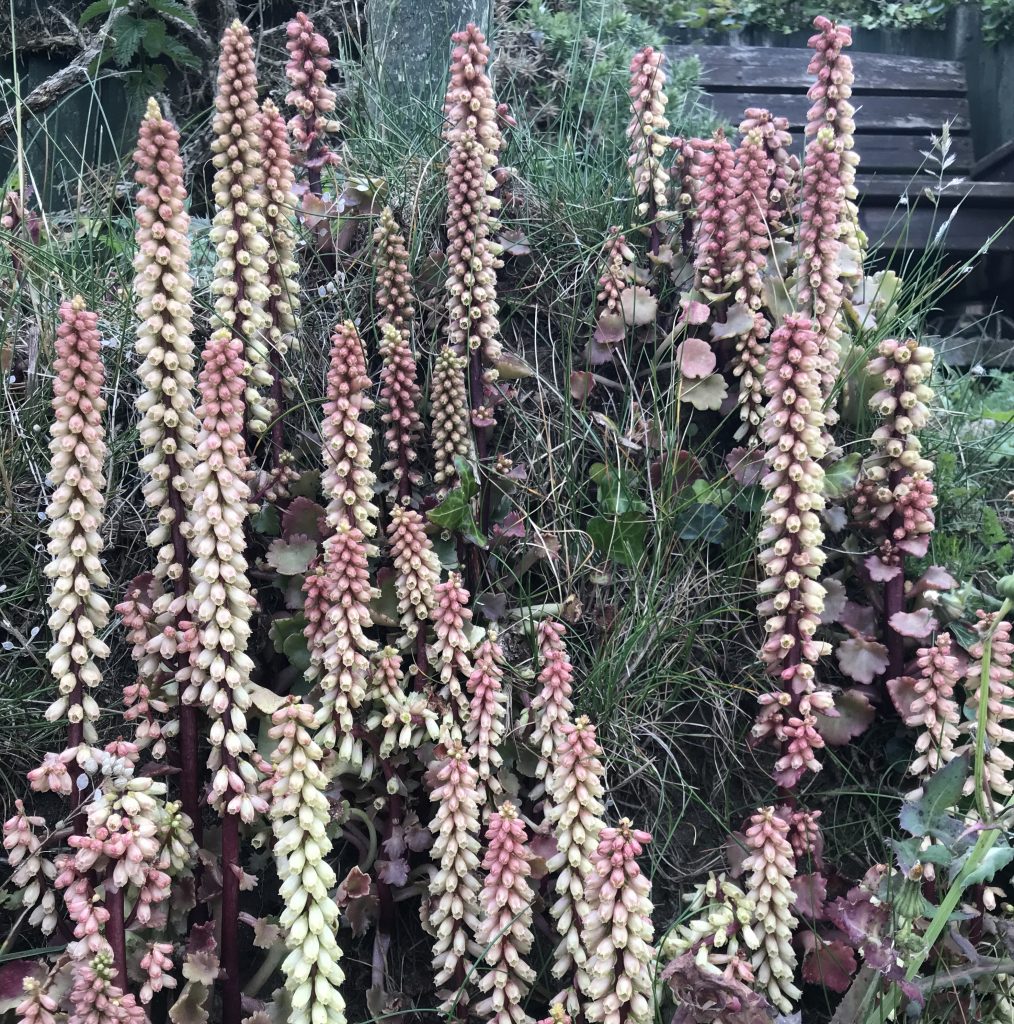 Another mystery plant that is abundant

But my ABSOLUTE FAVOURITE is the echium pininana, or ‘giant vipers bugloss’. It’s another garden escapee that must love the Cornish climate because you can see it on roadside verges all over the place. It’s actually a native of the Canary Islands, and is related to the much much smaller echium vulgaris, the regular ‘vipers bugloss’. The light on this image does not do it justice so trust me that the spikes are enormous, at least 8 foot tall, and covered with little blue-purple flowers that the insects adore. I know it’s daft, but obviously I want some  echium action in my life so I’ve spent a whopping £6 on a packet of seeds and am giving it a go, in the hope that next year our garden/allotment can have a little (well actually, quite a lot) of a Cornish feel about it. 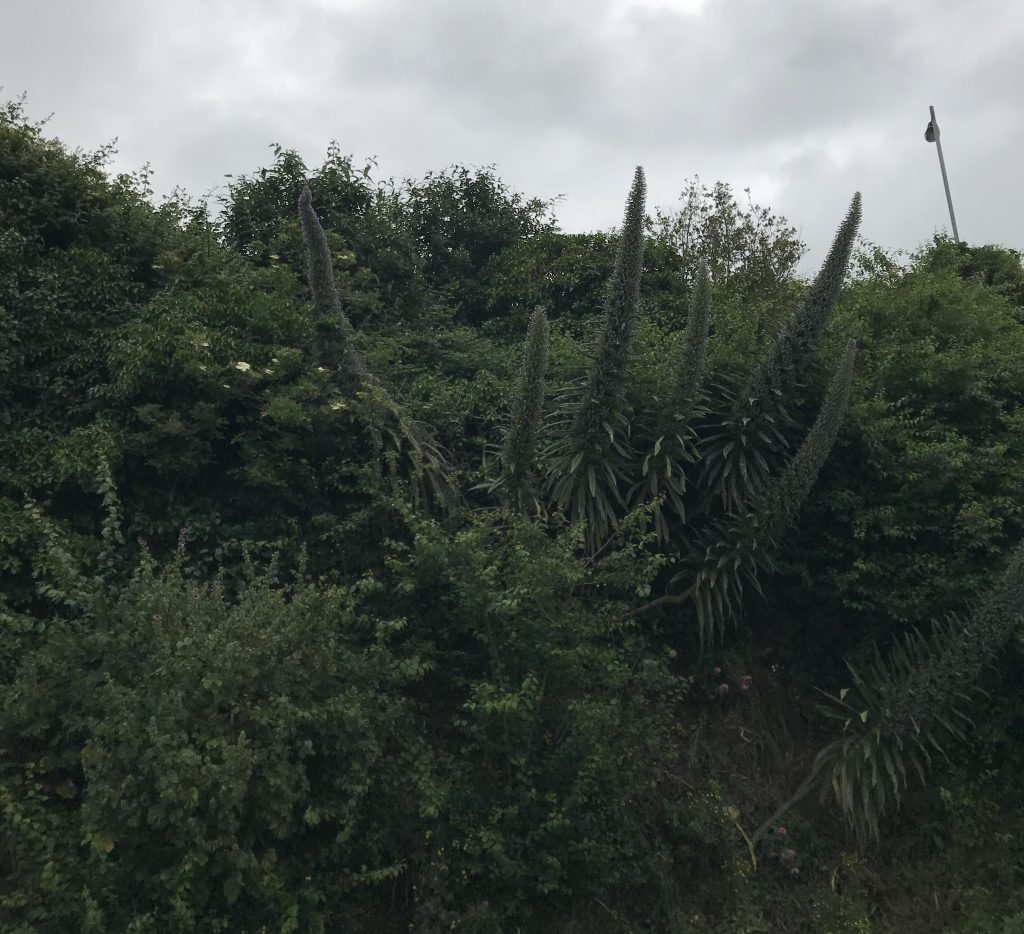 Sowing and planting: Direct sowed more beans: runner, French, borlotti and dwarf. At home, putting in perennials in the hope of filling in the border, notably cat mint and fennel from the Duchy nurseries in Lostwithiel. Tomatoes are staying in the cold frame as the greenhouse isn’t ready; will be interesting to see how they do in small pots as a bit of stress can lead to tastier tomatoes. The slugs finished off the brachyscome multifida (daisies) that I sowed back in February so I’ve filled their pot with a lovely penstemon and some cat mint. Potted on the salvia, basil and baptisia australis seedlings. Lots of watering now as temperatures hit over 30c at the weekend.