After a week of chic Amsterdam loft-living, we’re having to get used to living in a Victorian terrace again. We were in town to visit the world-famous Keukenhof garden (about an hour out of the city), but the trip really turned into six days of mainlining carbs, reading, not-being-emailed-constantly and quality time with my man (a novelty as he works all the time).  I booked the flights back in January, when the desire for spring flowers had reached obsessive levels, only to find that by the time the trip rolled around, Britain’s spring had already been in full flow for at least a month…this rather took the edge off the urge for tulip-spotting.

No matter, for I quickly replaced one obsession with another: namely, the art of how to make a perfect Dutch appeltaart. 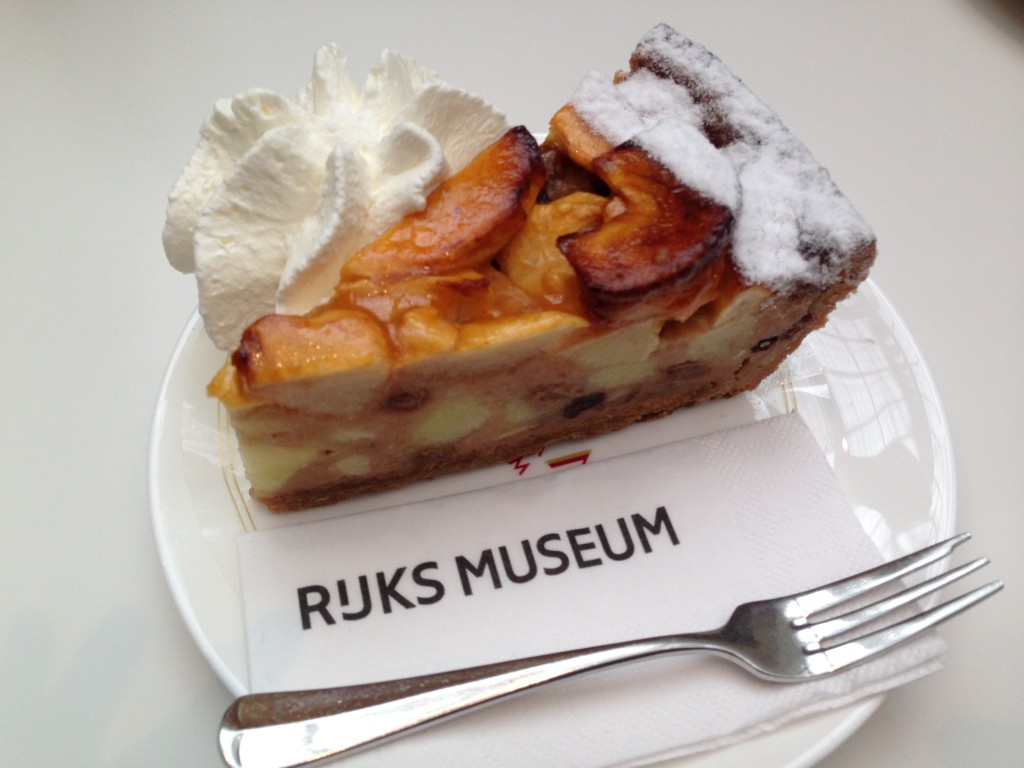 Appeltaart at the Rijks Museum

Appeltaart is the dessert of choice for Amsterdammers, and I spent the entire week studying different versions to work out how it’s made. The pastry is cake-like, deeply filled with cinnamon-spiked chunky apple and raisins, and topped with latticework. The apples seem to break down around their edges into a brown-sugary-mass that holds the chunks in place, so there’s a contrast of textures. It’s not particularly sweet, is always served cold in enormously generous wedges and (hilariously) comes with a side of slagroom (whipped cream). If I ever succeed in making a decent version at home I will blog the results.

One other thing to note about Amsterdam is that everyone is dressed like a contemporary art curator. They’re all on bikes, wrapped up in smart tailored wool coats, trainers and thick-rim glasses, off to some glamorous arts job or perhaps simply to a cafe to scoff appeltaart whilst working on their Apple laptops. And I mean everyone – even the kids look cool. The place is spotlessly clean and ordered, except on King’s Day, when the city dresses up in orange, gets leathered on Heineken by 11am and congregates on party boats trailing around the canals with euro-pop and Wham! at full blast. But by 8pm, it is all over and everyone goes home for their tea. In Holland, it seems they like to lose  control in a very controlled fashion. 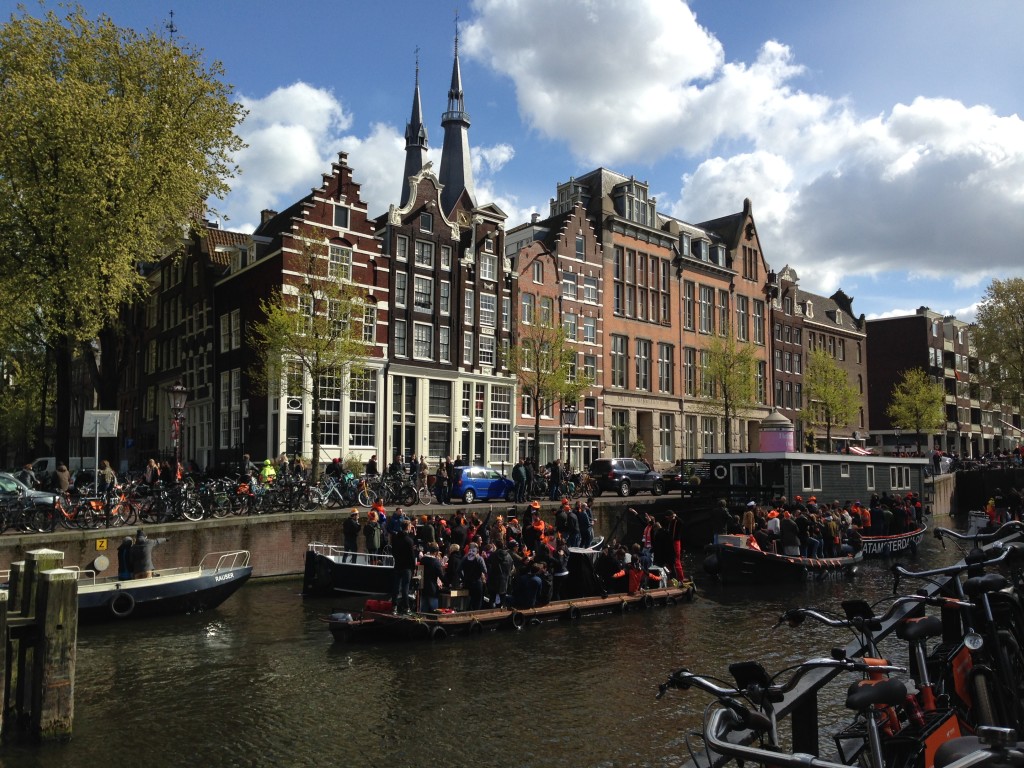 Our loft apartment was painted entirely white, overlooked a canal (naturally) and was a short walk from a super-trendy street of independent trendy boutiques and classy food shops. I am sure that not everyone in Amsterdam lives this way, but for the few days we were there, it felt the height of civilisation.

But we were there for the tulips and it is the tulips that I must report back on. The Dutch LOVE tulips and they express their love at the Keukenhof, which is apparently the largest flower garden in the world. It’s only open for two months of the year, from March to May, and is essentially a massive trade show for Holland’s enormous flower industry. The formal beds of spring flowers and indoor pavilions are designed to show off the latest and favourite varieties of tulip, hyacinth and daffodil from individual bulb producers, and they do it with pristine attention to detail; we spotted a gardener placing metal rods into individual hyacinth stems to keep them upright. Imagine repeating that several million times, for that’s what it takes to keep this place looking great for spring flower season. 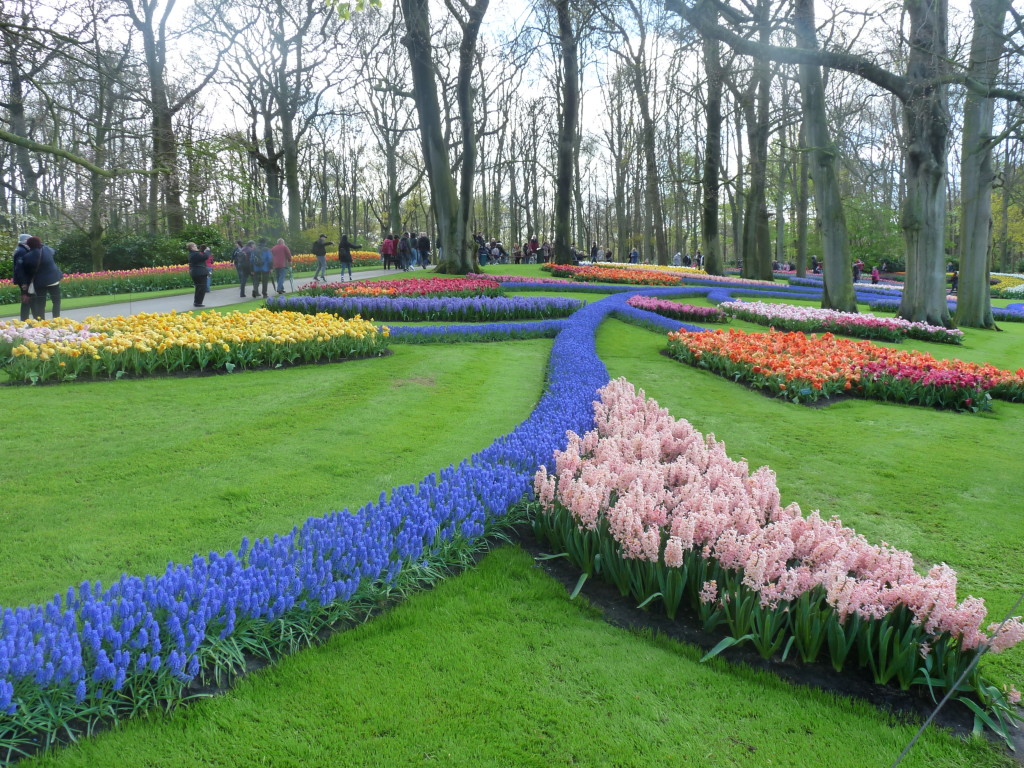 At the Keukenhof, strips of ornate planting jut up against blocks of colour 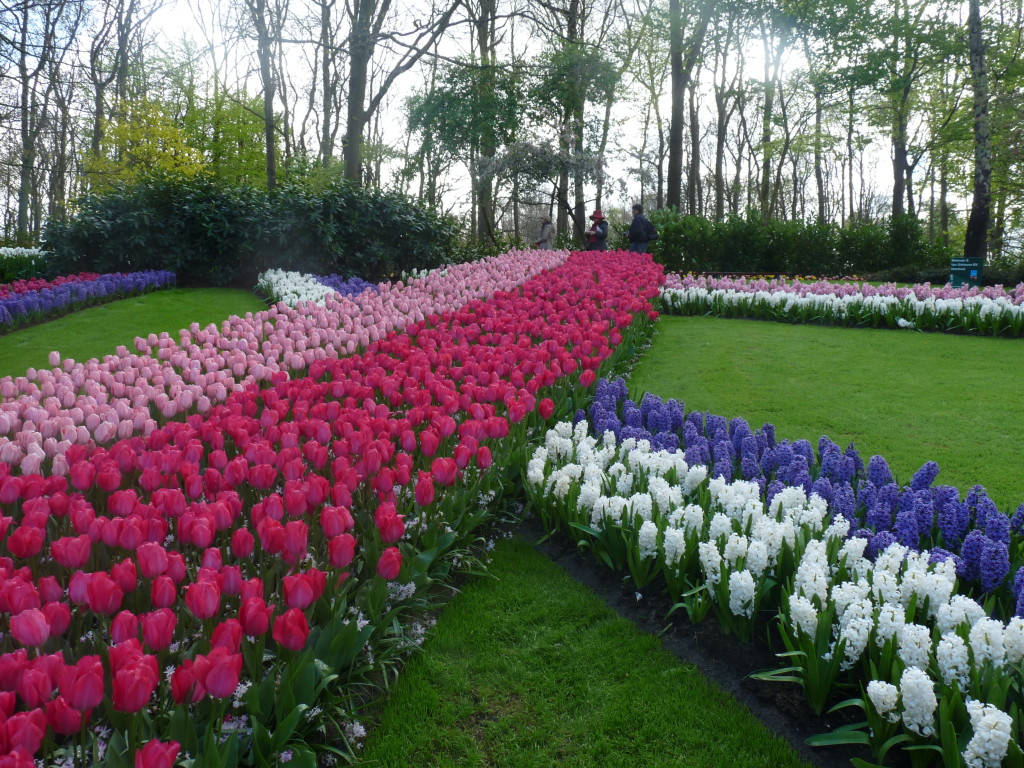 The geometric ‘designed’ beds are a useful way to highlight individual colours of tulip and I soon picked out a few favourites. The deep, inky-purple shades are dramatic, especially when planted against candy-pinks, but I’m increasingly enamoured by pale yellows, creams and greens. 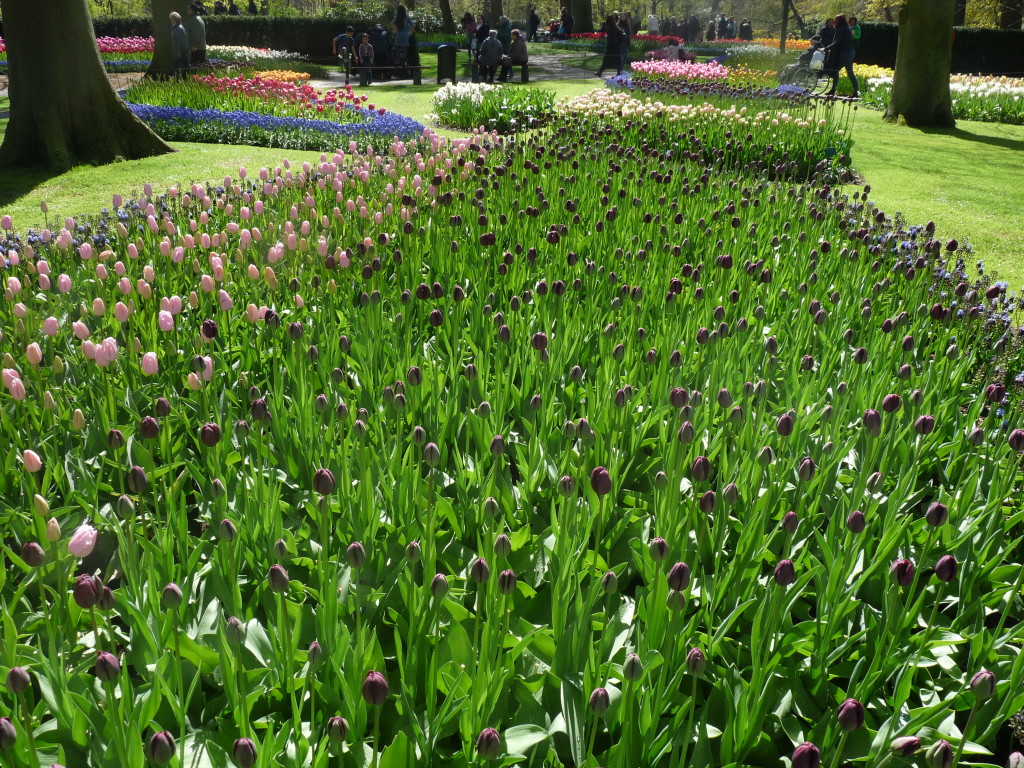 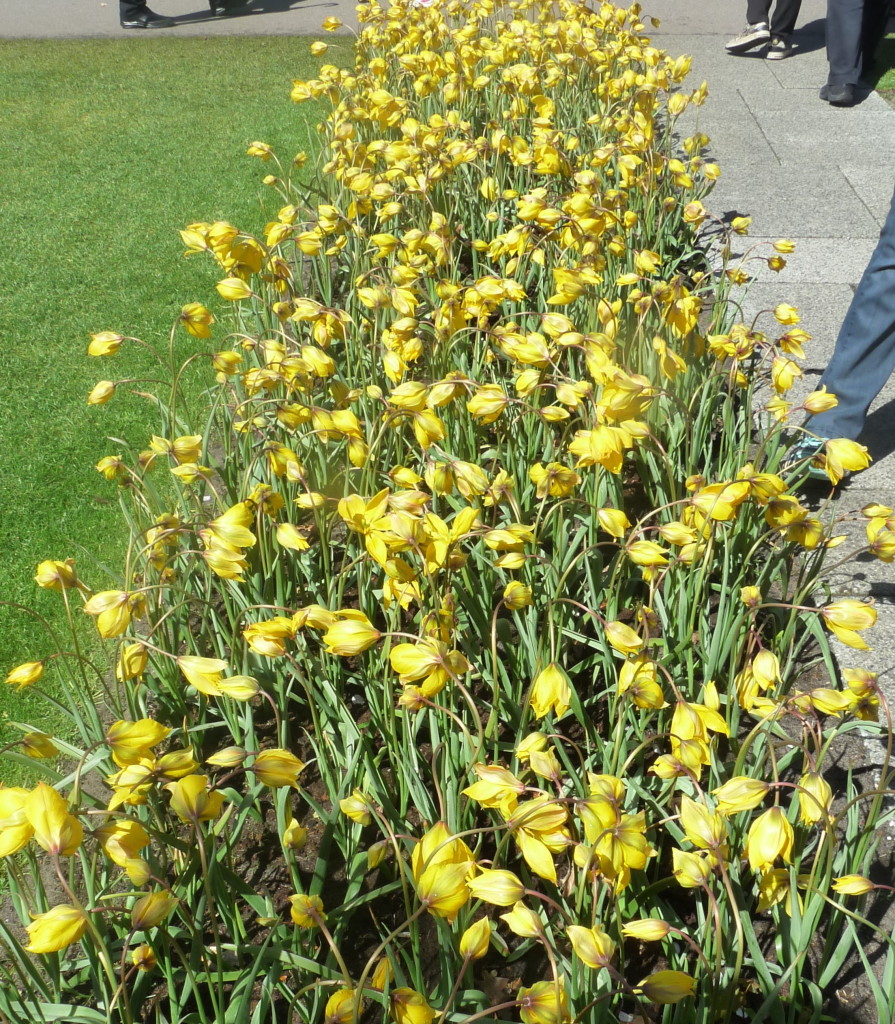 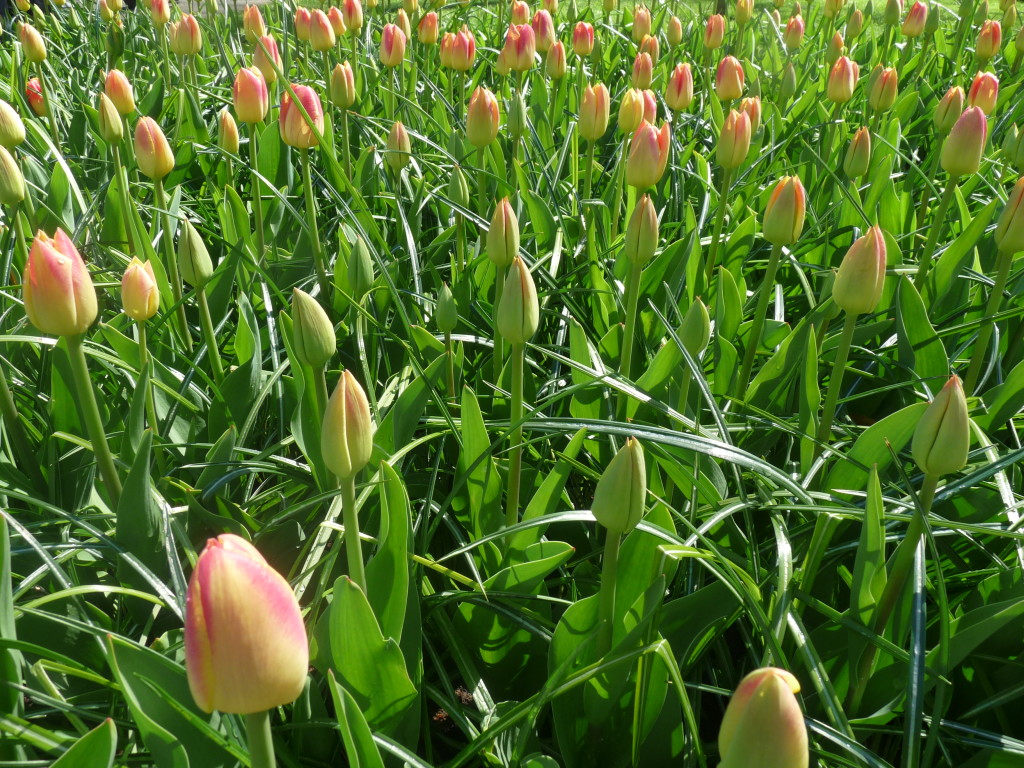 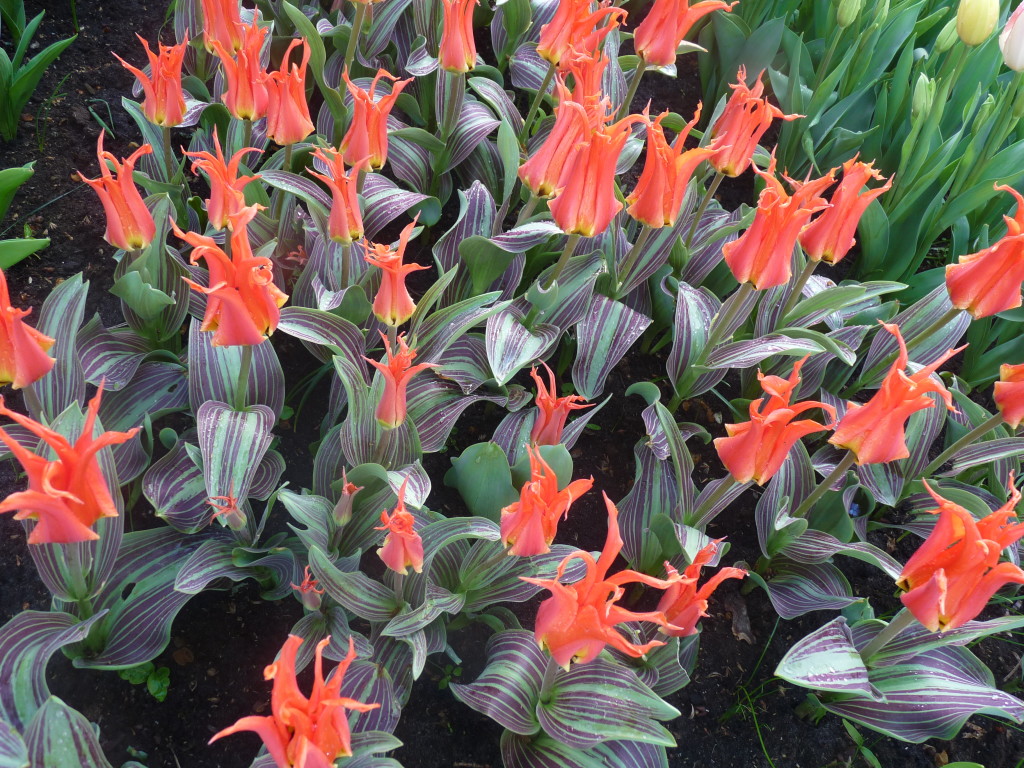 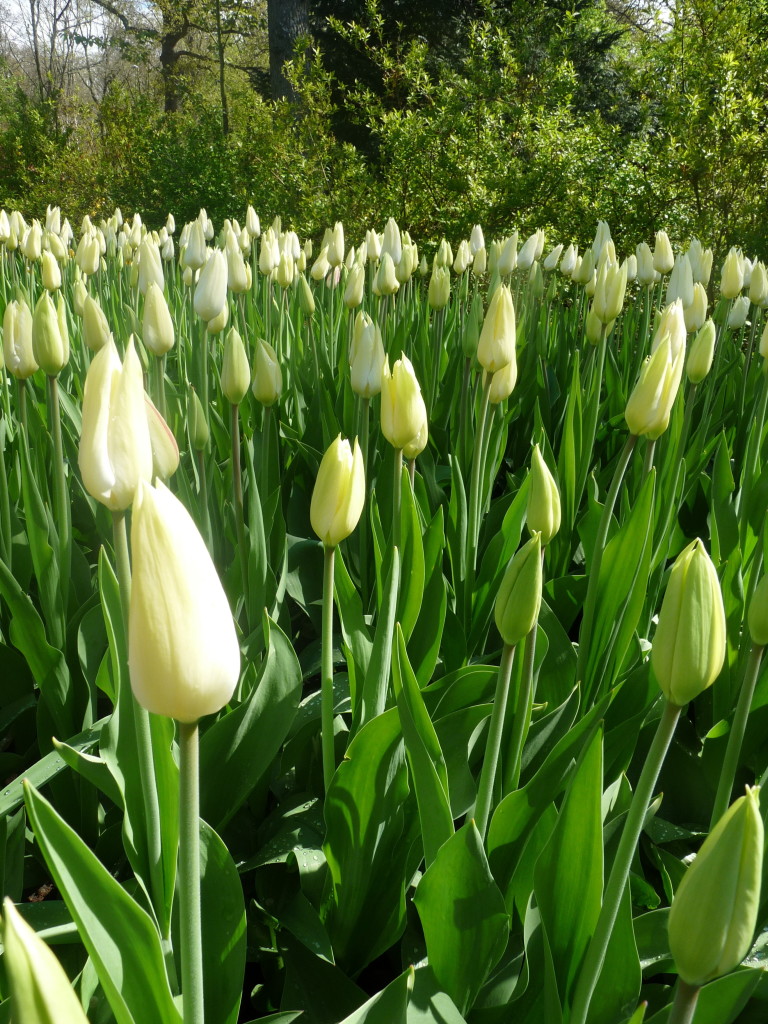 The received wisdom for tulips is that you plant a single colour together in blocks, so I was surprised to find a few beds that were a riot of contrasting colours and shapes. And actually, after all the formality in the rest of the gardens, these tutti-frutti beds were a joy. 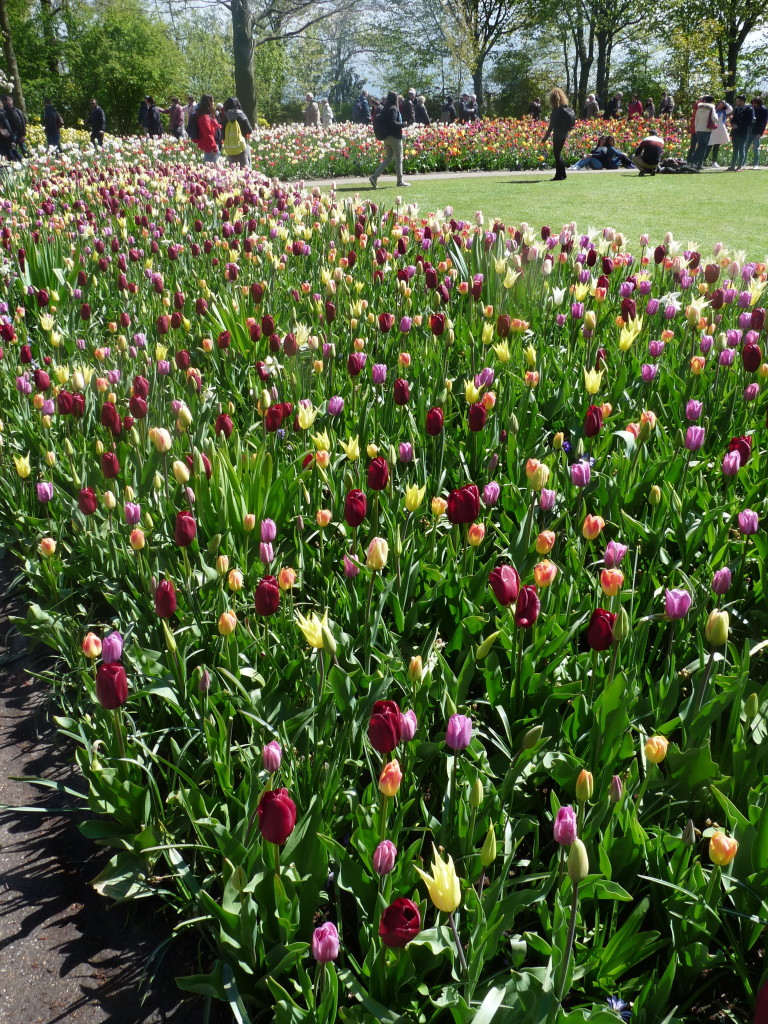 Matt rather dryly observed that there’s an element of the cruise ship about the Keukenhof and I know what he means – it’s fun, but quite an unreal, artificial creation. Plus it was full of coach parties. Take a peep outside of the fairyland creation and the Dutch landscape gives an insight into what these gardens are all about – marketing the acres-upon-acres of flowers and bulbs that keep the Dutch economy afloat. Outside, the Dutch landscape is as flat as their ubiquitous pancakes

So I was surprised at how little merchandising there was at Keukenhof…it was difficult to find the name of a variety of tulip and the bulb-shops were tiny. Perhaps maximising visitor-spending is an area of commerce that doesn’t appeal to the Dutch – equally, the cut-flower displays were all a bit ‘plonk them in a vase’, so it seems that floral design is not high on the agenda. (Compare this to, say, Chelsea Flower Show where designs are expected to be cutting-edge and they want to part you from every penny you’ve ever earned). The Dutch are horticulturalists first-and-foremost, and the Keukenhof is a shrine to their preferred artform. 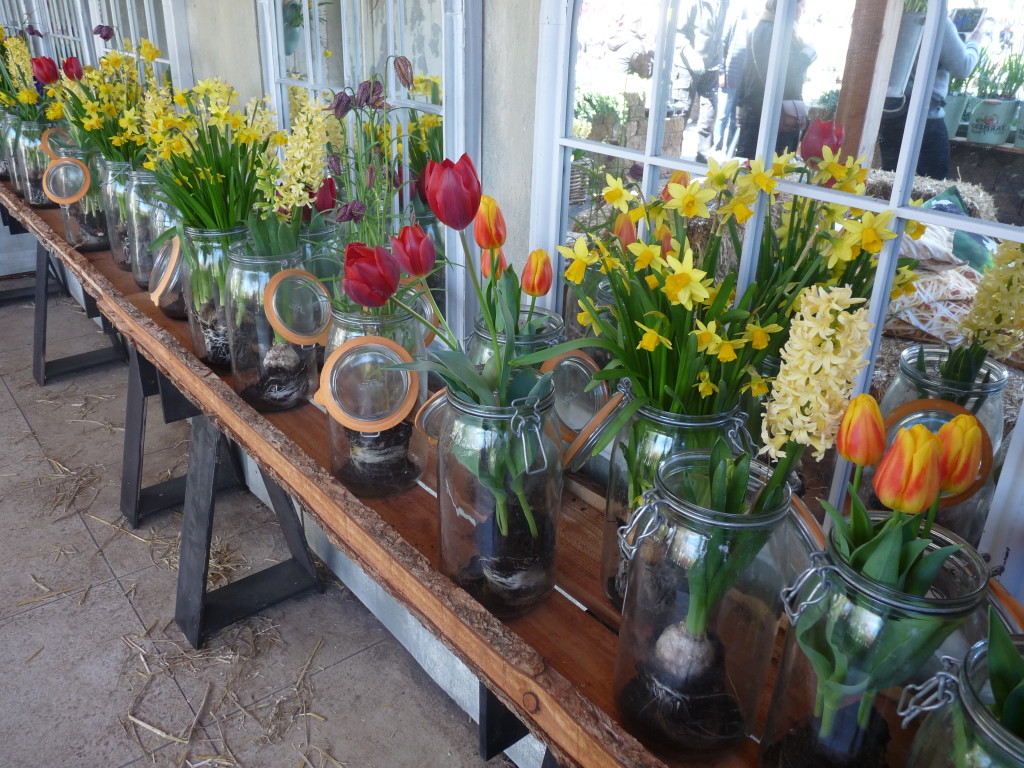 This is about as artful as the cut flower display got, alas

On a different note, this will be the trip that I’ll remember for when I felt the little monster in my tummy starting to wriggle around for the first time. It is the weirdest thing, like when you drive over a humpback bridge and your stomach takes a few minutes to catch up. I’m 20 weeks, have got an undeniable paunch and remain shocked at how out-of-breath I get from normal physical activity. Four-and-a-half months to go.

The Keukenhof is open from March to May. www.keukenhof.nl/en/