Not been getting much cooking done of late due to the new addition to the family. 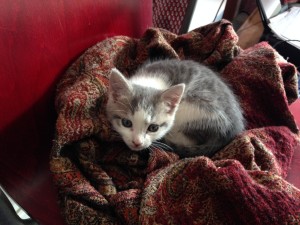 Gertie has been dragged from her rural idyll on our friend’s farm in Buckinghamshire to live on the mean(ish) streets of Edgbaston. She is a 7 week old jumpy, scratchy, inquisitive bundle of fun.

Yesterday I had to go to Malvern and whilst there, the done thing is to stock up on spring water. Non-Malvernites tend to not understand this: it literally means collecting water from the hills, from one of the 20-odd springs dotted around. I go to Evendine lane, as did this chap with his demi-johns. That’s a lot of beer he’s going to be making.

Malvern Water is the best there is. Tap water, particularly in Birmingham, tastes disgusting. This is pure and tastes of…nothing. I was asked at a wedding once if it’s true that I only drink Malvern Water. The answer is yes my friend, it is true and I don’t apologise for it.

Neither am I the only one. Collecting water is a Thing here and people have their own ways of making it easier. It’s not uncommon to see bits of drainpipe used to channel water, or massive great containers that are too heavy for one person to lift.

If you know this country, you could be dropped here blindfold and still know where you are. It’s the smell of the ferns. At this time of year, the Hills are alive with the scent of ferns. The autumn cyclamen are in bloom in Malvern – another sign of season’s change. No matter where I go in the world, this land will always be home. 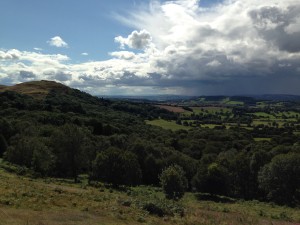