Despite the fact that this weekend was the hottest August bank holiday on record, I’m sticking my neck out to say that it’s not summer anymore. This afternoon on the allotment – although it was still warm – the sun was low enough in the sky to cast softened light and the air had the voluptuousness to it that comes as we teeter into autumn. Leaves look slightly tired; sunflowers set seed. Apples ripen. Without fail at this time of year I wonder what happened to my summer (answer, I am usually working flat out all through it) and whilst that’s true enough this year, we have tried our best to seize the season. This Sunday even saw a barbecue (Morroccan lamb shoulder with griddled courgettes, tabbouleh, tzatziki and flatbreads from the halal shop).

Produce is showing the shift in season. My allotment is at least a month behind my mother’s veg patch, so we’re only now getting going with the runner beans and the bulk of the cut flowers. My folks keep us going with baskets of green peppers, tomatoes, potatoes and sweetcorn. In the farm shops, the first apples are in and there are boxes of greengages, plums and damsons to be had. 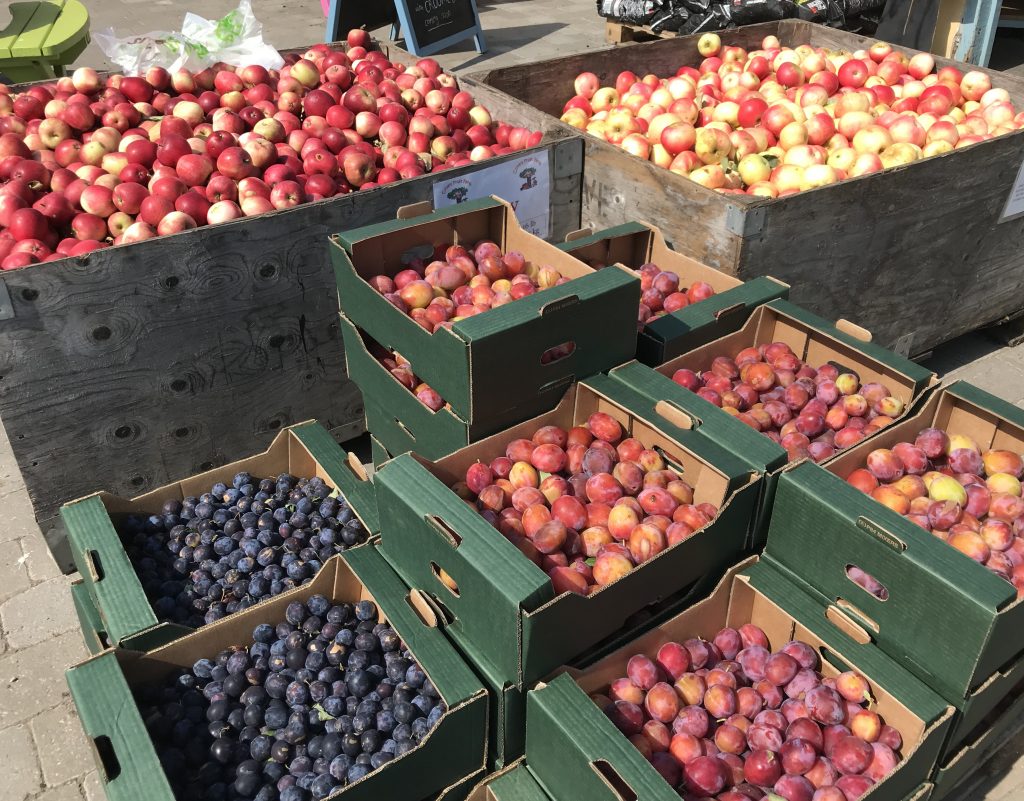 Season’s change at Clives: crates of early apples plus damsons and plums 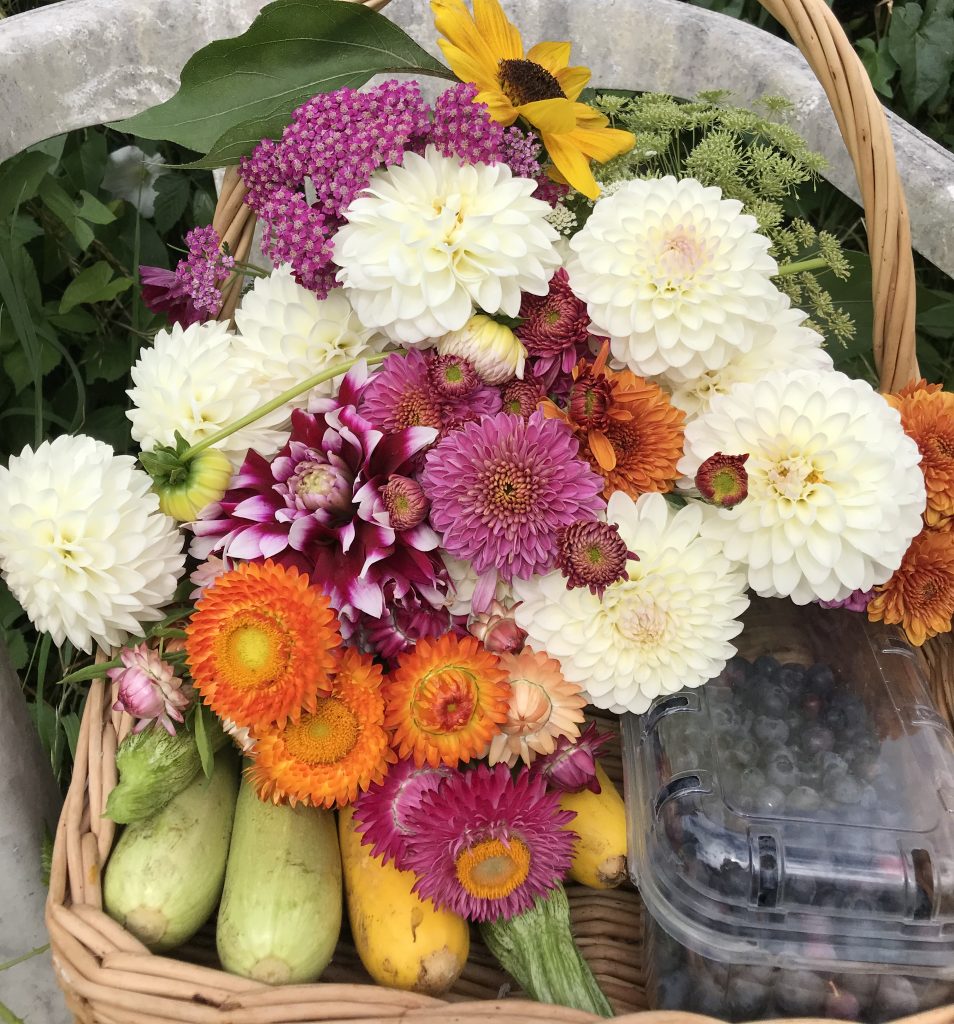 The white dahlias are phenomenal this year

I’m particularly pleased with today’s cut flower pickings – the orange chrysanthemums provide a great foil to the golden sunflower and dahlia, picked out with purple verbena bonariensis, achillea and cosmos. The little pincushion-headed flower is a self-seeded weed that I consider pretty-enough to make it to the vase. 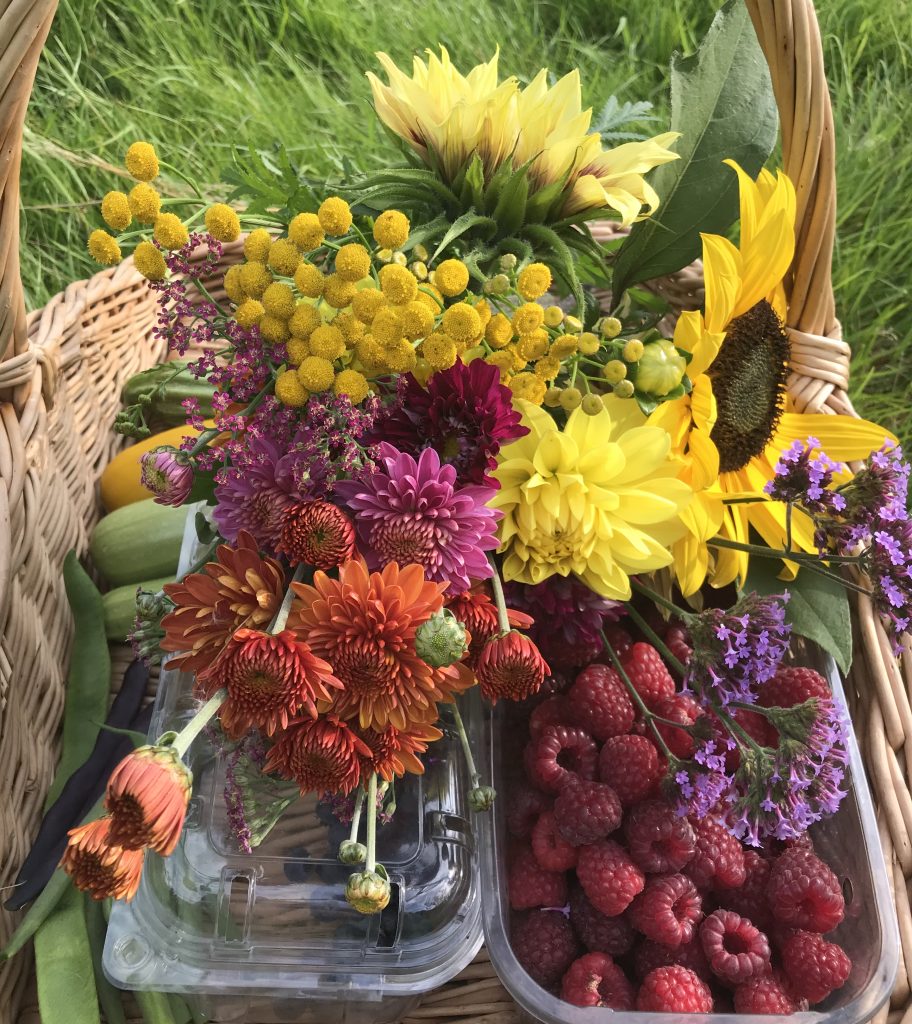 The pinks of June and July have given way to fiery yellows, purples and oranges

What has slipped a bit is the cooking. In the hot weather we eat a lot of salads (interesting ones, obvs) plus Matt’s been cooking loads more lately whilst I’ve had my head buried in a laptop. And although he’s a great cook, one thing I definitely beat him at is the time-honoured (female) skill of opening the fridge door, seeing what needs eating, then doing something with it. Like my japple pudding – the ends of a jam pot covered with sponge then topped with sliced apples that were on the wrinkly side. 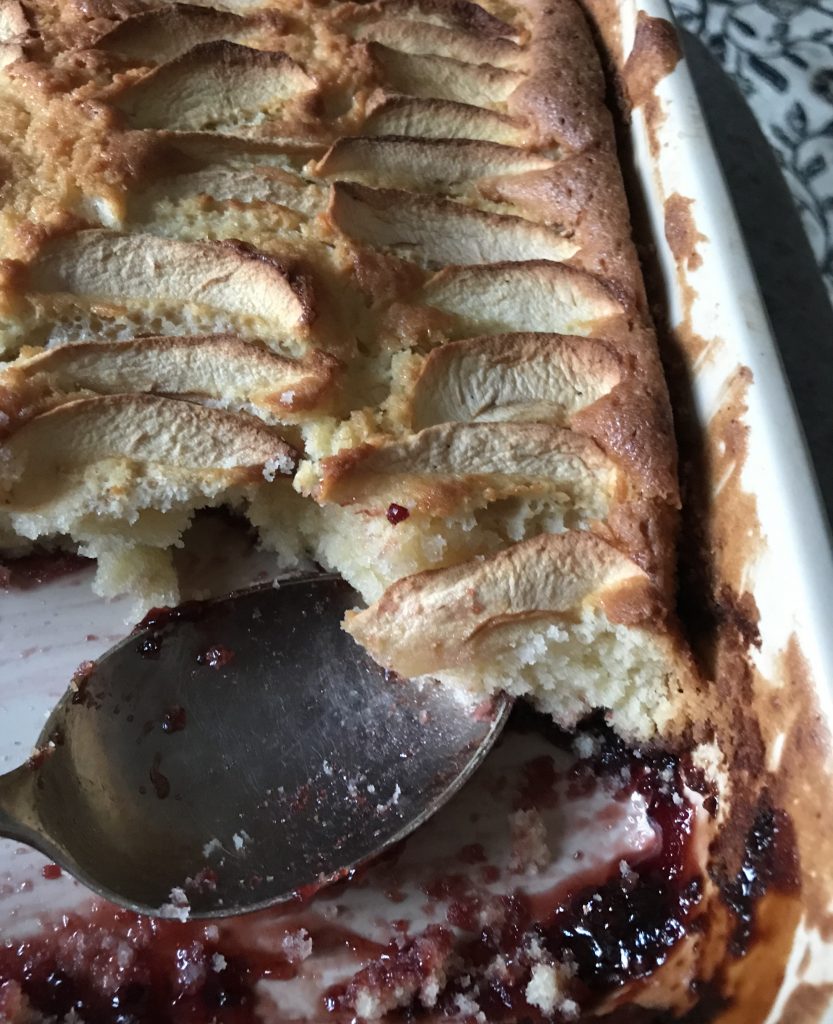 This plum torte comes from a similar need. I had a load of black plums from Aldi that were on the edge of going over, plus some nectarines, and I wanted to make a pudding. The Tuscan Plum Torte recipe in Sarah Raven’s Garden Cookbook provided a base recipe – instead of just plums I added in the nectarines, and also a bit of lemon for a citrus edge. The Italians have a fine tradition of cake that isn’t too rich but is actually more biscuity-bread like, and often eaten for breakfast. This one is easy enough, just go easy on the caramel – I took mine too dark and it made for a sponge that tasted of treacle rather than syrup.

First, simply whizz together self-raising flour, unsalted butter, caster sugar, zest of 1 lemon and a squeeze of juice in the food processor until well combined. Add in 3 eggs, one at a time, and whizz until smooth. 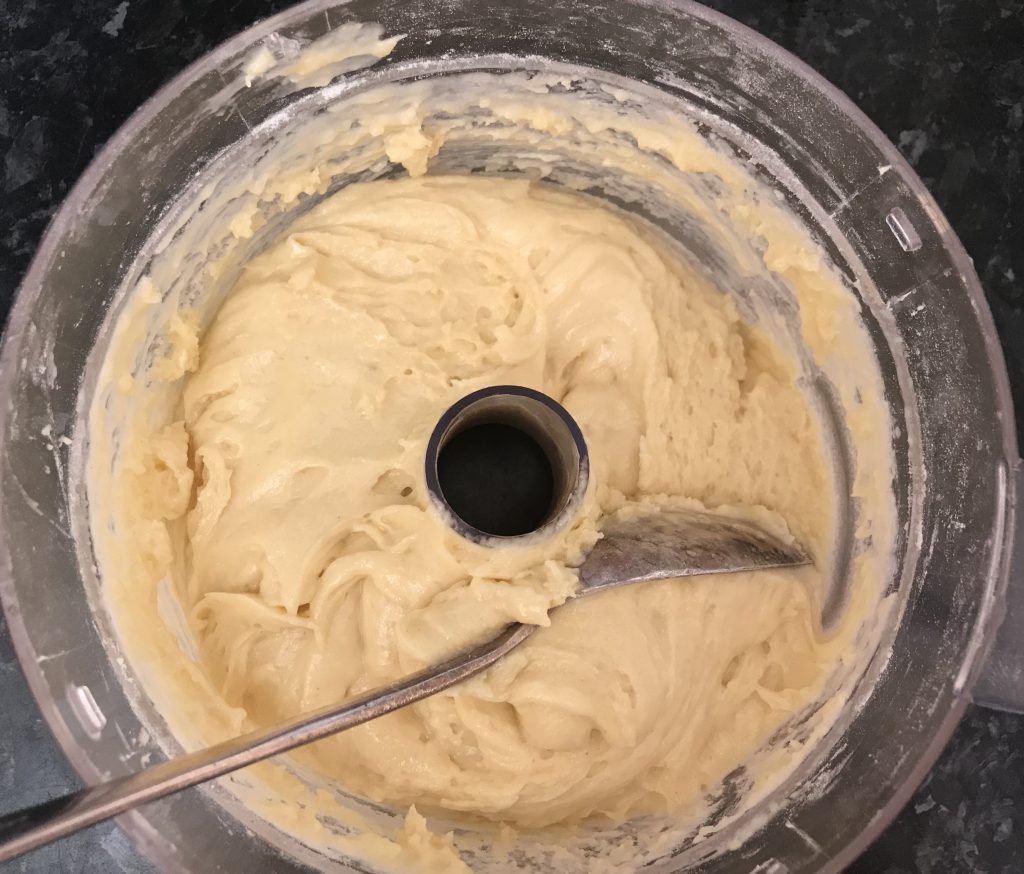 Meanwhile, in the pan that you plan to bake your torte in, melt together sugar and water until completely dissolved, then simmer until you have a pale caramel (I took this too dark for my taste). 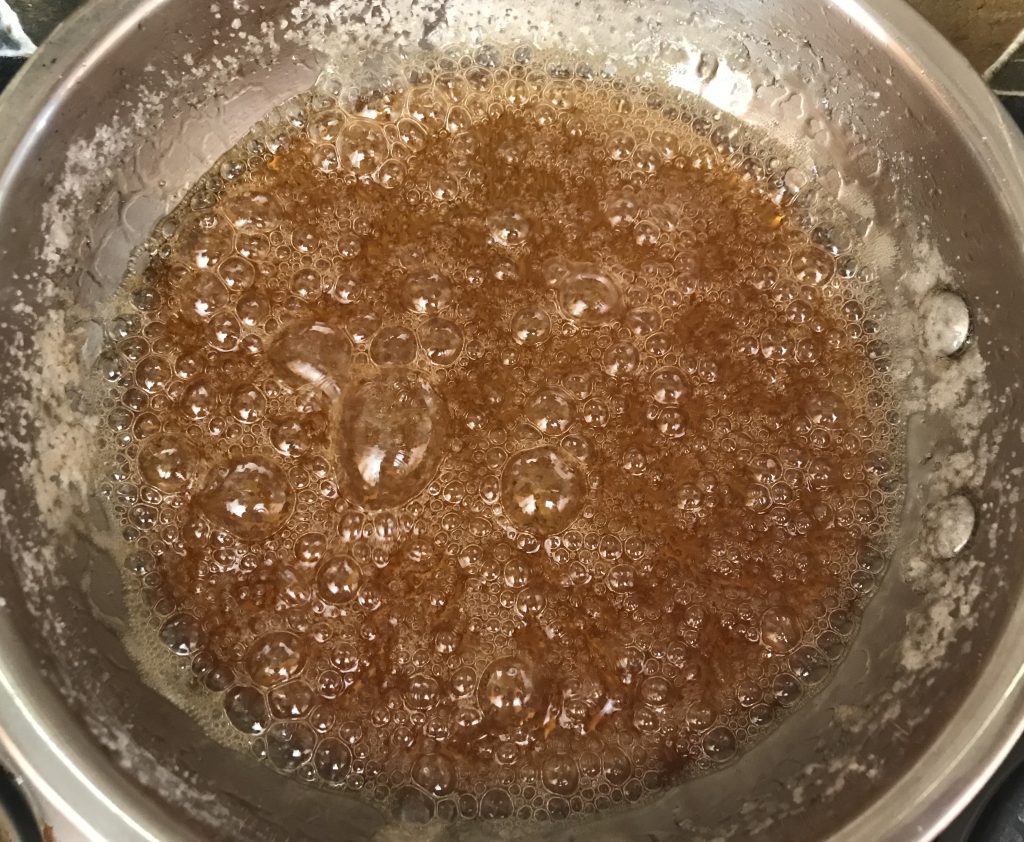 Add in sliced plums, nectarines or peaches. When you do this the caramel will bubble alarmingly and go several shades darker, be warned. Although mine looks burnt it actually isn’t, but the flavour was slightly too far on the treacly-side for my liking. 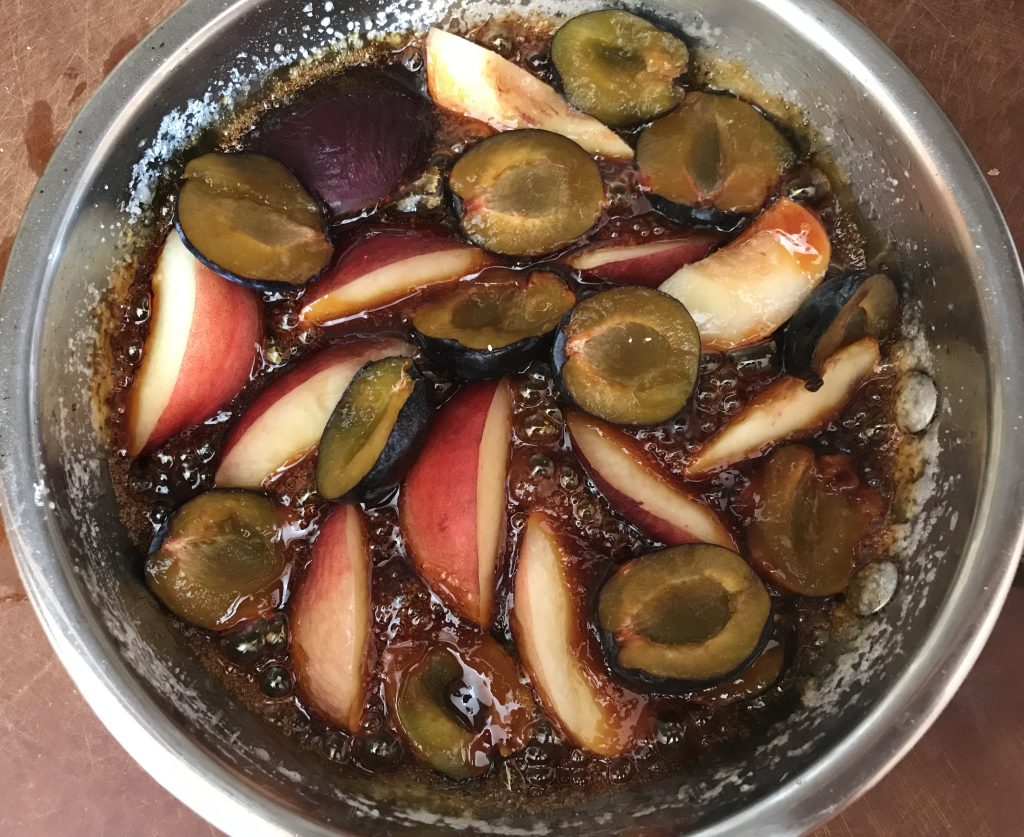 Add in plums and nectarines; be aware that your caramel will turn several shades darker when you do this

Then smooth the batter on top of the fruit, and bake for about 45 minutes until risen. Leave to stand for a few minutes before turning out and be warned – caramel is HOT HOT HOT. Nice on its own, with cream or plain ice cream. 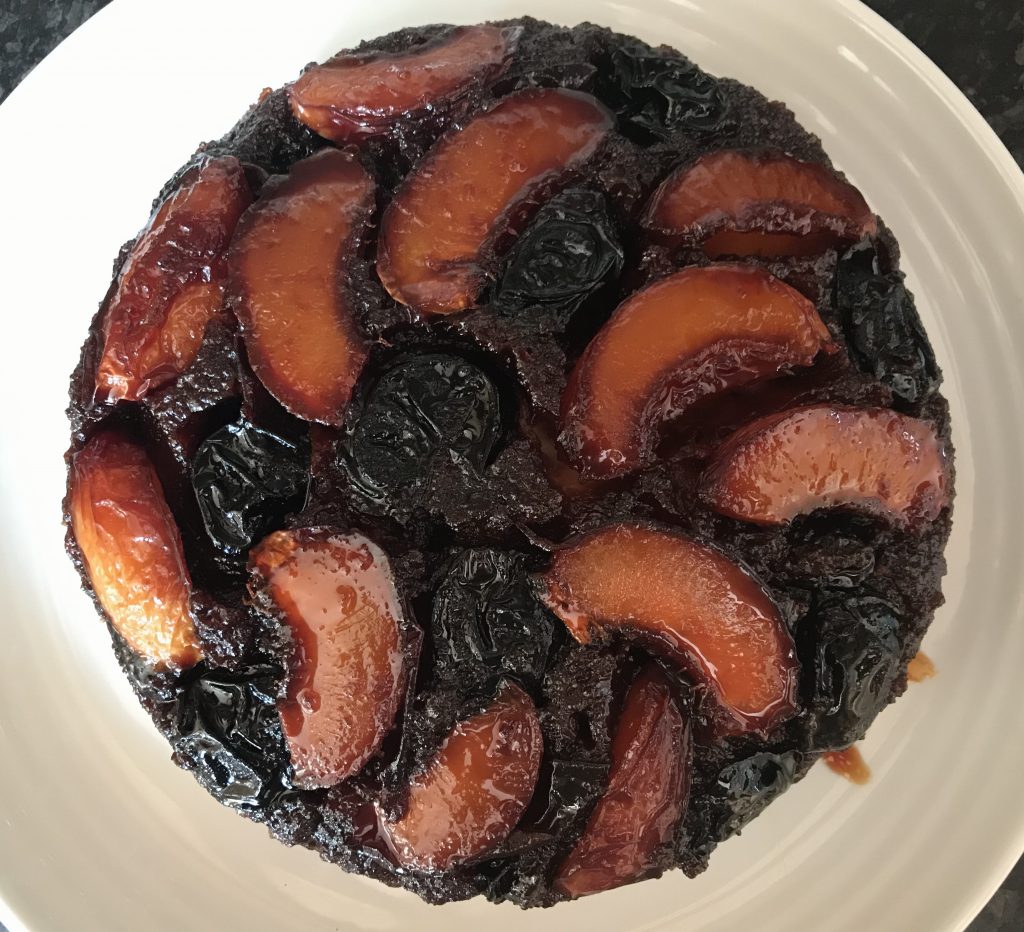 After baking, turn the torte out onto a large plate. This isn’t burnt I promise; I simply used black plums!

Pre-heat the oven to 170c and have ready a 25cm sauté pan that is oven-proof.

Whizz together the caster sugar, butter, flour, lemon zest and juice in a food processor until combined. Add in the eggs one at a time and whizz until smooth.

For the caramel, melt together the sugar and water in your sauté pan until totally dissolved. Bring to a simmer and cook until a pale caramel is achieve. Meanwhile stone and slice your fruit.

Place the sliced fruit onto the caramel – it will bubble and turn several shades darker, so be careful that you don’t burn yourself. Spread the batter on top of the caramel and smooth to the edges. Bake for about 45 minutes until risen and cooked through. Leave to stand in the pan for 5 minutes before turning out.

Cooking and eating: Japple pudding, only barbecue of the summer (lamb shoulder), a lot of home-made curry. First purchase of a half-case of wine since before pregnancy.

Out and About: Chatsworth; Cotswold Farm Park; Matt’s building the shed.