I’ve had to use up all those chillies from Mother’s greenhouse – 32, to be precise. Sweet chilli sauce it is. 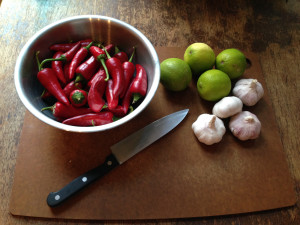 32 chillies waiting to be cooked up

I use a recipe from a great little paperback, Thai Cookery Secrets by Kris Dhillon. There’s no pictures, no styling, just clear instructions for all things Thai. I’ve altered the quantities in order to deal with the chilli glut and also added a little thickener, and so we need (original recipe in brackets):

750ml (250ml) white vinegar (I use a mixture of white wine and rice, but only because that’s what I had)

Once you’ve gone through the lengthy steps of prepping all the chilli and garlic, put them in the food processor and whizz until finely chopped. Then simply pop it into quite a large pan along with the sugar and vinegar. It will look like this: 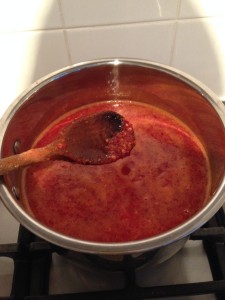 Stir on a gentle heat until the sugar is dissolved, then put up the temperature and cook until syrupy. How long this takes depends on the quantities involved, but this vat took about 40 minutes (I cooked mine until the sugar thermometer read 110 celsius). Whatever you do, do not make the mistake of breathing in the chilli-vinegar fumes that will come off your saucepan, as you may never recover. I never, ever learn this lesson. You might want to open some windows and get the extractor fan on.

When it’s nearly ready, add a little of the slaked cornflour and cook it through until you have the consistency that you’re after – I tested by popping a little onto a saucer and leaving to cool a little. You want something that is still liquid but with some viscosity, like runny honey. When it’s done, take the pan off the heat.

I bottled this lot, leaving it to cool for half an hour and then pouring into sterilised jars. The sauce keeps pretty well but it’s best to leave it for a week or so before eating, to allow the vinegar to mellow. 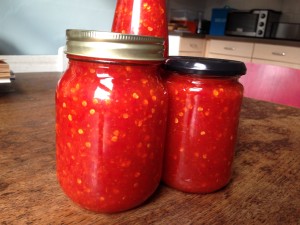