Sun shining, a day out to the nearest edge of the Cotswolds for a first posh lunch out as a trio since 2019, then an ice cream in the shadow of Broadway Tower. Cow parsley, buttercups, long long grass, hawthorn blossom and stinging nettles.

Back home, the foxgloves are in flower, majestic spikes of pink, peach and white, marked with spots of purple and orange. Foxgloves are absolutely in my top 5 flowers – so architectural and plain weird – and even better, these all self-sowed so cost not a penny. Here I’ve placed them with alliums and sweet william for an interesting mix of height and form.

I made a big batch of chocolate gelato at the weekend, overcome by the hot weather. It was good – very good – but even better are these chocolate almond macaroons that use up the left-over egg whites. They’re now my go-to recipe whenever we have egg whites hanging around, say after a carbonara or custard, and – unlike meringues, which never get eaten – they’re a firm favourite for both pre-schoolers and early-middle-agers. I found the recipe from a blog about living in a vicarage, so this is recipe is also known as Church Biscuit No.70.

Preheat the oven to 180c and line a baking sheet with parchment. Sift the almonds, cocoa and icing sugar into a bowl and using a wooden spoon, mix in the unbeaten egg whites to a firm dough. Simple.

With wet hands, roll out walnut-size balls of mixture and place on the baking sheet, flattening each one slightly as you go. Bake for 11-15 minutes, until dry on top and slightly cracked. You want to keep a certain squishiness in the middle. Cool before serving.

These last several days in the tin and are good on their own or as an accompaniment to ice-cream.

Also this week:
Harvesting: sweet william, foxgloves, last of the spring rocket, last of the chervil.
Allotment and garden: Watering twice a week (it’s not enough, no rain for two weeks now) but the veg are still small despite the warm weather. Admiring the roses, now at their peak. Delphiniums just coming out whilst the aquilegia go over.
Eating and cooking: Lunch at The Fish of asparagus with brown shrimp followed by Fowey mussels. Rhubarb ice cream at Broadway Tower. Cost a fortune but a joy to be out at last. Made chocolate gelato from the Rick Stein Venice to Istanbul book. Eating more Greek salads than most Greeks at present.
Also: Reading Under a Mackerel Sky, Rick Stein’s memoir.

You know how you get Instagram food and then you have real life food? Instagram is usually style over substance but the home-made stuff, whilst not being pretty, is actually where we can find real heart-warming soul-bolstering cooking. It’s the same with cookbooks – the things we covet on paper somehow don’t carry the true essence of what is real. The expensive images can’t give the impression of the kitchen filled with the fug of bubbling chicken stock, or the furtive treat of stealing the first biscuit off the tray before anyone’s noticed. They can’t give the life-preserving feeling that you get from a slice of proper toast slathered in salty butter. Nor do they give room for the truth that some of the best cooking actually happens when we mess it up a bit.

On that note, I’ve been tinkering about my cinnamon bun recipe (yes, it is an obsession), thinking it would be fun to try something else that’s Scandi and calorie-laden, and my eye was drawn by these, Gifflar med kanel, or cinnamon crescents, from The Nordic Baking Book. Have you ever seen a thing of such dough-based beauty? Look at the swirl! Look at the shine! Look how NEAT they are!

So obviously I had a go and, inevitably, my version look utterly crap. Big and puffy, with all the filling oozed out, like I’ve made some cheesy sausage roll from my Mum’s 1970s M&S Picnic Cookbook. But do not be deceived, for this swirly ugly mass is a thing of caramelised unctuous gorgeous heaven.

Instead of the cinnamon filling that is traditional, I used an almond version called remonce, the type used in Danish pastries and Mandelbullar (almond buns). The almond actually comes from marzipan, creamed with heart-stopping quantities of butter and sugar, so imagine this: Sweet dough baked golden in a puddle of marzipanny-buttery caramel. Then think of the illicit pleasure of peeling the leaked caramelised butter-almond off the paper in shards, shovelling them in your mouth before your 2 year old sees and wants them for himself.

Roll your dough out more thinly that you’d expect, and you might succeed in making crescents that are slightly better looking than mine. These freeze well so any that don’t get eaten can be stashed for future breakfasts, brunches or midnight feasts.

In a jug in the microwave, melt the butter into the milk then leave to cool slightly. In a large bowl, place the salt, the flour, the yeast and cardamon (in that order so that the yeast and salt don’t come into contact with each other) and mix thoroughly with a scraper. Whisk the egg into the milk mixture, then tip the lot into the flour and mix to combine. Once you have a sticky mass, tip onto the work surface and knead for a good 10 minutes until you have a soft, elastic dough. Or you can use a stand mixer if you have one. Don’t stint on the kneading, this dough needs it! Shape the dough into a ball, put back in the bowl and cover with a tea towel. Leave to prove for about 2 hours or so, until really risen and puffy. Meanwhile, make your filling:

Place the butter and sugar in a bowl, then grate the marzipan over using a box grater. Cream together thoroughly and set aside.

For the crescents:
Preheat the oven to 220c. Prepare three or four (depending on their size) baking sheets or roasting trays with baking parchment. Tip the dough out onto the work surface with the tenderness that you would treat a newborn baby. Gently shape it into a circle then divide into 4 pieces.

To make crescents, roll each piece into a circle using a rolling pin. They should be quite thin, about 1cm deep or thinner. Spread a quarter of the filling over the circle using an off-set spatula, then cut into 8 equal triangles. Roll each triangle up from the thick edge to the thin, then place on a baking sheet. Repeat and repeat until all the dough is used up. Leave to prove for another 30 minutes or so, until puffy.

If you want, at this stage you can egg wash the crescents, or simply leave them plain as I do. Bake for about 10 minutes until risen and golden. You may need to turn the trays around mid-way through baking to avoid burnt bits. Leave to cool before tucking in but take every opportunity to munch on the crunchy almondy caramelised bits that have leaked from your buns.

Variation: Almond & chocolate buns
To make a sinfully good chocolate version, break up some shards of 70% dark chocolate and scatter on top of the dough after you have spread it with the remonce filling. Either shape as crescents or make into traditional cinnamon or cardamon bun shapes, as I have done here. Bake as before. 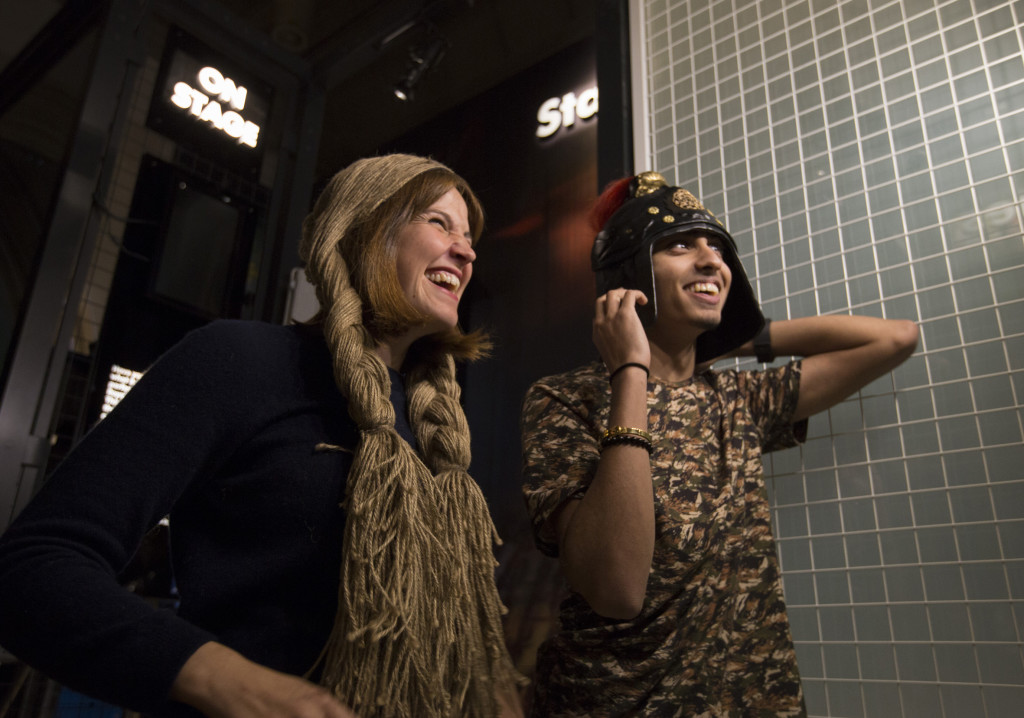 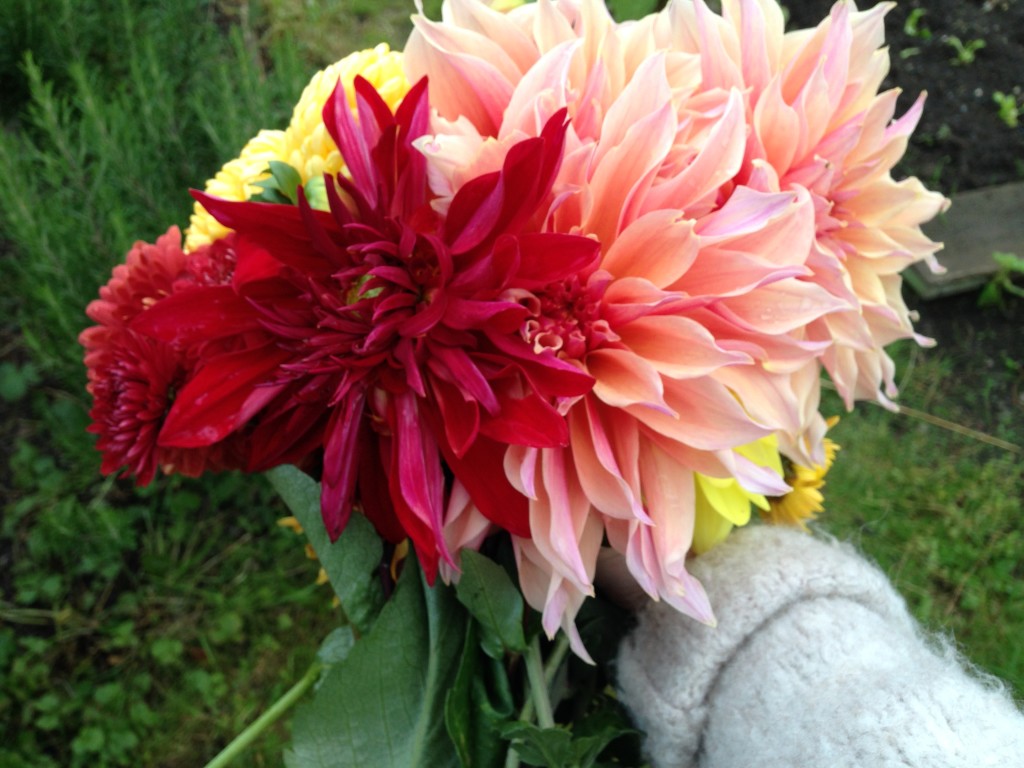 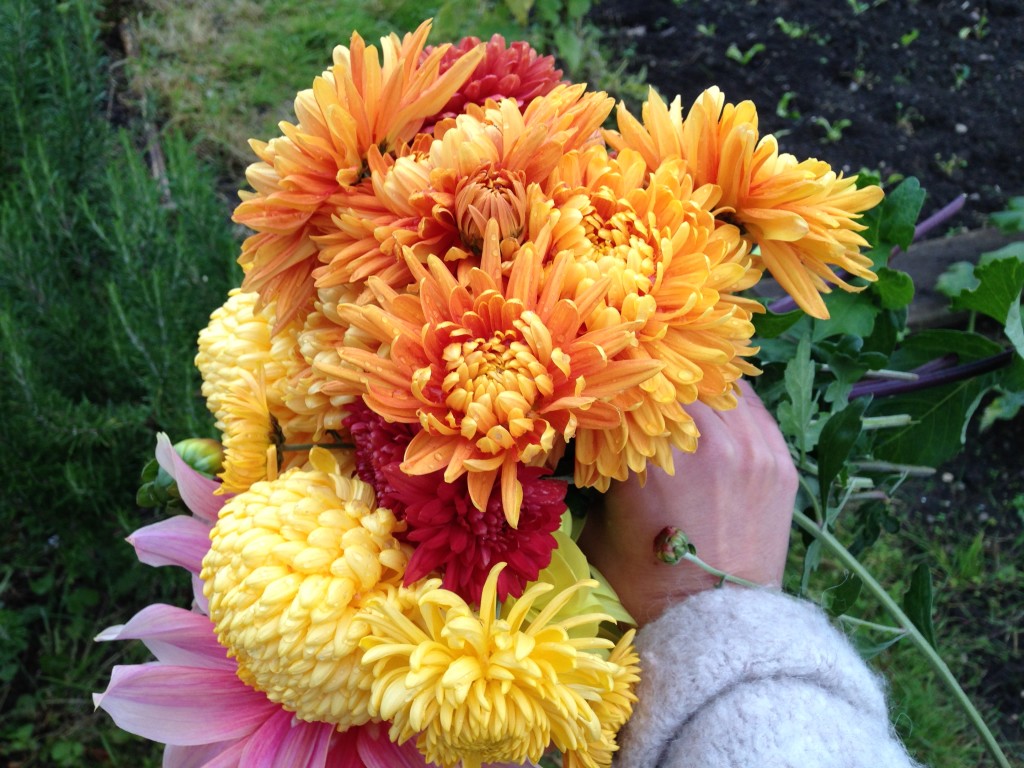 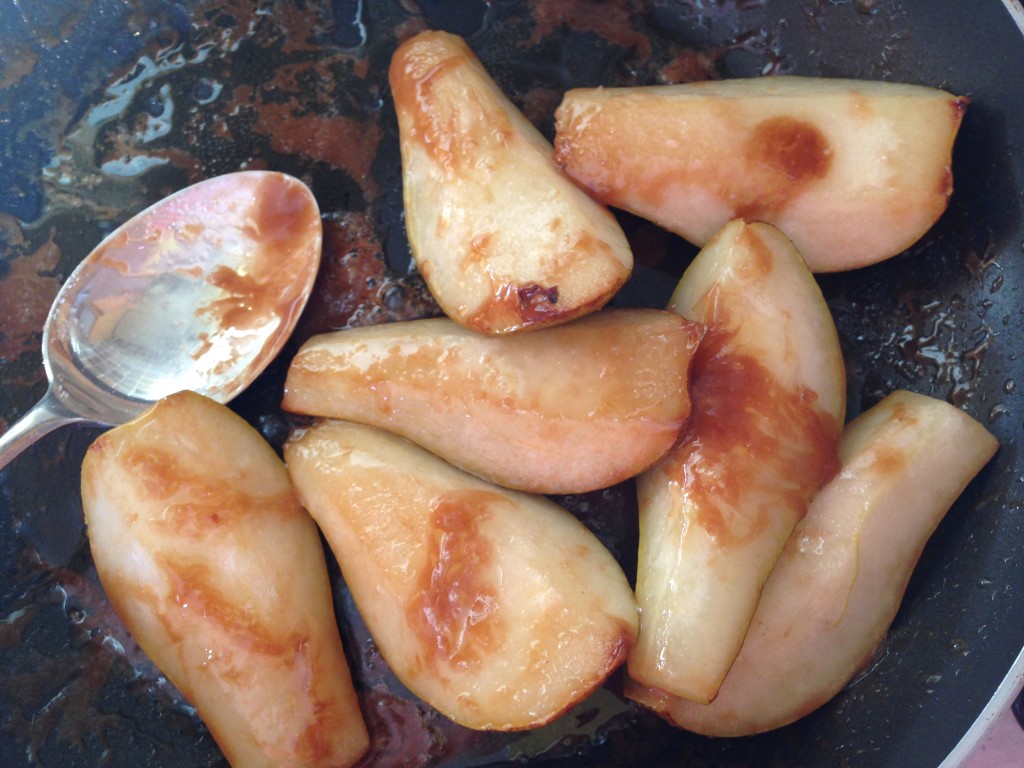 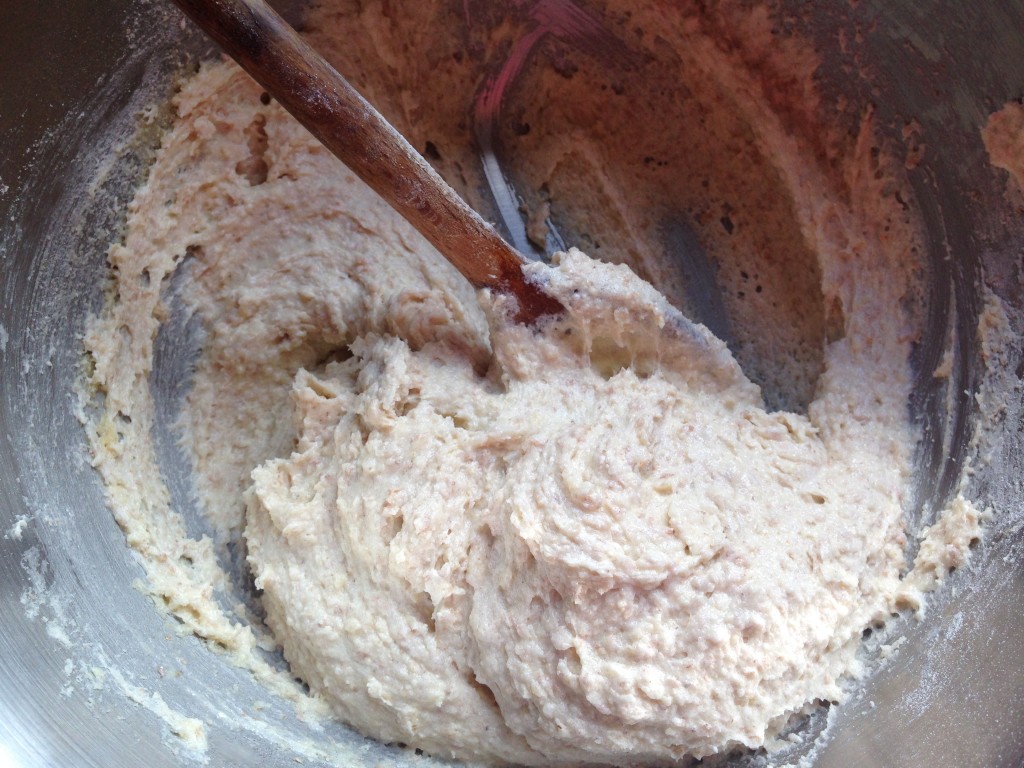 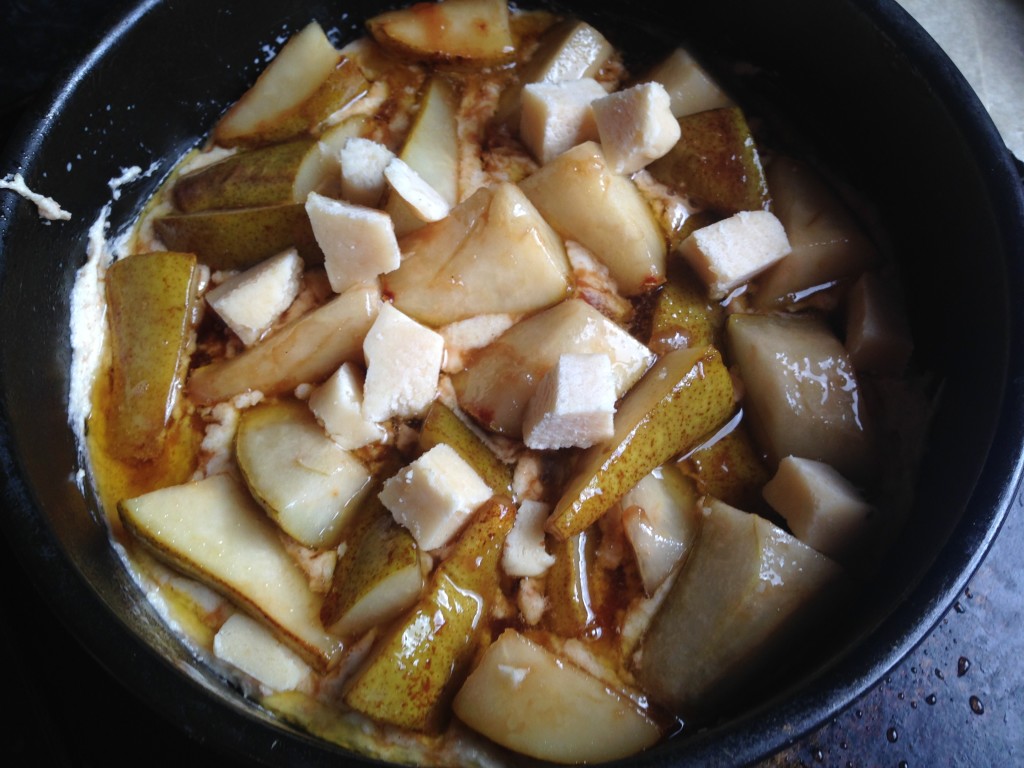 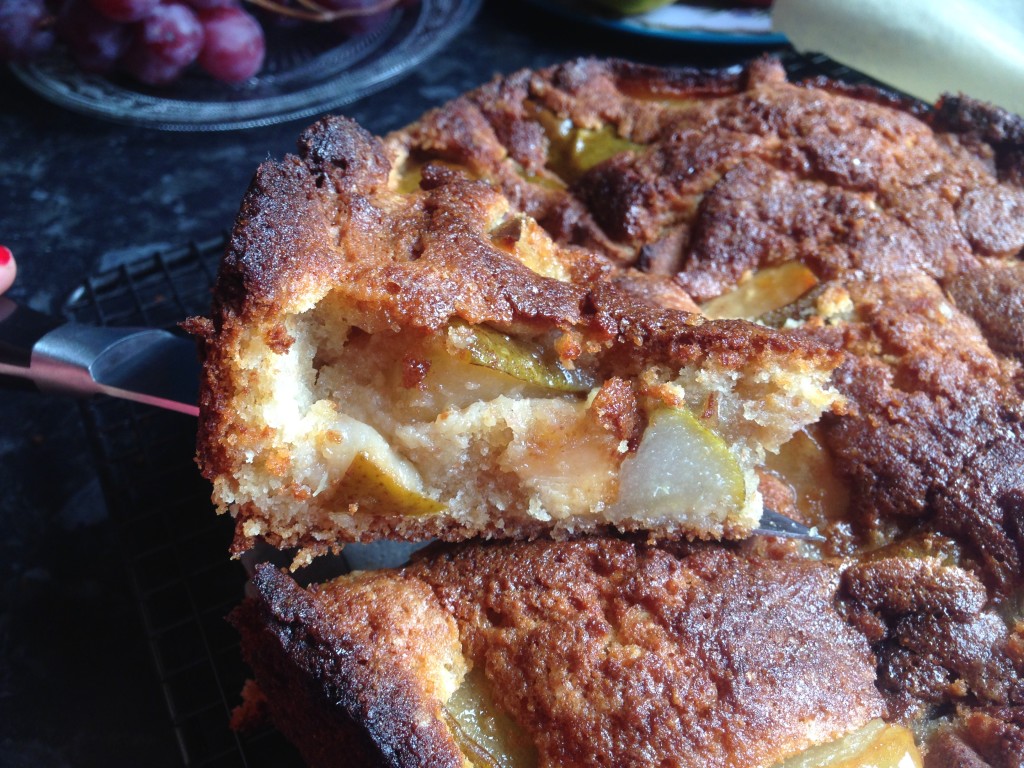