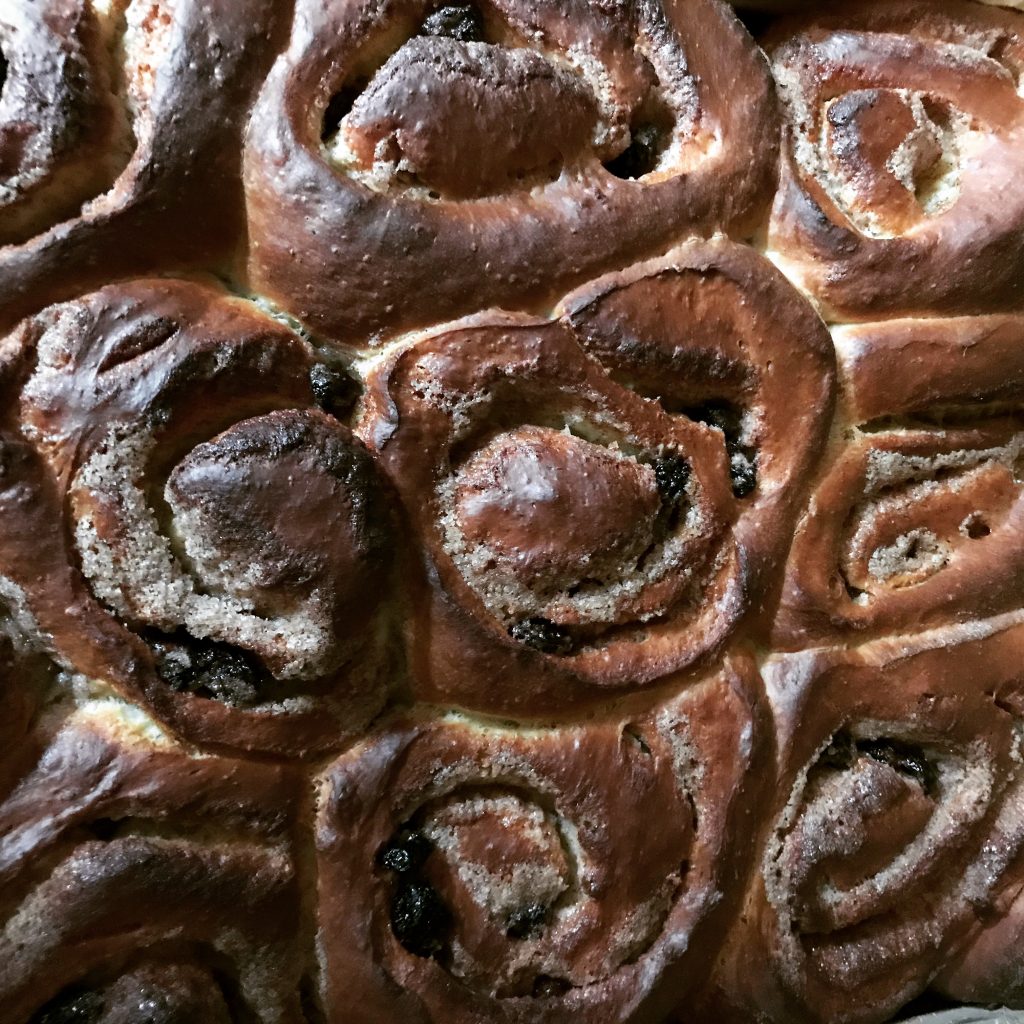 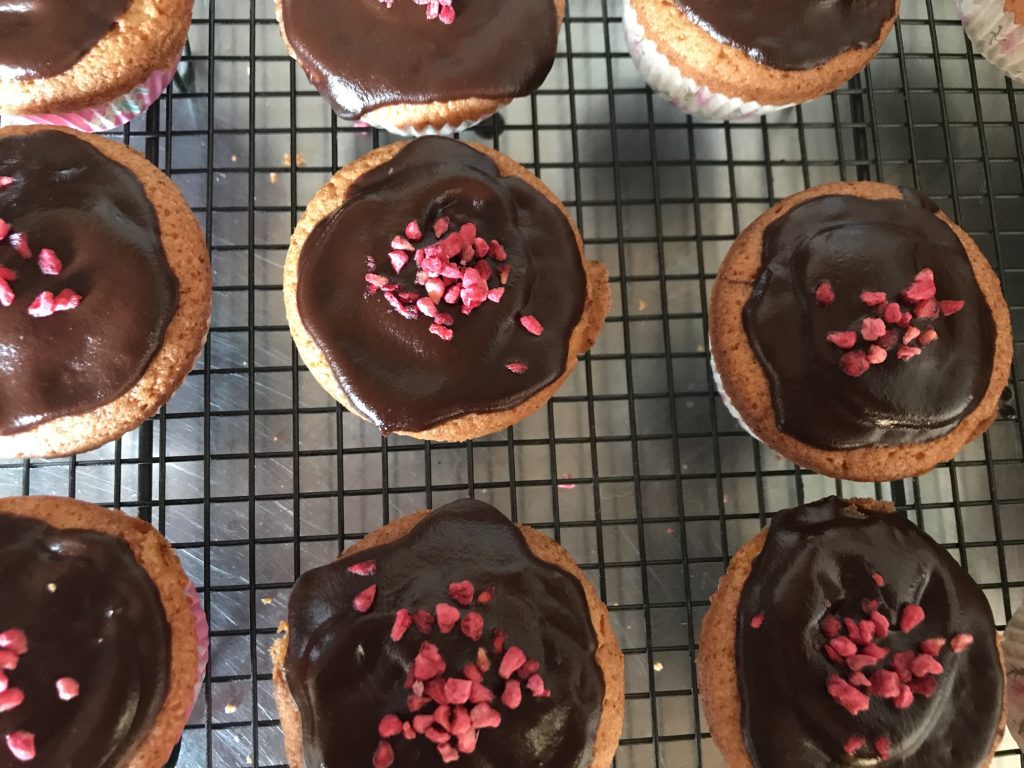 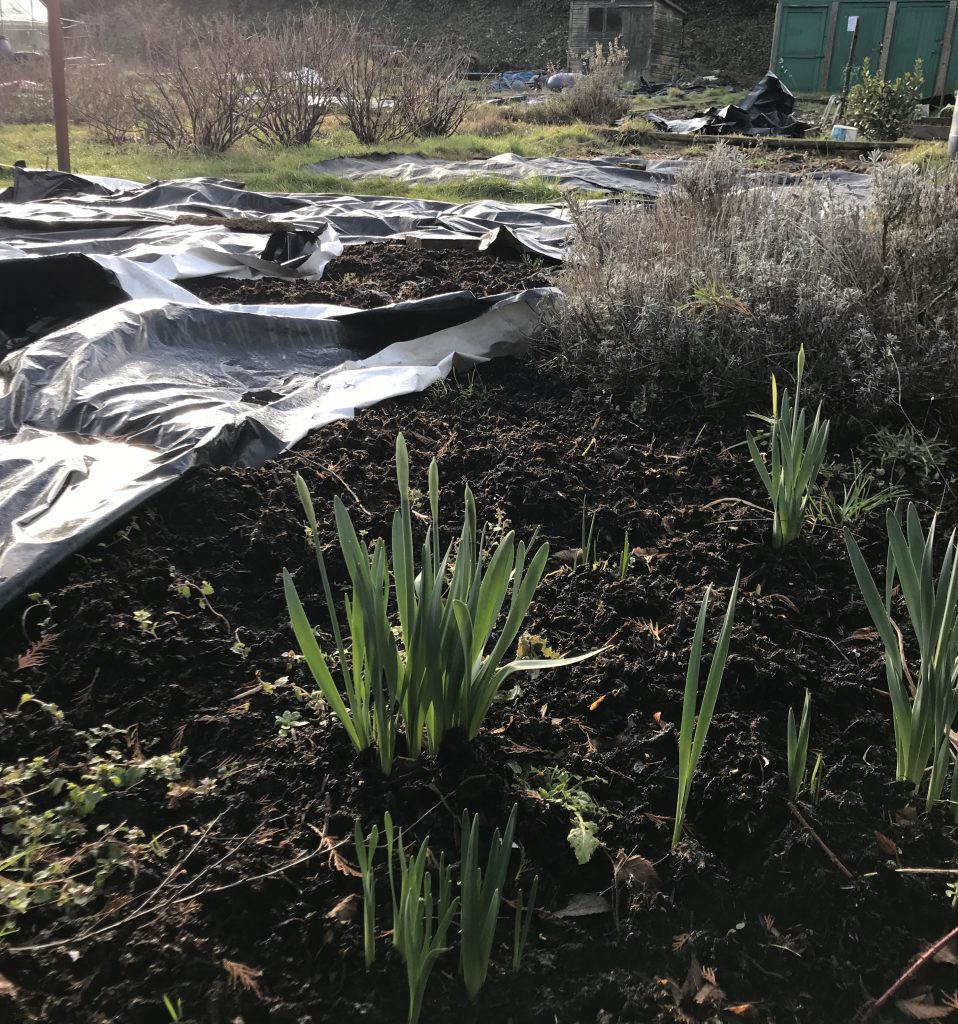 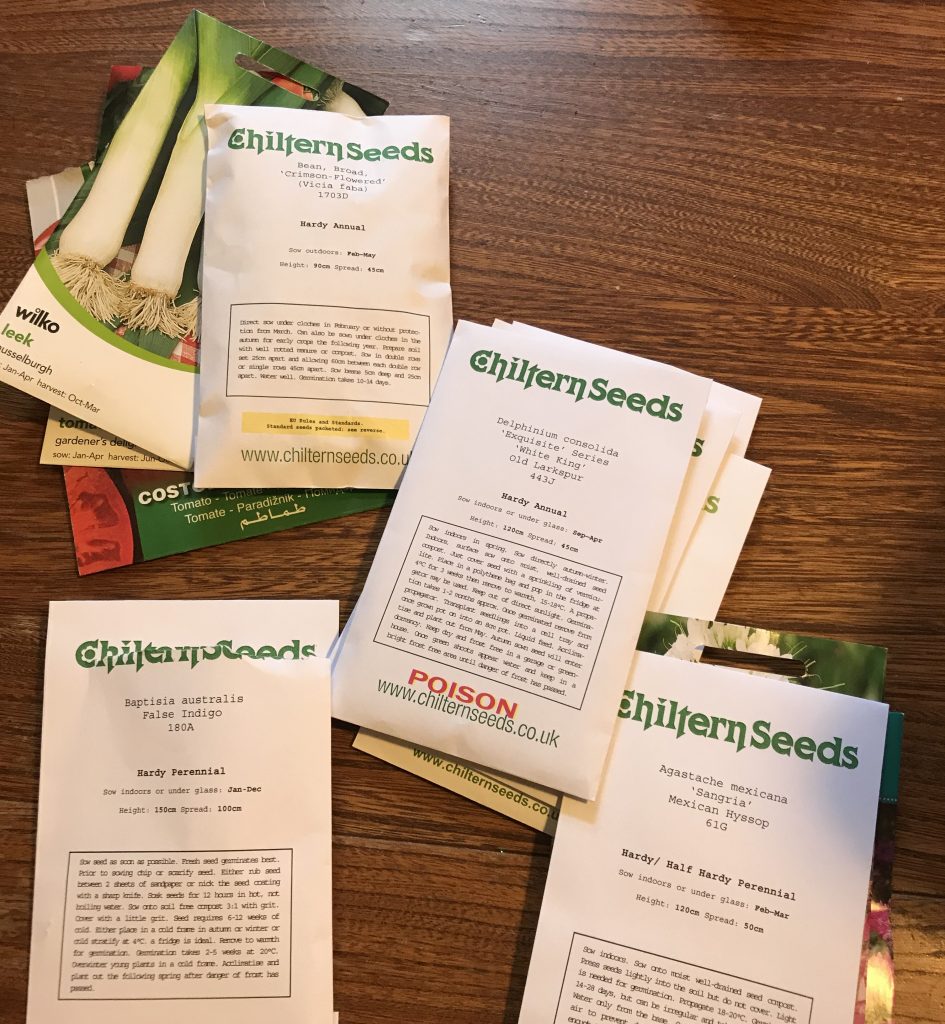 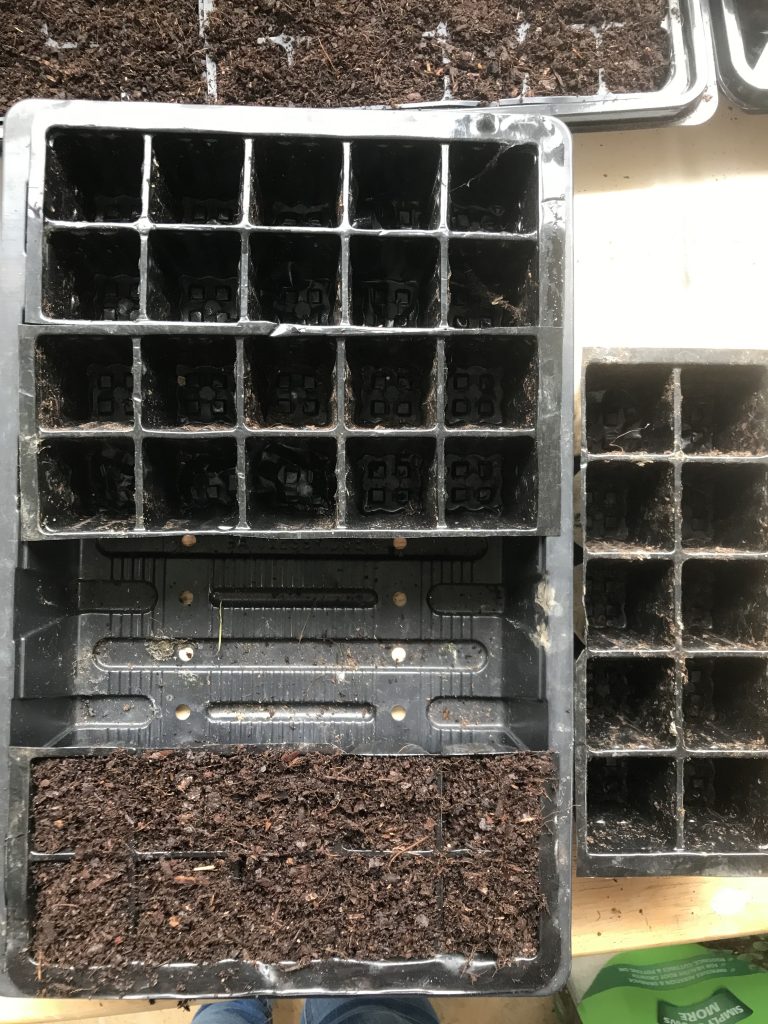 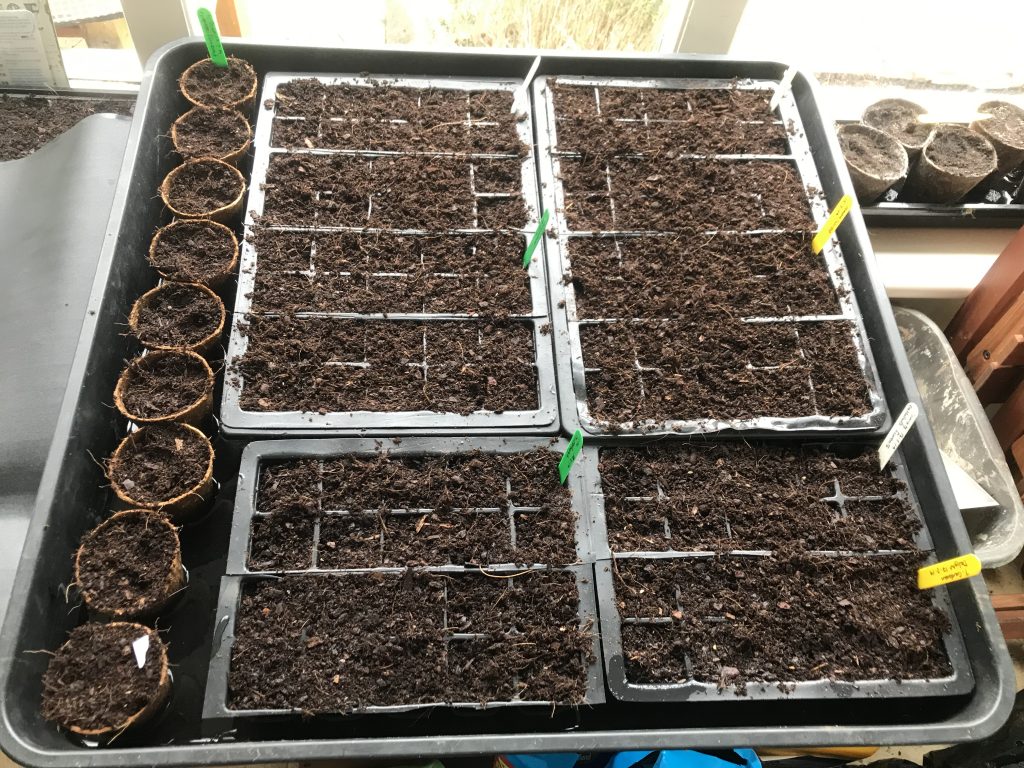 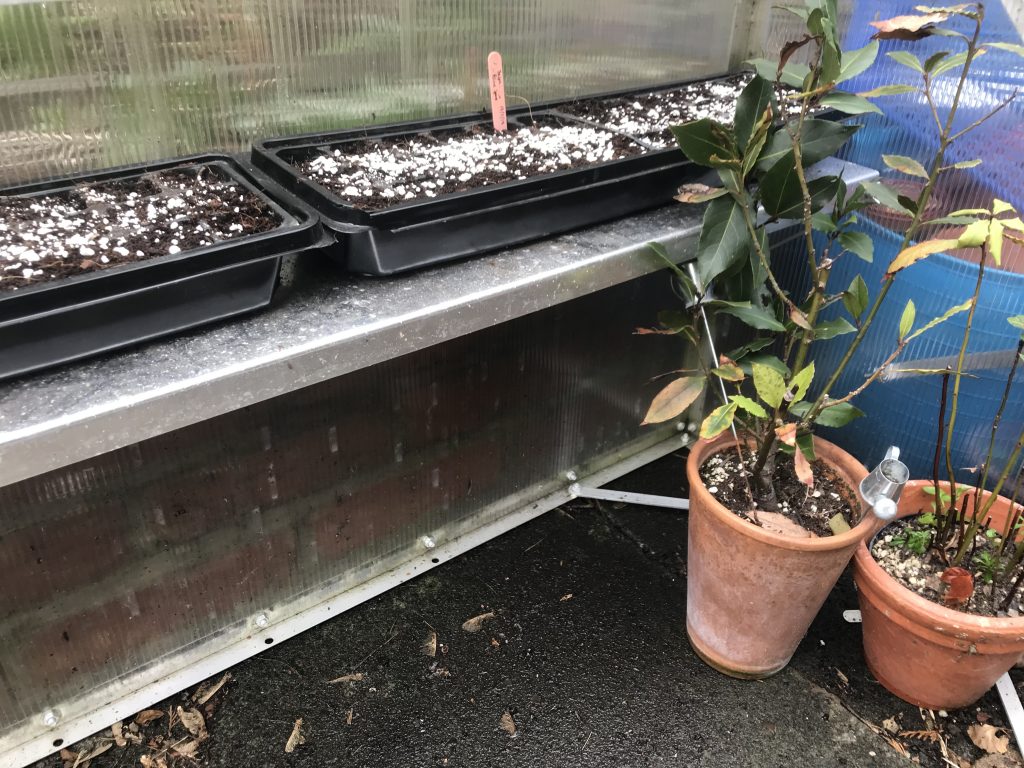 September began with parties and ended with a wedding! After a summer of growing, my cut flowers were OK (nothing special) but thankfully, I had a squad of growers watching my back. Step forward my Mum and Cousin Sue, who between them grew an entire FARM of blooms for our wedding displays. When I asked Sue to help out, back in April, I thought we’d have some pretty flowers that would be just fine, but what we ended up with was better than some professional florestry I’ve seen. I love that our wedding gave an opportunity for creative friends and family to shine. 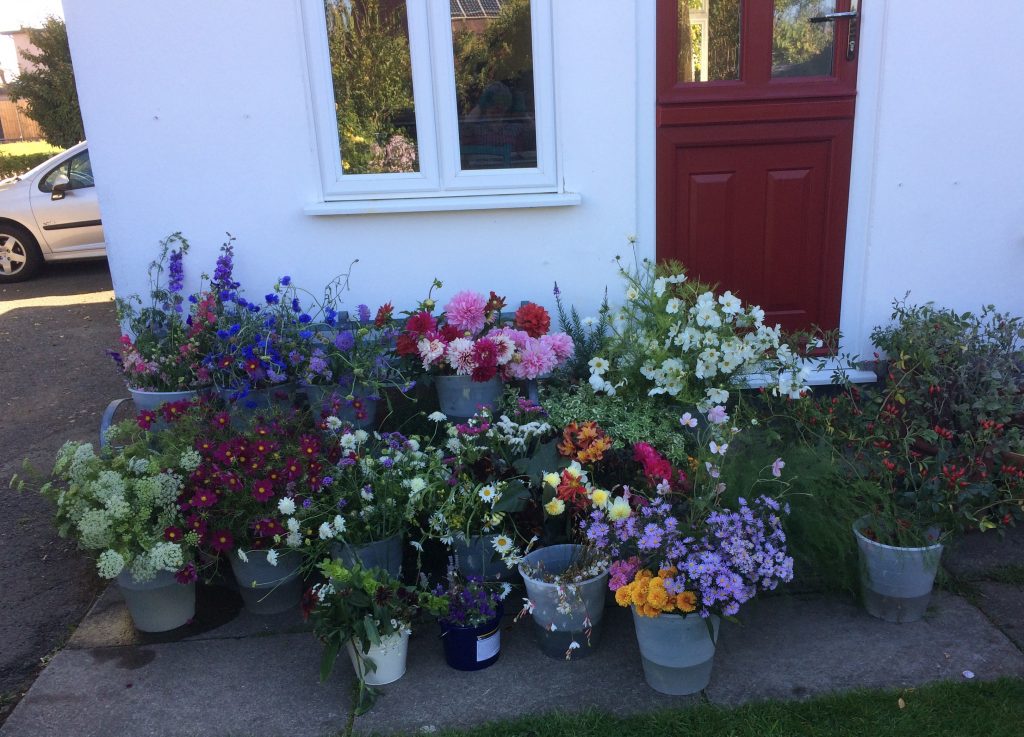 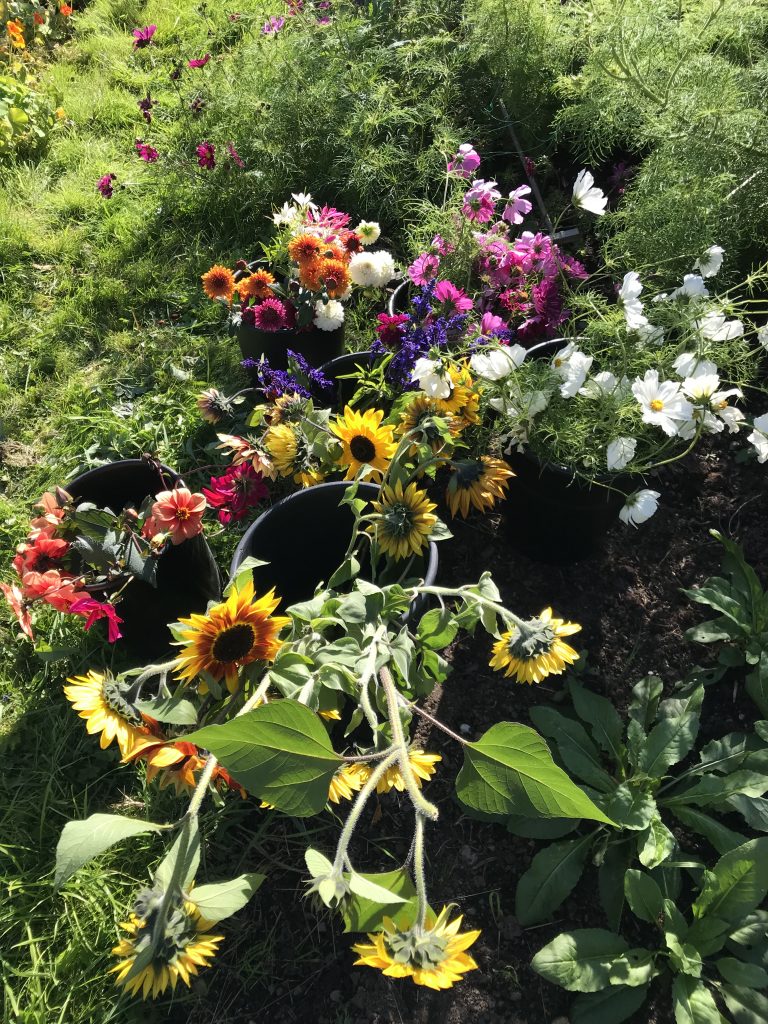 My offerings – not as impressive but still some colour and variety

Together with my Mum, Sue made up some incredible displays for tables and plinths, all using home-grown stems. Plus she made beautiful bouquets for myself and my two nieces, and some seriously impressive buttonhole work. Note the use of hops and clematis seed heads for a bit of country chic. 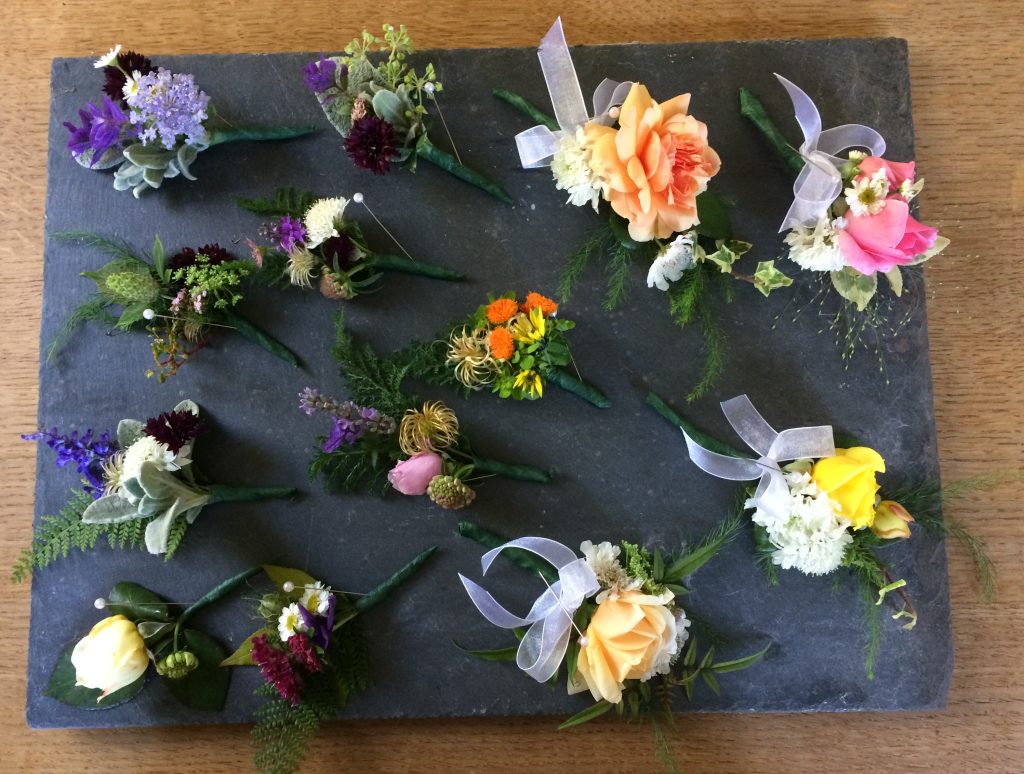 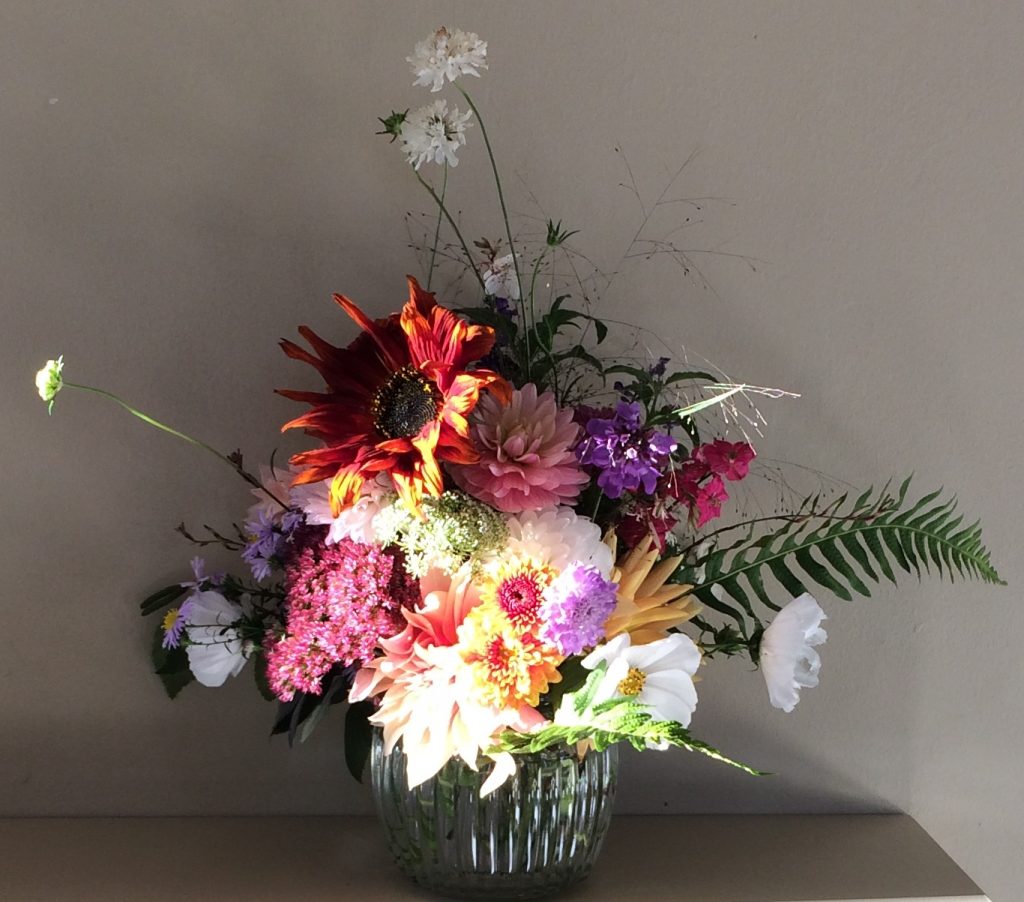 These exquisite displays were put together by Sue and my Mum 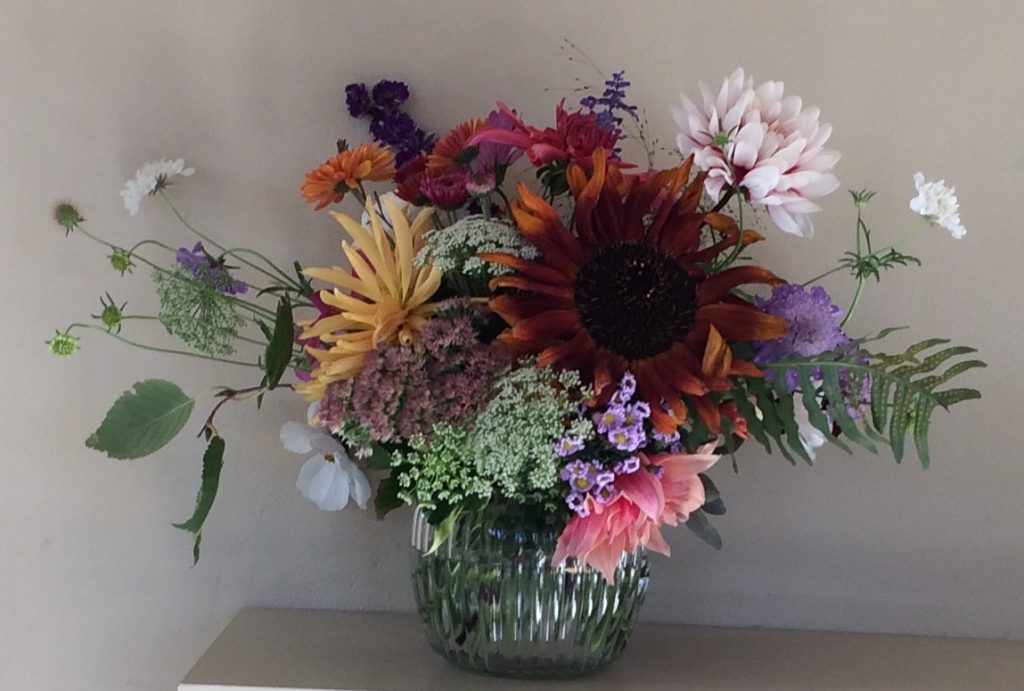 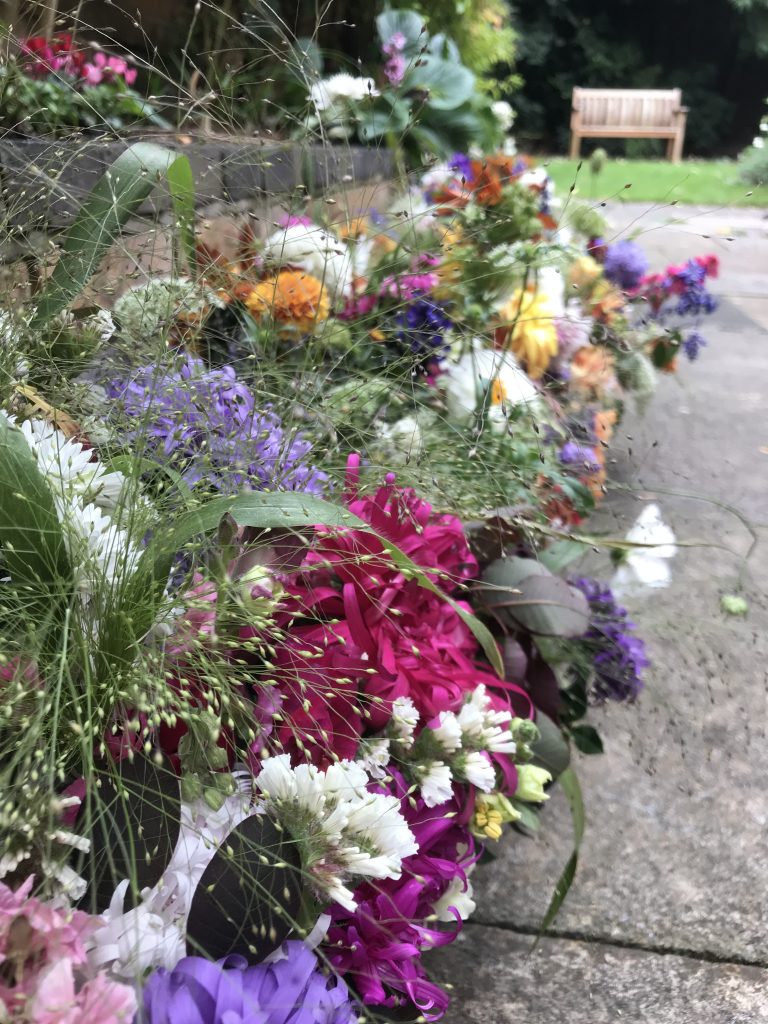 If someone is thinking of doing their own wedding flowers I would say do it…but only if you have a talented team to do all the work. If I was arranging flowers at the same time as making sure the bar was in order and the caterers were OK and having my hair and make-up done, I would have collapsed in a heap. So all respect to Sue and my Mum for their extraordinary skills – I don’t use those words lightly; I couldn’t have asked for more on the floral front.

As someone who has never wanted a big wedding, let alone a bit formal wedding (ugh), it was important to me that we included as much of our normal life into the day as possible. Normal life in Bearwood means regular trips to Chandigarh sweet centre for samosa – THE best samosa in the region – and it gave us great joy to pile 300 onto MDF boards for after-ceremony snacks. 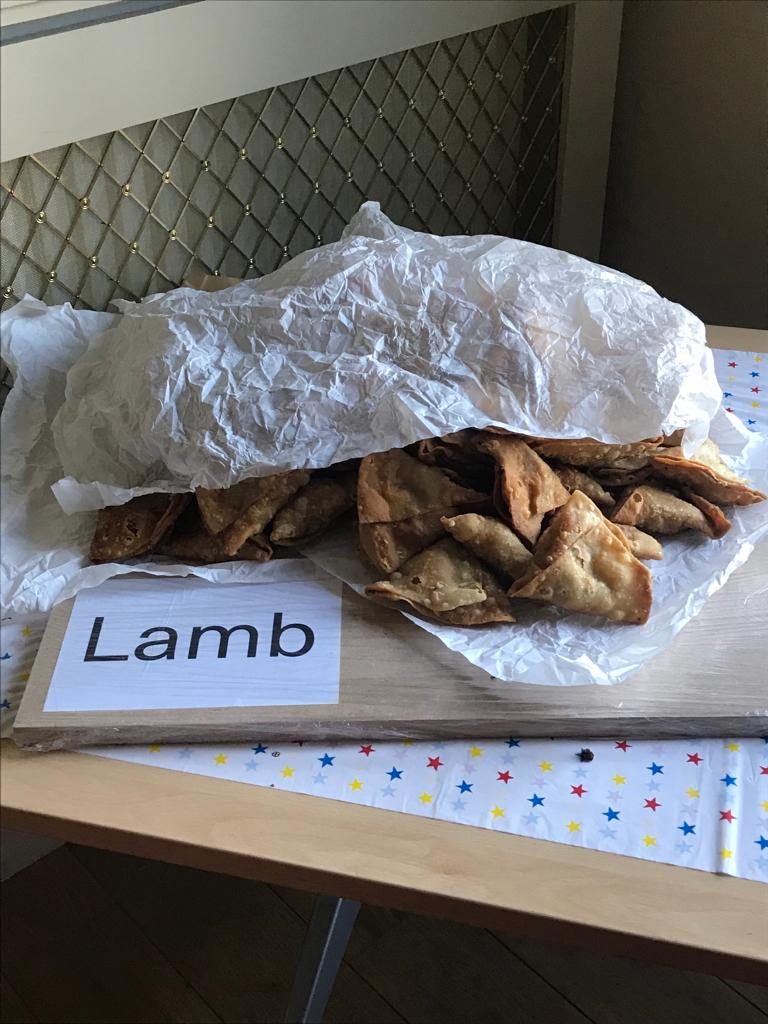 The best samosa this side of the Punjab 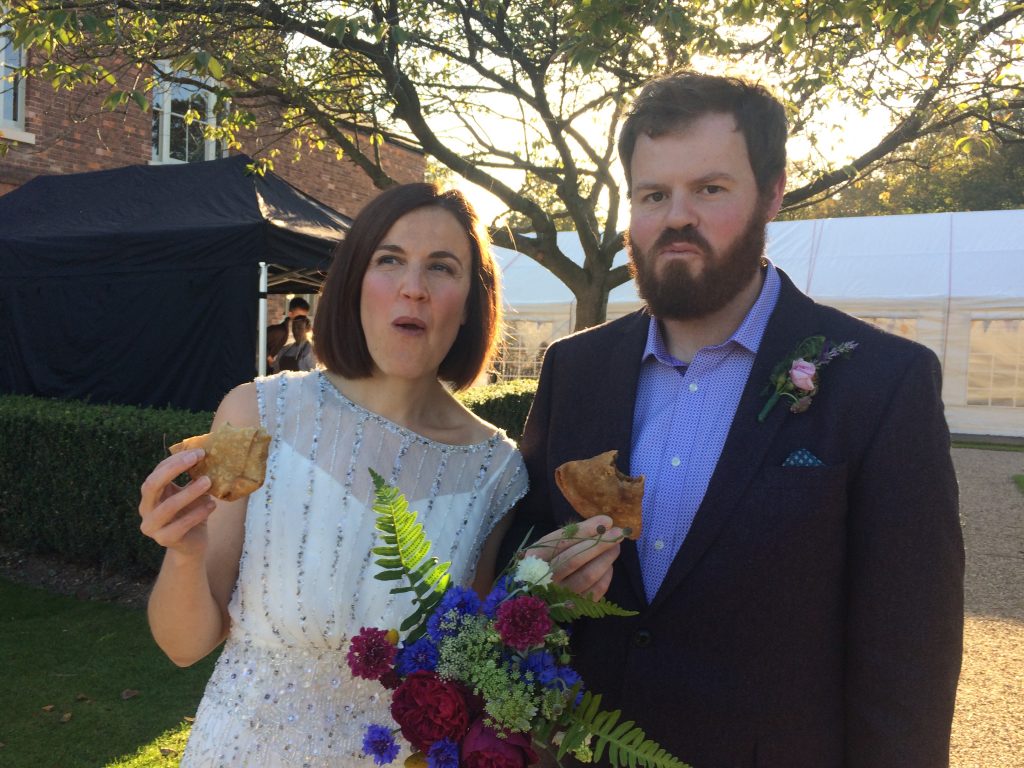 My favourite picture of the day

Normal life also meant Matt messing about with massive bits of wood – this time by sticking our heads onto temporary exhibition walls – and me organising this event like any other work event that I’ve ever been involved in (cue production schedule, production budget, and various bits of tech). 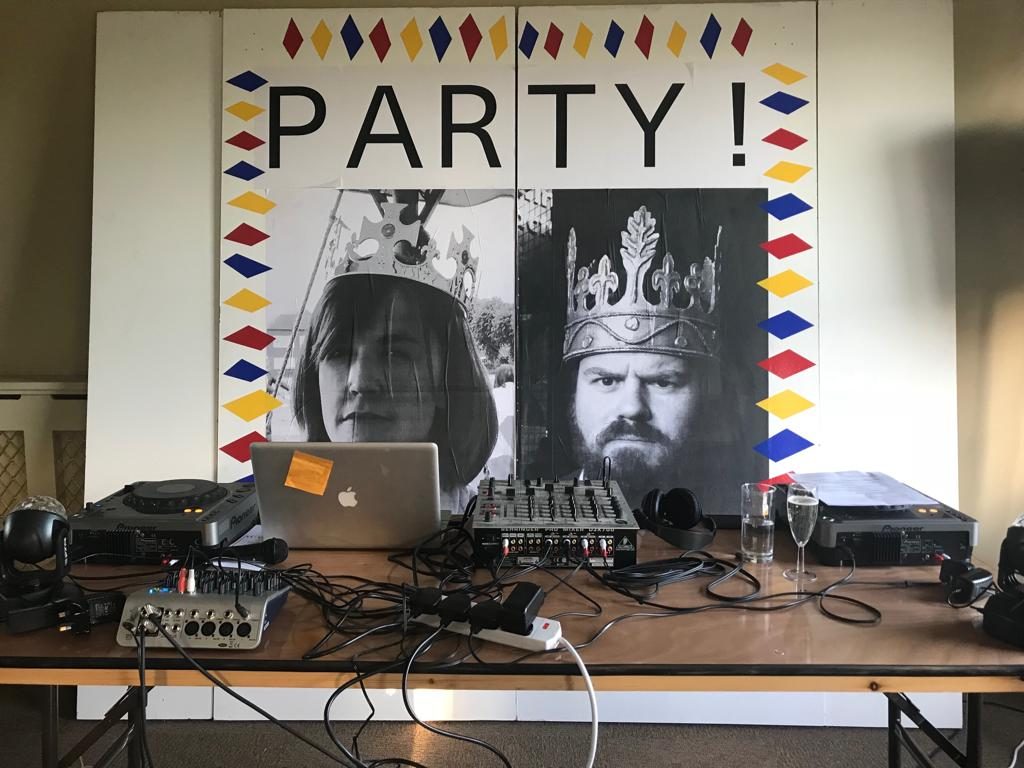 I digress. The other noteworthy creative skills were from our bakers, and in particular Helen Annetts (my work sister) with her epic allotment cake. I didn’t want a regular wedding cake so Helen “volunteered” to have a go at making a novelty cake – as it turned out, a brilliant centre piece to our table of cakes, generously brought along by our guests for the best pot-luck dessert table I’ve ever seen. 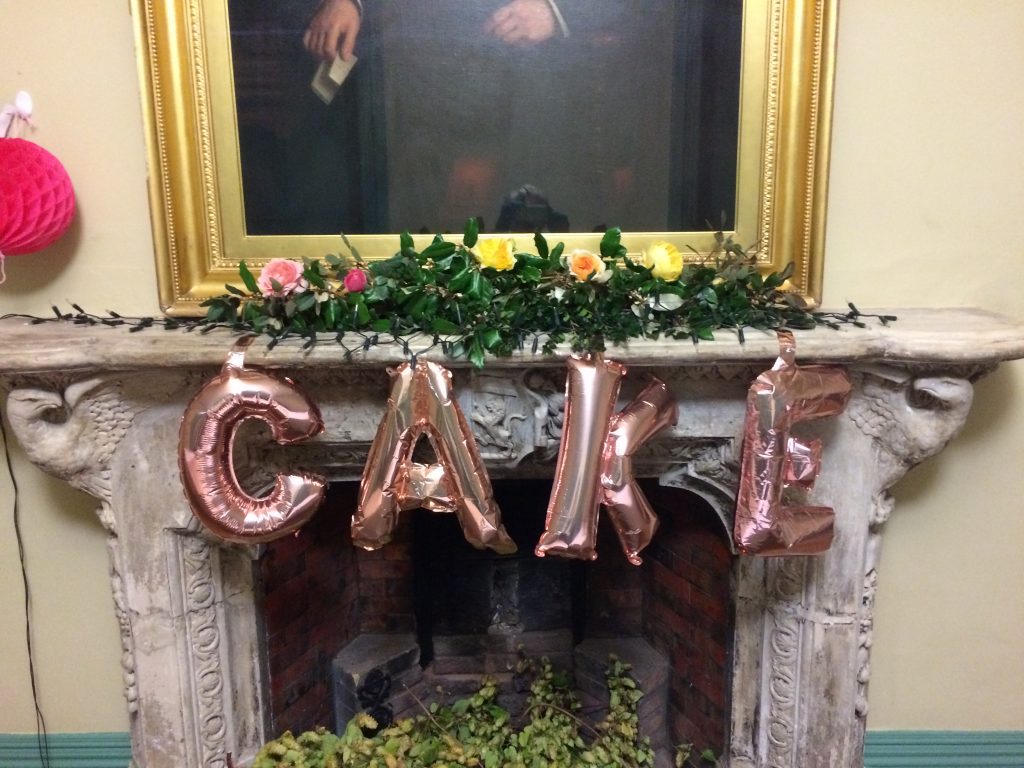 A room devoted to cake 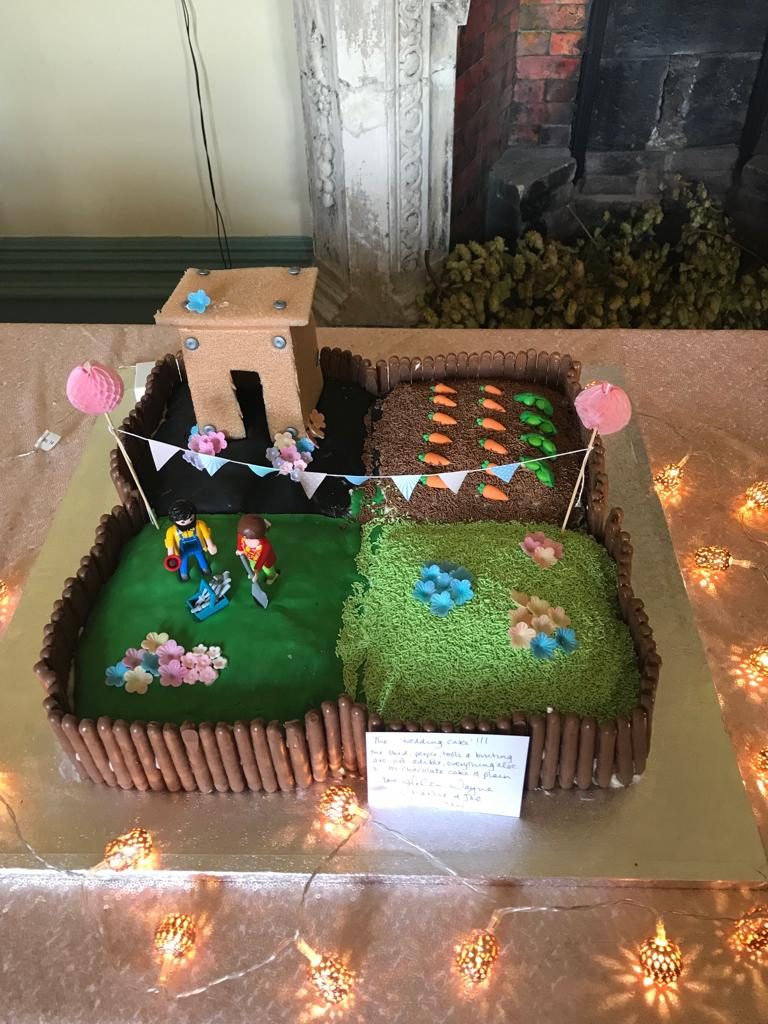 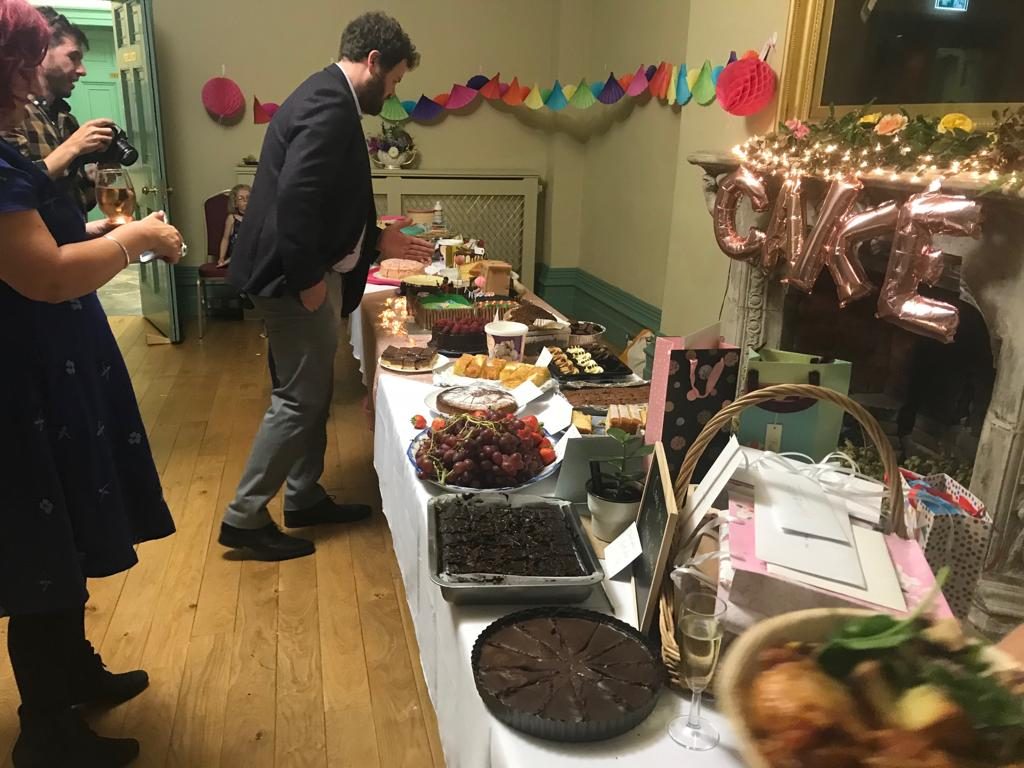 Why have one cake when you can have 30?

So now we’re holed up in a farmhouse in Cornwall, looking forward to life getting back to normal and introducing Harry to the joy of October beaches and cream teas.

I am not a very scientific allotmenter. Old-school gardening books talk about soil structure, phosphorous, lime, pH levels and so on, and I’ve never got to grips with any of it (though never say never). But I do know that – just as you can’t expect a human to perform well on a diet of Big Macs and Coke – our soil needs a little help every now and then. Poor soil = poor veg. And so this weekend my Dad brought a lorryload of manure to Birmingham and we spend a few hours carting (or wheelbarrowing) bags and bags of the stuff from the lorry to the allotment.

It’s not been spread yet – a job for another day. And actually, given that most of my days are spent on the floor/sofa/bed singing If You’re Happy and You Know It, it was good to be outside, stretching my limbs. I just need the weather to warm up. Spring, come soon! 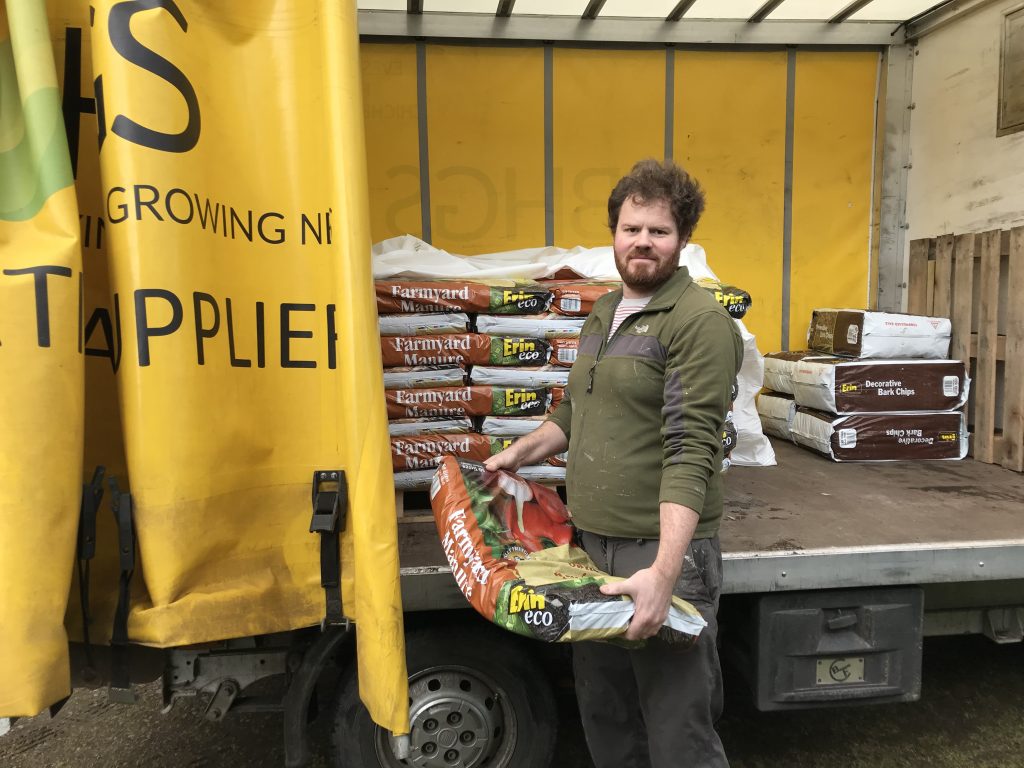 Matt gets his hands dirty 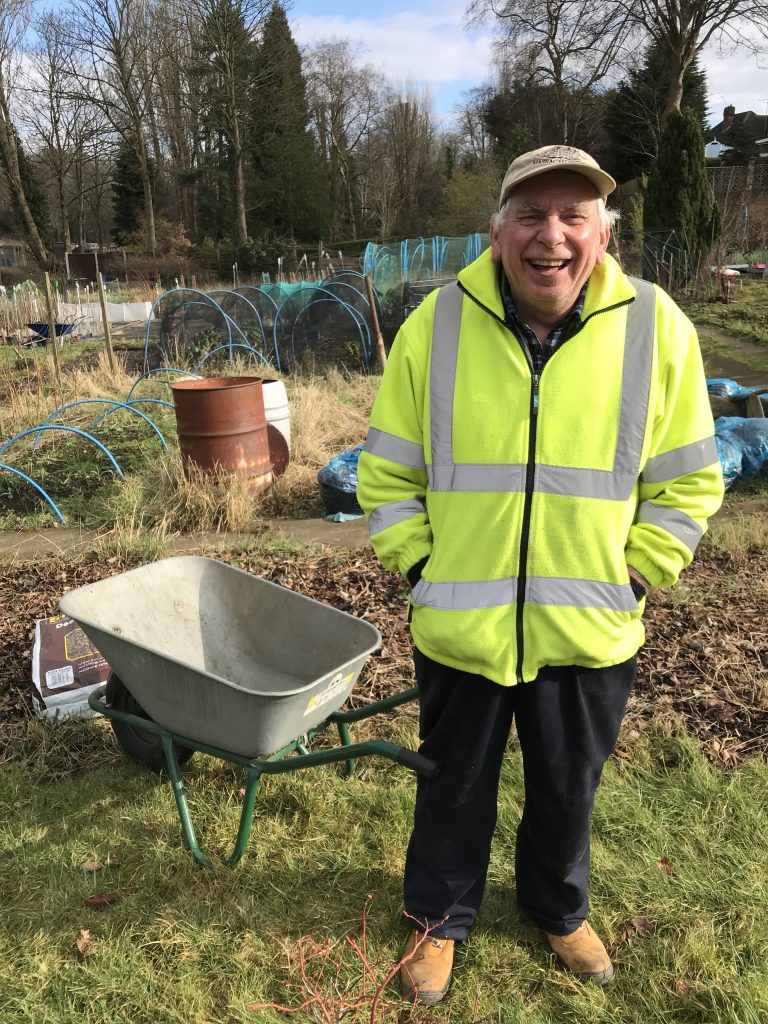 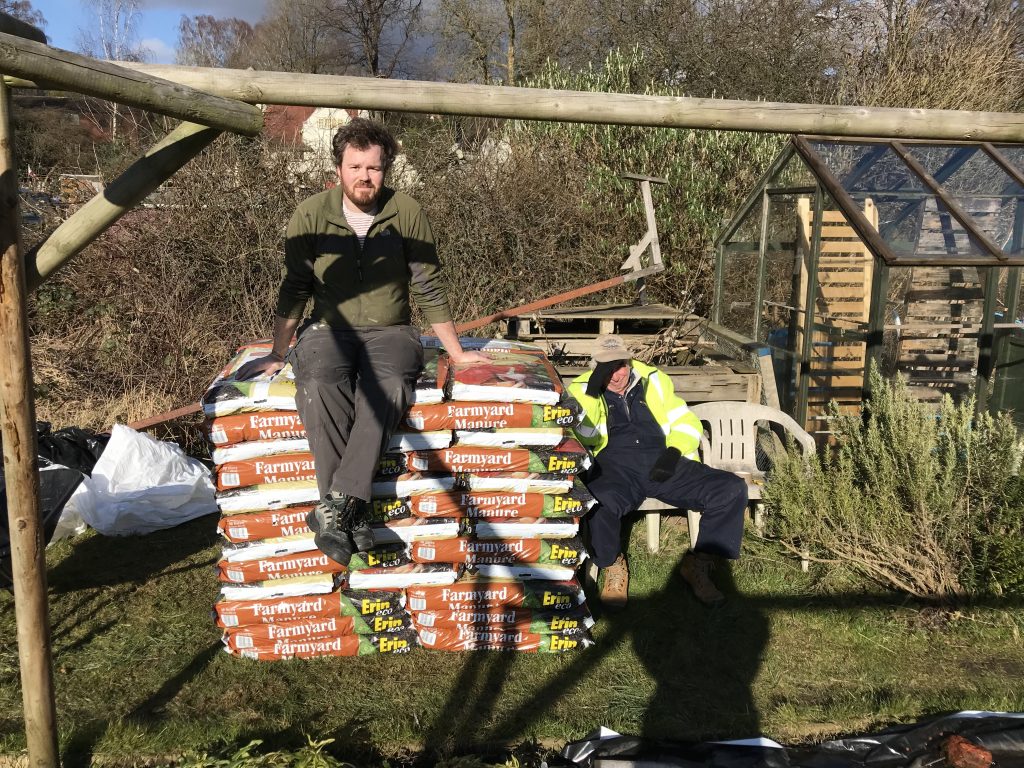 A pallet of poo successfully moved 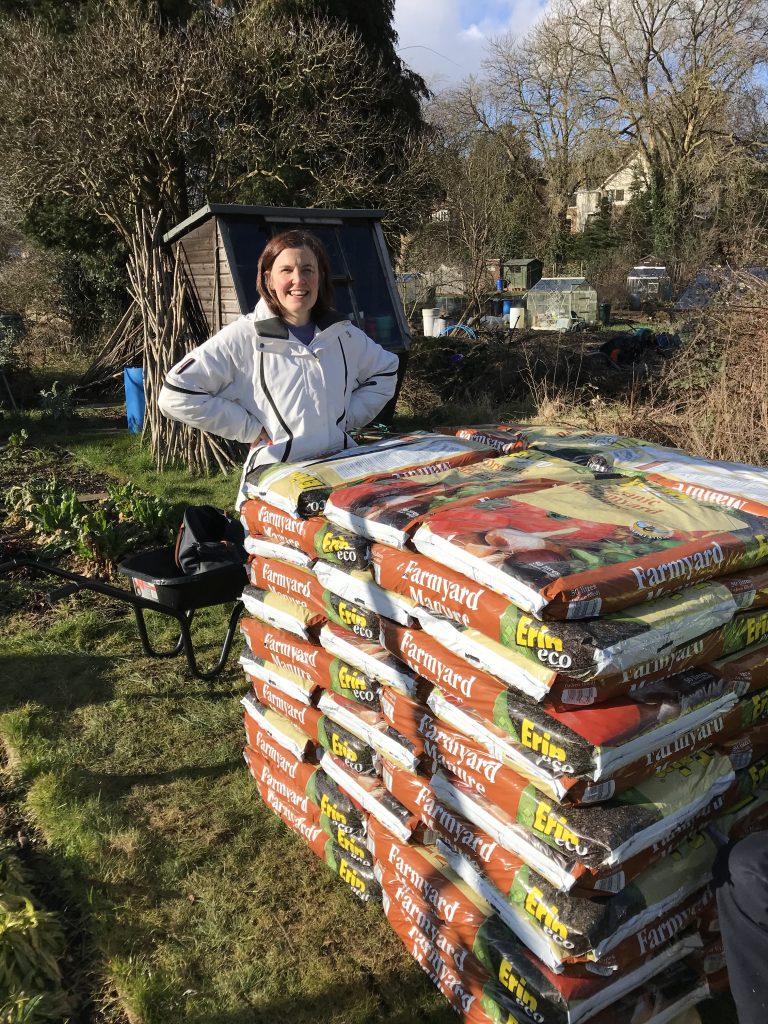 Now just got to spread the stuff…