The oppressive heat, horrible things in the news, and long, intense work hours have got the better of me this week. I received a work email on Friday lunchtime that, in ordinary circumstances, would have made me raise an eyebrow and swear. Except on this occasion I read it, took an in-breath, and burst into tears. Note: I very rarely do this. I’ve studied yoga for twelve years in an effort to NOT do this! (I am willing to grant that pregnancy hormone might also be at play.) So I decided to be my own HR department, slapped the laptop shut, then headed to the allotment for an hour of pottering and seed sowing. I’ve learned that a very important part of being your own boss is learning the art of self-care: I can’t hope to work effectively if I am working to exhaustion. Plus I don’t get paid enough to put up with excess levels of BS.

At the start of the week, the greenhouse thermometer was reading a whopping 50c – now that is HOT. I thought that would spell disaster for all things green but actually, the tomatoes and squash are thriving and the sweetpeas are doing well. It’s a different story for the beans, greens and cosmos, which remain stunted. I’ve decided to cut my losses so pulled up the bolted summer rocket, forked over the ground and started again: Friday’s melt-down resulted in a productive and satisfying hour sowing neat lines of lettuce, chard, parsnips, rocket, kale (for salads) and green beans. A positive outcome….if they grow! 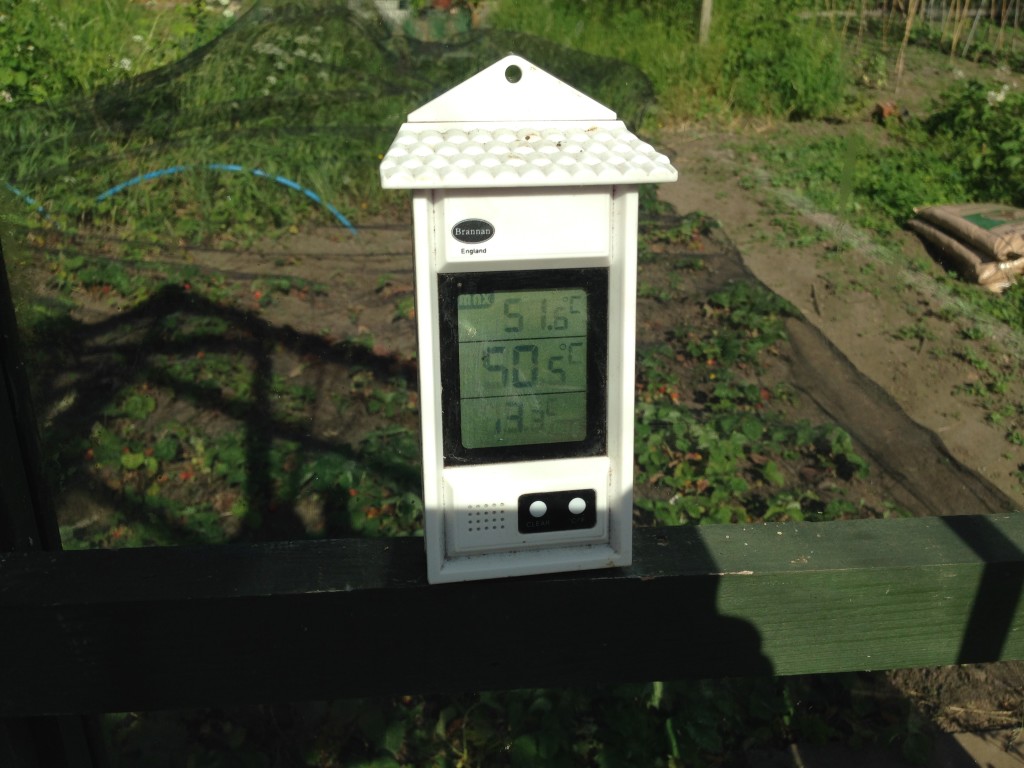 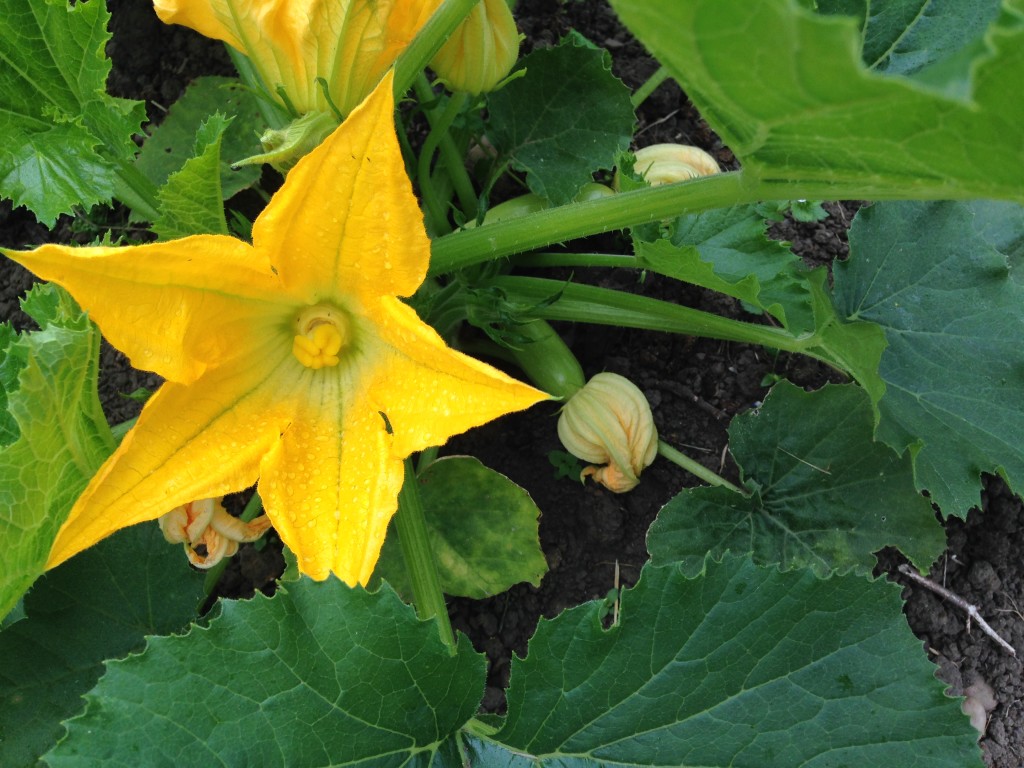 The courgettes and squash are thriving, and in a week we’ll be inundated 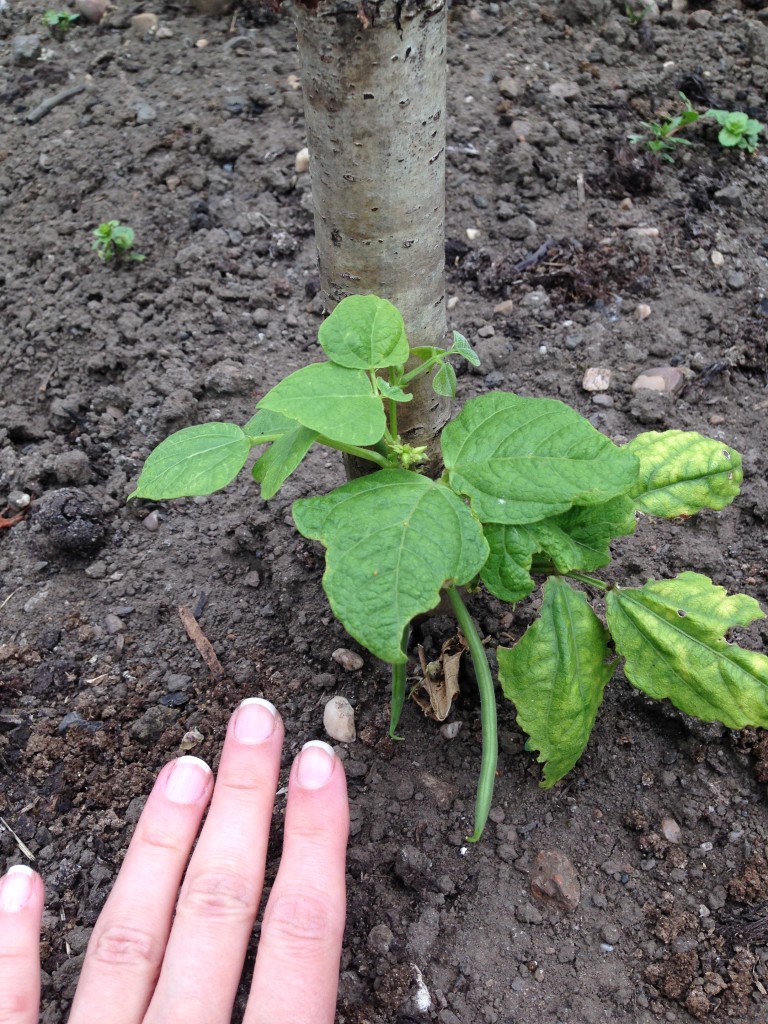 But beans are a different story – the plants are just a few inches tall, my hand here for scale 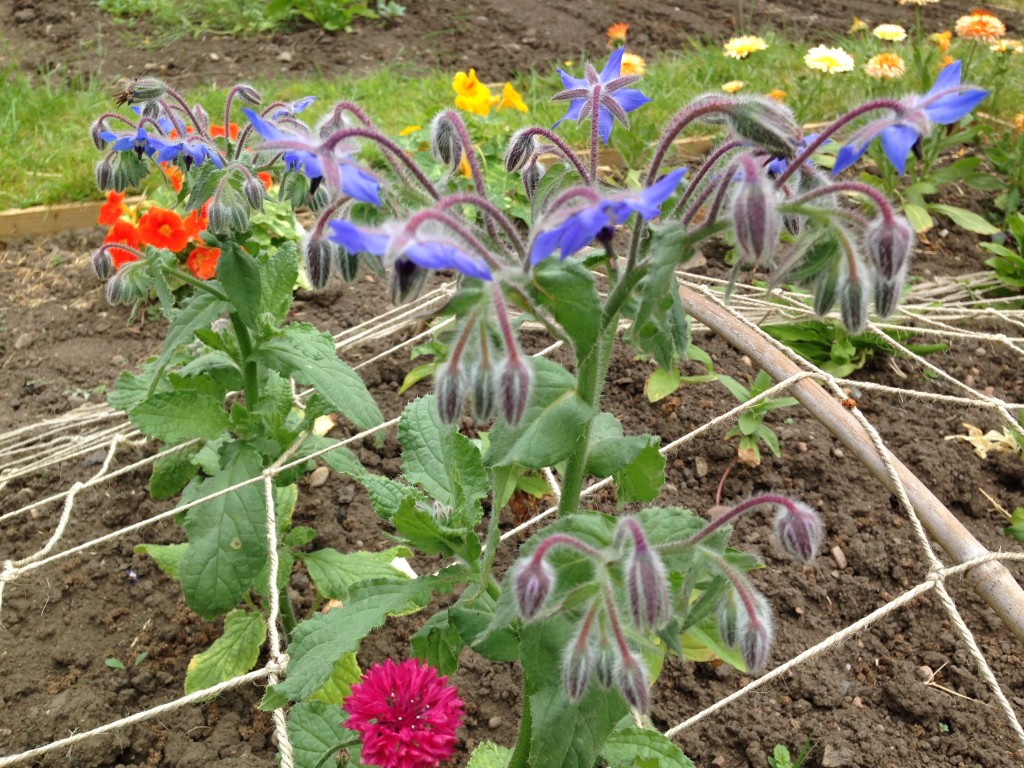 The ‘wild’ flowers I started from seed have come true, great for bees, but the cosmos plants are small and unpromising. I’m really saddened by this, it seems that cosmos are a vital part of my allotment happiness. 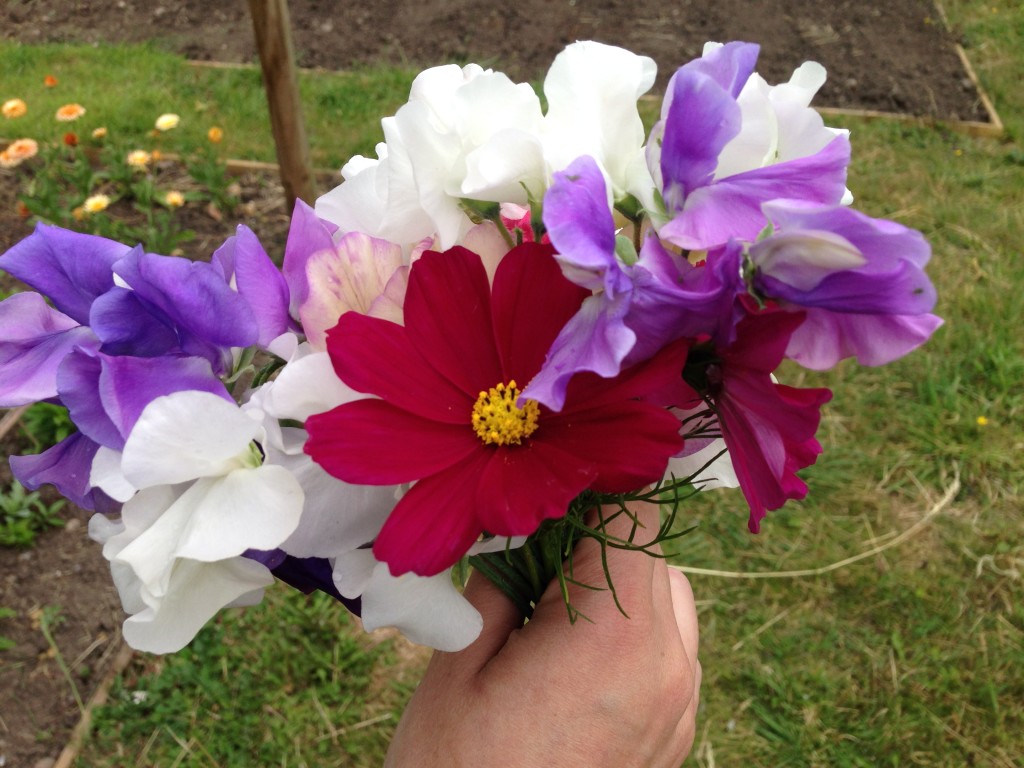 Getting several posies of sweetpeas a week, though only one single cosmos bloom so far!

It’s soft-fruit-glut-stress season. We were in Tamworth yesterday and Matt’s mum passed us a few bags of rhubarb and gooseberries from their allotment – she’d texted earlier to ask if I wanted any and I of course said yes but, and I quote, ‘not lots’. There are only two of us after all. But soft-fruit-glut-stress is a universal experience and so I quite understood when we were handed a few kilos of goosegogs and more rhubarb than I’d get through in a year. No-one likes waste. I’ve been plotting to alleviate my own soft-fruit-glut-stress by inviting my friend’s kids over to pick blackcurrants as an after-school activity (hopefully Helen won’t swear too much when she realises that this activity could lead to hours topping and tailing fruit before sweating over boiling vats of jam). 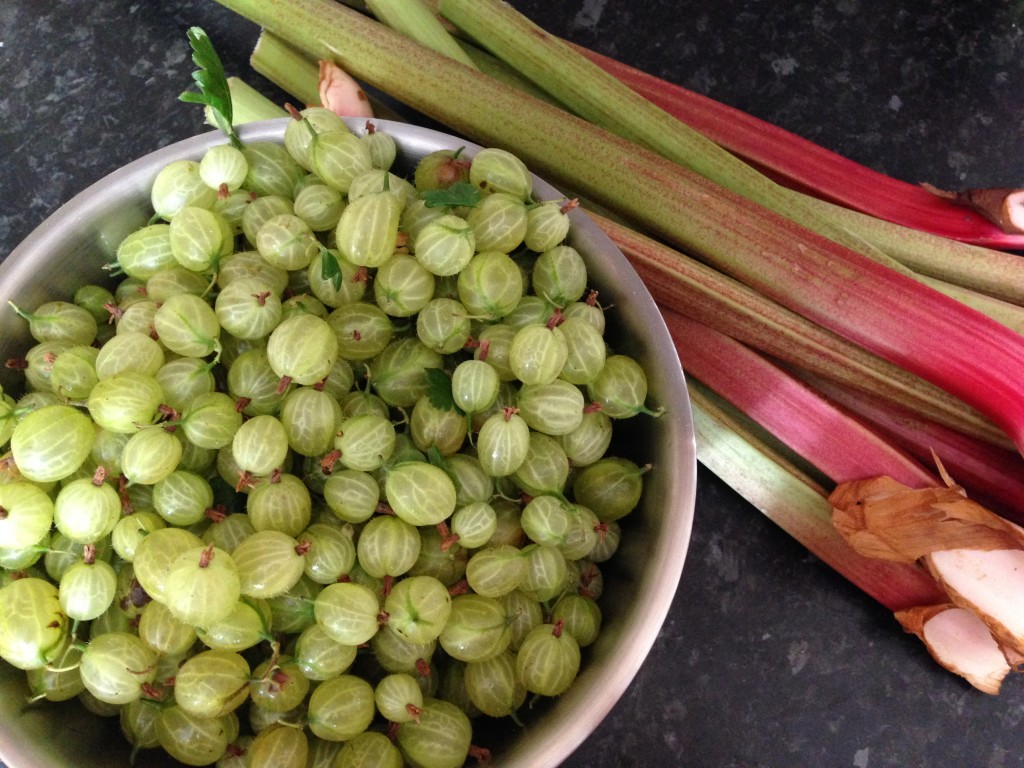 The Tamworth gooseberries are fab: plump and fat and firm. I also had a few strawberries kicking around from the allotment that needed using up and, inspired by last weekend’s forays into redcurrant and strawberry jam, wondered if the sweet strawbs would be a good foil to the sharp green gooseberries. Only one way to find out: gooseberry & strawberry crumble it is.

I don’t have any quantities for this, just a method that can be adapted according to whatever fruit is in season. It’s how my Mum makes crumble, and it’s probably what her Mum did before her. First, get enough berries to fill your crumble dish to the brim (they’ll cook down lots). Make sure the berries are hulled / topped-and-tailed, and pop them into a mixing bowl. 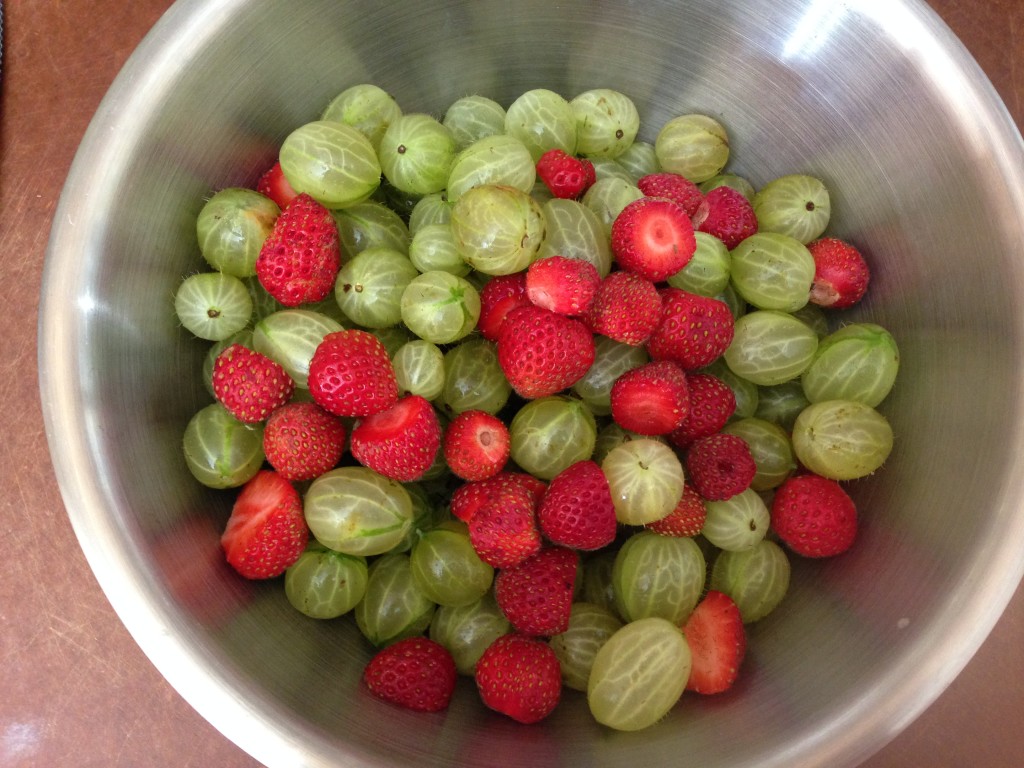 For a summer crumble, prep the fruit and place in a mixing bowl

Add cornflour (to thicken the juices) and sugar to the fruit. For this quantity (feeds 4) I added 5 dessertspoons of caster sugar and two of cornflour, but if you like it sweeter then just add more sugar; I like my crumble on the sharp side. If I’d had any oranges lying around then I would have scrapped in some zest here too. 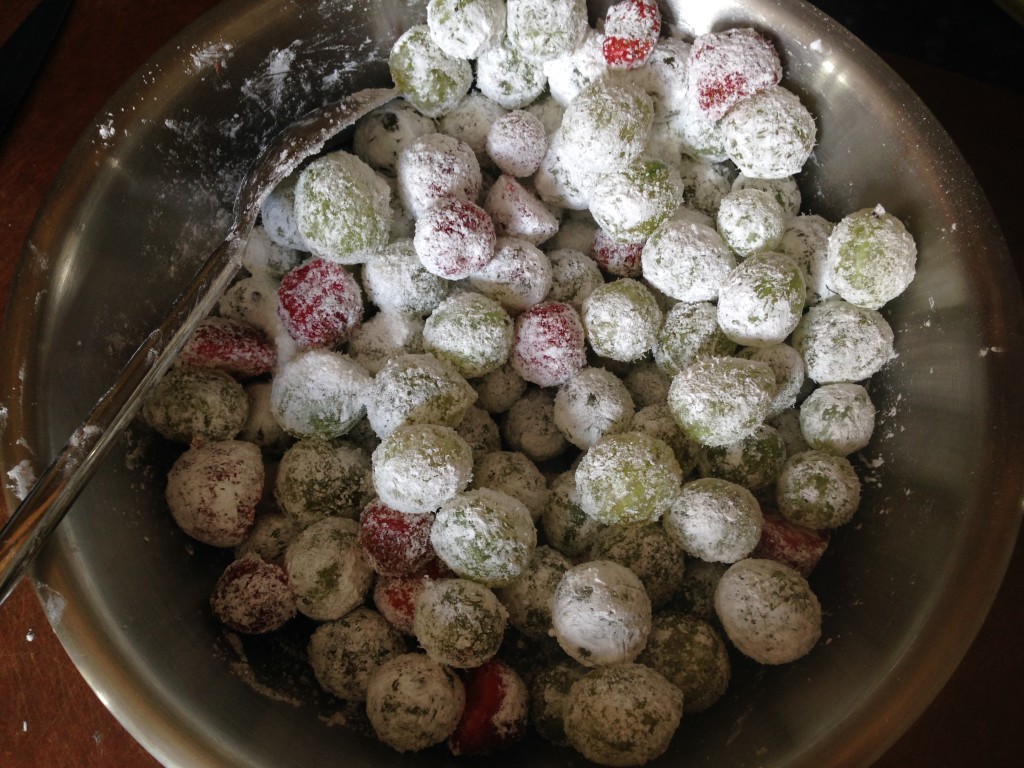 Toss in sugar and cornflour, and perhaps orange zest if you’ve got some lying around

Pile the fruit into your oven-proof crumble dish, then make the crumble. Rub 150g unsalted butter into 300g plain flour until the mixture looks like fine breadcrumbs, then add 150g caster sugar and a handful of flaked almonds for crunch. Cover the fruit with a thick layer of crumble, pressing the topping down fairly firmly. There will likely be leftover crumble mix, in which case it can go into the freezer for another day. Bake the crumble at 170c for about an hour, or until the fruit is bubbling up the sides and the crumble is browned. The cooking time depends on the surface area of your crumble dish – the wider the dish, the quicker the crumble will cook. 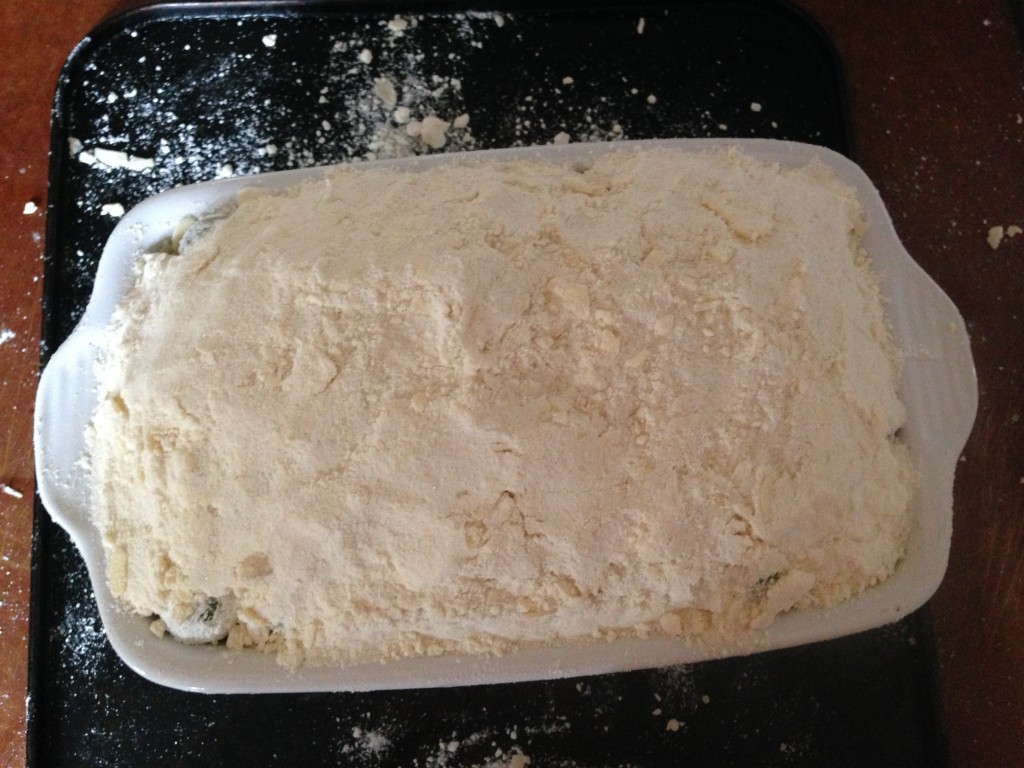 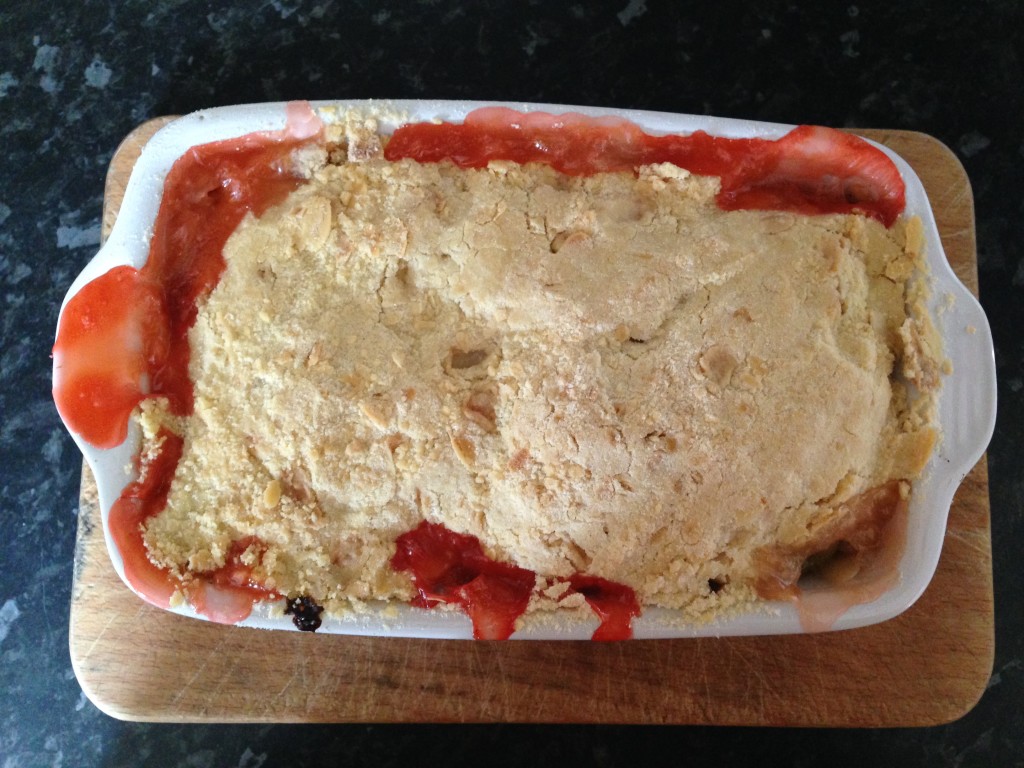 I think this is better at room temperature than boiling hot, but each to their own. Cold runny cream is definitely a must. Gooseberries and strawberries…the essence of mid-summer.

Enough strawberries and gooseberries to fill your crumble dish

Prep the fruit: top and tail the gooseberries, and hull the strawberries. Put them in a mixing bowl and mix with cornflour and caster sugar. Quantities will depend on how much fruit you’ve got but for four people, I’d use 2 heaped dessertspoons of cornflour and 5 dessertspoons sugar.

Make the crumble: rub the butter into the flour until it resembles fine breadcrumbs, then stir in the sugar and almonds. Top the fruit with the crumble and press down fairly firmly. Any leftover crumble mixture can be frozen for another day.

Bake at 170c for about an hour until the fruit is bubbling and the topping is golden. Cool slightly before eating.

Sowed: Chard, lettuce, Tuscan kale, Frills of Hex kale, parsnips, summer rocket, green beans, sweetcorn, basil, parsley
Harvesting: Sweetpeas, strawberries, winter rocket, baby spinach, last broadbeans (Note to self: grow at least 30 broadbean plants next year, we’ve had far too few this year)
Reading: A little history of British gardening by Jenny Uglow; The first forty days: The essential art of nourishing the new mother by Heng Ou – a book which draws on traditional wisdom to nourish the new family (physically and emotionally) in the first days postpartum. I love this book, which was a birthday present from my friend Claire, but Heng’s recipe for placenta-cacao smoothie is not one that I’ll be making anytime soon.
Also: A lot of work (brochure writing, budgets, print jobs etc etc). Birthday gathering at Claire’s complete with Colin the Caterpillar and beauty tips from Joan Collins. Tentative foray into researching baby equipment (am totally shocked at how expensive buggies are). Matt’s been working 15 hour+ days for several weeks.