The first harvests of the year are coming, and it’s a mixed bag. The sweetpeas and soft fruit are abundant – redcurrants and strawberries, with the promise of blackcurrants and blueberries to come – but the greens and cut flowers are far from promising. Instead of the armfuls of greens that I’ve gathered in previous years, this summer the spinach has bolted before it’s reached 6 inches high, most of the lettuce has failed and the rocket is already in flower. The cosmos is tiny and the sunflowers leggy!

I raised our seedlings in the ‘sun room’ this year to make my life easier, but perhaps they would have been better off beginning life in the greenhouse….or perhaps it’s the lack of proper horse poo from Chappers’ field that’s the problem (we didn’t get any this year, partly because I was laid low with morning sickness from January to March, partly because it’s such a huge effort). But I’ve learnt that, when allotmenting, I have to put my expectations to one side: we both work (more than) full-time, I’m with child, we can’t use hosepipes, it gets cold then hot then windy. I can fuss and preen over a plant and it can fail, and the things that I ignore can yield extraordinary amounts. Plus not all is lost: the allotment can chuck up surprises and it may still all come good.

In the meantime, the first sweetpeas of the year are vivid and fragrant. 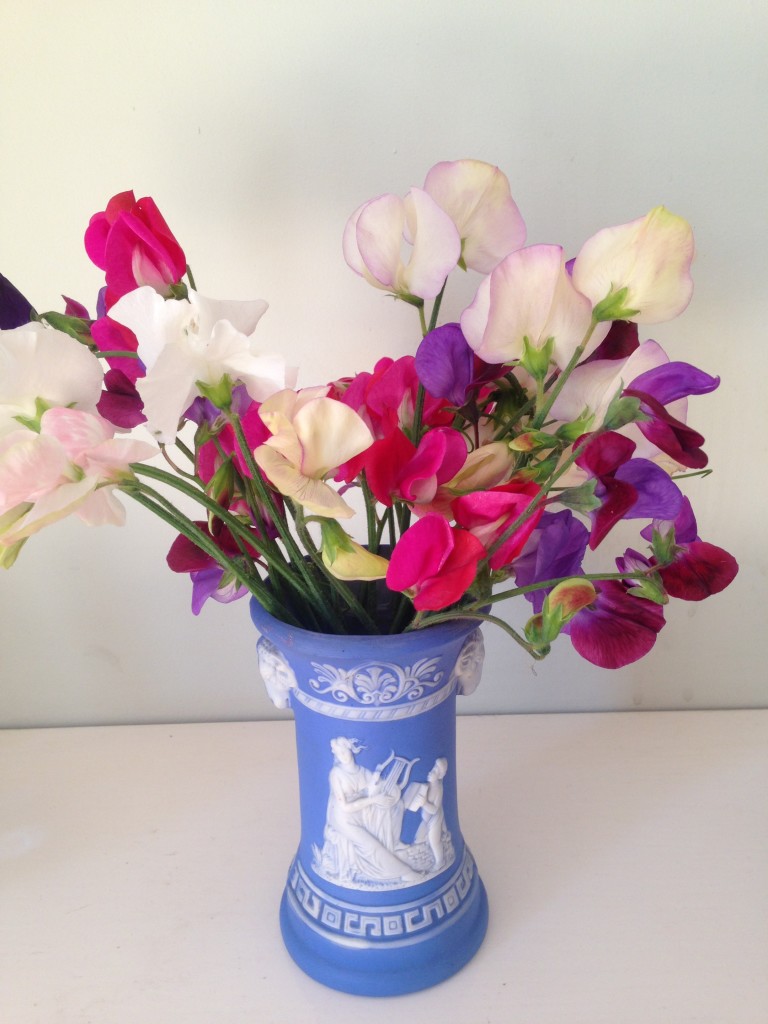 A few weeks ago I picked my first two strawberries, sweet and juicy, and I’m now collecting several punnets a week. They’re better macerated or turned into compote than eaten raw – on their own they have a curiously bitter aftertaste and don’t last longer than a day – but I can’t complain about the quantities. 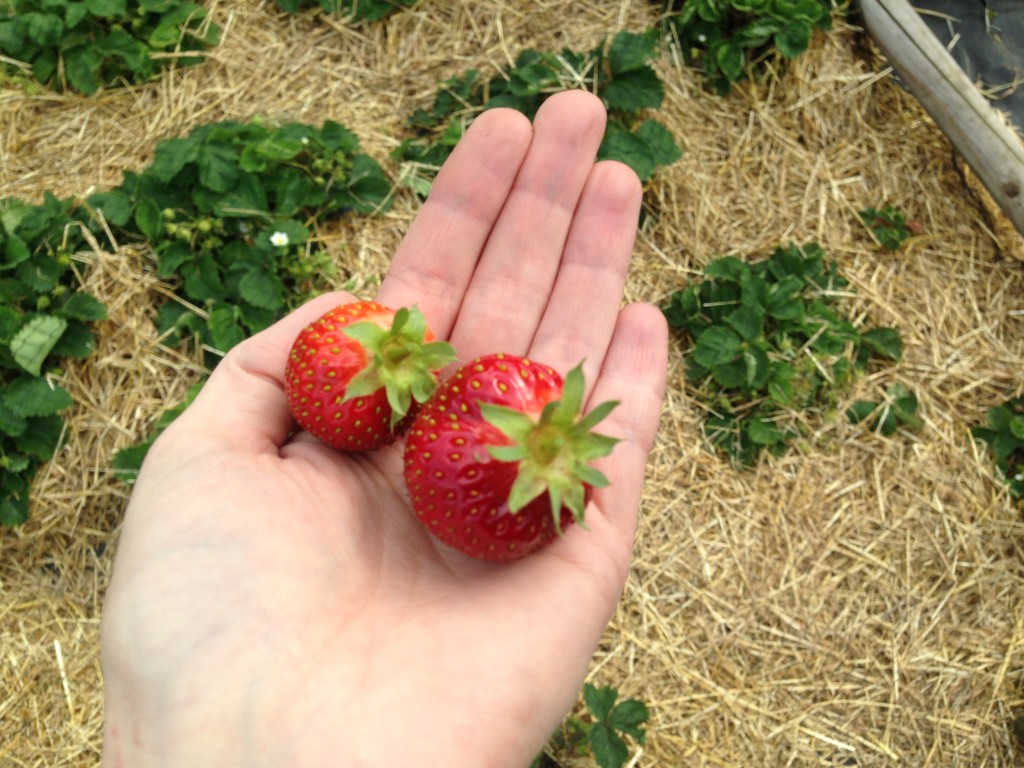 From a tiny start we now have a crescendo of strawberries! 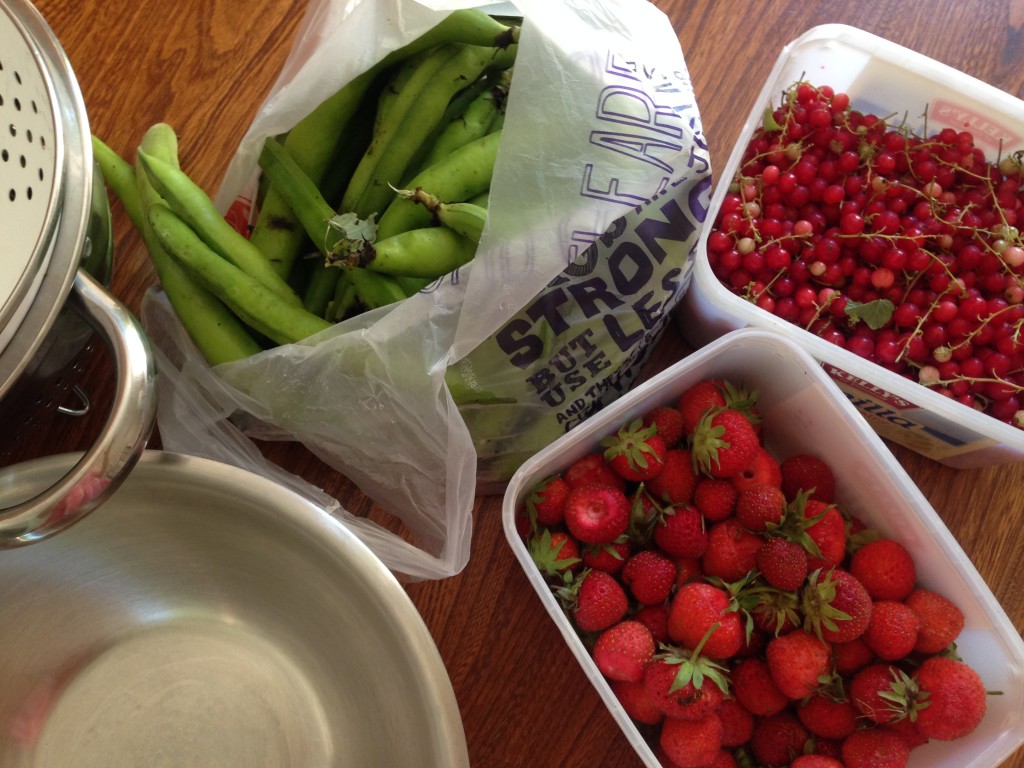 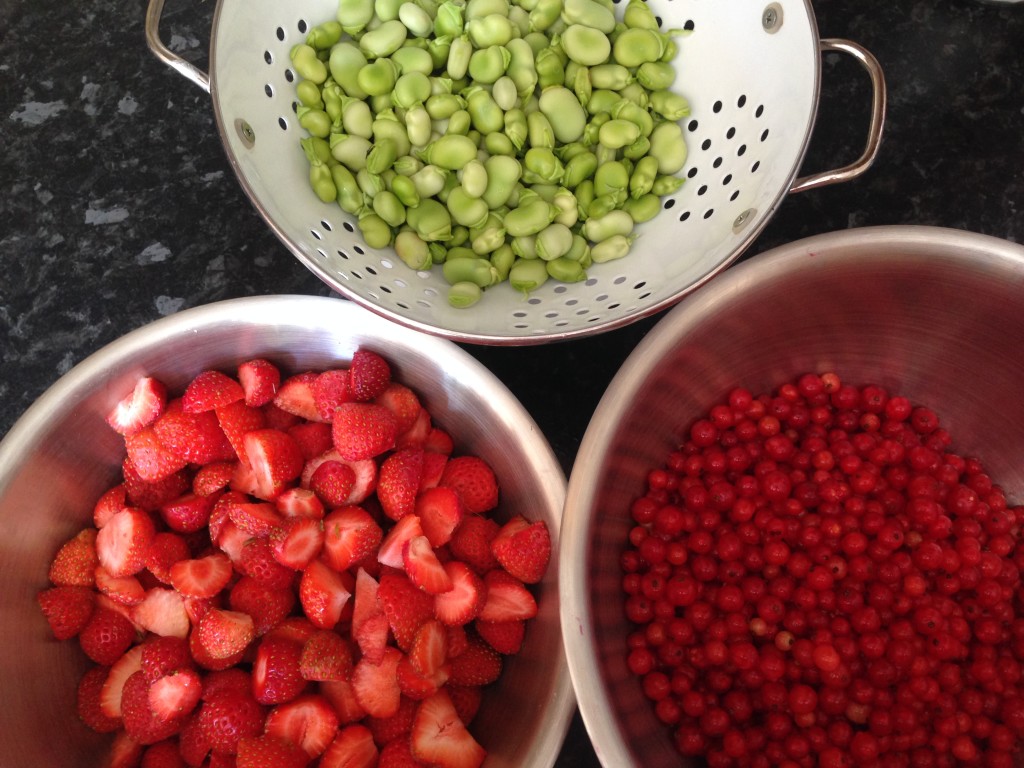 90 minutes later, beans are podded and fruit is prepped

In Cornwall last week I had a brilliant redcurrant and raspberry jam with my scone and cream. I’m not a massive jam lover, but this one was memorable – the sharp redcurrants cut through the insanely sweet raspberries and balanced it all out. I presume that the same effect could be had by matching redcurrants with other sweet berries and so, with all these strawberries, there was one obvious bit of summer cooking to be done: Strawberry & redcurrant jam it is!

First, place 700g granulated or preserving sugar into a bowl and pop into a low oven (160c) for ten minutes to heat up.

Next, warm 500g halved (or quartered if they’re massive) strawberries and 225g redcurrants into a preserving pan, and bring to a simmer over a medium heat. Lots of liquid will come out of the fruit and the berries will soften. 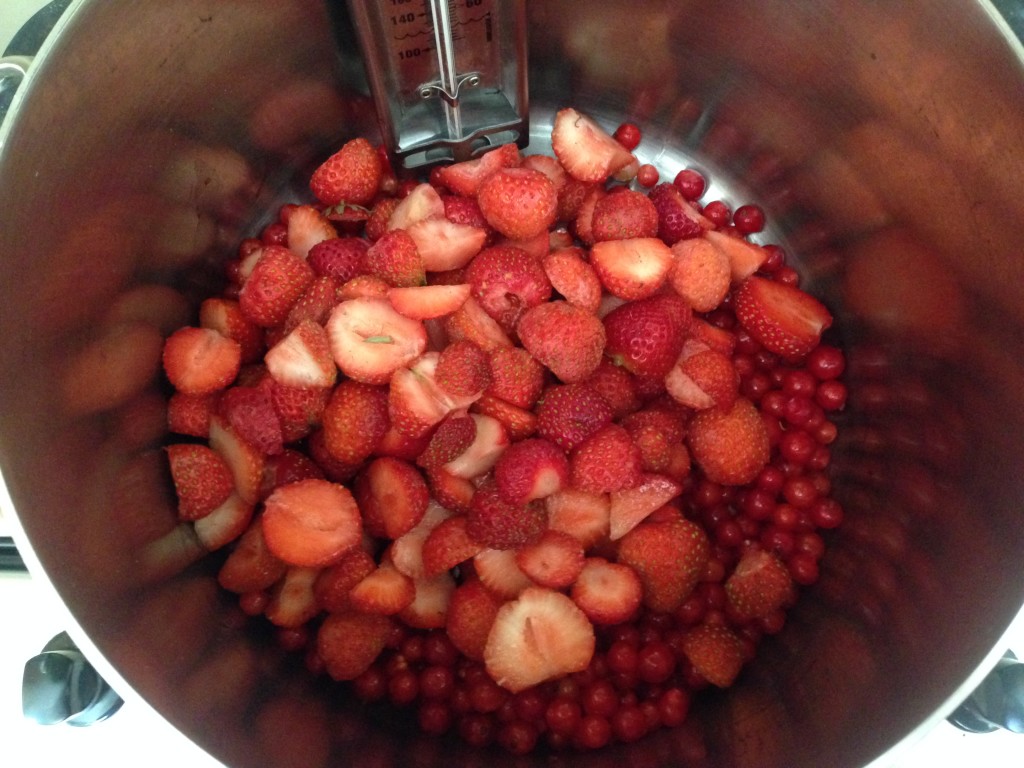 When you’ve got a soft liquidy mass, add the juice of one lemon, another 375g strawberries, 125g redcurrants and the sugar. Adding the fruit in two parts means you get nice chunky lumps in the finished jam. Stir over a low heat until the sugar has totally dissolved, and then bring to a boil. Have a jam thermometer ready! 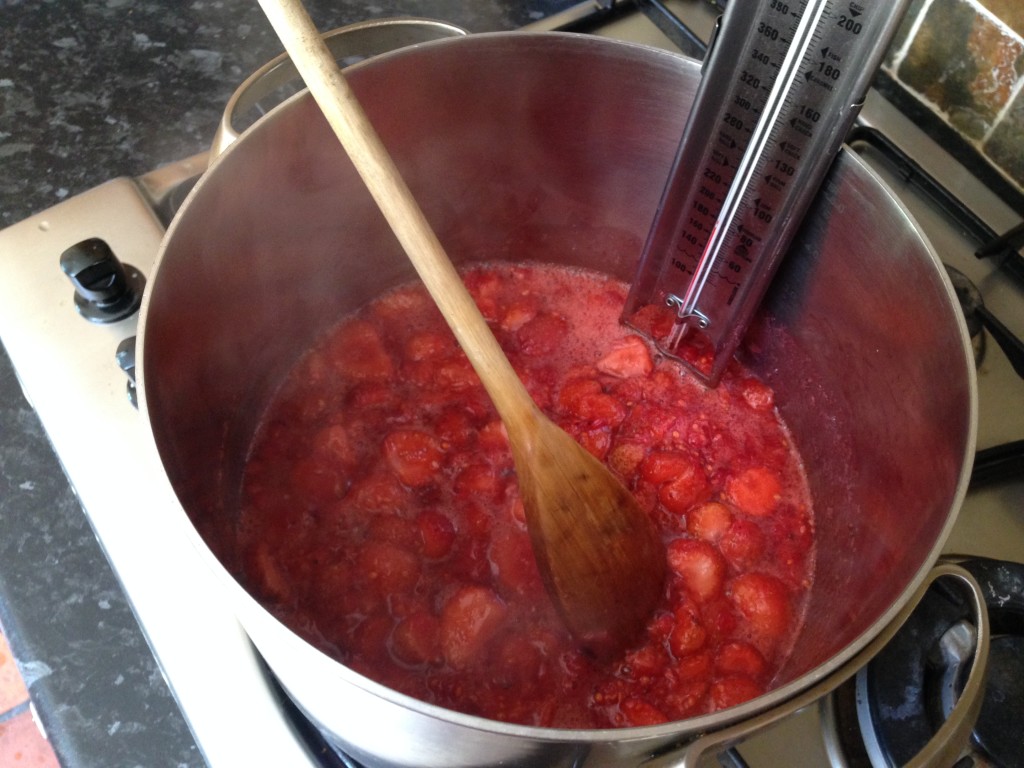 As the jam boils, spoon off any foamy scum that comes to the top. Be careful at this stage as the jam is hot hot hot, and will bubble up alarmingly in the pan. 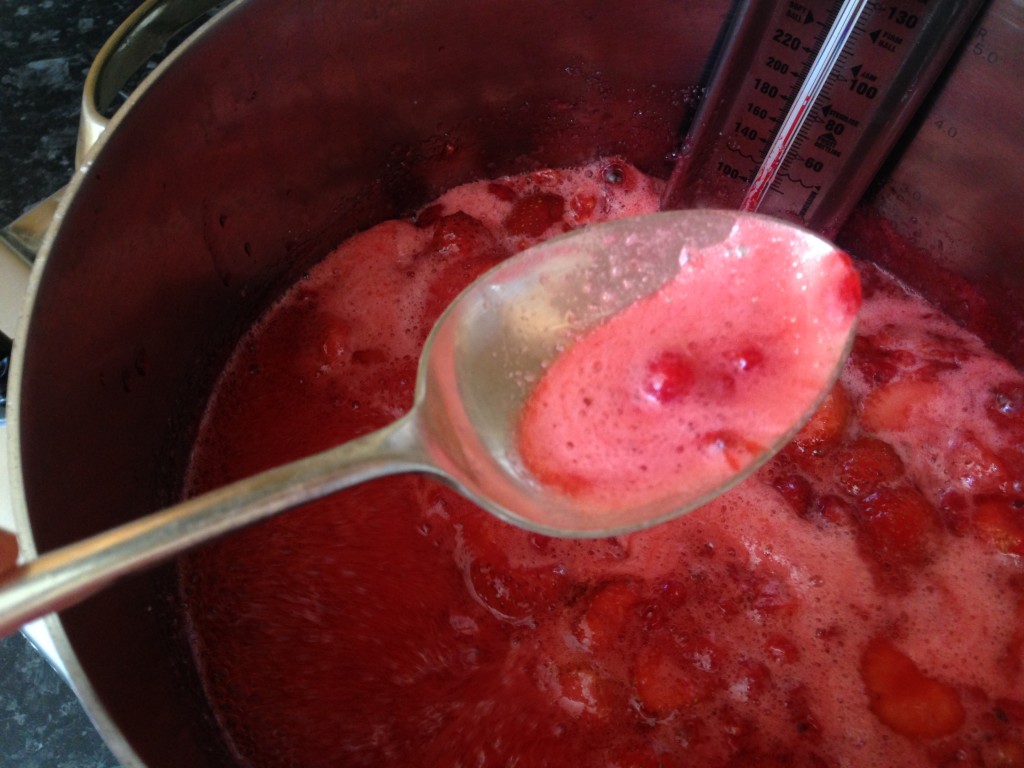 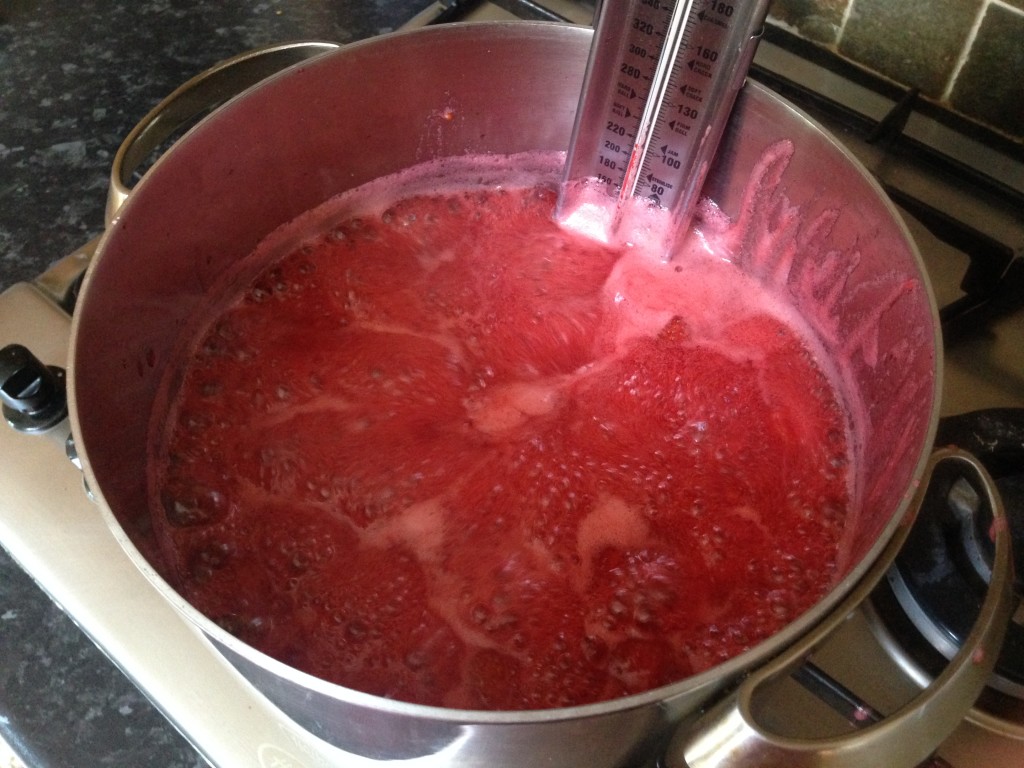 Cook until the jam reaches about 103c

Once the jam has reached 103c turn off the heat and leave the jam to stand for ten minutes or so. At this point prepare the jam jars: wash in soapy water, rinse, then heat in a hot oven (200c) until dry. Always put hot jam into hot jars, else the glass may crack. I use a jam funnel to transfer the jam to the jars, but you could use a spoon (if so expect it to be messy). Cover the jars with wax discs and cellophane tops, then leave to cool completely. Transfer the jam into warm sterilised jam jars, cover then leave to cool 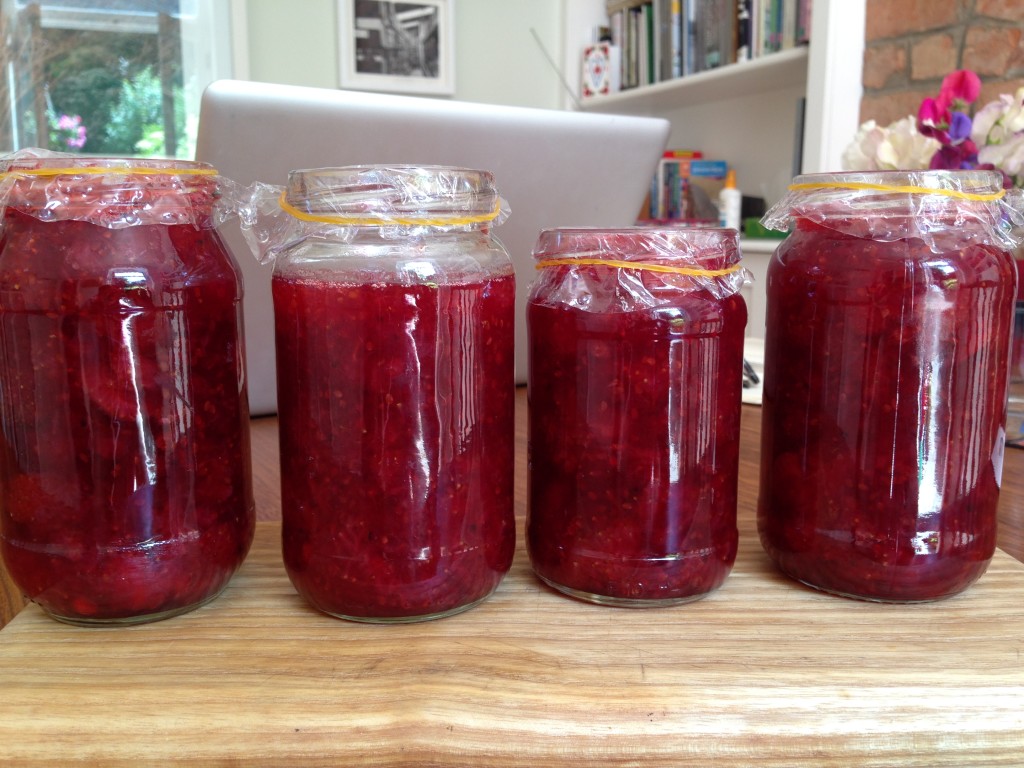 And behold, you have strawberry and redcurrant jam! A taste of June on the allotment.

350g redcurrants, stripped from their stalks

Warm the sugar in the oven (160c) for about ten minutes. Place 500g strawberries and 225g redcurrants in the preserving pan over a low heat and cook until the juice runs and the berries soften.

Add the remaining strawberries and redcurrants, lemon juice and sugar to the pan. Stir and cook over a low heat until the sugar is totally dissolved. Bring to the boil and cook until the mixture reaches 103c, about 20 minutes. Spoon off any foamy scum that comes to the top. Once the jam has come to temperature, turn off the heat and leave to cool slightly.

Whilst the jam is cooling prepare the jars: wash in hot soapy water, rinse, then dry in a hot oven (200c). Using a jam funnel, spoon the jam into the warmed jars, cover with waxed discs and cellophane tops, then leave to cool completely before eating.

One thought on “Strawberry & redcurrant jam”