I inhabit a few different worlds. My professional – and quite a bit of my personal – life is spent with energetic creative types who do fun and inspiring things amidst the urban din of Birmingham. People like this lot, who will be leading Birmingham’s Handover ceremony for the Commonwealth Games this weekend. There’s a rapper, a choreographer, a principal ballerina, a spoken word artist and a film-maker. We spent yesterday morning telling the press about plans for the ceremony, with time for a photoshoot amidst Digbeth graffiti. They will perform this Sunday to a worldwide television audience of around 1 billion people, so no pressure then (you can watch the Handover as part of the closing ceremony of the Commonwealth Games on Sunday from 11am on BBC2). 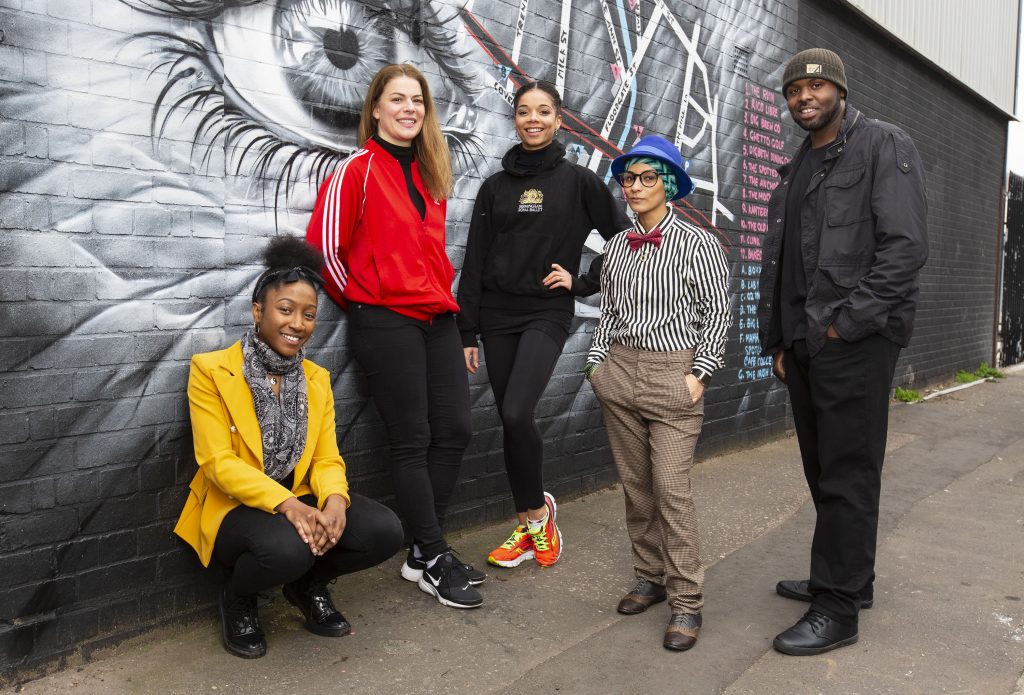 Then there’s the country/foodie life, which made me take a two hour round trip at the weekend as I had a hunch that new season asparagus would be on sale at Hillers, near Evesham. I was right. 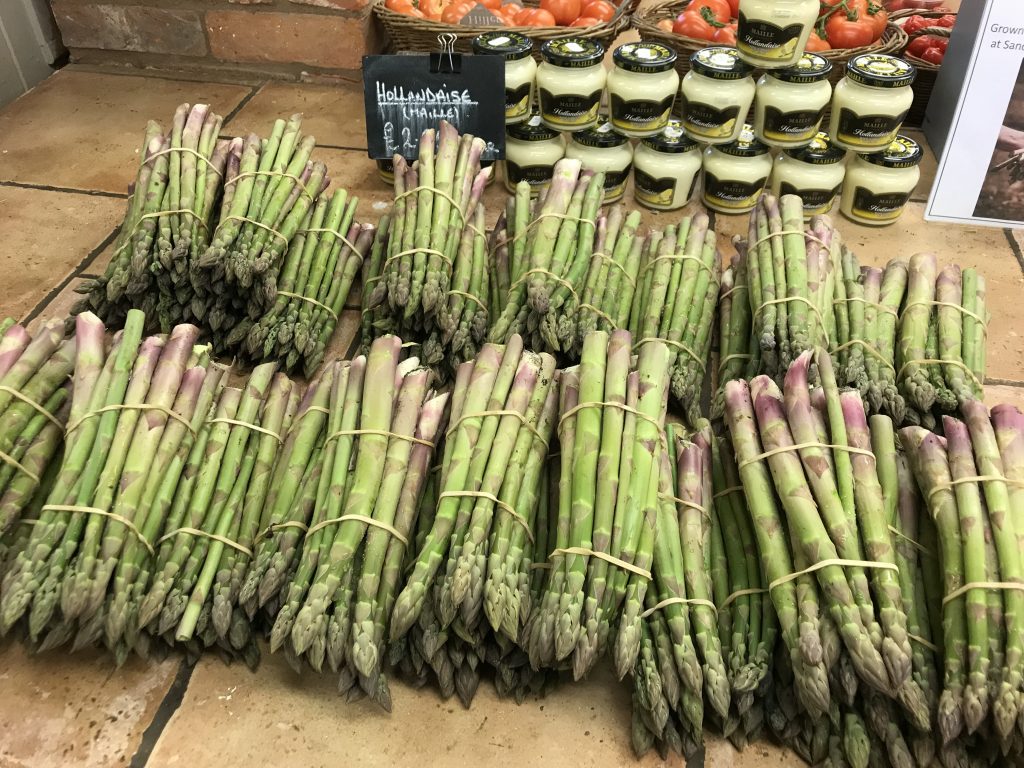 And then there’s the parent life, which involves a lot of nappies, washing-up, more nappies, cuddles, early nights and giggling. 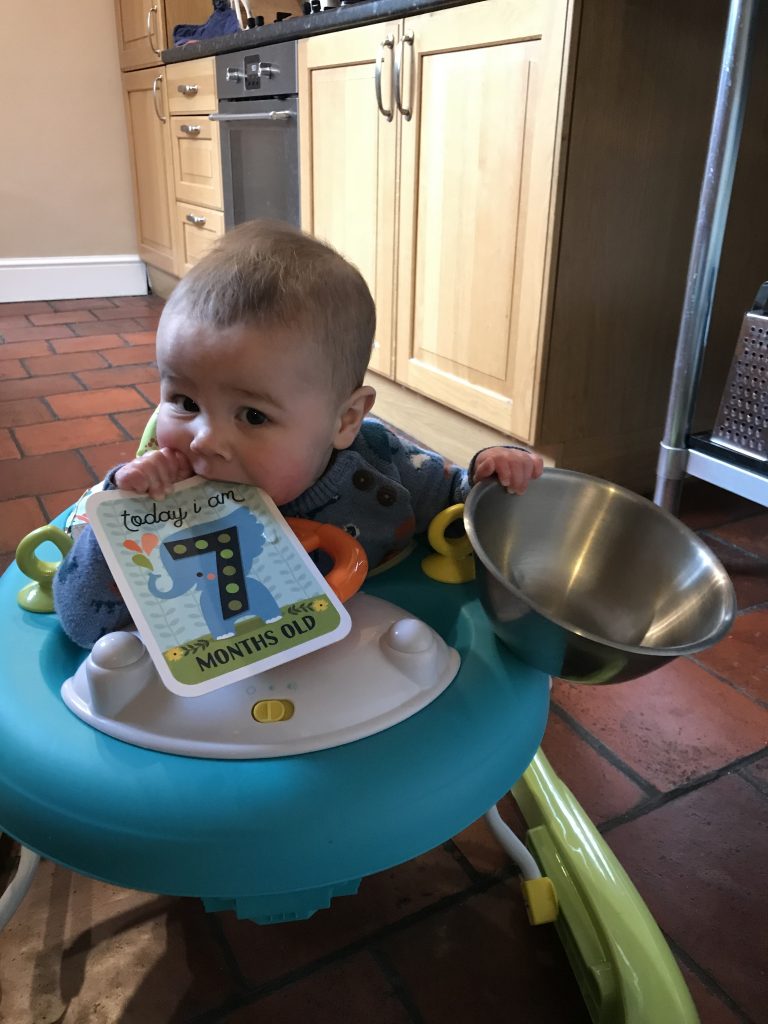 It’s a good mix of things. When the arty stuff gets too irritating I can head to the hills, and when the shire is too stifling I can retreat back to Brum. Or indeed retreat to the allotment. Last week I was blessed with four hours childcare – FOUR HOURS! – and headed down for some grafting with Gary, Matt’s Dad. The snow seems to have finally gone, and whilst it’s not warm, it is definitely now spring and there was mulching and manuring and soil-prep to be done. 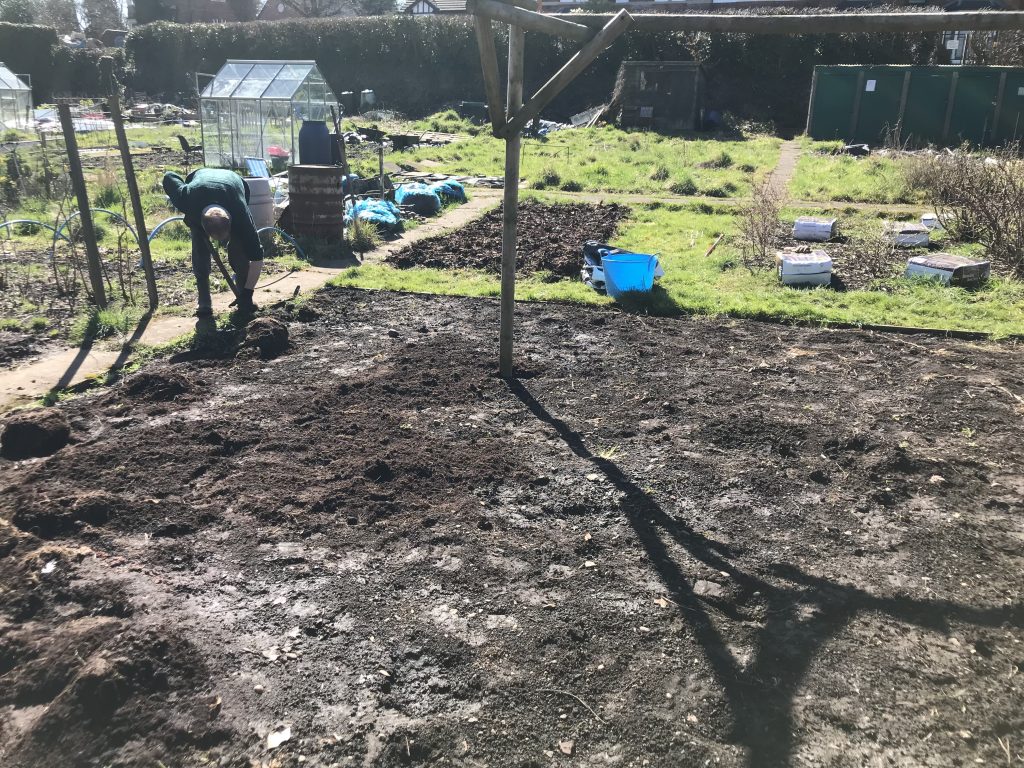 Gary gets to work on the allotment

Whilst I cracked on with putting a thick bark mulch on the raspberries, blueberries and currants, Gary stripped back the black plastic sheeting from the main vegetable plot. It was a relief to see that the soil was not in too bad a state: instead of forking and weeding it over in the autumn as normal, last October I merely pulled out the last of the sunflowers and covered the plot over with plastic (there was only so much I could achieve with a 1 month old baby). It survived this mistreatment well and only needed a light weed and fork before being mulched with rotted manure. Gary is incredibly neat and methodical, I discover – must be where Matt gets it from. I, on the other hand, take a ‘that will do’ approach and dig/manure half of the other plot in about an hour. I know whose approach is better (clue: not mine). 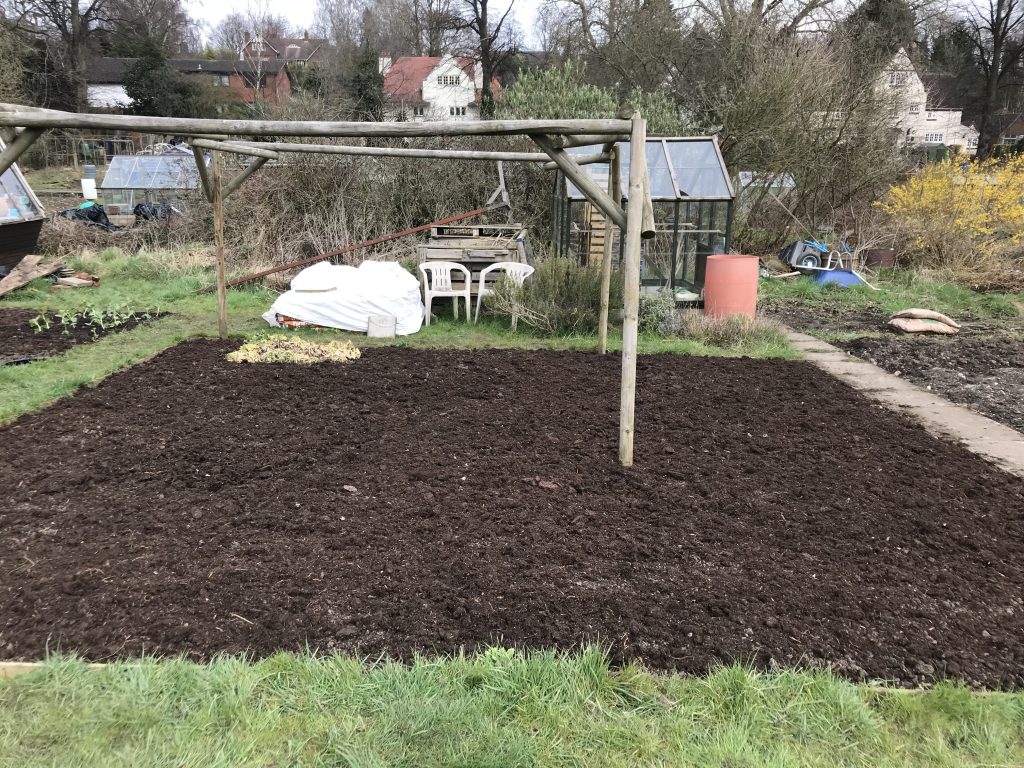 A few hours later, the main plot is forked over and manured. He did an amazing job. 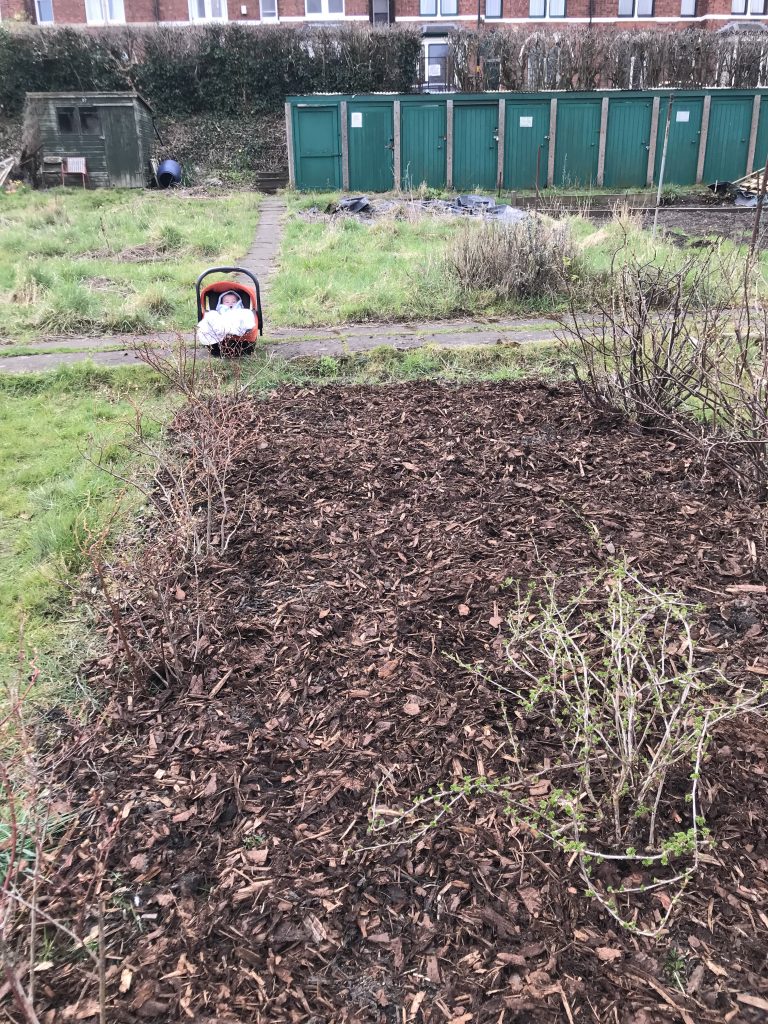 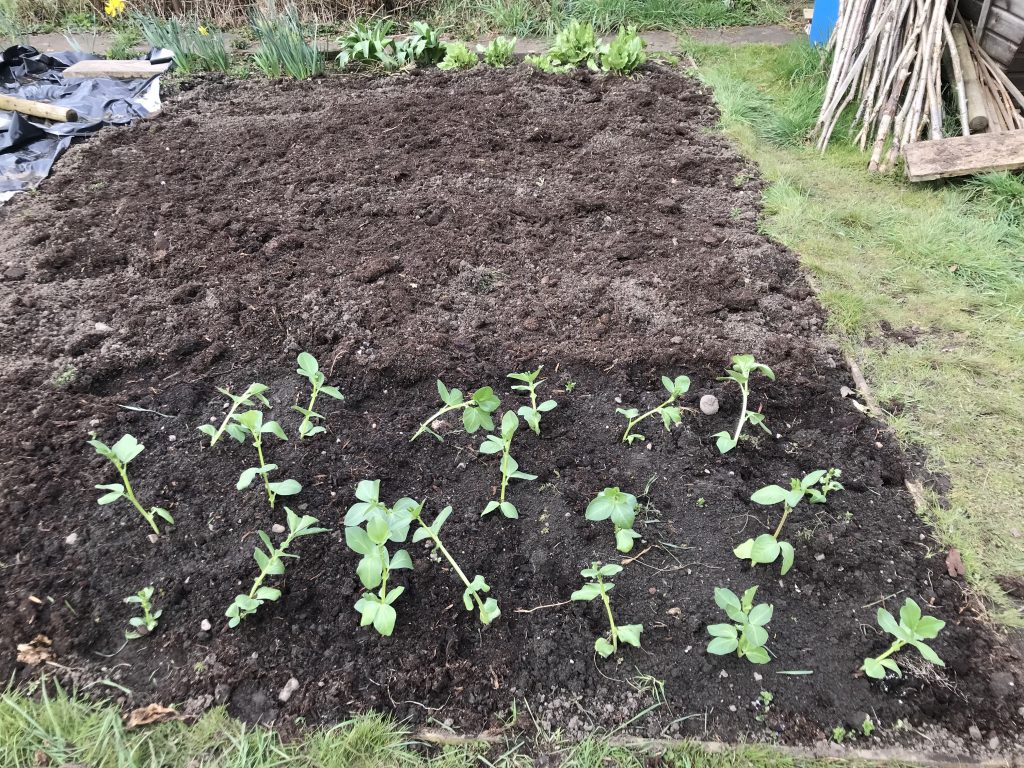 My efforts at manuring are significantly less tidy than Gary’s…but it will do. The broad beans take up their new home.

After just a few hours the plot is transformed from winter weeds to clean edged plots ready for planting out. The soil is still cold – daffodils only just coming out now, a month later than I would expect – but there is a tiny harvest to be had: I take the opportunity to pick a handful of new sorrel leaves, to toss with new potatoes and butter. 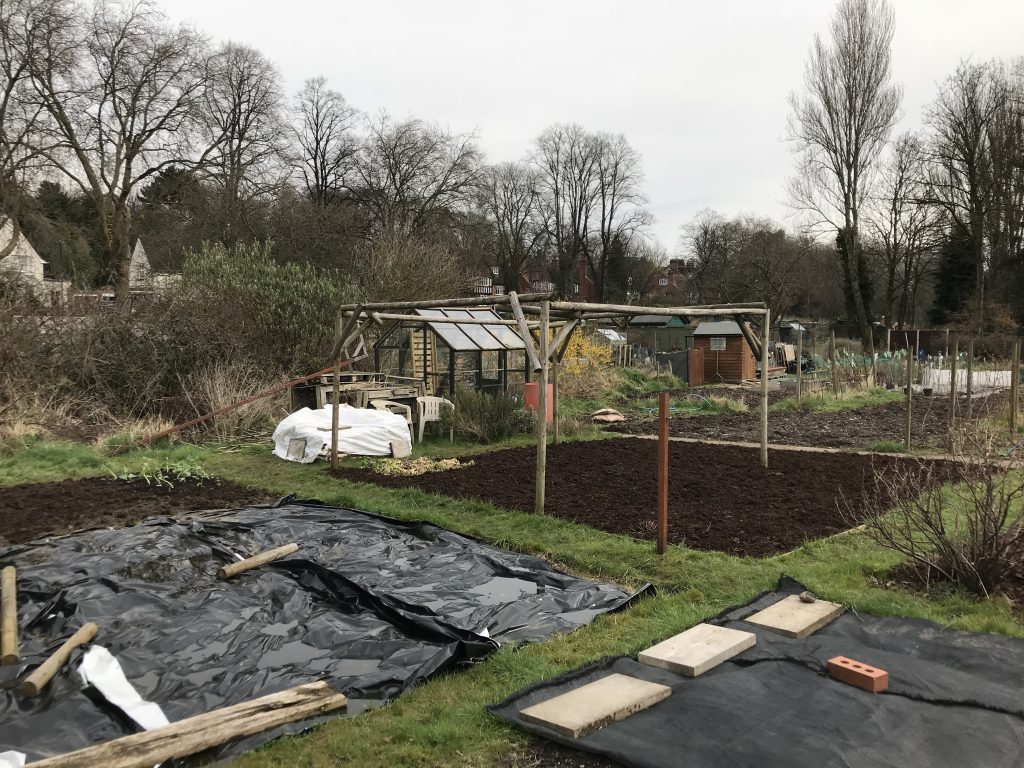 One and a half plots, ready for planting 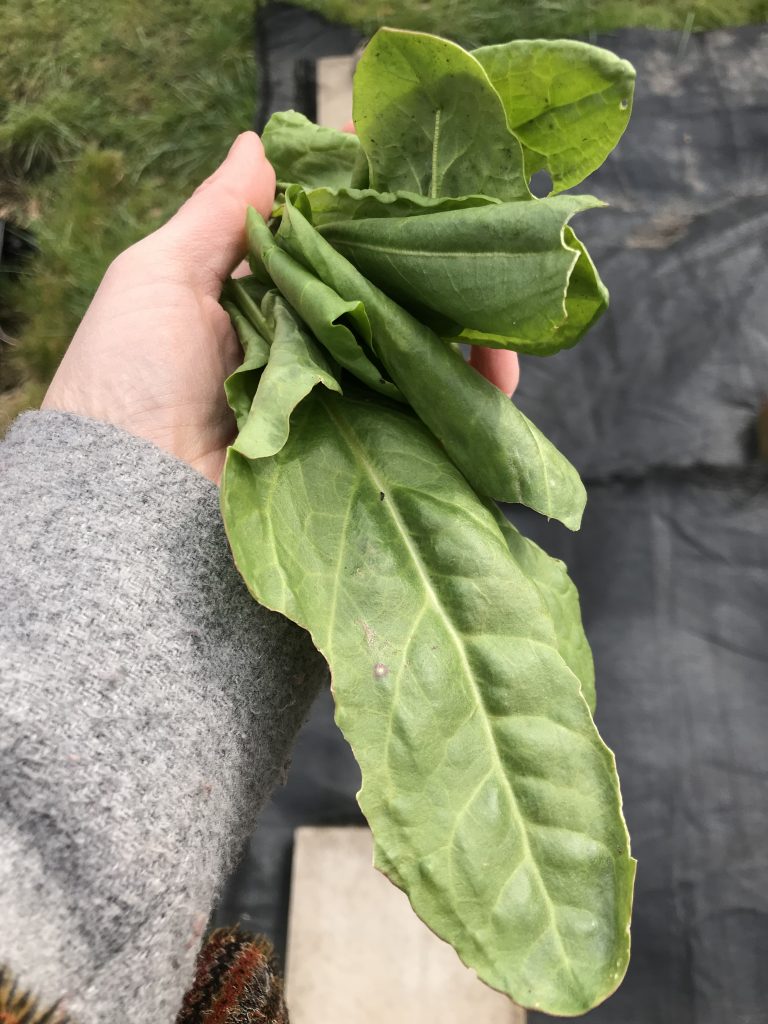 First picking of sorrel, for tossing with new potatoes and lashings of melted salted butter

Also this week:
Cooking and eating: A vat of bolognese, first season asparagus with salmon tart and new potatoes (phenomenally expensive but worth it), chicken marinated with yoghurt and ras al hanout, last of the simnel cake
Reading: Hidden Nature by Alys Fowler, a love letter to Birmingham’s urban waterways